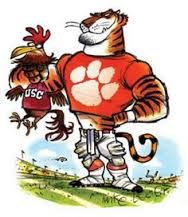 This year’s edition of the longest running rivalry in the south is all set as the Palmetto State gridiron titans meet on the turf inside Williams-Brice Stadium in front of a prime-time television audience nationwide on Saturday night.

The two schools have gone head-to-head for decades on in-state prospects from all over the recruiting footprint of the two schools, and both schools have had tremendous success in recruiting and developing countless Palmetto State stars in more than a century of competition on the football gridiron.

This season is a little different, as the Tigers and Gamecocks have had few head-to-head recruiting battles in the 2018 class, with the most notable being the Clemson commitment of Xavier Thomas, who was believed to be favoring the Gamecocks before deciding to commit to the Tigers. Since then, he has been a recruiting juggernaut as he leads the 2018 class in promoting the Tigers on twitter and social media. 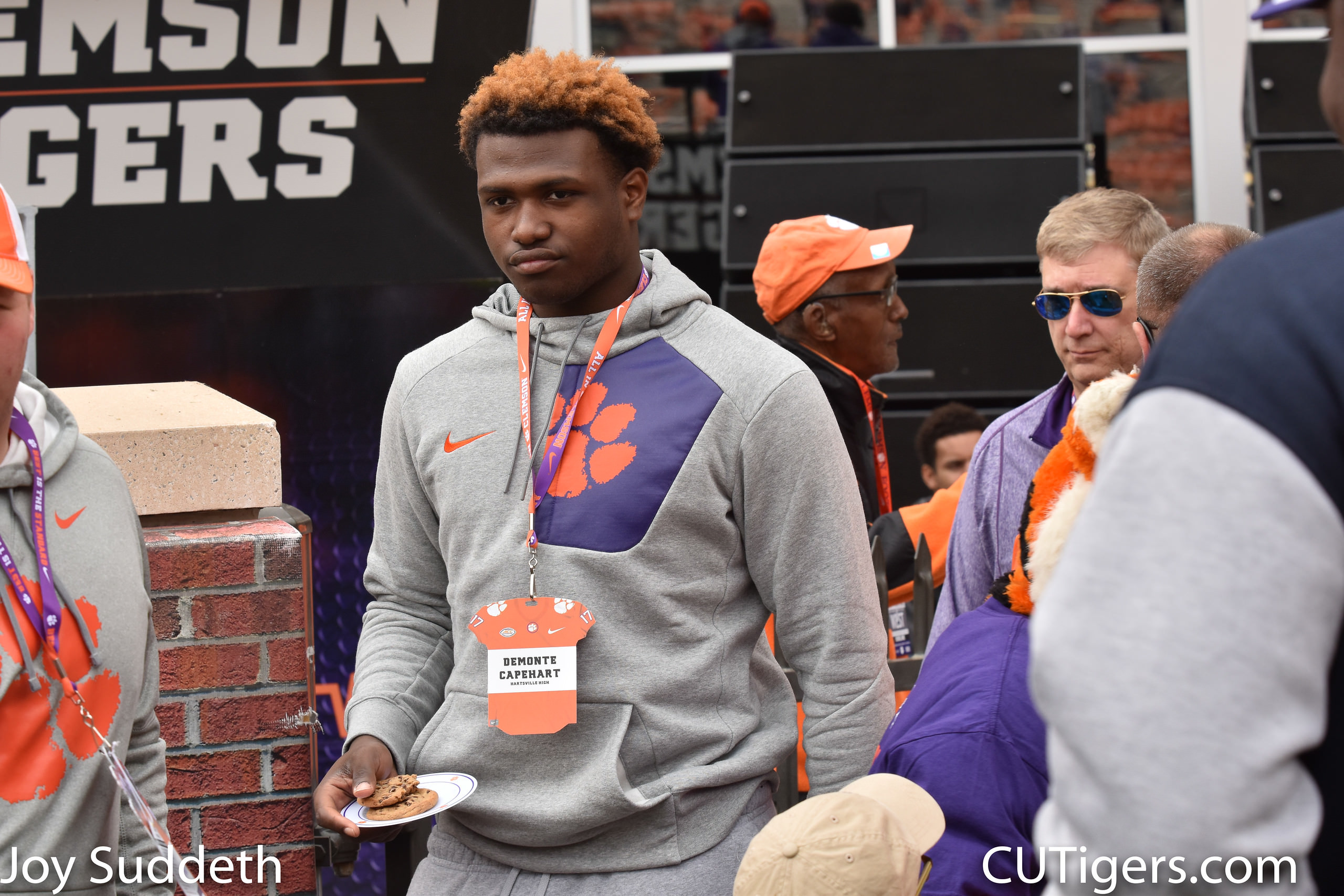 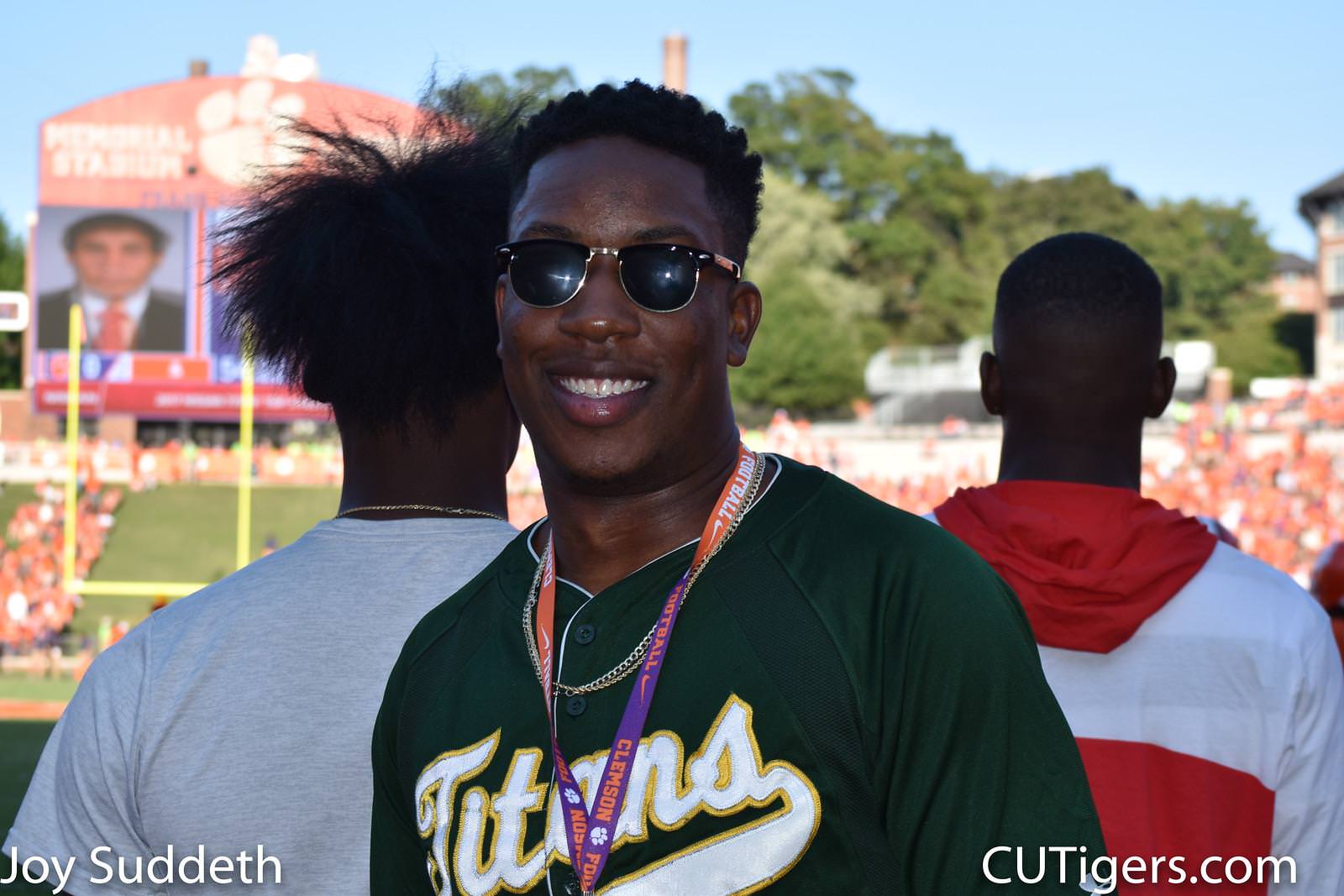 5-star 2018 DE K.J. Henry has both Clemson and South Carolina in his final five

As it stands today, the only player left on the Clemson board that has the Gamecocks in his final group would be K.J. Henry, and at this point we feel it’s Clemson in the lead with Virginia Tech trailing and everyone else (Alabama, Georgia and SCAR) all in the virtual rearview mirror at this point. Henry has exhausted his official visits to each school and is now set to announce his college of choice on December 20th before enrolling in January. Incidentally, K.J. has become fast friends with Clemson commit Xavier Thomas, and both players have visited Clemson together in the past on multiple instances.

With the 2018 class virtually wrapped up, this game on Saturday is all about the 2019 and 2020 in-state classes, with top-tier prospects from all over the state attending to see the much-improved Gamecocks from Columbia and the consistently nationally-relevant Tigers from Clemson go to battle once again. The annual tradition that is well known in these parts as the “Battle of the Palmetto State” meshes orange and garnett together over the green of the turf in the midst of players who will one day don these same colors one day. 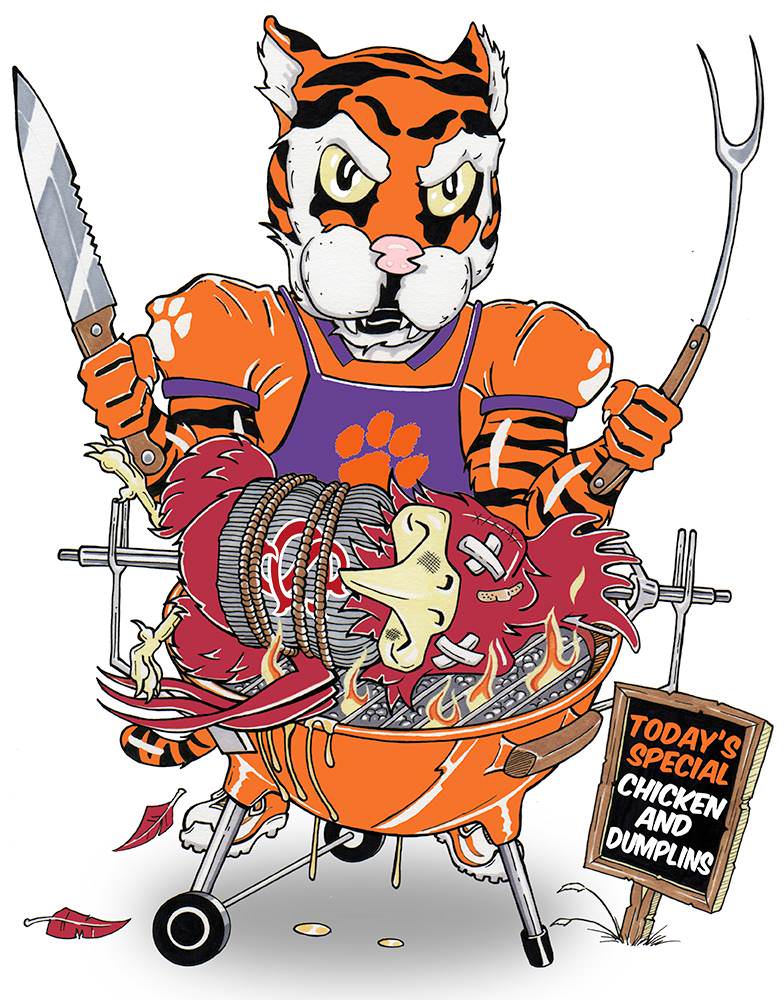 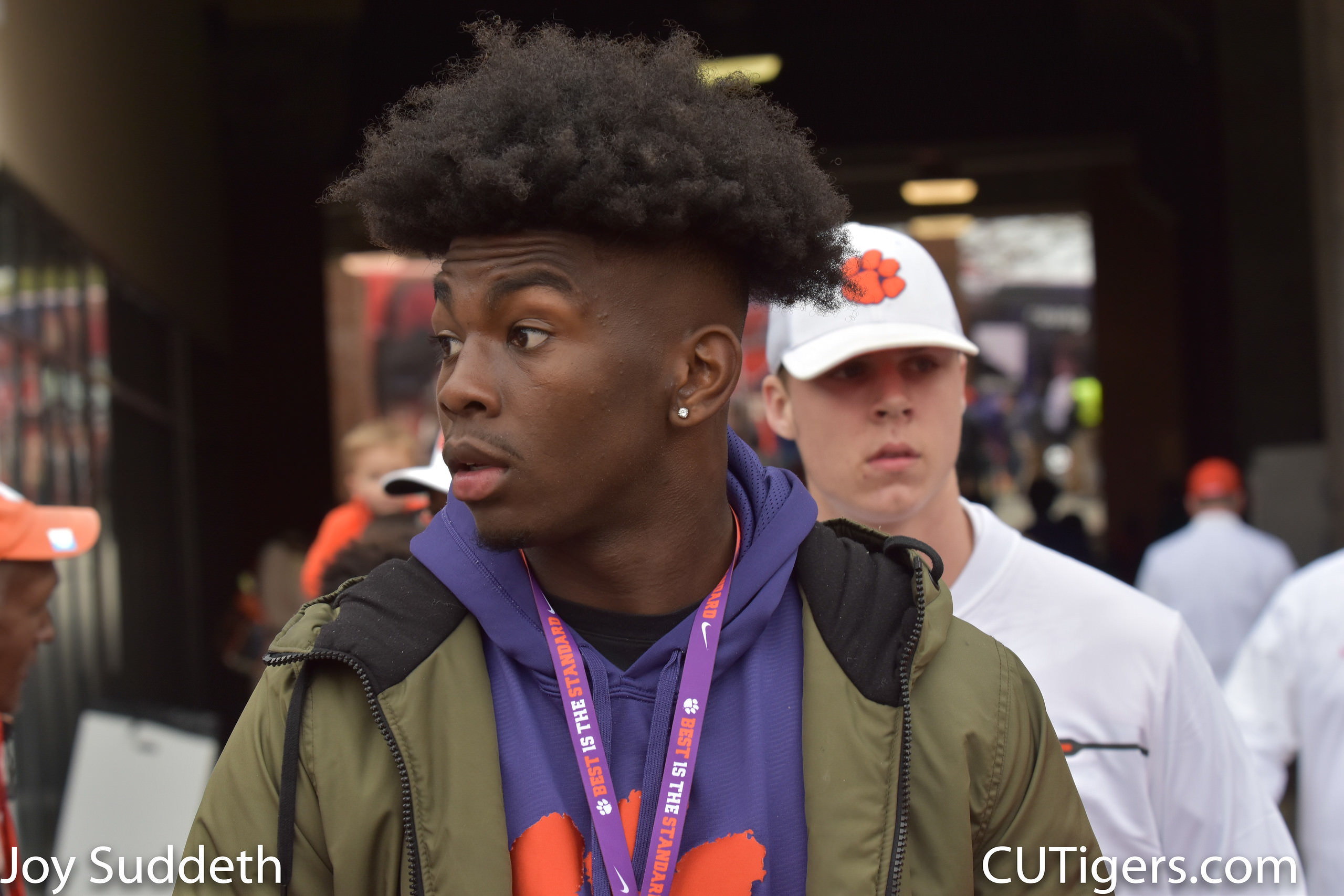 Lots of juicy news has been coming out of the big Official Visit weekend this past Saturday, as the Tigers crushed the cadets from The Citadel in front of a huge Military Appreciation Day crowd in Death Valley.

We had our ears to the ground all week since the game and gathered a lot of interesting info regarding those in attendance—most notably vis a vis 5-star attendees Justyn Ross, Tyreke Johnson and Cade Mays.

First off, let’s talk about Ross. The Tigers’ #1 WR target—and arguably top overall—for the 2018 class was in with his mom, who recently returned from overseas deployment, to take in the Military Appreciation Day ceremonies pre-game and also share his Official Visit to Clemson. We feel it’s the Tigers from the Plains and the Tigers by the Lake vying for arguably the nation’s best WR prospect. If you forced me today to predict which Tigers’ uniform he will wear, I would say Clemson will be the victor.

Now switch gears to the 5-star stud Tyreke Johnson, a DB out of Florida that took the time to visit the Tigers and was more than interested in the Clemson scheme and its familiarity with big defensive backs out of the Sunshine State, going back to the likes of NFL DB Jayron Kearse and current Clemson corner Trayvon Mullen. The staff rolled out the Orange Carpet to Johnson, who arrived just prior to kickoff and missed the pre-game festivities. With our knowledge of his recruitment and what we gleaned out of his visit, the Buckeyes of Ohio State are still leading, and the Clemson visit was nothing short of a “courtesy visit,” one you can chalk up to a player who likes to take all his officials.

However, there was a more than one potential commit up in the air that we discussed this past week, and we feel that things have heated up substantially with the Tigers and in-state OL prospect Jordan McFadden, so much so that we are seeing this recruitment potentially coming to an end before the end of the month. It’s a Clemson and Virginia Tech battle, as McFadden to this date still remains a VT commit. But folks, this one is starting to trend Clemson Orange very fast! Stay tuned, as this could go down real soon with info coming out of Dorman High, where former Tigers Charone Peake and Adam Humphries played, as does QB Ben Batson, son of longtime Clemson Strength Coach Joey Batson. 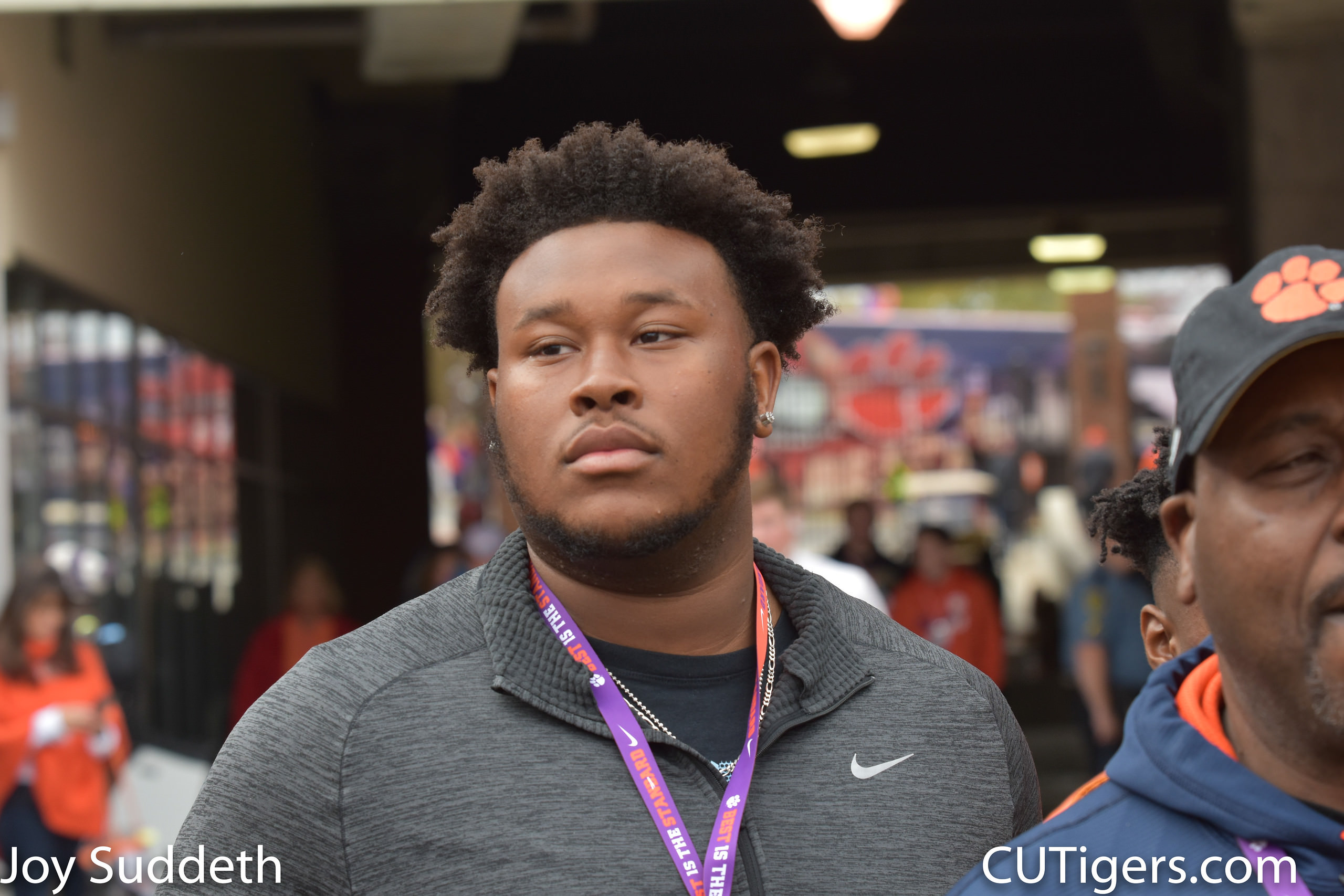 Now on to Lyn-J Dixon, the Tigers’ lone RB prospect left on the 2018 board to take an Official Visit, out of the Peach State of Georgia. Dixon was offered after a long recruitment by the Clemson staff, but not before the staff lost 5-star RB Zamir White to Georgia in early summer. Only then was the offer dispensed to Dixon. He had committed to Tennessee took an unofficial visit there back in the summer, but in the past month he has backed off his commitment and now has decided to revisit offers from Clemson, Alabama and a few others. Stay tuned here, as we are hearing the Clemson RB board may expand in the upcoming days! 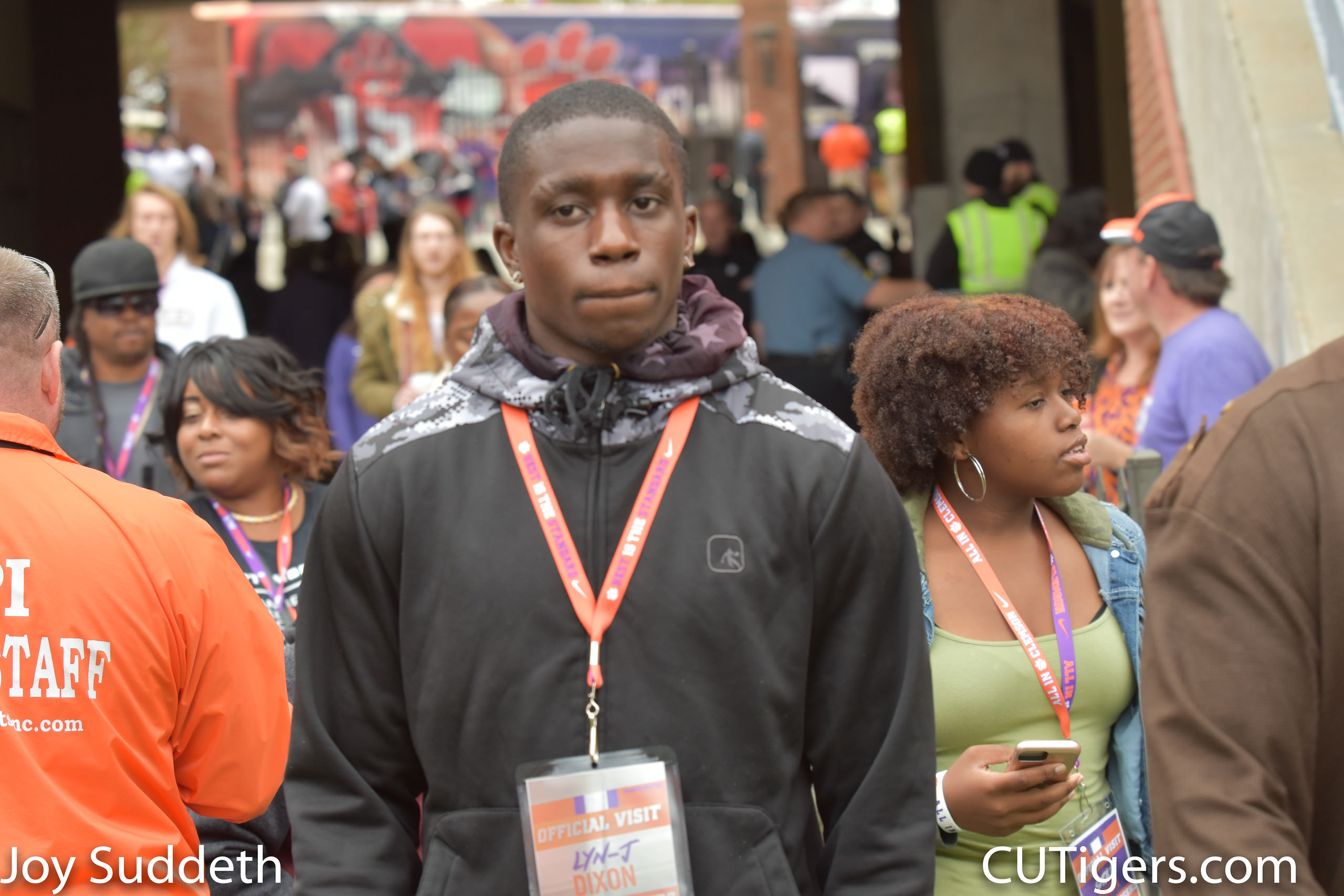 Enjoyed the game with The Family

Cade Mays left Tiger Town with two teams in the hunt for his services. Before Mays arrived on Saturday, it was a Clemson and Georgia battle for the 5-star OT. And as it stands today, it’s still the Tigers and Dawgs for the one-time Tennessee commit. Mays, who still has an Official Visit set up for Tennessee, may never see that come to fruition unless a new coach is named in Knoxville in the interim. The big man has a December 20th announcement date planned because he will enroll in January at his school of choice. 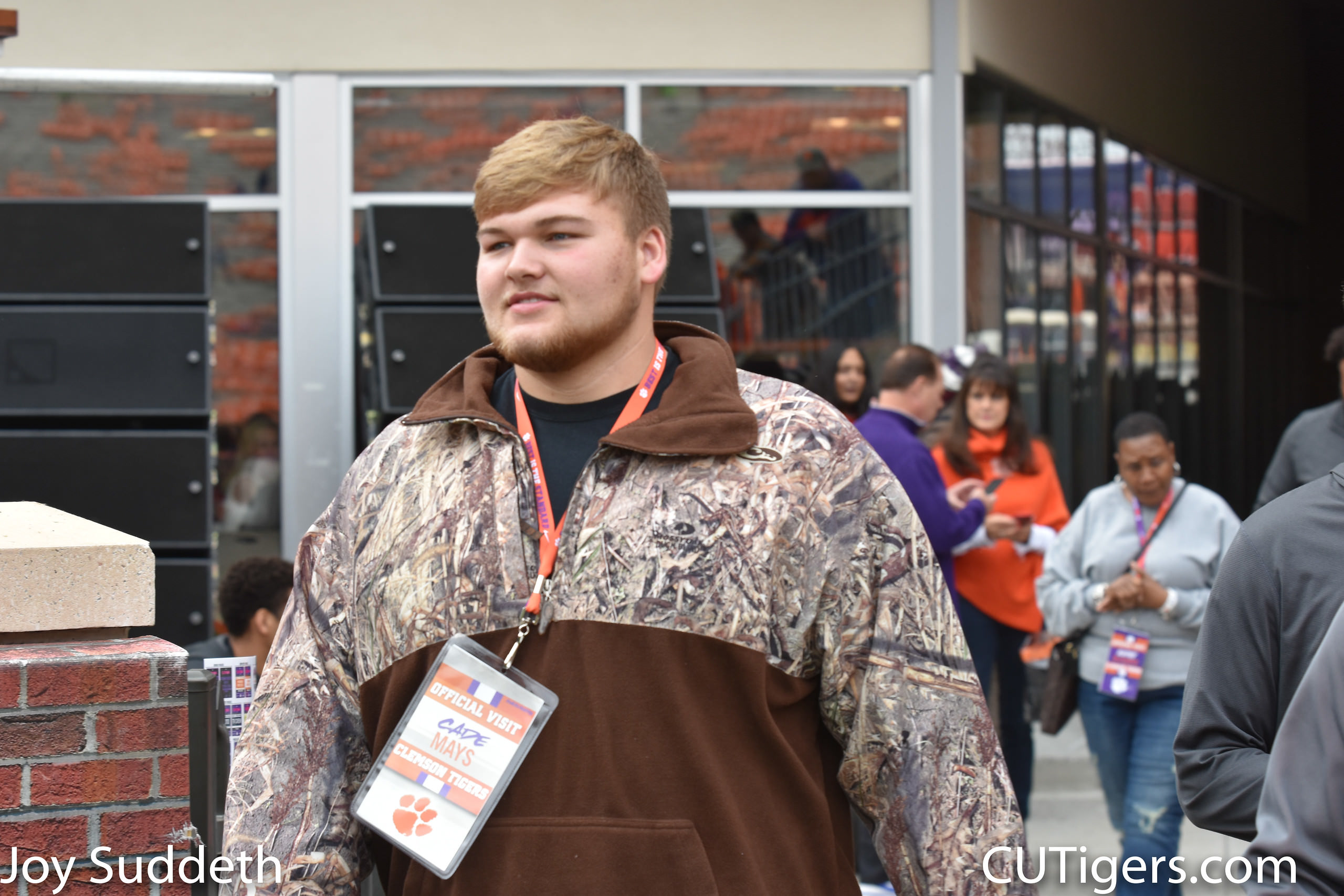 UGA is next up for the big man on the Official Visit docket, and if he comes out of that visit with things still even, then look for the in-home visits to be made by each team’s head man to swing the pendulum into the direction of one or the other.  50-50 is how we see it today, but Cade made a lot of friends among the 2018 Clemson commits during his stay in Tiger Town this past weekend, and 5-stars tend to gravitate toward playing with other 5-stars. So stay tuned right here to the Recruiting Radar for all your 5-star updates in the next few weeks!

Enjoyed being in Death Valley today

Had a great time @ClemsonFB this weekend. Thanks to the Clemson football family for hosting me pic.twitter.com/Q3PtppDjzI

Awesome visit at Clemson today! Thank to coach Swinney and his staff for having me out

Had a great visit at Clemson today

Great visit to Clemson this week. Thank you to all of the coaches and players that made this experience special. Big things to come! #ALLIN pic.twitter.com/mGVdaLt767

Had another great visit at Clemson today! Always an incredible experience! #ALLIN 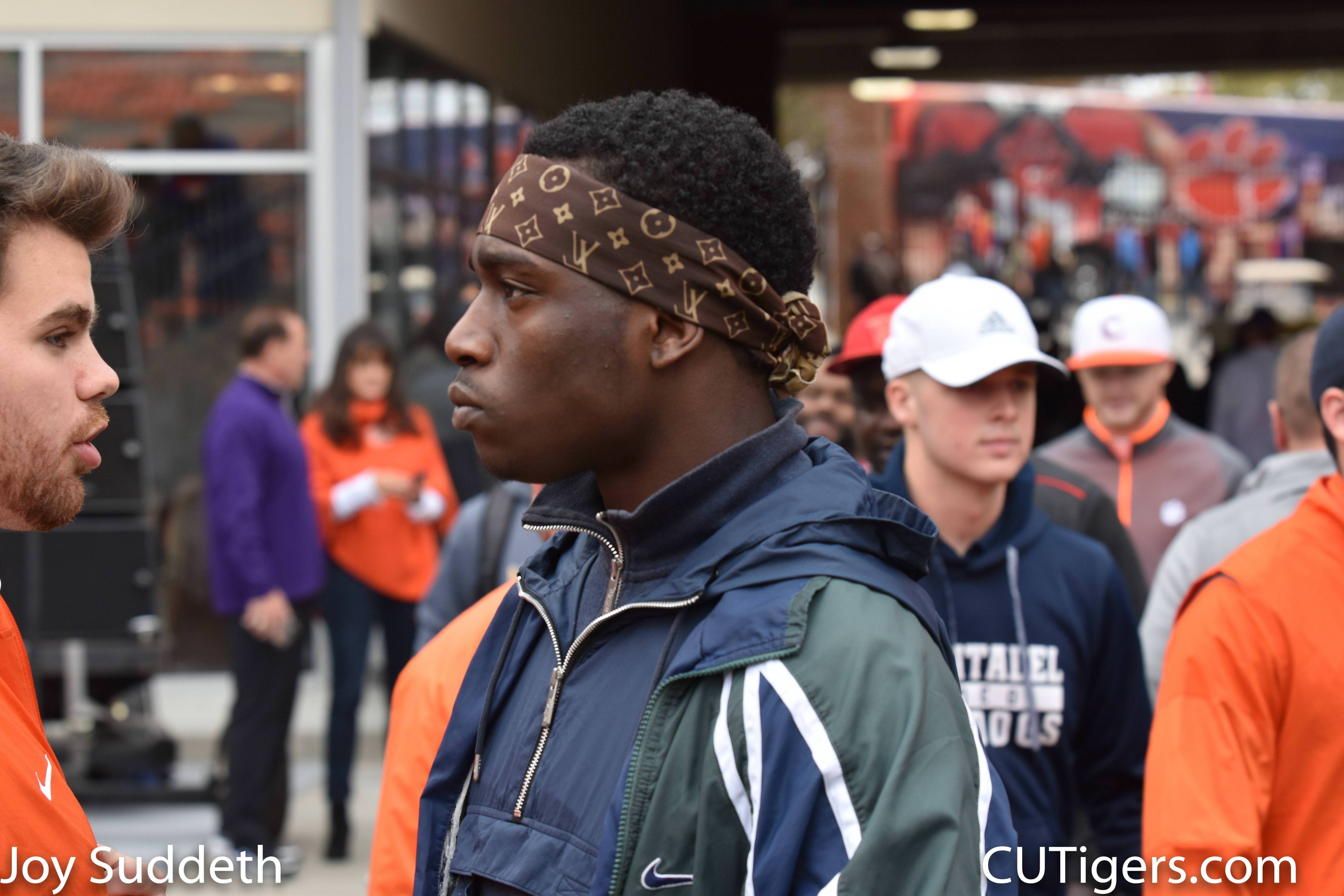 USA Today released its annual High School All-American Team, and the Tigers’ 2018 class is well represented, with no less than three commits on the First Team!

This year’s Clemson recruiting class can claim Trevor Lawrence (QB), Xavier Thomas (DE) and Derion Kendrick (ATH/WR) all being named First Team All-Americans, to lead all schools. See the list below, and note that the Tigers recruited no less than 9 of these listed players inside their 2018 recruiting boards, landing 3 of them! It’s a testament to how elite Clemson is in the recruiting world today.

December 20th is s date that could bring an early Christmas to Clemson fans and the staff, as two of the Tigers’ biggest remaining targets are set to announce on that date.

5-star phenoms Cade Mays and K.J. Henry are both set to announce their college of choice on that date, and the Tigers look to factor into both of these players’ decisions. As of today, if you asked us to pick based on intel we have to date, Clemson fans will be ecstatic by the end of that day. But this is recruiting, and the time on the calendar between now and then can create story lines that can spin out 180 degrees, so stay tuned here to CUTigers.com for all your Mays and Henry updates as we quickly approach decision day for both of these top-tier targets!

Thankful to be able to play this amazing game. If y’all don’t have anything to do tomorrow, please come watch us as we play at Greer for upper state. pic.twitter.com/JyV2SqArUQ

Happy Thanksgiving to everyone, especially those who are serving this country and can’t be with their families today

Thankful to live, learn and play at the best place on earth...

Enjoyed being in Death Valley today

She loves our new home