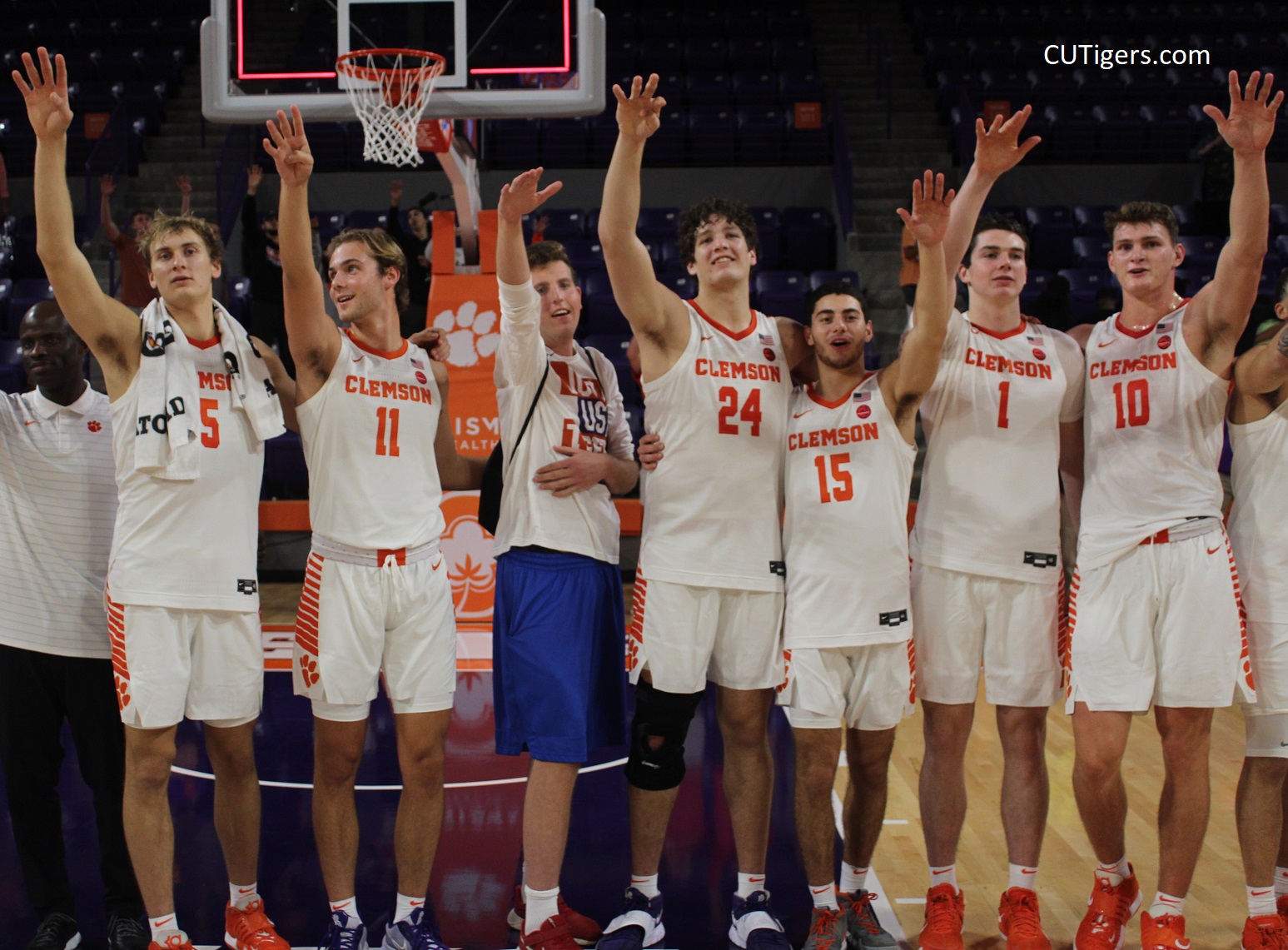 Photo by Trevor Groves
CLEMSON, SC - The Tigers got off to a slow start on Tuesday night, scoring just 24 points and trailing PC by 8 at the half. Hunter Tyson was the lone bright spot in the first half, scoring 11 of the Tigers' 24 points after scoring just 4 points in the exhibition last week. I asked Brad Brownell on Monday if Tyson would have to be a consistent scorer for the Tigers this season, and he delivered when they needed him. He finished with 14 points. Sophomore PJ Hall was scoreless in the first half after going 10-11 for 21 points in the first half of last week's exhibition.
The Tigers came out of the locker room like a different team, showing much more urgency on both ends of the floor. They held PC to just 21 points in the second half, and Dawes caught fire, scoring 16 points in the half to give him 21 in the game. He was 4-9 from beyond the arc after going 3-7 from the field for just 8 points last week. Dawes and Tyson each had a few big offensive games last season, but they will both need to be more consistent scorers this season if the Tigers are going to make the NCAA Tournament. Hall got his offense going in the second half as well, scoring 6 points with a 3-pointer. Transfer starter David Collins scored 10 points in the second half to finish with 14. He should have scored 20, but he was just 3-9 from the free throw line. Collins is great at penetrating and getting to the line, but he is a woeful free throw shooter and needs to improve that part of his game or it's going to cost the Tigers in some close games. He was just a 56% free throw shooter last season and is 4-12 in his first two games as a Tiger. Freshman Ian Shieffelin played just 5 minutes and was scoreless. I was expecting to see much more of him after he went 6-7 for 13 points in his 12 minutes last week.
The Tigers went into the game somewhat blind, not knowing what PC would throw at them in the opener. They had a tough time with PC's full-court pressure and committed 14 turnovers in the game. However, they were still able to score 40 points in the second half despite just 6 points from Hall, and that is encouraging for the offense. Defensively, they held PC to 3-24 from beyond the arc.
It was a nice turnout from the students on a Tuesday night during football season, and Brownell made note of his appreciation for the fans after the game. The Tigers, who are still trying to find some cohesion with their personnel groupings, have Wofford up next on Friday night in Littlejohn, and the Terriers are never an easy out. Post-game interviews and highlights are below!
MORE CLEMSON FOOTBALL COVERAGE HERE