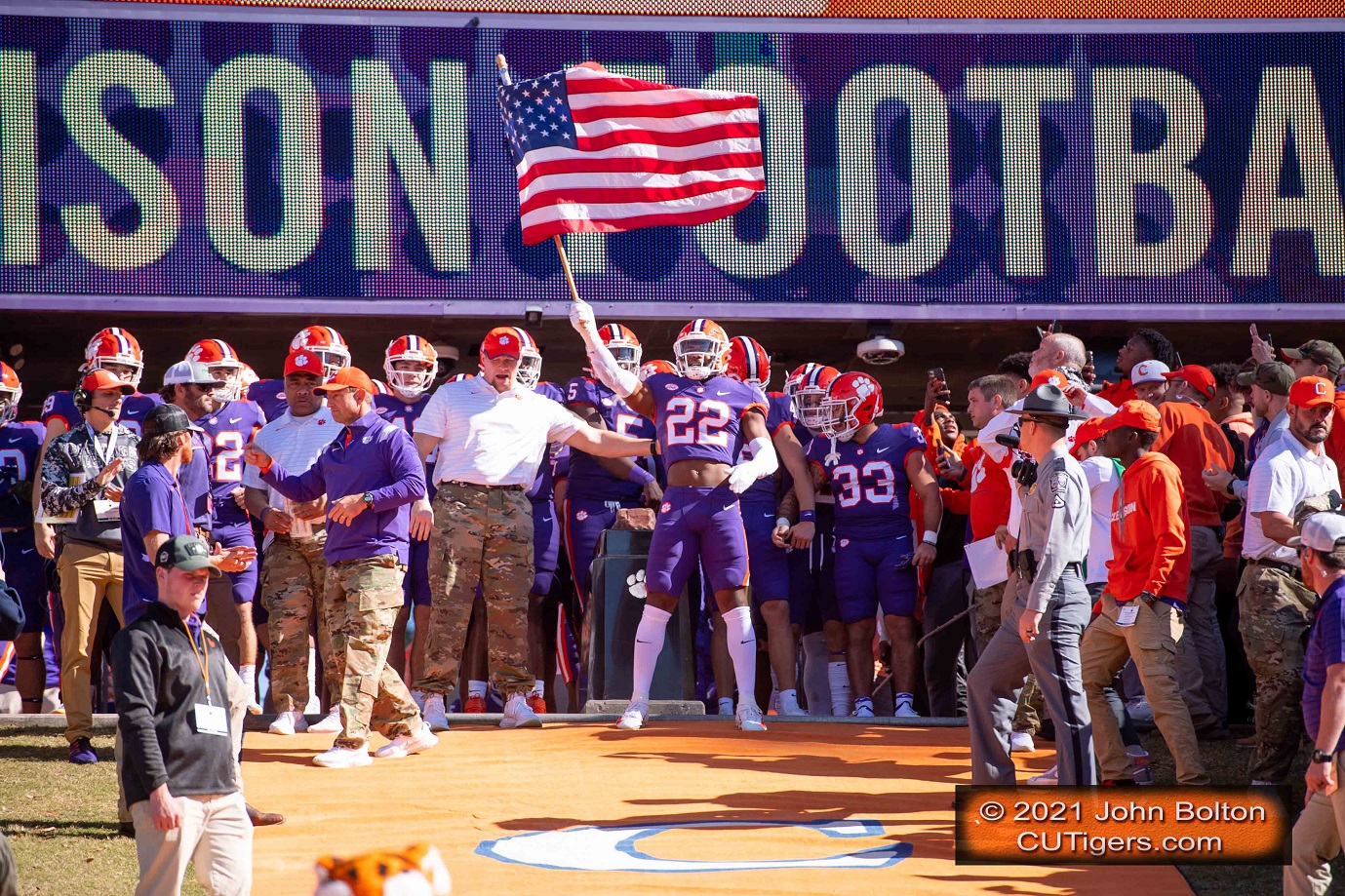 Photo by John Bolton
CLEMSON, SC - Well this is something we've never seen from Dabo before. He actually sat Shipley and Pace in order to protect them from being injured, knowing he wouldn't need them to beat UConn. There have been dozens of games over the years in which many thought Dabo ought to hold players like Trevor Lawrence or Travis Etienne out against inferior opponents to protect them from injury, but he wouldn't do it. Sure, he'd pull them out in the second half after they had a big lead, but he would never take an easy win for granted and bench them the entire game! Dabo has always said that you can't coach with a fear of injuries and trying to avoid them. Well, it appears as if that philosophy has changed in his 13th full season as the head coach. Dabo told me on Wednesday night that Kobe Pace, who suffered a concussion in the first half at Louisville last week, would be ready to play on Saturday. He also gave no indication that there was anything wrong with Will Shipley, who was not listed as unavailable on our pregame report. Yet neither player took a snap in the game. When I asked Dabo about it after the game, he said that Pace didn't practice all week and Shipley had hurt his foot. But that's not what Dabo told me on Wednesday. They were both dressed, and Dabo said that they could have played "in an emergency," but in my opinion, they would have both played if it had been any ACC opponent rather than a 1-8 UConn team. I believe Dabo didn't want to risk them getting injured in a game he knew he would win easily without them. And who could blame him? NFL coaches have done this for years after clinching playoff spots, and college coaches have done it too. And the way this season has gone for the Tigers, how could it not have gotten in Dabo's head? Every week, it's been at least one new starter going down with an injury. Last week, it was Pace with a concussion and Booth with a stinger. Today it was Justyn Ross. It is interesting, though, that after 13 seasons of throwing caution to the wind and playing the Trevor Lawrences and Travis Etiennes when there was literally no need, Dabo has pulled a 180. It's a direct commentary on how insanely plagued the Tigers have been with injuries this season, possibly more than any team in history. 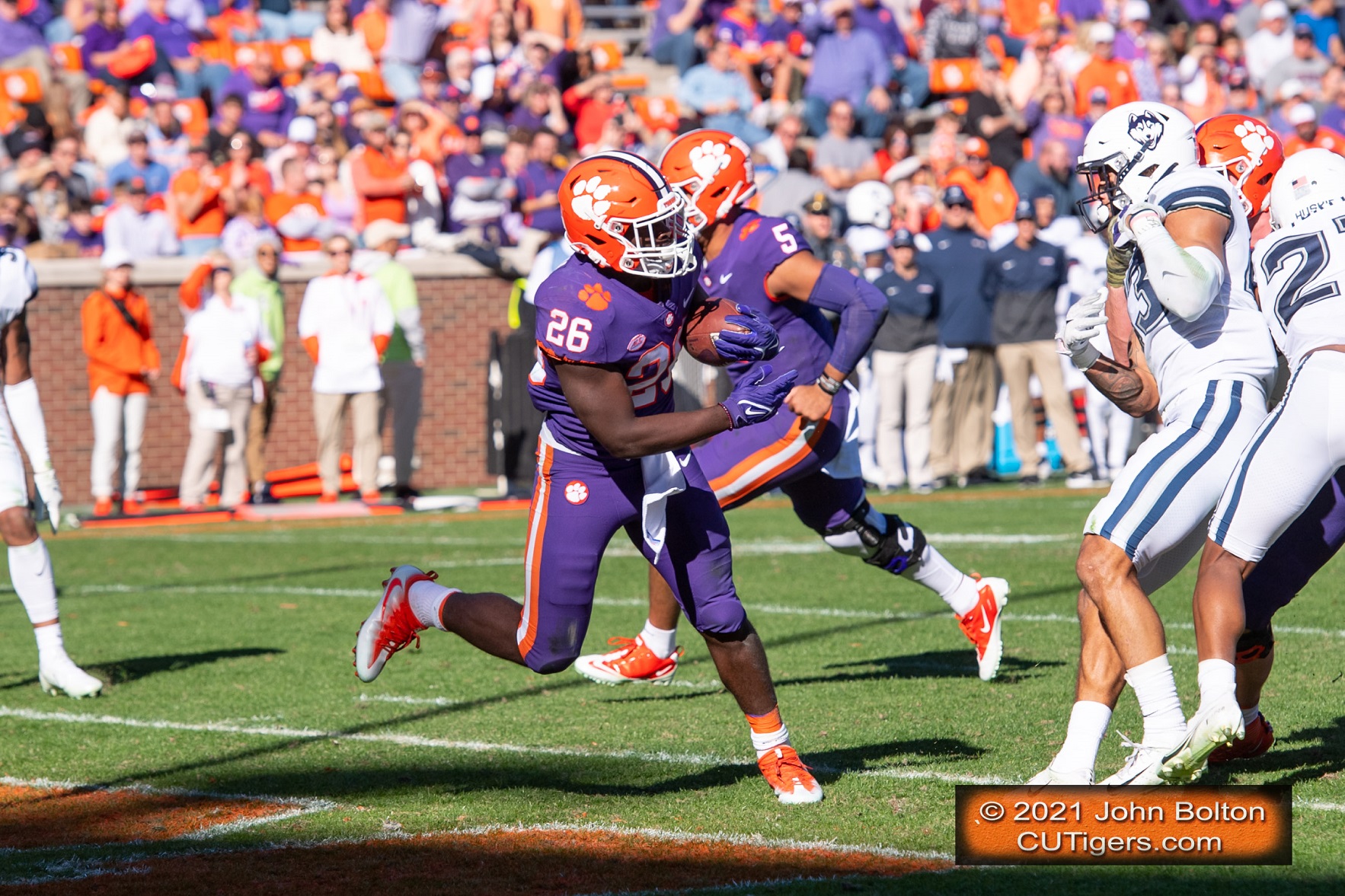 With Shipley and Pace out, Rencher and Mafah got to show what they could do, and it wasn't vey impressive. Against a bad defense, Mafah averaged 2.9 yards per carry for 49 yards and a touchdown. Rencher averaged 2.6 for 37 yards and fumbled on the goal line for a touch back in the fourth quarter. The good news is that Shipley and Pace got some rest and will be ready to go against Wake next. The bad news is that this offense is still very much a work-in-progress and could have used a game like this as a tune-up for next week's crucial game! It's a double-edge sword, so let's hope Dabo made the right call.
The game certainly had a strange start. UConn won the toss and elected to receive the ball, which is an absolute first. Every other opponent that's won the toss in Death Valley this season has deferred and put the Tigers on offense first. Well, that deviation certainly paid off because after muffing the kickoff, the UConn return man took it 100 yards for a touchdown. How many times have we seen that happen? It's like it throws off the timing of the entire coverage unit. Dabo told me after the game that they have a player designated to prevent just that from happening, but he was overzealous and wasn't at home to make the tackle. Then in the fourth quarter, the exact same thing almost happened! The return man muffed the kick and took it 76 yards to the Tigers' 24! In that case, it was the backups in on coverage, and they just did a lousy job against a very dangerous return man. If I were UConn, I'd tell the return man to drop every kickoff for the rest of the season! The first two touchdowns of the game would come from special teams, as the Tigers would take a 10-7 lead on a fake field goal, run in by holder Will Swinney. 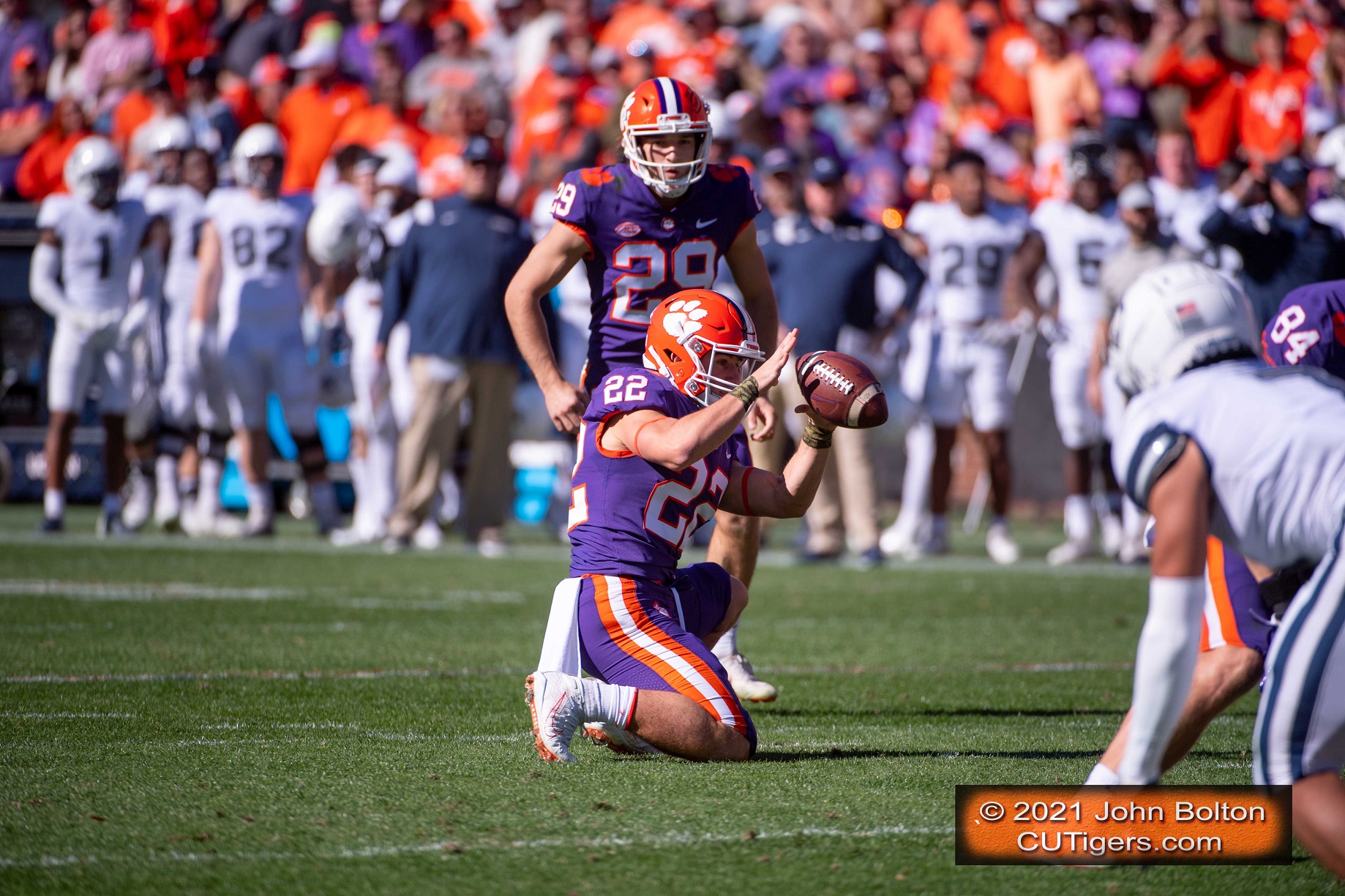 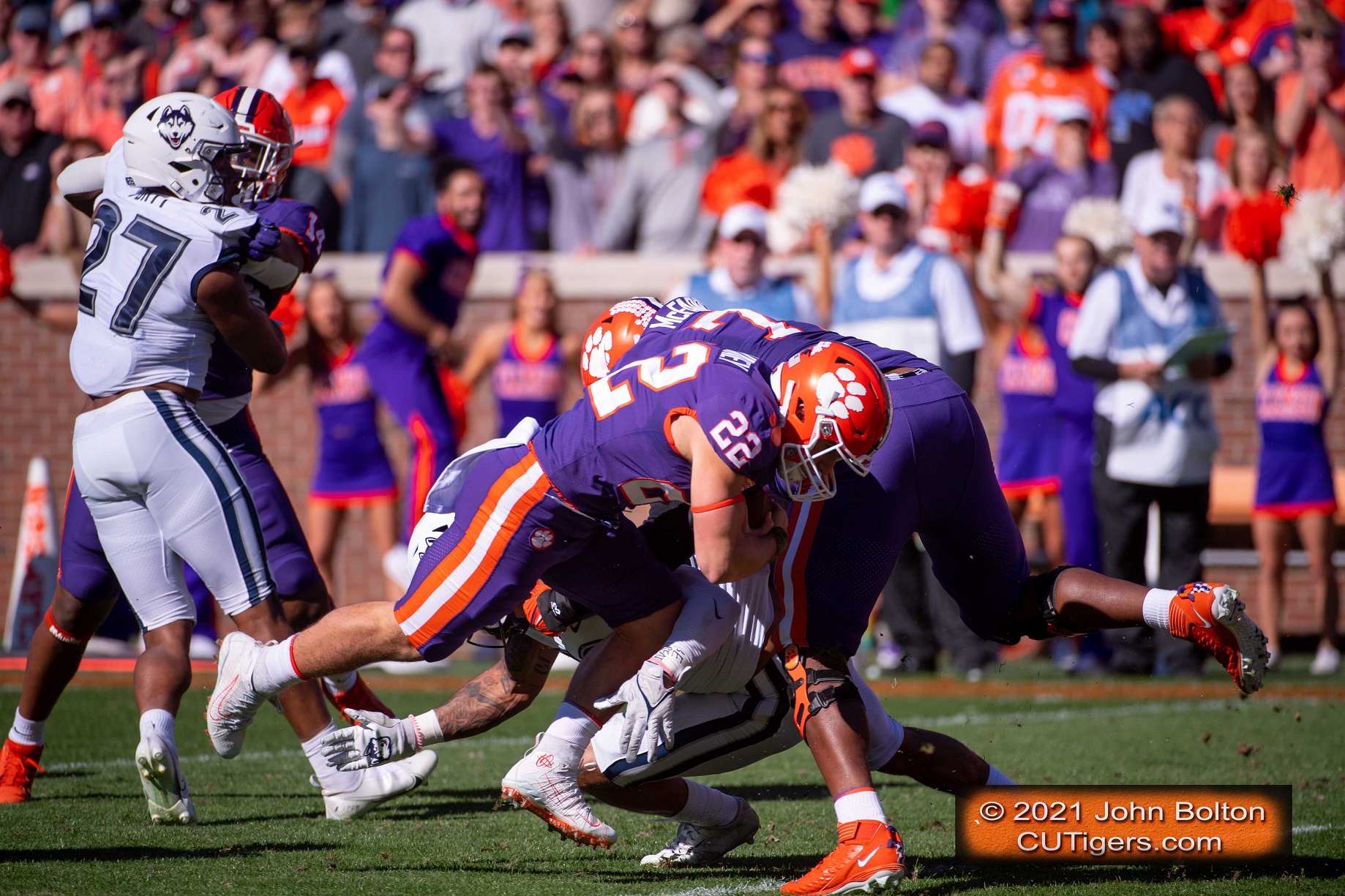 The second big kickoff return by UConn didn't hurt the Tigers, even after a penalty placed the ball at the 12 yard line, because the backups were able to keep the Huskies out of the end zone and get a turnover on downs. And defense was the story of the day for the Tigers. They were as good as they've been all season against an albeit bad offensive team. Even with the backups in for much of the game, the Tigers shutout the Huskies' offense and allowed just 99 total yards. UConn got more yards than that and their only score on the opening kickoff, for Pete's sake! The Tigers had 6 sacks for the second straight game at home and came up with 2 interceptions. Andrew Booth was out with a stinger, and Sheridan Jones stepped up in a big way at corner. He was responsible for one of the interceptions and almost came up with a fumble recovery on a backwards pass but was ruled out of bounds. Mario Goodrich had the other INT. 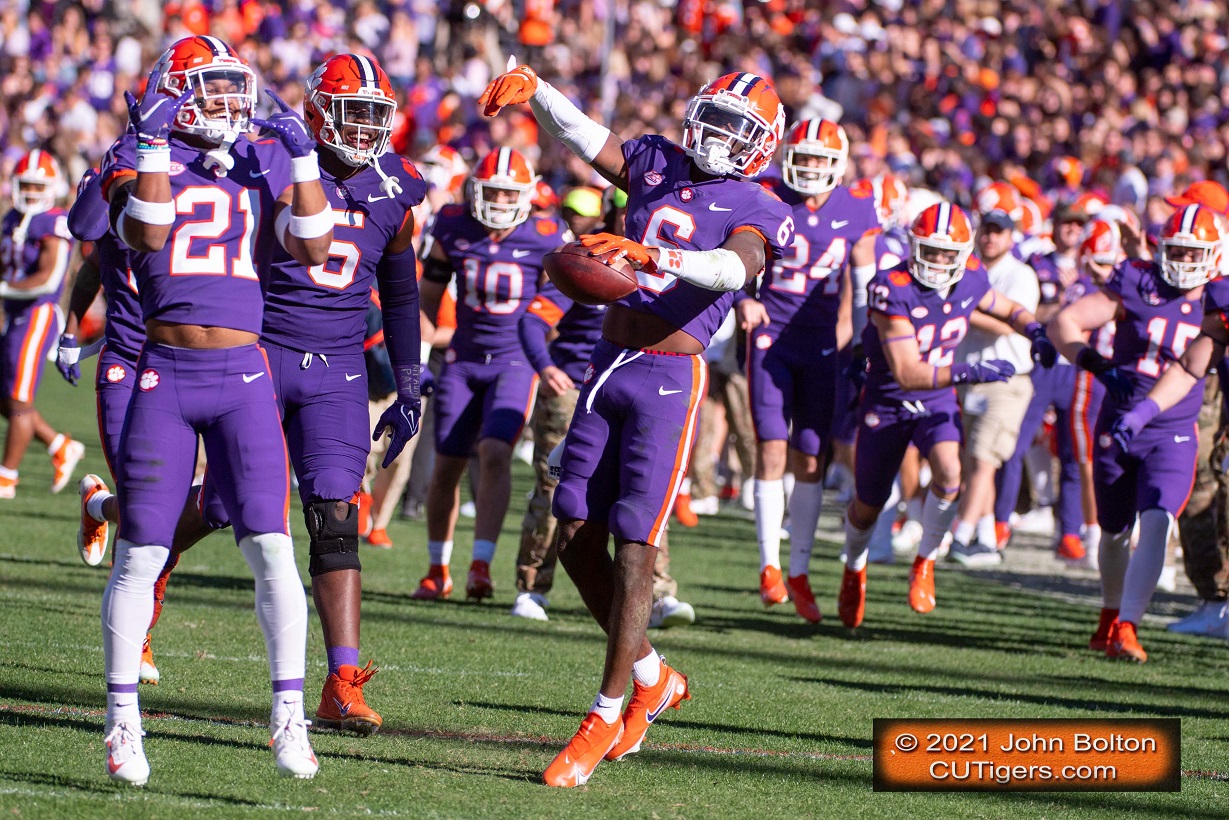 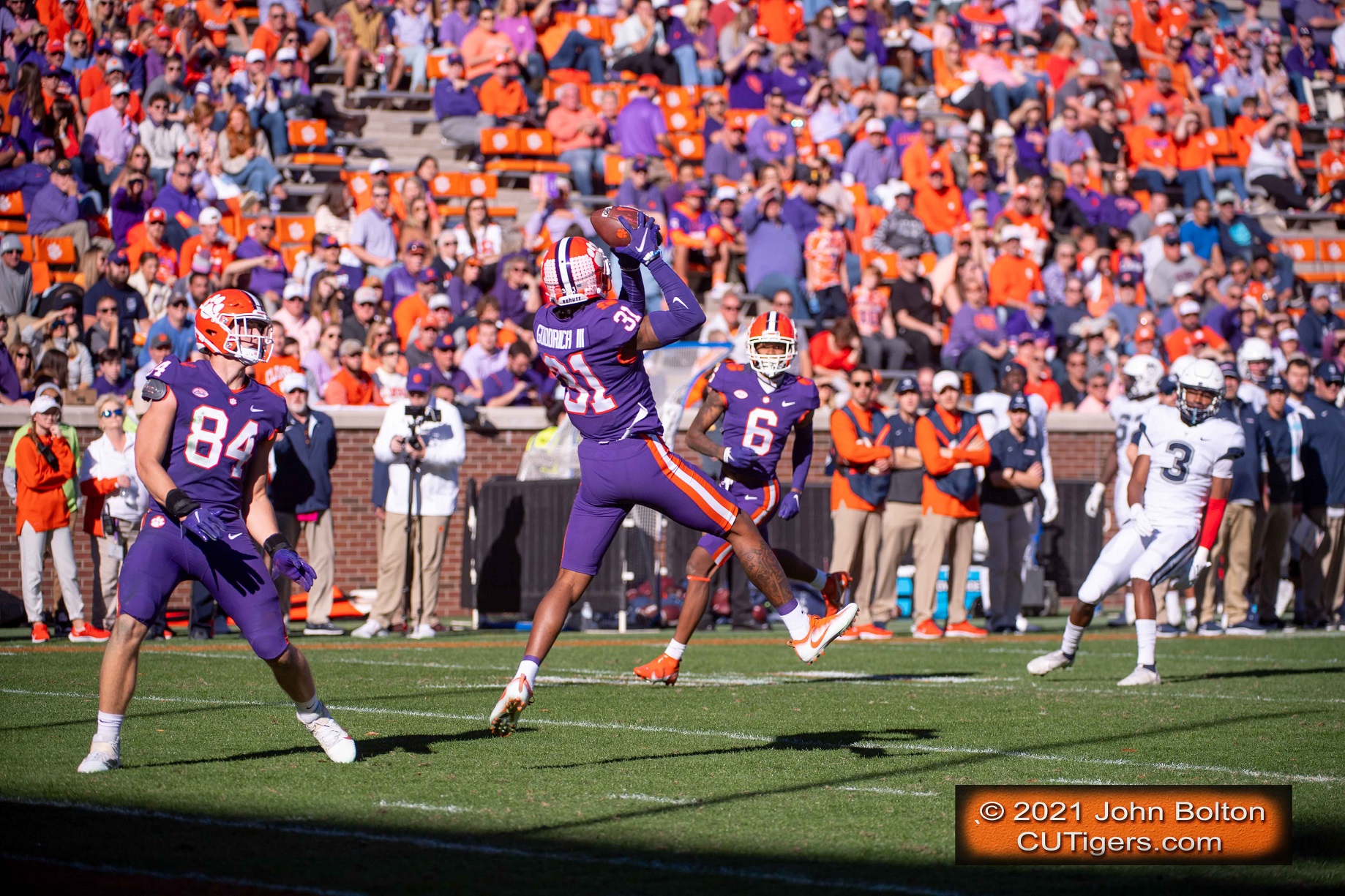 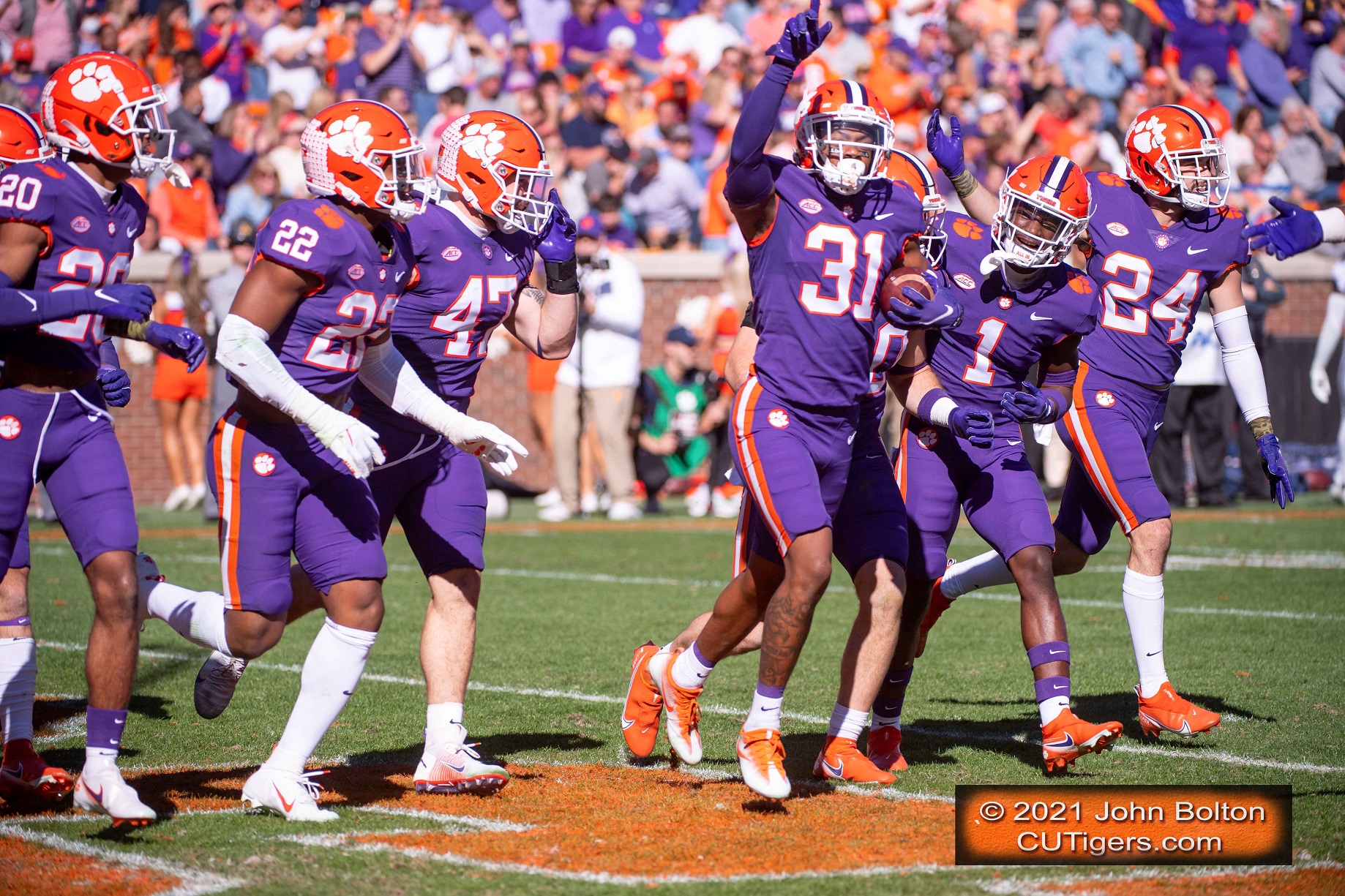 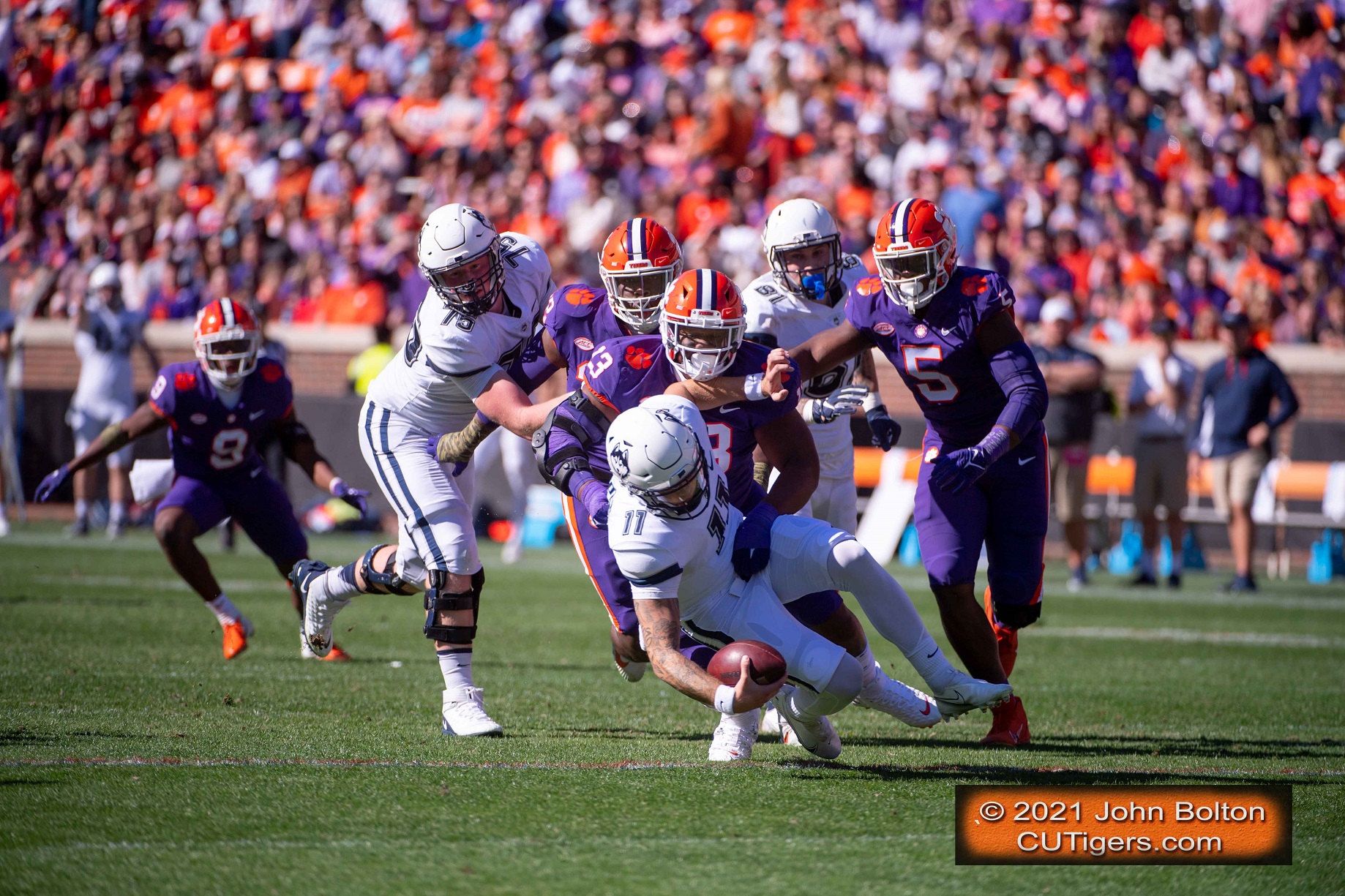 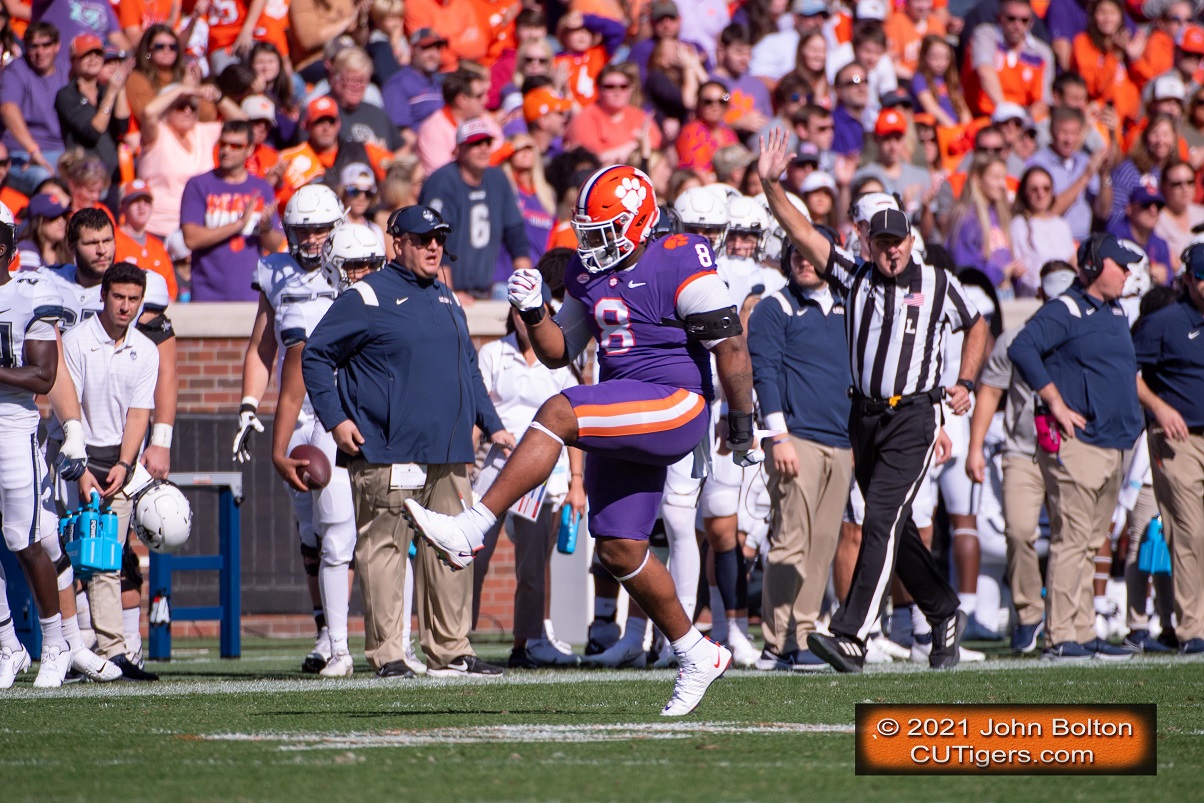 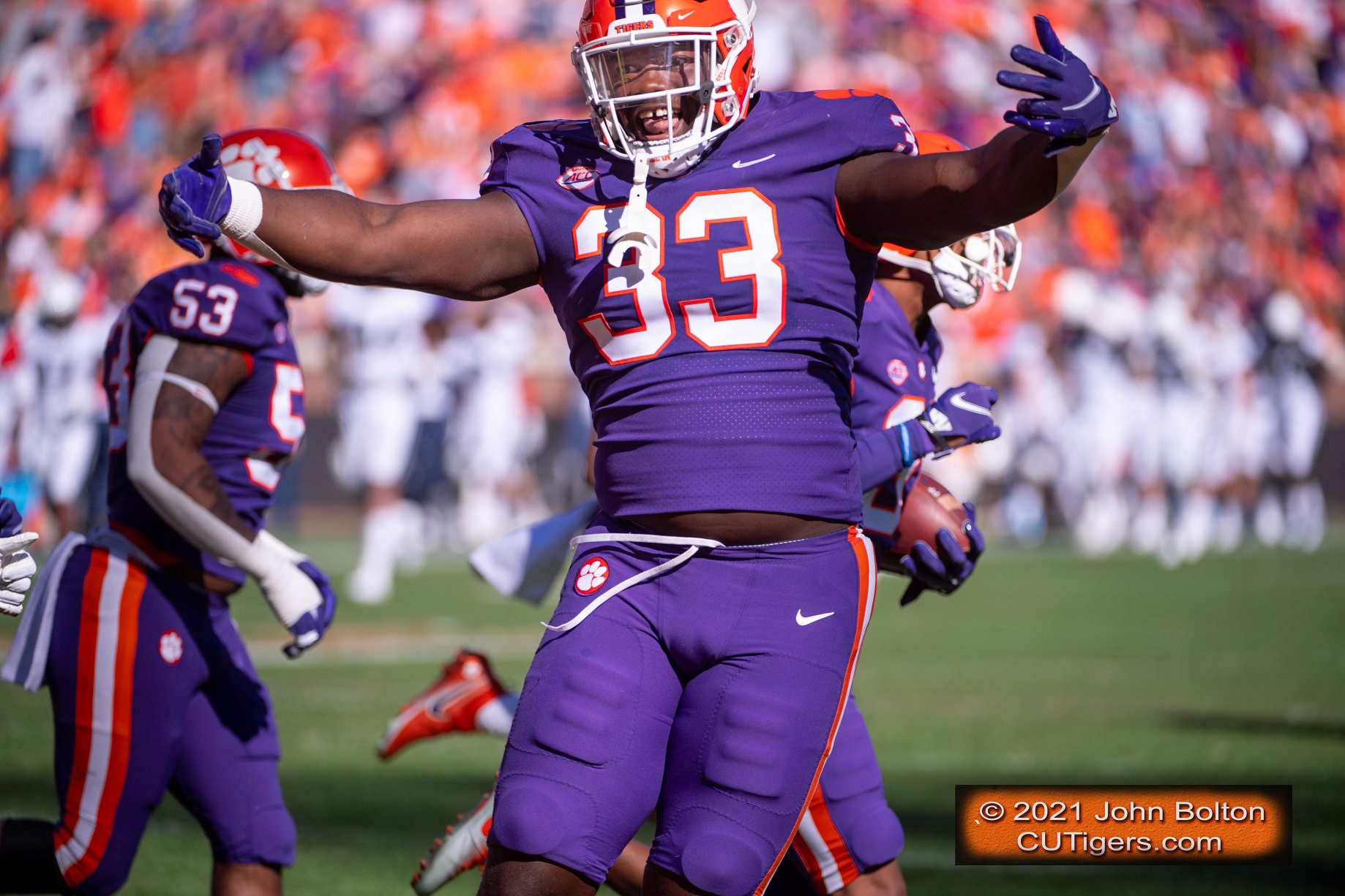 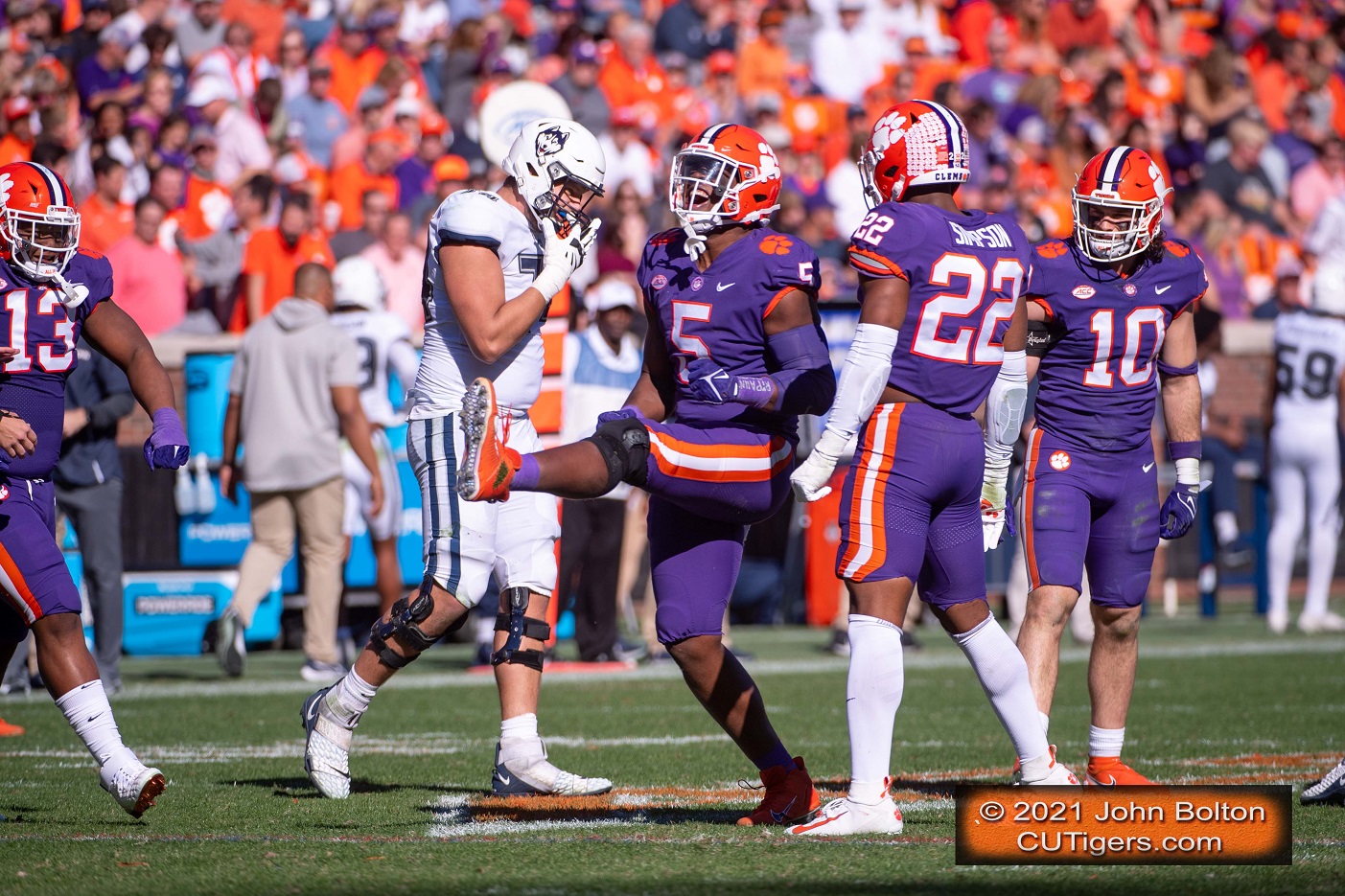 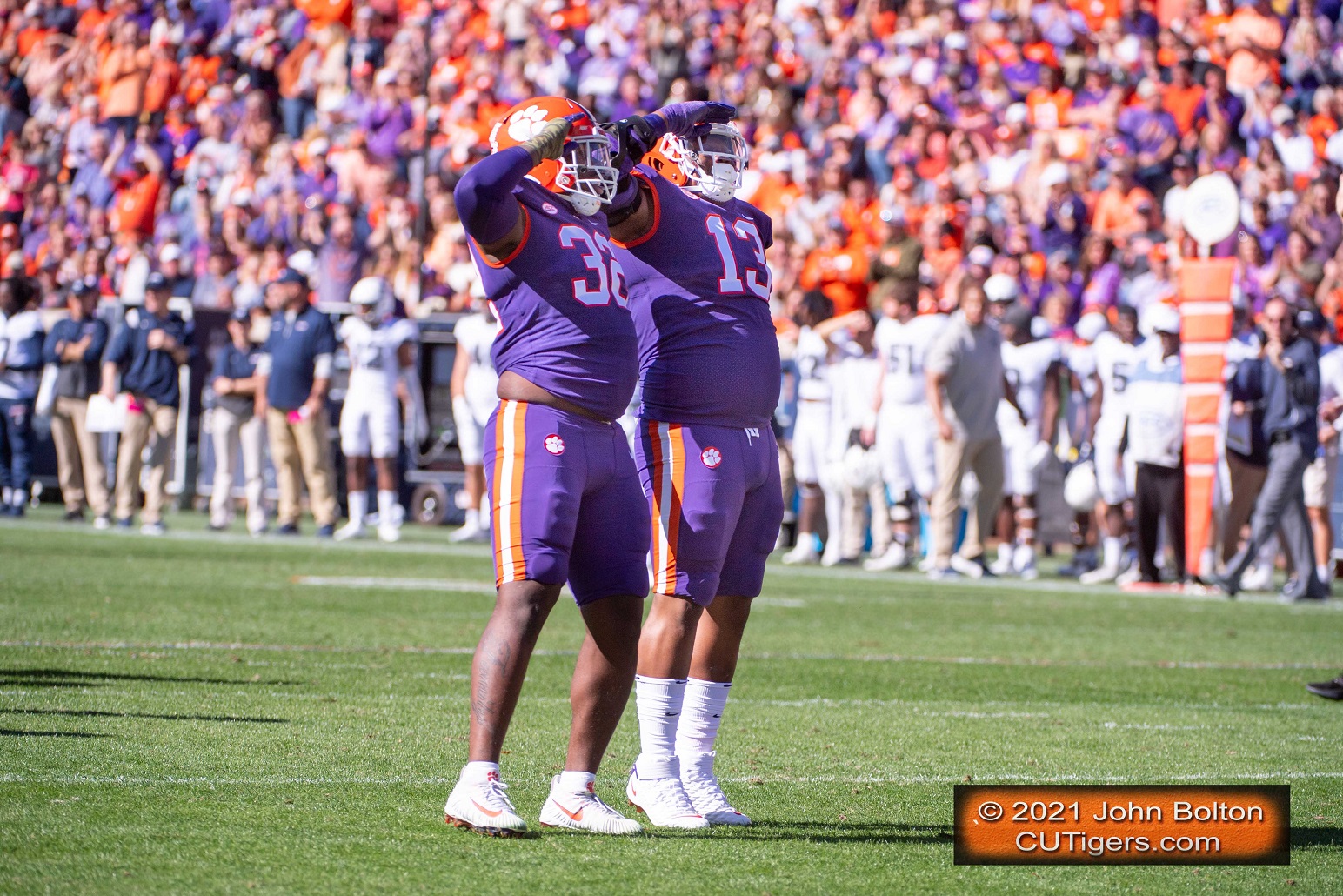 On offense, Taisun Phommachanh was inserted at quarterback much earlier than expected against his hometown team. I was expecting to see him in the second or third quarter after the Tigers had a substantial lead, but Dabo inserted him in the middle of a possession at the end of the first quarter. After a first down thanks to a pass interference call, Taisun relieved DJ. After a couple short runs, Taisun threw a beautiful 33-yard pass to freshman Dacari Collins and then ran the ball into the end zone on 1st and goal from the 3. It was serendipitous that Taisun was able to complete a big pass and get a score so quickly because he hurt his throwing shoulder and would not return. Taisun's little brother, Tyler, is a freshman backup QB for UConn. He started a couple games this season but injured his leg against Vandy and will miss the rest of the season. However, his coach let him make the trip down to see his big brother play, and Taisun had dozens of family and friends in the stands, so that was a nice treat for the Phommachanh clan. 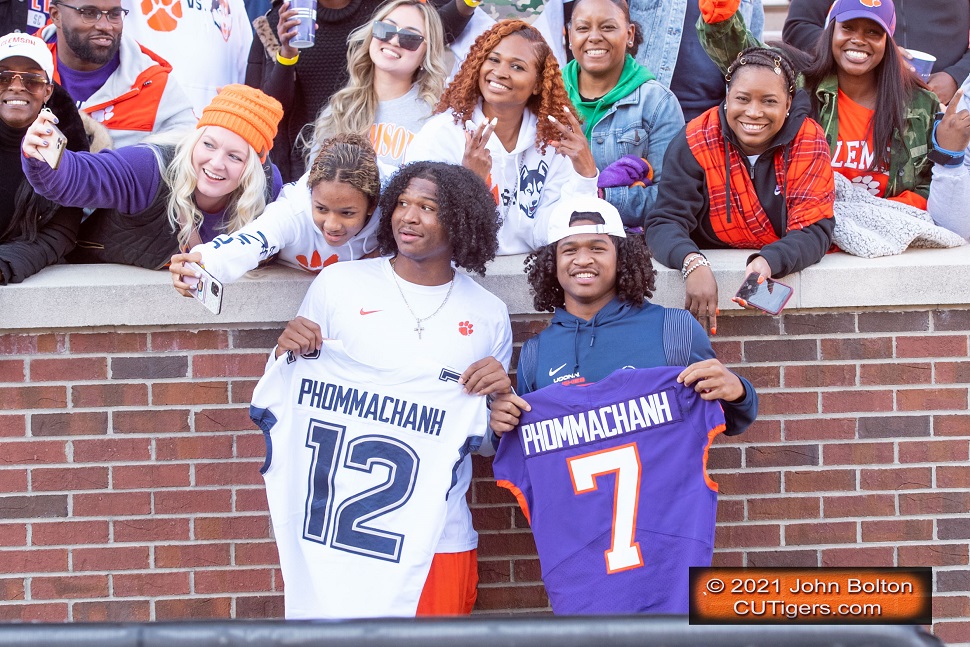 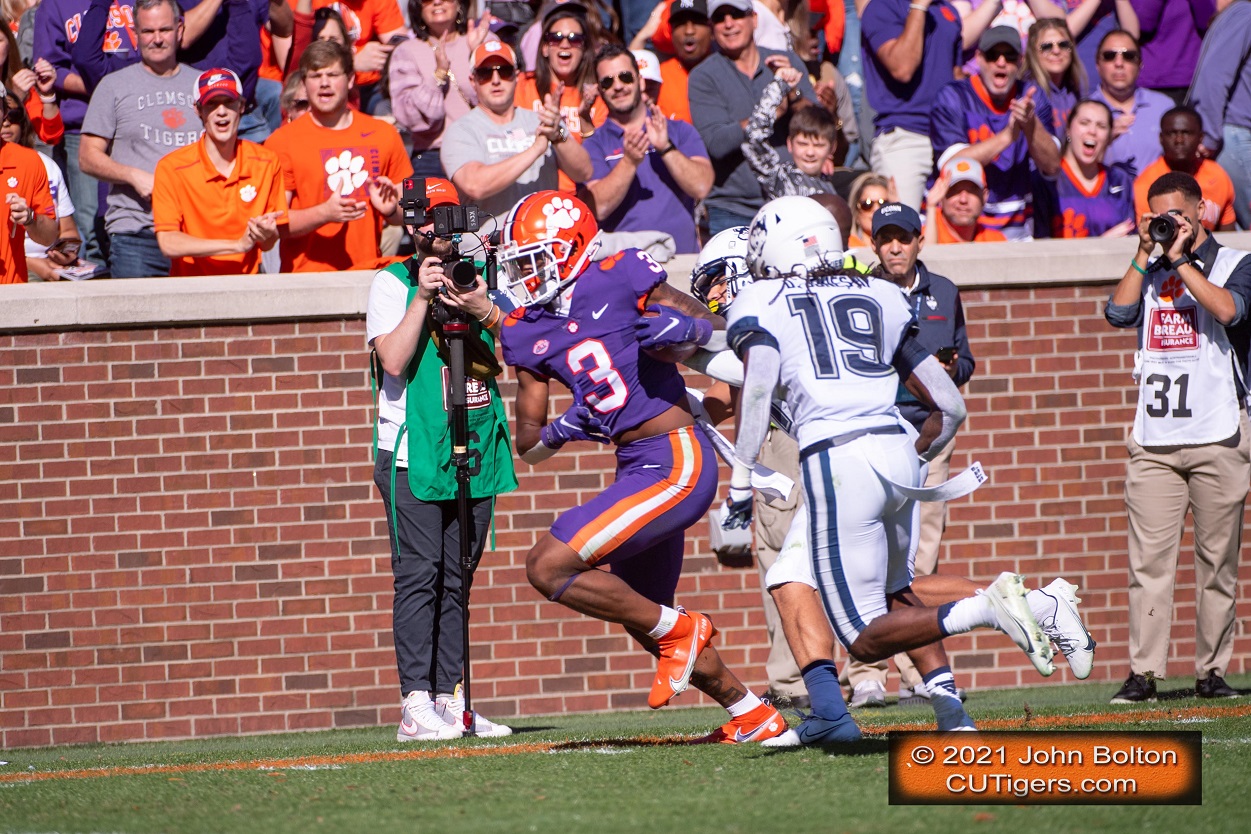 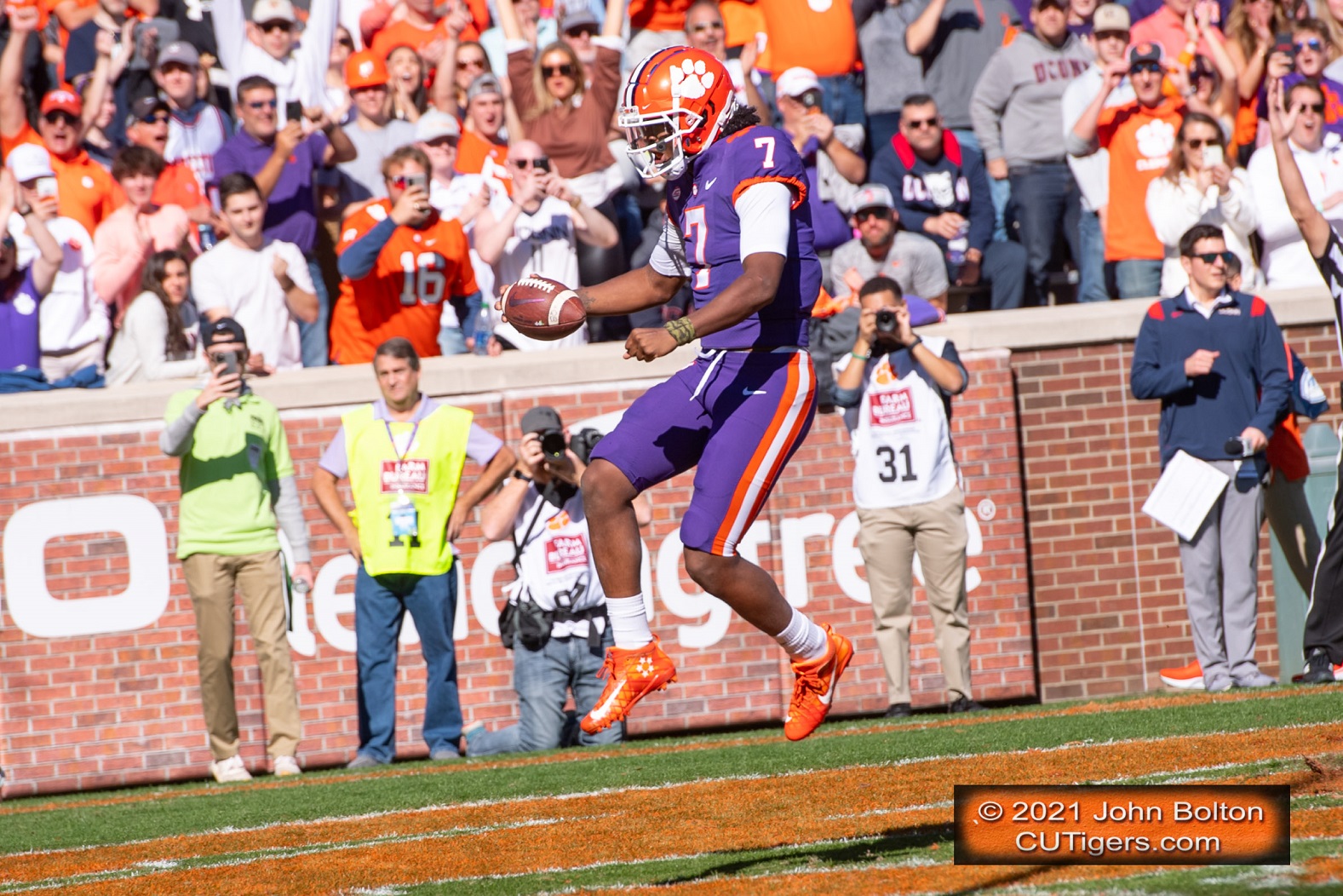 DJ had another inconsistent, frustrating game. He made some awful, wobbly, off-target throws but also made some brilliant throws, and that has basically been the story of his sophomore season. He finished the game 21-44 for 241 yards and a touchdown with one interception. He stared down the receiver on that one, but it was also the fault of EJ Williams because he can't let the defender catch the ball. It's his responsibility to knock it out by any means possible, even if it's a penalty. DJ made one of the best throws you'll ever see on a 32-yard touchdown to his former high school teammate Beaux Collins. You literally couldn't have dropped it over his shoulder any better if you handed it to him. That's what's so frustrating about DJ is that you see him make a throw like that after badly missing so many easy ones. DJ was also the victim of a couple bad drops by receivers, something that has also been a chronic issue all season with this team. It seemed like DJ wasn't moving very well on his sprained knee. Dabo told me Wednesday night that he was running fine in practice and reiterated that after the game, but they sure didn't call any quarterback runs for him in the game. 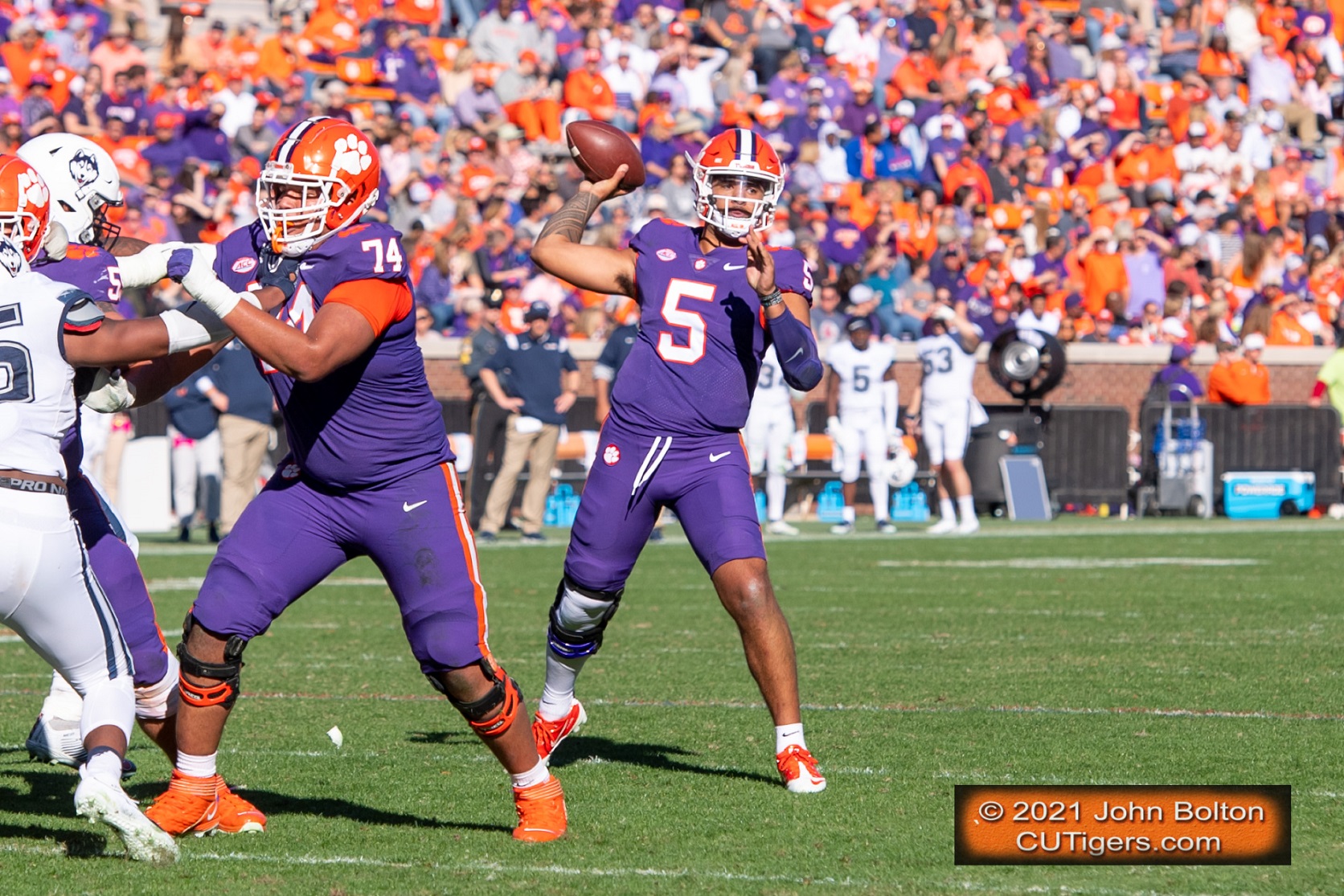 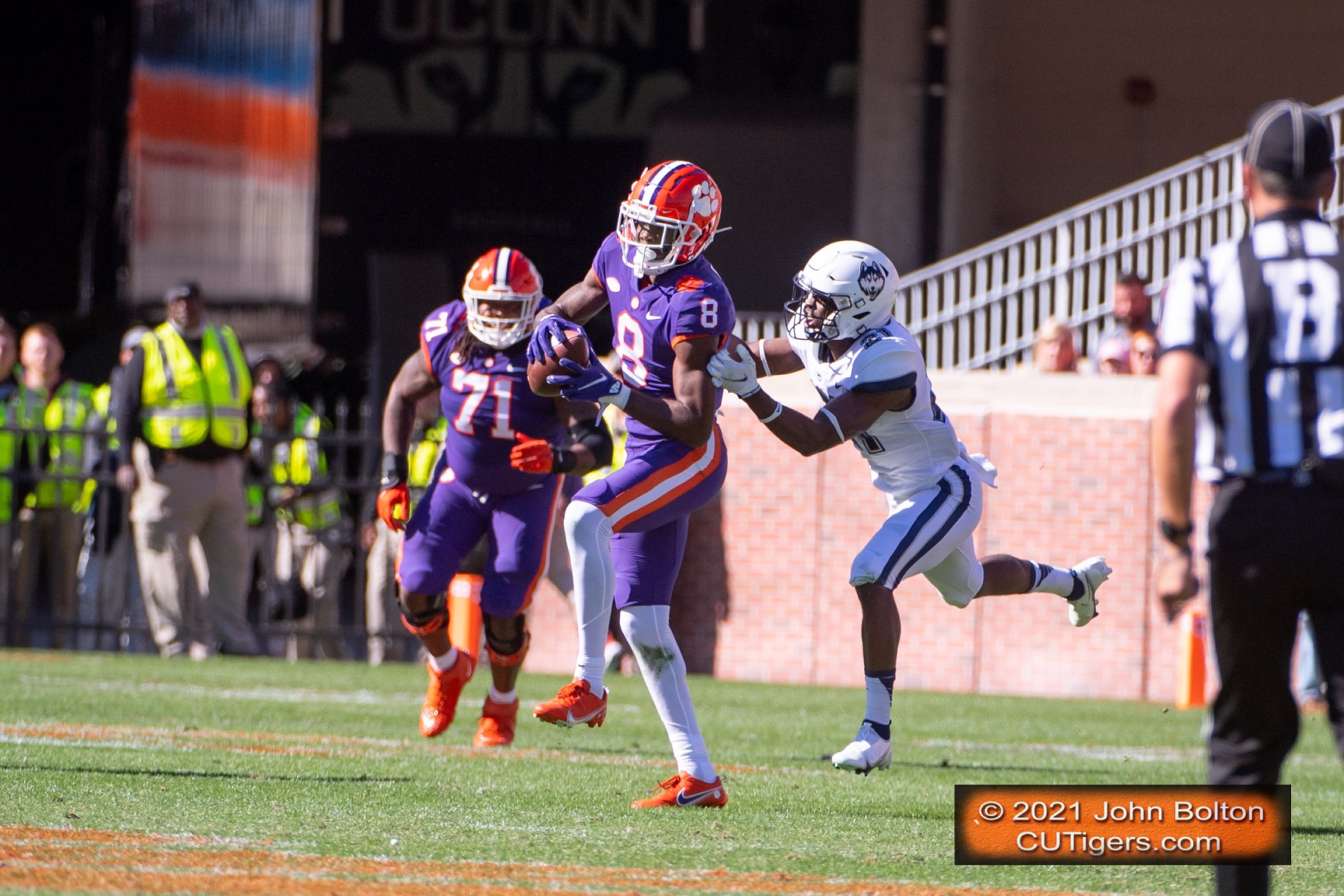 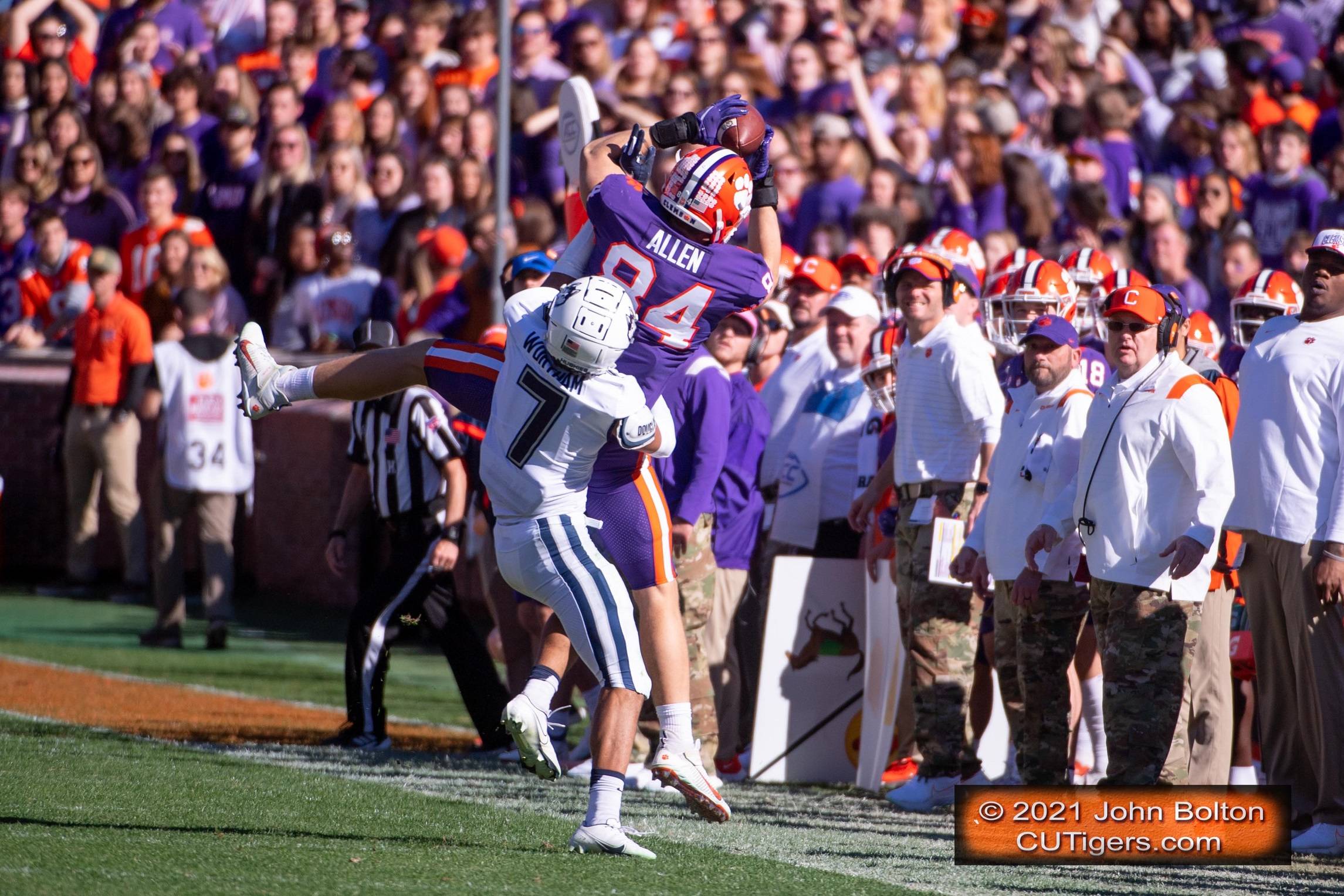 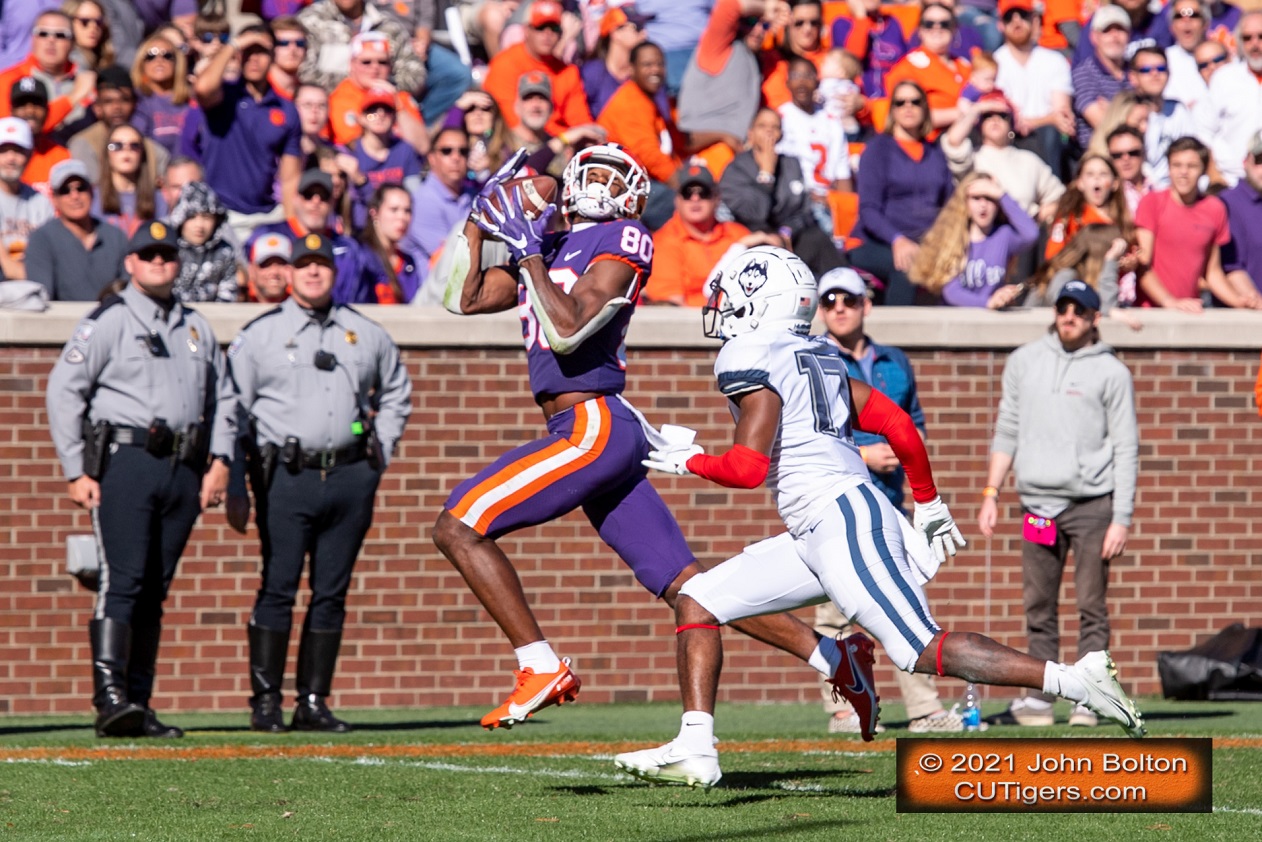 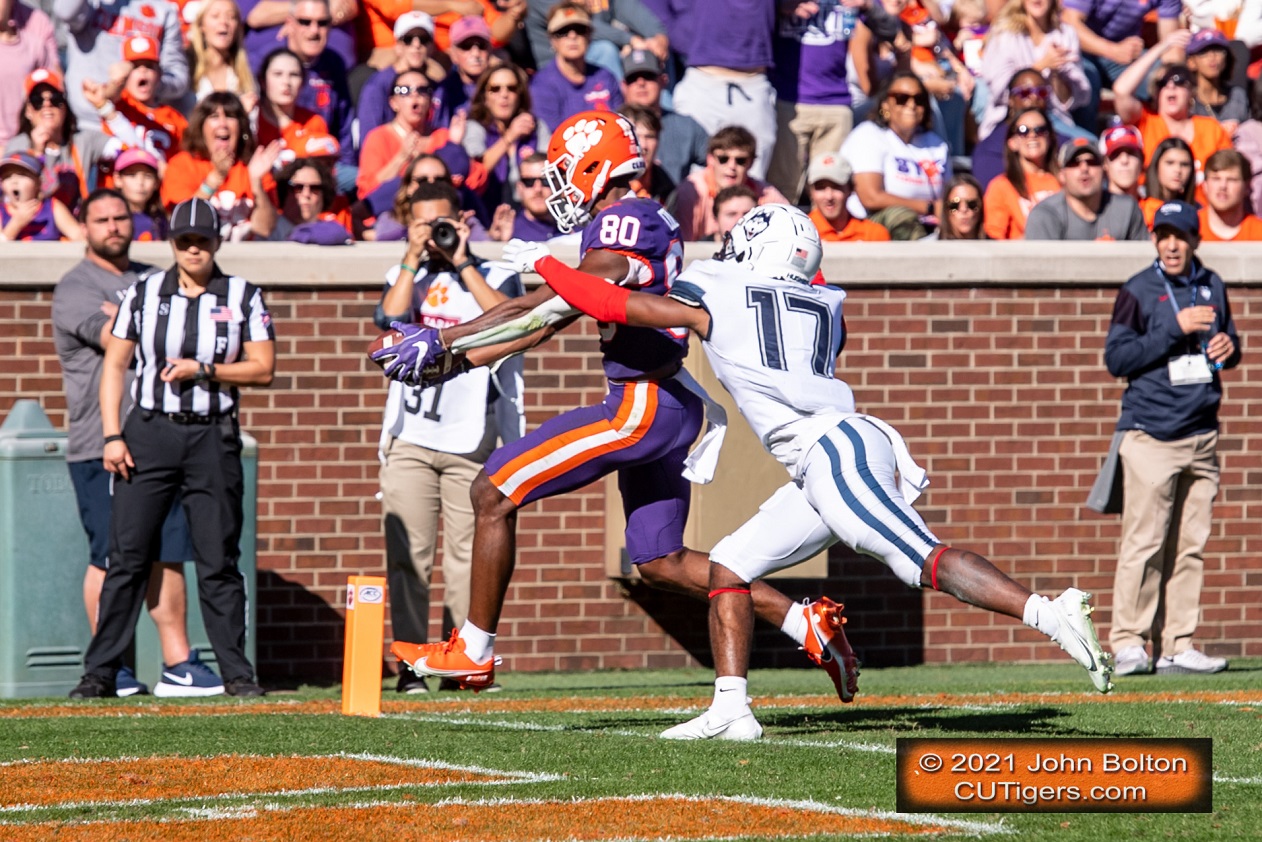 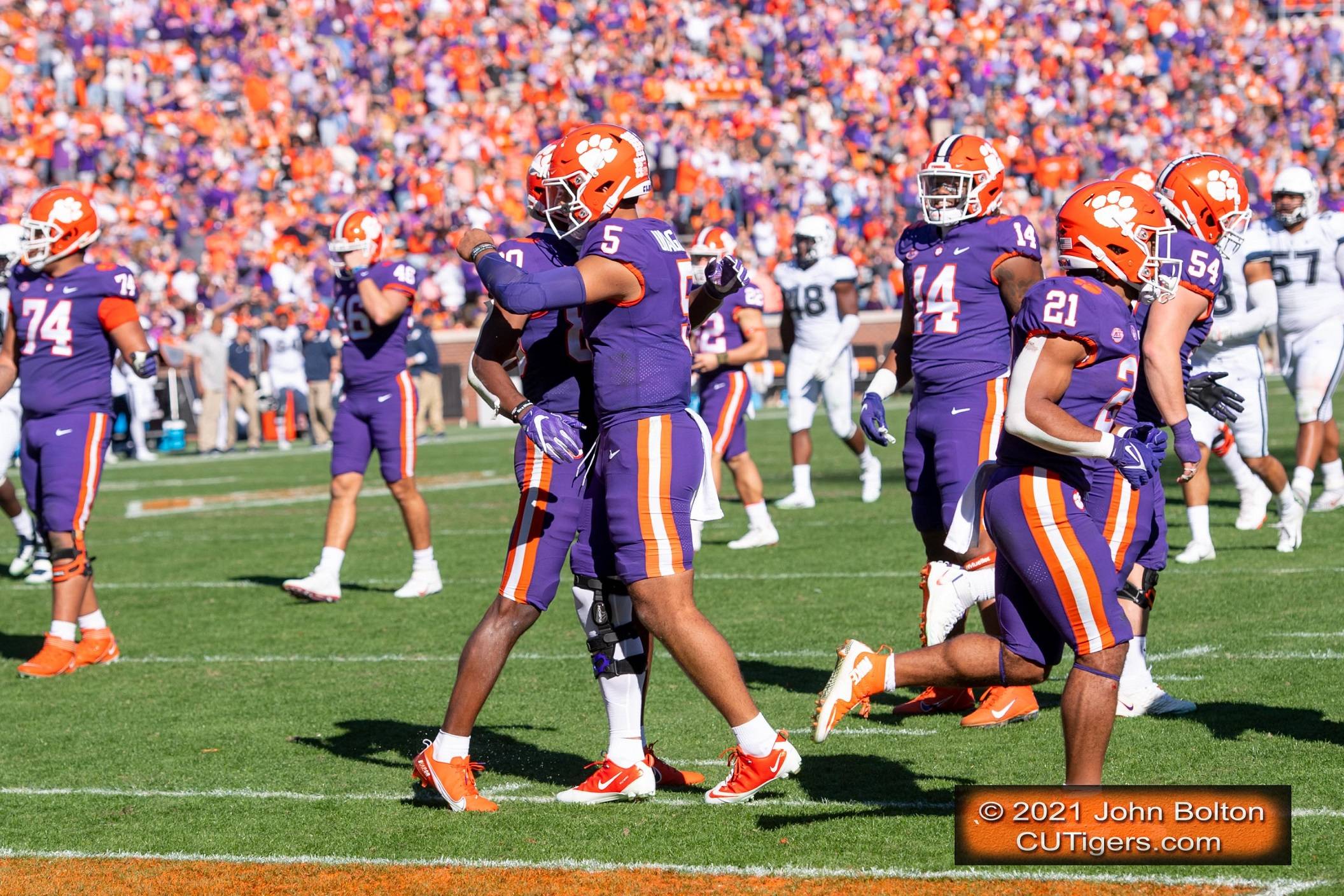 The freshman "Collins twins" are really starting to emerge with all the injuries to Ngata, Ladson, Williams and now Ross. Beaux went over 100 yards for the first time in his career last week with a touchdown at Louisville and had another long TD against UConn. Dacari had by far his biggest game against UConn with 6 catches for 97 yards. Ajou has frankly been a disappointment this season because I thought he'd have a breakout year based on everything Dabo was telling us in August and what I saw with my own eyes at practice. He's had a couple opportunities, but Dabo said the freshmen have just passed him by. Freshman TE Jake Briningstool made a nice catch on a jump ball for his first career touchdown. He's seen a lot more playing time in the past few games with Galloway out for the season. TE Sage Ennis was also injured against UConn, so Luke Price got into the game and made a big catch to convert a fourth down. 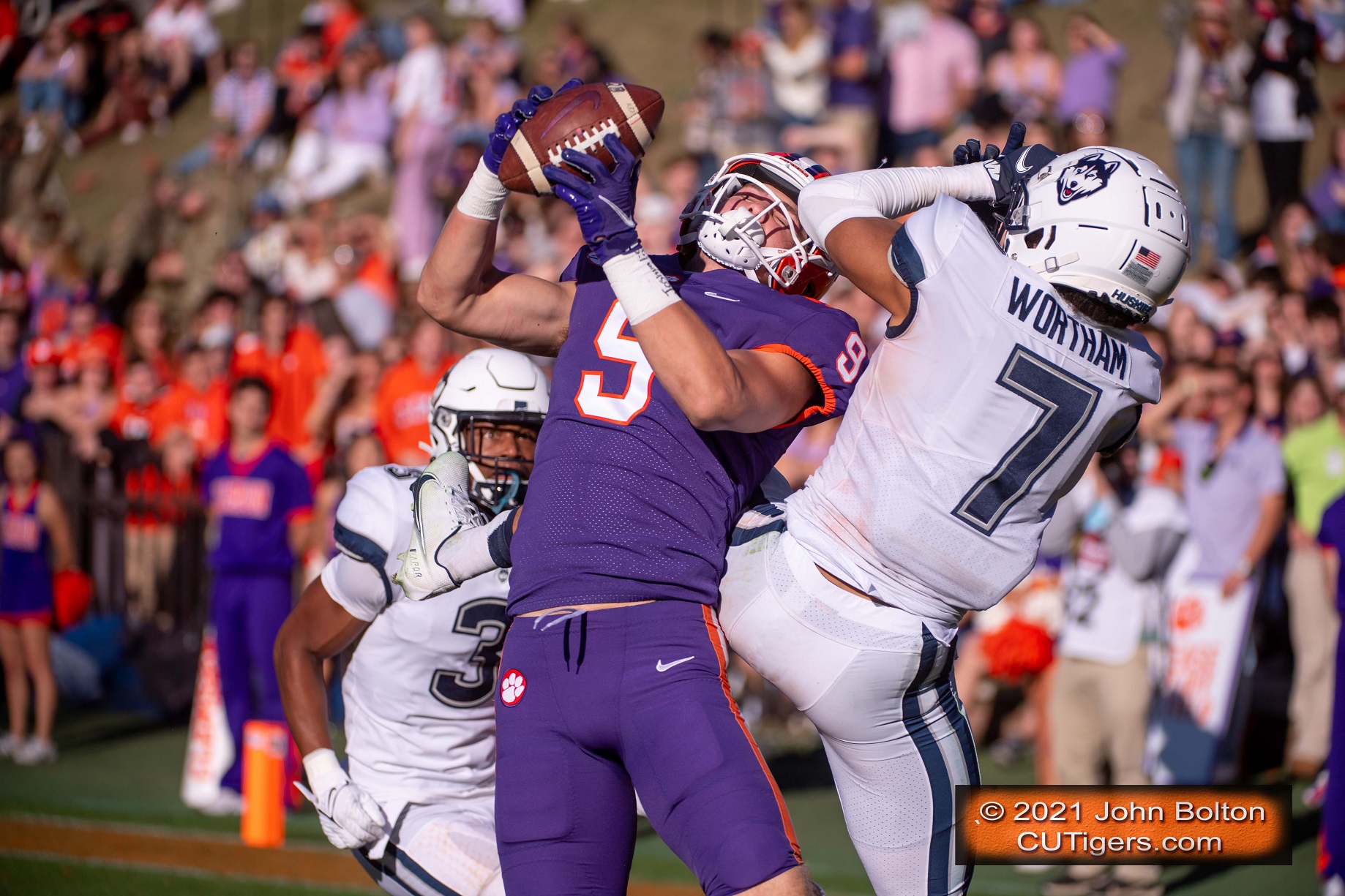 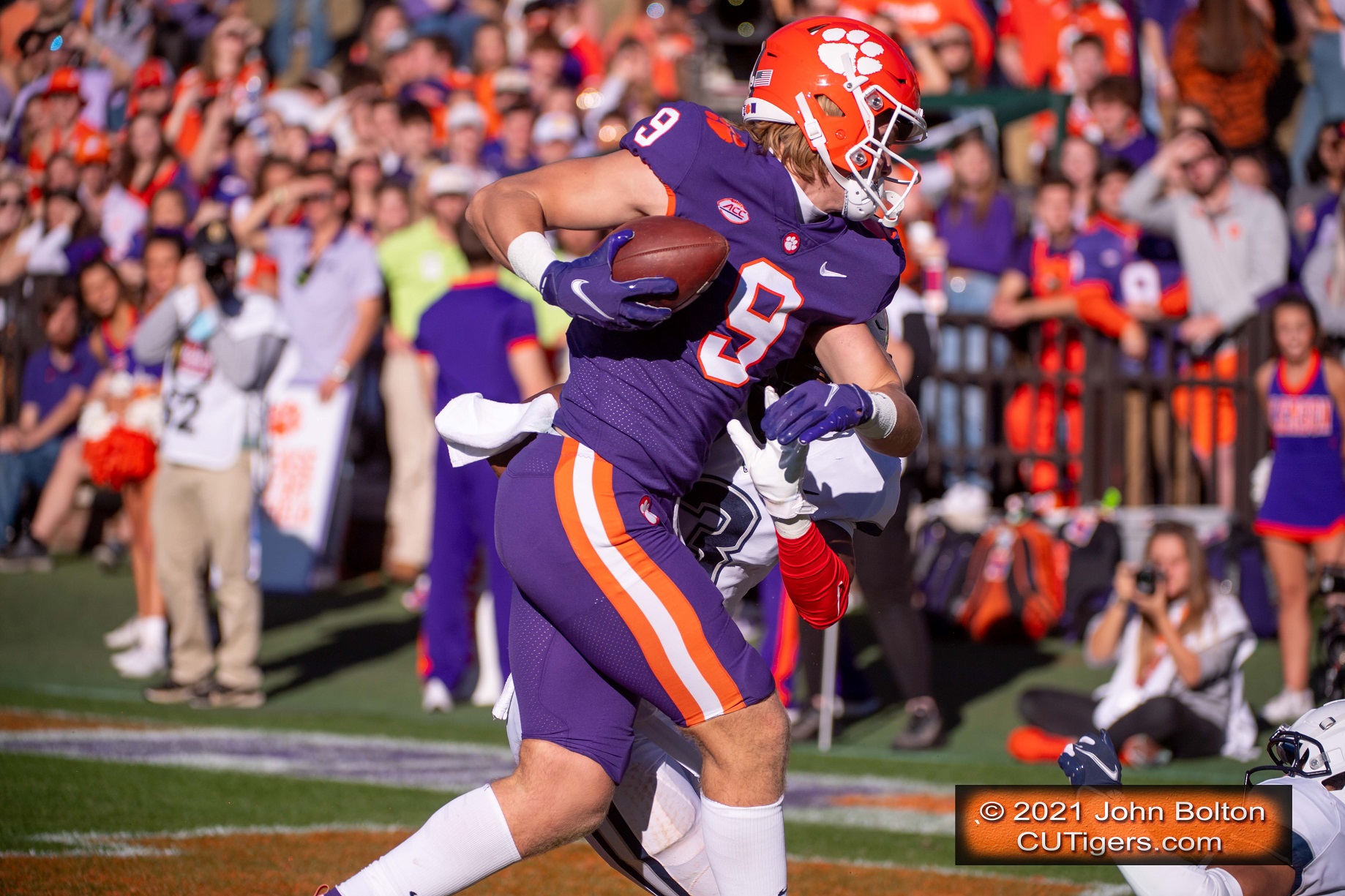 Sophomore QB Hunter Helms entered in the third quarter and went 3-8 passing. He had a nice 32-yard completion to Max May, who would have scored if the turf monster hadn't tripped him up. Helms drove the offense to the UConn 3-yard line, but Rencher fumbled just short of the goal line on 3rd and goal. Freshman Billy Wiles came in for the last couple possessions and had the TD pass to Briningstool. 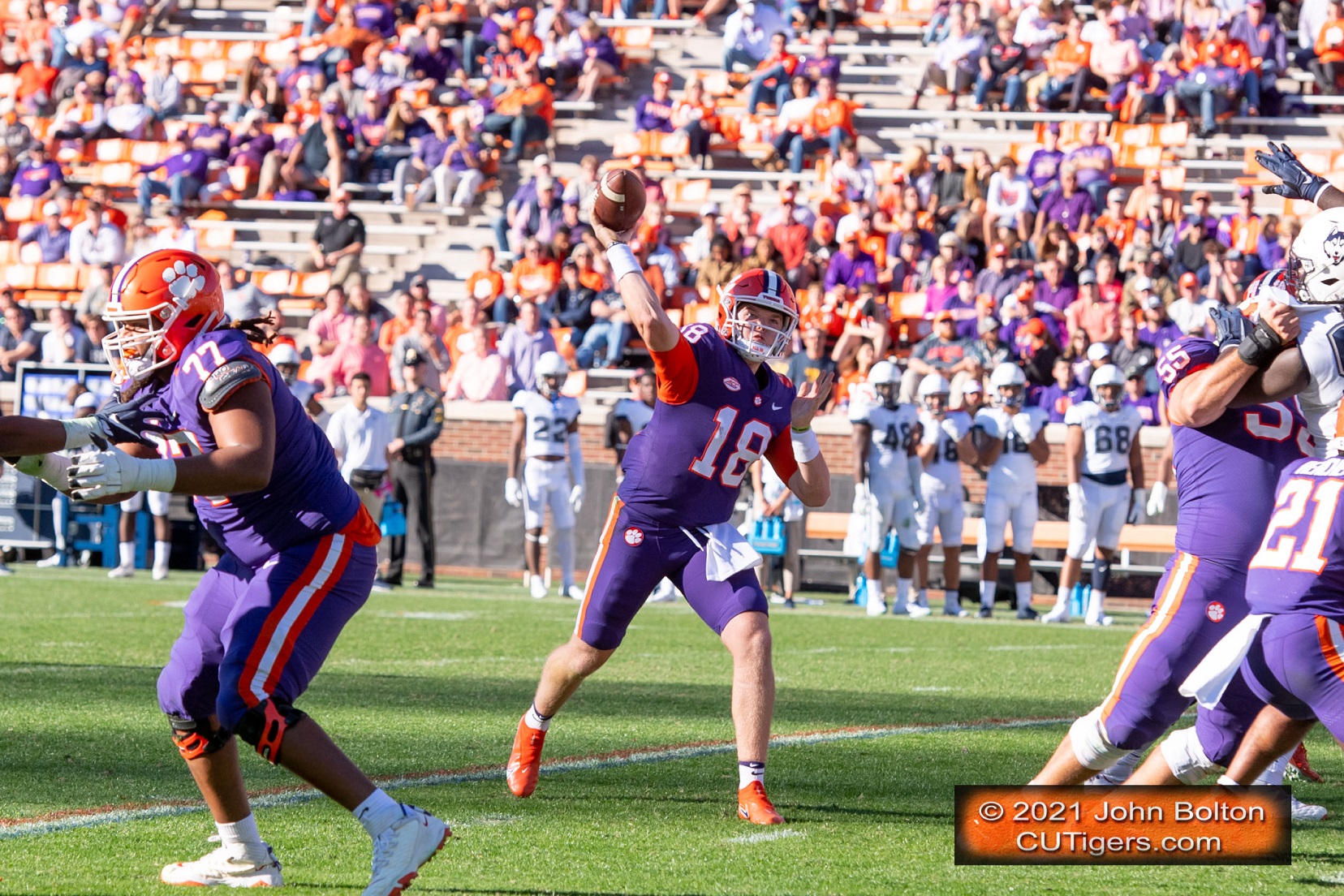 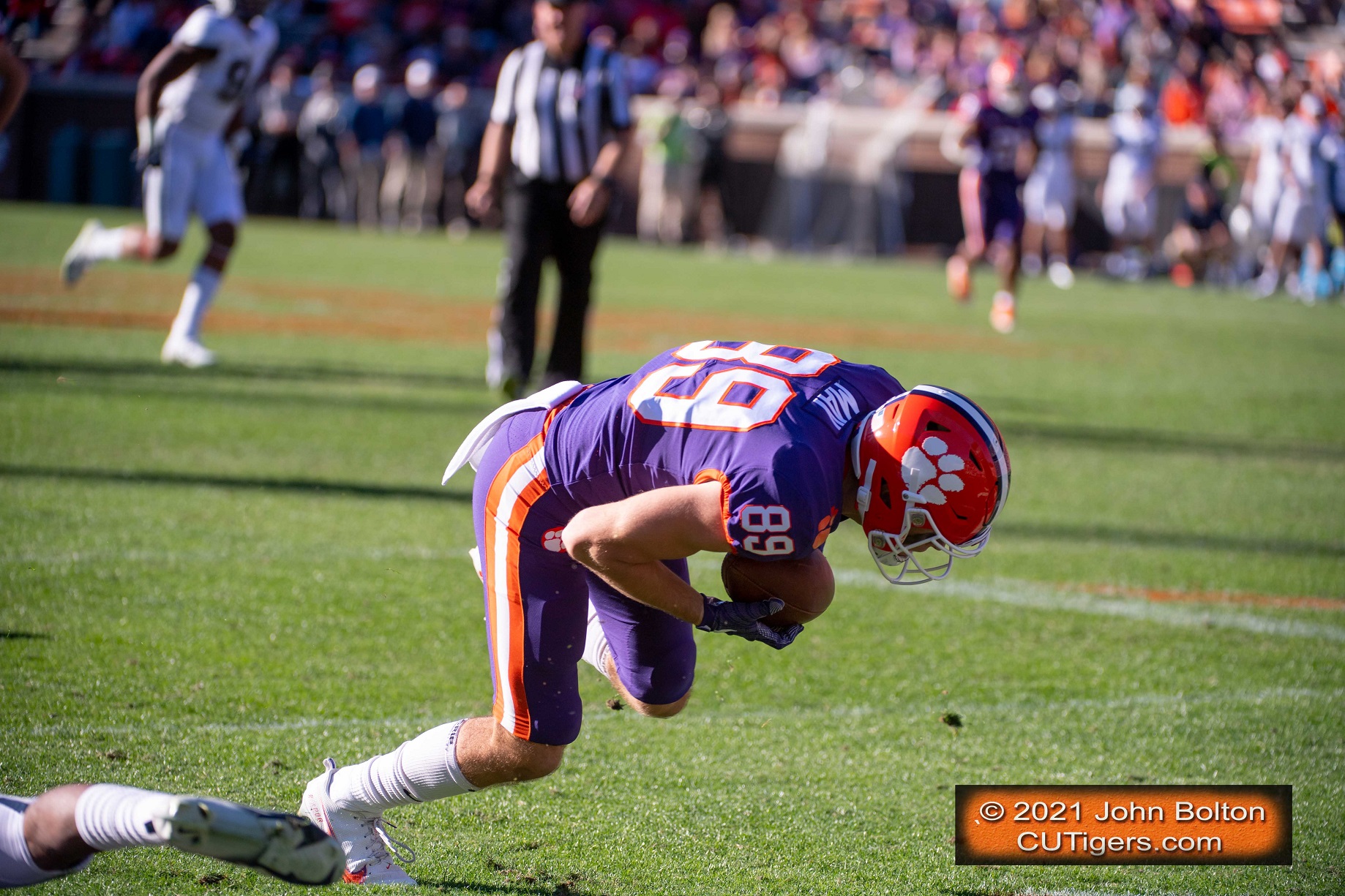 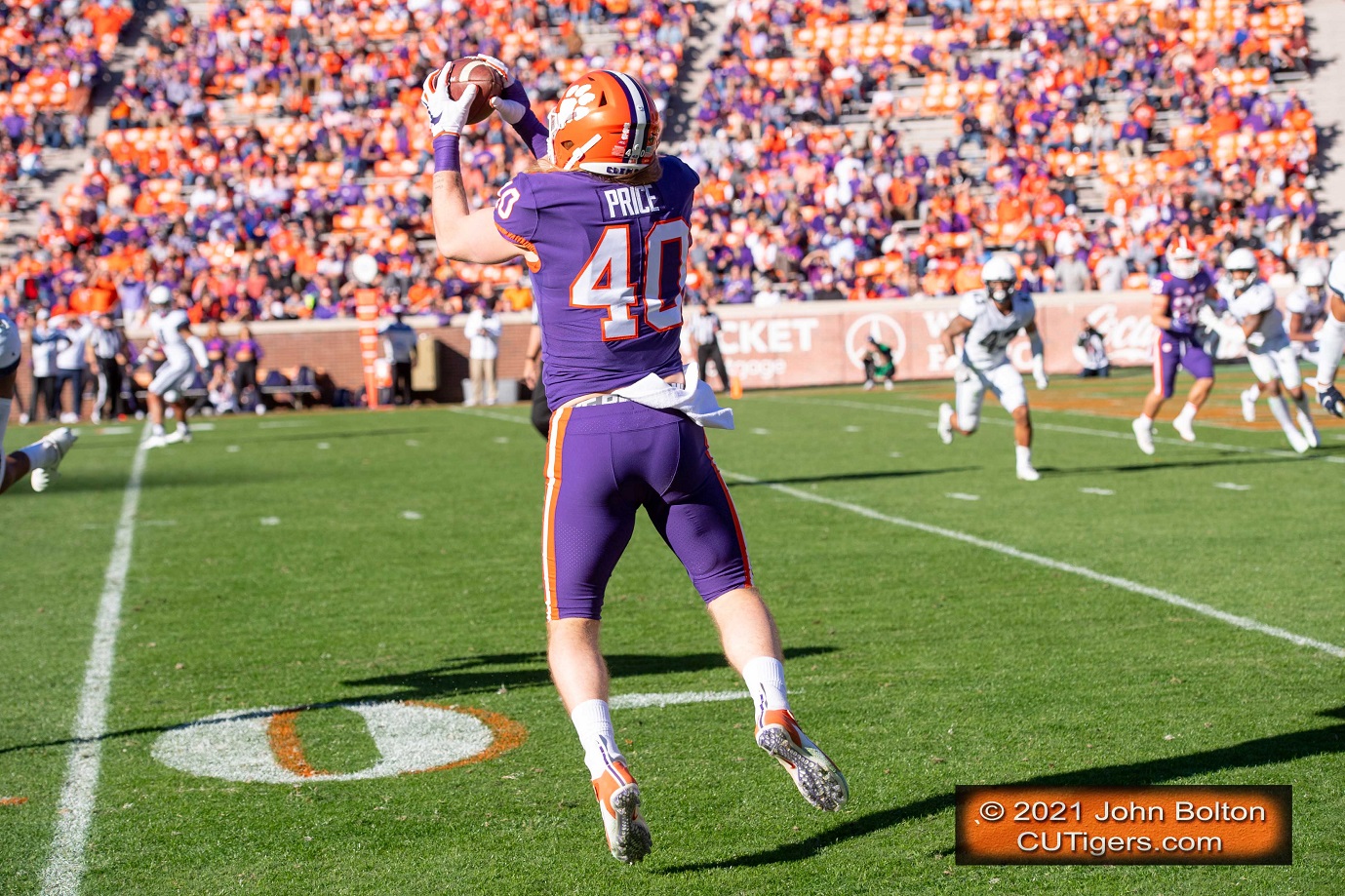 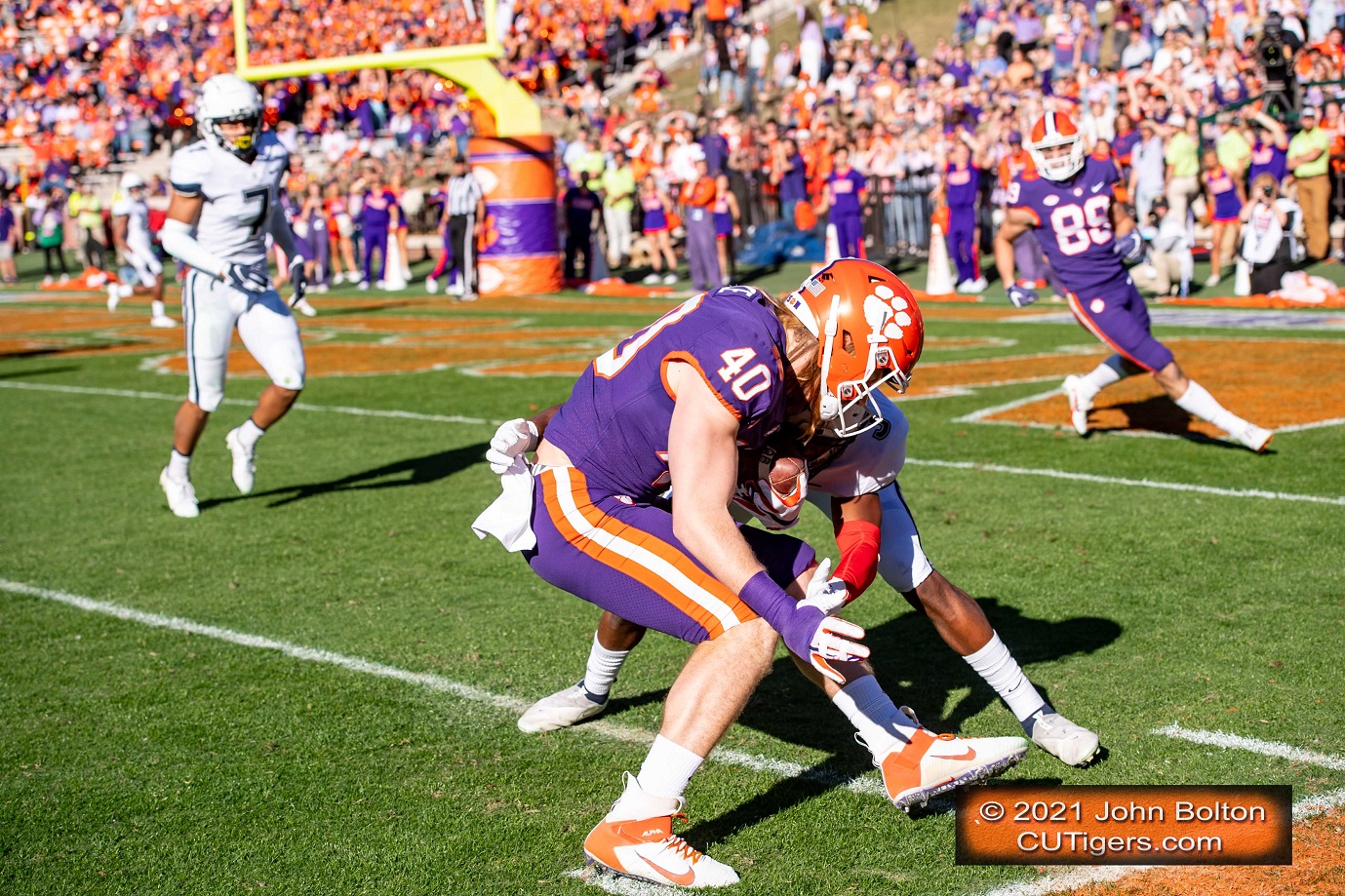 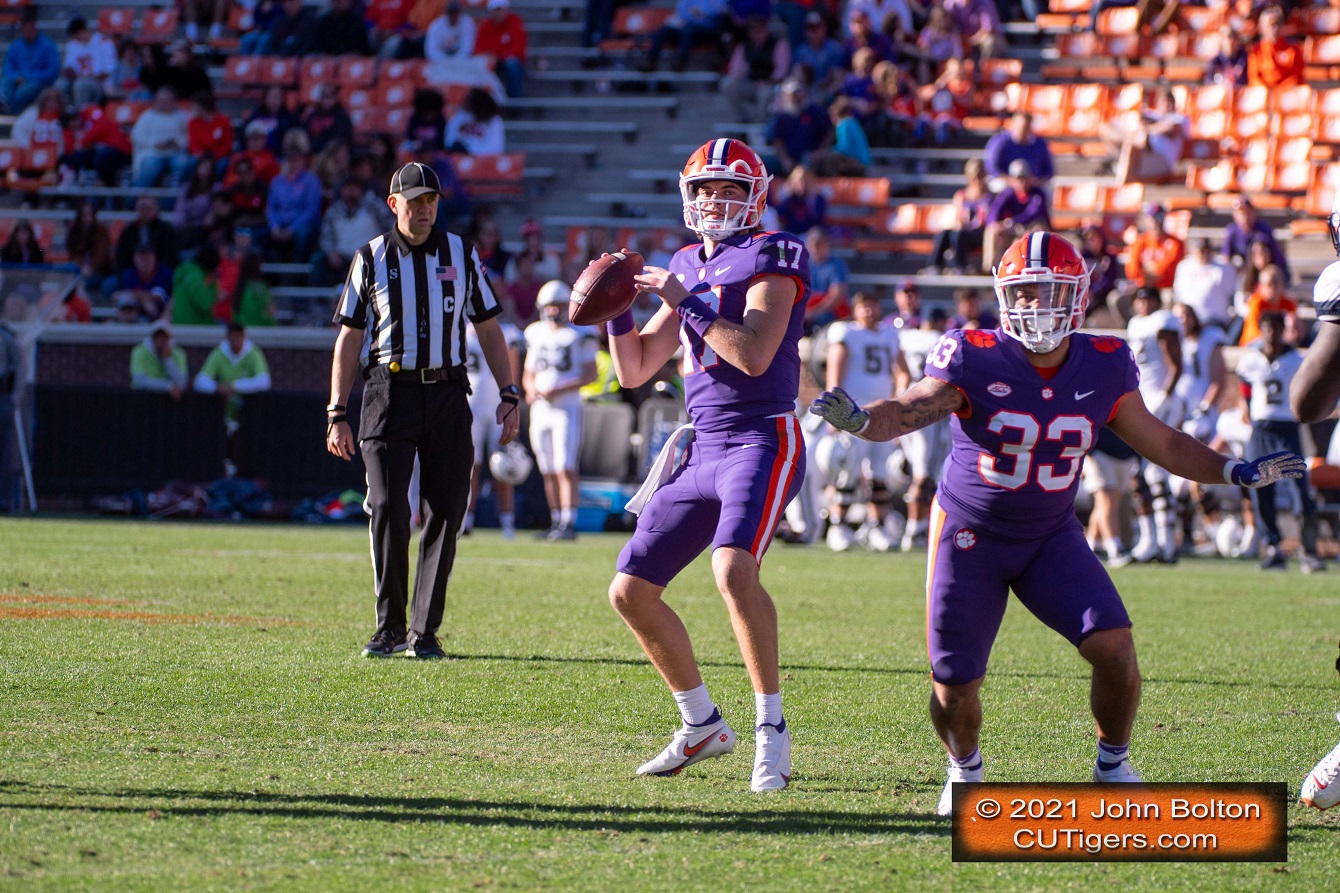 Other than the coverage unit, special teams were a bright spot for the Tigers. Potter was 3-3 on field goals, including a pair from 49 yards, and holder Will Swinney ran 6 yards for a fake field goal touchdown. Dabo said that he saw an opportunity for the fake in film study, and everything lined up perfectly for it. The Tigers executed it perfectly, and it gave them their first lead of the game. Spiers also had a couple nice punts. 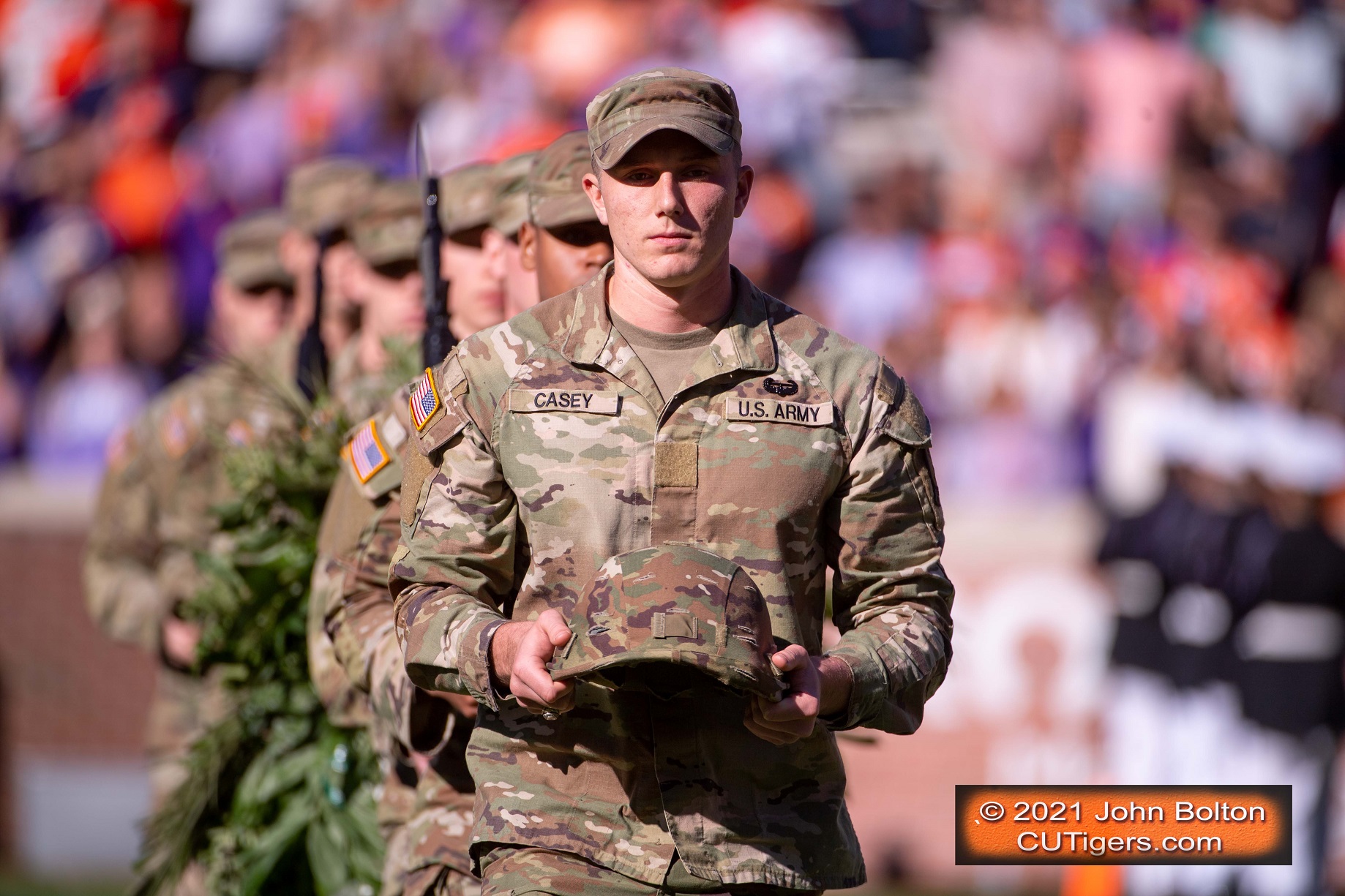 It was gorgeous weather for Military Appreciation Day, and nobody honors the military better than Clemson does! Trenton Simpson had the honor of running the flag down The Hill, and he had a nice moment on the field during a timeout with his father, who is in the military. For those who weren't there, the video below is from the halftime tribute in Death Valley.
Be sure to click HERE to check back on Sunday evening for an update on Justyn Ross and Taisun Phommachanh. I'll have the entire audio from our Zoom call with Dabo posted there. In the meantime, post-game interviews, notes and highlights are below!