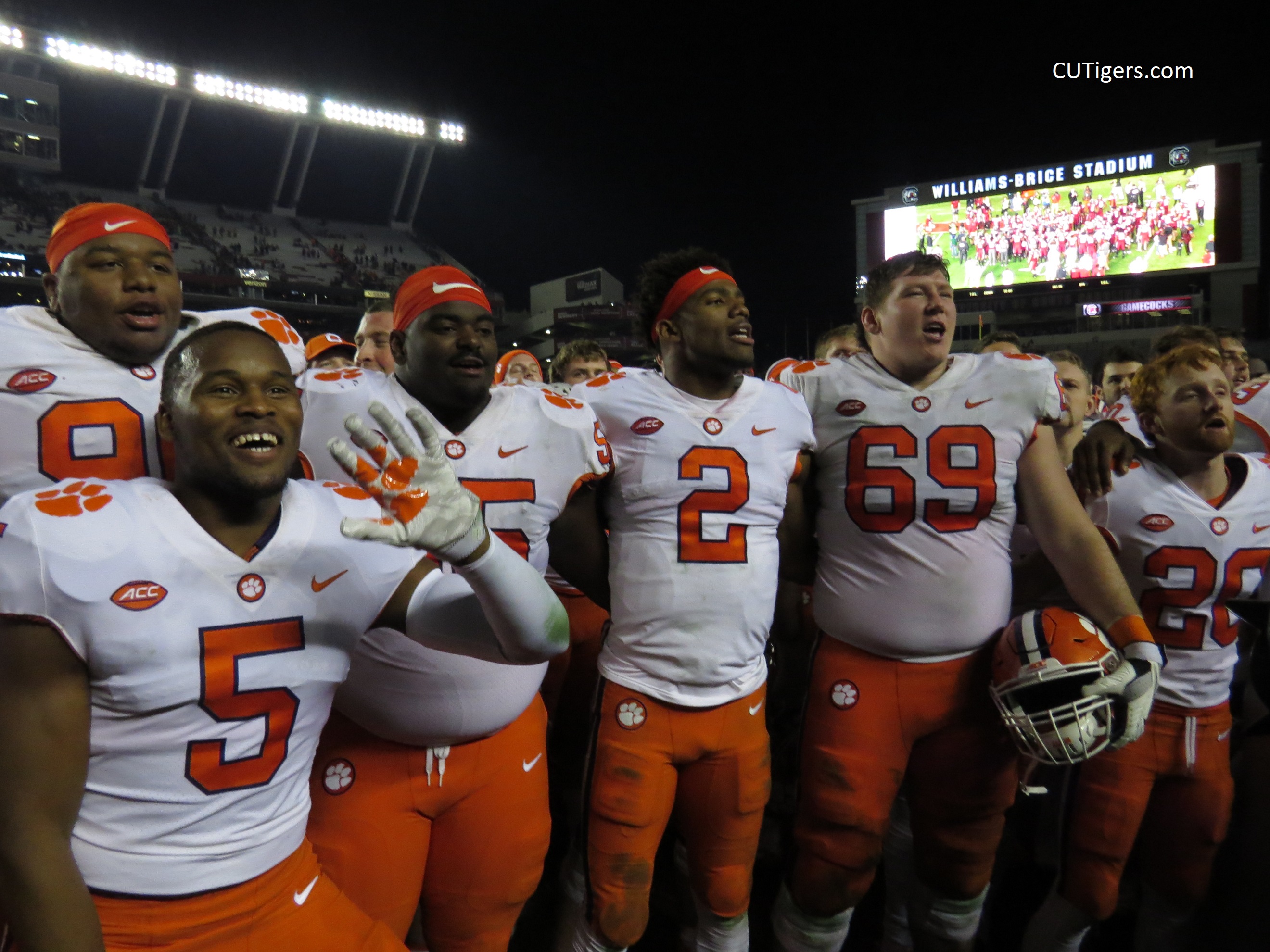 Photo by Trevor Groves CUTigers.com
MORE POST-GAME INTERVIEWS HERE
HIGHLIGHTS:
BOX SCORE
COLUMBIA, S.C. – The No. 3 Clemson football team earned the Palmetto Bowl trophy for the fourth consecutive year with a 34-10 defeat of the No. 24 South Carolina Gamecocks at Williams-Brice Stadium on Saturday. With the win, Clemson improved to 11-1 on the year, while South Carolina fell to 8-4. The victory was the 100th of head coach Dabo Swinney’s career.
Offensively, the Tigers were sparked by Hunter Renfrow, who totaled 75 yards and two touchdowns on four catches, one of which was a career-long 61-yard scoring reception. Including Renfrow, Kelly Bryant connected with 11 different receivers, amassing 272 yards and two touchdowns on 23 completions. The Clemson defense held the Gamecocks to just 3.2 yards per play and 99 total yards in the first half, and both Ryan Carter and Trayvon Mullen hauled in interceptions during the game.
After a 43-yard Will Spiers punt set up a South Carolina drive at its own one-yard line midway through the first quarter, Carter intercepted a Jake Bentley pass and ran it 12 yards for a touchdown that gave the Tigers a 7-0 lead. The Carter pick six proved to be the only scoring of the first quarter.
Clemson doubled its lead with just over eight minutes remaining in the first half on a one-yard touchdown run by Tavien Feaster, capping a drive that was highlighted by a 24-yard reception for Tee Higgins on a third down play. Higgins was also instrumental on third down a few Tiger drives later, hauling in a 40-yard pass from Bryant that brought the Tigers inside the 10-yard line and set up a four-yard touchdown reception by Renfrow. After the two scores, Clemson took a 20-0 advantage into the break.
Renfrow found the endzone for the second time on the first play of the second half, a 61-yard scoring pass from Bryant. A five-yard touchdown run by Travis Etienne with just under three minutes left in the third quarter put the Tigers up 34-0 heading into the final 15 minutes.
Parker White hit a 40-yard field goal to put the Gamecocks on the board early in the fourth quarter, and South Carolina increased their point total to 10 when Bentley connected with Bryan Edwards for a 38-yard scoring pass with just under three minutes remaining in the game.
Clemson will face Coastal Division winner Miami in the ACC Championship game in Charlotte, N.C. next Saturday. Kickoff is slated for 8 p.m. at Bank of America Stadium.