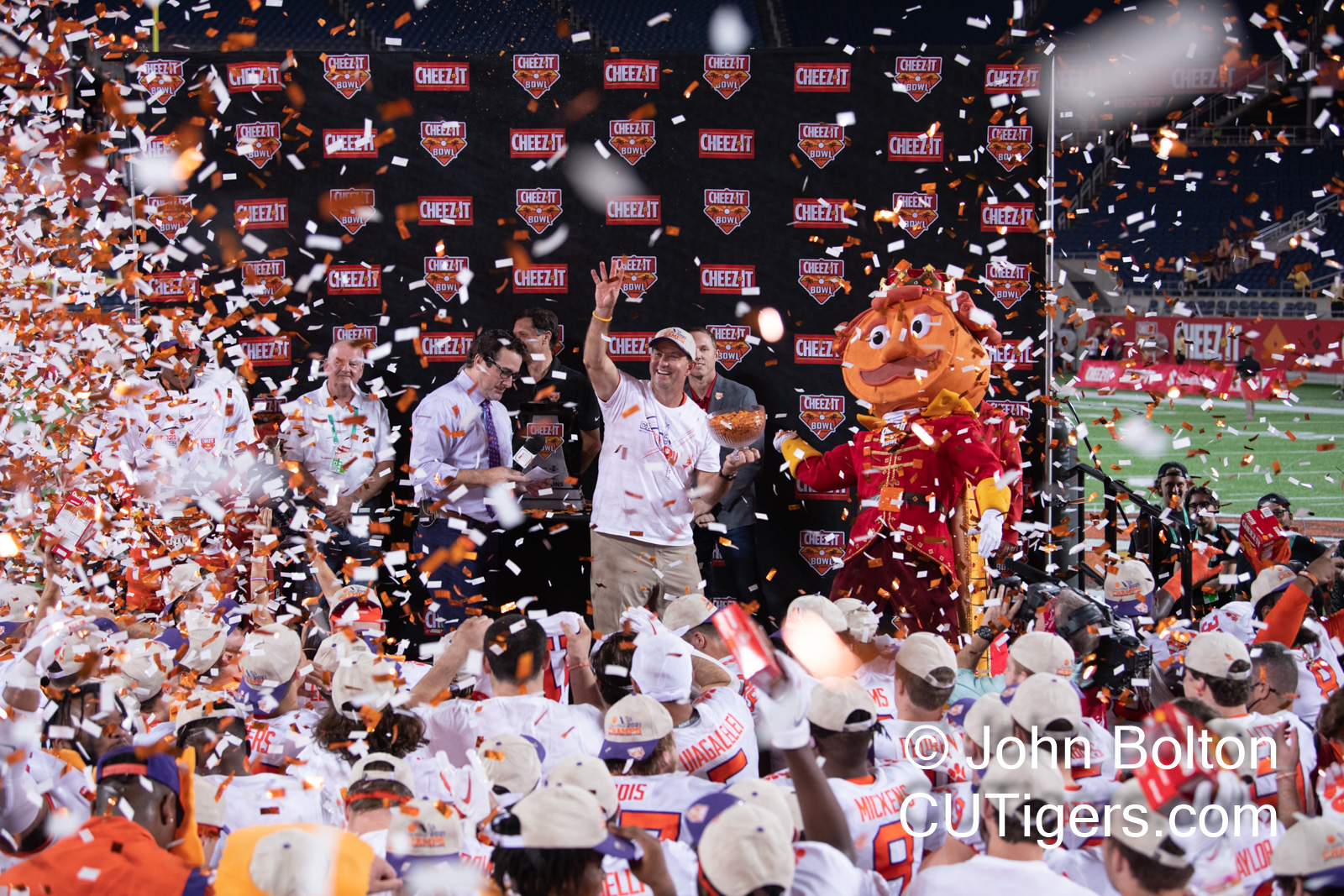 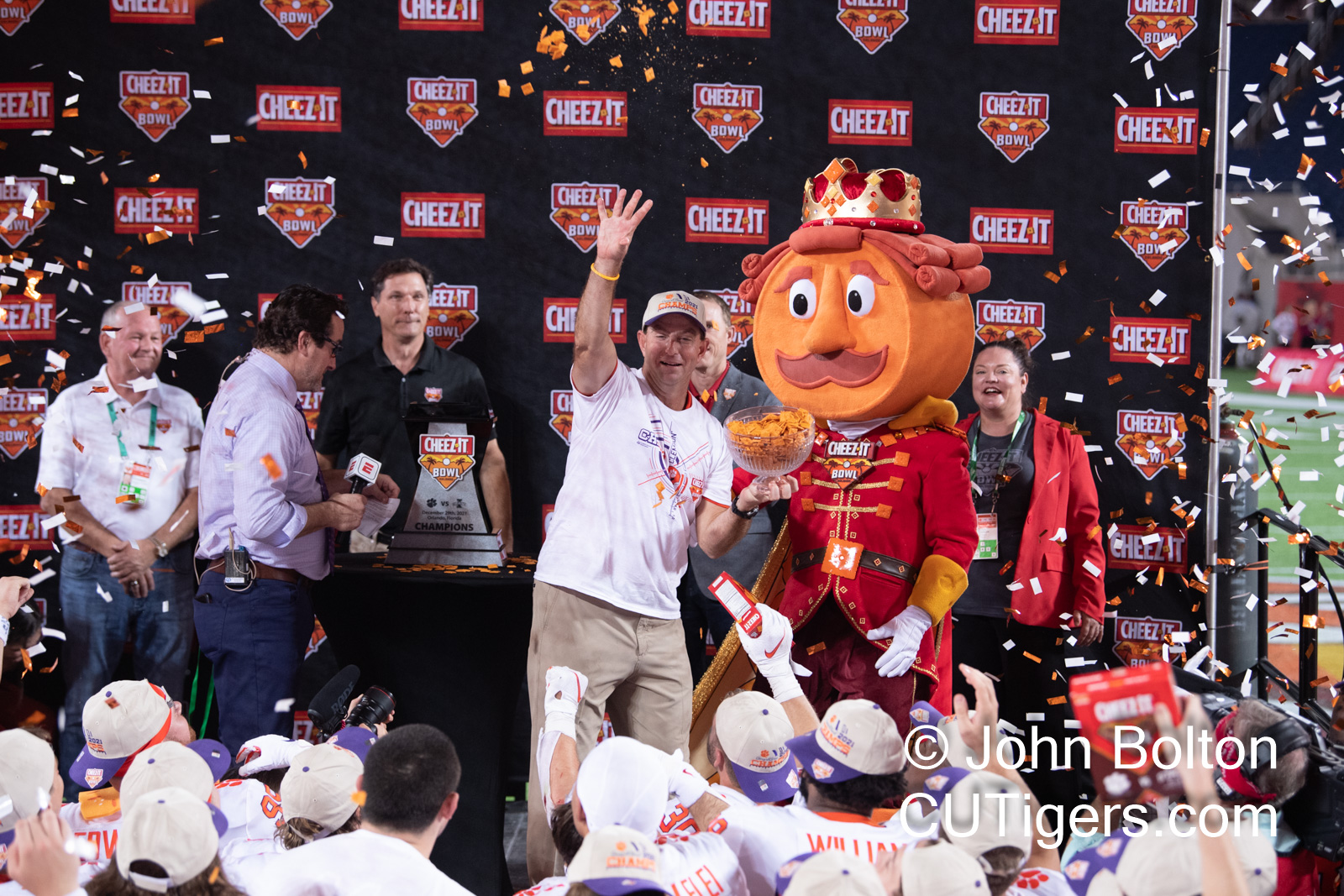 ORLANDO, FL - It was a frustrating season for Clemson fans with an unprecedented number of injuries, and the Tigers were literally 3 or 4 plays from being undefeated and making their 7th straight playoff, but you couldn't tell by the joy on the coaches' and players' faces tonight after beating Iowa State to finish 10-3. To win 10 games for 11 straight years is truly remarkable in and of itself. It has only been accomplished two other times in the history of college football--once by Bobby Bowden and FSU and once by Nick Saban and Alabama. But the fact that the Tigers have done so in spite of Covid last year and having 30 scholarship players missing games with injury this year makes it all the more remarkable. On top of perhaps the most injuries to starters in the history of college football, the Tigers had to play four top-20 teams, 3 of them away from home, including the team that was No.1 for most of the season. Just about any other team would have gone 2-10 with that schedule and those injuries, but the Tigers finished 10-3! All you need to know about the culture of this program is the fact that they had zero opt outs for the Cheez-It Bowl in an age when other teams are having their stars opt out of New Year's Six bowls like the Rose and Orange! Kenny Pickett opted out when he had a chance to give Pitt a New Year's Six bowl win for the first time in 45 years! UNC had its two star running backs and star linebacker opt out of the Orange Bowl last year--the first New Year's Six bowl for the Heels in 60 years! Ohio State had its top 2 receivers opt out of the Rose Bowl last week. On and on and on. And this is the Cheez-It Bowl we're talking about! After playing for a national title every other year in their career, each and every one of these Clemson players decided to suit up and go to battle one more time to keep the 10-win season streak going.
It was a bitter-sweet ending to the long, accomplished careers of James Skalski, Nolan Turner and Baylon Spector. Turner and Spector both missed the start of the game with injuries, and Skalski was knocked out of the game in the second quarter with a foot or ankle injury. It's amazing that the defense was able to hold Brock Purdy and the Iowa State offense to just 6 points for most of the game without 5 starters from the start of the season, including Skalski. We have seen how much the Tigers miss Skalski when he's been out in the past. He was ejected from the last two Tigers' CFP losses. He was knocked out of the NC State game, and they lost in overtime. He missed the Notre Dame game in South Bend last year, and they lost in overtime. However, the defense was phenomenal against the Cyclones in spite of his absence. True freshman Barrett Carter was fooled by senior All-American tight end Charlie Kolar for the Cyclones' only touchdown in the 4th quarter, but Keith Maguire did an excellent job filling in at linebacker. Four-year starting QB Brock Purdy was 4th in the nation, completing 73.1% of his passes this season but only completed 59% for 204 yards against the Tigers. 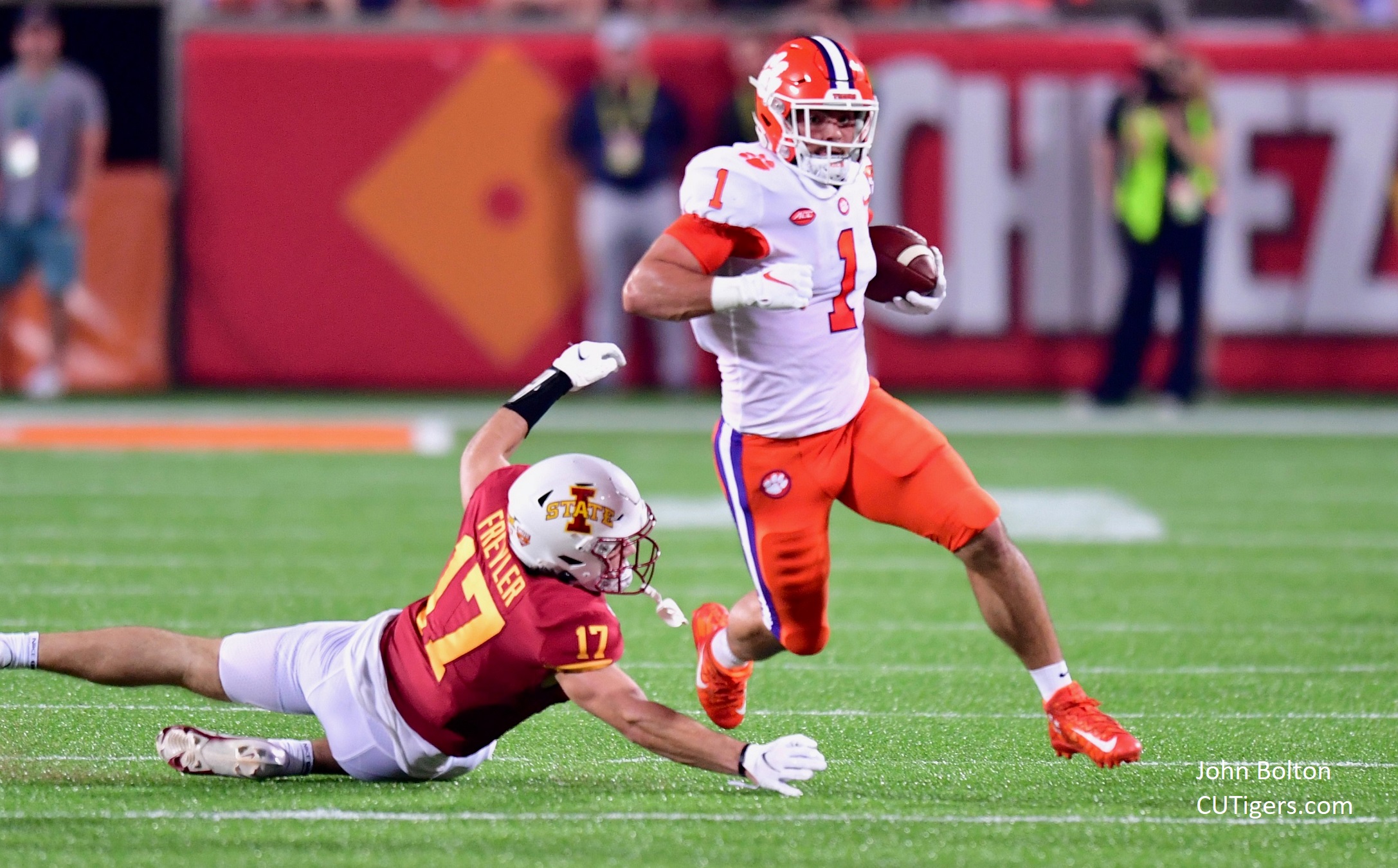 The Tigers' offense got off to a great start, driving all the way down to the 4-yard line but settled for a field goal on 4th and goal. The opening drive was kept alive thanks to a third-down catch by Will Swinney, playing in his final game. He started at receiver for the third straight game because of all the Tigers' injuries at receiver. Ross and EJ Williams were out with injury, Ladson and Ajou transferred, and Ngata was coming off an injury that sidelined him for the previous few games. DJ played pretty well for the most part, protecting the football and avoiding sacks. He did have one interception, but it was on a deflected pass. He also made a couple great passes that were dropped, which has been the case in just about every game this season. He made a tremendous improvisational pitch to Shipley that should have converted a 3rd down, but Shipley dropped it, much like the one he dropped on the opening drive at NC State. A little later, freshman Beaux Collins dropped a third-down pass that hit him right in the hands. However, each player would redeem himself later. Shipley scored the Tigers' only offensive touchdown in the 3rd quarter and also made an incredible diving catch in coverage. Collins made a circus catch to convert a 3rd down that led to Shipley's touchdown. 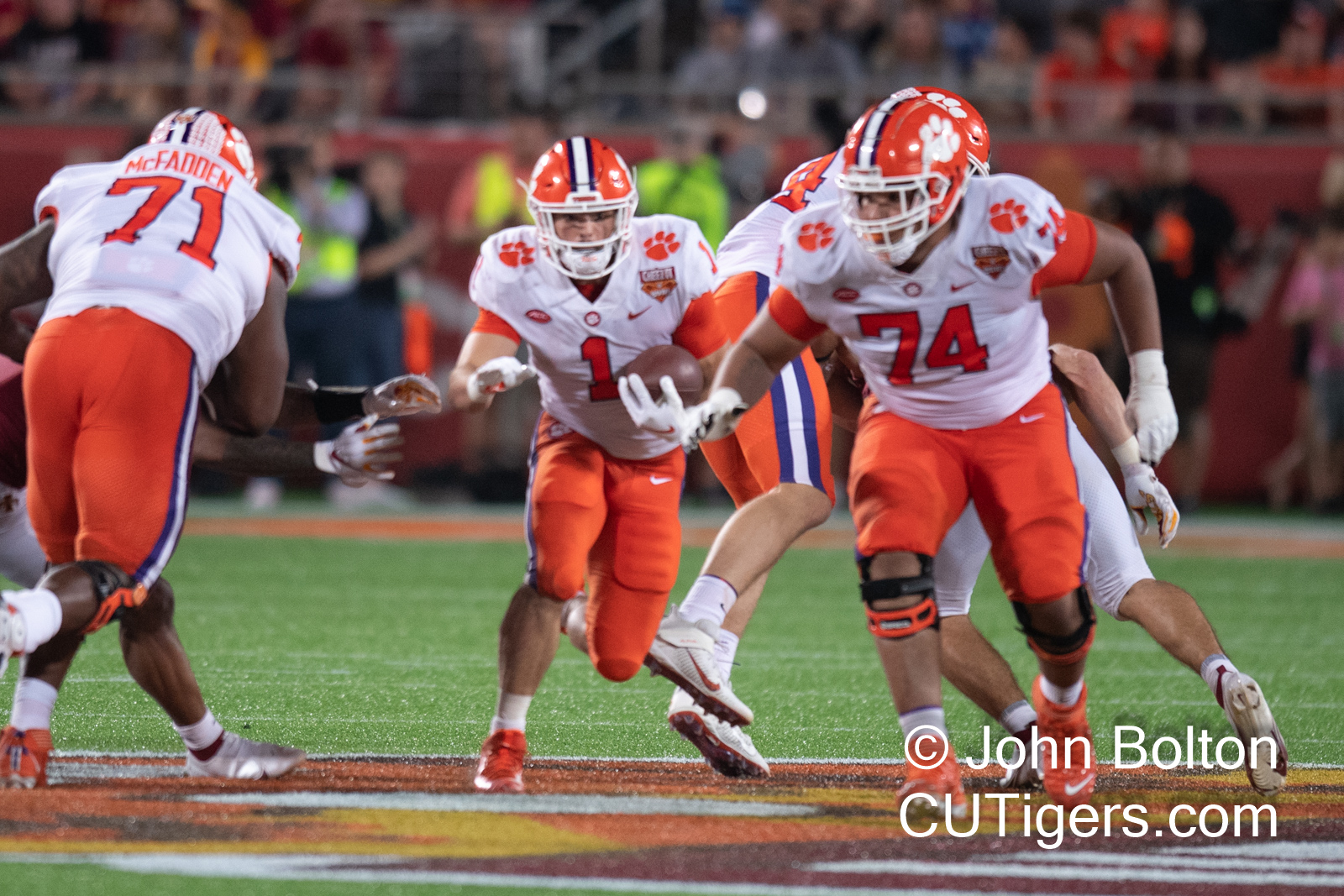 It was musical chairs once again for the Tigers' offensive line. Trotter was expected to start at center but could not play, so Rayburn moved to center, and true freshman Marcus Tate started at guard. What a job Robbie Caldwell did with the offensive line this season! Dabo announced after the game that this season was indeed his last, and it was probably his most challenging because of the injuries and inexperience he had to deal with. The Tigers had a different starting lineup on the line in almost every game this season. Caldwell came to Clemson in 2011, and the Tigers have won at least 10 games every season since! He was the recipient of a Gatorade bath after the game. Dabo announced after the game that former Clemson OL Thomas Austin will replace Caldwell as Offensive Line Coach. Dabo gave his rookie coordinators an A plus after the game. I'm not sure I would give the offense an A plus for scoring just 13 points, although they did start two freshmen and a former walk-on at receiver. I'll have to watch the game again to analyze the offense and the play calling in more detail. BT Potter uncharacteristically missed a 36-yard field goal, but he was 2-3 including a 51-yarder, tying his season long. 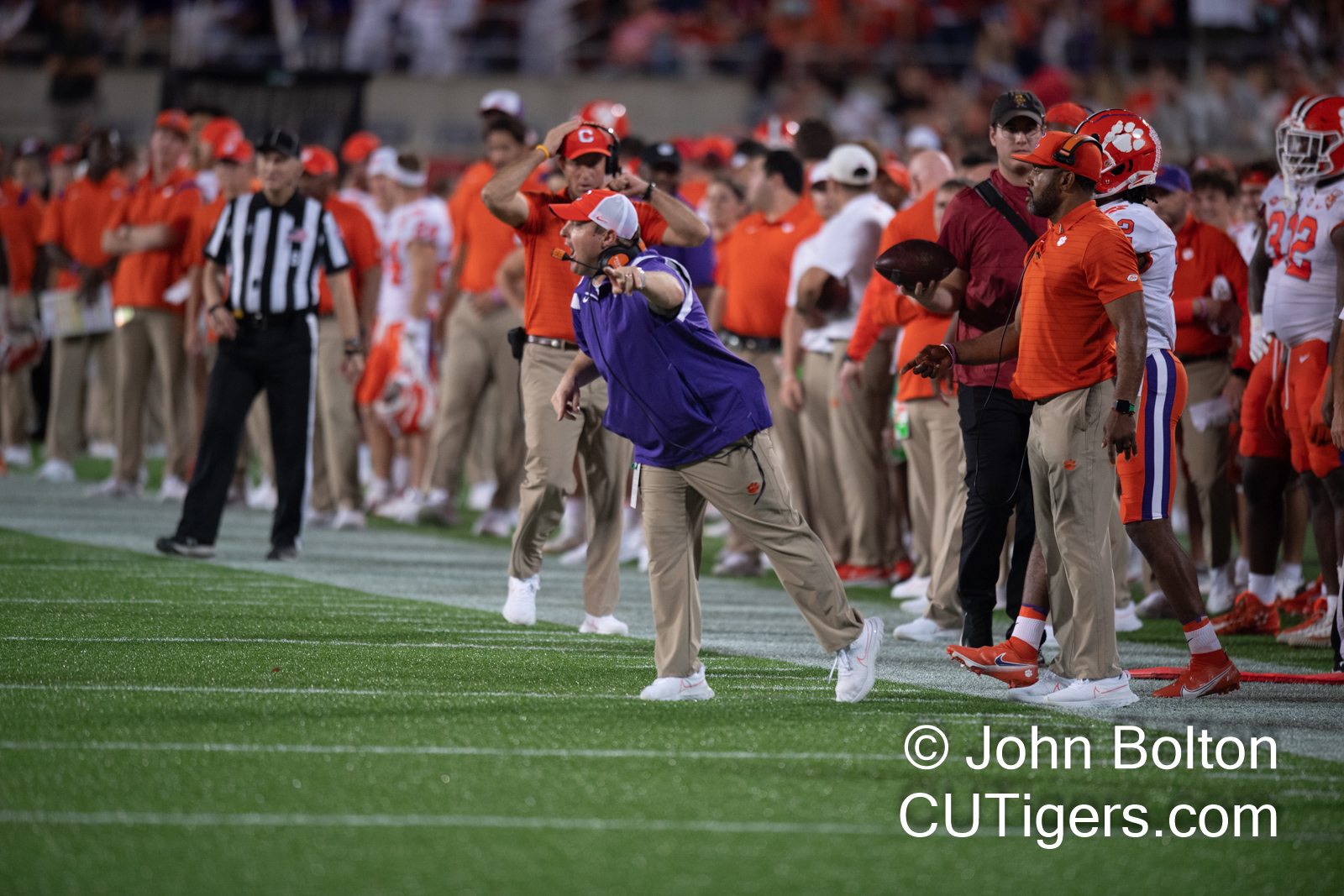 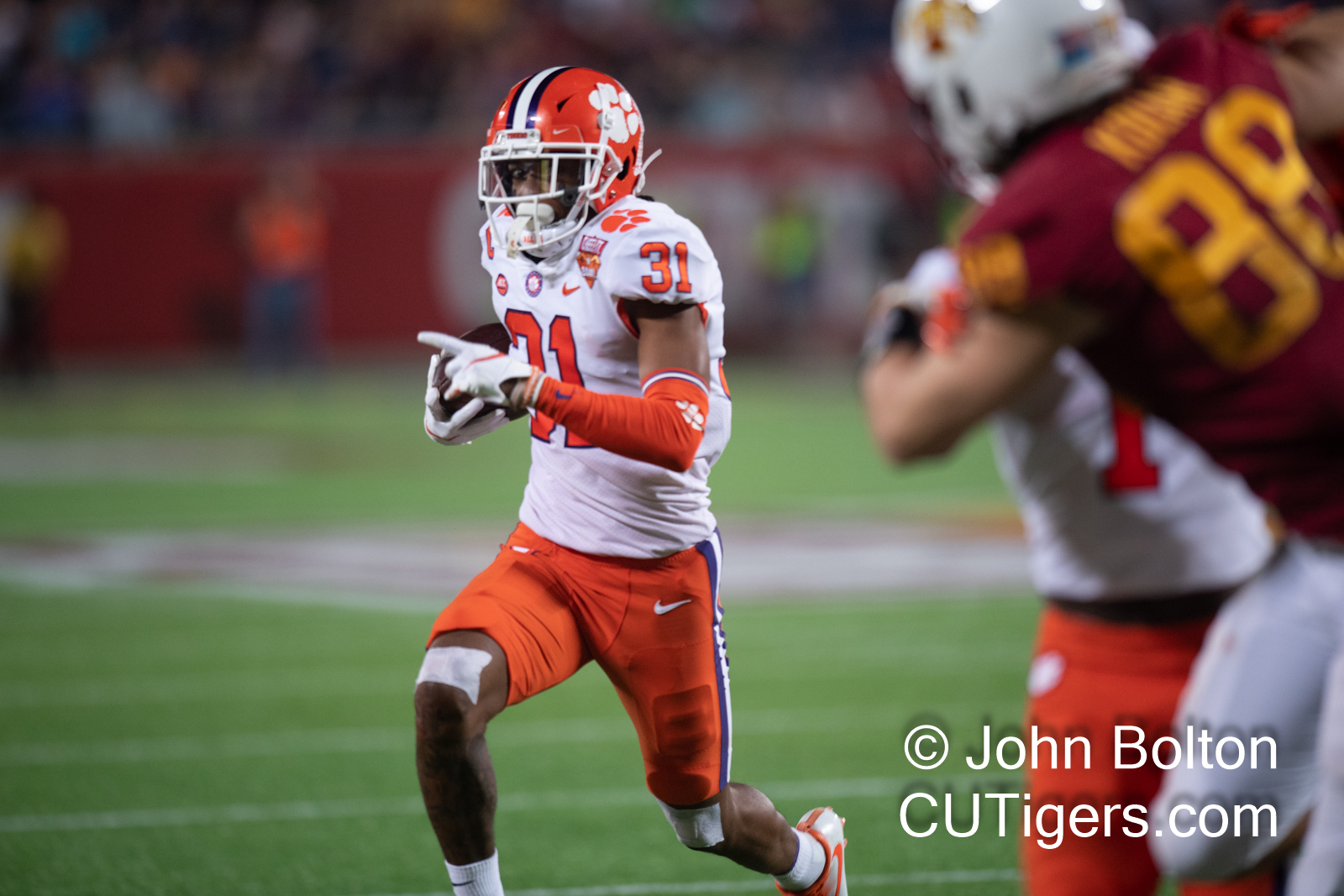 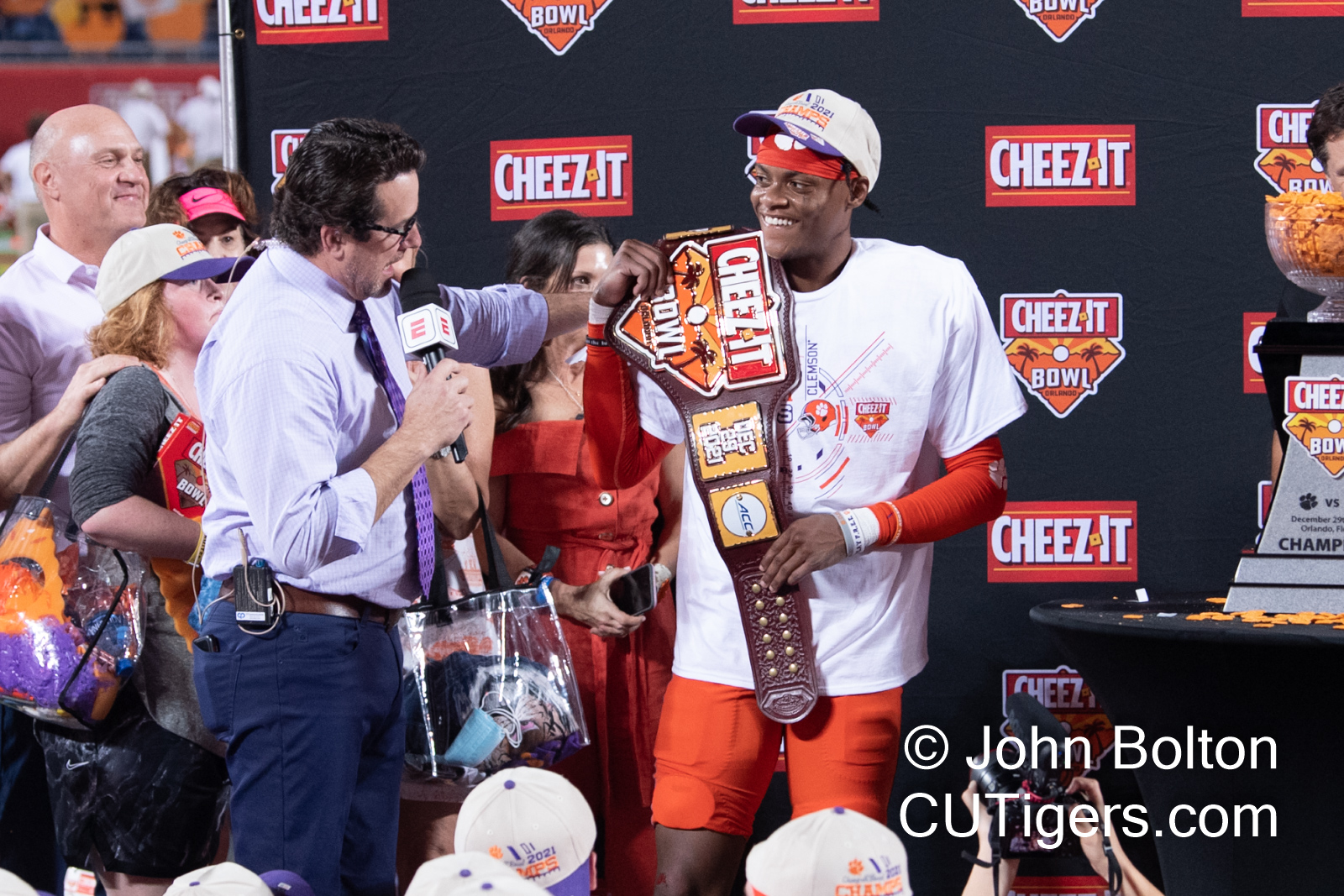 What a game by Mario Goodrich! I didn't have to think at all in voting for him to be MVP of the game, and that's rare for a defensive player. Nobody in the media talked about Goodrich much because all of the attention was on Booth, who is expected to be a first-round NFL Draft pick. About half-way through the season, I asked Dabo about the season Booth was having because he's been one of the unsung heroes of this historically great defense. Here's a senior who didn't transfer but waited for his time, kept working and getting better, and it's only fitting that he would be the MVP of the bowl game. His pick-six in the 3rd quarter gave the Tigers a 20-6 lead, and his forced fumble on Purdy on 4th down with 30 seconds left sealed the game for the Tigers. Goodrich was beat in the first quarter on a deep ball by an All-Big 12 receiver, which led to a field goal, but he sure made up for it and then some! 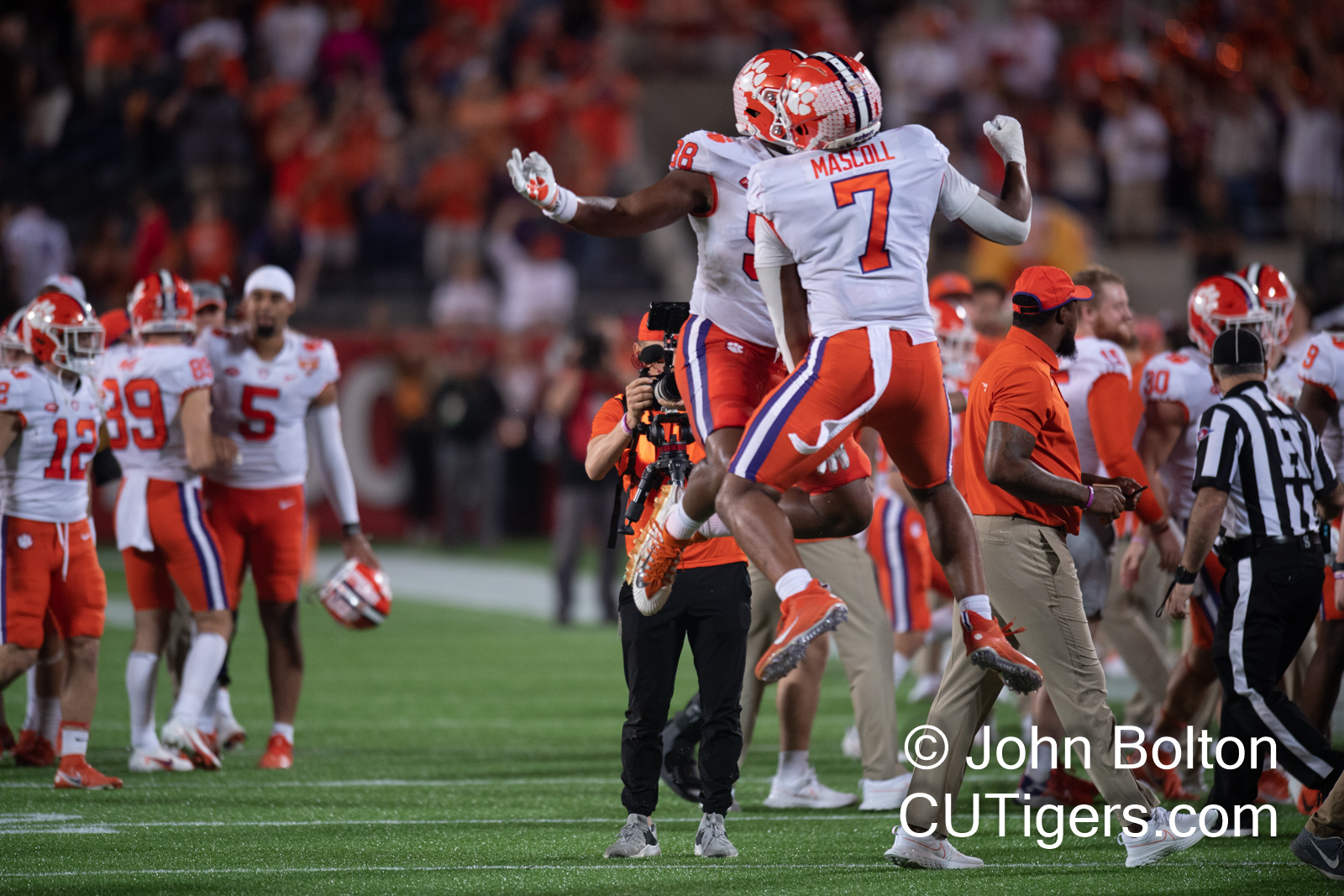 The Tigers are now astoundingly 32-7 in one-score games since 2011, which is by far the best percentage in the nation over that period. Really, they are 33-7 because it was a fumble recovery for a TD as time expired that gave them a two-score win over FSU. What a way for Dabo to win his 150th game! Dabo is just the 3rd coach in history to win that many games in his first 15 seasons, and he is only in his 13th full season! He will likely pass Urban Meyer and Bob Stoops for the most wins ever by a coach in his first 15 seasons. He only needs 16 wins in the next 2 seasons to do so! The Tigers won their last 6 straight games and 8 of 9 to finish 10-3. They might not finish in the top 10 of the final rankings, but this is a top-10 team. No other team, except maybe Alabama, will be as close to being undefeated as the Tigers. Even Georgia had a blowout loss to Alabama. Whatever their final ranking, I guarantee the Tigers will be back with a vengeance next season! It will be an exciting quarterback battle this spring between DJ and freshman Cade Klubnik, who was the Elite 11 MVP, so stay tuned right here for all your Clemson football and basketball coverage! Post-game interviews, highlights and notes are below. 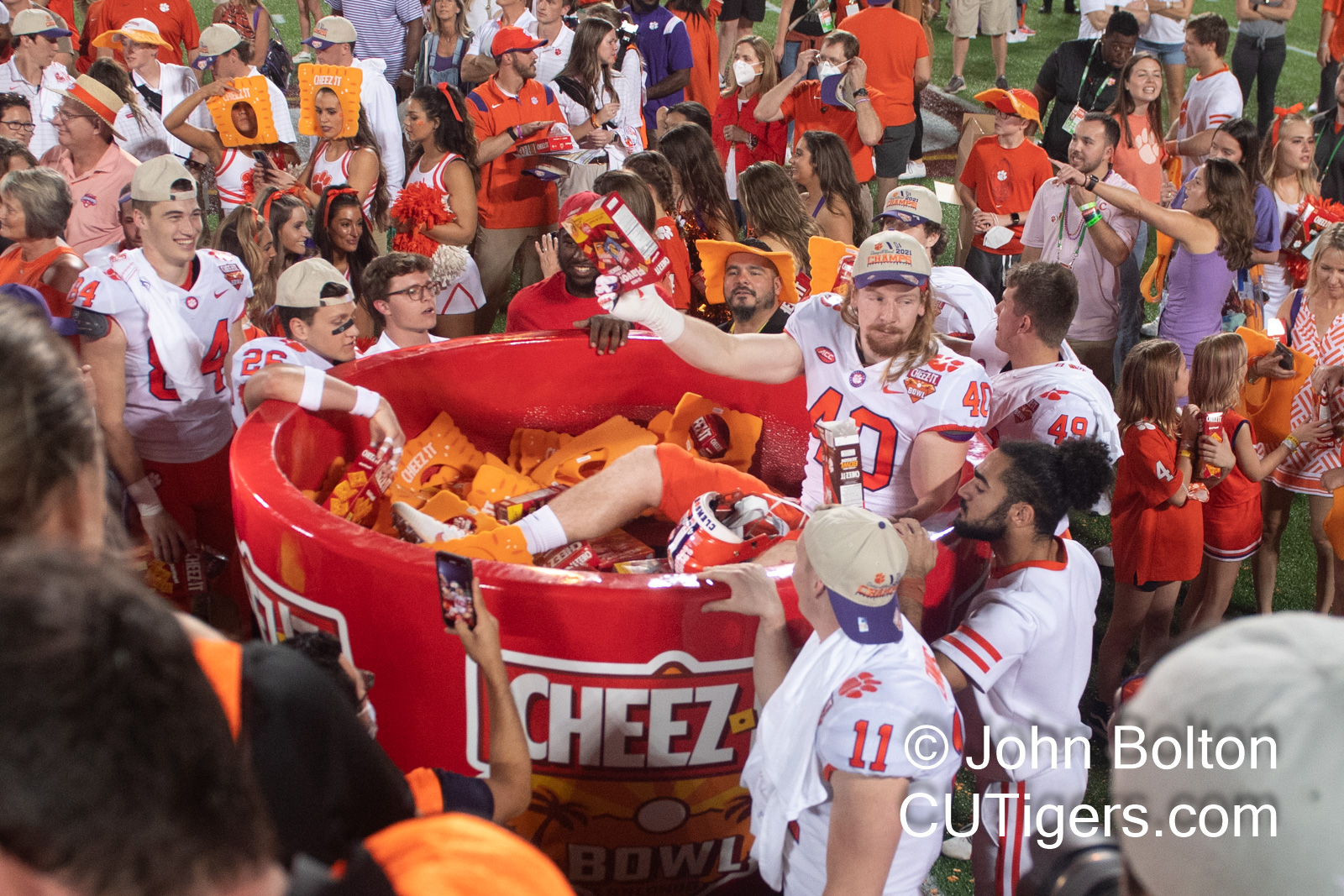