CLEMSON, SC - The Tigers were coming off their worst loss of the season, a 72-56 loss at Notre Dame. I expected them to rebound strong at home against Boston College, the worst team in the league, and that's exactly what they did in the first ten minutes. The Tigers opened up a 34-11 lead, and it looked like they would cruise. Just about everyone would have expected BC to pack it in at that point. The Eagles hadn't won a road game in about 2 years after all, and there was no reason for anyone to believe they would overcome that kind of a deficit on the road against a Clemson team that had just one loss at home all season, a couple weeks ago against UVA.
However, local Anderson product Brevin Galloway had other ideas. His little brother, Braden Galloway, who recently announced he would be leaving Clemson, had played tight end for the Tigers since 2018, and he was in the stands watching with their mother. Brevin came off the BC bench to spark the Eagles' comeback and have the game of his life. He went 5-10 from the arc for 18 points, doubling his season average, and he hit a 3 with 26 seconds left to give the Eagles their first lead of the game. From the opening tip, BC had never even tied the game until 1:48 left. However, after the Tigers led by 23 in the first half, the Eagles began chipping away with 3-pointers and cut the lead to 7 at the half.
It was a monumental meltdown by the Tigers, the likes of which we haven't seen in probably 10 years, certainly not in recent history. Blowing big leads is not new to the Tigers this season--they had blown double-digit leads a few times away from home earlier in the season--but nothing like this and certainly not in Littlejohn. Interestingly, Brad Brownell went with a new starting five for the first time this season, replacing point guard Nick Honor with sharp shooter Alex Hemenway. Perhaps he made the change because of the poor performance at Notre Dame or perhaps because Honor's offense has cooled over the last few weeks. It seemed to pay off early, as Dawes ran the point and was red-hot early in the game. He scored 17 in the first half, but he disappeared with a scoreless second half. And Hemenway went 1-6 for just 3 points. Transfer David Collins had a wonderful second half, but unfortunately he couldn't come through when the Tigers needed it most. He missed the would-be tying shot in the last minute, then missed a wide-open layup to tie in the final seconds. He was fouled and had one more chance to tie the game with two free throws, but he missed the first. 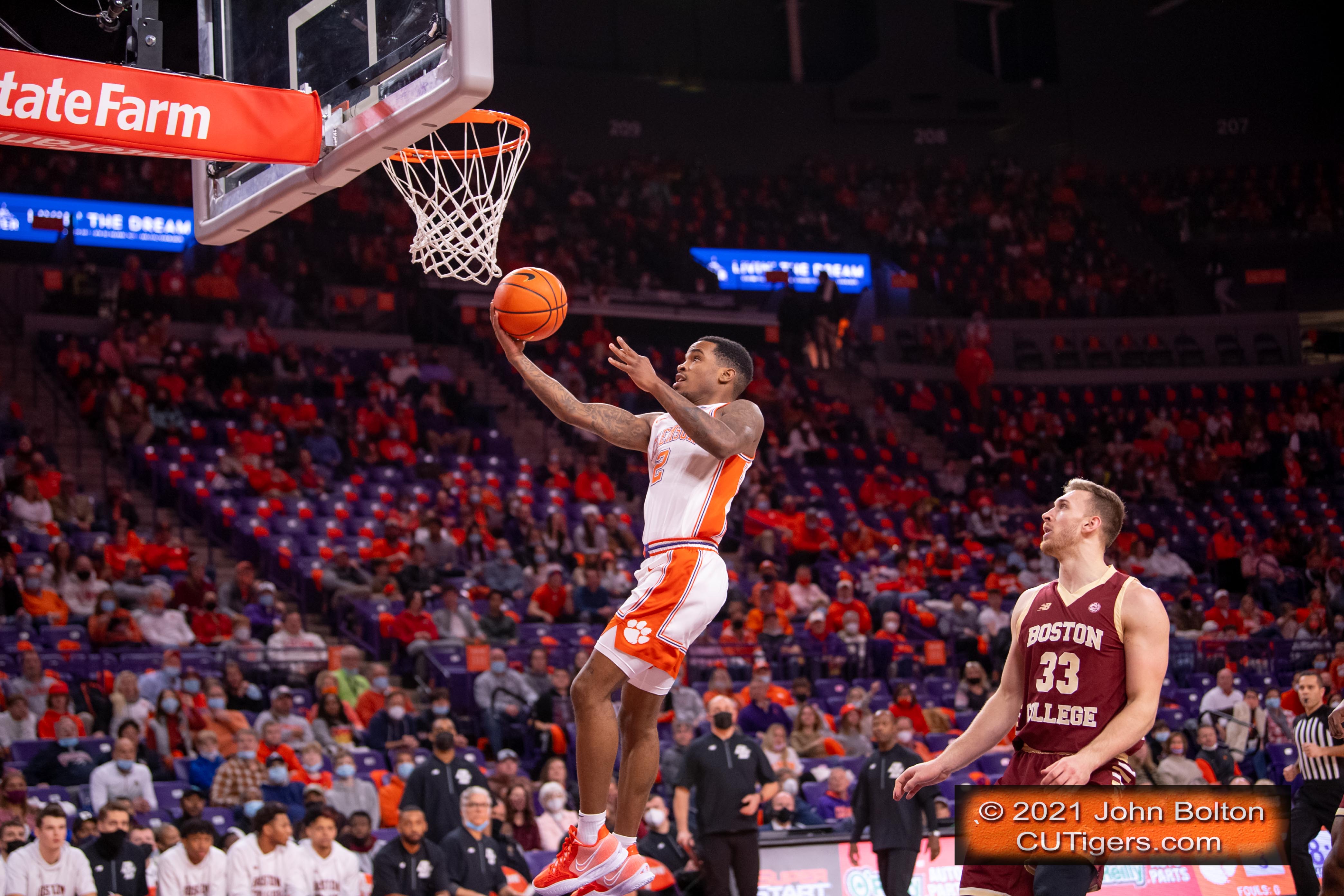 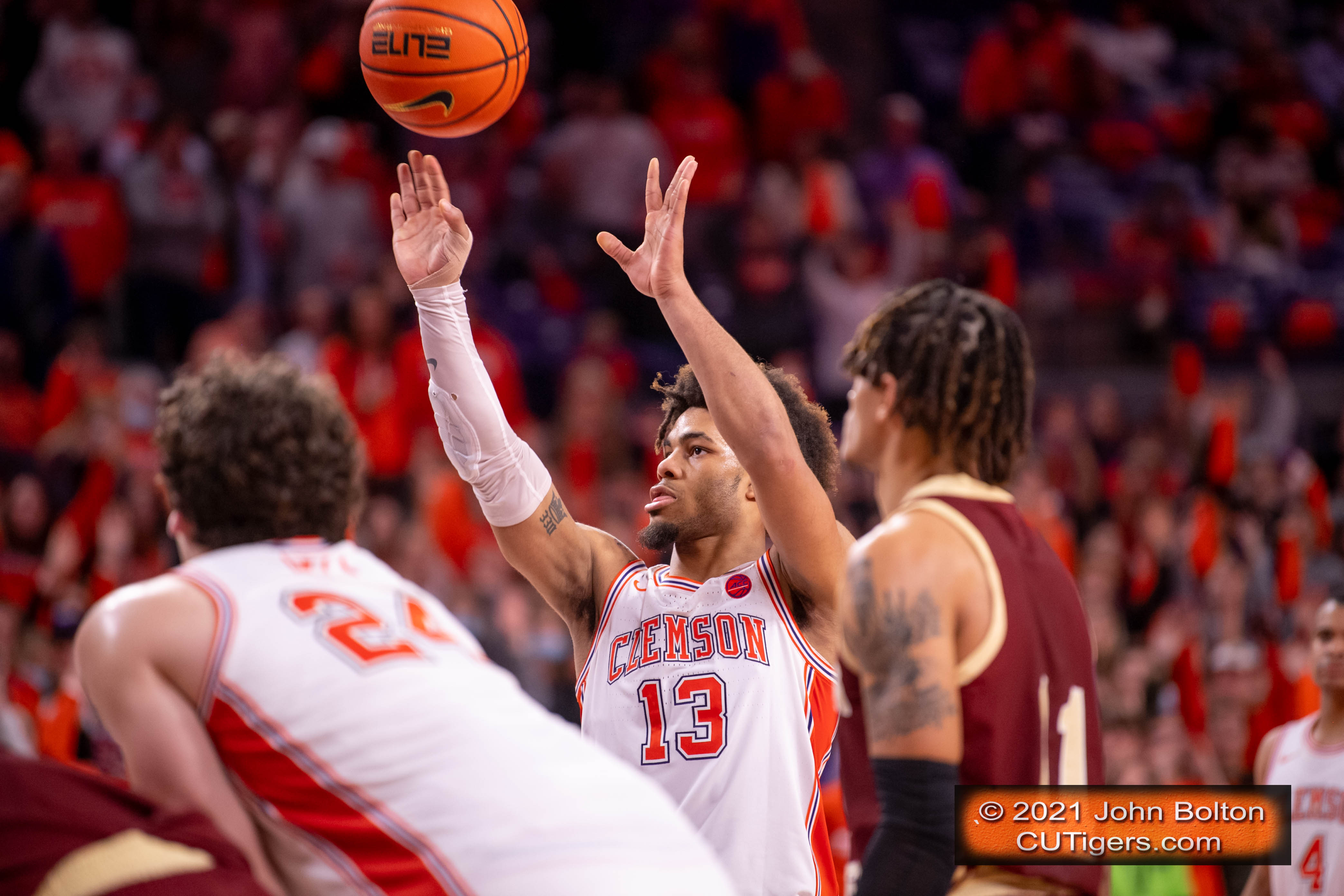 The Tigers were having a relatively good season compared to expectations, and they should have been 3-3 in the ACC after this game, but this loss will be tough to swallow--especially if they are on the NCAA bubble at the end of the season. To make matters worse, they have to to to the Carrier Dome next to play Syracuse, which also has its back to the wall with some blown leads. Incidentally, Boston College's new head coach, Earl Grant, was an assistant at Clemson during Brownell's first four years as Head Coach. Grant coached at College of Charleston before taking over at BC this season, and he brought Brevin Galloway with him from C of C. So perhaps this epic comeback was simply in the stars for Grant and Galloway, but it sure does sting for the Tigers. It also tarnished the halftime celebration of the Clemson Men's Soccer National Championship (seen above). We'll see if Brownell can right the ship in Syracuse.
Post-game interviews are below!
MORE CLEMSON BASKETBALL AND FOOTBALL COVERAGE HERE