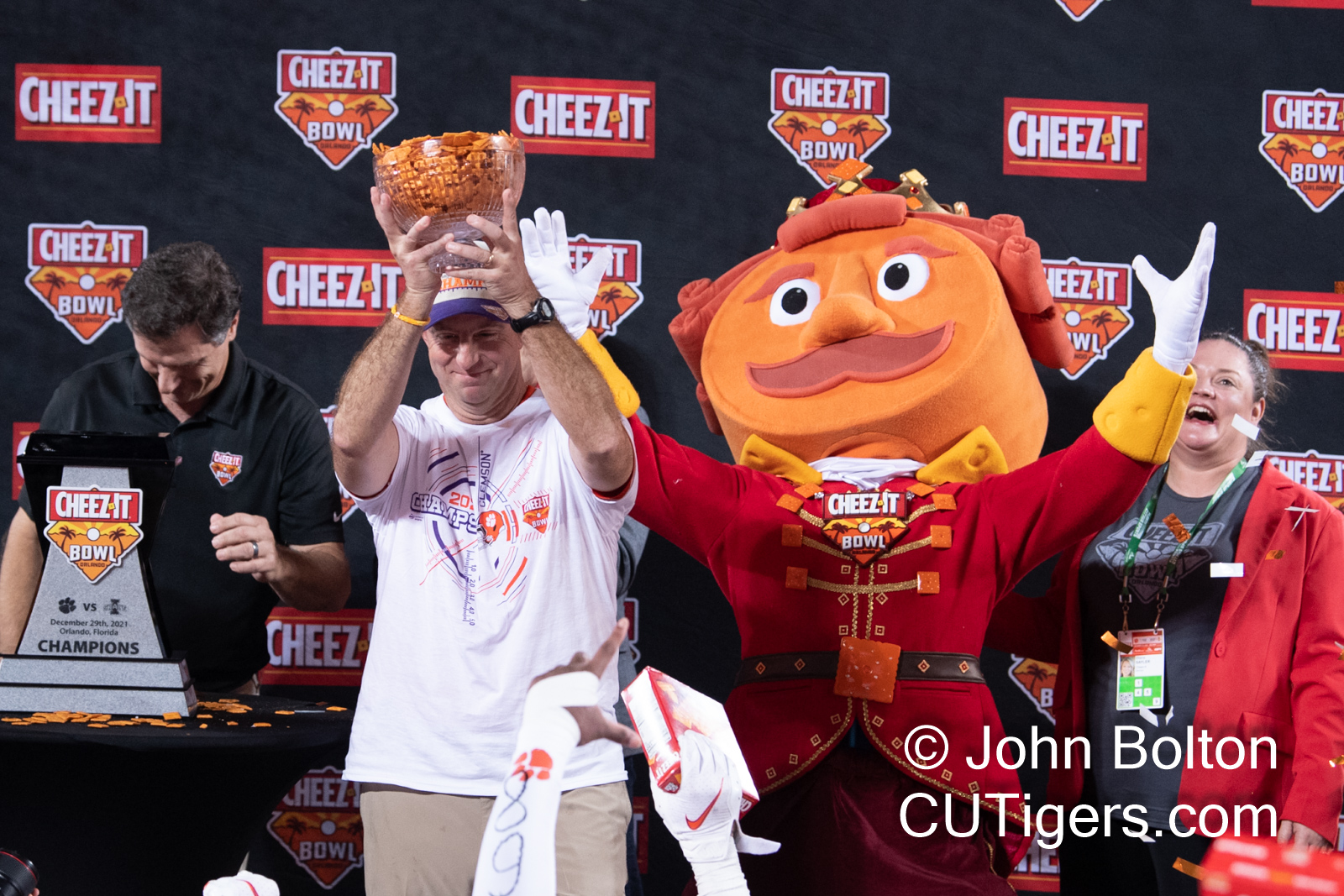 The Tigers really couldn't have hoped for a better schedule. Amazingly, there are no Thursday or Friday night road games for once! I love that the opener is on Labor Day night so I get to watch all of the opening weekend games, and I finally get to go to a game at Mercedez-Benz Stadium in Atlanta! The biggest thing that jumps out to me is that tough 4-game stretch to end the season, but the last 3 are at home, and they have a bye before the biggest game of the season, at Notre Dame. It's gonna be cold in South Bend, but thankfully they play at BC in early October.
Circle that week 4 game at Wake as a potential tough game. They have Hartman back at QB, and ESPN has them ranked No.14 preseason. I don't think Wake will be as good as last season, but if the Tigers don't have the QB situation resolved by then, it could be trouble. Dabo is undefeated against Wake, having won all 12 games, so they are due. The win streak against NC State ended last year with an early-season road game. Hopefully it won't be deja vu! That game might be even more of a test than at Notre Dame, which is late in the season and following a bye. However, if DJ or Cade has played well in the first 3 games, albeit against lesser competition, the Tigers should be fine. The next week, they host NC State, which returns QB Devin Leary and is ranked No.8 by ESPN, so that will be back-to-back ranked opponents early on.

(Home games BOLDED; all games on Saturday unless otherwise noted)

The team plans to hold its annual Spring Game at 1 p.m. on Saturday, April 9. That annual Orange and White scrimmage will be televised on ACC Network. Gameday designations for the 2022 season will be announced at a later date.

More information on ticketing for the 2022 Clemson Football season will be available by visiting ClemsonTigers.com or by calling 1-800 CLEMSON. Fans can also gear up for the 2022 football season online at the Clemson Tigers Store.

One year after opening the 2021 season at the home of the NFL's Carolina Panthers, Clemson will open the 2022 campaign at the home of the NFL's Atlanta Falcons, marking the first time Clemson has opened back-to-back years in NFL facilities. The contest, which is classified as a Georgia Tech home game despite being moved off-campus, will represent Clemson's second season opener against Georgia Tech in the Dabo Swinney era, joining a 52-14 home win against the Yellow Jackets to open the 2019 season in the first live game ever played on ACC Network.

On a short turnaround, Clemson will face Furman for the Tigers' home opener on Sept. 10 as part of Clemson's annual non-conference scheduling philosophy of facing two Power Five conference opponents, a Group of Five conference opponent and an in-state Football Championship Subdivision squad. Clemson is 96-17-8 in home openers against 38 different opponents all-time, and the Tigers are 36-0 against FCS opponents since Division I split in 1978, winning 35 of the 36 games by double digits.

Clemson and Louisiana Tech will square off for the fourth time in series history, as, under Tommy Bowden, Clemson went 3-0 against the Bulldogs including a 51-0 shutout victory in the squads' most recent meeting in 2006. The Sept. 17 date should hopefully result in better weather than the teams' first meeting, which took place in Boise, Idaho in the 2001 Humanitarian Bowl when Clemson earned a 49-24 win in snowy conditions that featured the second-coldest recorded kickoff temperature in school history (32 degrees).

Wake Forest last defeated Clemson on Oct. 9, 2008, a loss that led to the departure of Head Coach Tommy Bowden and led to the elevation of Swinney four days later. In the time since, Clemson has posted a 13-0 record against the Demon Deacons, making Wake Forest one of five ACC programs against whom Swinney is undefeated (Duke, Louisville, Virginia and Virginia Tech). Clemson will try to add to that 13-0 mark when the Tigers and Demon Deacons square off on Sept. 24.

After a tough double-overtime loss in Raleigh a season ago, Clemson will await its rematch with NC State in Death Valley on Oct. 1. Clemson has suffered only 36 losses under Dabo Swinney and has had 27 previous opportunities to avenge its most recent loss against an opponent, going 18-9 in those contests. Outside of NC State, there are eight opponents against whom Swinney's squads are awaiting a rematch since Clemson's last loss in the series: Nebraska, TCU, USF, West Virginia, LSU, Ohio State, Georgia and Pitt. Swinney will attempt to move to 11-2 against NC State all-time.

After scheduling oddities from the COVID-19 pandemic resulted in Clemson hosting Boston College three straight seasons from 2019-21, Clemson will return to Chestnut Hill on Oct. 8 to face Boston College on the road for the first time since 2018. That year, Clemson earned a 27-7 prime-time win in College GameDay's featured game to clinch the ACC Atlantic Division as part of a 15-0 national championship season. Clemson has won 11 straight games in the series, its seventh-longest winning streak against a single opponent all-time and its fourth-longest against an opponent presently in the Football Bowl Subdivision.

Clemson will carry a six-game series winning streak dating to 2015 into Florida State's Doak Campbell Stadium on Oct. 15. With a win, Clemson would join the 1968-76 Florida Gators (eight straight) as the only programs ever to win seven straight against the Seminoles. Clemson would also become the first ACC school to win three straight games in Tallahassee, as the Tigers collected a 37-34 road win in 2016 and a 59-10 road win in 2018, with both seasons culminating with national championship victories.

A Clemson win on Oct. 22 would push the Tigers' winning streak in their series with Syracuse to five games, which would extend Clemson's current streak past its four-game streak from 2013-16 as the longest in series history. Since dropping the programs' first meeting in the Gator Bowl following the 1995 season, Clemson is 8-1 in the teams' nine most recent meetings and holds an 8-2 all-time record in the series. Clemson has been ranked in at least one major poll in all 10 games against Syracuse and has been ranked in the AP Top 3 in seven of those contests.

Two historic programs will look to add another chapter to a series that has produced a number of memorable moments in recent years. The Tigers are 4-2 all-time against the Fighting Irish, and the programs split two meetings in 2020 in Notre Dame's lone season of ACC membership. Clemson won the teams' most recent matchup, a 34-10 win in the 2020 ACC Championship Game, avenging a 47-40 double-overtime loss at Notre Dame earlier that season in which several key players, including quarterback Trevor Lawrence and linebacker James Skalski, were unavailable. Quarterback DJ Uiagalelei threw for 439 yards in Clemson’s last trip to Notre Dame, the most all-time by any player against the Irish.

Clemson will enter its 2022 home date with Louisville on Nov. 12 boasting a 7-0 all-time record against the Cardinals, one of two FBS programs against whom Clemson has won its first seven all-time games. A year ago, Clemson overcame a 24-17 deficit after three quarters and earned a win with a dramatic goal-line stand from the two-yard line in the final minute. Including a comeback win a week earlier against Florida State, the victory at Louisville gave Clemson fourth-quarter comeback wins in back-to-back games for the first time in the Dabo Swinney era.

Clemson will welcome the Miami Hurricanes to Death Valley on Nov. 19, marking the teams' first meeting since 2020. In that game, a prime-time audience and the ESPN College GameDay crew witnessed as No. 1 Clemson routed No. 7 Miami, 42-17, in the rain in the fifth matchup of AP Top 10 teams in Memorial Stadium history. Clemson is riding a three-game winning streak in its series with Miami, including wins in 2015, 2017 and 2020 by a combined score of 138-20.

Clemson fans' long wait will be over on Nov. 26 when the Clemson-South Carolina rivalry will return to Death Valley for the first time since 2018. Clemson will attempt to set a series record with its eighth consecutive win in the rivalry, as the Tigers enter the contest tied with the 1934-40 Clemson squads (seven straight) for the longest winning streak by either team in series history. Clemson is coming off of a 30-0 win against South Carolina in 2021 and hasn't surrendered a touchdown to the Gamecocks since 2018.