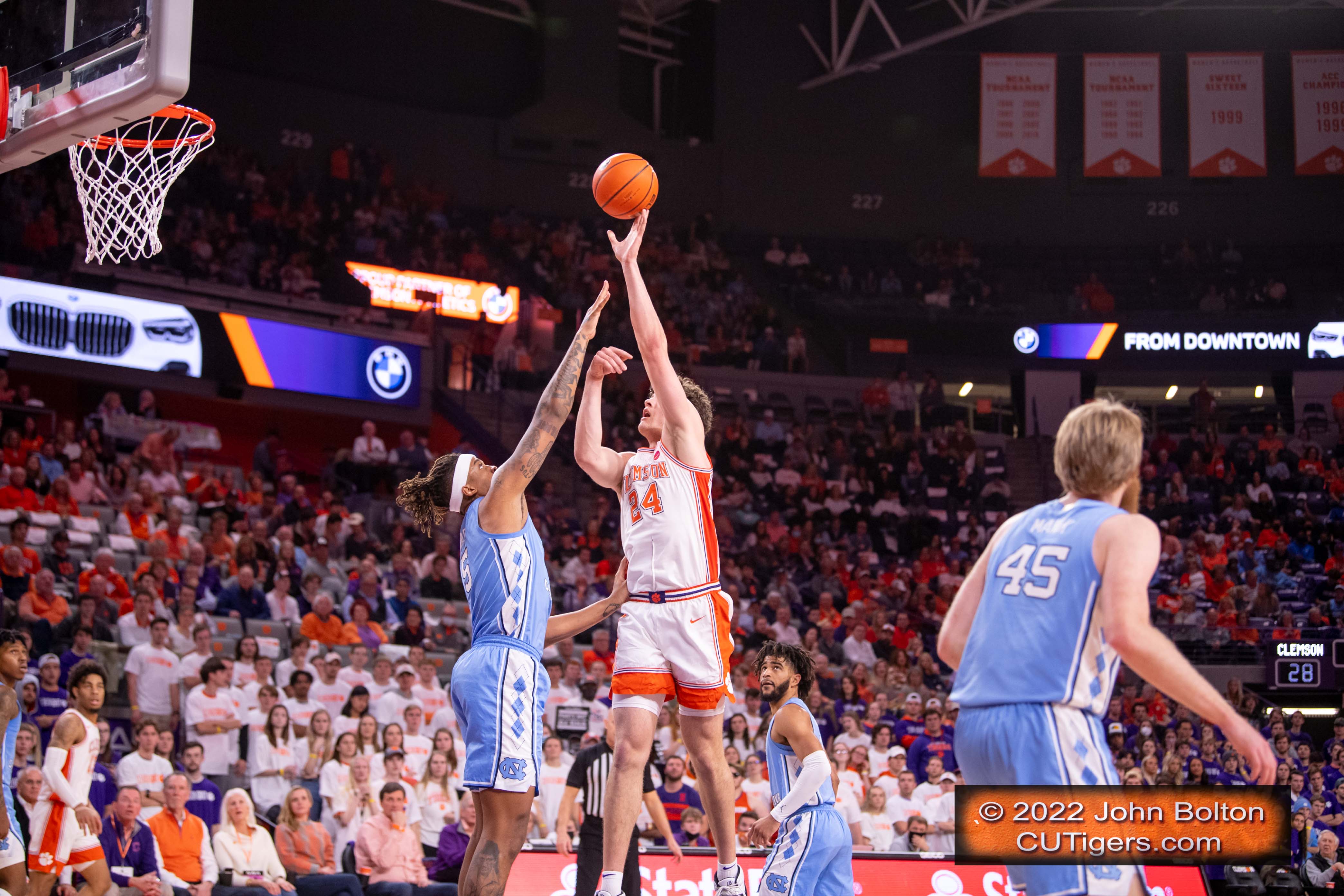 
CLEMSON LOSES ANOTHER HEARTBREAKER, 79-77 TO UNC

CLEMSON, SC - The Tigers have had neither luck nor timing on their side this season. Just when they were playing their best and gaining momentum, with a blowout win over Pitt, a near win at No.9 Duke and a win over FSU, their second-best player and team leader, Hunter Tyson, suffered a broken clavicle and will miss the rest of the regular season at the very least. Then they lost a hard-fought game at Georgia Tech by 5 points and would have to face their toughest stretch of the season--UNC, Duke and Notre Dame--in a span of 5 days. On top of that, UNC was coming off an embarrassing blowout home loss to Duke and would be focusing their ire on Clemson. 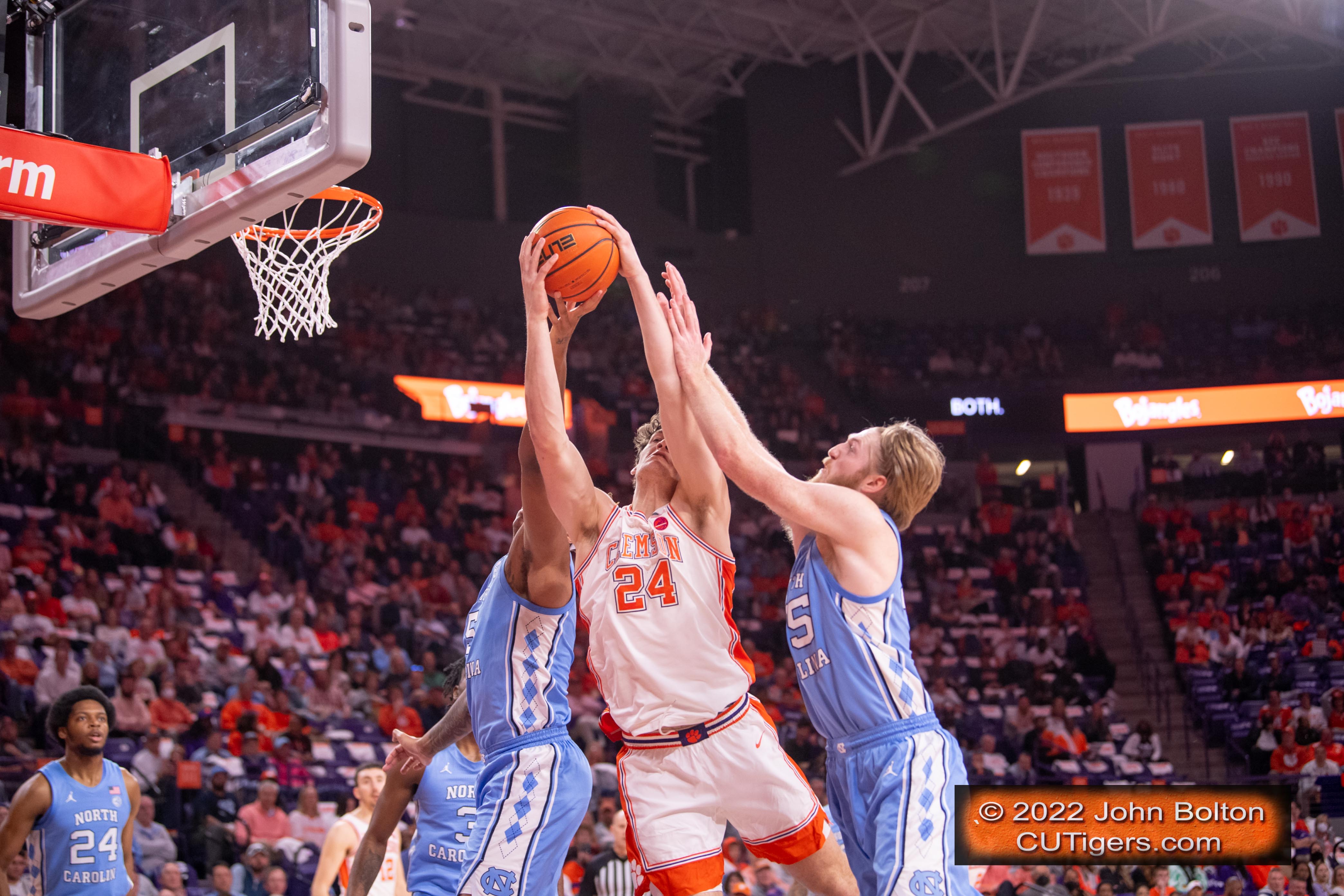 The Tigers fought hard, and it was a back-and-forth game that would come down to the final seconds. With the game tied at 77 and 15 seconds left, Caleb Love found Oklahoma transfer Brady Manek for a layup with 3 seconds left to put the Heels ahead 79-77. The Tigers had done a good job defensively on Manek, who was the lone bright spot for the Heels in their loss to Duke. After scoring 21 in that game, the Tigers held him to just 2 points in the first half, but he scored 9 in the second half, including the biggest basket of the game. Brownell was asked after the game why he decided to take Hall out before the Heels' final possession, and he said that he thought they would drive into him and draw a foul. Hall had 4 fouls, so one more would not only put the Heels on the line with a chance to win, but it would eliminate Hall if the game went to overtime.
With 3 seconds left, Brad Brownell drew up a brilliant play during the timeout, and with 3 passes, the Tigers were able to go 60 feet and find David Collins for a great look at a game-winning 3-pointer, but his shot came inches short, falling off the front of the rim. Collins has not been the Tigers' most prolific 3-point scorer this season, but he was 1-2 in the game and the team leader in 3-point percentage at 45.5% (15-33). That would be good enough for 10th in the nation and 4th in the Power Five if he had enough attempts to qualify. It was a wonderfully devised and executed play that came a couple inches short, and it feels like that's been the story of the season for the Tigers. It's going to be a season of what-ifs. What if they hadn't blown those big leads early in the season and the 23-point lead at home to Boston College? What if Hunter Tyson hadn't been injured on what seemed like a fairly innocuous bump to the shoulder? It was supposed to be a rebuilding year for the Tigers, who were picked 11th in the ACC preseason after losing Aamir Simms and several players to the transfer portal, but they could have been well in contention for an NCAA bid and even the rankings if things had bounced their way.
Sophomore PJ Hall had another great game, scoring a career-high 24 points, despite playing just 11 minutes in the first half due to foul trouble. He went head-to-head with preseason All-ACC first-teamer Armando Bacot and more than held his own. Bacot also scored 24 and was saddled with his 4th foul with almost 12 minutes left. With Hunter Tyson out, freshman Ian Shieffelin stepped up and had his best career game, scoring 12 points. That bodes well for the future. Brownell decided to keep point guard Nick Honor on the bench for the entire second half, feeling that they matched up better against the Heels with Dawes and Hunter on the floor, but Hunter scored just 5 points and Dawes was fairly non-existent offensively for much of the game. He made a 3-pointer in the first minute of the game but didn't score again for 26 minutes, finishing with 10 points. Dawes can be a prolific scorer at times, but in my opinion, he is too passive and goes long stretches without looking to score. Collins also scored 10, and Alex Hemenway came off the bench to score 8 straight points in the second half to get the Tigers to within one. 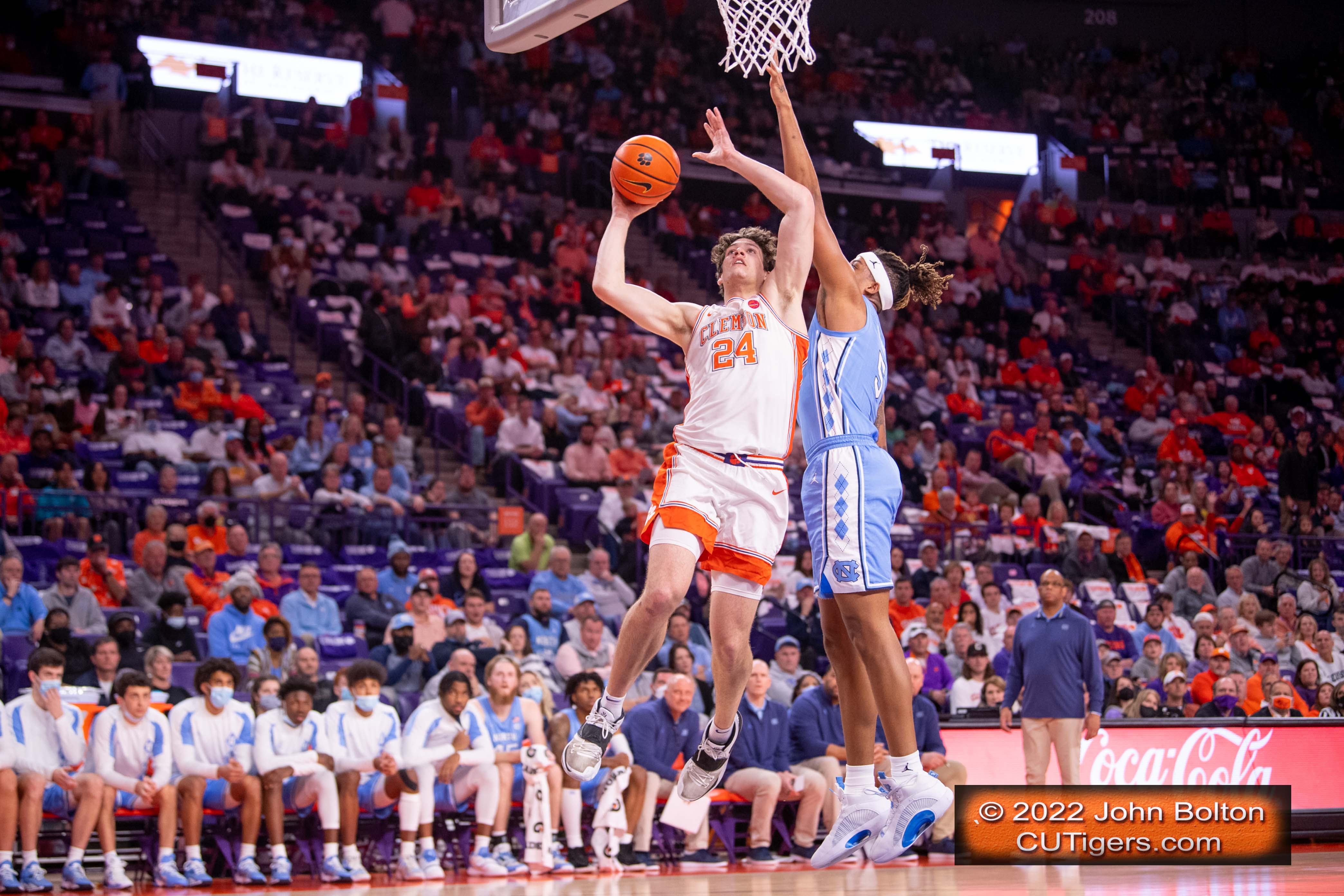 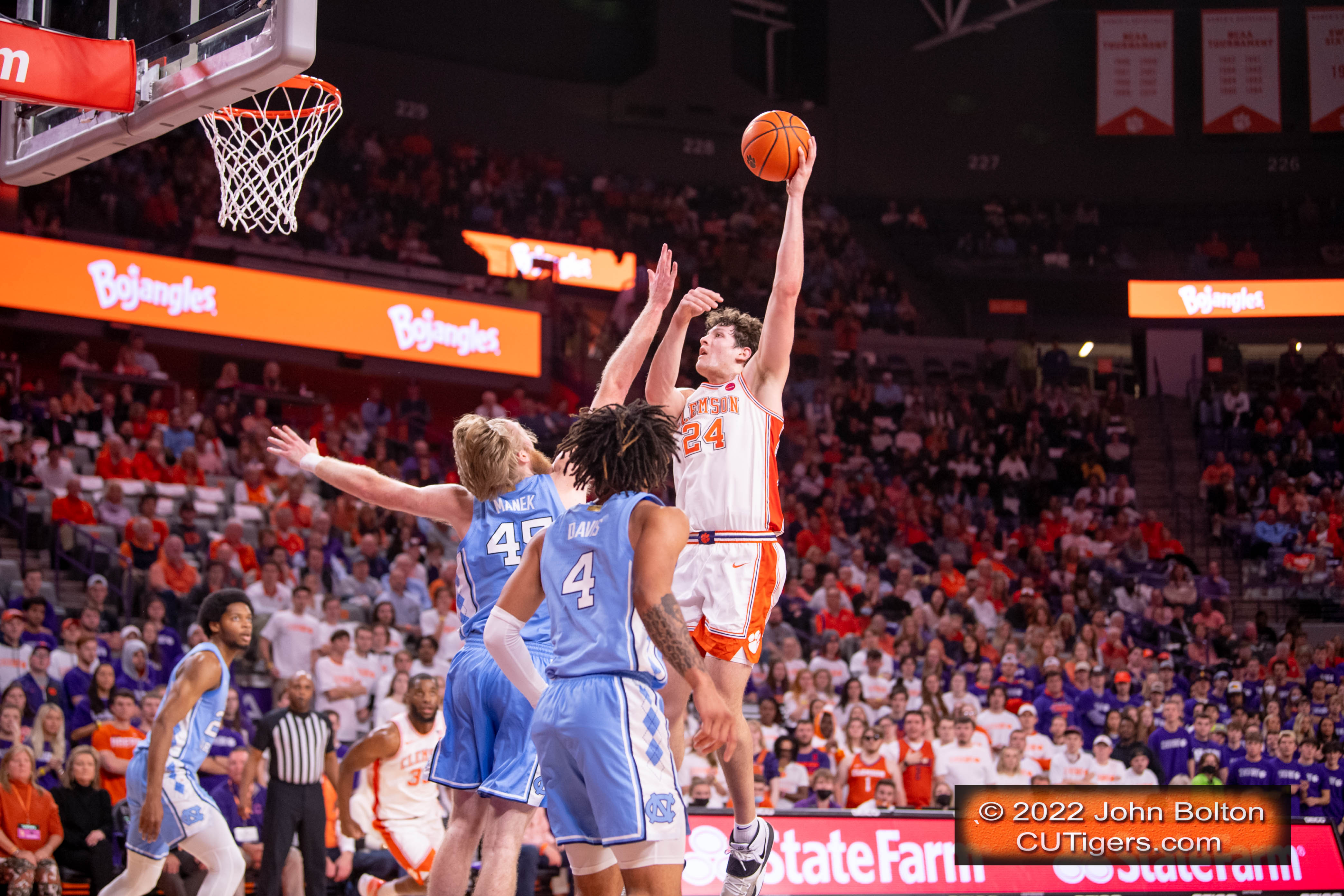 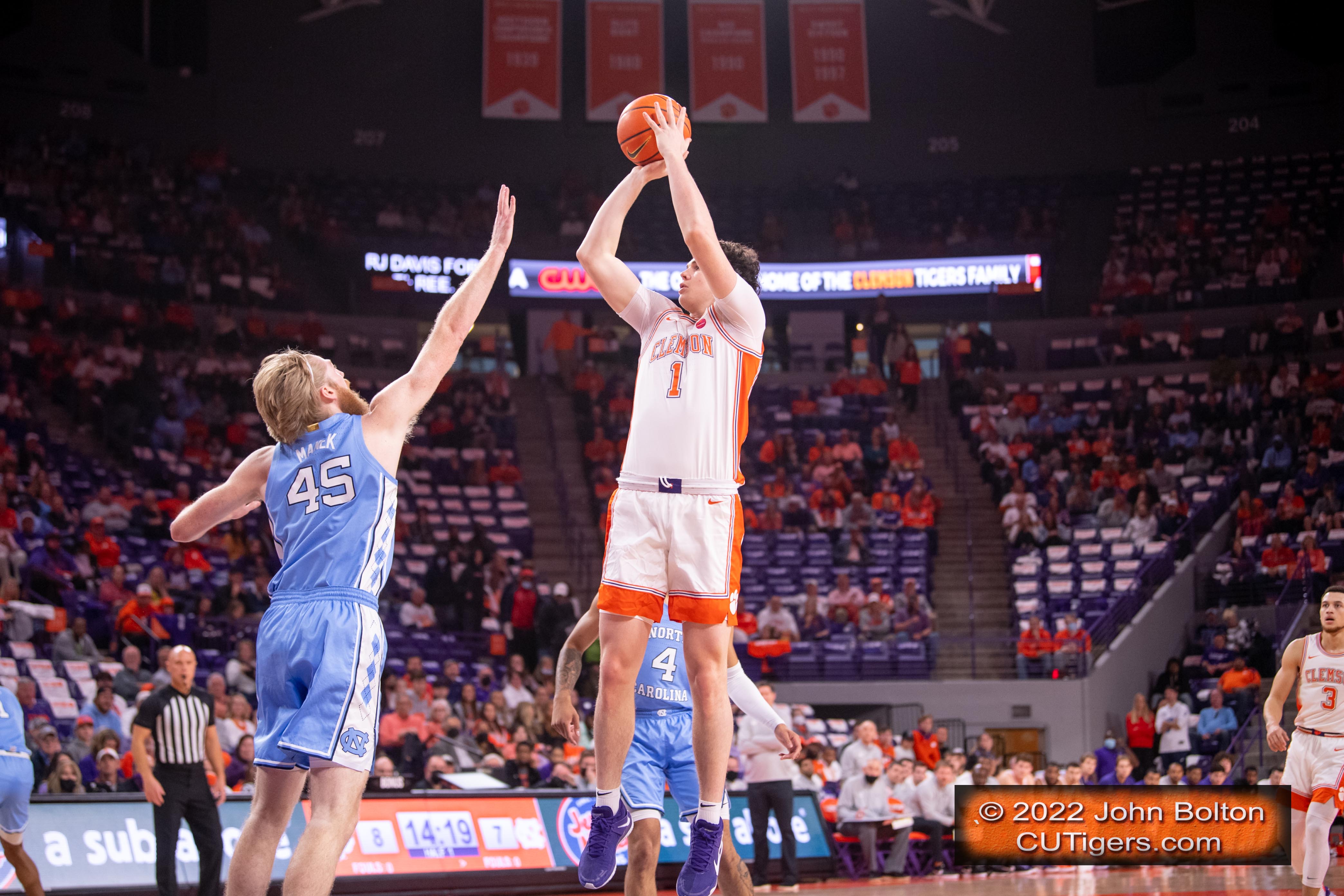 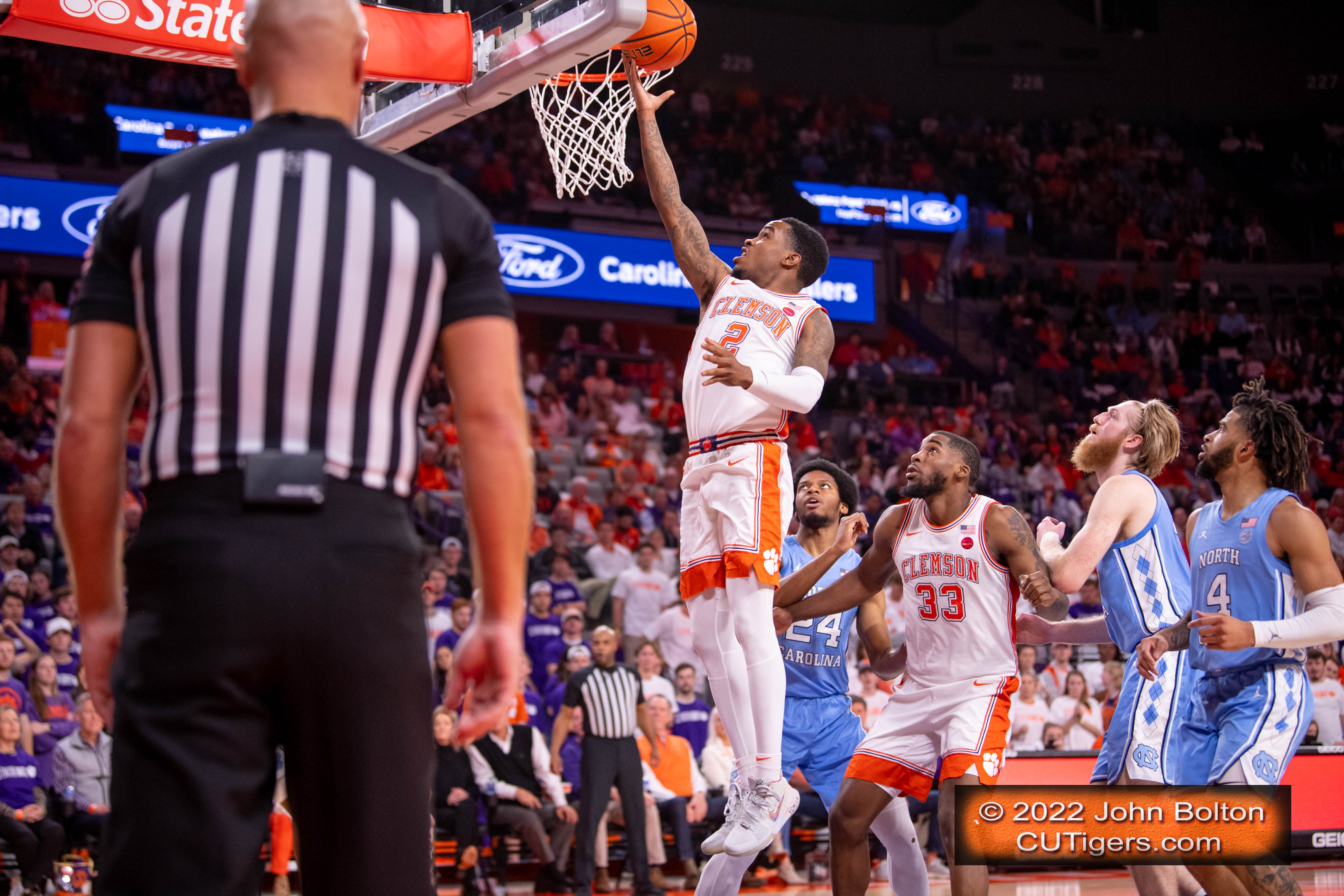 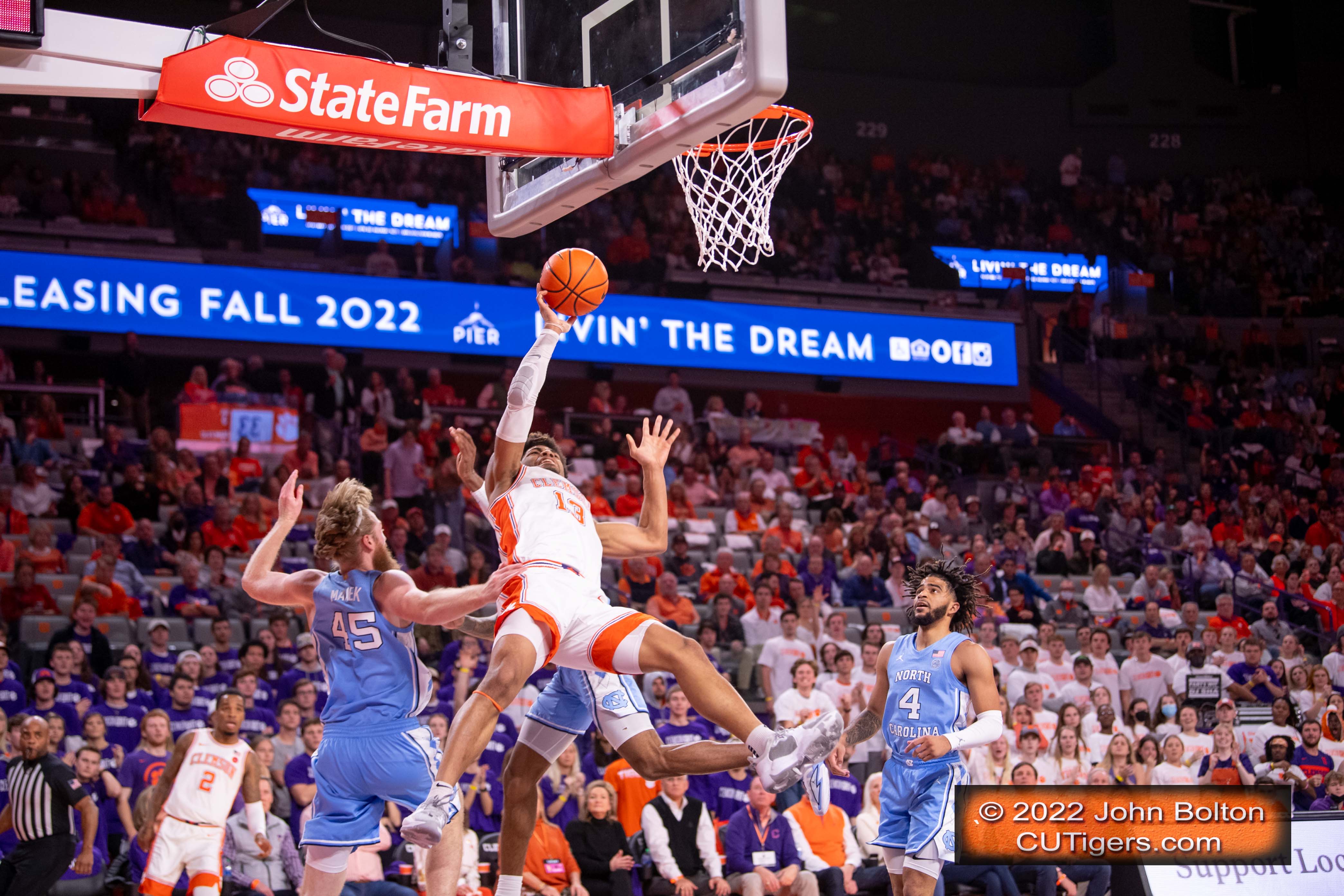 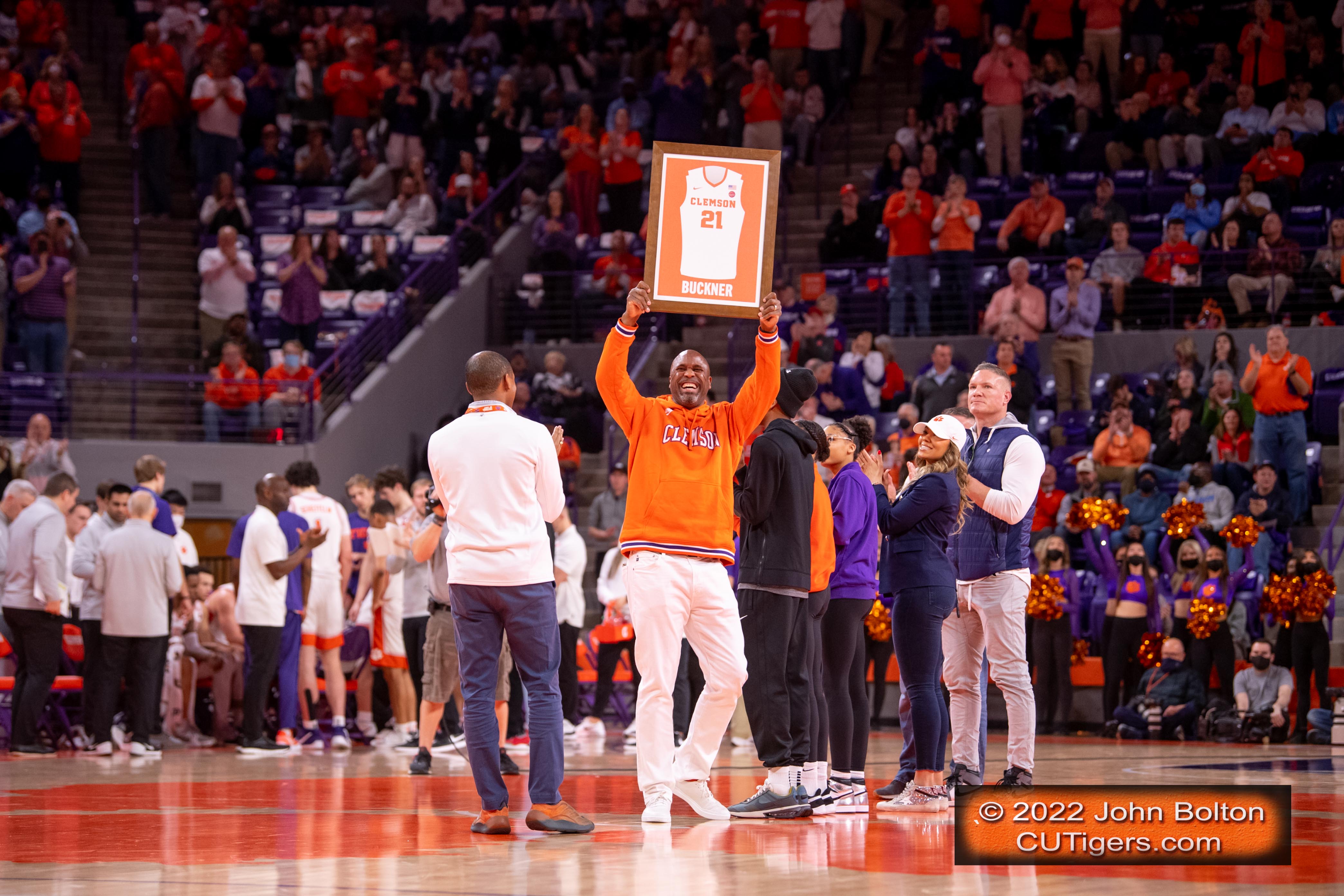 Despite the disappointing outcome, it was a wonderful back-and-forth ACC game to the finish, on a night when Clemson great Greg Buckner had his number retired. I remember being an undergrad at Clemson and watching his famous game-winning shot over UNC in the semifinal of the ACC Tournament, which some consider the greatest win in Clemson history. The Tigers won't have time to stew and lament this loss, which is perhaps a good thing, because No.7 Duke comes to Littlejohn on Thursday. Like the Heels, the Blue Devils are coming off a home loss and will be bringing their A-game, so it's bad timing again for the Tigers. Incidentally, this will be the third straight year that the Tigers have played UNC and Duke back-to-back. They lost at Duke and beat the Heels at home last season, and in 2020, they won a historic game at UNC and followed it with a 79-72 home win over No.11 Duke. Thursday's game will certainly test this team's resolve and mental toughness. If they can pull off the upset, it will give them the confidence they need to turn around on Saturday and play Notre Dame, which is atop the ACC standings, and perhaps it could turn this season around for the hard-luck Tigers.
Post-game interviews and highlights are below!