CLEMSON, SC - As I said on Tuesday, it's never a good thing to face Coach K and Duke after they were upset at home. I knew the Tigers would get one of Duke's very best performances of the season, and that's exactly what happened. Take away two starters for the Tigers--injured Hunter Tyson and David Collins, who was ejected in the first half--and it makes sense that the Devils would pull away in the second half like they did. The Tigers fought hard and got to within 5 points at one point in the second half, but they were simply overmatched and exhausted at the end of the game. Duke also didn't have freshman superstar Trevor Keels in the two-point first meeting at Cameron, and he matched his career high with 25 points. The last time he scored that many was in his first collegiate game against Kentucky to open the season. Keels missed the first Clemson game with an injury and had gradually worked his way back into the mix over the last couple games, but he exploded on Thursday night in Littlejohn and was too much for the Tigers' short-handed front court. 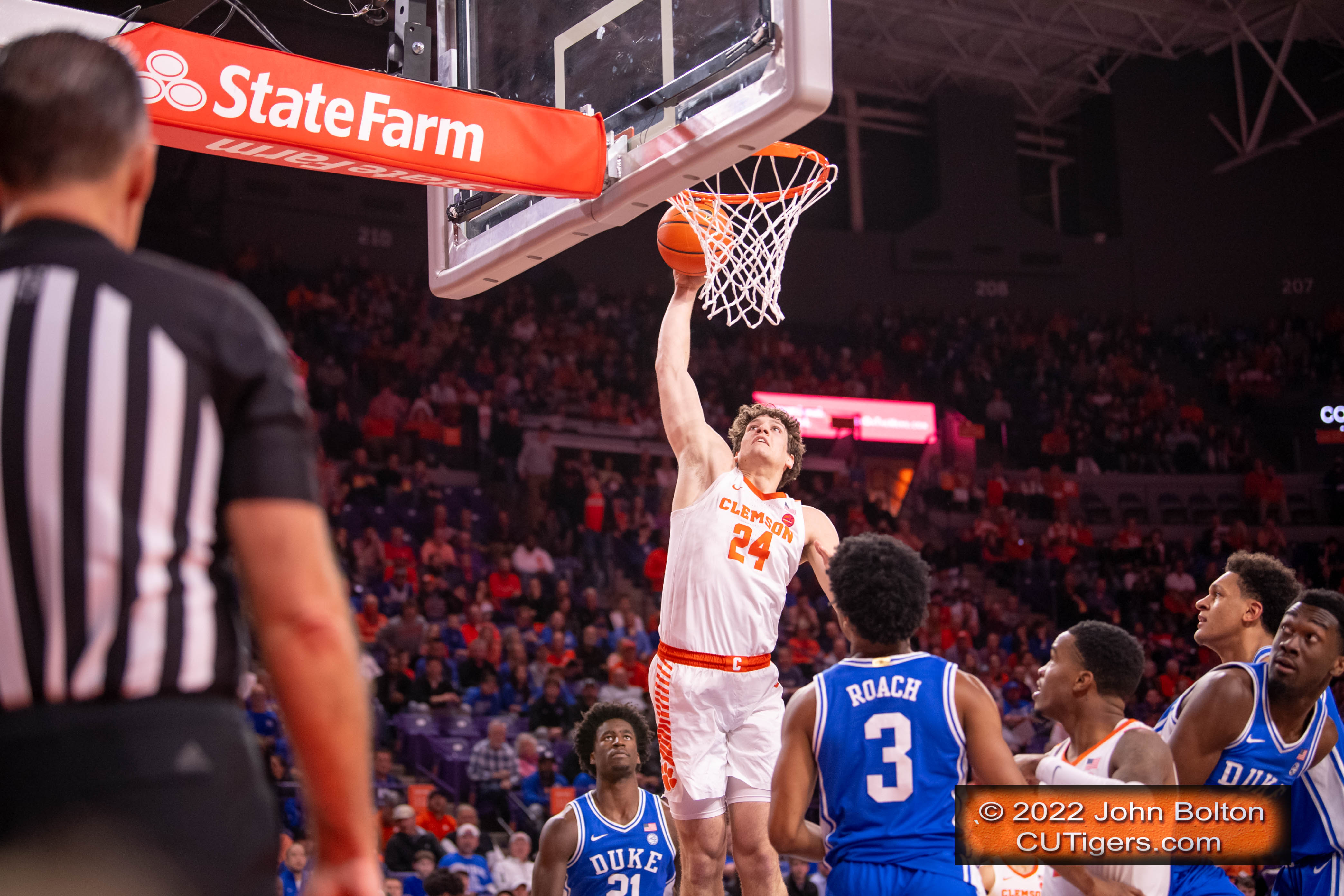 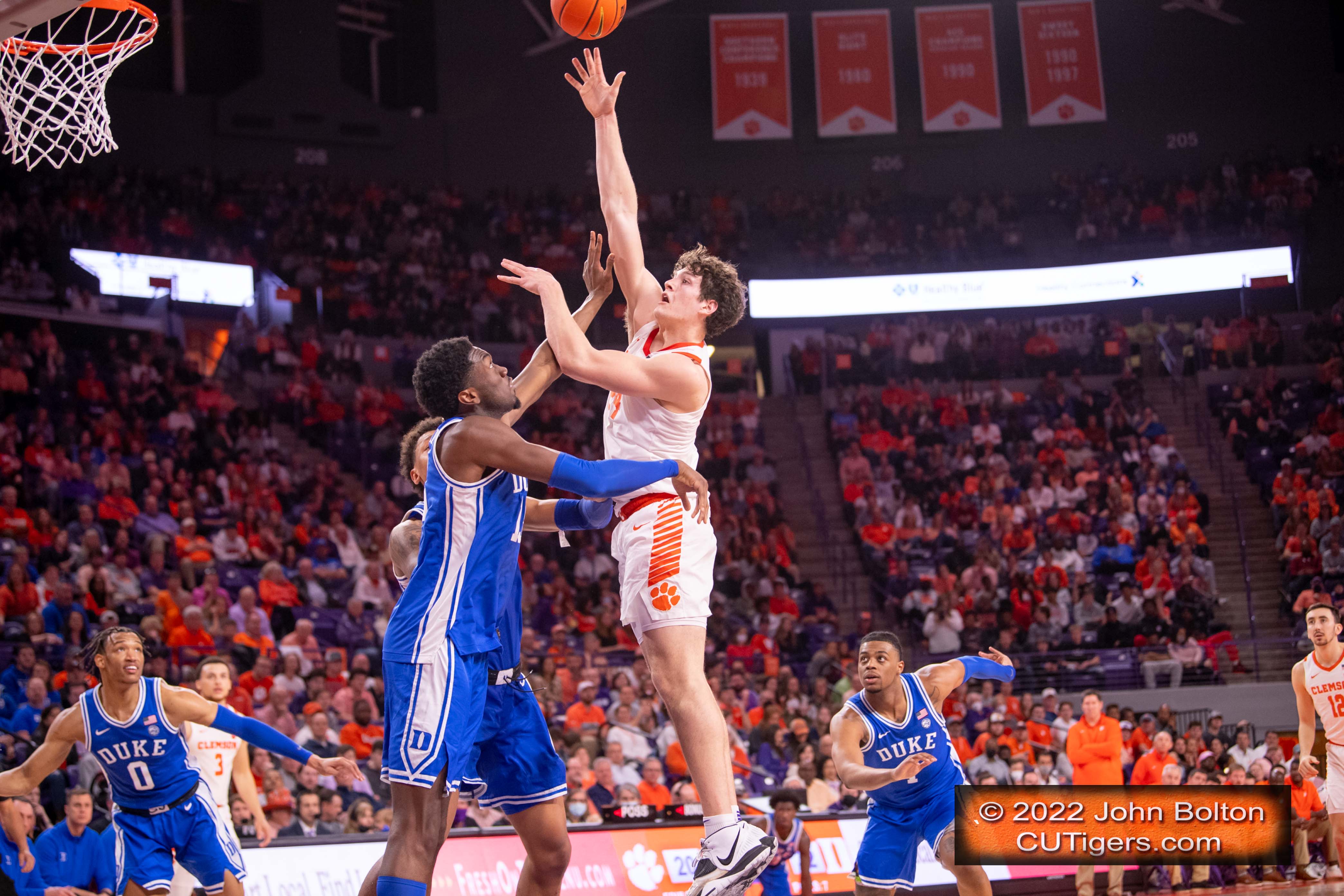 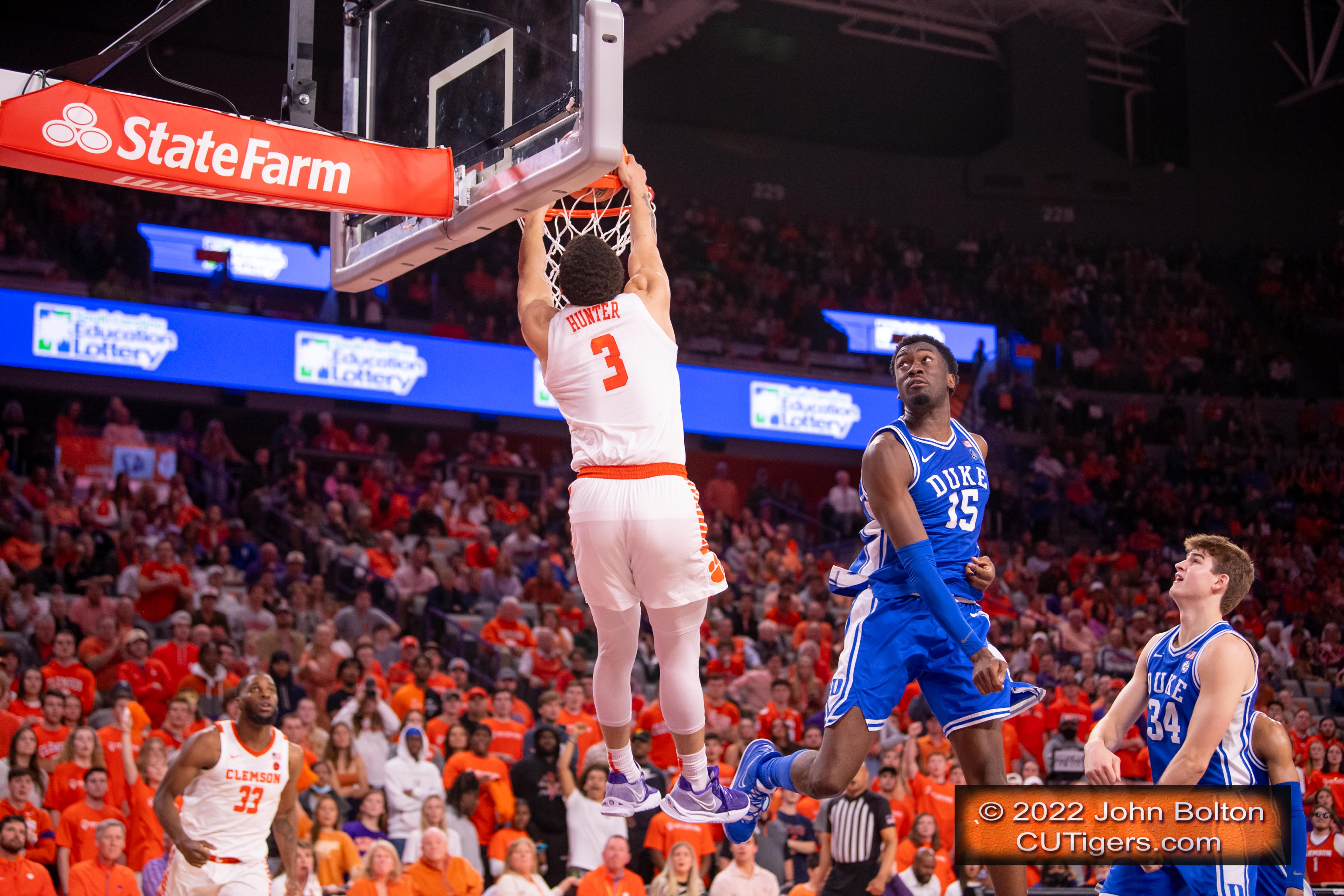 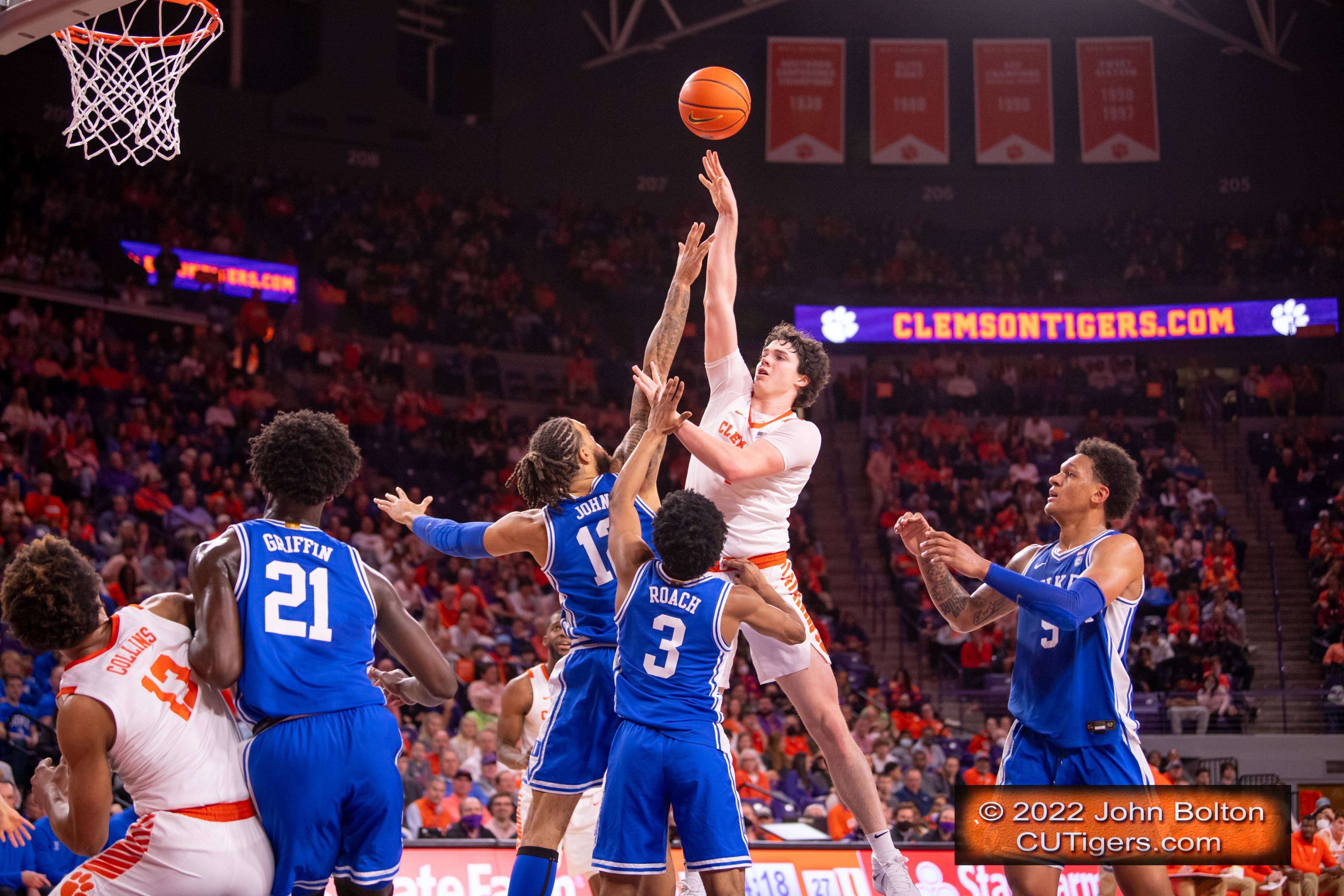 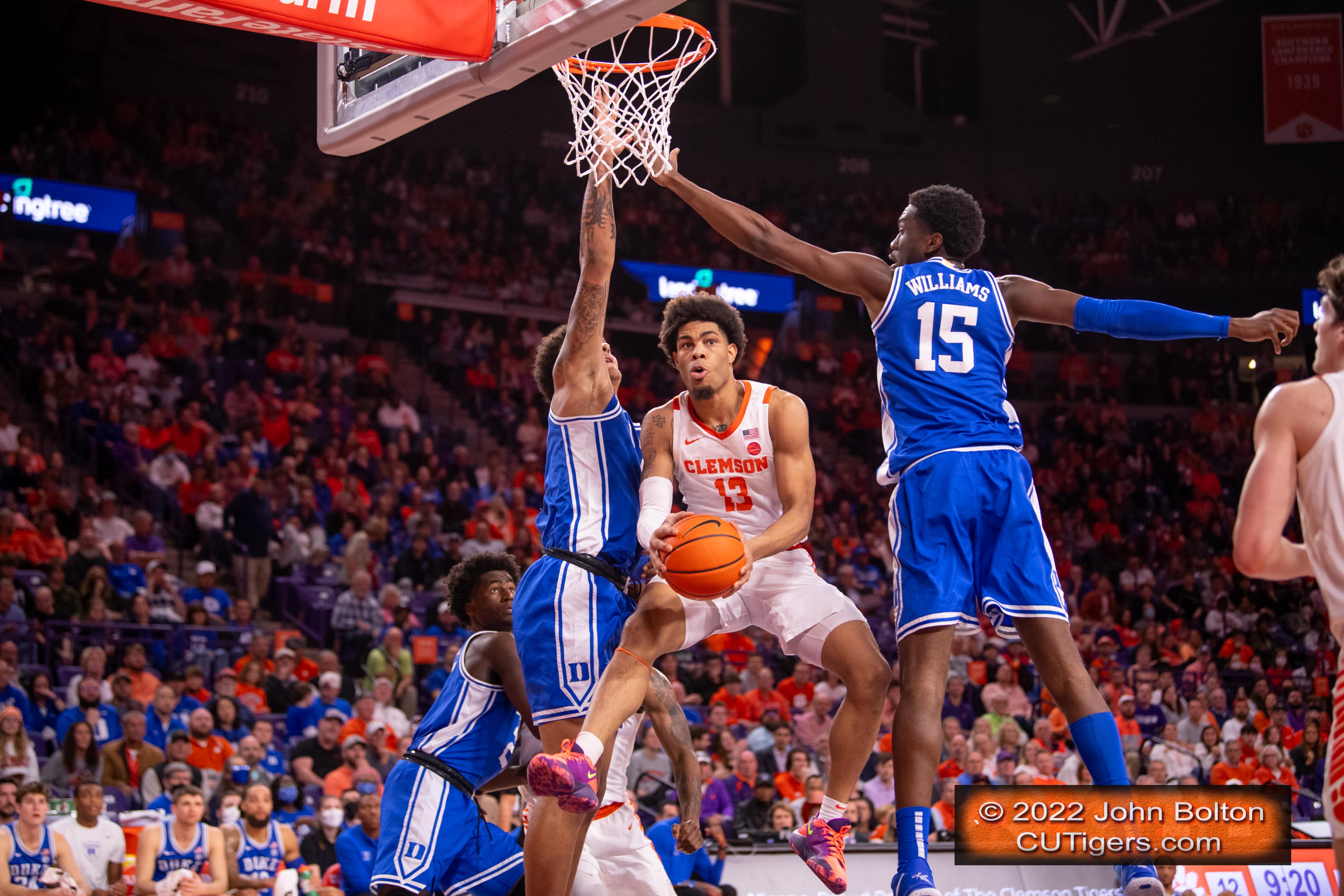 PJ Hall had a much better game than he did at Cameron when he was 6-21 from the field. In fact, the Tigers probably would have won the first meeting if he made shots like he did in the second meeting. He was 6-15 for 17 points, and Coach K was effusive in his praise of Hall after the game. Chase Hunter had one of his better games, going 5-8 from the field for 13 points with 4 rebounds, 2 assists and a steal. True freshman Ian Shieffelin made his first career start for the Tigers after scoring a career-high 12 points against UNC. He fought hard on the glass and collected a career-high 10 rebounds with 5 points and 3 assists. Collins was ejected for a flagrant two foul on a fast break dunk by Wendell Moore with 3 minutes left in the first half. Collins didn't hit Moore hard, but because of his awkward position while hanging on the rim, Moore's fell horizontally to the floor and landed hard on his back. It looked much worse than it was, and Brownell pointed out that the same thing, ironically, happened to Collins against UNC, but he was hit even harder, and only a flagrant one foul was called on that against Brady Manek. Regardless, it was a dangerous situation, and Collins felt terrible after it happened, quickly apologizing to Moore before leaving the game and again on social media from the locker room. Before his exit, Coach K put his arm around Collins and consoled him, saying that he knew Collins meant no harm. Coach K said after the game that he has the utmost respect for Clemson and Brad Brownell as a person and coach. He said that Brownell is "old-school" and "good people." 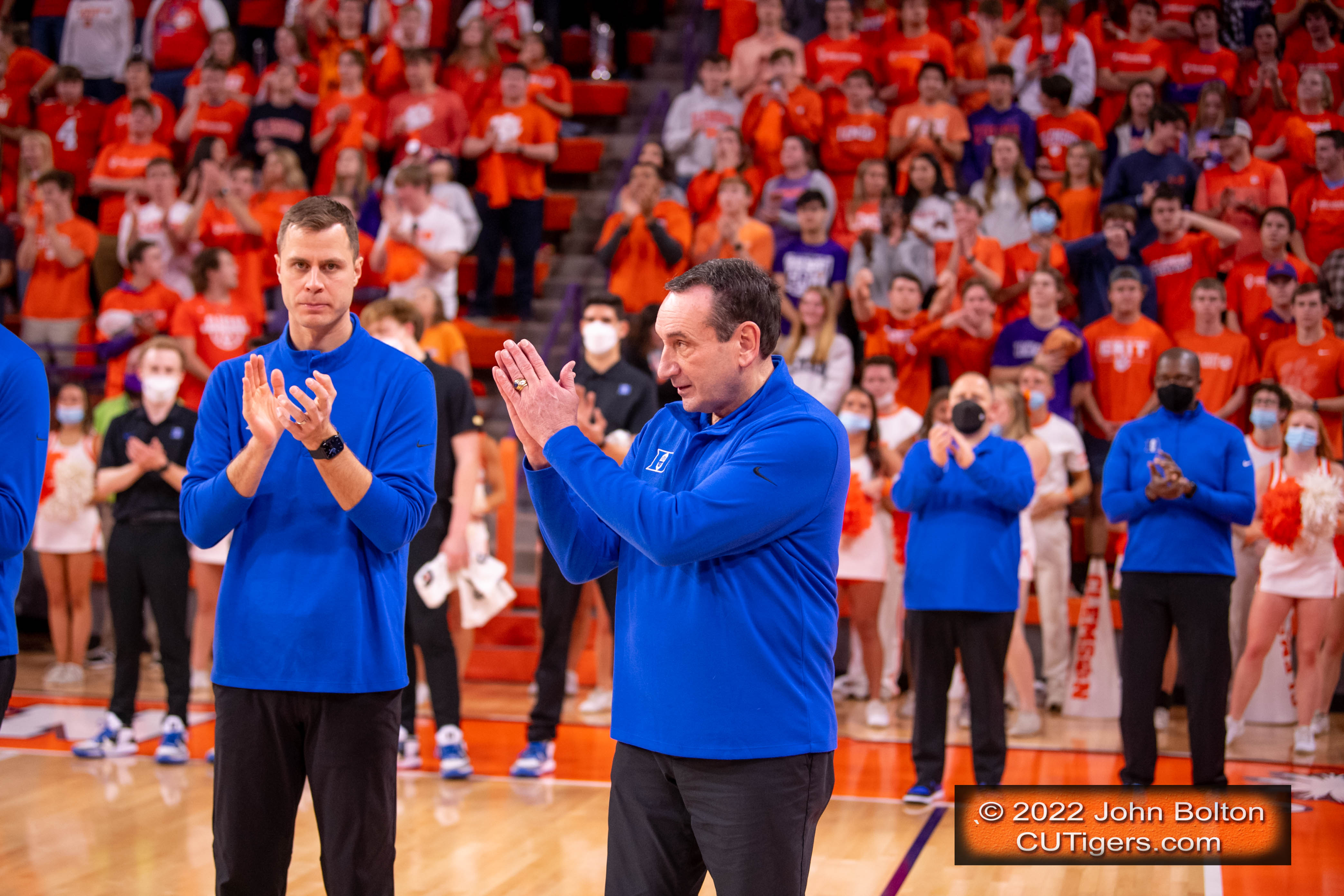 Of course, it was the last game in Littlejohn for Coach K, who will be retiring after this season. The living legend said after the game that he was surprised and very appreciative of the gesture by Clemson before the game, paying tribute to him and making a donation to his philanthropy. The large Littlejohn crowd gave him a standing ovation before the game as well. He was asked after the game about memories in Littlejohn from his 40-year Hall of Fame career, and he said he remembered pregame warmups in 1987 and looking over at Cliff Ellis's Clemson team, thinking, "Those guys look better than us." He said he also remembered some bad losses, and I'm sure the biggest one he remembers is the 74-47 loss his No.4 team suffered in Littlejohn in 2007 at the hands of Trevor Booker and company. Booker was in attendance and honored during the game with his jersey hung in the rafters among the other Clemson greats. It was an electric crowd in Littlejohn with Dabo and Kathleen Swinney in attendance, behind the bench in their usual seats. 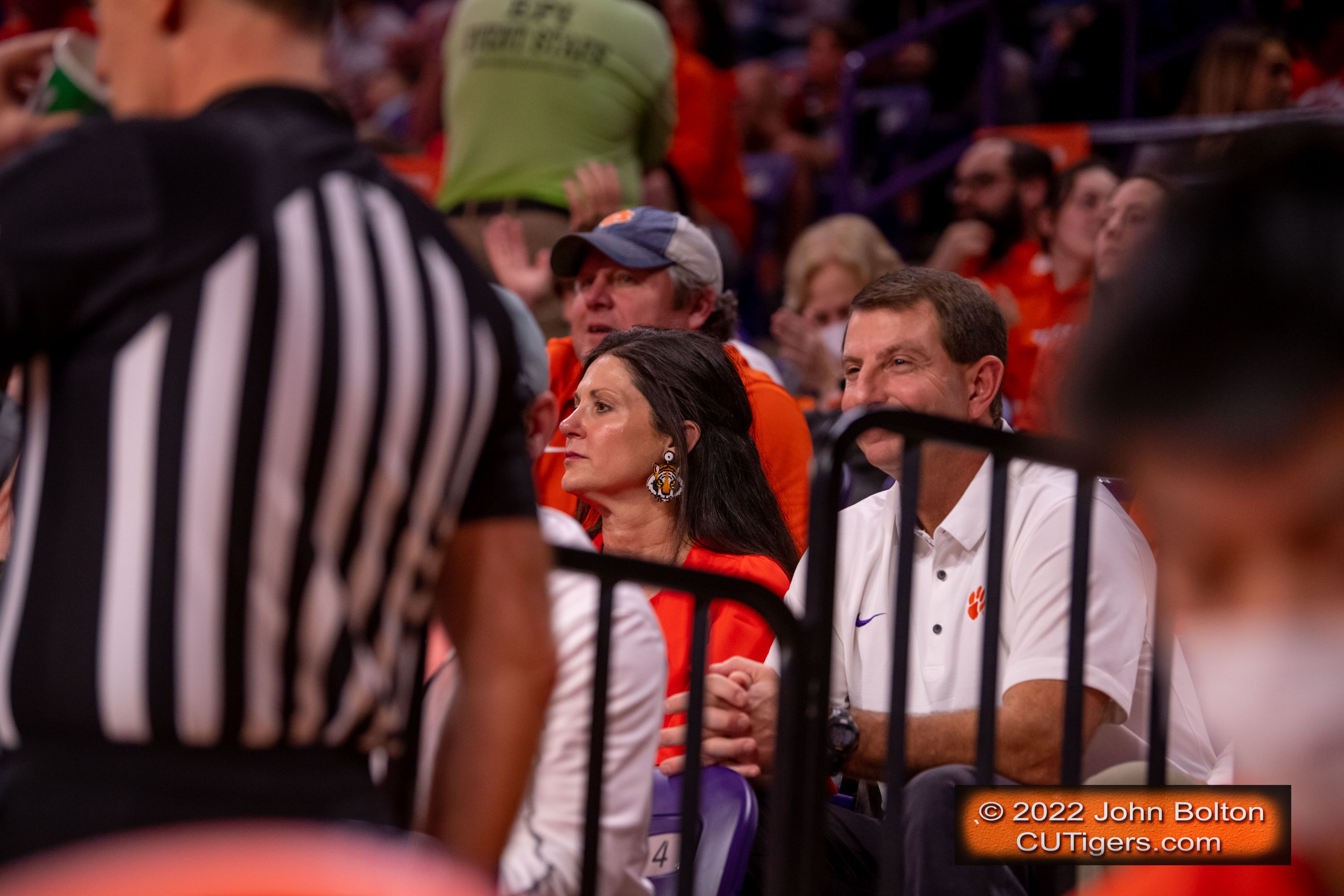 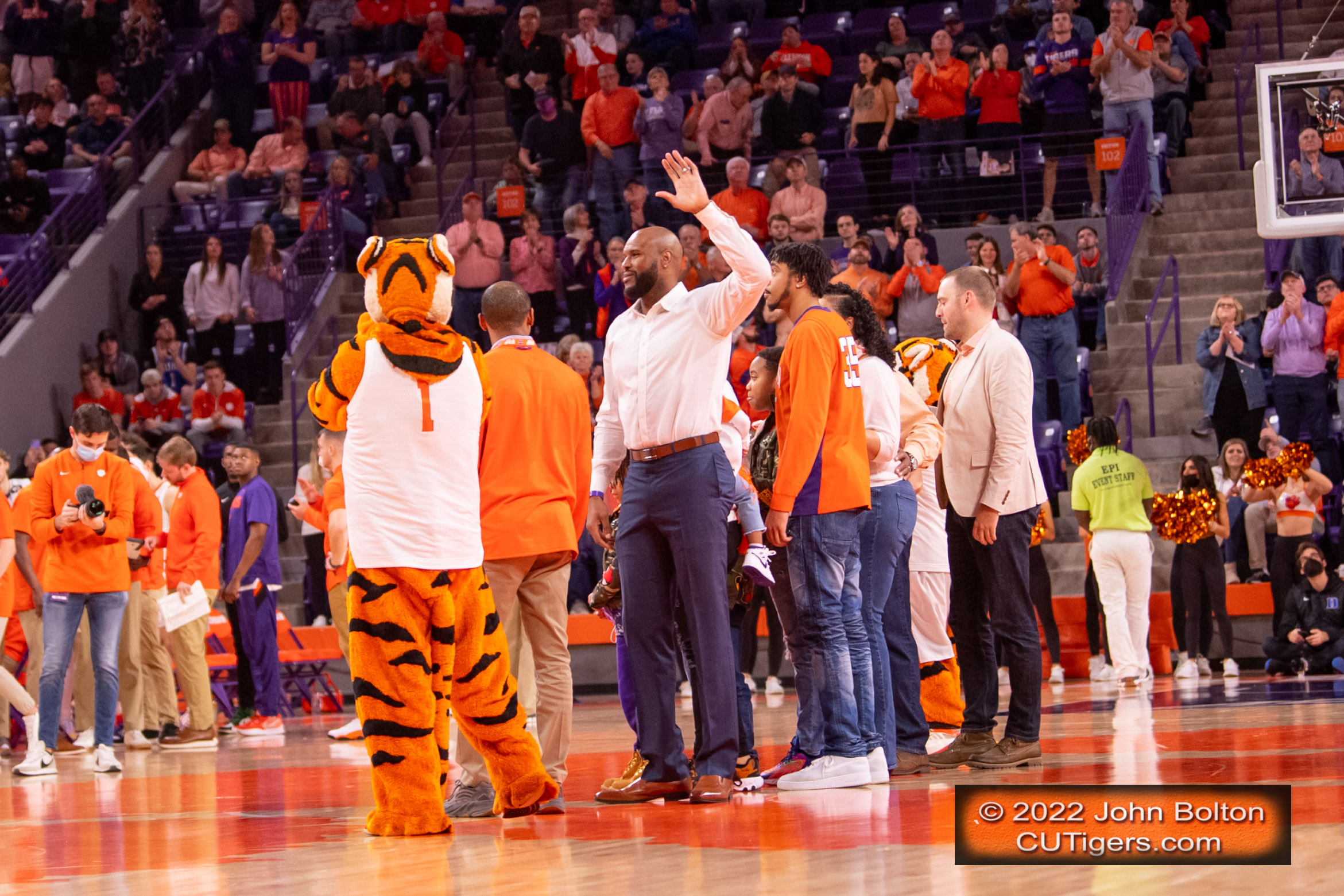 The Tigers fall to 4-9 in ACC play and 12-12 overall. They are 11th in the ACC standings, right where they were picked preseason. Things could easily have been much different, though. They should have beaten Boston College and would have beaten Tech if Hunter Tyson hadn't been injured. Then they came a play away from beating Duke in Cameron and the same for UNC. Not to mention the big leads they lost early in the season. You expect some of that with a young team with several new pieces in a rebuilding year, but it's certainly been frustrating to watch what could have been. As I wrote the other night, it's been a season of what-ifs. The Tigers have another quick turnaround with first-place Notre Dame coming to town on Saturday. The Tigers have to be physically and mentally spent, but if they can somehow pull the upset, maybe they can finish this season on a strong note.
Post-game interviews and highlights are below.