Photo by Trevor Groves
CLEMSON, SC - I have to admit that I didn't give the Tigers much of a chance in this one. When leading scorer PJ Hall went down in the second minute of the Louisville game after scoring on the opening possession, the Tigers fought valiantly on the road and gave themselves a chance to win but ran out of gas in the final couple minutes. The Wake team they were about to face is much better than Louisville, with an 11-6 conference record and just a couple games out of 1st place in the ACC. The Deacs were without starting senior forward Isaiah Mucius due to illness, but they still should have won this game easily on paper. The Tigers would start two true freshman big men, including Ben Middlebrooks, who has played very sparingly all season. And Ian Shieffelin played very little in the first half of the season before Hunter Tyson was injured. With all the odds stacked against them, however, the Tigers came out swinging and never looked back. They led the entire game, never even allowing Wake to tie, although the Deacs cut the lead to 3 points or less several times.
Chase Hunter had the game of his life, going 10-12 from the field for 21 points, both of which were career highs. Nick Honor started at point with Dawes on the bench, but Dawes would be the difference in the second half. After missing his first 5 attempts from the arc and scoring just 2 points, he made three straight 3's and exploded for 17 points in the second half. If you were reading my play-by-play during the game, with about 10 or 12 minutes left, I wrote that Dawes needed to start making some 3's if the Tigers were going to win, and almost immediately after I wrote that, he made 3 in a row. He also made a clutch layup and several free throws down the stretch, scoring 8 of the Tigers' last 10 points.
The Tigers have shown incredible heart and resilience through all the adversity they have faced over the last month. Not only the injuries to their two best players and leaders, but the 4 close losses in a 6-game losing streak. Most teams would have given up on the season and mailed it in by now with little hope and little to play for, but not these Tigers. They played their guts out both at Louisville and again tonight, and it's great to see them finally taste success for their effort. Not only were they minus Hall and Tyson, but another starter, David Collins, was playing with a hurt thumb and thigh. He was wearing a sleeve on his leg for the first time, and you could tell that he was not playing like himself against Wake. He was just 1-5 for 7 points, although he did make a pair of clutch free throws in the last minute. Freshman Ben Middlebrooks did not score and only posted 2 rebounds, but he gave the Tigers a big body in the paint and battled defensively. He also came up with a couple steals. Ian scored 10 points with 5 rebounds, and he looks more and more confident with every start. The one silver lining that is going to come from the injuries this season is that he is going to be that much better next year. He would foul out of the game in the last minute, and for a while it looked like foul trouble would be the Tigers' demise. All 3 of their big men had 4 fouls with over 4 minutes left in the game, but by the time Ian fouled out, it was too late to matter. Nick Honor had a solid game with some timely 3's, going 5-7 from the field for 13 points.
After the game, I asked Brad about Hall's status, and he said that he is just day-to-day. The X-rays on his foot came back negative, so they don't think he can hurt it worse by playing on it. My gut tells me that Hall will play to some extent at Boston College on Saturday because no one is a tougher competitor than that kid, and I think it killed him to be on the bench the last couple games. Also, it looks like we may not have seen the end of Hunter Tyson this season. Brownell said he's started to do some things at practice and is close to being able to play. They could use him for that last home game against VA Tech, although he probably won't play as well as he's capable after being out so long. In the meantime, the Tigers will go to BC on Saturday and seek revenge for the 23-point lead they blew at home against the Eagles back in January.
Post-game interviews and highlights are below! 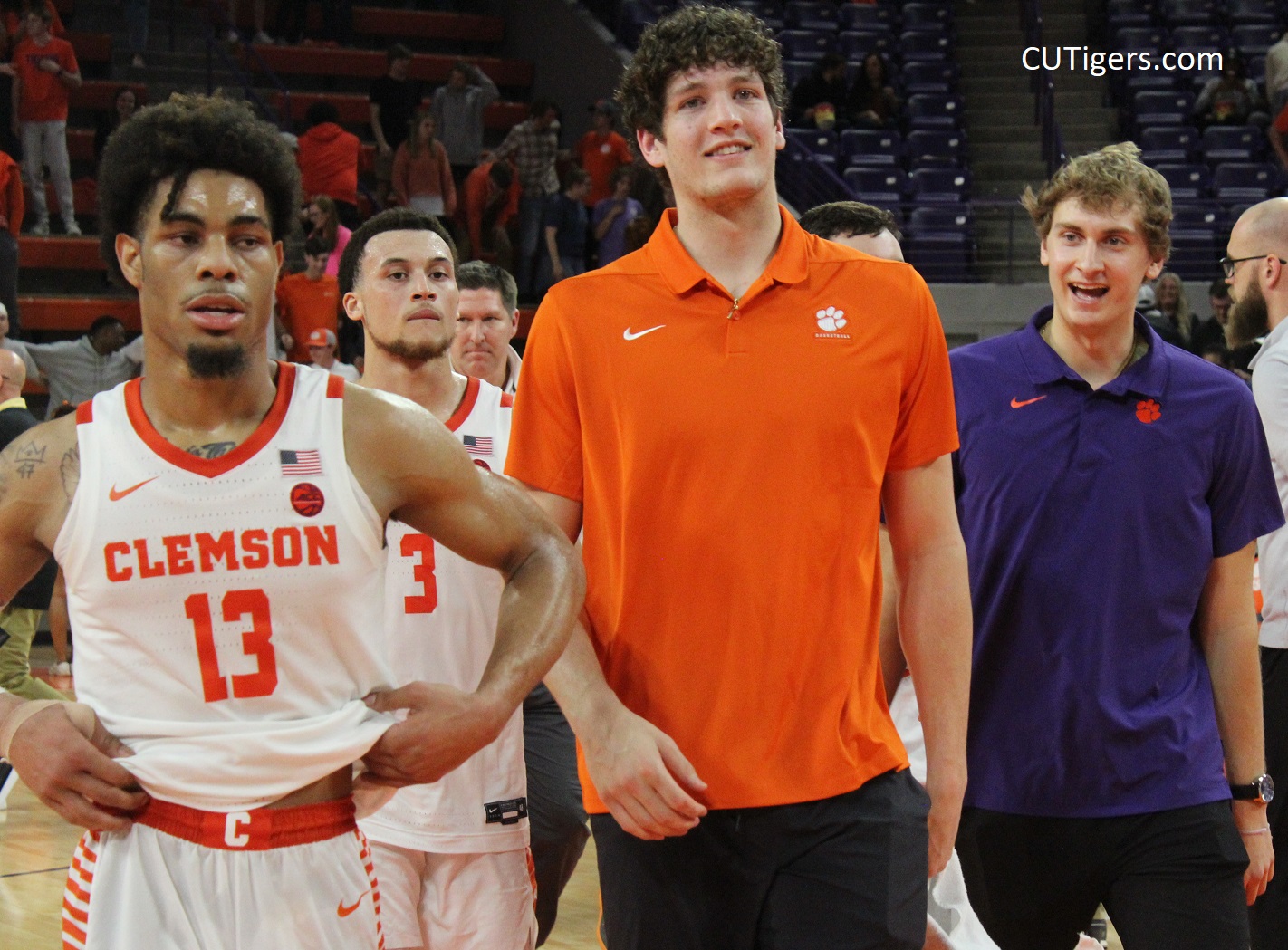