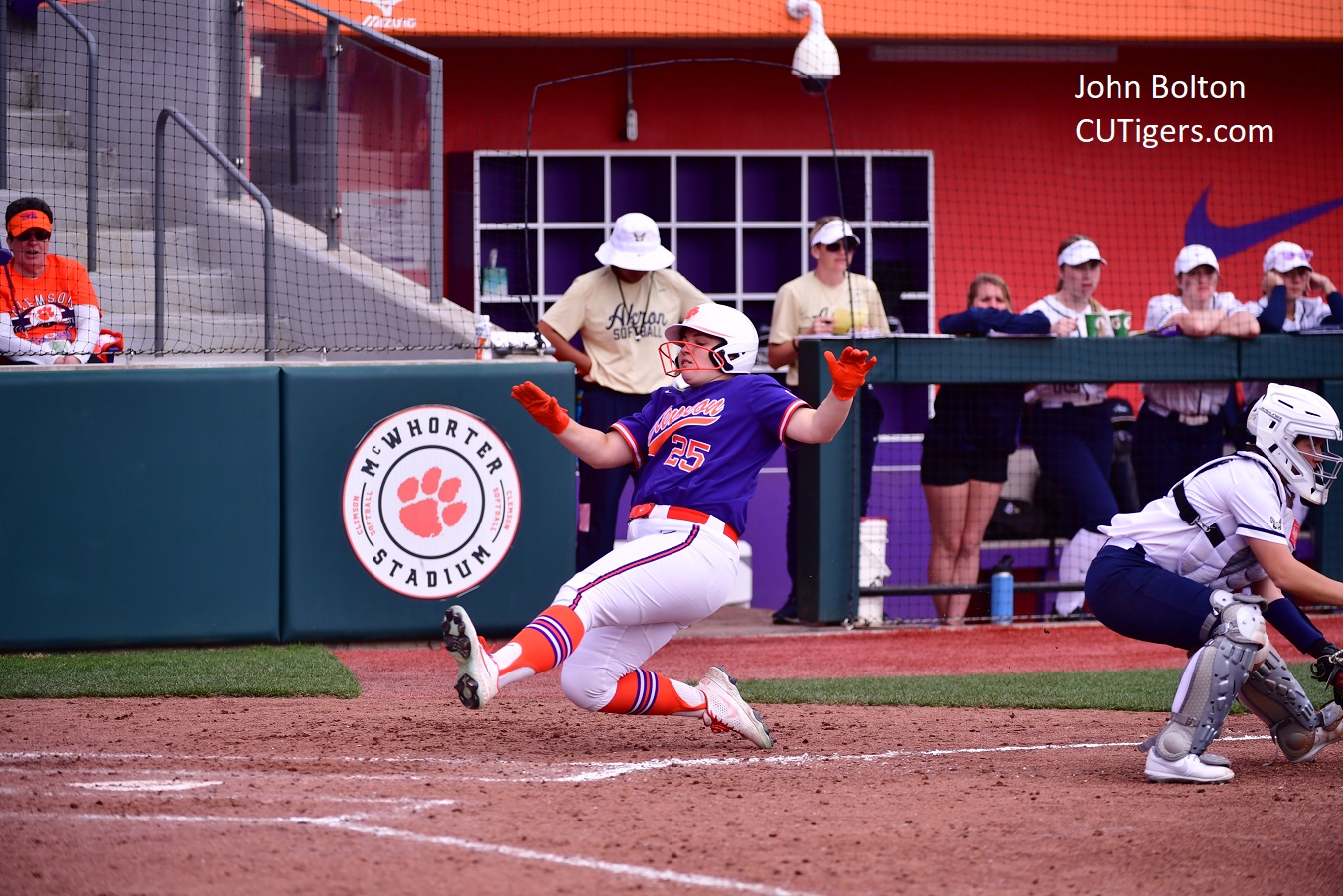 CLEMSON, SC - Saturday started for the Lady Tigers with a 12:30 game against Akron. For the second straight day, Guimbarda got the offense rolling for the Tigers, driving in the first run with a single after Clark singled and Cagle walked. Then with 2 outs, California freshman Aby Vieira hit a 2-out grand slam for her first career homer, giving the Tigers an early 5-0 lead. They would add another in the 2nd inning with an inside-the-park homer by McKenzie Clark.
That would be more than enough runs for McCubbin, who got the start in the circle and pitched 4 scoreless innings. However, John Rittman decided to test his bull pen with the big lead rather than take the easy and probable 5 or 6 inning shutout win with another game later in the day. The decision backfired and looked like it might cost the Tigers the game. It would certainly prevent them from winning a shortened game due to the mercy rule because Gibson started the 5th, and she would give up 2 runs on a single, a walk, an error and a wild pitch. With the score now 6-2, Rittman brought in Whitfield from the pen, and she gave up 3 more runs on a triple and a single to make the score 6-5. The Tigers were looking at potentially another 5-inning shutout win, and all the sudden, they were in a one-run dog fight!
Rittman decided he had tested his bull pen enough and brought in Cagle to pitch the 6th with the one-run lead. She promptly mowed down the Zips 1-2-3 with 2 strike outs. After that, the bats responded with 4 runs to blow the game open again. It started with a leadoff walk by Russ on full count, followed by a single by Clark and a walk by Cagle to load the bases with no outs for Guimbarda, who was red-hot at the plate. She reached on an error by the right fielder and drove in 2 runs to give the Tigers a cushion. Then Pereira would drive in 2 more runs with a single. The Tigers would load the bases again, but the Zips got a force out at home and a fly to end the inning. The 10-5 lead was more than Cagle would need, though, as she went 1-2-3 again in the 7th, throwing just 13 pitches with another strike out.
In the final game of the weekend on Saturday night, the Tigers would get a rematch with Boston, which had only lost to the Tigers in the tournament. For the 3rd time in 4 games, Guimbarda would drive in the Tigers' first run with a single in the 1st, driving in Russ, who hit a leadoff single. In the one game in which Guimbarda didn't drive in the first run, she drove in the second run in the 2-0 win over Saint Francis! She went 6-14 with a HR, 2 doubles and 7 RBI's on the weekend. Guimbarda also drove in the Tigers' next 2 runs with a double in the 3rd after Clark singled and Cagle walked on full count. The Tigers added 3 more in the 3rd with singles by Pereira and Logoleo, followed by a HR by Moore to make it 6-0.
Sophomore Millie Thompson pitched another great game, not allowing a run until the 4th. She allowed a solo HR in the 6th to make it 6-2, and McCubbin would come in from the pen. Cagle drove in a run with a double in the bottom half, and McCubbin gave up 3 two-out hits for a run in the 7th before closing the books on the 7-3 win.
The Tigers have won 20 straight at home! They host Gardner-Webb on Tuesday before a huge home series against No.8 VA Tech next weekend to begin ACC play. Post-game interviews are below!
MORE CLEMSON SOFTBALL, BASEBALL, BASKETBALL AND FOOTBALL COVERAGE HERE