Photo by Trevor Groves
CLEMSON, SC - The 7-0 Tigers were coming off a historic offensive explosion over the weekend, outscoring Hartford 41-6 in their doubleheader on Saturday. The question was whether they could keep that momentum going on Tuesday. After avenging last season’s loss to Monte Lee’s alma mater, College of Charleston, last week, the Tigers would look to do the same against a scrappy USC Upstate team that thumped them 12-2 last season.
The Tigers jumped out to a 4-0 lead in the 1st, making it 9 straight innings they’d scored runs and 12 of 13. After Corbitt singled and Grice drew his 12th walk of the season on full count, red-hot Cooper Ingle singled to put the Tigers on the board. Bryar Hawkins would do the rest of the damage with a 3-run HR, his 3rd homer in 4 games. The Tigers made it 5-0 in the 2nd thanks to a 2-out RBI single by Grice. It looked like the Tigers would run away with it, but Upstate had other ideas.
Freshman Billy Barlow made his second midweek start and cruised through the first 4 innings. However, he was the victim of some bad luck when the leadoff man reached base on a wild third strike. He should have had a K on 3 pitches, but instead Upstate had the leadoff man aboard. Barlow walked the next batter on 4 pitches, and after a grounder moved the runners to 2nd and 3rd with one out, Monte decided to bring freshman Jay Dill in from the pen. If not for that wild third strike, Barlow probably would have finished the inning and picked up his firs career win, but instead it was another no-decision. Dill struck out his first batter but gave up a 2-out single to make it 5-2.
Dill gave up a leadoff single on full count to start the 6th, but he retired the next two batters with a strike out and a fly. Monte decided to bring Gilbert in from the pen even though Dill seemed to be doing fine, and the usually reliable Gilbert would make Monte regret that move. He gave up a bloop double down the 1st base line in shallow right to give Upstate runners at 2nd and 3rd with 2 outs, then proceeded to throw 9 balls in 10 pitches, walking two batters to make it 5-3. Gilbert finally regained his composure and got a strike out to strand the bases loaded.
Lindley came in to pitch a scoreless 7th, and then Edmondson, who has been solid this season, started the 8th. He was all over the place this time. He walked the leadoff man on 4 pitches, struck out the next on 3 pitches, threw a wild pitch and then walked another batter on full count. Then he gave up a double to make it 5-4 and a sac grounder to tie the game. Upstate had scored 5 unanswered runs to tie it in the 8th! Edmondson hit the next batter on an 0-2 count before getting a grounder to finally end the inning. 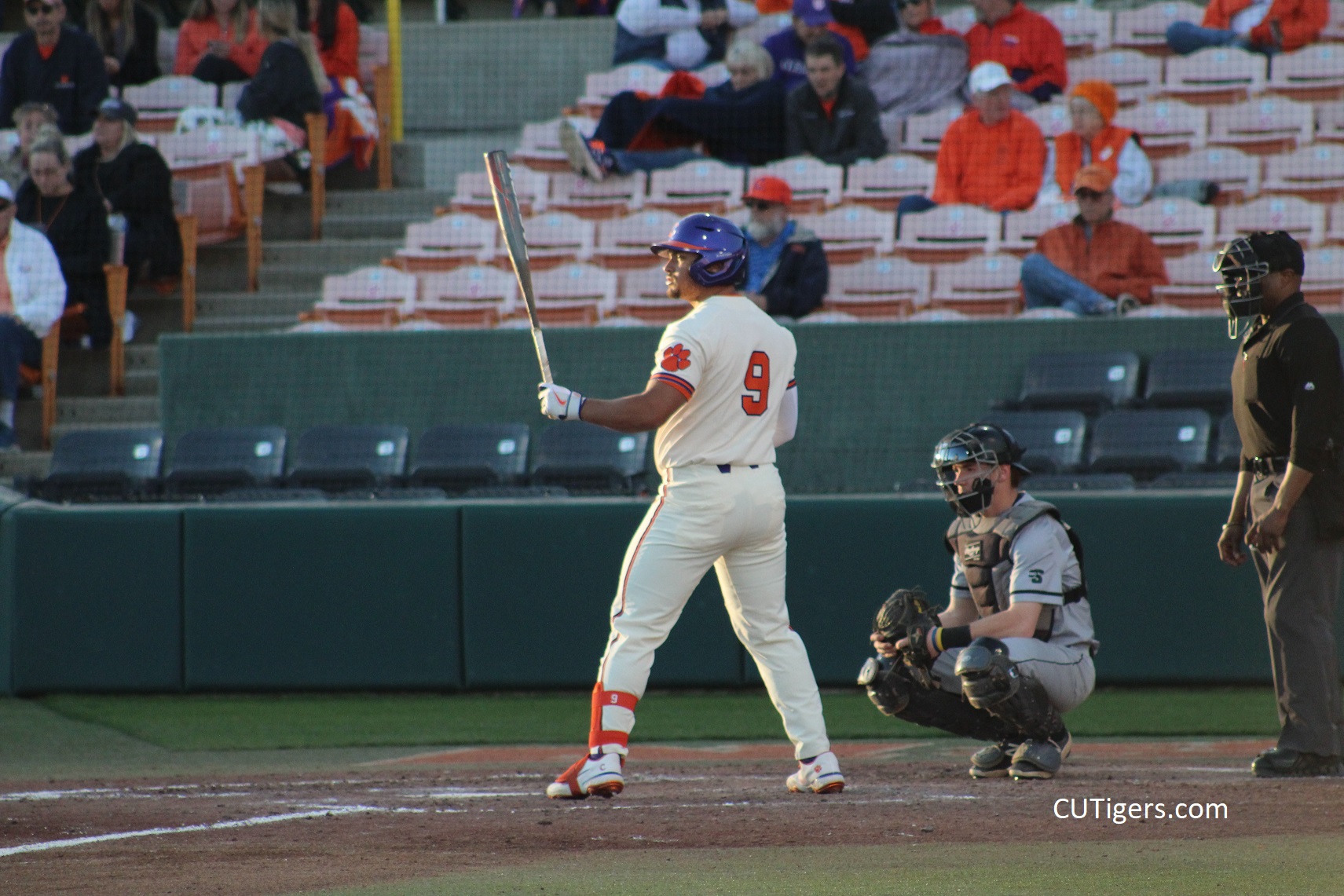 The resilient Tigers immediately responded with a leadoff bomb by DH Jonathan French, who had been splitting time behind the plate with Cooper Ingle. French had crushed a few balls that found their way into opponents’ gloves, but this one left the stadium over the left field grand stands where no one could catch it! He was batting just .214 with 3 hits and one RBI before playing hero on Tuesday, and the homer was his second hit of the game. After a Blackwell single, Dylan Brewer added some much-needed insurance with a full-count HR to make it 8-5. Brewer was mired in a slump through the first 5 games of the season, but he broke out of it on Saturday with 4 hits, doubling his total for the season. Ryan Ammons, who has established himself as the Tigers’ closer, went 1-2-3 in the 9th with a foul out, an infield fly and a strike out in just 12 pitches, picking up his second save of the season.
The game shouldn’t have been as close as it was, but walks and a couple unlucky breaks hurt the Tigers. However, it was good to see them be able to overcome it, especially with French of all players coming up with the game-winning homer. Fairey, Brewer and French have all broken out of slumps in the last few games, and that bodes well for the undefeated Tigers as they get ready to play the Gamecocks this weekend! They will play the first two games in Columbia—one at Founder’s Park and the other at Segra Park—before playing Sunday in Clemson. The Gamecocks lost slugger Wes Clarke from last year’s squad, but they still have Eyster, who has had the Tigers’ number. He had walk-off hits against the Tigers twice last season and has put up tremendous numbers so far this season. I will be at all 3 games to bring you live coverage!
Post-game interviews are below.