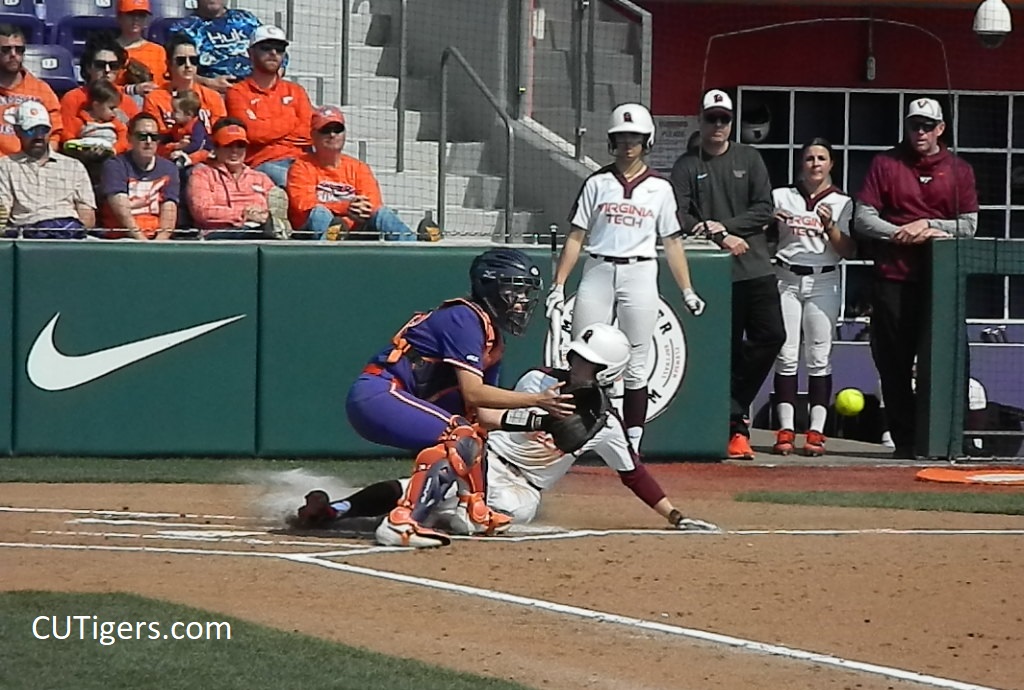 CLEMSON, SC - The Lady Tigers had won swept last weekend's Clemson Classic tournament and had won 6 straight, including an upset of No.5 Washington in Florida. Riding a 21-game home win streak dating back to almost a year ago when they split a 4-game series with No.11 Duke, the Tigers welcomed No.6 VA Tech to McWhorter Stadium for the first top-10 matchup in program history to begin ACC play. The Tigers' home opener last season was against the No.14 Hokies, and the Tigers won 8-1 but dropped the next two games, and it would be the only ACC series loss for the Tigers in their first full season.
For the first 3 innings on Friday night, Valerie Cagle and Kelly Rochard treated the fans to a pitchers' duel that baseball purists would appreciate. However, the average softball fan looking for offense might have been disappointed.
Then came the 4th inning, and the Hokies blew the game open with 6 runs on 8 hits, including a Jayme Bailey grand slam that gave Cagle a rare early exit and made her look human for once.
The Tigers' lone run came in the bottom of the 7th, but it was too little too late. Cagle's record in the circle fell to 5-3 on the season. She did manage to record 4 strikeouts before Regan Spencer took over in the 4th and finished the game, but it was far from what we've come to expect from Cagle.
Even though the Tigers scattered 4 hits and 4 walks in the game, they were just 1 for 6 with runners in scoring position as the Hokies' pitching kept the Tigers off balance most of the night.
The Hokies' pitching continued to have its way with the Tigers' offense on Saturday. Costly errors by the Tigers and timely hitting by the Hokies, along with dominant pitching, propelled the Hokies to a 4-0 series-clinching victory on a sun-splashed Saturday afternoon at McWhorter Stadium.
Virginia Tech managed 4 runs on 11 hits while Emma Lemley kept the Tigers' bats asleep. On the other side of the white lines, the Tigers made 4 costly errors that led to 3 of the 4 runs for the Hokies. It was uncharacteristic for the Tigers' defense, which has been solid this season.
The Tigers had chances, but some questionable officiating in the bottom of the 3rd killed the Tigers' momentum. McKenzie Clark looked to draw a walk that would have loaded the bases with one out in the bottom of the 3rd inning, but a check down call to 3rd base umpire overturned the ball 4 call into strike 2, and Clark struck out on the next pitch.
Kyah Keller did manage to break up the Hokies' no-hitter in the bottom of the 3rd amidst the controversial call. Sam Russ, Alia Logoleo and McKenzie Clark managed the rest of the Tigers' hits.
In addition to losing the series, the other major concern for the Tigers is Aby Vieira, who was injured on a play at the plate after being run into by Jayme Bailey, who didn't slide. Rittman asked for a review, but the umpires determined that there was no malicious intent and thus no ejection. At the end of the game, Vieira was seen on crutches, and the extent of her injury is unknown. We should have an update for you on Sunday.
The Tigers look to bounce in game 3 at noon on Sunday and hopefully avoid the sweep at home. Click the link below for live updates!
MORE CLEMSON SOFTBALL, BASEBALL, BASKETBALL AND FOOTBALL COVERAGE HERE