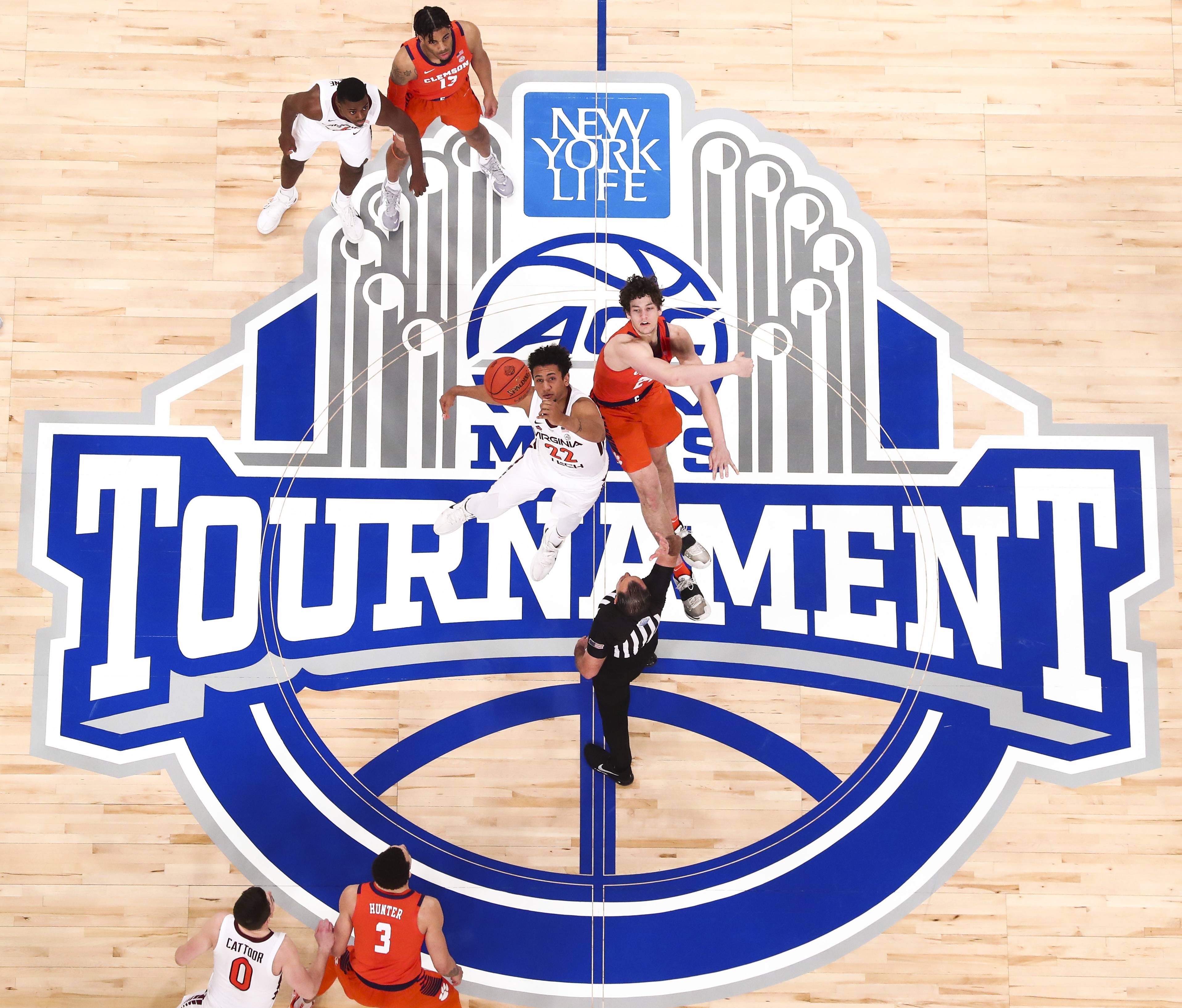 BROOKLYN, NY - What a game! The No.10 seed Tigers had a huge challenge before them in facing No.7 seed VA Tech, a team the Tigers had just beaten 63-59 on Saturday in a game that went down to the wire. It's tough enough to sweep a good team twice in a season, let alone in less than a week and on short rest! However, the Tigers came in riding a 5-game win streak and were ready for a fight. After a back-and-forth first half, the Hokies stretched their lead to 11 at halftime. They led almost the entire second half and by as many as 14, but the Tigers kept fighting. They rallied to take their first lead of the second half with a 3-pointer by Honor with 1:13 left, capping a 14-2 run by the Tigers over 4 minutes. The two teams would trade blows like a couple of heavyweights over the last minute of regulation. Storm Murphy hit a 3-pointer, his first of the second half and fifth of the game, to put the Hokies up 2 with 19 seconds left. He made four 3's in a row at the end of the first half to put the Hokies up by double digits. However, PJ Hall has poise beyond his years and swished a contested jump-hook with 7 seconds left to tie the game and send it to overtime!
The Tigers could have sealed the win in overtime when they had a 2-point lead with 30 seconds left, but Dawes missed one of his free throws, and then Hall missed one of his with 6 seconds left. So instead of a 4-point lead, the Tigers led by 2, and Darius Maddox hit a 3 at the buzzer for the 76-75 win. It's not the first heartbreaker the Tigers have lost to the Hokies in overtime or at the end of regulation over the years, but it might have been the worst.
Each of the Tigers' starters scored double digits with the exception of Honor, who scored 7. Hall led the way with 16 points and was 5-11 from the field. Hunter was 2-3 from the arc and Hall was 2-4, but the rest of the team was just 4-16 (25%). David Collins fouled out with 2 minutes left in regulation, and that might have cost the Tigers in overtime, but they could have sealed the game with a couple of makes a the free throw line in overtime. They were 11-16 from the stripe.
In my opinion, the Tigers will likely receive an NIT bid because of the way they finished the season. This will go down as a season of what could have been because I believe they would have made the NCAA Tournament for a second straight year if their two best players and leaders--Tyson and Hall--hadn't suffered injuries. The team fought admirably without them and still almost beat UNC at home and FSU, Louisville and GT on the road without them. Before they went down, the Tigers were playing great basketball and nearly beat Duke in Cameron. And the Tigers' 5-game win streak (nearly 6) to end the season is an indication that this team is much better than their record when fully healthy. If they do get the NIT invite, I wouldn't be surprised if the Tigers win the whole thing for the first time in program history!
Post-game interviews and highlights are below.
MORE CLEMSON FOOTBALL, BASKETBALL, BASEBALL AND SOFTBALL COVERAGE HERE