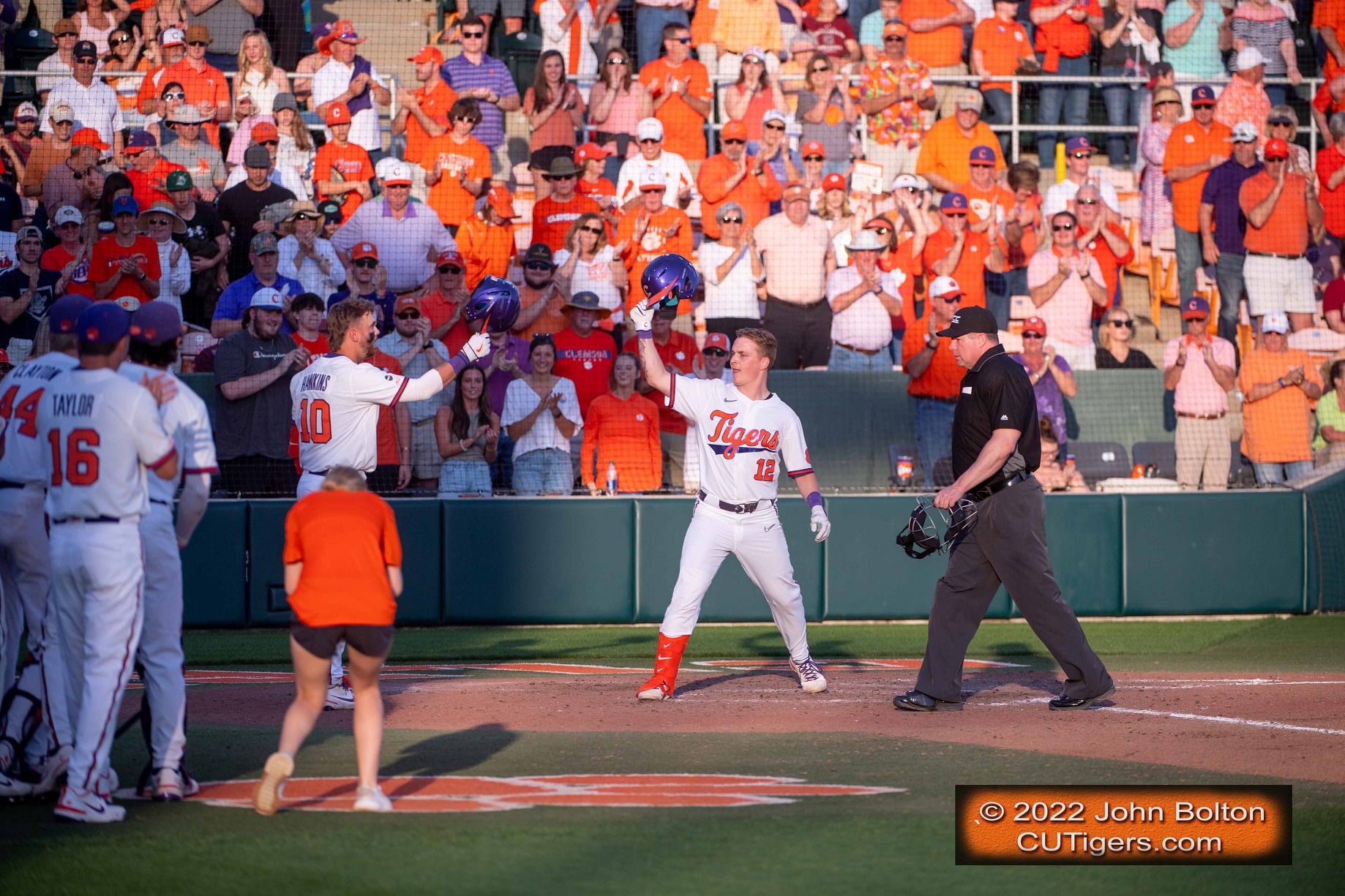 CLEMSON, SC - After a beautiful first weekend of March in the 70's, the Northeastern Huskies brought the cold weather with them from Boston because it was a freezing, windy Saturday in Tiger Town. However, that didn't cool down Cooper Ingle's bat. He went 3-5 at the plate, coming just a triple short of the first-ever cycle for the Tigers, and the team exceeded its 9-run-per-game average.
Monte stuck with the weekend rotation he used against the Gamecocks, and Nick Hoffmann got his second straight Saturday start on the mound after starting the first two Sundays. He gave up 4 runs on 7 hits but would be the first Clemson starter to go 7 innings in a game this season.
The Huskies struck first with a 2-out single to take a 1-0 lead in the 2nd. However, the Tigers immediately answered as they did on Friday, taking a 2-1 lead in the bottom half. Fairey drove in the first run on a one-out single, and Monte called for a squeeze play, with French sac bunting in the second run. Monte continues to show his willingness to play small ball in certain situations this season, something he has almost never done in the past, and it continues to pay dividends.
The Tigers added to their lead in the 3rd with an Ingle single that scored Brewer from second, extending Ingle's hit streak to all 14 games this season. The Huskies made it 3-2 with a double in the 4th, but the Tigers again responded with a run in the bottom half thanks to a 2-out single by Corbitt to make the score 4-2. The Tigers broke the game open in the 5th starting with a leadoff HR by Ingle, his second in a week and of his career. After Wagner doubled, French hit a 2-out RBI single and Brewer doubled for another run to give the Tigers a 7-2 lead. Hoffmann issued a leadoff walk and a HR to start the 6th but would finish the inning with a 7-4 lead.
Once again, the Tigers answered the Huskies' score in the bottom half with a 2-out, bases-loaded single by French to score 2 and put the Tigers ahead 9-4. Ingle started the rally with a double and would have a chance for the first-ever Clemson cycle in his final at bat, but he was unable to come up with the elusive triple. The Tigers added their final run in the 7th with a solo HR by Grice, his 4th of the season. Hopefully, that will break him out of his slump because he was 0-4 with 2 strike outs in the game before that and just 4-29 with 14 K's over the last 7 games.
Freshman Billy Barlow pitched a perfect 8th, and fellow freshman Ricky Williams gave up a couple singles and a walk in the 9th but benefitted from a double play for a scoreless inning to close the game. Barlow has been the Tigers' midweek starter for the first 3 weeks and pitched a great game against Michigan State on Wednesday, so it's curious that Monte would bring him in to pitch an inning of relief with a big lead. I'll have to ask Monte if they are going to start someone other than Barlow on Tuesday.
The Tigers were an impressive 9-24 (.375) with runners in scoring position after going 4-9 with RISP on Friday. Ingle is now batting .453 on the season. French also had a great game, going 2-4 with 4 RBI's and 2 runs scored.
The Tigers are now 14-0, which is the best start since the 1992 team opened the season 17-0. They'll go for the sweep on Sunday at noon, and I'll have live coverage at the link below!
MORE CLEMSON BASEBALL, BASKETBALL, SOFTBALL AND FOOTBALL COVERAGE HERE