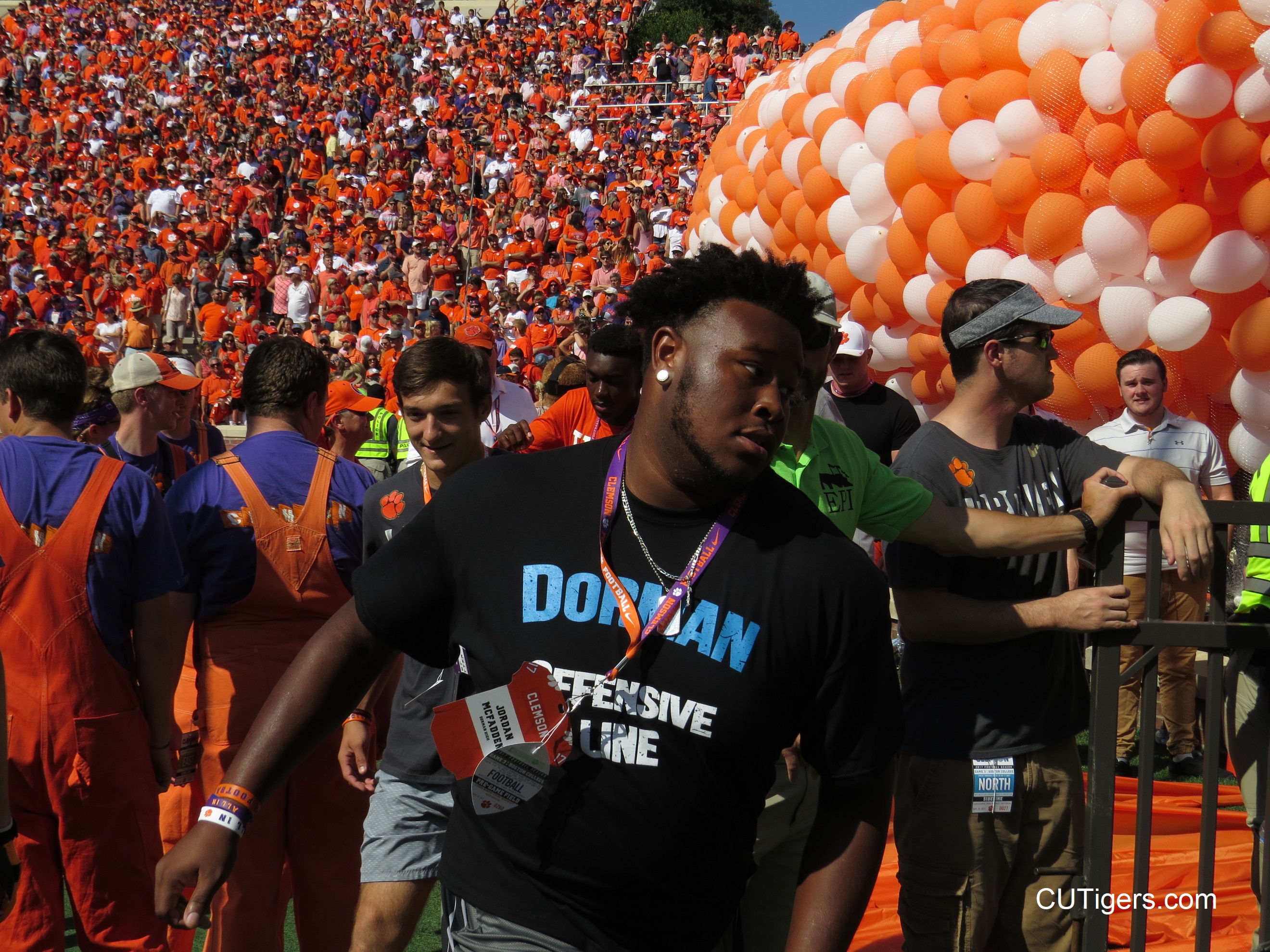 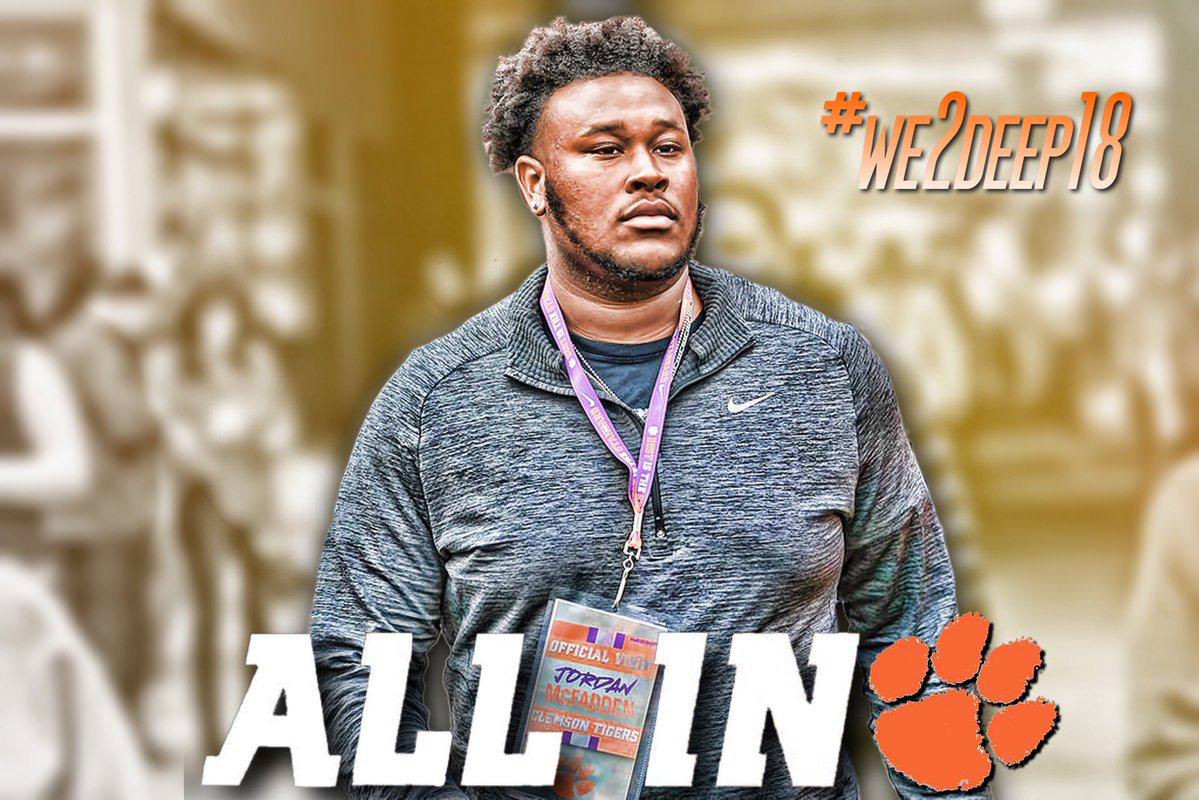 Clemson picked up a commitment from Dorman High School star Jordan McFadden from Roebuck, the top offensive lineman in South Carolina, and prior to today, a Virginia Tech commit. Things started trending Clemson Orange back when the Tigers offered him mid-season, and since then it’s been more of a "when" rather than "if" McFadden would flip to the Tigers.

McFadden will remind a lot of Clemson fans of Brandon Thomas—one of a few Dorman-Clemson-NFL players over the years. He’s very athletic and has superb footwork for a big man. McFadden is destined to play tackle at Clemson.

Stay tuned for more on the McFadden commitment as we update you on the latest in Clemson recruiting! 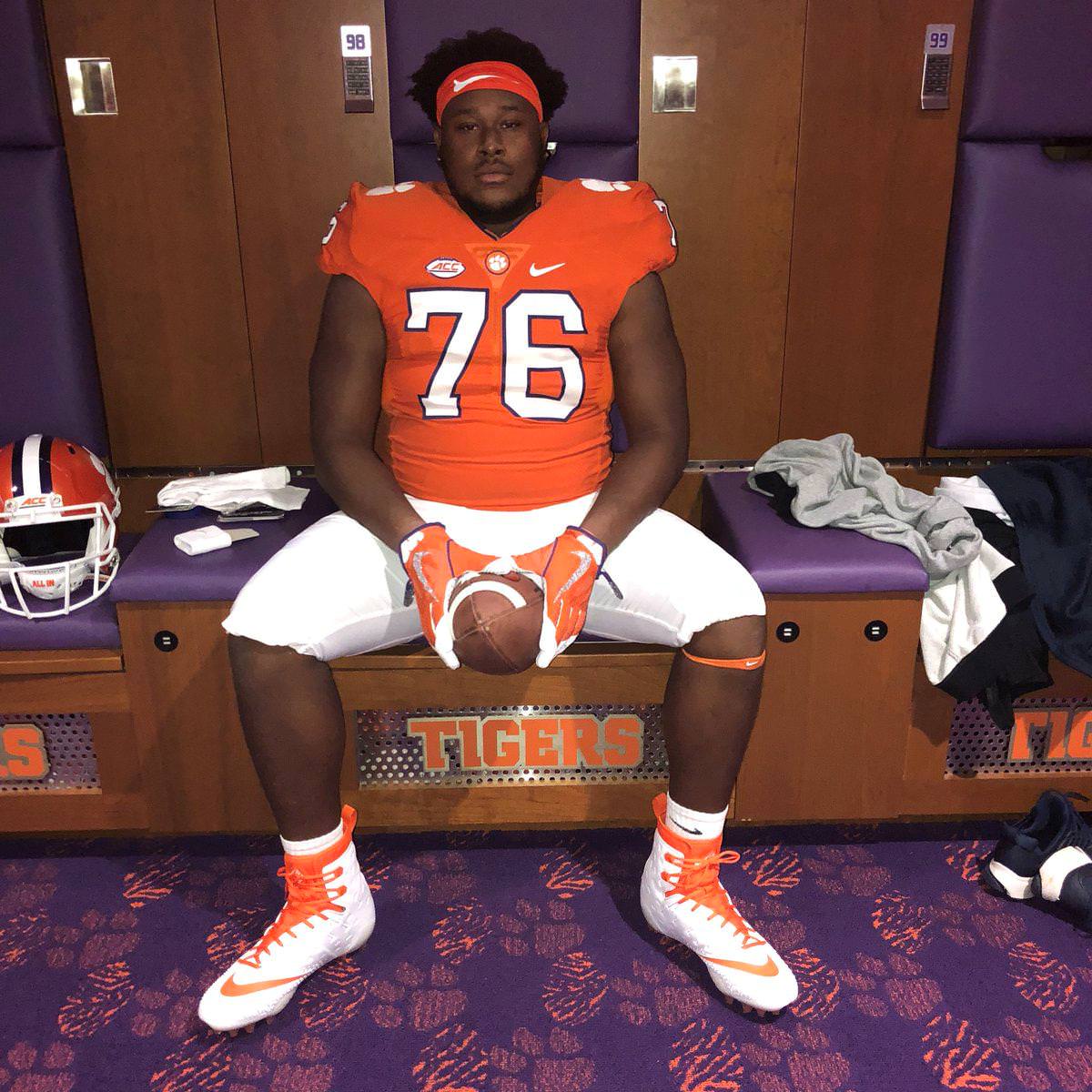 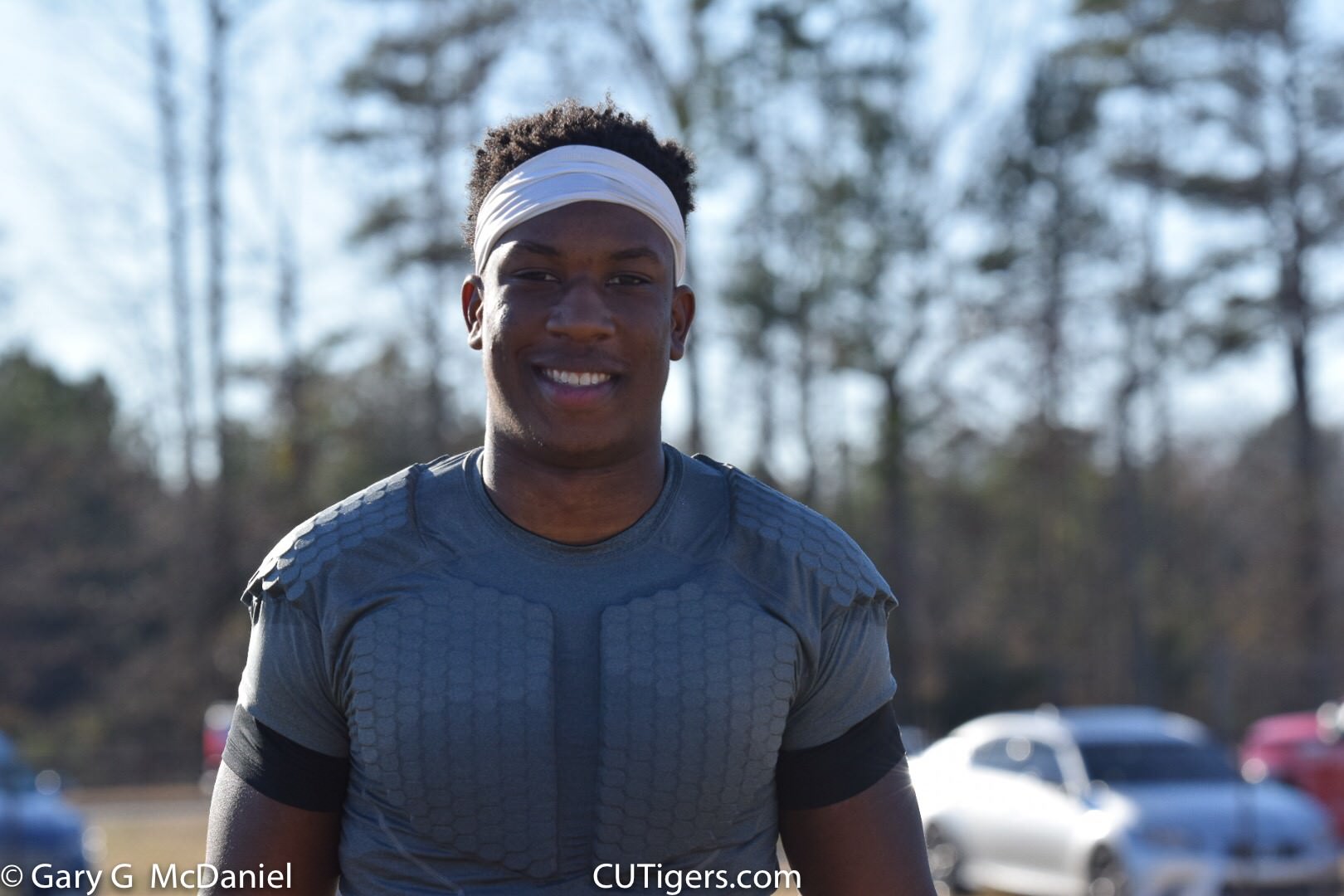 One school is going to receive an early Christmas present from Santa: one of five finalists for the Tar Heel State’s top prospect in 2018. K.J. Henry is set to announce on the 20th of December from a list that includes Clemson, Alabama, Georgia, Virginia Tech and South Carolina. We expect him to sign next week on the 20th, the first-ever early signing period, so this will be similar to a National Signing Day announcement.

Henry has been on Clemson’s radar since a performance at the Dabo Swinney camp back in June of 2015. As far as an up-to-date pecking order, we believe from sources around Henry that it's the Tigers and Hokies in that order from what we are hearing with regard to the top defensive target on the Tigers’ board for this 2018 class. The other 3 are all on the outside looking in.

We plan to be on site for his commitment at Henry’s high school in Charlotte and will stream it for you LIVE here on CUTigers.com!

So stay tuned as we continue to track the 5-star from Charlotte with the commitment to his college of choice quickly approaching. 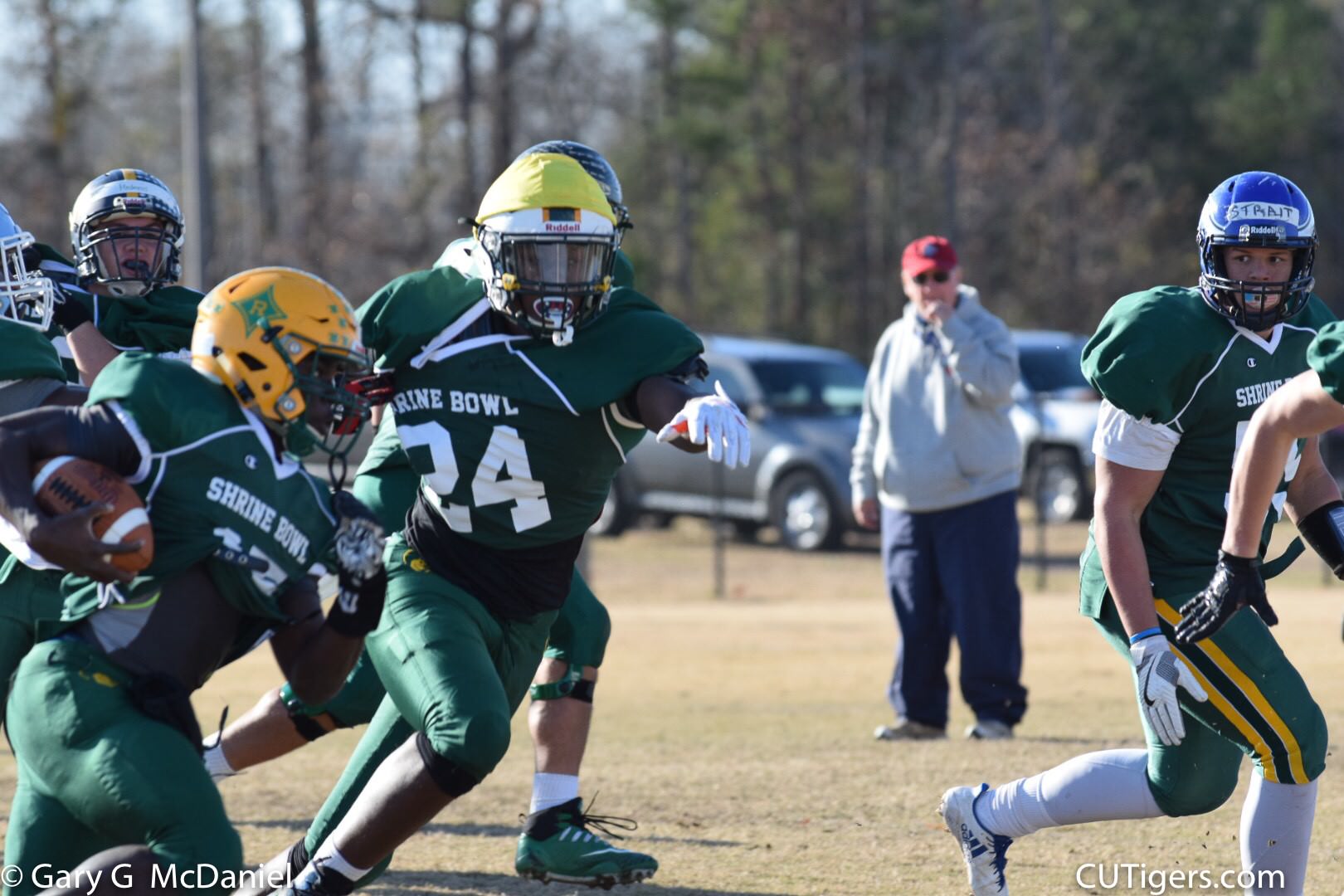 ****Clemson Commit Receives In Home Visit at the Beach 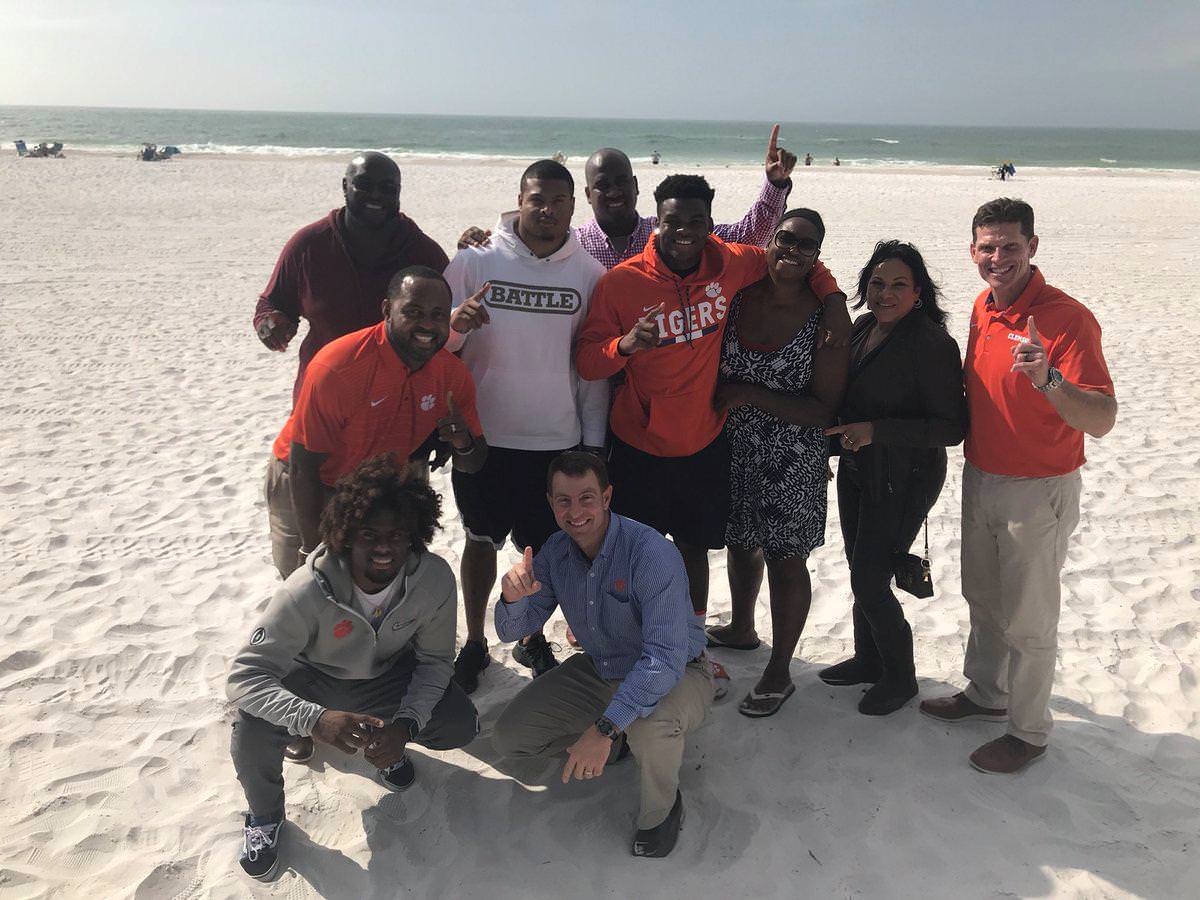 Mike Jones, Jr. of IMG Academy in Bradenton, FL, a 2018 Clemson commit, tweeted today as the coaches stopped by to see him for his in-home visit. They decided to take to the beach, and in rare fashion, the in-home was conducted on the sand and surf of sunny Florida.

Ironically, the upstate of South Carolina was hit with a rare winter storm at the time, so Dabo and the coaches were able to benefit from the rigors of recruiting this time. Note that fellow Clemson commit Xavier Thomas is also in the above photo, as well as a potential Clemson flip! Newly minted 5-star DB Brendan “Bookie” Radley-Hiles (grey sweatshirt) is a Nebraska commit, but we believe he is presently trending to Clemson. Keep your eyes peeled here at CUTigers.com as we track his recruitment! 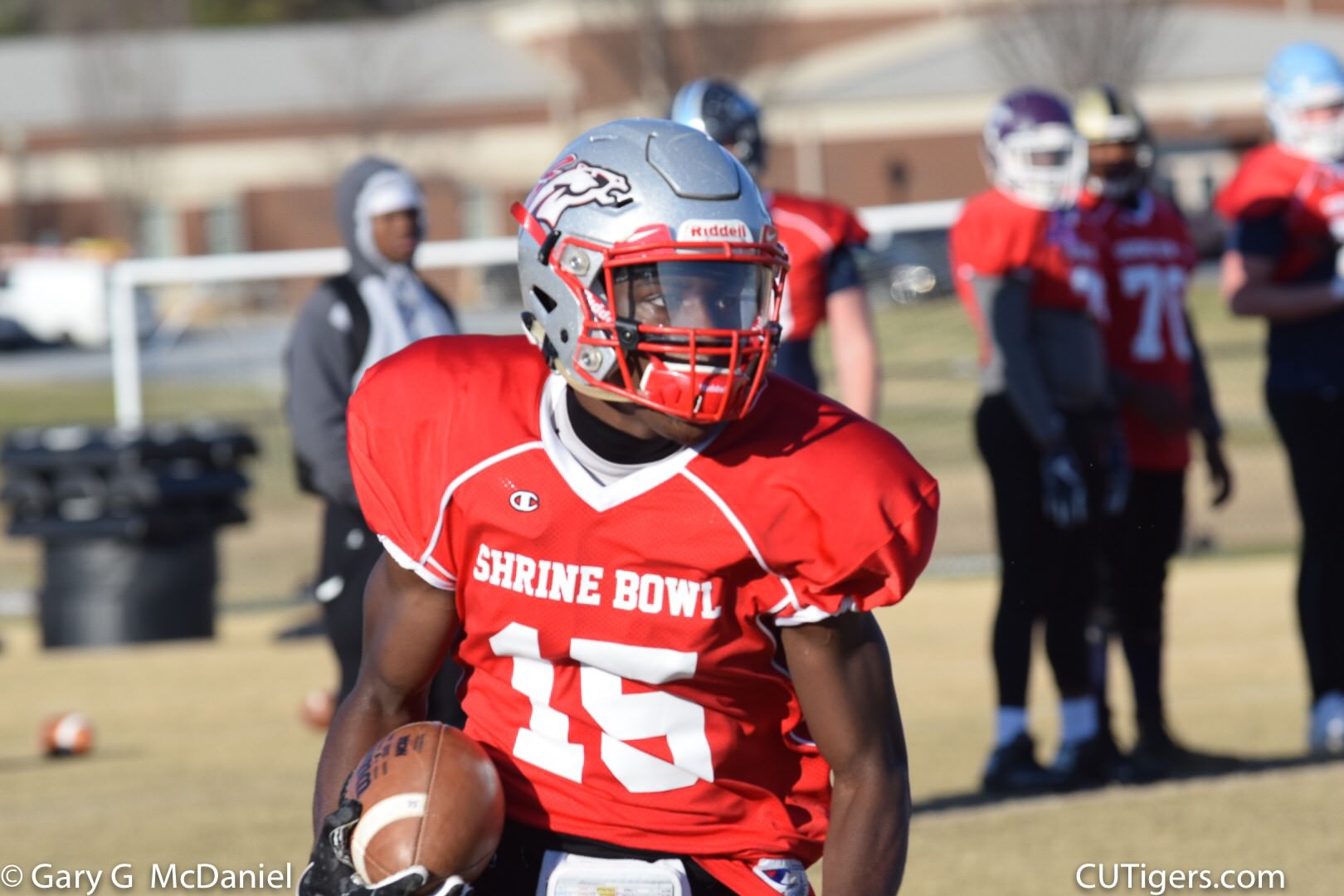 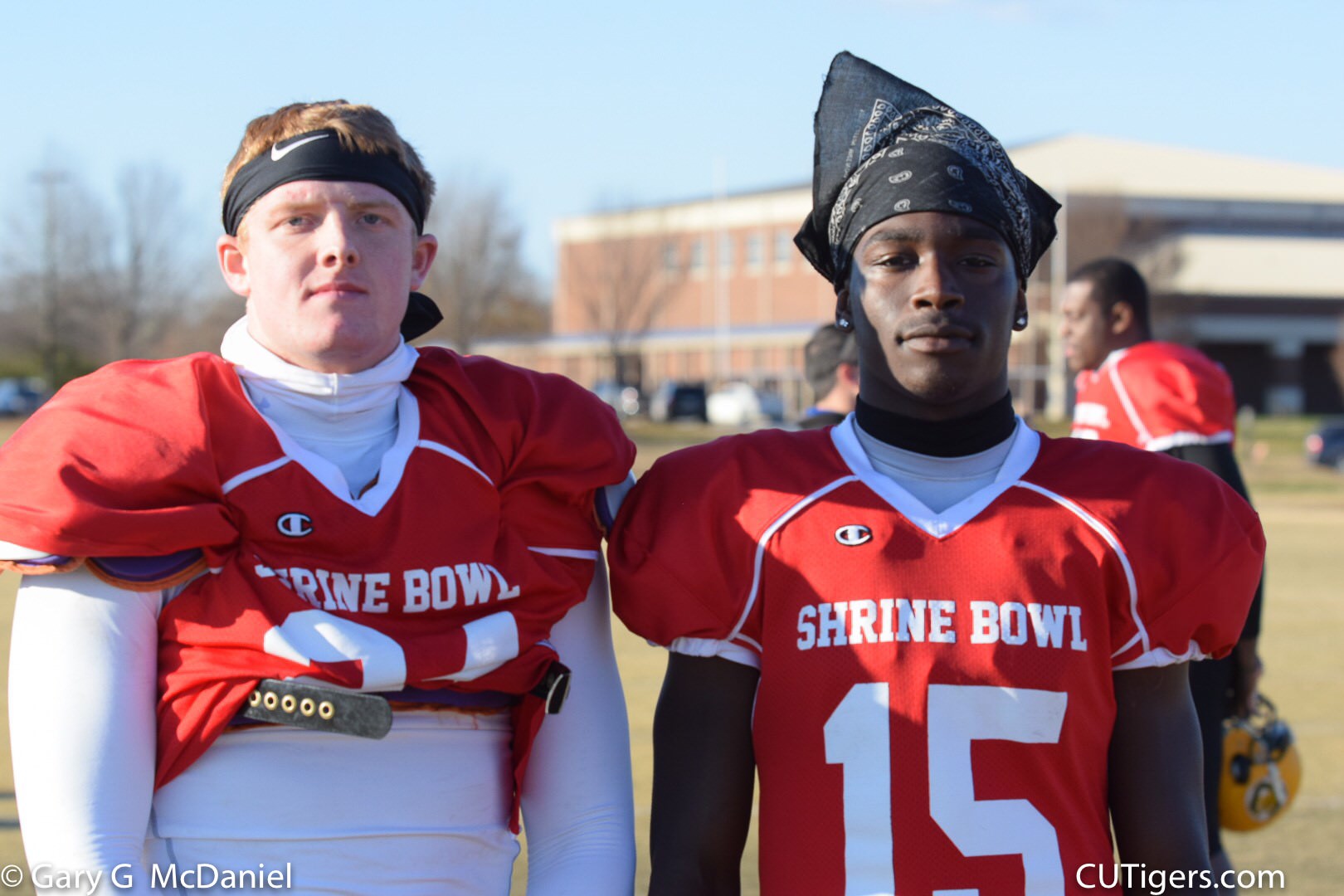 2017 Shrine Bowl practices have been taking place this week in nearby Spartanburg, SC on the campus of Dorman High School, and CUTigers has been on hand for the sessions as the teams worked out and game-planned for Saturday's annual Shrine Bowl of the Carolinas.

Clemson commits Jake Venables (LB) and Derion Kenderick (WR) are on the South Carolina squad, and the Tar Heel team has high-valued Clemson DE target K.J. Henry on its roster.

We will be in the press box and down on the field on Saturday for the big game and will have a photo gallery, video clips and much more to share including interviews with the Clemson recruits. Kickoff is 2:00 on Saturday at Wofford College.

So stay tuned right here for our Shrine Bowl wrap-up, including a full gallery of this week’s practices! 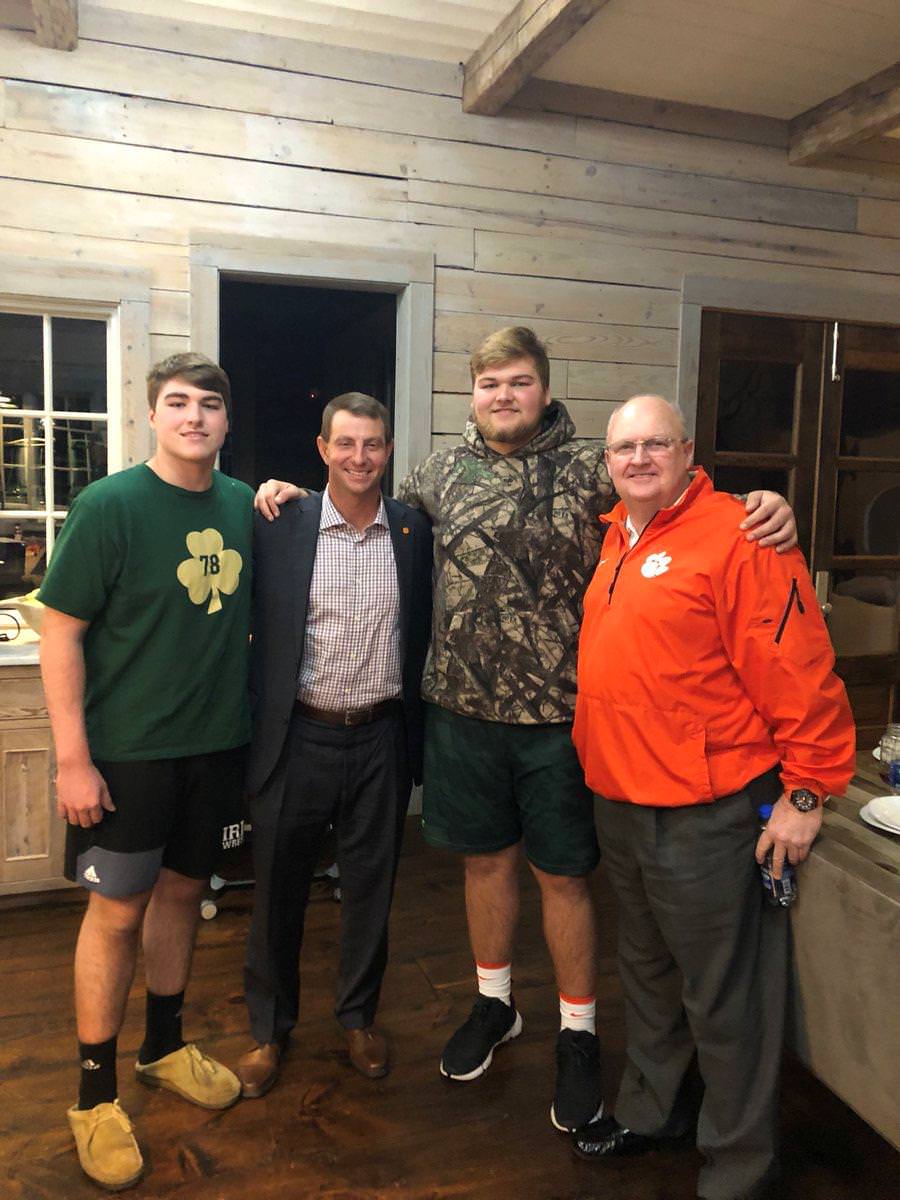 Clemson Head Coach Dabo Swinney and Coach Robbie Caldwell made the trip into the Volunteer State last night and had their in-home visit with Knoxville Catholic 5-star OT Cade Mays, who visited Tiger Town in November for The Citadel game on his official visit. The former Tennessee commit is down to Clemson and Georgia, with an official visit to Athens unfolding this weekend.

As of today, we see it 55-45 with a slight Clemson edge. However, Georgia have the luxury of the last official visit, and that is going to be a heck of a situation for the Tigers to overcome. Mays is set to announce on the 20th of December—the early signing period and the same day as K.J. Henry. So stay tuned right here as we plan to track Cade all the way up to announcement! 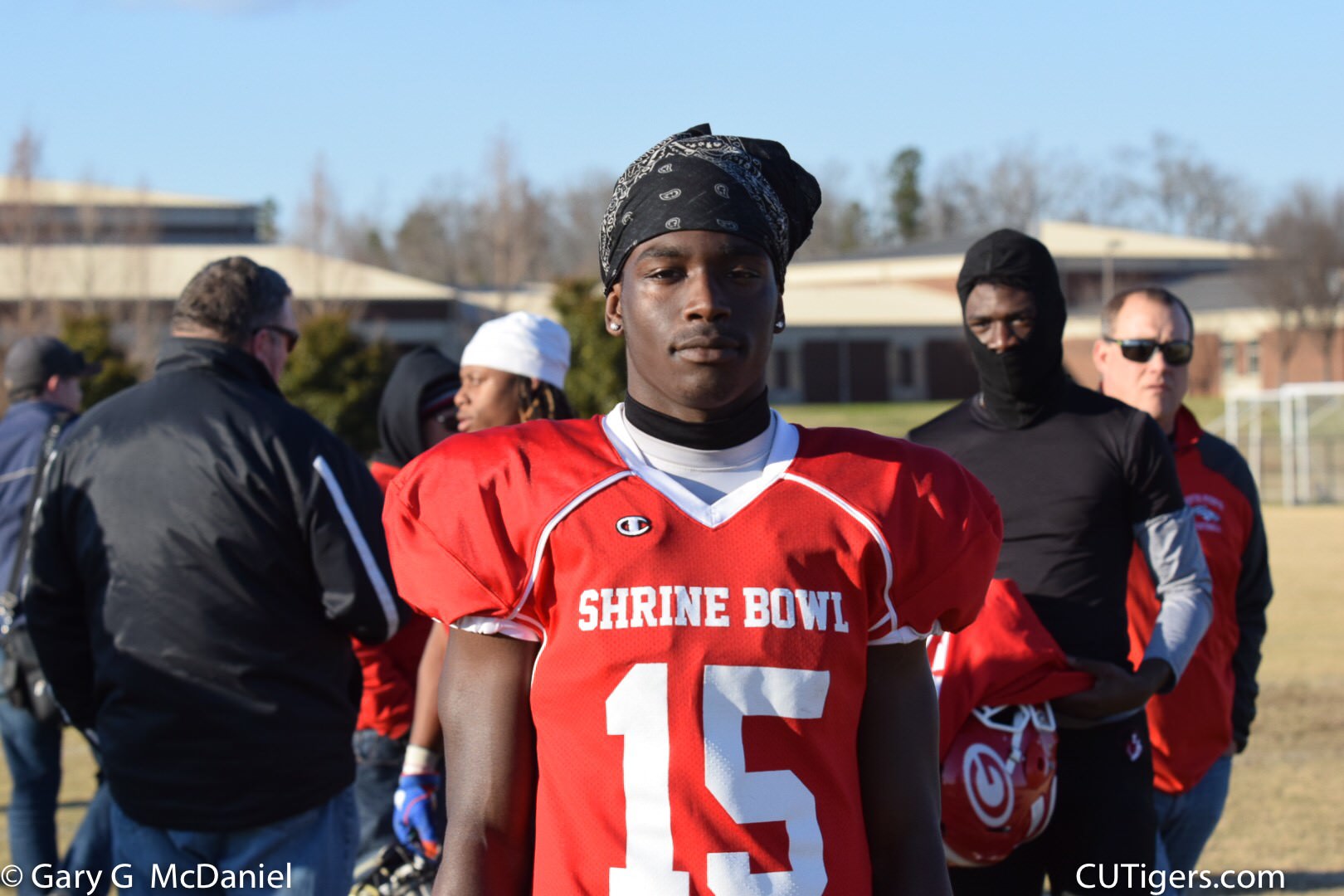 The 6-foot, 181-pound senior quarterback led the Stallions to a 15-0 record and a fourth-straight Class AAAA state championship this past season. Kendrick completed 186-of-256 passes for 2,693 yards and 30 touchdowns against just six interceptions. He also rushed for 1,195 yards and 19 TDs, throwing and running for a combined 19 touchdowns in five postseason games. The 2016 Herald All-Area Offensive Player of the Year, he concluded his prep football career with 6,134 passing yards, 1,919 rushing yards and 98 total touchdowns.

Kendrick has volunteered locally with Read Across America, an elementary school literacy-outreach program, and he has donated his time as a youth football coach and mentor. “Bottom line, Derion Kendrick is the best player in the state of South Carolina,” said Bobby Collins, head coach of Lancaster High. “What makes him dangerous is that he loves to compete. He’s the key to their success.”

Kendrick has maintained a B average in the classroom. He has verbally committed to play football on scholarship at Clemson University in the fall of 2018.

The selection process is administered by the Gatorade Player of the Year Selection Committee, which work with top sport-specific experts and a media advisory board of accomplished, veteran prep sports journalists to determine the state winners in each sport.

As a Gatorade Player of the Year, Kendrick will be able to select a national or local youth sports organization to receive a grant as part of the Gatorade Play It Forward program. Every Gatorade Player of the Year state winner receives a $1,000 grant to donate and will have the opportunity to enter for an additional $10,000 spotlight grant by writing a brief essay explaining why their selected organization deserves additional support. 12 spotlight grants – one for each sport – will be announced throughout the year. 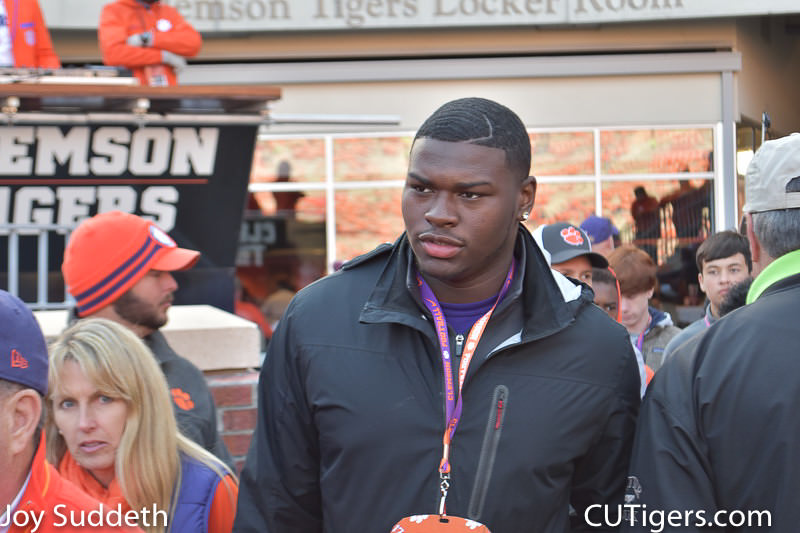 Curtis Fann is a highly coveted DL/DE out of the Peach State in the 2019 crop of potential recruits the Tigers are keeping their eyes on. He has named a final four already and, as expected, the Defending National Champs are squarely in the mix along with Florida, South Carolina and Auburn for the big-time Georgia standout. Stay tuned as we monitor Fann and the Tigers’ 2019 class here on the Radar at CUTigers.com! 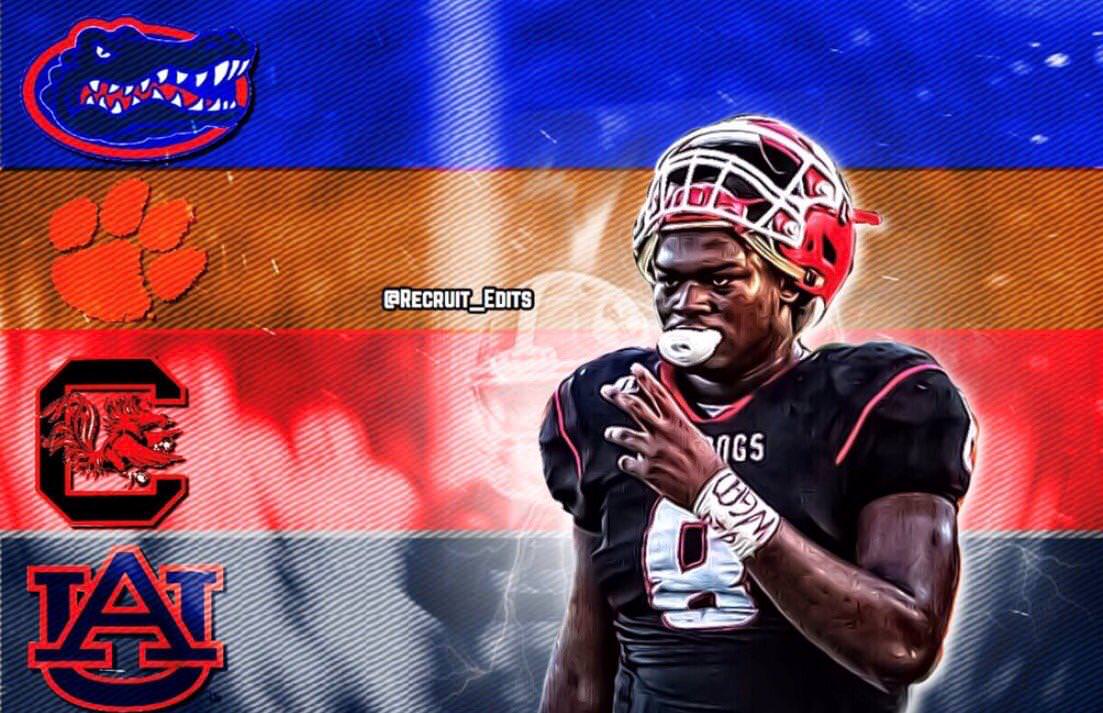 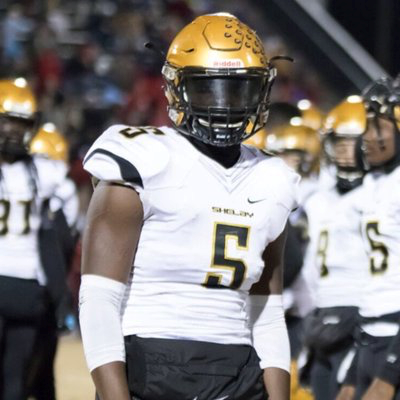 Clemson reached into the Tar Heel State and dispensed its latest offer to Jaylon Scott, a linebacker out of Shelby, NC who is gaining a lot of traction in recruiting circles all over the map.

Stay tuned as we continue to track the LB out of Shelby. 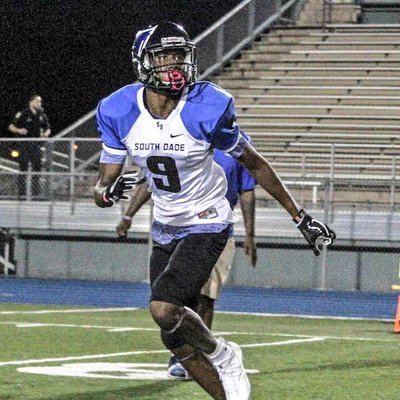 Clemson reached into the Sunshine State, deep into Miami-Dade County and offered former 2019 Florida WR commit Frank Ladson, Jr. Both Ladson and fellow teammate Rique Stevenson pulled off their commitments to the Gators and almost instantly received offers from the Defending National Champs.

Stay tuned, as the Canes of Miami are also squarely in the mix here. Clemson and its recent success in Florida has staying power, especially after the way the Tigers dispatched the Canes in the ACC Championship. But keep checking back right here for your Clemson recruiting info and intel!

****Another New Offer in Florida 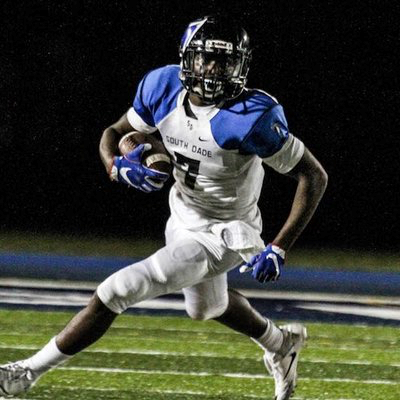 Top-tier athlete Rique Stevenson just picked up a Clemson offer for the 2019 Class on Monday and subsequently de-committed from Florida on Tuesday. Clemson's staff has been on the road in the Sunshine State all week and making in-roads to recruits all over the Tigers’ recruiting footprint. Stay tuned right here at CUTigers.com and our Recruiting Radar forum for all your recruiting updates, news and intel!

POLL: Who is the @amfam ALL-USA Football Offensive Player of the Year? https://t.co/x7Ha0tYY95 pic.twitter.com/m6GdxN0gMz

You already know where home is!!

Was told there was a great home visit!! We are ALLIN