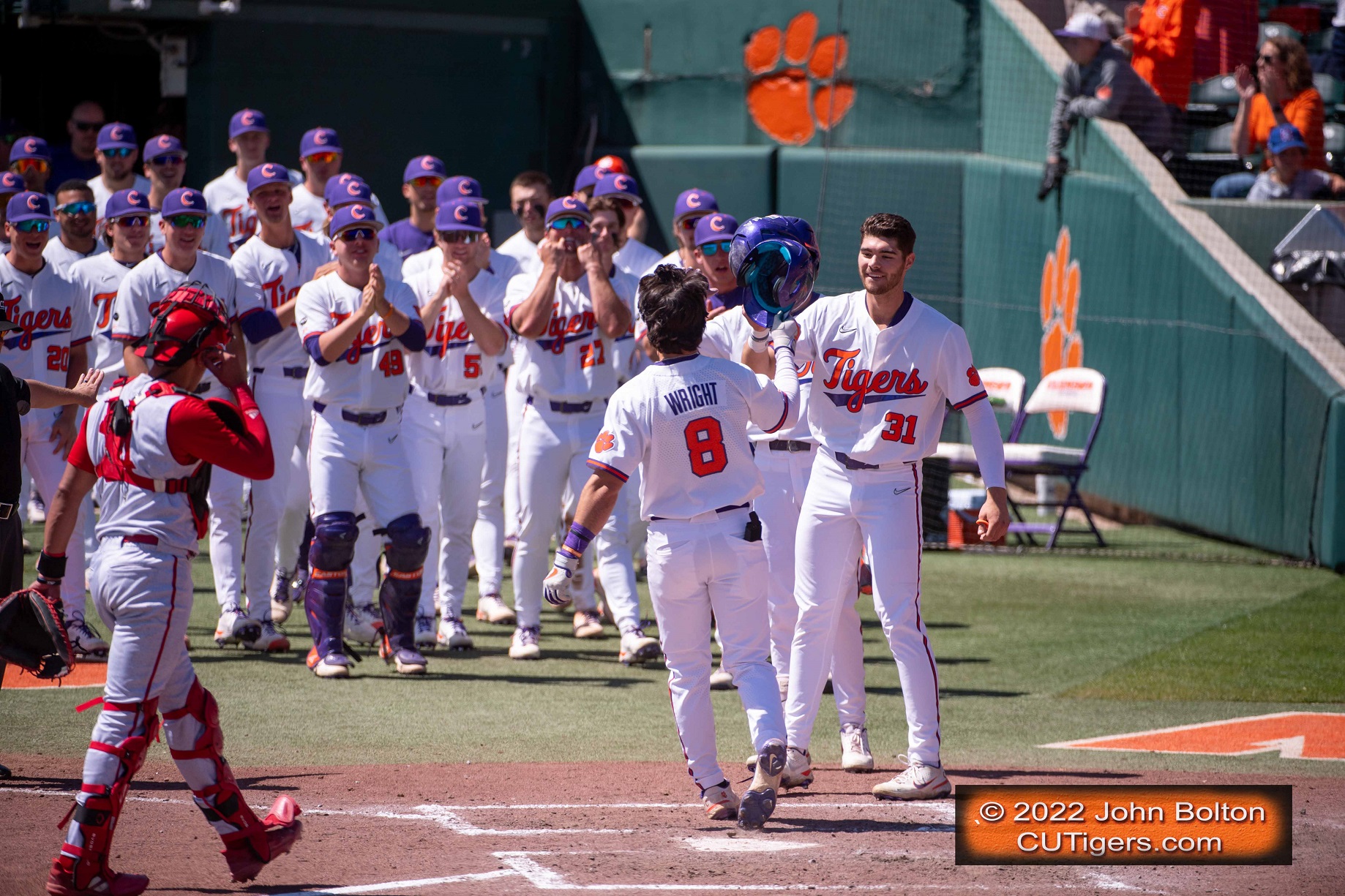 
WRIGHT HAS BIG SERIES BUT CLEMSON LOSES RUBBER MATCH TO NO.22 NC STATE 9-7

CLEMSON, SC - The Tigers were coming off a 9-3 win at Winthrop on Tuesday, but they were in desperate need of ACC wins after a 1-4 start in conference play. They got off to a great start on Friday, beating No.22 NC State 14-3 but lost 5-2 on Saturday and 9-7 in the rubber match on Sunday.
NC State came into the series ranked among the top offenses in the nation, a few spots ahead of the Tigers and averaging 8.2 runs per game. The Tigers did a great job at stifling that explosive offense on Friday, beginning with Mack Anglin, who pitched 5 scoreless innings, allowing just 3 hits with 8 K's. He improved to 4-2 on the season. Tallent, Lindley and Williams were also strong out of the pen. Meanwhile, the Tigers' offense scored early and often, jumping out to a 3-0 lead in the 1st and breaking the game open with 7 runs in the 4th. They did not hit a HR in the game but  still led 14-0 by the end of the 6th and finished with 16 hits. Blackwell reached base all 5 times from his leadoff spot, going 3-3 with 2 walks. Grice also reached base 5 times, going 3-4 with 2 walks and 2 RBI's. Hawkins, Corbitt, Brewer and Fairey also drove in 2 runs each.
The Tigers could have used some of that offense on Saturday because they failed to score a run in the final 7 innings of the 5-2 loss. The Tigers took a 1-0 lead in the 1st on a double by Wagner, but a costly throwing error by Hoffmann with 2 outs gave State a 2-1 lead in the 2nd. Blake Wright tied the game in the bottom of the 2nd with a solo HR, but the Tigers' bats went cold for the rest of the game, managing just 4 more hits. State took a 3-2 lead in the 4th on back-to-back 2-out doubles off Hoffmann, and a 2-run single in the 6th, again with 2 outs, gave them insurance. The 2-out hitting by State would be the Tigers' downfall on Sunday as well.
State jumped out to a 4-0 lead in the rubber match on Sunday thanks to a 2-out, 2-run HR in the 2nd off of Clayton and another 2-run HR in the 3rd. However, the Tigers responded with 6 unanswered runs over the next 3 innings to take a 6-4 lead. After loading the bases with no outs in the 3rd, Wagner grounded into a double play but got the Tigers on the scoreboard. They made it 4-3 in the next inning thanks to a 2-run HR by Wright, who also homered on Saturday. Wright had started just 7 games before this weekend but had a tremendous series against State, going 8-14 with 2 HR's, 5 RBI's and a walk. He now has 5 HR's in just 43 at bats this season and is batting .302. The Tigers took a 6-4 lead in the 5th on a double by Corbitt, a sacrifice by Grice and a single by Wright, but the Tigers' bullpen was unable to hold the lead. Closer Ryan Ammons walked the leadoff man in the 6th, which is always a disaster. After a 2-out single made it 6-5, Ammons gave up another single and intentionally walked the next batter with first base open. He then walked in the tying run, again, with 2 outs. Ammons started the 7th with a single and a double, and Olenchuk gave up a 2-run single out of the pen to make it 9-6. The Tigers would make it interesting in the 9th, soring a run and bringing the tying run to 2nd after a Wright single and French double, but that left them with 9-hitter Fairey, a lefty, at the plate with 2 outs. Monte wanted a righty at the plate against State's left-handed pitcher, so he turned to true freshman David Lewis, who was just 1-4 on the season. It's a tough spot for such an inexperienced true freshman to be in, and Lewis struck out looking on a 2-2 count. Personally, I would have rolled the dice with Fairey regardless of the lefty-on-lefty matchup.
The story of the series was 2-out hitting. State drove in 9 runs with 2 outs on Saturday and Sunday, while the Tigers scored just one, coming in the 9th on Sunday. It was a tough rubber-match loss for the Tigers after having a late lead, and an ACC series win over a ranked divisional team could have been a big momentum builder. The Tigers have yet to win an ACC series at 2-6, and things don't get easier from here. They have to go to No.14 Notre Dame, which just won at No.5 FSU, next weekend. And before that, they get to host No.10 UGA, a red-hot team that just waxed Florida! The good news is that the Tigers' offense is scoring runs despite the dreadful slumps for Brewer and Grice. The former had an abysmal week, going 0-15 in 4 games before Monte pinch hit for him after 2 at bats on Sunday. Grice has been a little better lately, but he was 0-4 with 2 K's on Sunday, and his .229 average is well below what we expect from the All-American, and he's been stuck on 4 HR's for almost a month. I asked Monte after the game about Brewer, and he thinks that he's just down on himself and pressing much too hard. He's a good center fielder, and his absence probably cost the Tigers a run when Grice was moved to center and missed a deep fly off the fence. If those two guys can start playing to their potential offensively, this will be a top-10 offense and overcome a lot of bad games by the pitchers!
Post-game interviews are below.
MORE CLEMSON BASEBALL, SOFTBALL AND FOOTBALL COVERAGE HERE