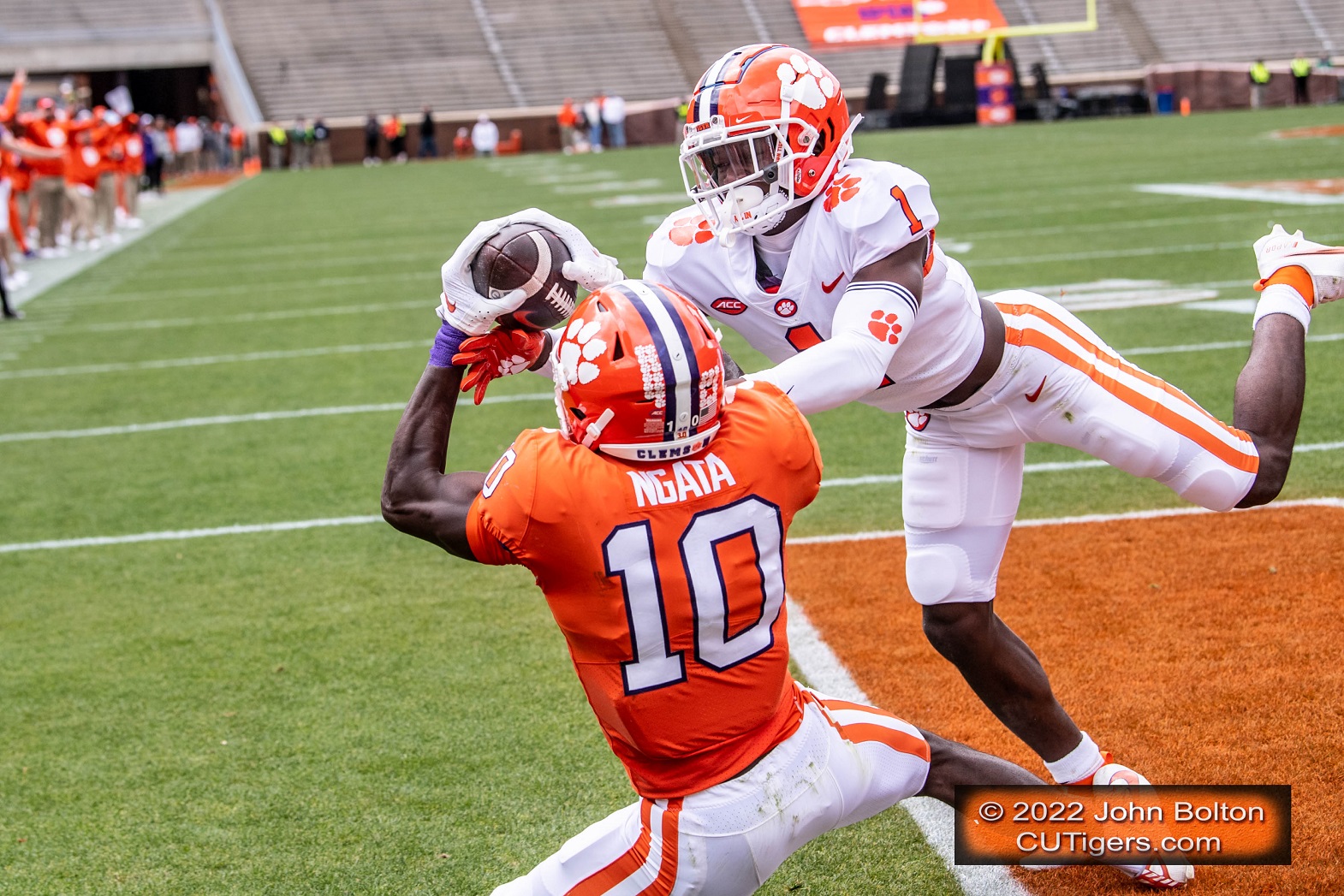 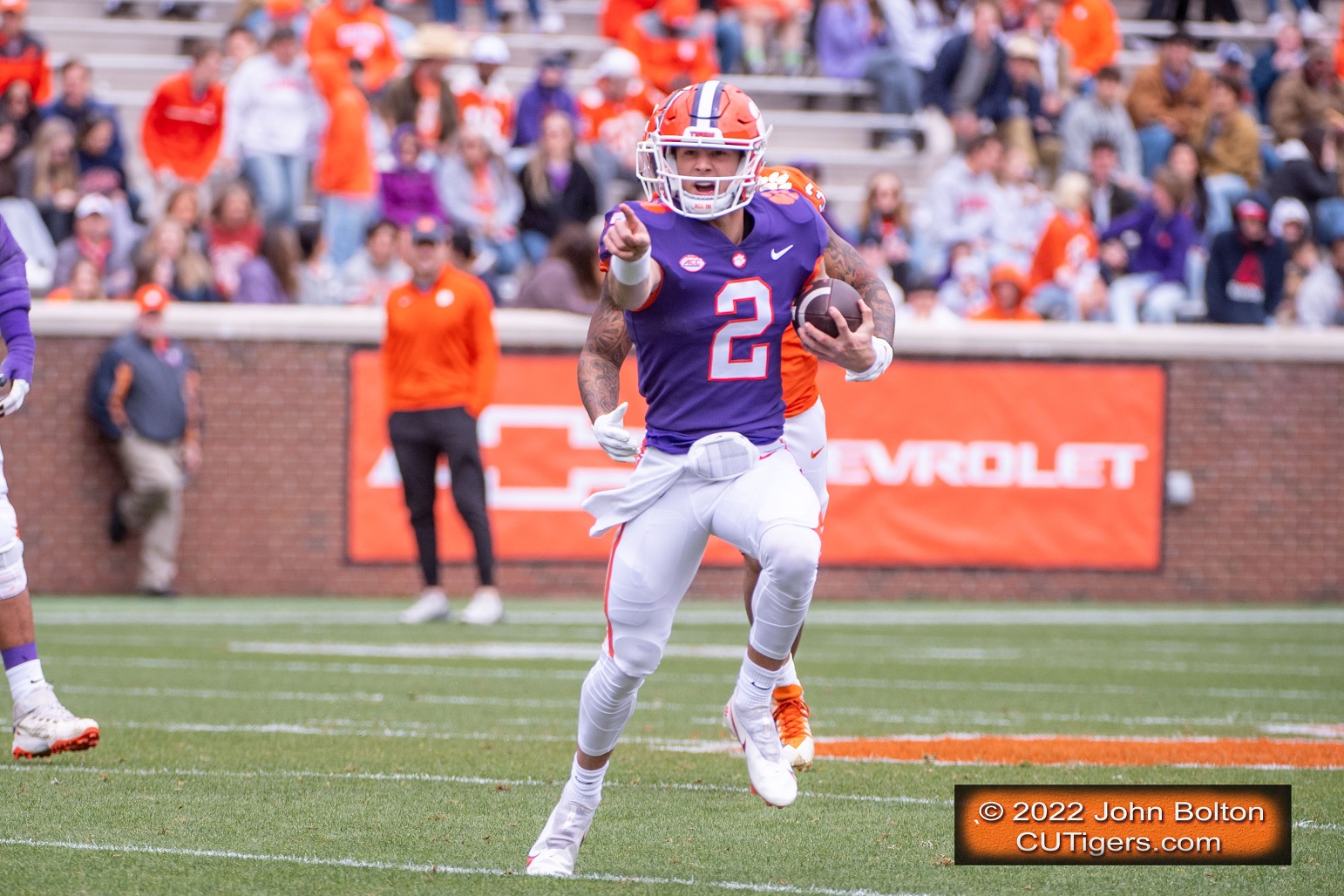 CLEMSON, SC - Well, I wrote in my preview that if you were hoping for lots of offense and points, you might be disappointed. The two offenses went a combined 6 possessions without making a first down, and 4 of the 5 scores were set up by turnovers in the red zone! I was a little surprised that Dabo ran freshman Cade Klubnik out on the field first for the White team. In these situations in the past, Dabo would give that honor to the upperclassman, Hunter Helms, rather than a true freshman that had only been on campus for 3 months. That speaks to how impressed Dabo is with the future superstar. In fact, Cade got the lion's share of the snaps for the White team on Saturday, as Dabo brought both he and DJ back into the game late in the 2nd half, something he has also not done in the past. Dabo told me after the game that bringing them back in late was part of the game plan, but I think he wanted to give them some more opportunities because it was such a low-scoring game with so many 3 and outs. Several of the starters on both sides of the ball did not play as much in the second half. 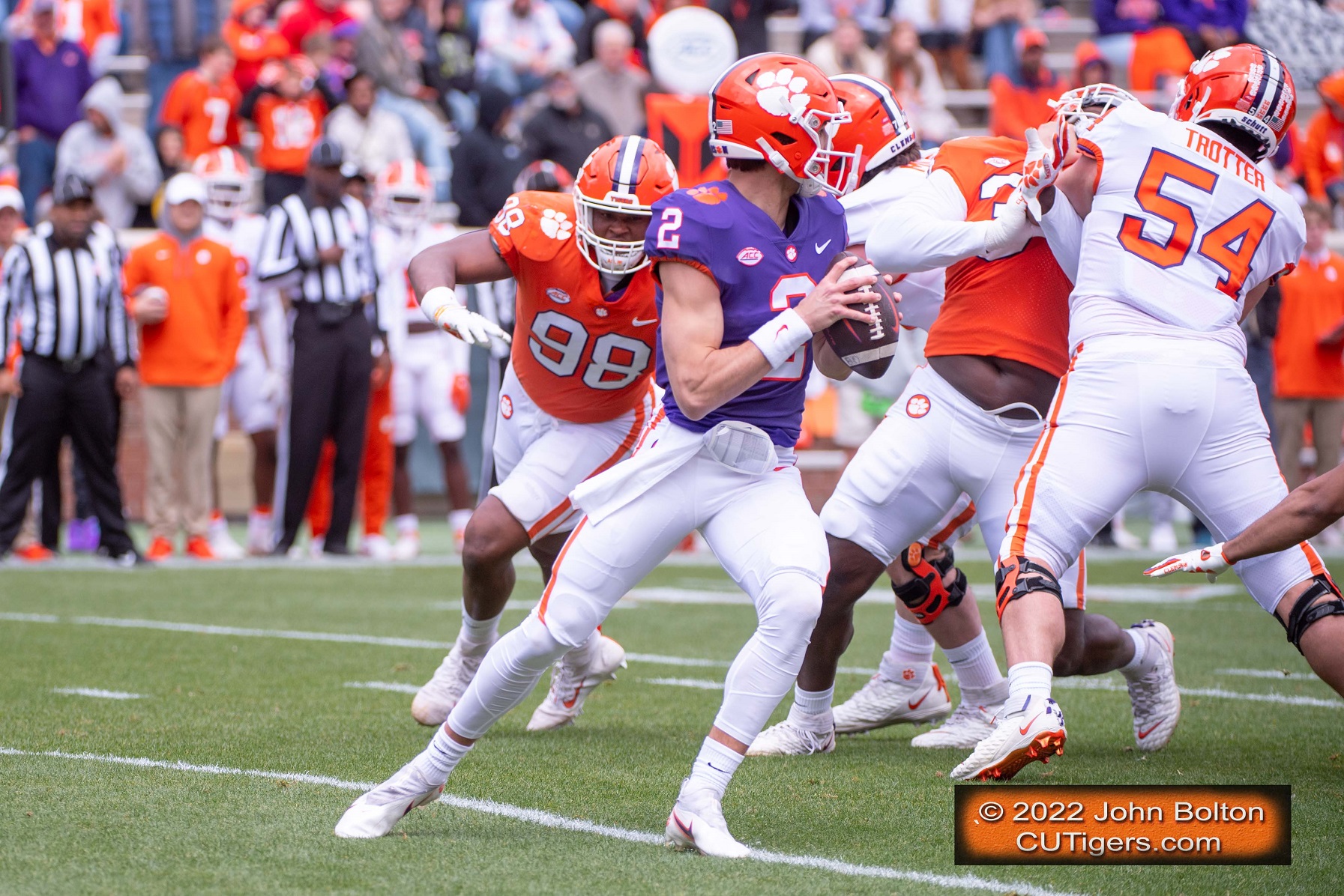 The first score of the game was a 29-yard field goal by Weitz for the White team on its first possession of the game. Ironically, the field goal was set up by a dropped punt snap by #29 BT Potter. Cade Klubnik entered the game to a big applause from the fans but was unable to capitalize on the turnover. Later in the 2nd quarter, Orange was also given the ball in the red zone after another dropped punt snap, this time by the other potential starting punter, Aidan Swanson. Unlike White, DJ and the Orange team were able to turn the mistake into 7 points to take a 7-3 lead. Ngata made a great catch in the end zone, but Dabo ruled the play a sack. I disagreed with the call because, although DJ was touched, he released the ball before he would have been taken to the ground in a real game. It was a great pass, considering he was falling backwards with two defenders in his grill. The call was irrelevant because DJ bounced back with a 23-yard completion to Hampton Earle, and that set up a 6-yard touchdown run by Mafah. 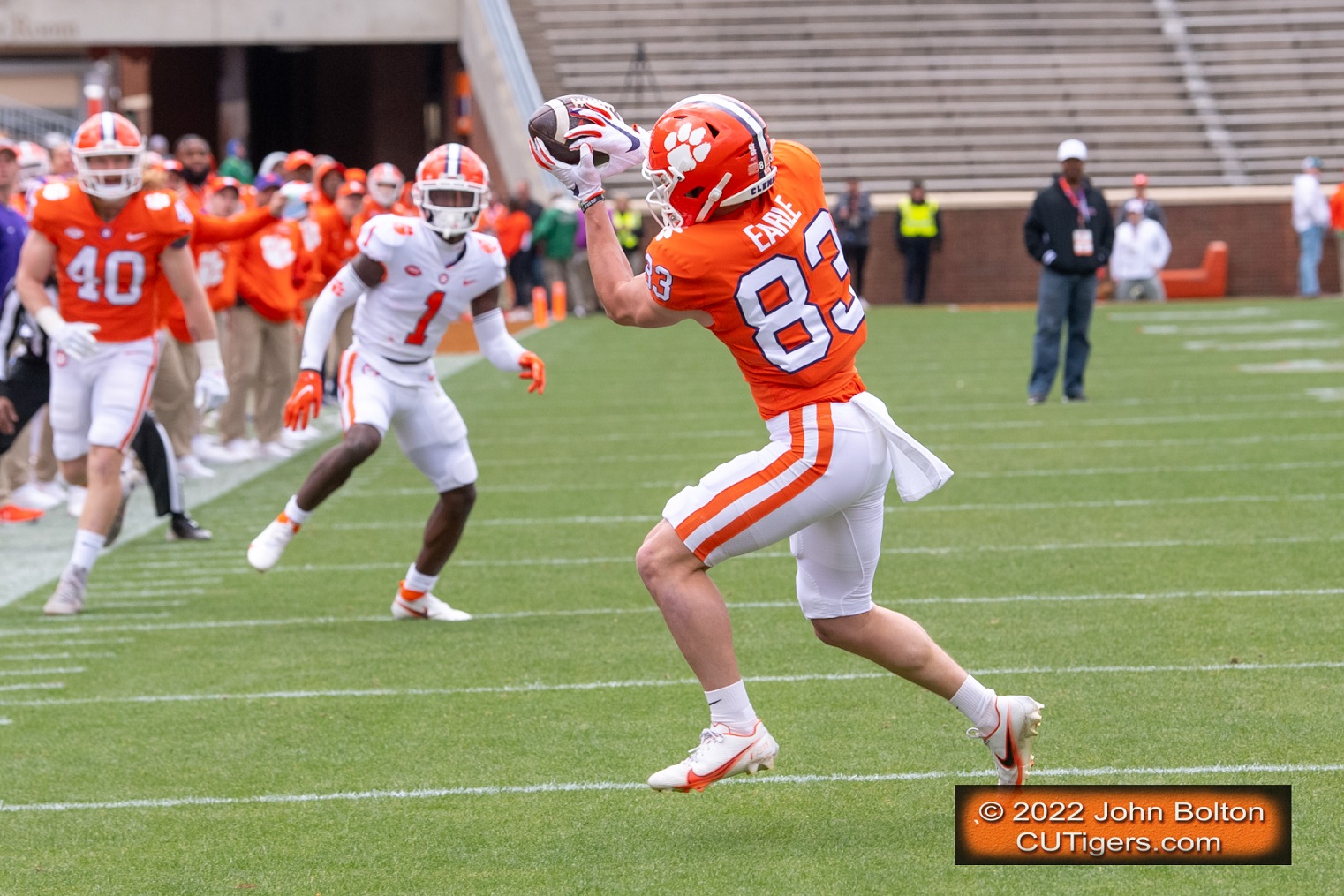 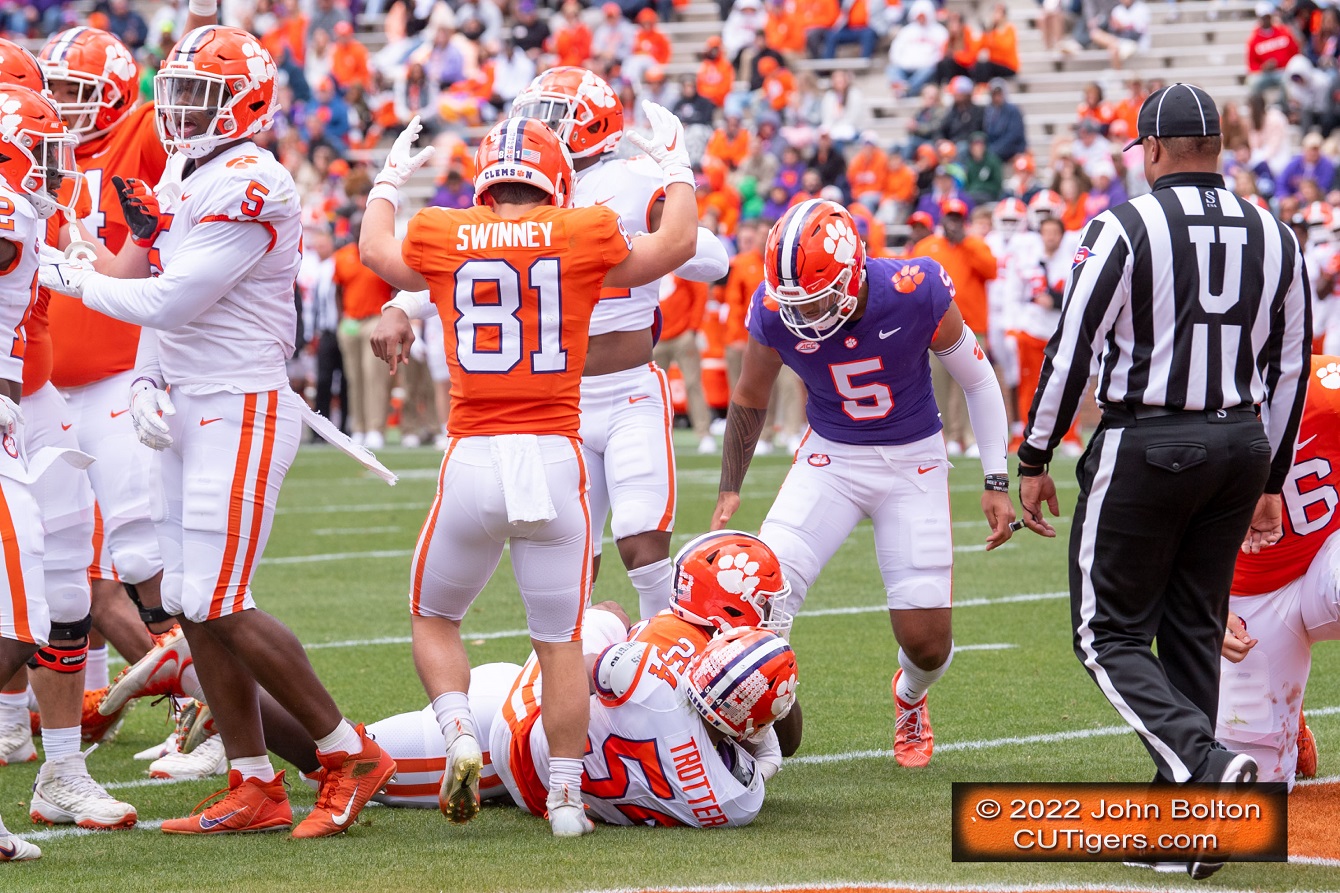 The score remained 7-3 until the 3rd quarter when Weitz made a 36-yard field goal to make it 7-6. Hunter Helms, who started the 2nd half at quarterback for White, set up the score with a 25-yard completion to TE Jake Briningstool. At the end of the 3rd quarter, freshman safety Sherrod Covil intercepted a pass by DJ and returned it 31 yards all the way to the Orange 10-yard line. It was the only INT of the game. Once again, the White offense was given the ball in the red zone, but this time, they were able to capitalize with a touchdown. On the first play of the 4th quarter, Cade completed a 7-yard pass to Hamp Greene for the score to give White its first lead of the game. The 2-point conversion attempt failed, making the score 12-7. Later in the 4th quarter, QB Billy Wiles and Orange turned the ball over on downs, once again giving White the ball in the red zone. Weitz made his 3rd field goal of the game, this time from 40 yards, to give White a 15-7 lead. With time running out, DJ would move the Orange team to the White 24 in hopes of tying the game but ran out of time. 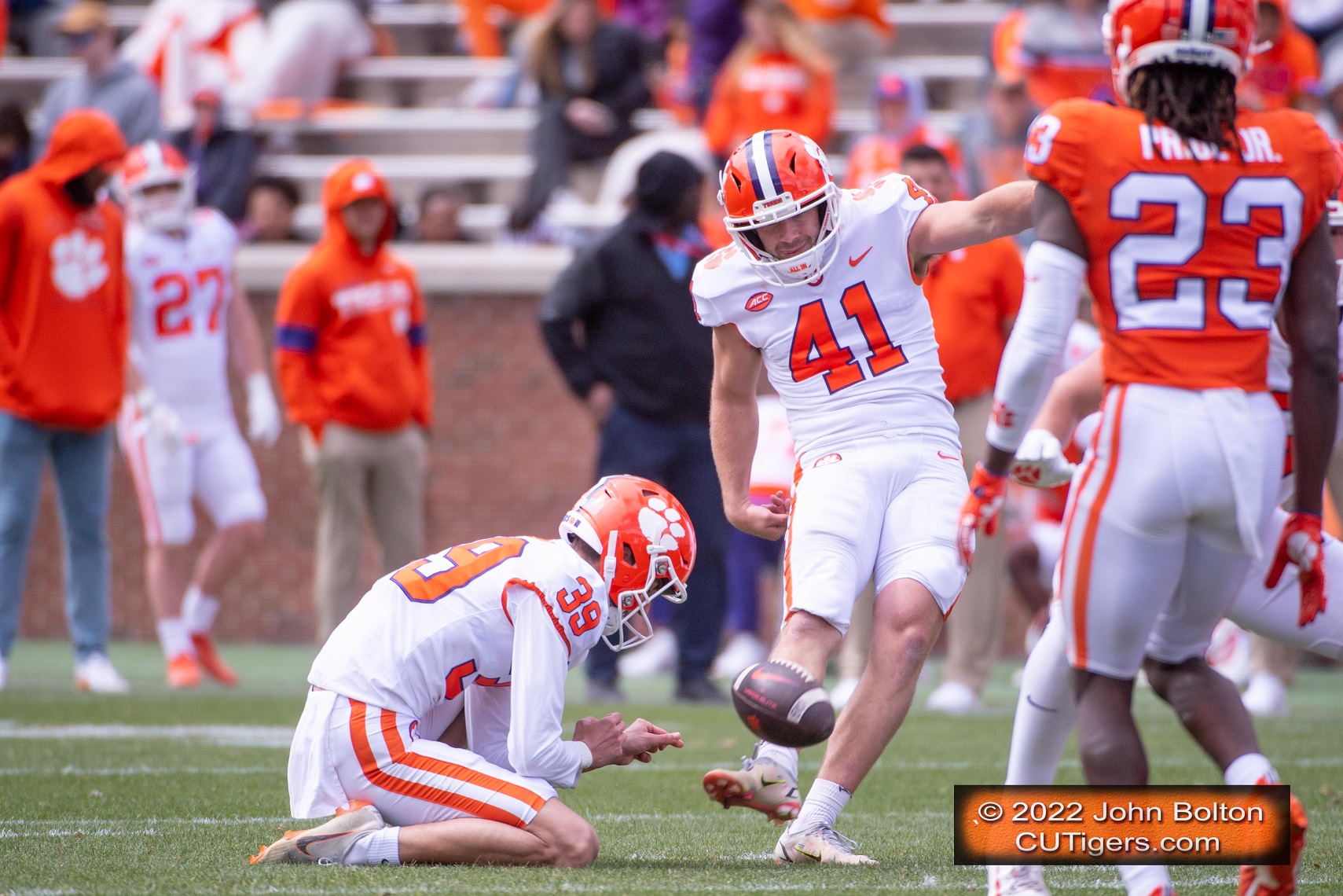 Again, the defense had its way early and often. If not for the turnovers in the red zone, it may have been a 3-0 final score! Henry, Murphy and XT appeared to be unblockable at times. Henry finished with 3.5 sacks and Murphy had 3, plus a tackle-for-loss. Tyler Davis also had a TFL. Mickens and Phillips each had a sack on safety blitzes, while Barrett Carter and Trenton Simpson posted sacks as well. The White team finished with 7 sacks, and Orange had 6. 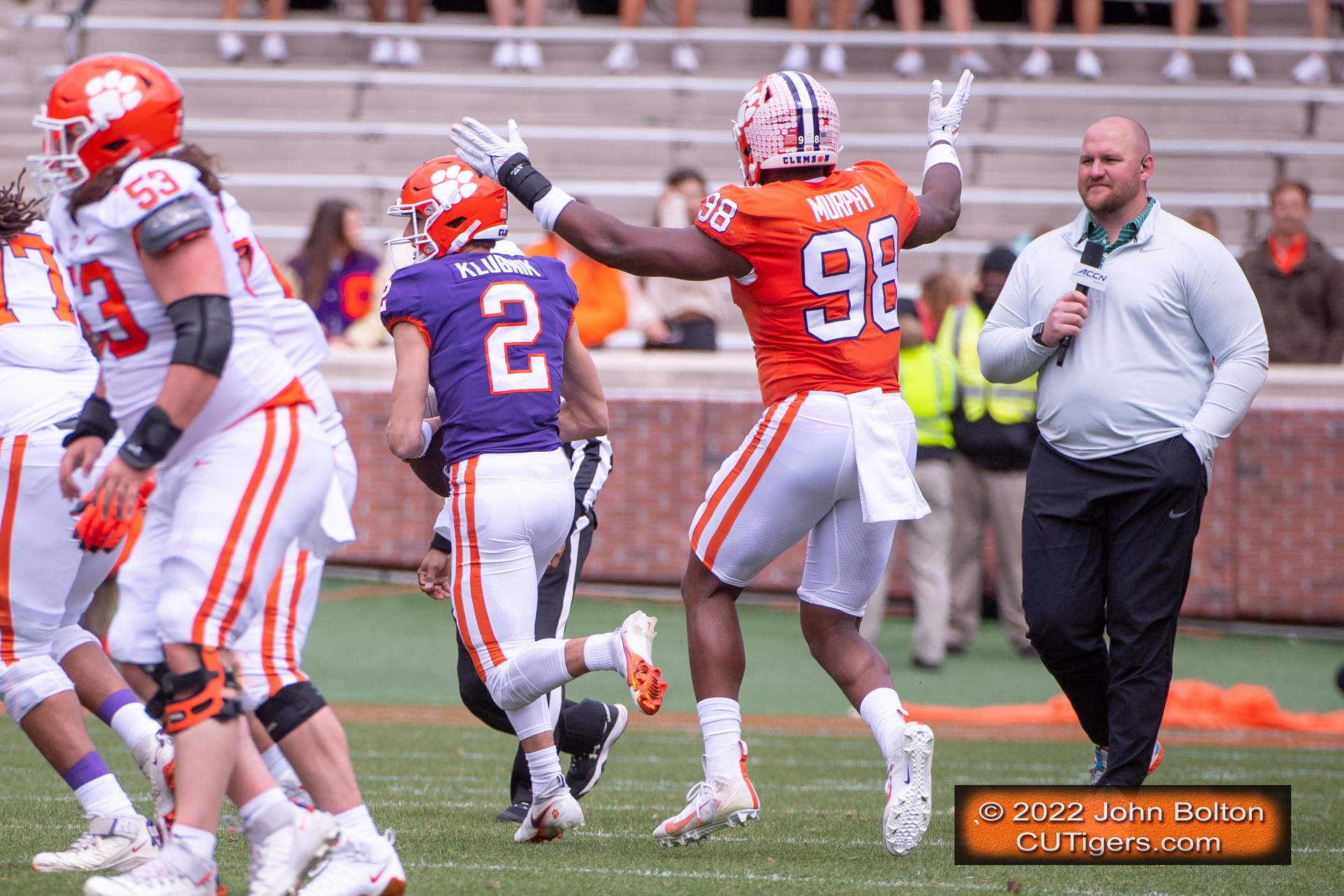 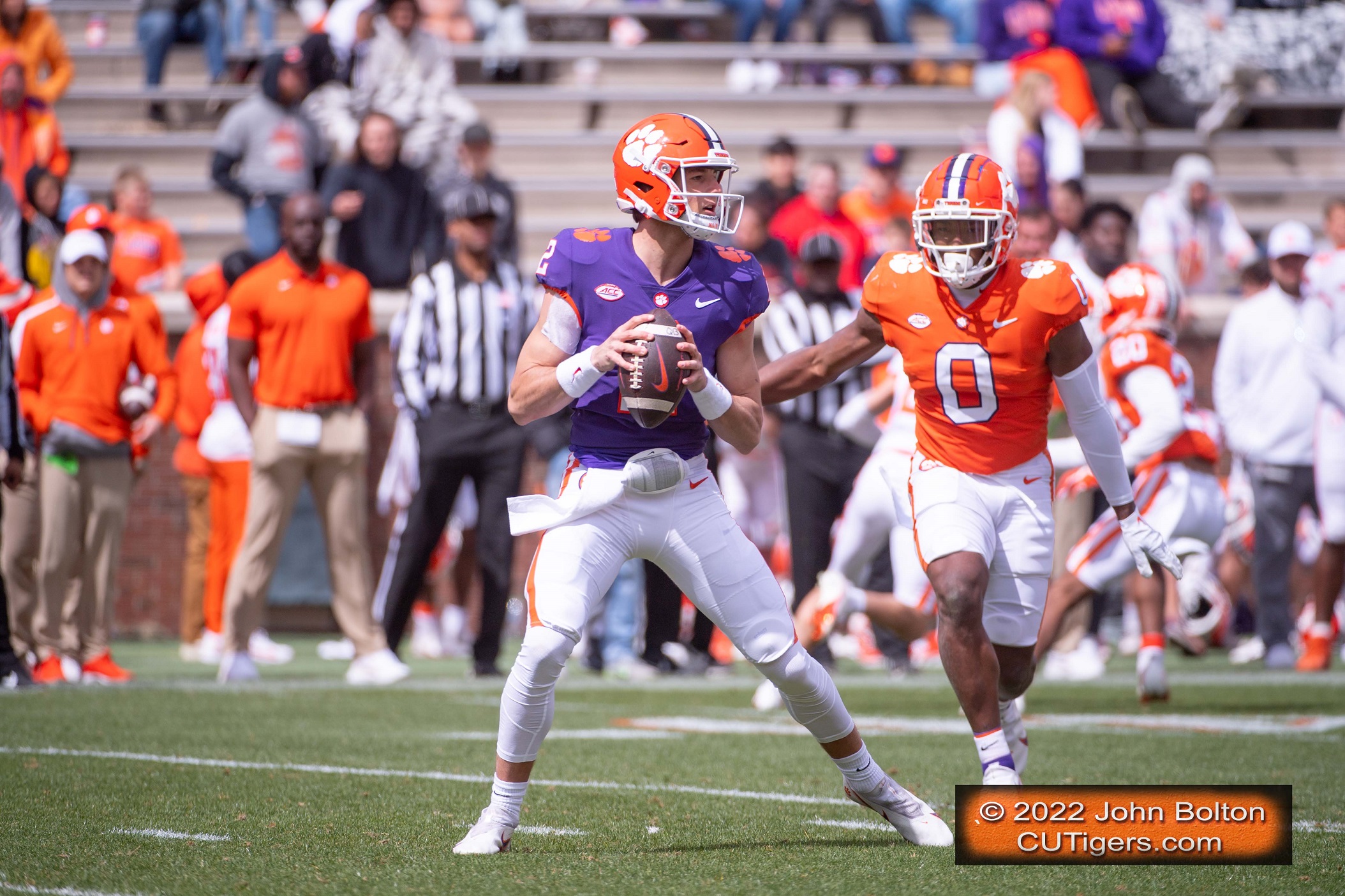 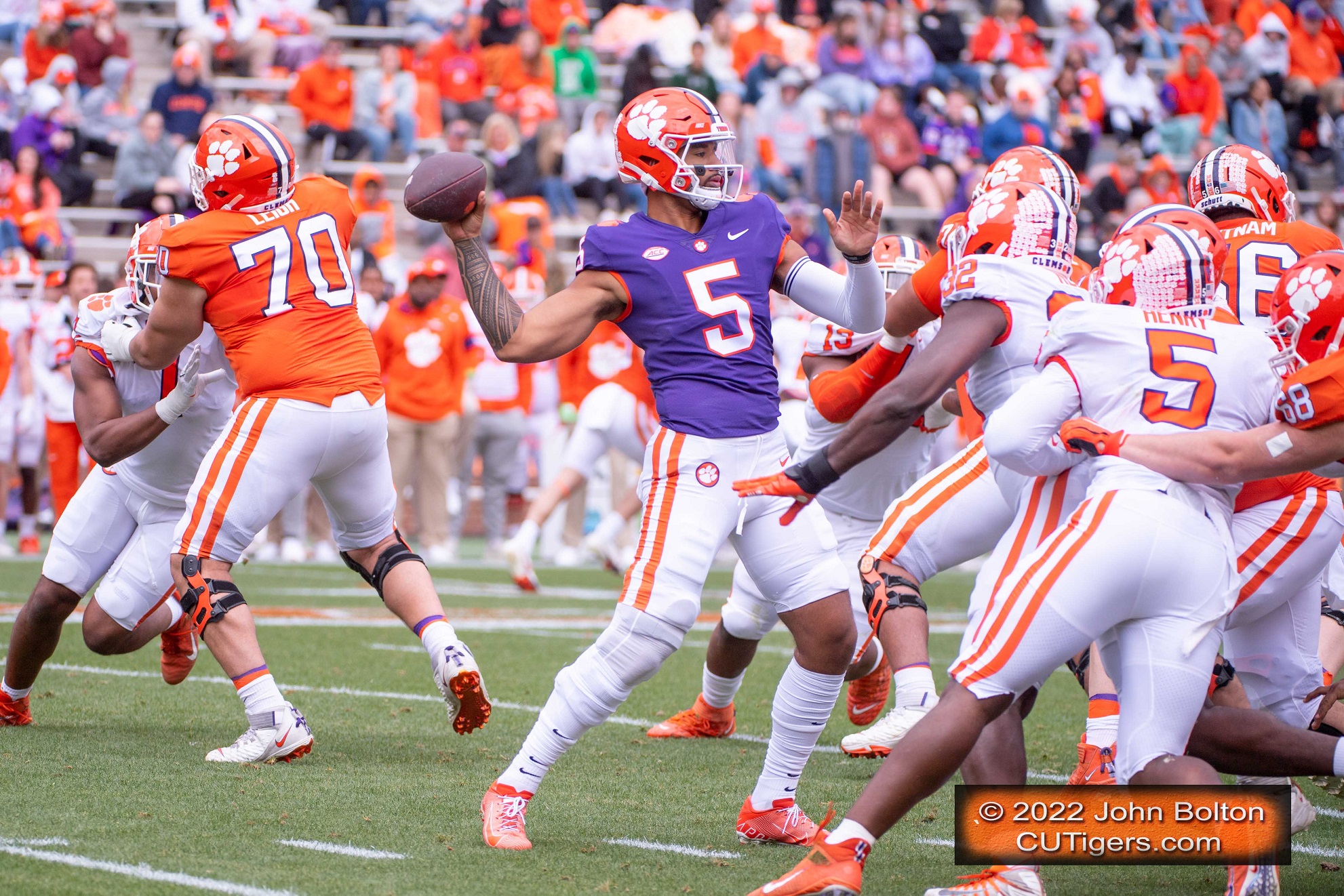 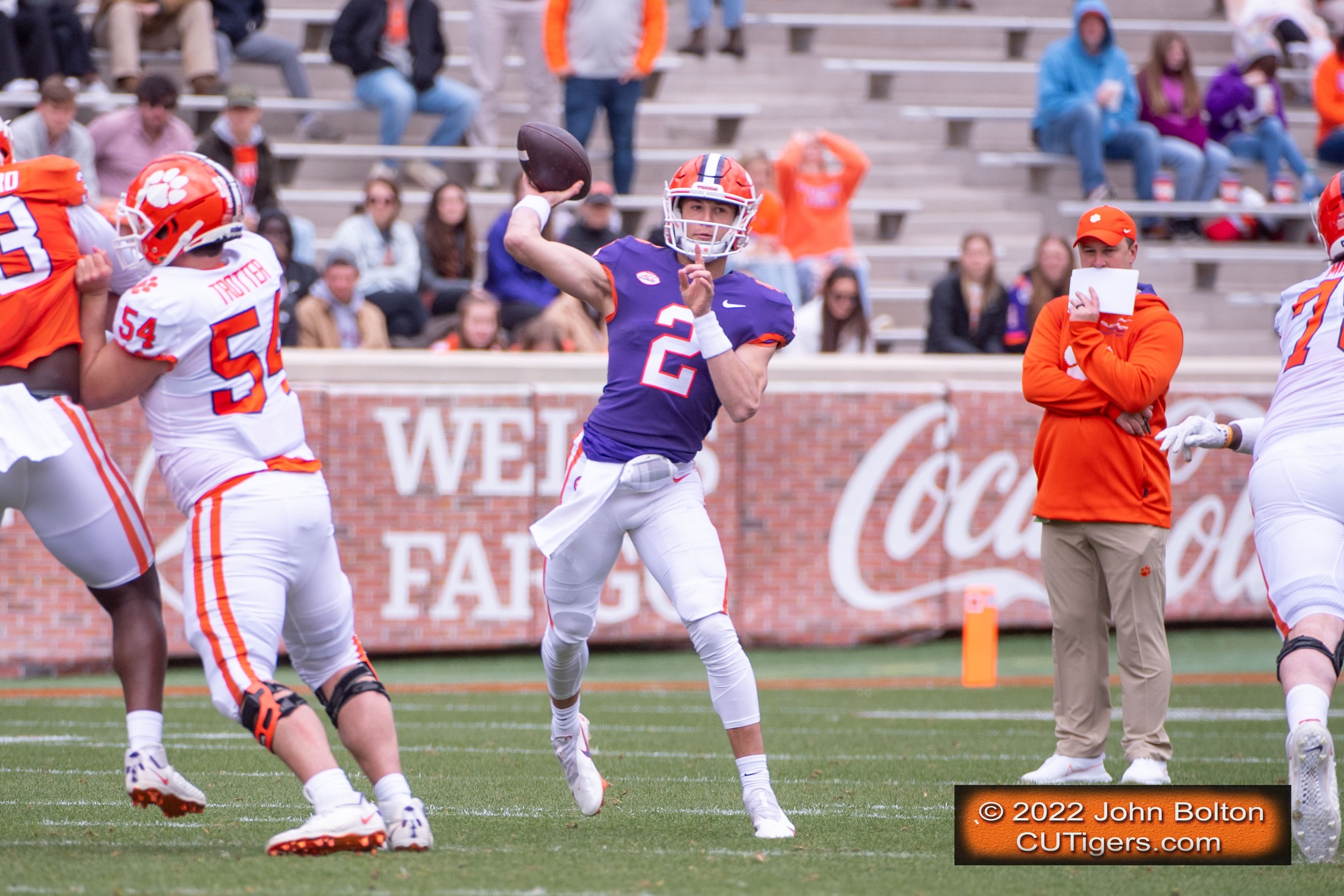 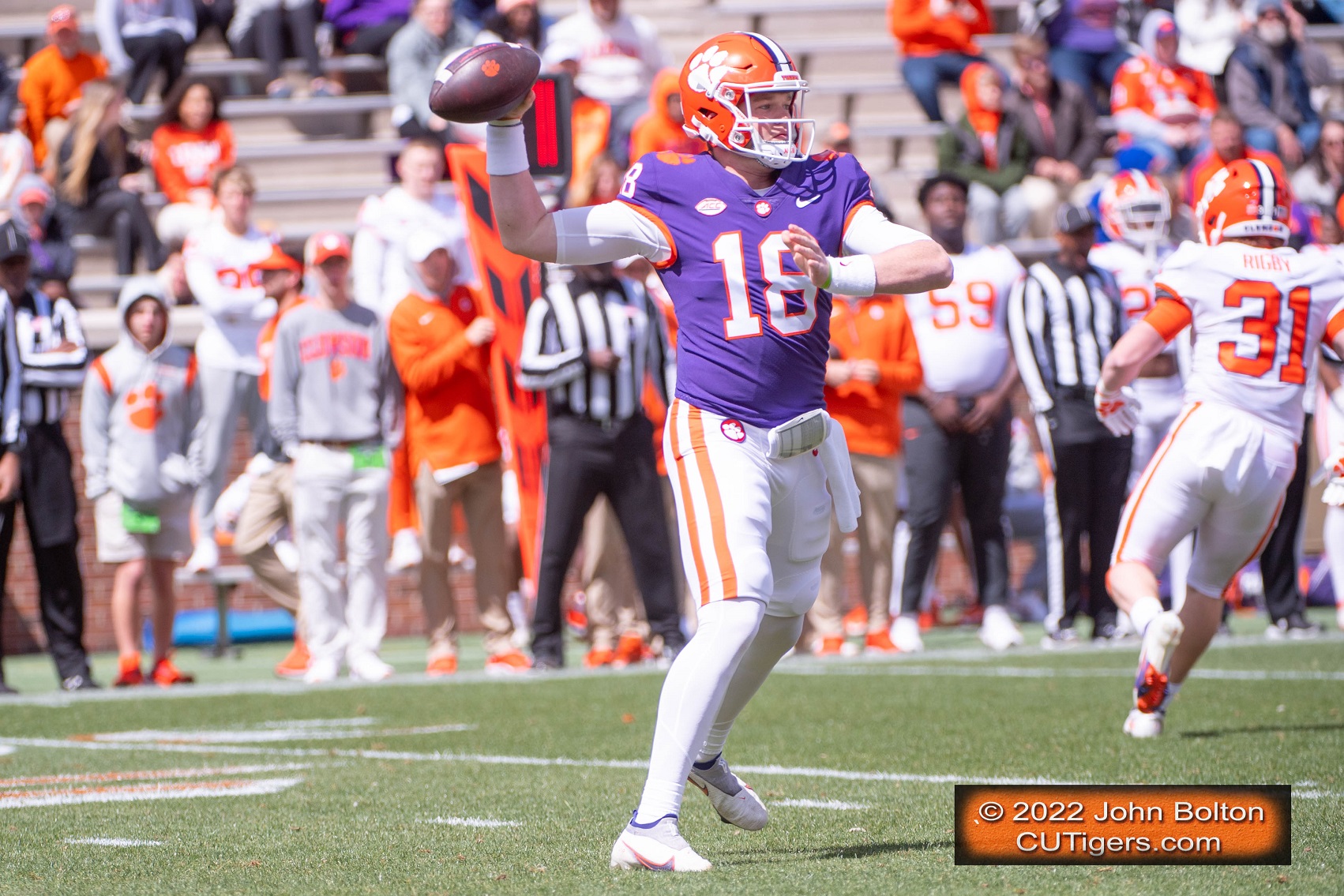 After the game, Dabo said that DJ was the clear starter going into August camp. He'll have to perform, though, because Cade is nipping at his heels. DJ was 17-36 for 175 yards with no TD's and one INT, although he should have had a TD as I stated earlier. Cade was 15-23 for 106 yards and one TD with no INT's. He also had a nice 14-yard run on 4th and 18. Helms was 6-10 for 56 yards. He has out-performed both DJ and Cade in a scrimmage from what I've been told, and he was more efficient than DJ on Saturday in the two possessions he got. He probably should have been on the Orange team so he could have received more playing time while still giving the freshman most of the reps. Helms will obviously not be the starter come fall, but from what I have seen, I feel comfortable that the offense would be fine in Hunter's hands if it came to that. As I first reported a week ago, Helms has been invited to be a counselor at the prestigious Manning Passing Academy in June. 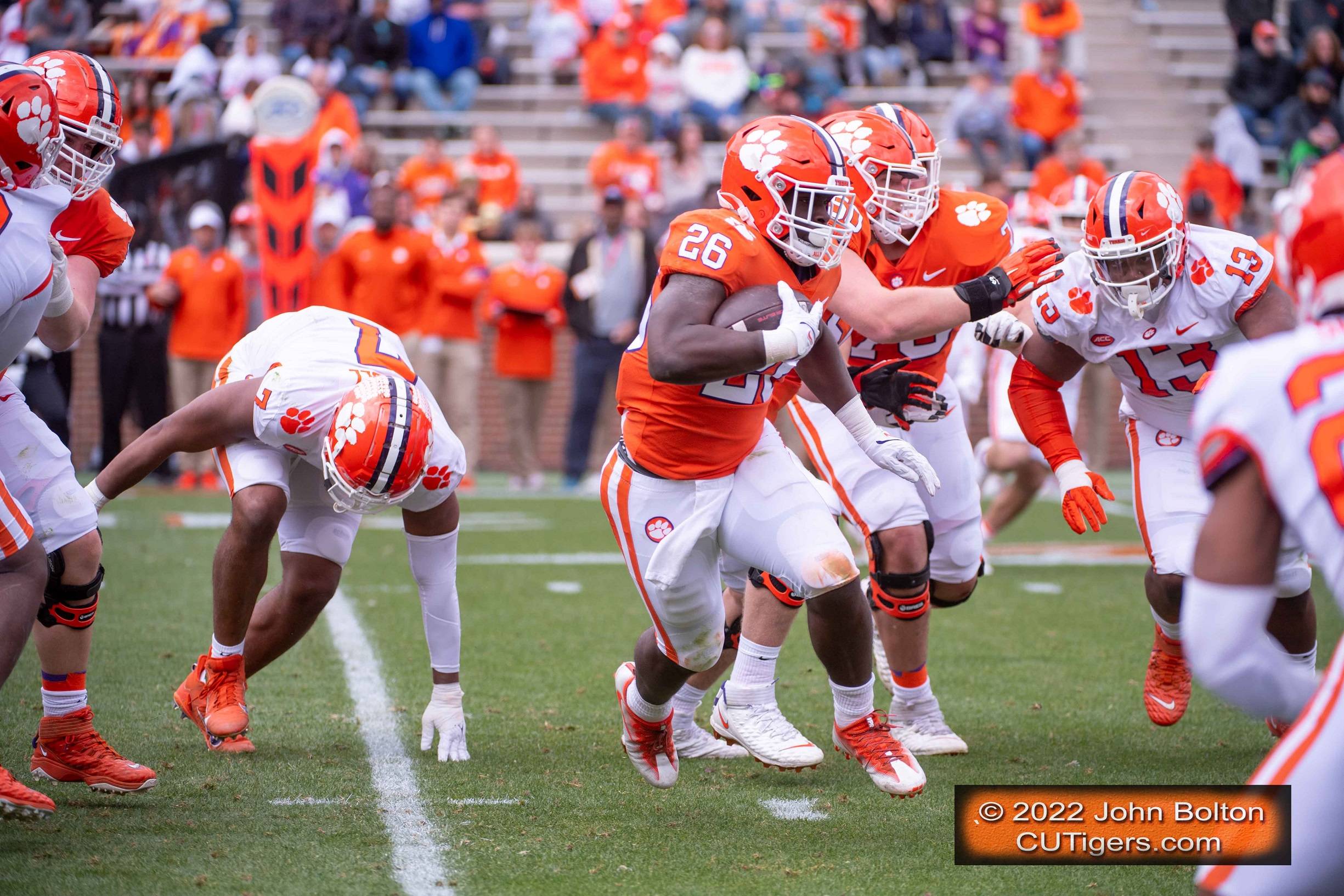 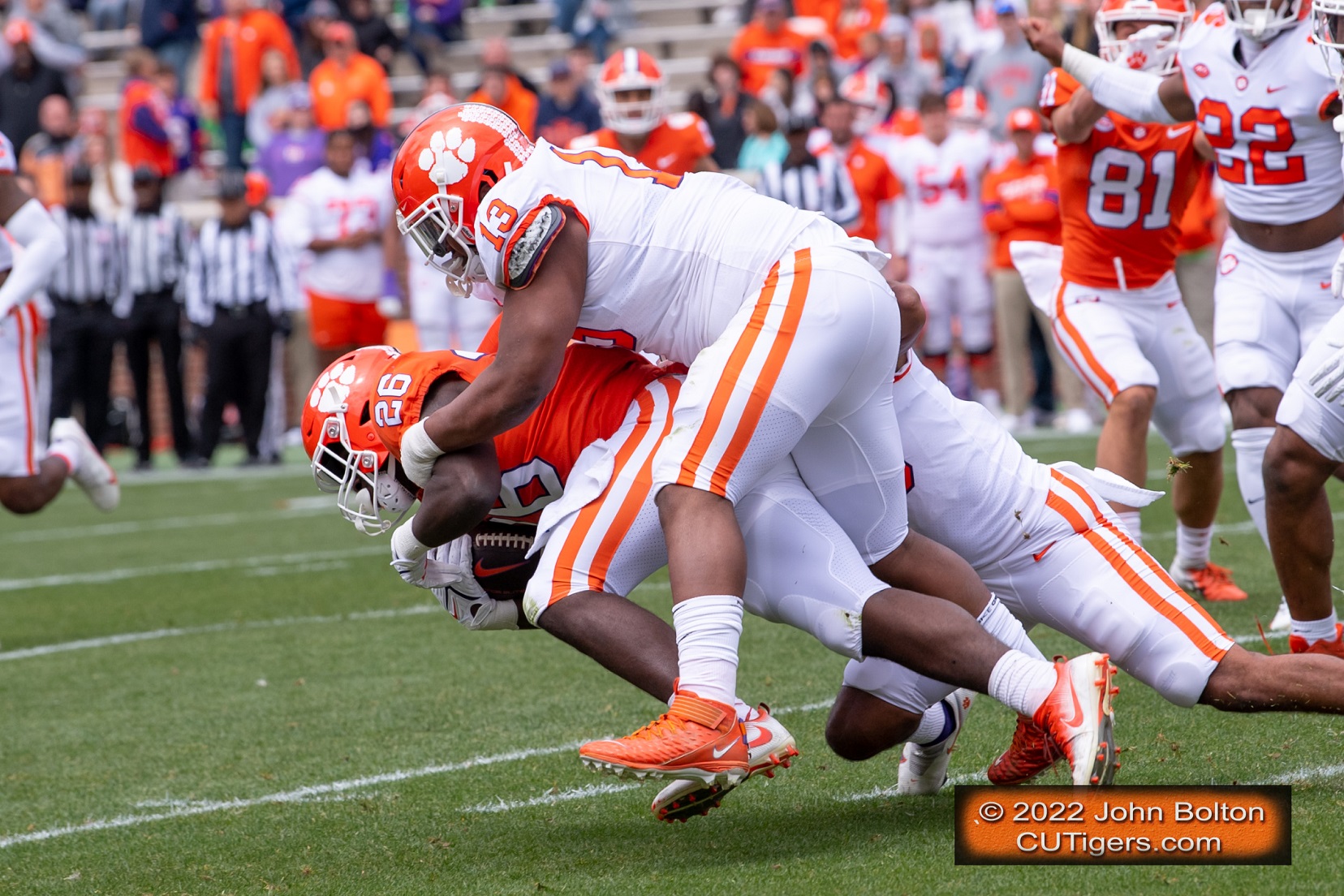 The only scholarship running back in the game, Phil Mafah, had a tough time running against this formidable defense. He had the only score for Orange but managed just 26 yards on 9 carries. He had some nice plays in the passing game, however, with 4 catches for 37 yards. Walk-on Hampton Earle led the Orange team with 5 catches for 65 yards. Ngata had 4 catches for 50 yards, including a one-handed catch on the sideline on a nice 3rd and 5 pass from DJ. He also had the aforementioned TD catch that was ruled a sack. TE Luke Price added 3 catches for 22 yards. He was also wide open on a wheel route, but DJ overthrew him. The other tight end, Jake Briningstool, led the way for the White team with 7 catches for 58 yards. Dacari Collins added 4 catches for 36 yards. He was hurt in the 2nd half, but Dabo said after the game that it wasn't serious. Brannon Spector had 4 catches for 33 yards. This was our first chance to really see Troy Stellato in action, and I was a little disappointed that he only had one catch for 3 yards. If he can stay healthy, I think he's going to be a good one down the road. 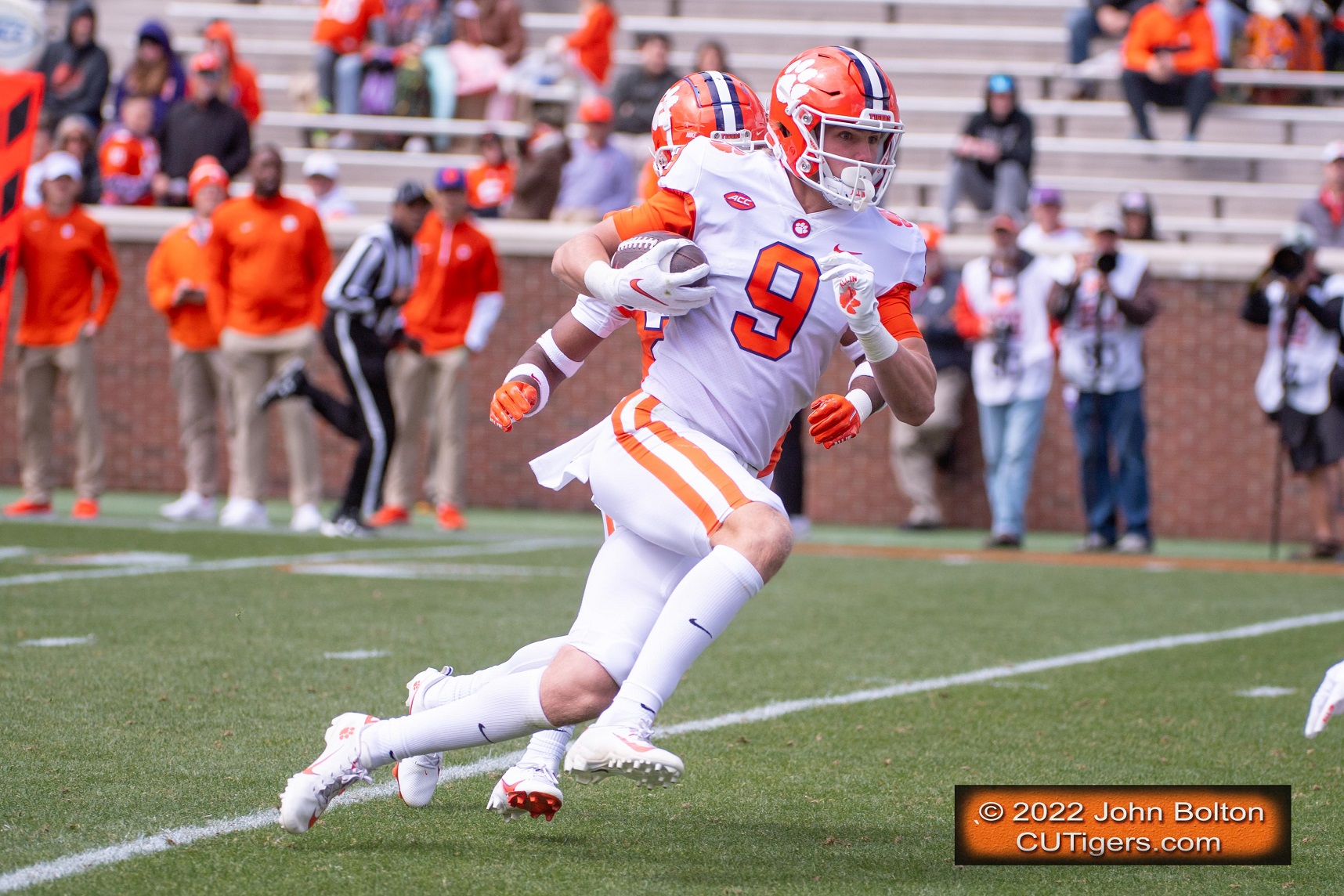 Dabo told me last week that the only remaining question mark he had with this team was the starting punter, and that question will remain as they begin August camp. Each punter dropped a snap in the red zone and cost his team points. They also both shanked punts. However, the average for each was respectable, and they each had a really nice punt or two. Remember, there were a grand total of 16 punts in the game, so that left plenty of room for good and bad. Potter had a beauty that should have been downed at the 5, but they let it bounce into the end zone for a touchback. Swanson had a 55-yarder that was downed at the one. His average was 45.5 yards on 6 punts, and Potter averaged 42.3 yards on 6 punts with a long of 53.
One of the bright spots of the game was that there was only one interception and no fumbles. There were also only 8 combined penalties. There were no bad snaps by the centers, which was great to see. I was surprised that they kept Putnam and Trent Howard on the same team, which meant that redshirt freshman Ryan Linthicum, who didn't play at all last year, started at center for the White team. Mason Trotter started at guard for White, and Dabo told me that he had practice all spring even though Dabo told us that he will miss several games in the fall for an undisclosed reason. Most important of all, no one was seriously injured! In retrospect, with all of the players that were out, they probably should have broken from their normal spring game format and played good-on-good, with all the starting offense on one team and the starting defense on the other team. That would have made it more exciting to watch and probably would have resulted in more points because each offense had very few play makers with so many players out. Nevertheless, I think it was a successful spring game and a valuable experience for a lot of young players that haven't played in front of a big crowd before. Shipley, Pace, Williams, Allen, Ennis, Randall, Parks and McFadden all sat out on the offensive side. Bresee, Williams, Zanders, Venables, Lukus and Greene were all out for the defense. I can't wait to see what this team looks like with all those guys back in the fall! 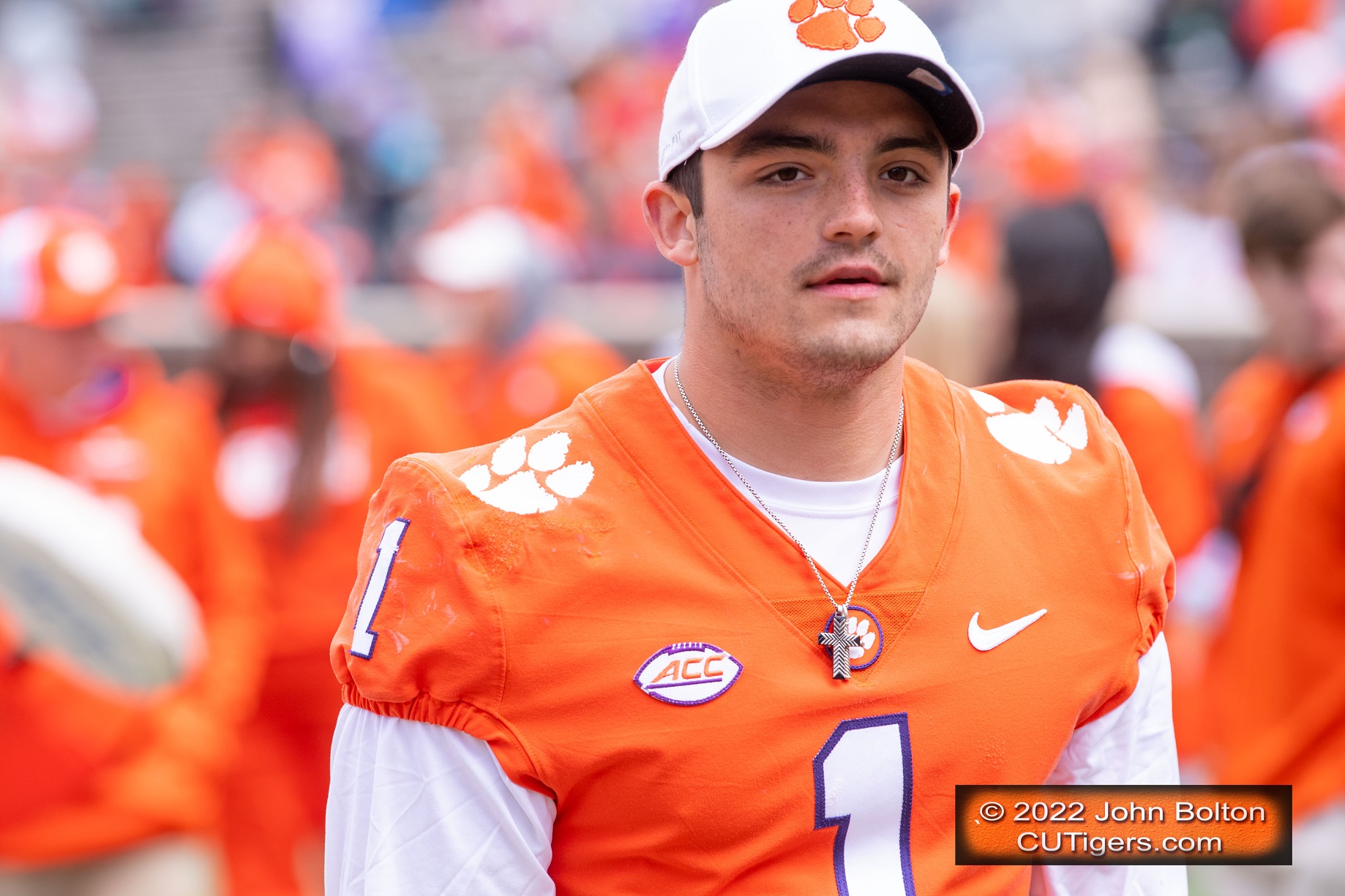 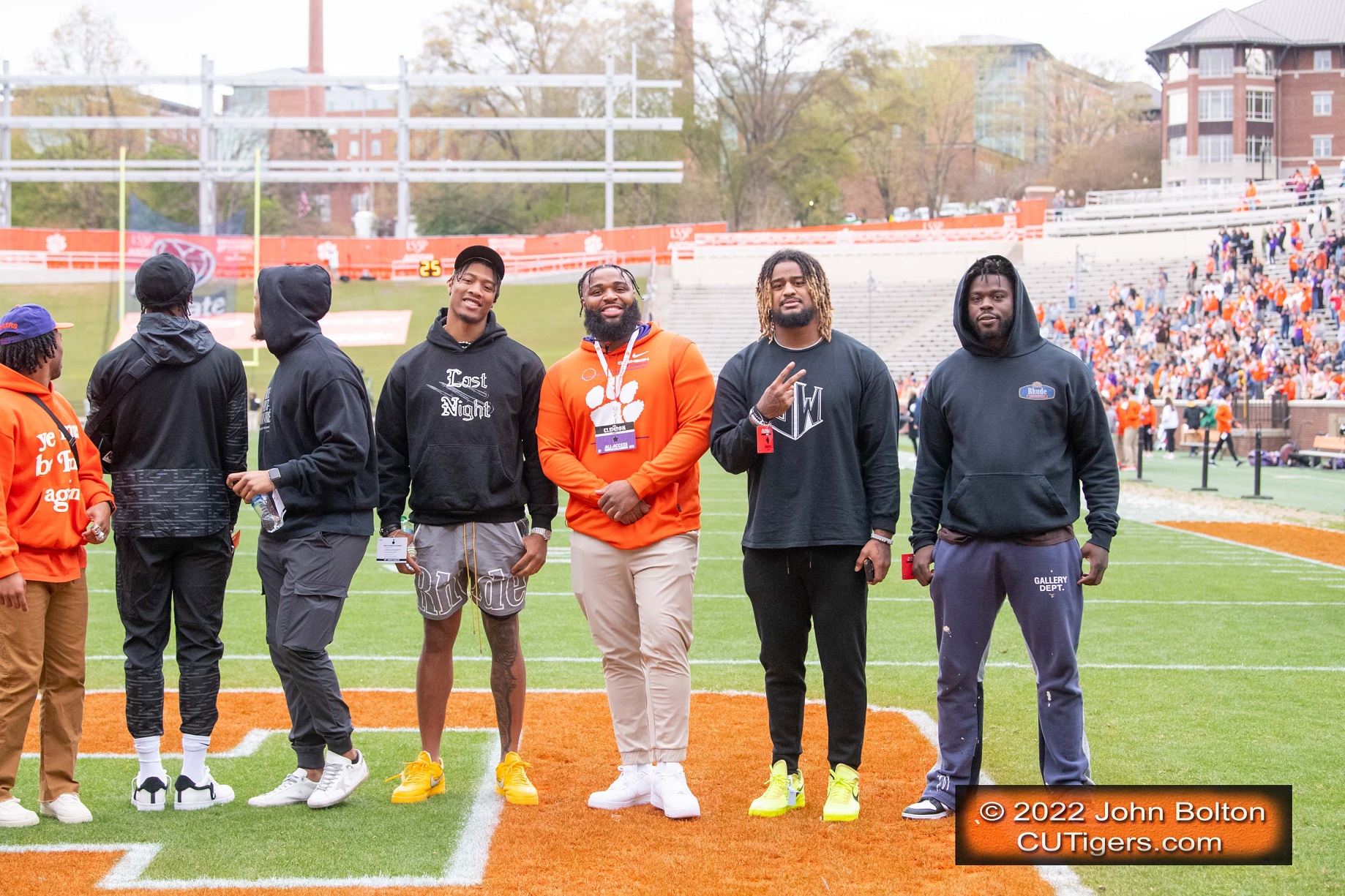 It was a great crowd on hand despite an unusually freezing and windy April day in Death Valley. It felt a little bizarre to see no fans on The Hill or in the West Zone. Death Valley is getting a face lift, in case you didn't know, and a giant new state-of-the-art video screen is being built above The Hill. As a result, the team did not run down The Hill prior to the game, which was also bizarre. I believe it's the first time that's been the case since the early 70's when Head Coach Hootie Ingram broke the tradition for a short time.
Post-game interviews are below. If you're still upset about the ACC Network ending its broadcast at halftime, click on the link below for play-by-play and more!
MORE CLEMSON FOOTBALL, BASEBALL AND SOFTBALL COVERAGE HERE