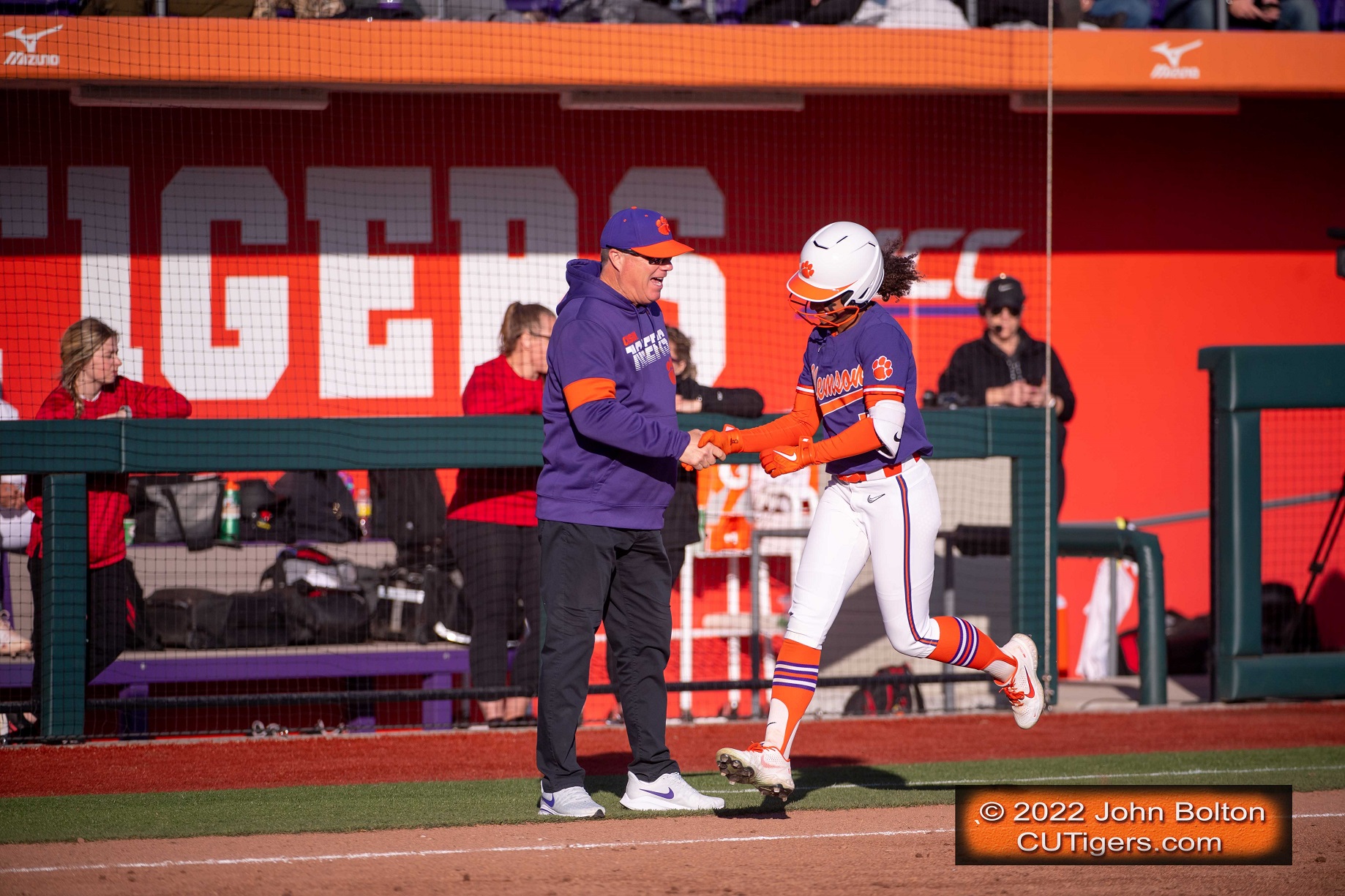 
NO.10 RPI CLEMSON SWEPT IN TIGHT SERIES AT NO.4 FSU

The Lady Tigers went to Tallahassee for their first-ever meeting with the Seminoles and having won 12 of their last 13, losing only to No.23 Notre Dame. It was an epic matchup of teams ranked in the top 10 of the RPI and last year's ACC regular season champion, Clemson, against the perennial ACC powerhouse and last year's national runner-up, FSU. It was also John Rittman against his former assistant from Stanford, Lonni Alameda, who is now the head coach of the Seminoles.
The Tigers should have won the first game on Thursday night. Freshman catcher Aby Vieira from California was outstanding, scoring the first run after a leadoff double in the 3rd and a 2-out single by Pereira. Then she hit a leadoff HR in the 5th to give the Tigers a 2-0 lead. However, an error by Taylor at 1st put the leadoff batter on to start bottom of the 5th and led to disaster. Cagle would have been out of the 5th inning 1-2-3 if not for the error. Instead, she gave up a 2-out single followed by a double and a HR to give the Seminoles a 4-2 lead. Cagle got a little redemption in the next inning with a solo HR to make it 4-3, and Logoleo tied the game 4-4 with a leadoff HR in the 7th. The Tigers had a golden opportunity to take a 6-4 lead with a hit or a 5-4 lead with a sac fly. They had runners at 2nd and 3rd with one out, but leadoff hitter Cammy Pereira and McKenzie Clark both struck out to strand them.
The Tigers fought their way back to a tie, but relief pitcher Regan Spencer hit the Noles' leadoff batter in the bottom of the 7th, and a 2-out walk-off single won the game for the Noles 5-4. All 5 of the Noles' runs came with 2 outs after the Tigers gave them an extra out with an error or a hit batter. You just can't afford to do that on the road against a top-5 team, and it cost the Tigers the game. The Tigers hit 3 HR's, but they were all solo shots, and that would be a theme on Saturday as well.
In game 2 on Saturday, the Tigers once again took an early lead as McKenzie Clark must have eaten her Wheaties for breakfast. She was ice-cold on Friday, going 0-4 with 2 K's, including a strikeout with the go-ahead run on 3rd and another run on 2nd to end the 7th inning. Her bat woke up on Saturday, hitting homers in her first 3 at bats of the game! Her first gave the Tigers a 1-0 lead in the 1st, but the Seminoles would answer with 2 runs in the bottom half after Thompson walked the leadoff batter and gave up a HR. Clark's next at bat was a 2-run HR in the 3rd to give the Tigers a 3-2 lead. It was their only multi-run HR of the series. Clark's next at bat was another solo HR in the 5th that increased the Tigers' lead to 4-2. However, just 6 outs away from the win, Thompson gave up a leadoff single in the 6th. An error by Logoleo and bunt single gave the Seminoles bases loaded with no outs. Rittman brought Cagle in to relieve Thompson, and it backfired. An error by Keller at 1st gave the Noles 2 runs to tie the game. Then Cagle hit a batter and gave up a sac fly to give the Noles a 5-4 lead. Cagle gave up a single for another run, and Spencer came in to relieve her. Spencer gave up a sac fly to give the Seminoles a 7-4 lead before finally ending the disastrous inning. The Tigers wouldn't go quietly, however. 9-hitter Oda led off with a single and Pereira singled to make it 7-5. Guimbarda drove in another run to make it 7-6, but Russ struck out to end the game with the tying run on 3rd and the go-ahead run on 2nd. The Tigers had 6 HR's in the first 2 games of the series, but 5 of them were solo shots. And defensively, they simply made too many mistakes. Despite those two factors combined, the Tigers only lost each of the first two games by one run against the No.4 team on the road.
I have to believe that by game 3 on Saturday, the Tigers were spent emotionally after two hard-fought one-run losses on the road. They never had a chance in this one. After taking a 1-0 lead in the 2nd, the Seminoles broke the game open with 4 runs off of Spencer and McCubbin in the 3rd. The Tigers managed just 3 hits in the 6-0 loss.
The Tigers will not repeat as ACC regular season champs, but I think this series proved that they are capable of winning the ACC Tournament in Pittsburgh. If they can do that, they will host a Regional and might even have a shot at hosting a Super! The close the regular season with a big home series against Georgia Tech next weekend.
MORE CLEMSON BASEBALL, SOFTBALL AND FOOTBALL COVERAGE HERE