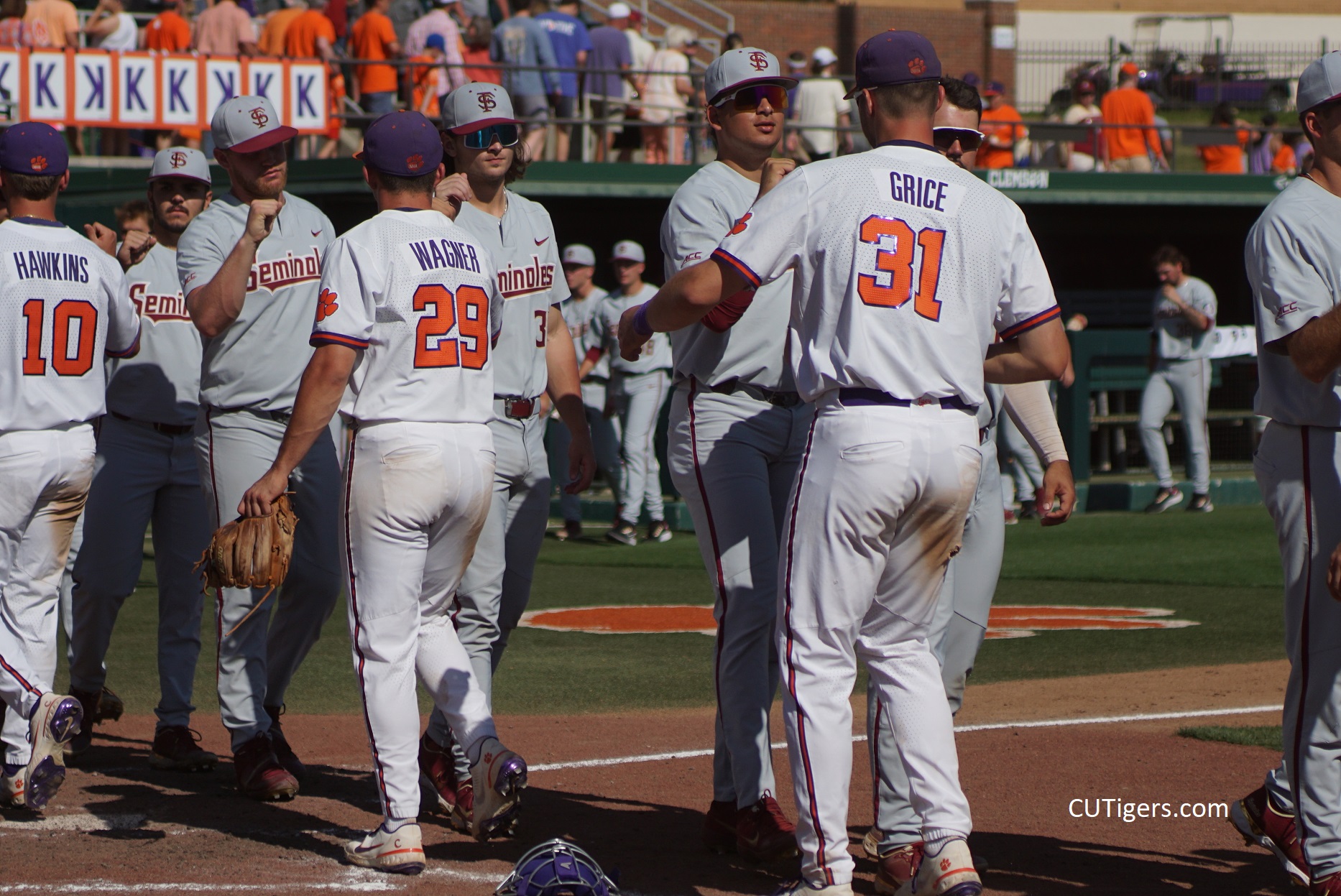 CLEMSON, SC - What a series! It felt like the post-season at Doug Kingsmore this weekend, with 3 pressure-packed, hotly contested games. The Tigers lost 4-3 on Saturday to even the series despite Max Wagner's 2 HR's for the second straight day, so Sunday's game would be a huge rubber match as the Tigers hoped to win their second straight ACC series against a ranked team. 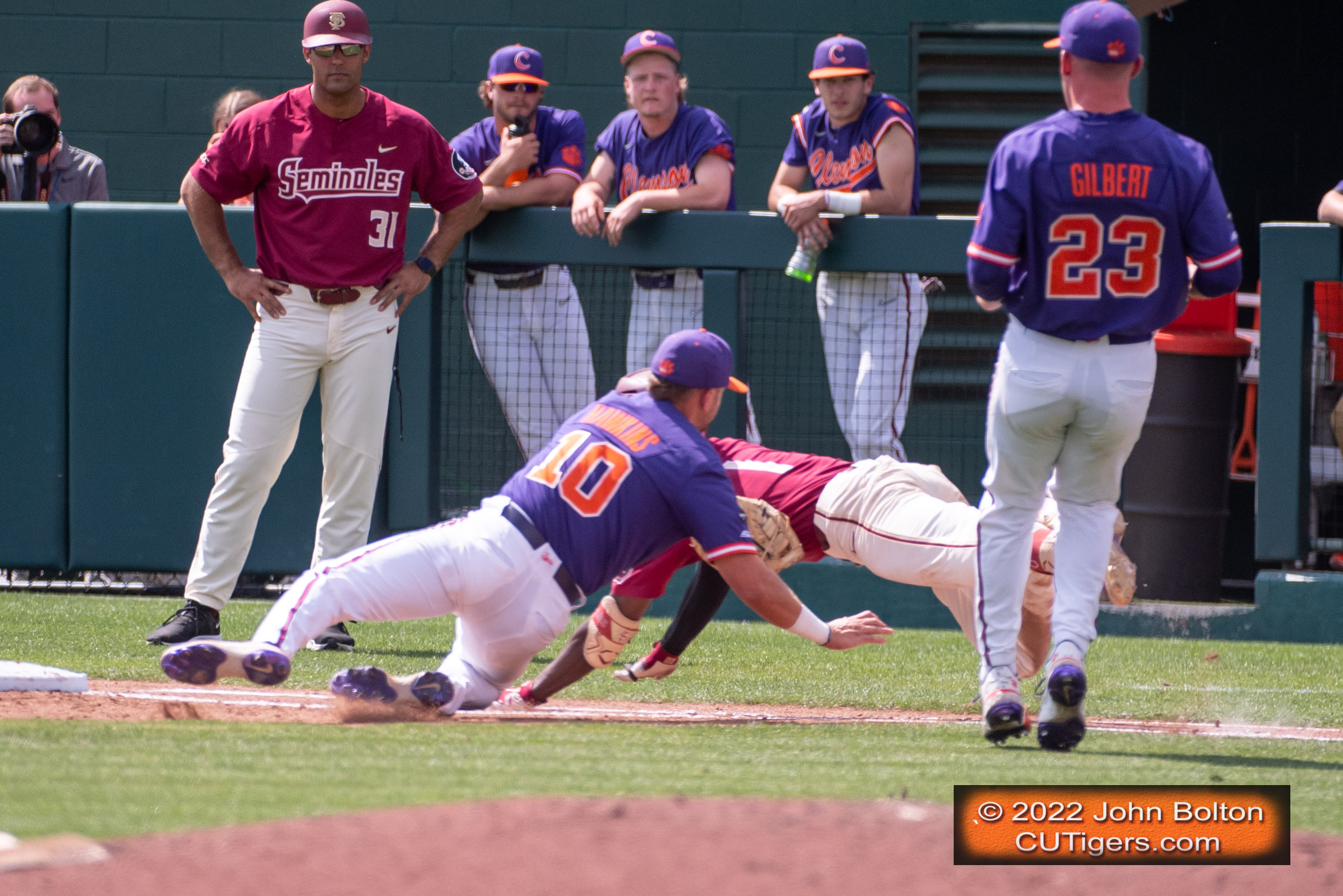 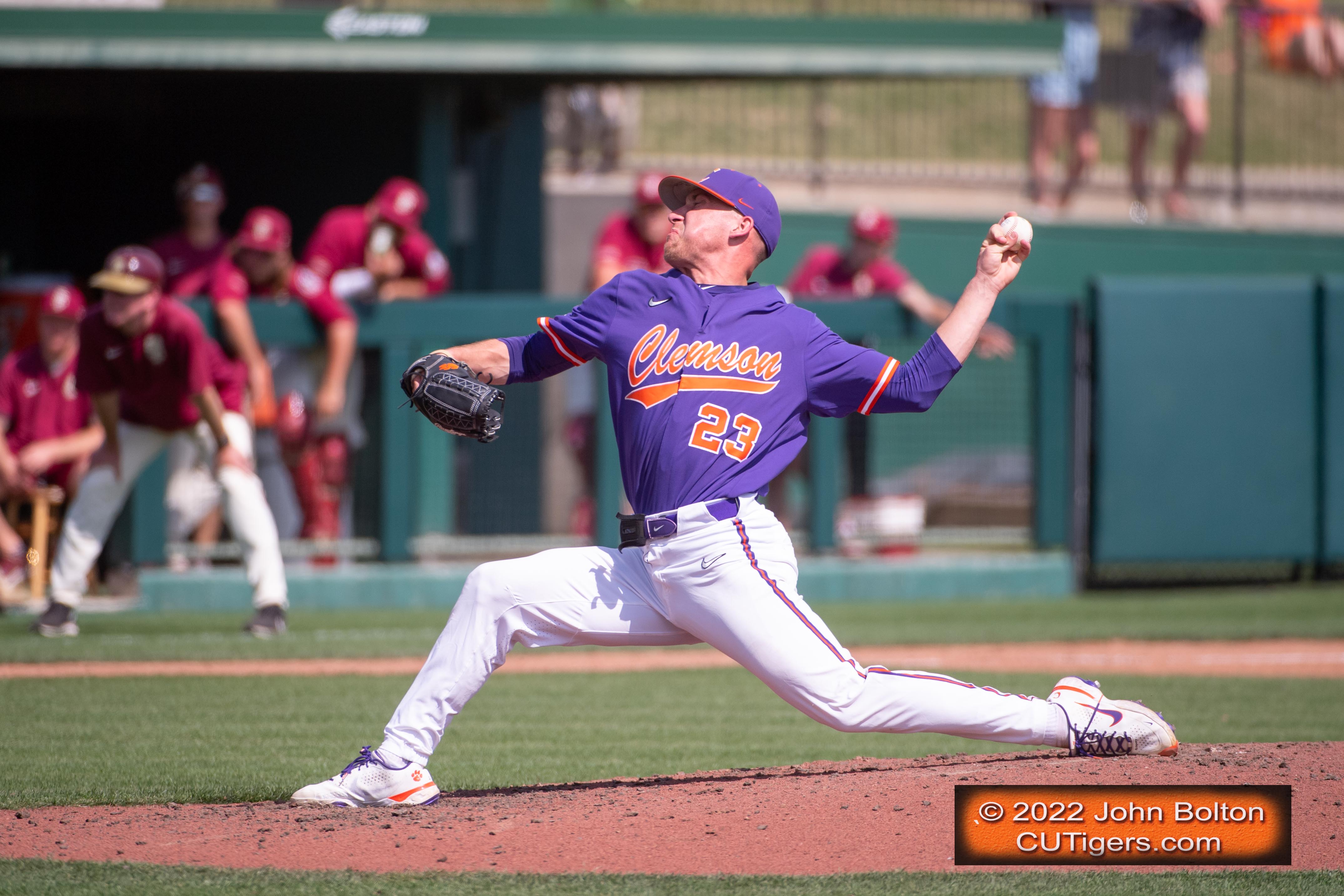 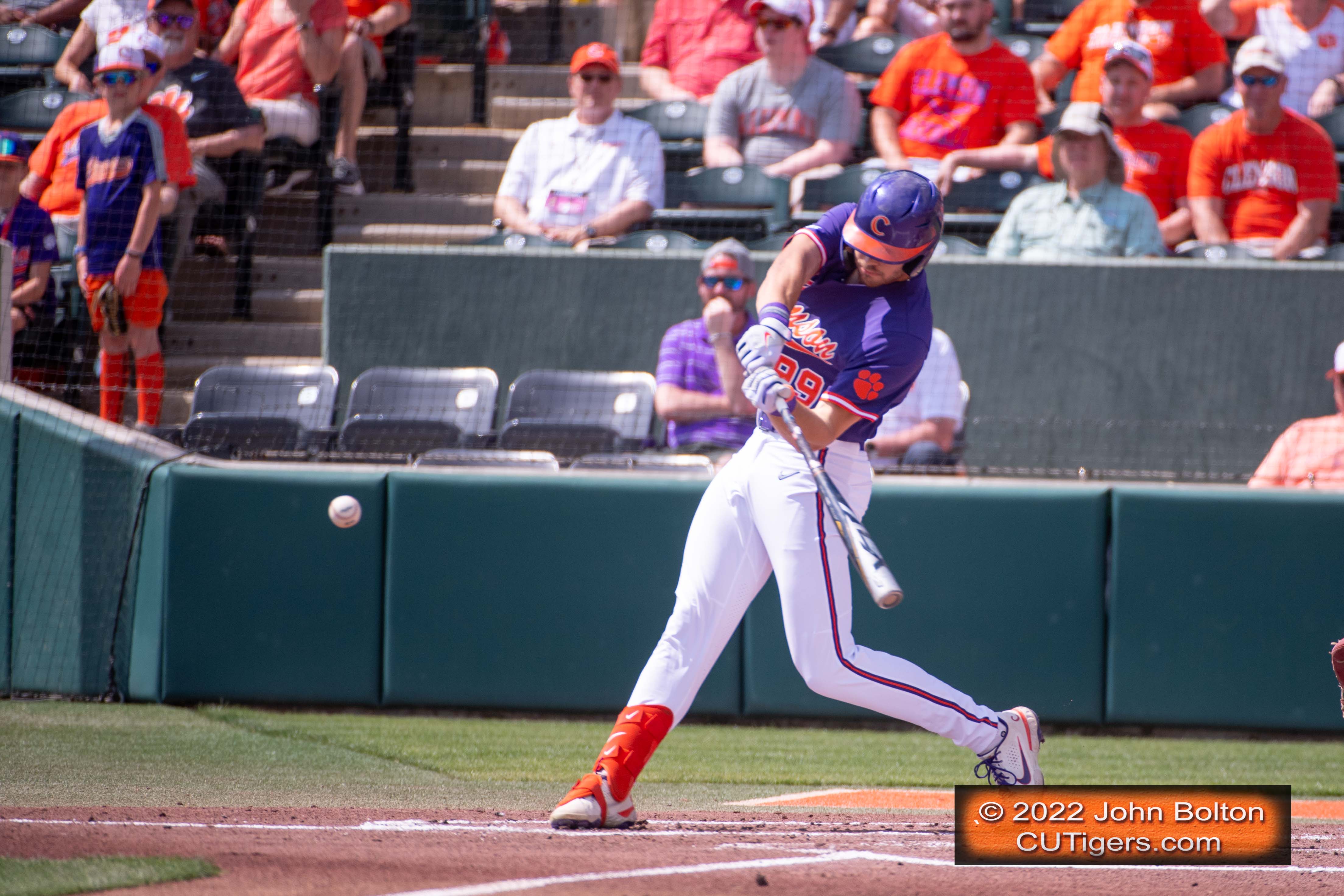 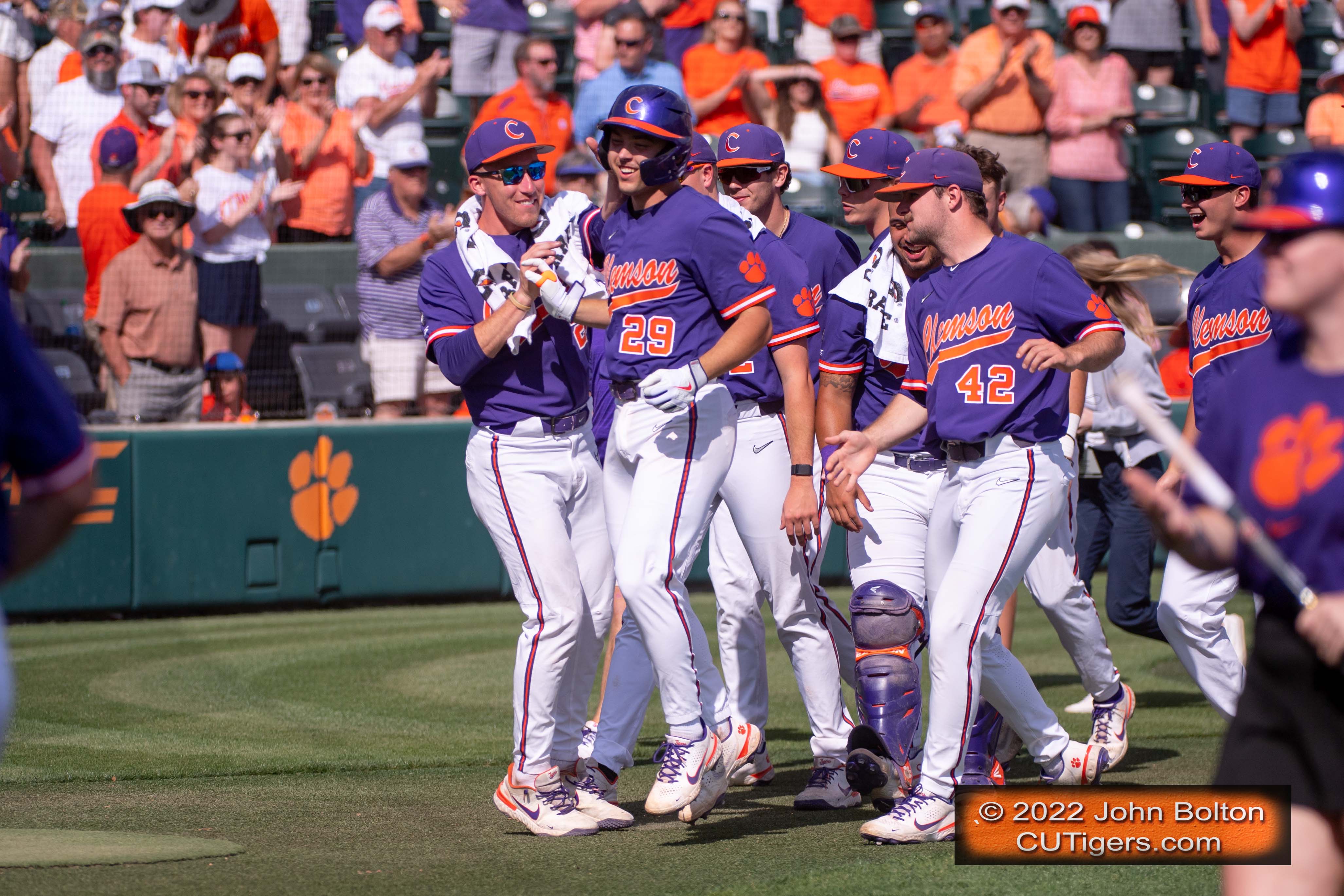 Like Gilbert on Saturday, freshman Billy Barlow made his first career weekend start on Sunday. He had been the Tigers' regular midweek starter all season, including both wins over No.10 UGA. Barlow got off to a shaky start, allowing 3 runs in the 1st. He would have been out of the inning if not for a walk, but a 2-out double, an error by Blackwell and a single gave the Seminoles a 3 spot before Barlow got a strikeout to end the inning.
Two or three weeks ago, the Tigers might have faded away after the early 3-run deficit against a top-10 team. However, this is a different team right now. Red-hot Max Wagner led off the 2nd with a double, and after a walk by Corbitt, Grice hit a 3-run homer to tie the game. He has doubled his season HR total in the last week, from 4 to 8, and this one was a huge momentum swing. 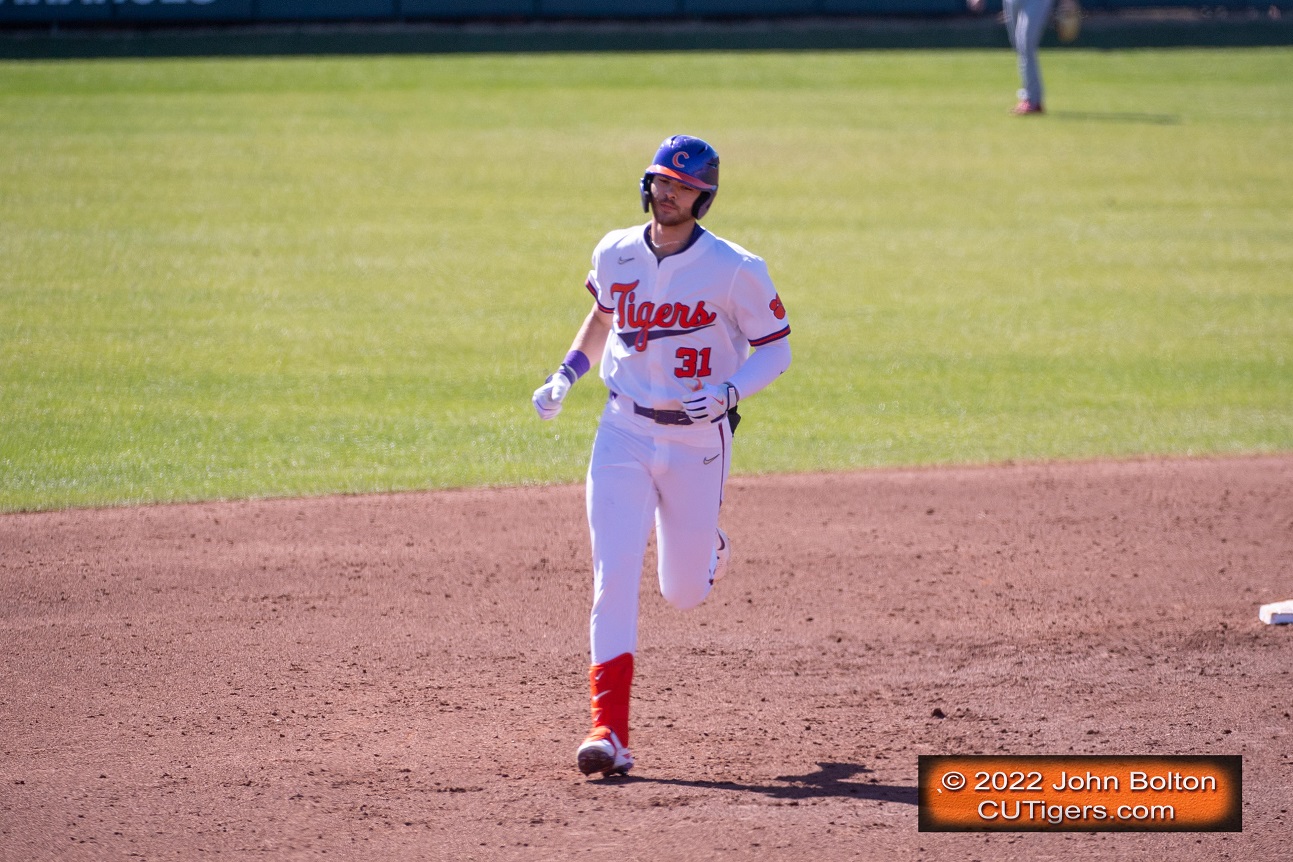 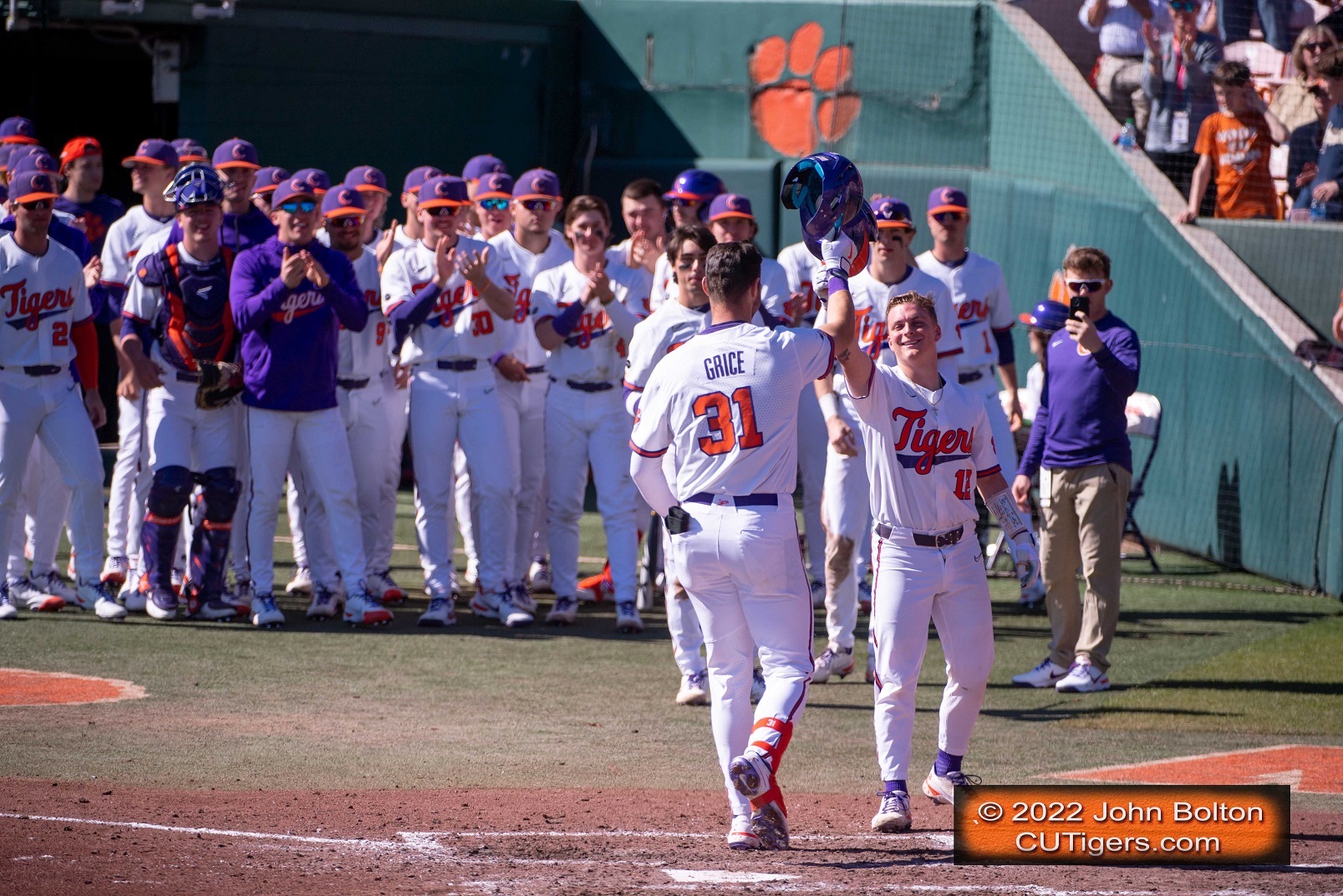 Ironically, the game remained tied until the 6th inning when Monte decided to replace Dill with Grice on the mound to start the inning. Grice had only pitched 5.2 innings this season, but he went 1.2 hitless innings against ETSU last week. He would not last long this time, however. He made an error to start the inning, gave up a walk on full count and a 2-run double to give the Seminoles a 5-3 lead. Monte quickly brought in Gordon from the pen, and he got out of the inning with a couple strikeouts.
The Tigers answered right back in the bottom half, with a leadoff double by Wright, a wild pitch and an error to make it 5-4. Wright doubled again in the next inning, and this time it scored a run to tie the game. Hawkins hasn't had a hit in 4 games and was 0-3 on Sunday, but he started the inning with an important full-count walk after fighting off a few pitches for fouls. He then scored the tying run on Wright's double. After Wagner was intentionally walked, the Tigers had a golden opportunity with bases loaded and 2 outs, but Corbitt grounded out to strand them and keep the game tied 5-5.
The missed opportunity might have haunted the Tigers, but instead, they put it behind them and Grice reached base after a strikeout to lead off the 8th and start a game-winning rally. Brewer, of all people, singled to keep the no-out rally going. After going nearly a month without a hit, he came up with a huge pinch-hit single on Friday night to lead off the 8th, which led to Wagner's game-winning grand slam. Brewer now had another big hit in the 8th, advancing the go-ahead run Grice to 3rd. When Brewer stole 2nd, an errant throw went into the outfield, and Grice scored to give the Tigers a 6-5 lead. Hawkins reached on an error, moving Brewer to 3rd. Monte tried for a safety squeeze, but Fairey was unable to get the bunt down. He had tried for a sac bunt earlier in the game and popped up to the pitcher. This time, it didn't hurt the Tigers because Fairey hit a sacrifice grounder for a big insurance run. Rich pinch ran for Fairey, and that would prove to be a great move by Monte because he stole 2nd and advance to 3rd on another errant throw. With 2 outs, Ingle would reach base on yet another error by the Noles, and Rich scored to make it 8-5.
Closer Ryan Ammons came in for the 9th and gave up a 2-out walk but fittingly got a strikeout to end the series. It was the 11th K of the game for the Tigers' pitching staff, which consisted of 7 pitchers on Sunday.
Wagner's 5-game HR streak ended after hitting 2 HR's in each of the first two games of the series, but I'm sure he'd rather have the series win! Incidentally, Wagner is now 4th in the Power Five and 7th nationally with 17 HR's, just 4 less than the national leader.
It was an ugly game, with 10 combined errors, but the red-hot Tigers found a way to win. They have won 7 of their last 9 games, including 5 ranked and 3 top-10 teams! Their only losses in the 9-game stretch were 4-3 to No.9 FSU and extra innings at No.23 Wake. Their brutal schedule doesn't get any easier, with two midweek games this week, including No.22 Wofford on Wednesday, and ACC series at Louisville, at UVA and at home with Georgia Tech, but if they can put together a couple weeks like the week they just had, they will shoot up the RPI rankings in a hurry and could even give themselves a chance to host a Regional! They have the toughest schedule in the nation in my opinion, but they are getting hot at the right time.
My post-game interviews with Monte, Grice and Wright are below!
MORE CLEMSON BASEBALL, SOFTBALL AND FOOTBALL COVERAGE HERE