CLEMSON, SC - Wow, I guess it's feast or famine with this team. I said weeks ago when the Tigers were mired in a seemingly bottomless quagmire that if Grice and Brewer could start hitting like we expected them to this season, the Tigers could outscore just about anyone. Sure enough, they are hitting now, and this offense is absolutely humming.
After winning a huge pressure-packed ACC series against No.9 FSU, the Tigers had the difficult challenge of two midweek games before traveling to Louisville for a very tough ACC road series. They hosted PC on Tuesday, and the offense picked up right where it left off in their 8-5 win over the Noles on Sunday. PC actually struck first with a 2-out rally on Ricky Williams, putting together 3 straight hits with 2 outs to take a 2-0 lead in the 1st. However, the Tigers responded quickly and never looked back. They scored 4 runs in the 2nd, 5 in the 3rd, 2 in the 5th and one in the 7th, tallying 12 unanswered runs to make it 12-2. Tallent gave up a leadoff HR in the 8th, but the game was well over by then. Grice was 3-5 and homered for the 2nd straight game. He has more than doubled his season HR total in the last 9 days with 5 homers, giving him 9 on the season after going about 5 weeks without one. Corbitt was 2-4 and also homered. Perhaps the biggest story of the game, though, was Dylan Brewer. He was 3-4 and reached base 4 times with 2 doubles, a single, a walk and a RBI. As I wrote before, he went almost a month without a hit until Monte had the gut instinct to pinch hit him to start the 8th against FSU on Friday night. He singled and started a rally that loaded the bases and led to Wagner's game-winning grand slam. Since that fateful at bat on Friday, Brewer has 5 hits!
Williams really settled in after that 2-out rally in the 1st. He gave up just 2 more hits in 6.2 innings pitched. Edmondson made his second appearance back since his month-long injury and struck out the side in the 9th. 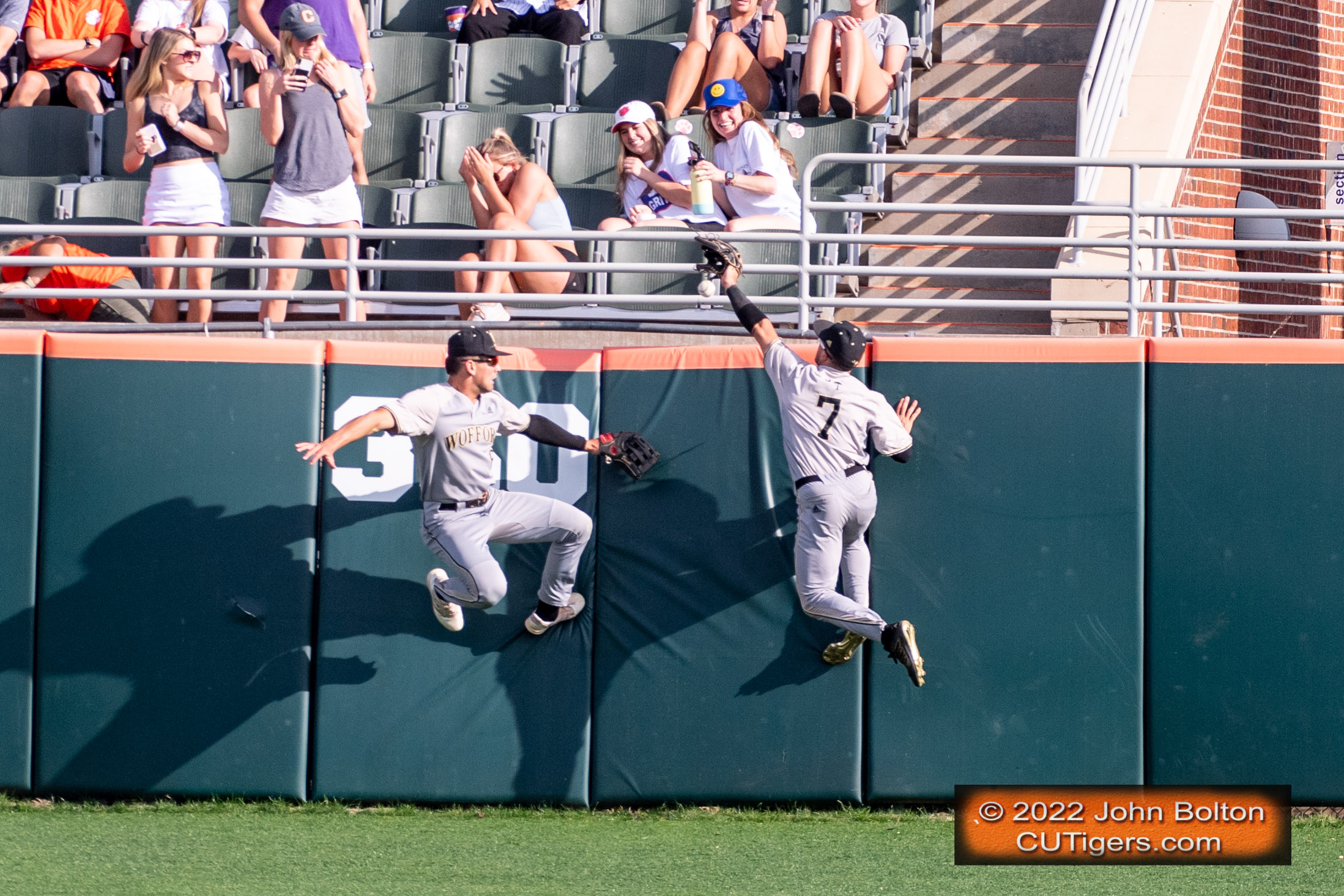 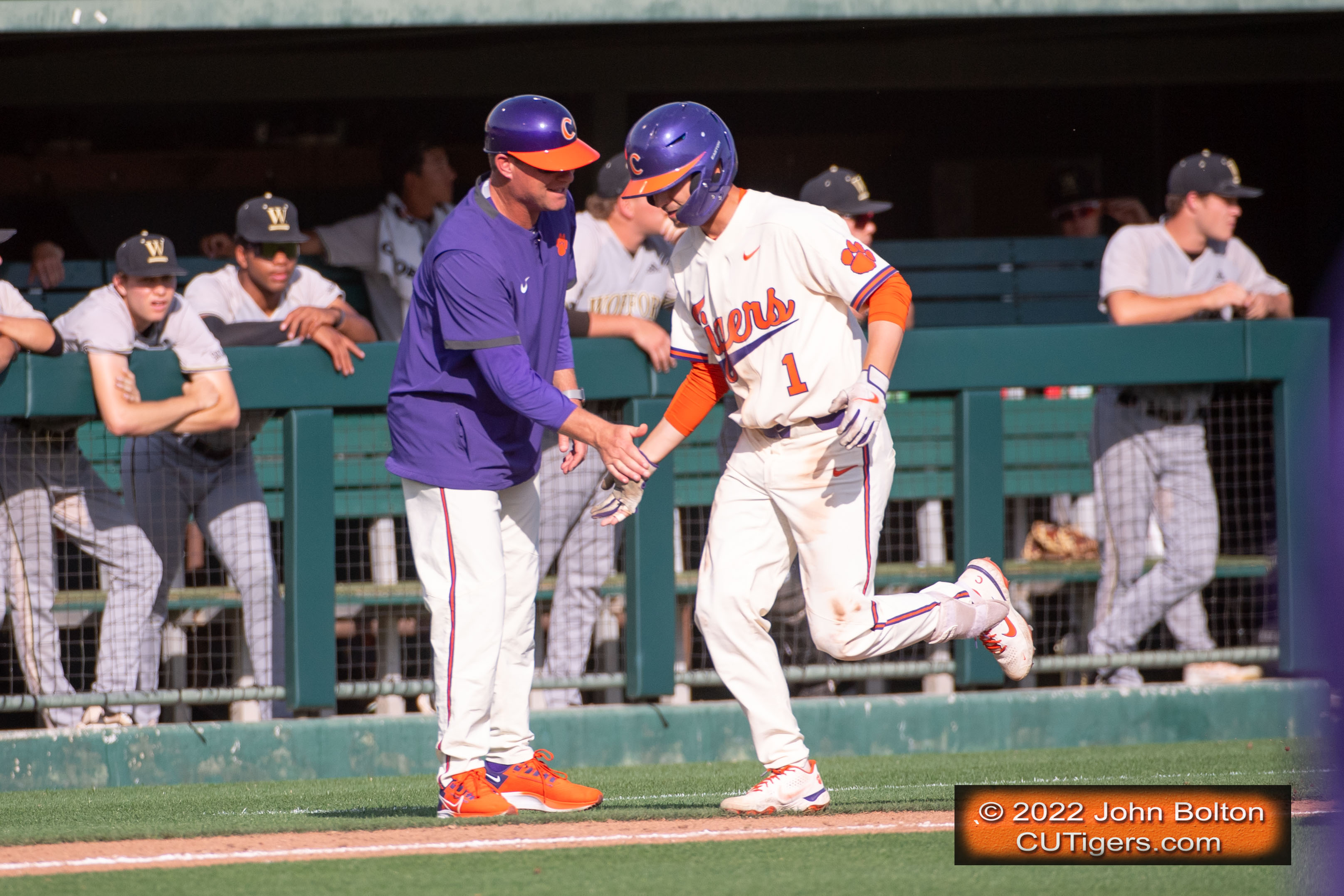 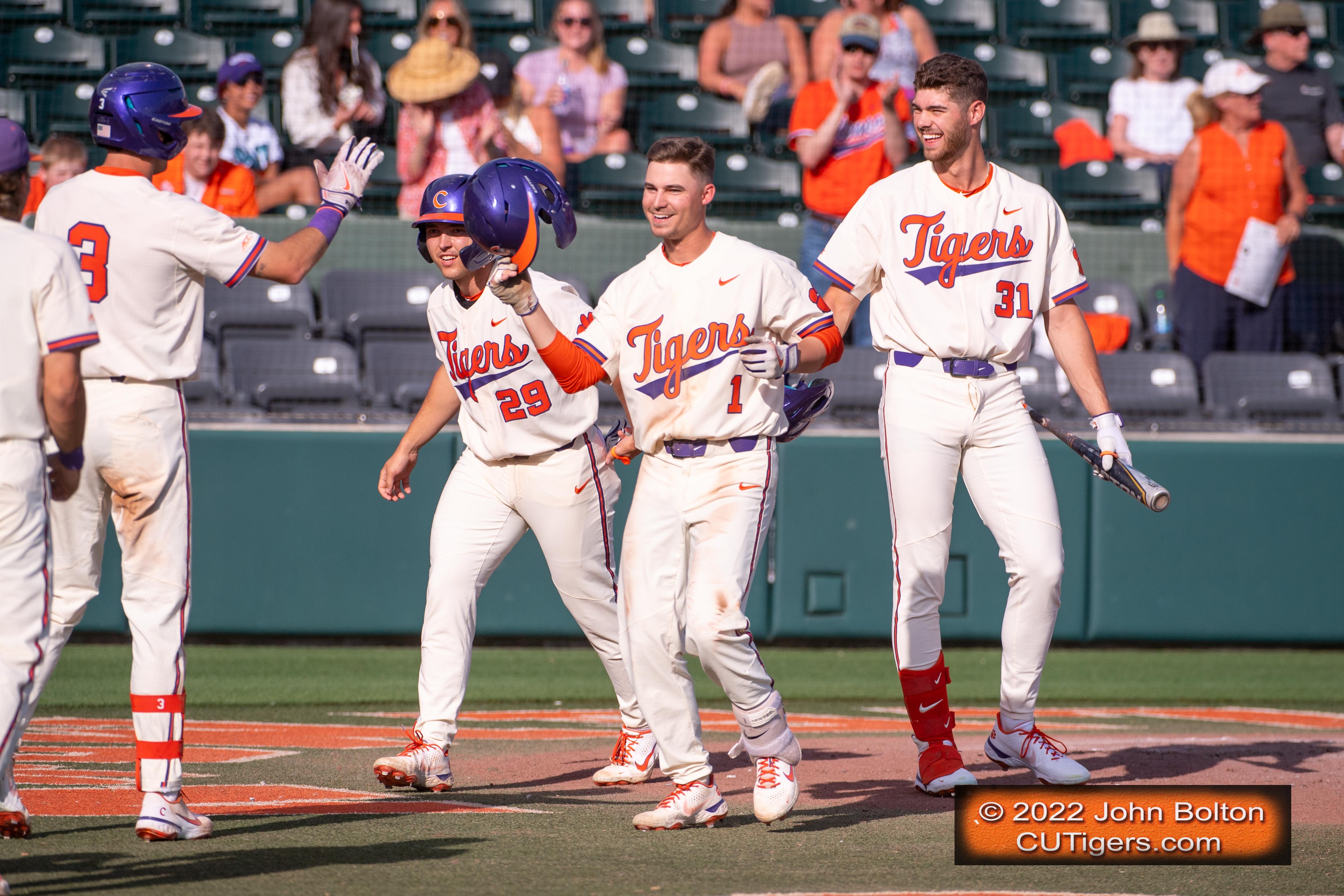 Wofford came to town with a rare ranking, so the Tigers were expecting a tough game, but they made even shorter work of the Terriers. The Tigers jumped out to a 2-0 lead in the 1st on a 2-out triple by Corbitt. Wofford answered in the 2nd when former weekend starter Nick Clayton gave up a leadoff walk followed by a single and a safety squeeze. Clayton proceeded to give up a double and a single with 2 outs to score 2 more runs and put Wofford ahead 3-2. After that, it was all Tigers. They scored 3 runs in the bottom half, including a 2-run HR by Ingle, to retake the lead 5-3 and went on to score 11 more runs unanswered! 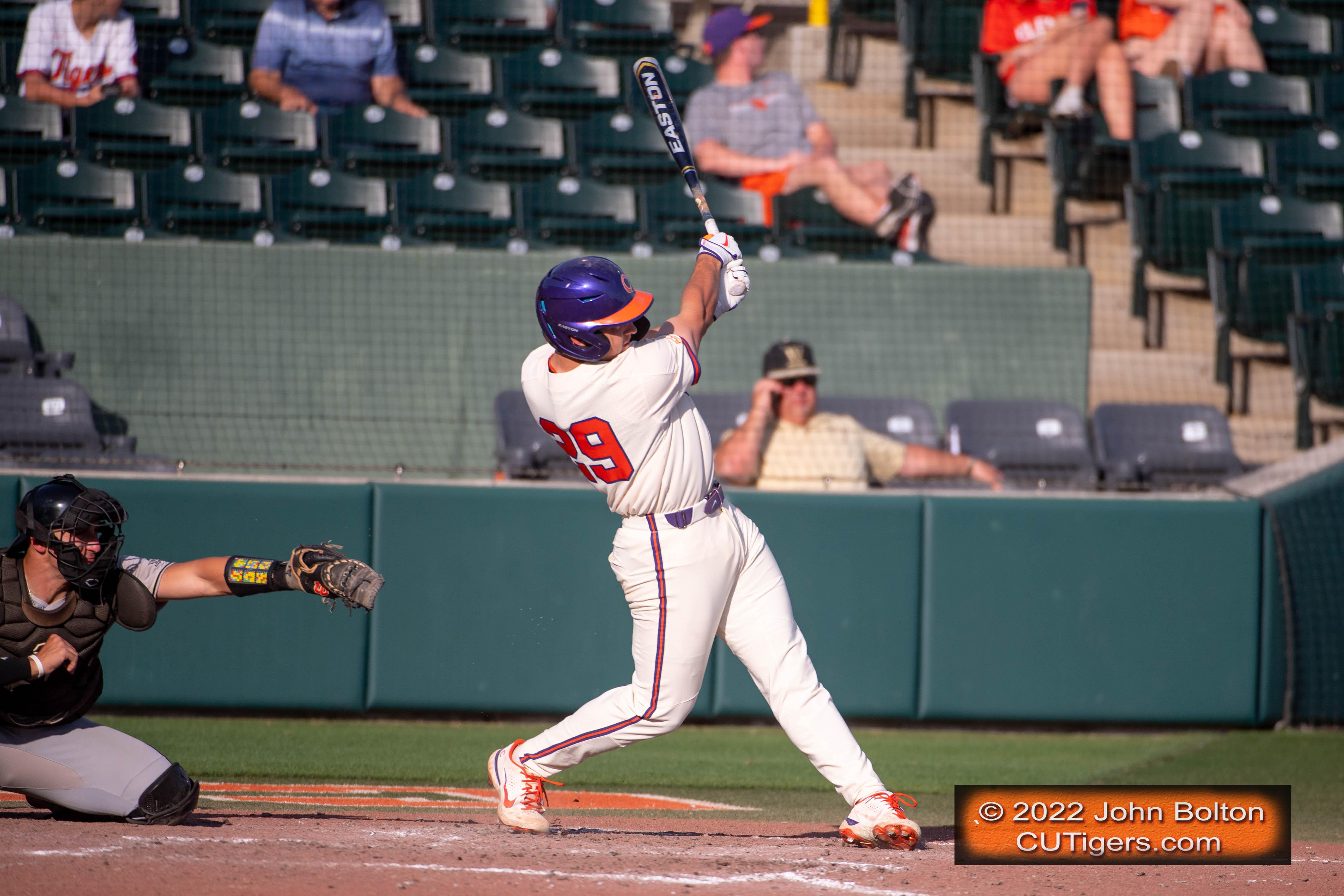 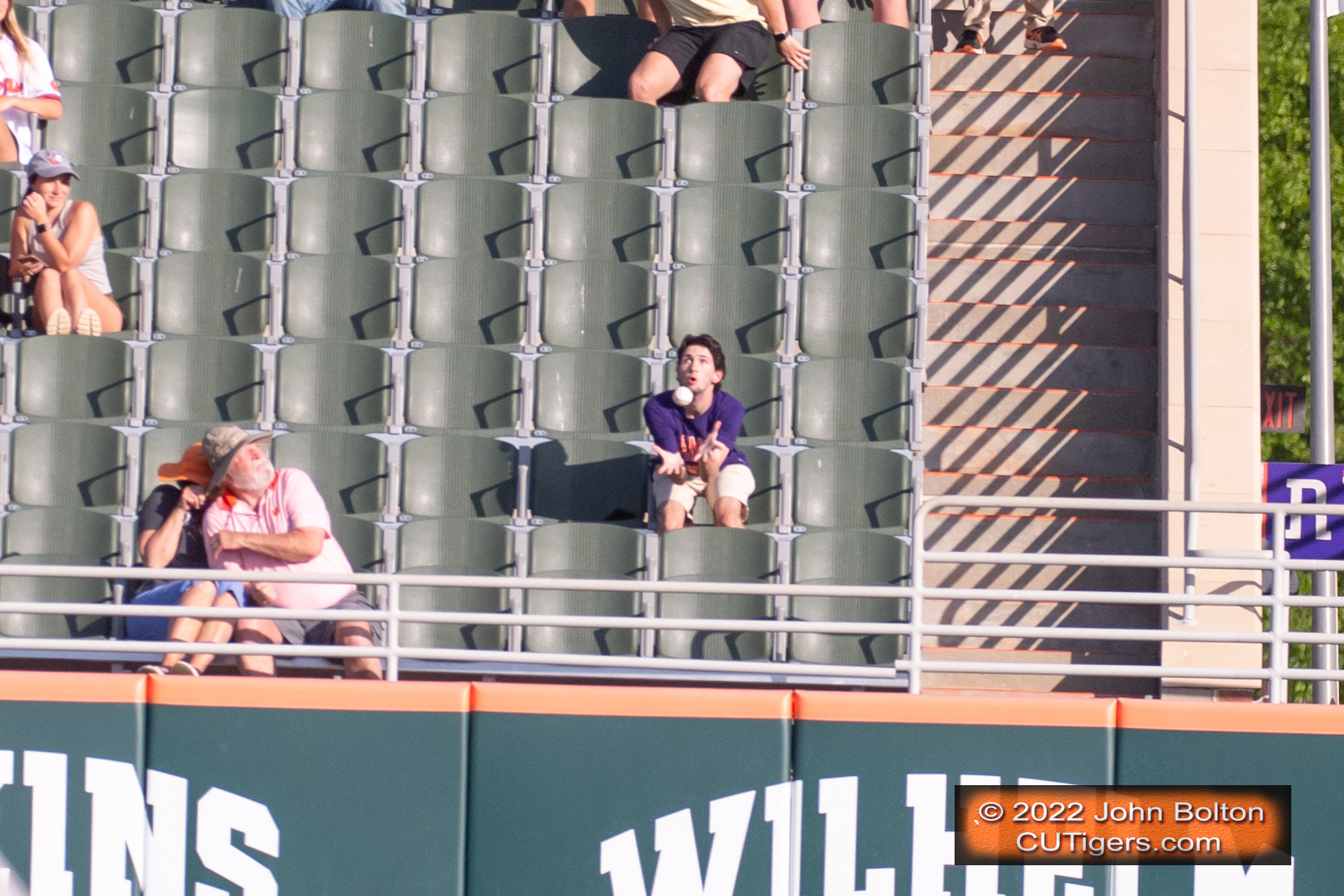 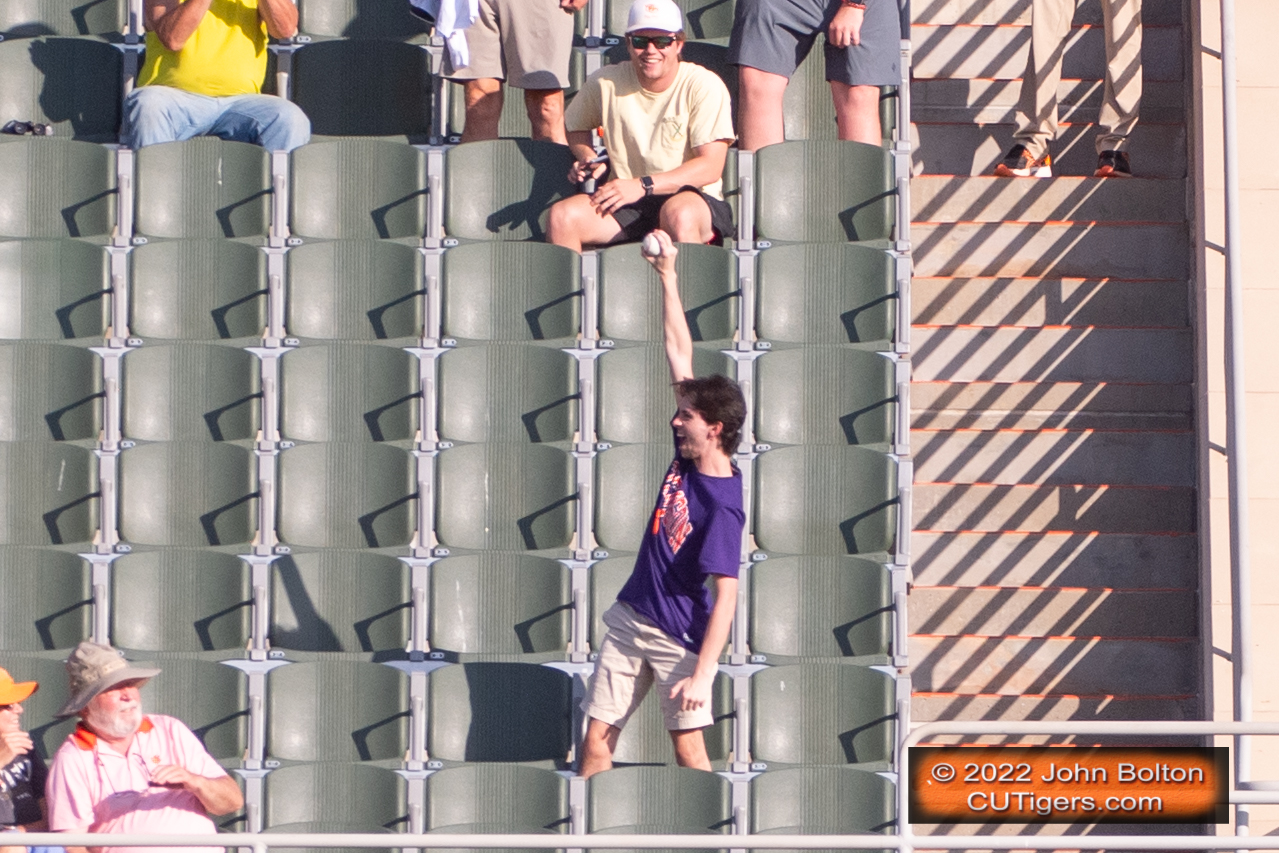 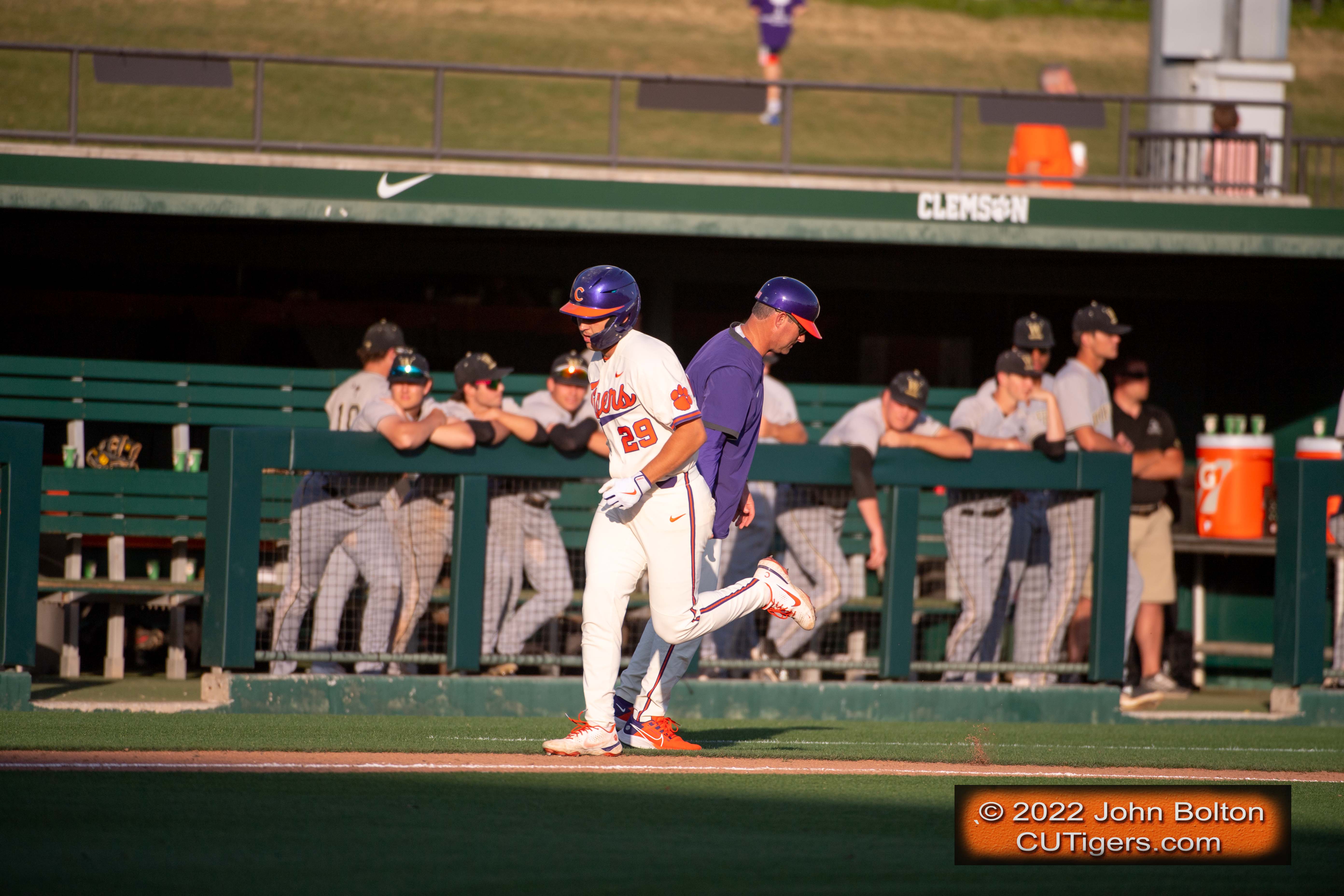 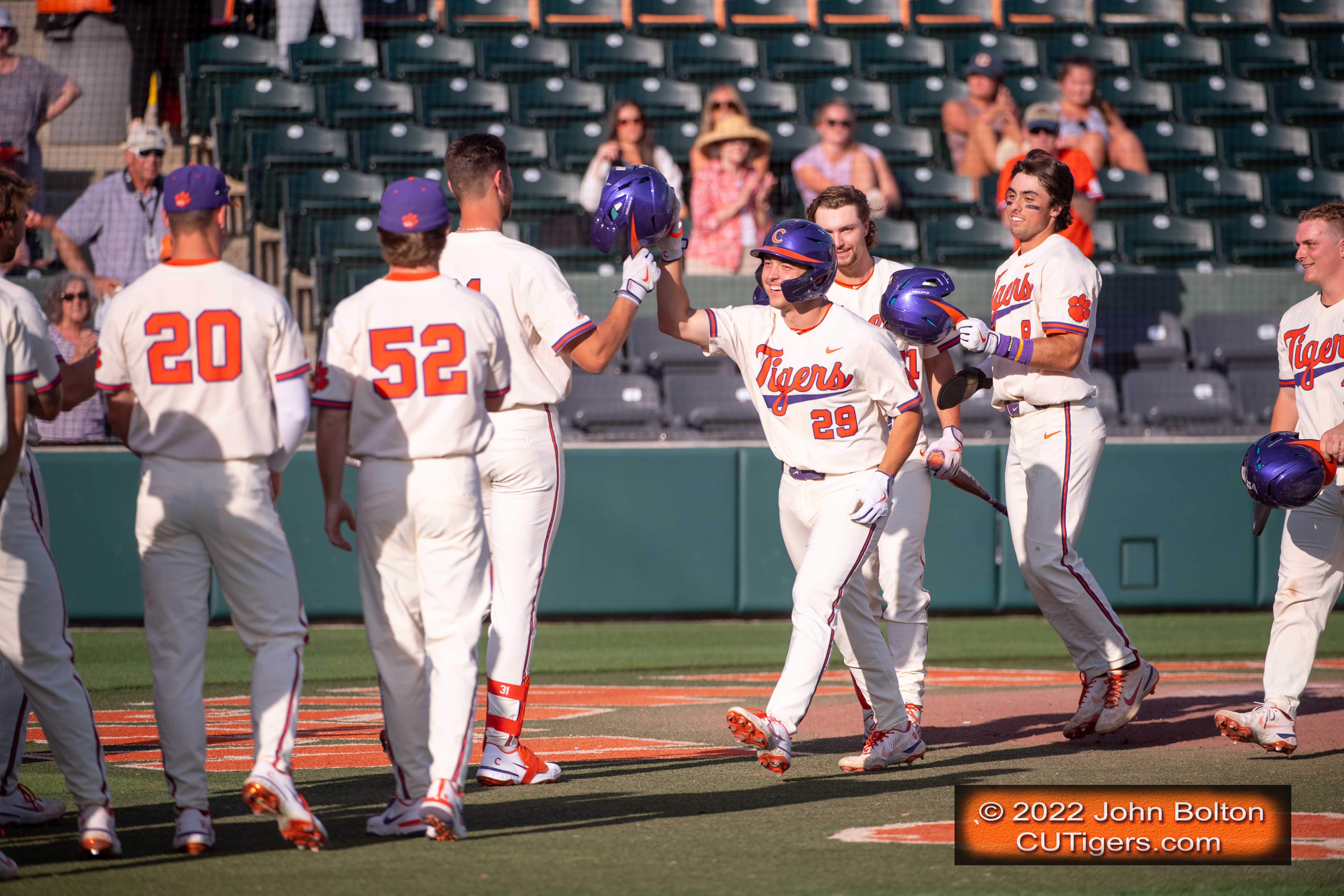 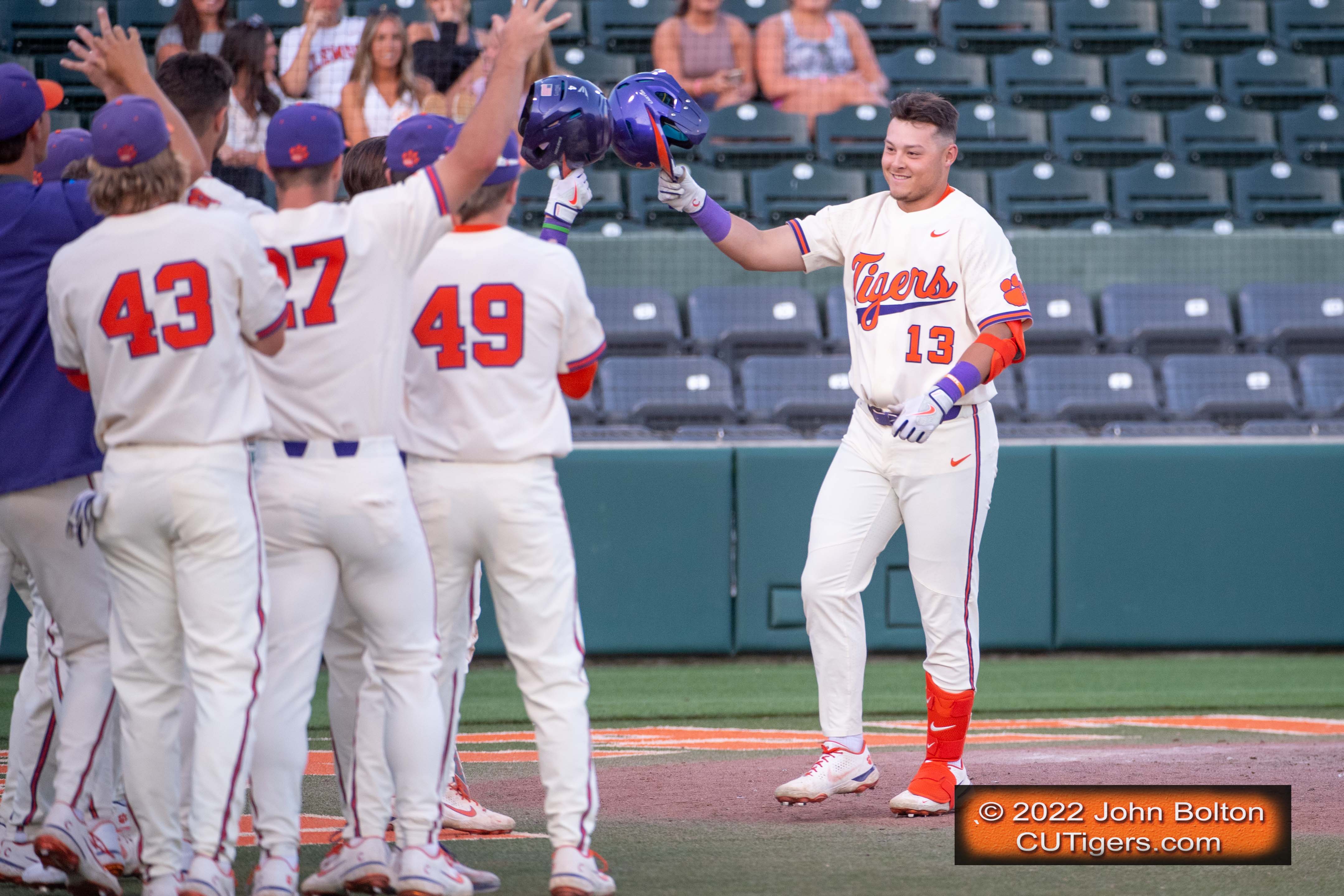 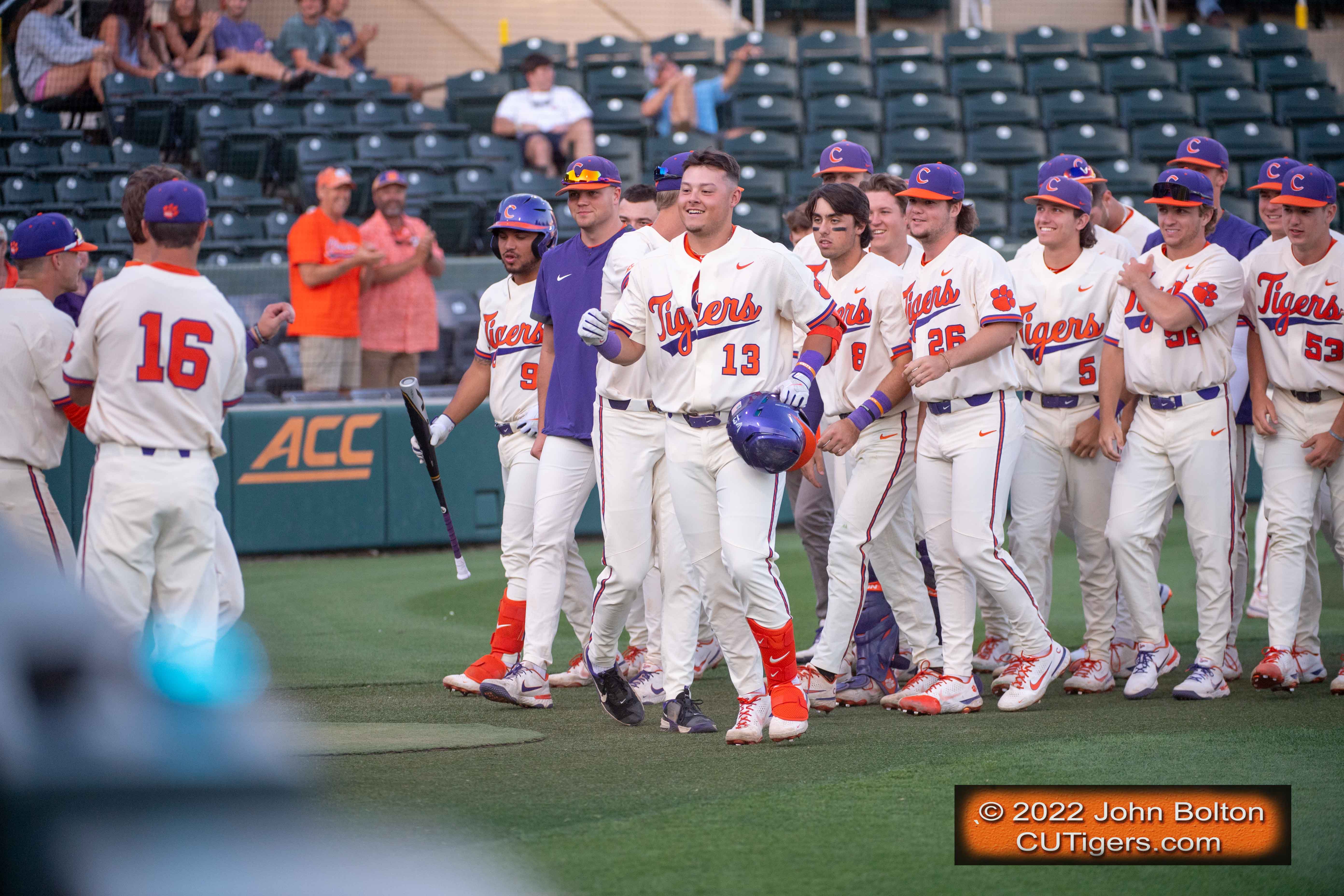 Max Wagner went 3-5 and hit 2 HR's for the 3rd time in 5 games and the 4th time since April 10. His 19 HR's ranks 4th nationally, just 2 HR's behind the leaders, and he is astonishingly averaging a HR every 7.5 at bats. The Tigers came into the game 14th in Power Five HR's and added 5 more along with 17 hits. Now they are 10th in P5 HR's. They scored in 7 of the 8 innings in which they batted. Corbitt left the game early after accomplishing the two hardest components of the cycle: a triple and a HR. He was 2-3 with 4 RBI's. Ironically, Brock came in for him and checked off the other two components with a double and a single. So the 5 spot in the order batted for the cycle. Freshman David Lewis hit his 2nd career HR. If there was a negative, it was that Grice and Brewer backslid, combining 0-8, although each walked and Brewer scored twice. Hawkins was just 1-5 but at least he's hit in consecutive games after going 4 straight games without a hit. 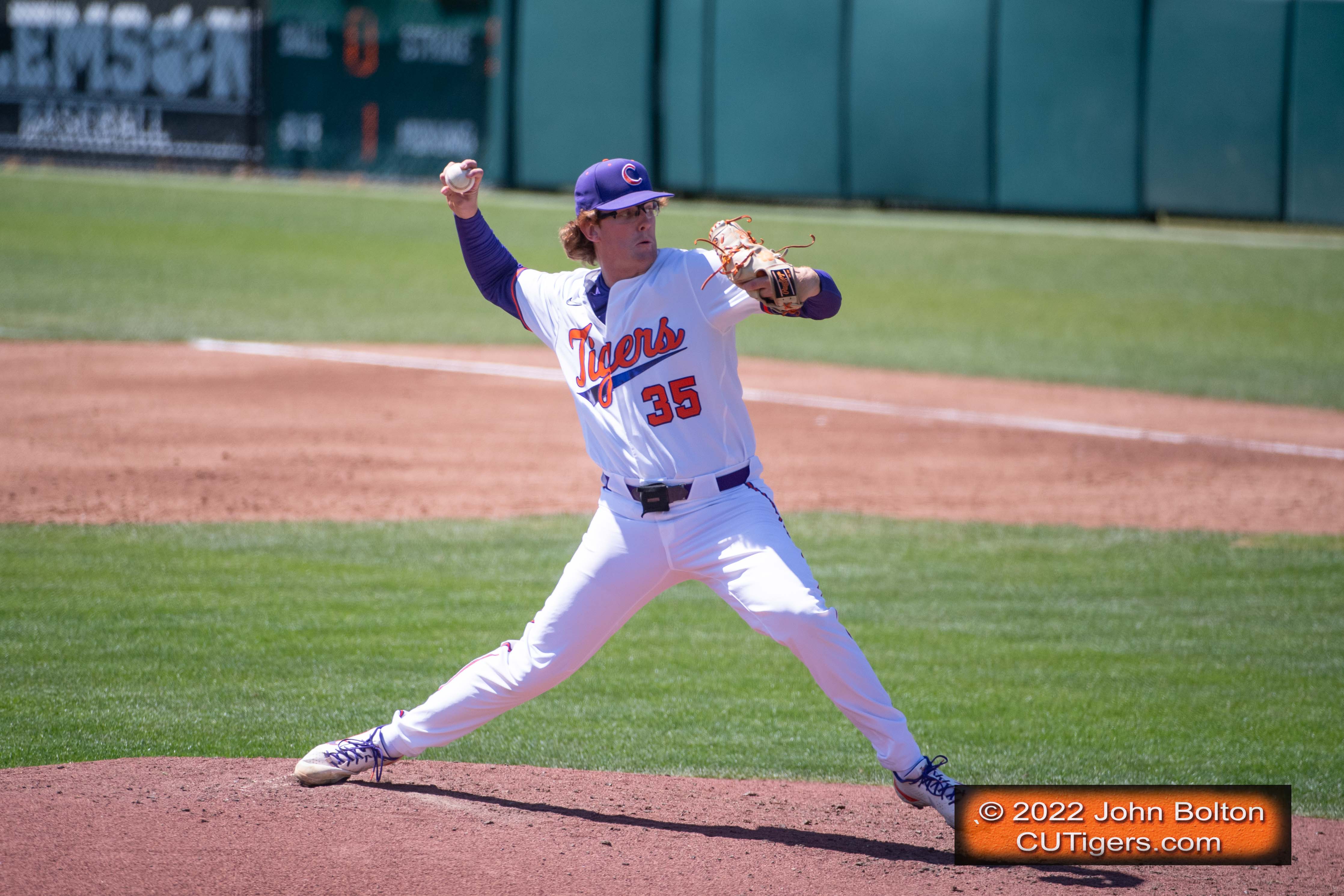 Dill picked up his first career win out of the pen with a couple solid innings of work. The Tigers used 6 pitchers, including Nick Hoffmann, so two former weekend starters pitched on Wednesday.
Don't look now, but the Tigers may be the hottest team in America right now. They have won 9 of their last 11, including 6 ranked and 3 top-10 teams. Their only 2 losses in the last 11 were 4-3 to No.9 FSU (their only one-run loss of the season) and extra innings at No.23 Wake. So they are as close as you can get to having won 11 straight! I said before the game that Wofford had no business being ranked ahead of the Tigers with just 4 more runs, and the Tigers proved me right by slaughtering the Terriers.
The weekend cannot get here soon enough with the way the Tigers' offense is humming. Louisville is 22-5 at home, so the Tigers needed to keep their momentum going. Hopefully they will win at least 2 of 3 for their 3rd straight ACC series win!
MORE CLEMSON BASEBALL, SOFTBALL AND FOOTBALL COVERAGE HERE