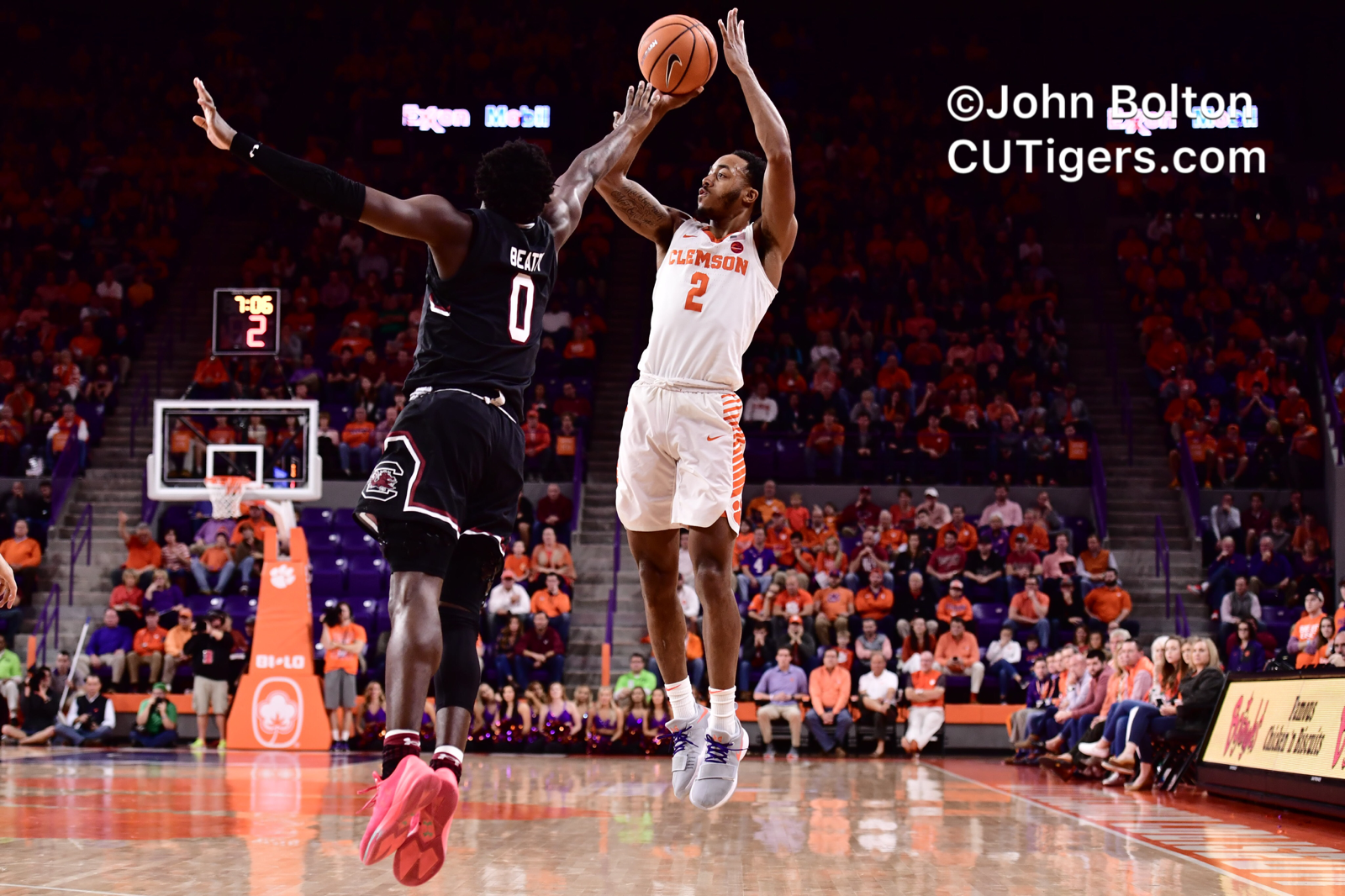 CLEMSON, S.C. — Behind a career-high 25 points from Marcquise Reed combined with the least amount of points surrendered to South Carolina in 46 years, Clemson University men’s basketball dominated South Carolina and beat them handily 64-48 on Tuesday evening.

Clemson is 38-2 all-time under head coach Brad Brownell when allowing less than 50 points.

Clemson set the tone early in a low scoring defensive battle, maintaining a steady advantage throughout much of the first half, which culminated in a five-point lead after the first stanza. Out of the break, the Tigers began to flex its defensive muscle against the Gamecocks (8-3) getting out to a 14-6 run to open up a 45-32 lead at the 9:49 mark of the second half.

The Tigers pushed its lead to a game-high 19 points on a Reed 3-pointer that contributed to a 12-4 run to open up a 64-43 lead, eventually finishing off the Gamecocks by 18 at the final buzzer. The 16-point victory stands as the largest scoring margin for Clemson over South Carolina since a 74-53 win on Dec. 2, 2006.

Elijah Thomas filled up the stat sheet with eight points and matched Reed’s six rebounds and three blocks. Despite a tough shooting night, Donte Grantham led the Tigers with seven rebounds and added an assist and a block in the effort.

Clemson will return to the floor once more before the holidays when it takes on Louisiana-Lafayette on Friday, Dec. 22. Game time is set for 3 p.m.from Littlejohn Coliseum.

Notes: Clemson improves to 10-1 on the season … the win marks the second consecutive victory over South Carolina in the Palmetto Series Rivalry … the 48 points allowed to the Gamecocks was the lowest total in 46 years (47 points allowed on Feb. 6, 1971) … it also marks the lowest point total for the Gamecocks since they scored 46 points against Florida on March 4, 2014 … the 22 points in the second half was the lowest point total all season for South Carolina in a single half of play … the win was head coach Brad Brownell’s 134th at Clemson (five shy of passing Oliver Purnell for third all-time in Clemson history) … Reed’s 25 points was a career-high … it was also his third 20-point game of the season and 16th of his career … the Tigers held South Carolina to its lowest 3-point field goal percentage of the season (12.5).