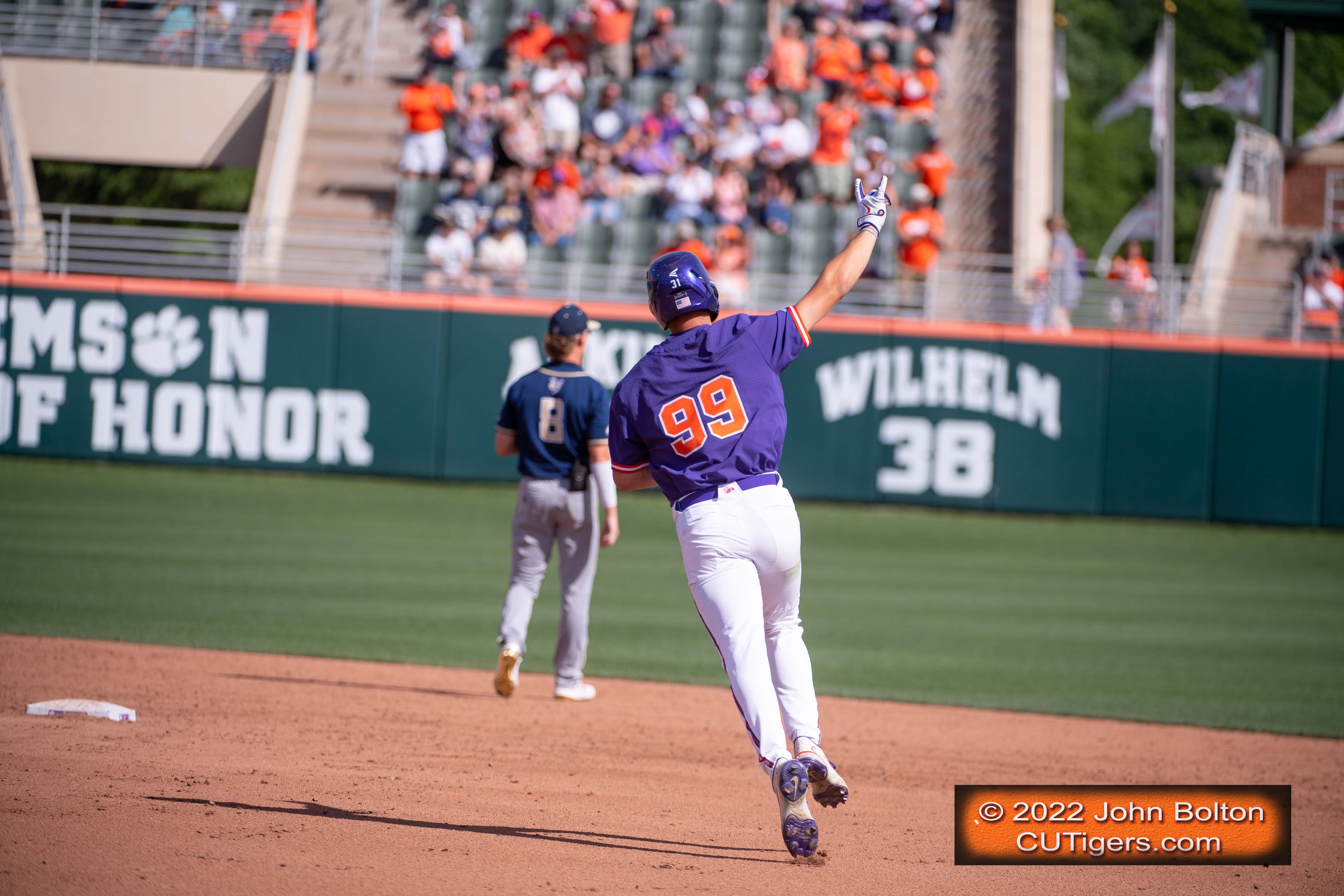 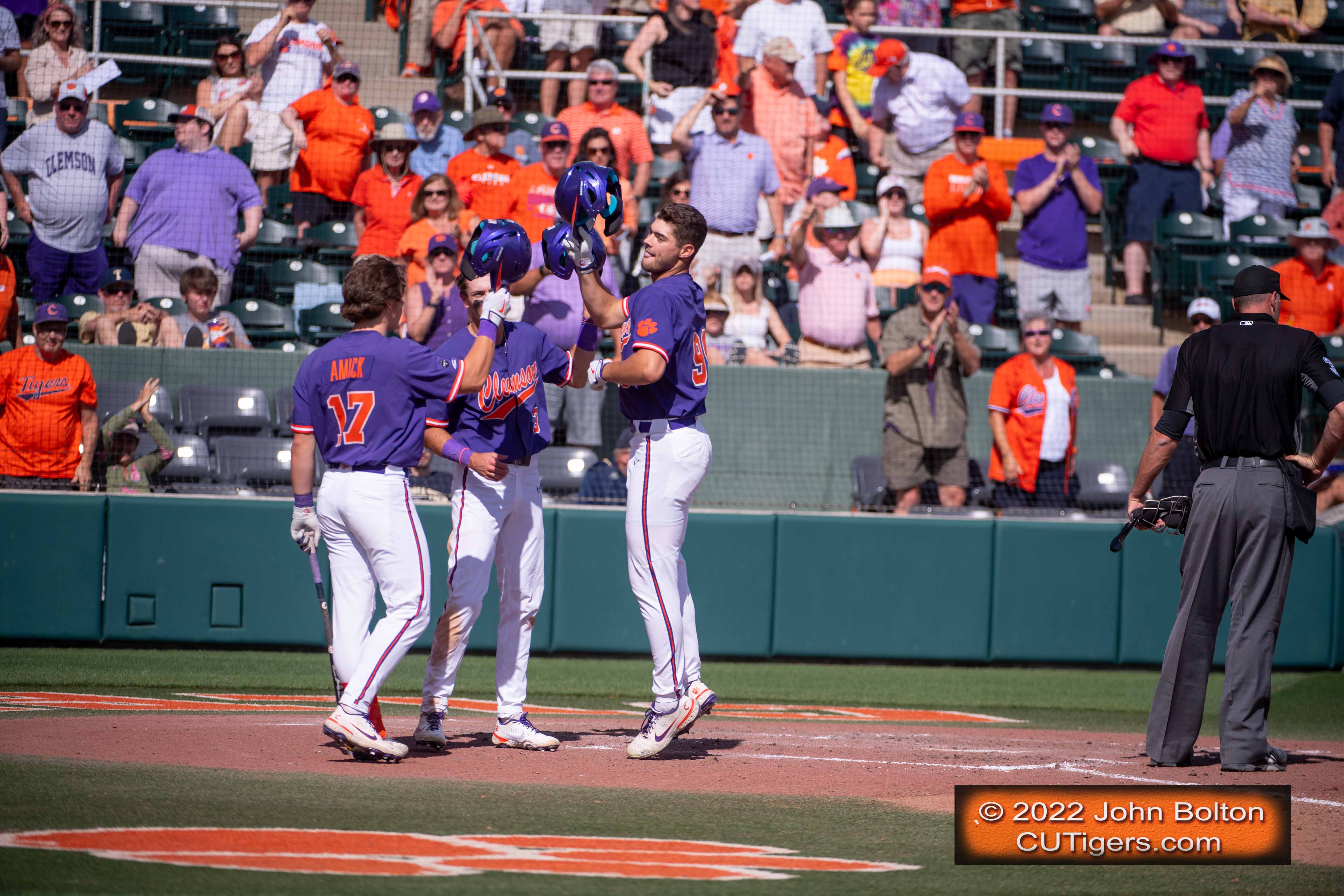 CLEMSON, SC - Just like Friday, the Tigers built a big lead on the Jackets, but this time, they would need it. The Tigers jumped out to a 5-0 lead in the 1st and led 12-1 after 6 innings, but the bull pen gave up 8 unanswered runs to make it close. In fact, Tech had the tying run at the plate with 2 outs in the 9th, so Monte had to bring in closer Ryan Ammons, who he hoped to save for Sunday, for the final out. Fortunately, Ammons was able to get that out to secure the 12-9 win and probably the easiest save in his career. 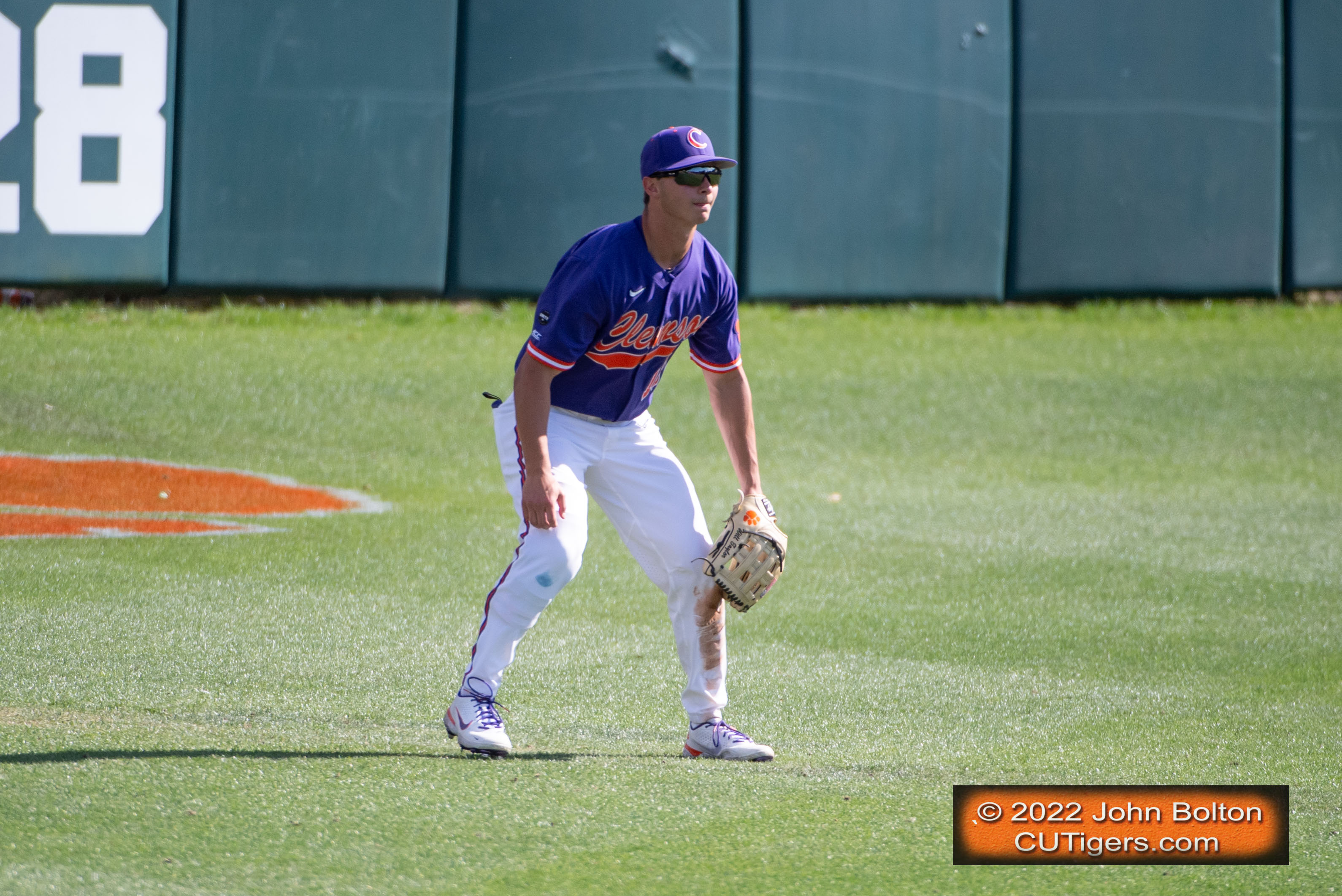 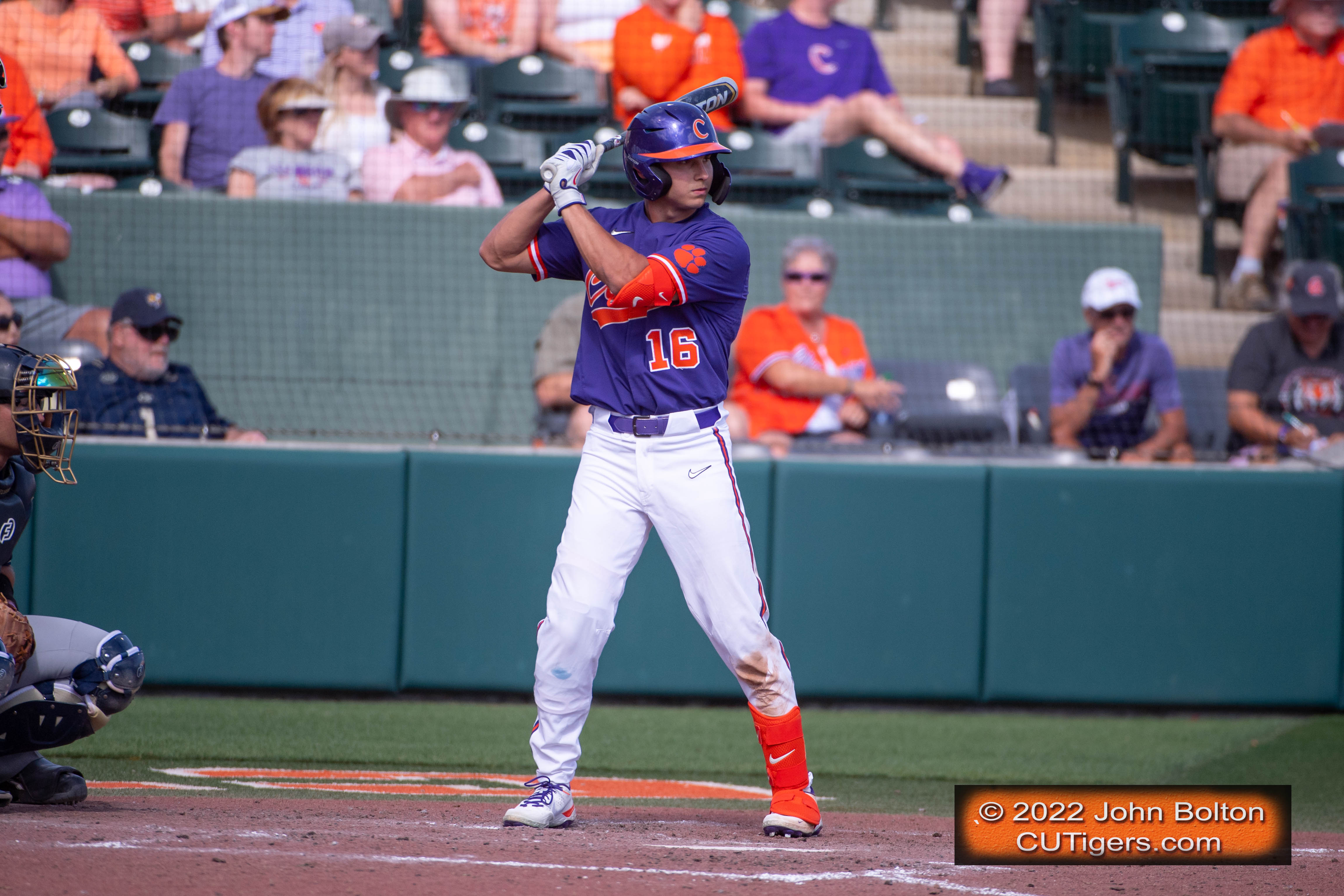 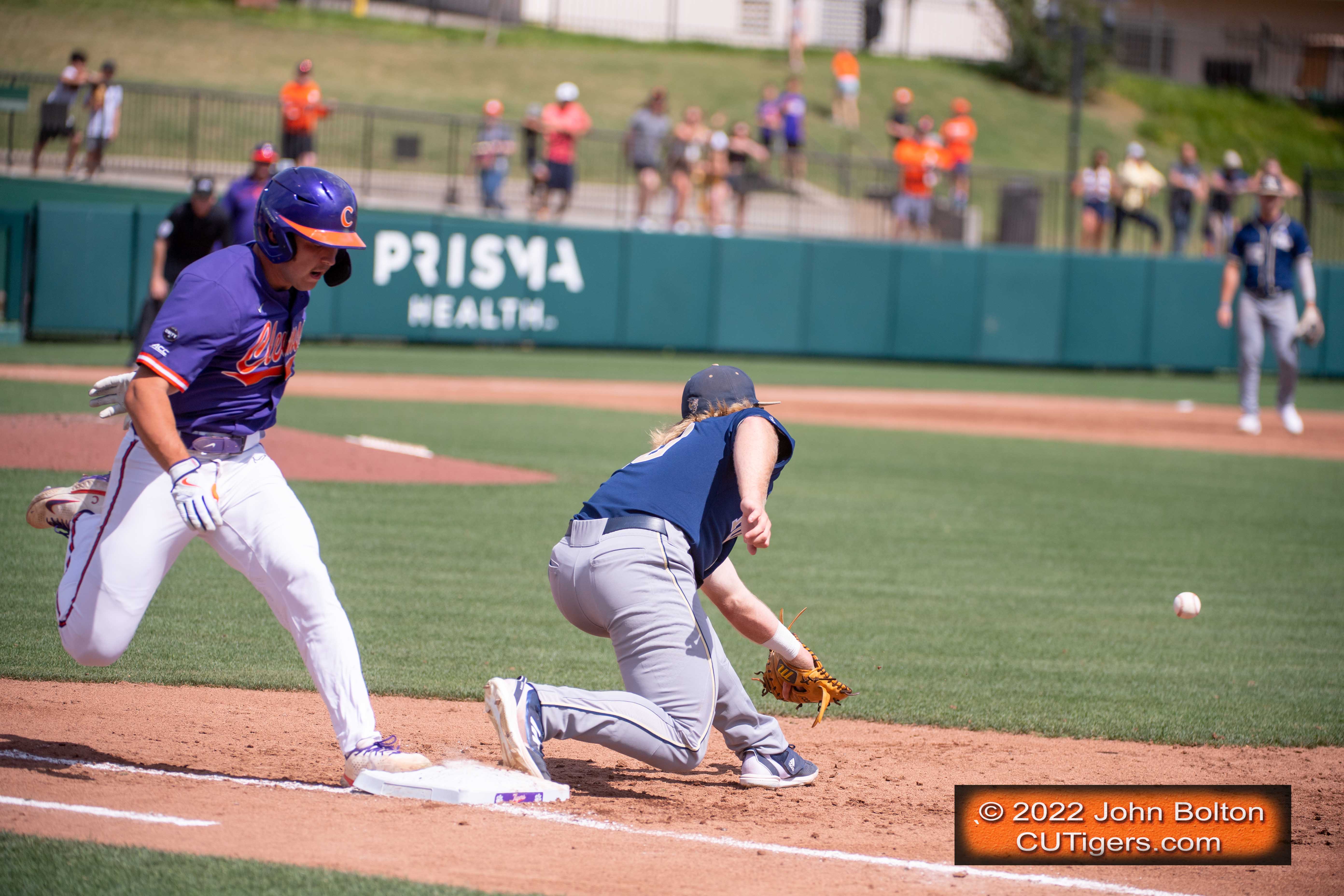 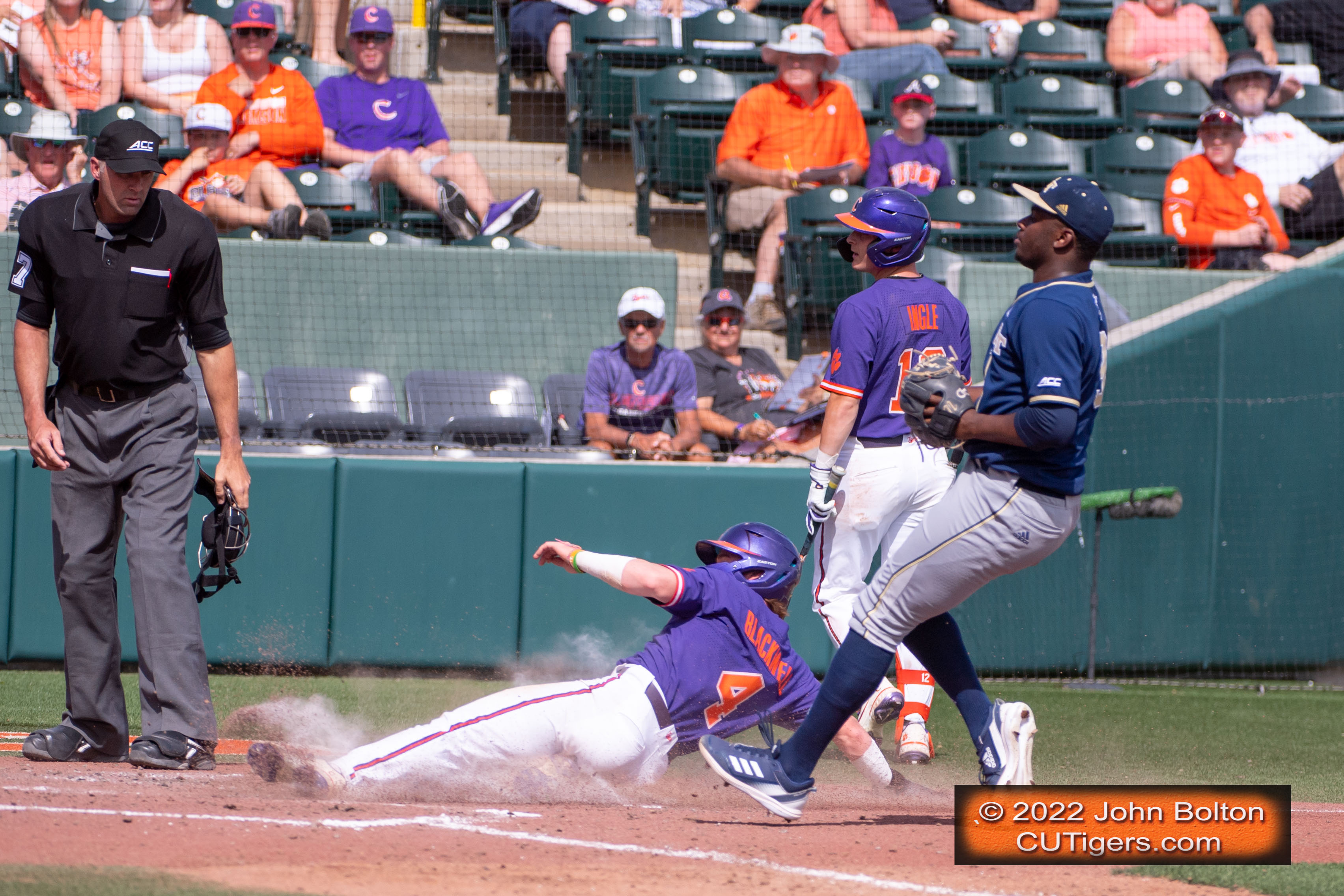 Wagner was 0-4 and both Wright and Corbitt were out, so it's pretty remarkable that the Tigers were still able to score 12 runs. I might have jinxed Wagner and Tech's Parada when I billed this series as a showdown of two of the nation's best hitters. They are a combined 1-16 with no HR's and 4 K's! Wagner has reached base 3 times although he is hitless. Grice was 3-4 with 6 RBI's, a double and homering in consecutive at bats. Perhaps he'll hang on to that No.99 jersey! He wore it earlier this season when he forgot to pack his No.31, and he seems to hit like No.99 Aaron Judge when he wears that number. Will Taylor made his second straight start and debut in the field at left, hitting two singles and scoring a run. Brewer was 2-4 with a walk, an RBI and 3 runs scored. 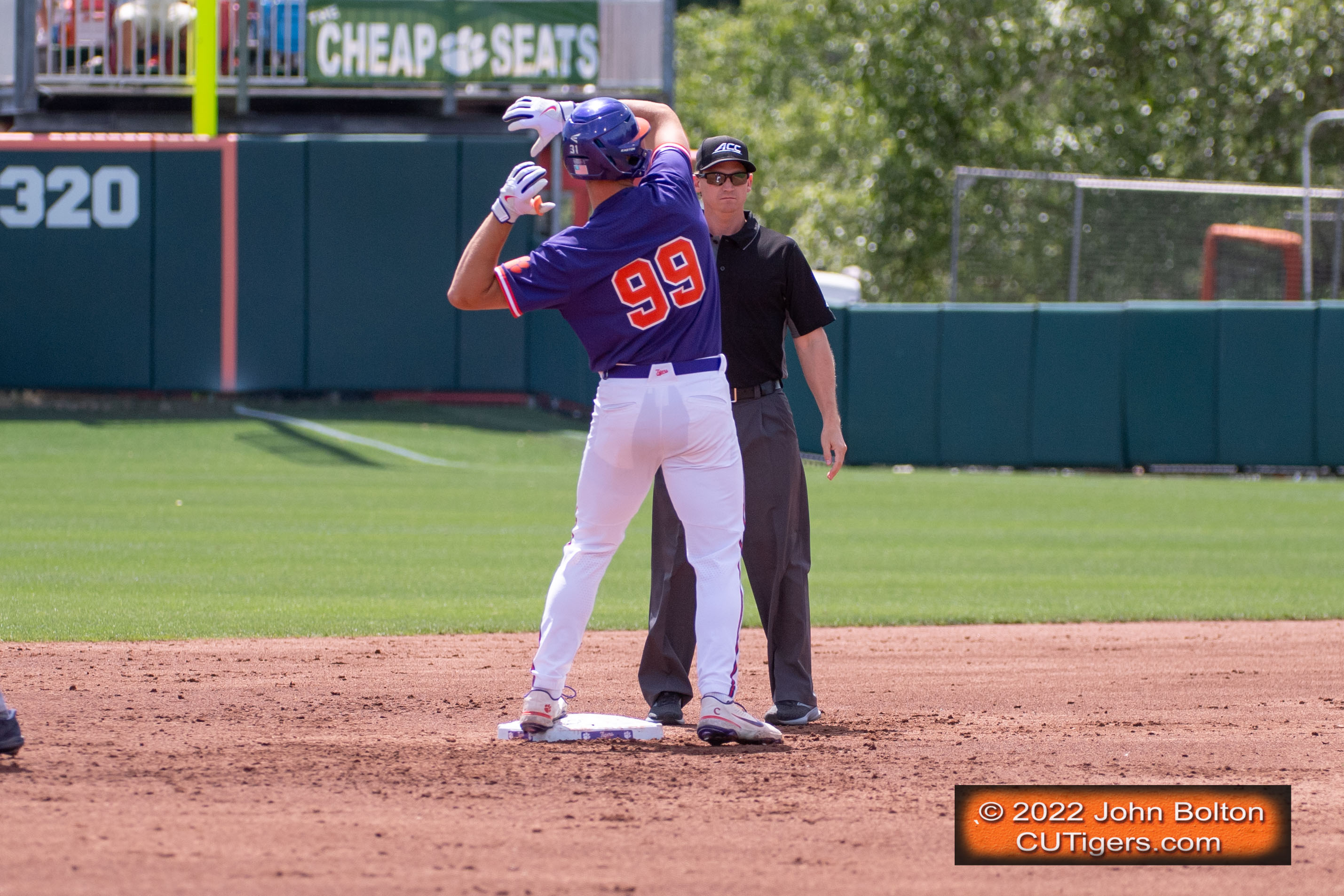 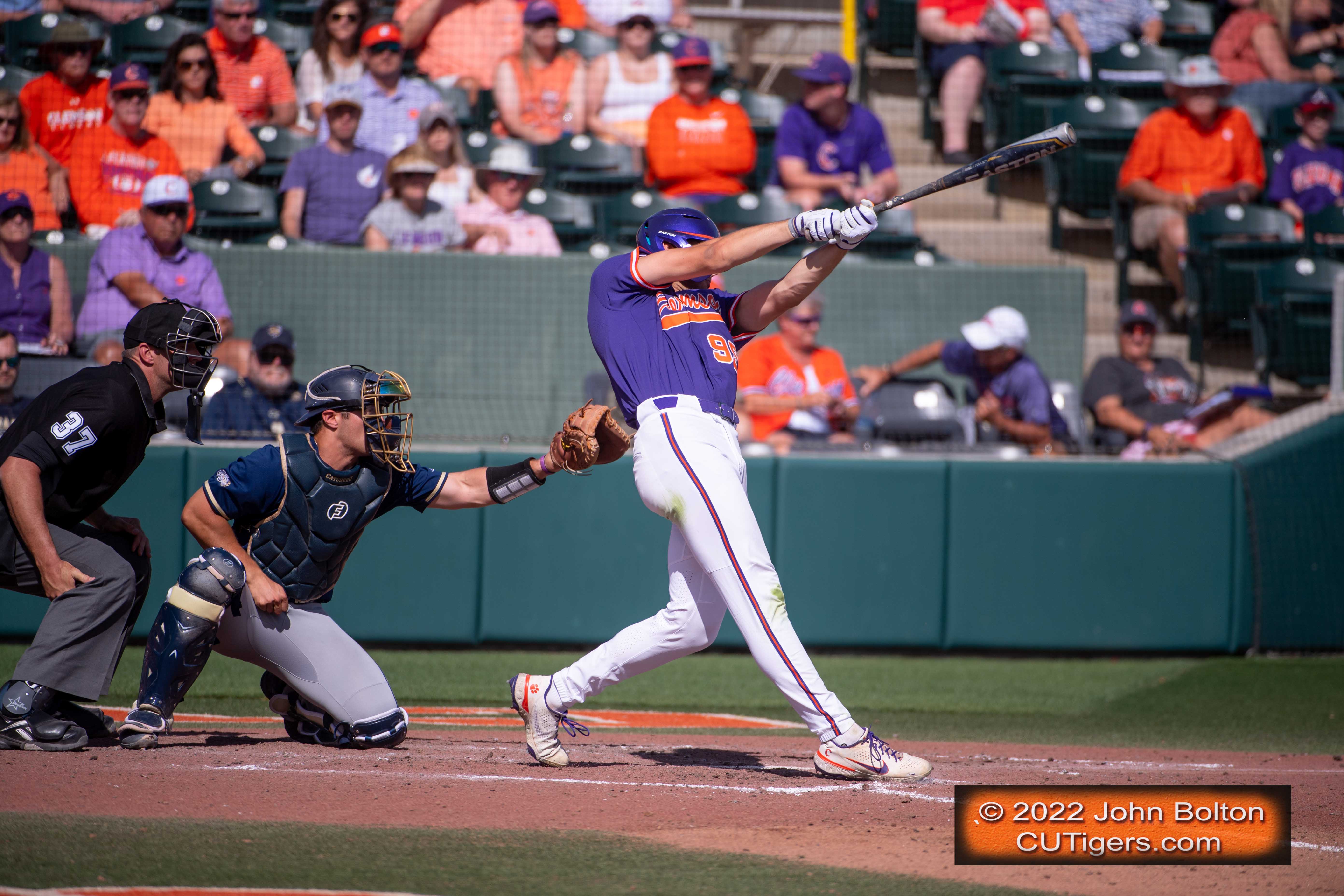 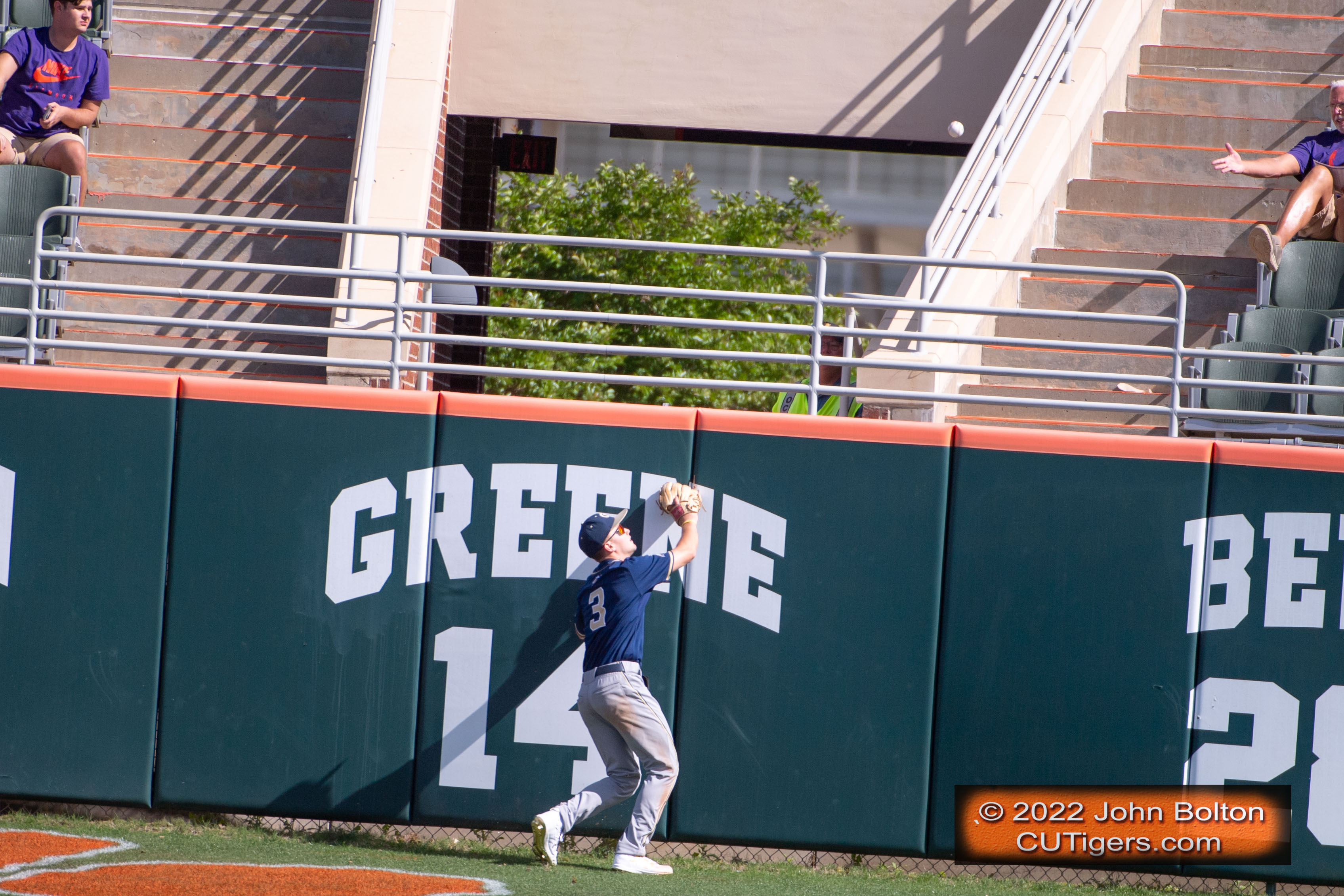 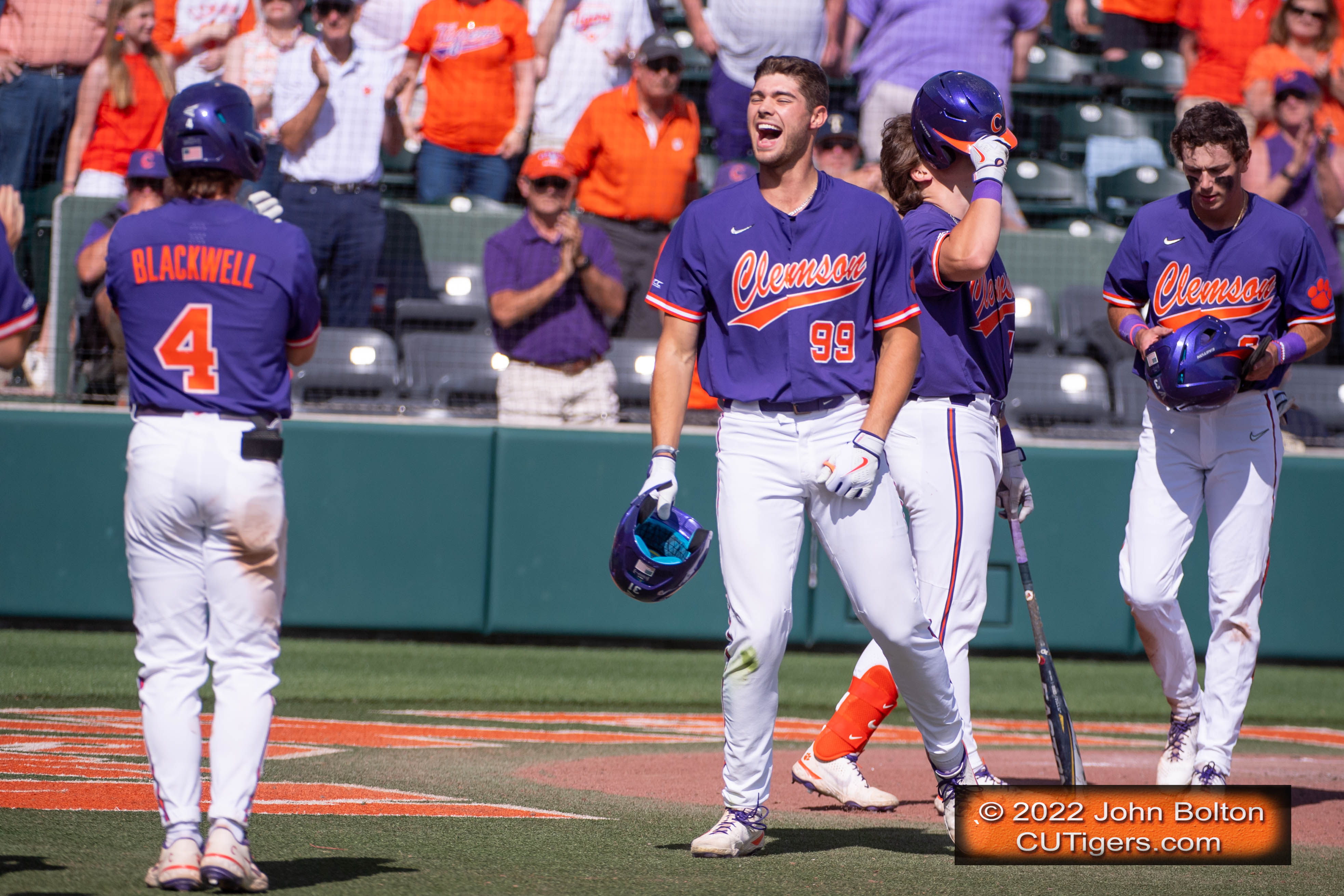 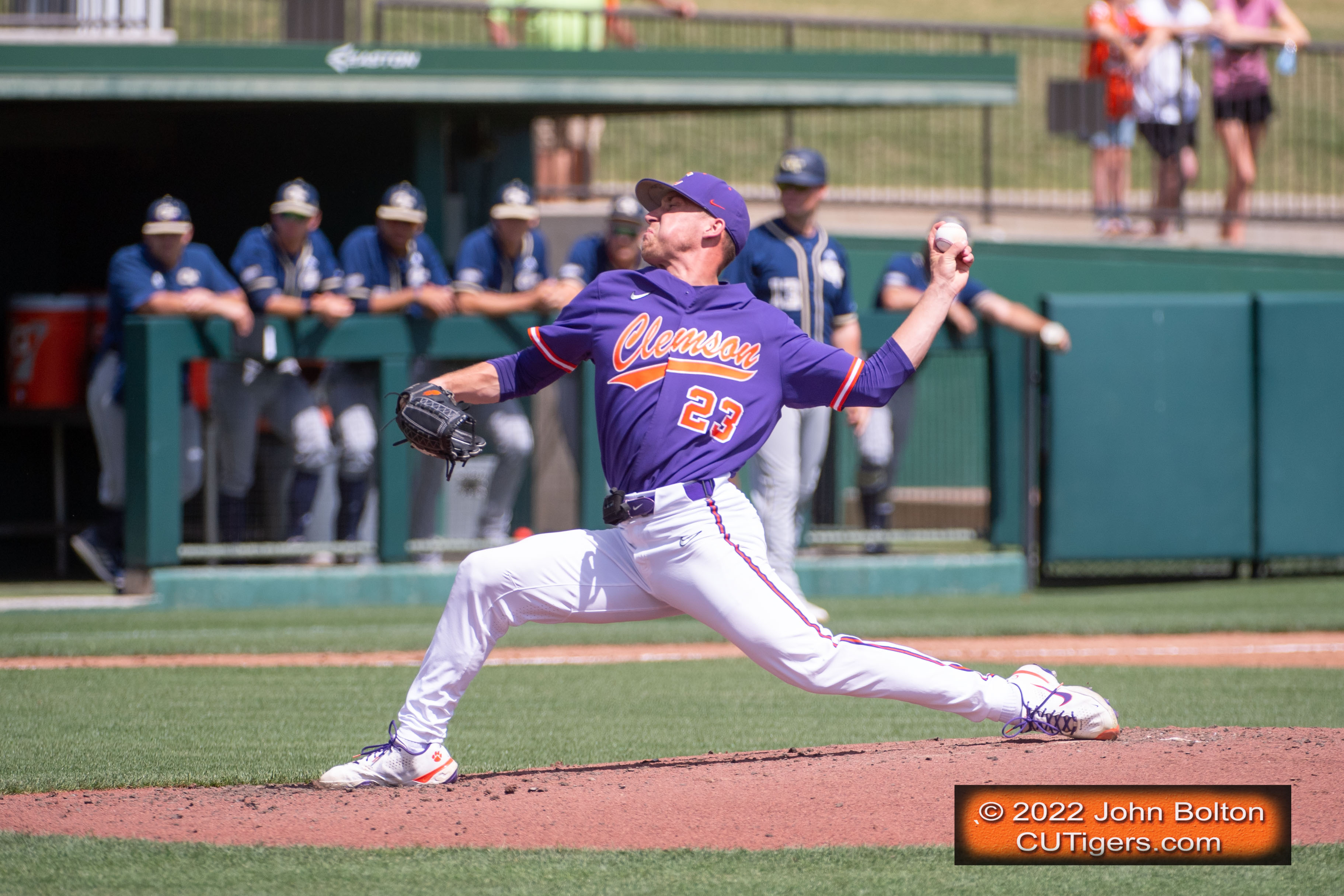 Gilbert made his 3rd straight weekend start after spending the first half of his career in the pen, and he allowed just one run in 4 innings. I guess Monte felt that he only had 4 good innings in him because he brought Gordon in to start the 5th with a 5-1 lead. Unfortunately for Gilbert, that deprived him of the win. Gordon did well in his first couple innings but then gave up a walk, a 2-run HR and a double for another run before Monte replaced him with Labriola. He and Hoffmann also struggled, giving up 5 more runs combined in the next inning and a half. Hoffmann gave up 2 HR's in the 9th. The Tigers held on, though, and clinched the series! It was their 11th win over a ranked team this season.
Post-game interviews are below!
MORE CLEMSON BASEBALL, SOFTBALL AND FOOTBALL COVERAGE HERE