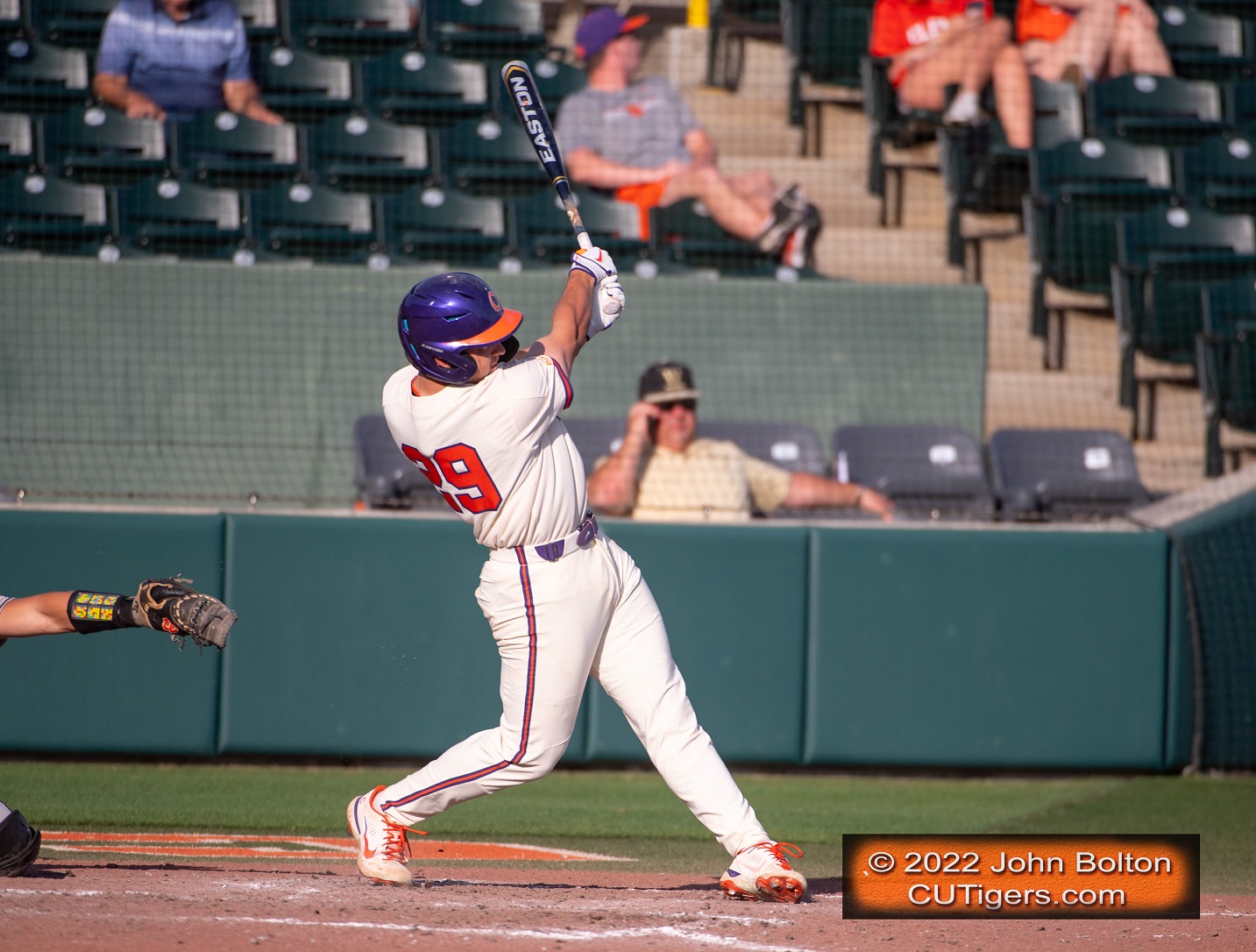 
WAGNER HITS 23RD HR, BUT CLEMSON LEAVES 16 ON BASE IN 7-5 LOSS TO COLLEGE OF CHARLESTON

After sweeping No.21 Georgia Tech over the weekend, the Tigers jumped up to No.18 in the RPI, but they were unable to carry the momentum on the road to Columbia against Monte Lee's alma mater, College of Charleston, on Tuesday. The Tigers won the first meeting in Clemson 2-1 thanks to a 2-run HR by Grice, and this game would be just as tight.

With Barlow now starting on the weekend, freshman Ricky Williams got the start on the mound, and he gave up 2 runs in the 2nd on a single, a hit batter and a double, all with 2 outs. Hit batters, walks and 2-out hits were a theme all night for the Tigers' pitchers and ultimately did them in.

The Tigers answered by tying the game in the next inning with an RBI single by Wagner and a sac fly by Wright, who missed the previous 2 games. They took a 3-2 lead in the 4th on an RBI single by Blackwell, who was 3-5 with a walk. However, the Cougars tied the game in the bottom half with a full-count walk, a double and a sac fly. Williams gave up the leadoff walk, and Gordon came in from the pen to give up the double and run. Gordon retired the first two batters in the 5th, but, again, walks and 2-out hits were the Tigers' downfall. He gave up a full-count walk, a triple and a single all with 2 outs to give the Cougars a 5-3 lead.

Wagner tied the game with a 2-run HR in the 6th, his 23rd of the season and 2nd in consecutive games. He is now tied for 2nd nationally, just 2 HR's behind Texas's Ivan Melendez for the national lead. Wagner was 2-4 with 2 walks and 3 RBI's, and he's now batting .395 on the season, which is 5th in the Power Five.

Unfortunately, the Cougars answered in the bottom half with another hit batter, this time by Dill, and 2-out single to retake the lead 6-5. They added an insurance run in the 7th after Lindley loaded the bases with another full-count walk.

The Tigers left 16 on base--exactly twice as many as the Cougars--and they struck out 8 times on full count. They still could have won in spite of all that if not for the walks, hit batters and 2-out hits by the pitchers.

It's a tough loss, but I'm not sure it really hurts the Tigers' chances of making the NCAA Tournament. In my opinion, they've done enough in their non-conference schedule and have 12 wins over ranked teams. A 7-5 road loss to a good College of Charleston program is not going to hurt them, but they need to make the ACC Tournament. If they make the ACC Tournament, they make the NCAA Tourney in my opinion. So they need to find a way to win at least one game at No.14 UVA this weekend. Assuming they sweep dead-last Boston College the following weekend, that should get them in the ACC Tournament because both Duke and UNC have 2 tough ACC series left. The Tigers are currently a half-game ahead of Duke for the last spot in the ACC Tourney.