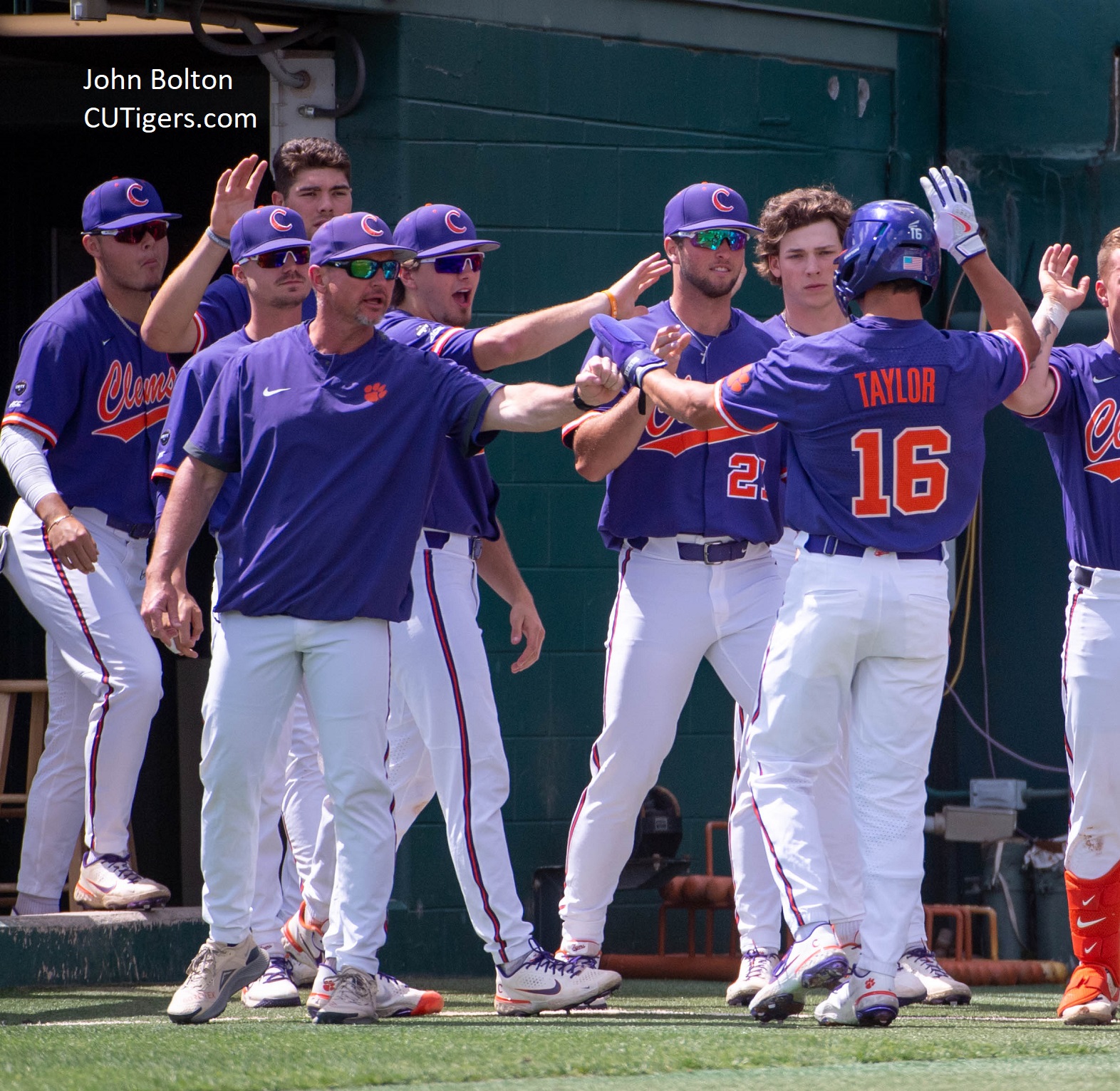 Photo by John Bolton
With game one tied 4-4 in the 4th, a rain delay forced the Tigers to wait for hours on Friday, through the night until Saturday afternoon to resume play. They led No.9 UVA 4-0 until the disastrous 7-run 4th that lasted overnight and featured 2 pitchers and 5 walks, including a couple with the bases loaded. Wagner, Corbitt and French each homered. It was Wagner's 3rd straight game with a homer, and he is now 2nd nationally with 24 on the season, trailing Texas's Ivan Melendez by one for the lead! The Tigers wound up losing game one 11-6, but they were able to bounce back and even the series on Sunday after another postponement.
Gilbert was outstanding on the mound on Sunday, allowing just one walk and 2 runs in 6 innings pitched. Gordon was also on his A game, allowing just one base runner in 3 innings with 4 K's and posting his first career save. For the second straight game, the Tigers jumped out to an early lead with 3 runs in the 1st. Gilbert gave up a double, a single and a sac fly in the 2nd to make it 3-1, but the Tigers added 2 more runs in the 3rd and a run in the 4th, 6th and 8th. Freshman Will Taylor, the wide receiver standout who just made his baseball debut last weekend, reached base 4 times with a single, 2 walks and his 1st career HR, scoring 3 times. He is batting .360 since coming off his ACL rehab! Wright was 3-5 and also homered, his 10th of the season. He is 7-13 since missing the second and third games against Georgia Tech last weekend, and he's 13-25 over his last 6 games! Hawkins was 3-5 on Sunday as well. Ingle is still out with an injured forearm.
I wrote before that I thought one win at UVA this weekend would get the Tigers into both the ACC and NCAA Tournaments, assuming they sweep dead-last BC at home next weekend. They have accomplished that, and if they can take the rubber match on Sunday night (barring weather), their position will be even stronger. It might be a good thing if weather prevents them from playing a rubber match with the Hoos. A 1-1 series split would obviously help their cause more than going 1-2 in the series, although that is still respectable. The Tigers are currently half a game ahead of Duke for the last spot in the ACC Tournament, and Duke has to play its last series at VA Tech, which is 25-5 at home. The Tigers host dead-last BC next weekend. They would have to lose at least 2 of 3 to BC, and Duke would have to win at least 2 of 3 at VA Tech for the Tigers to miss the ACC Tourney, and I don't see either of those happening. First, the Tigers have a great opportunity to win a road series against a top-10 team, and then they have another tough road game at Coastal Carolina, who thumped the Tigers in Clemson this season. It will be fun to see how it all plays out!
MORE CLEMSON SOFTBALL, BASEBALL AND FOOTBALL COVERAGE HERE