NO.10 CLEMSON BEATS NO.22 LOUISIANA 8-0 IN 5 INNINGS, ADVANCES TO FIRST-EVER NCAA SUPER REGIONAL

Photo by John Bolton
CLEMSON, SC - After surviving a pressure-packed 1-0 pitchers' duel against No.17 Auburn on Saturday, the Lady Tigers would face their third different opponent of the regional in No.22 Louisiana, which fought its way out of the loser's bracket to beat UNCW in 11 innings and a rested Auburn team 4-3 immediately after. The Tigers, on the other hand, had almost 24 hours rest and only played 5 innings on Friday. I was very curious to see if Rittman would do what I said he should have done in the ACC Championship and start a rested Millie Thompson instead of Valerie Cagle for a second straight day. He went with Cagle against FSU on short rest, and sure enough, she gave up 8 runs, including 4 in the 6th after the Tigers had a 5-4 lead. I firmly believe that the Tigers would have won the ACC Championship and perhaps earned a top-9 national seed if Thompson had started in the circle. Rittman didn't make the same mistake this time, however. He gave the ball to the rested Millie Thompson, who nearly pitched a perfect game in Friday's win, and she was just as impressive on Sunday! Her nasty changeup had Louisiana completely flummoxed, and she allowed just one hit and one walk in 5 innings. The Cajuns never even got a runner to 2nd base! Their coach told me after the game that they had scouted Cagle, expecting that she would be the starter, and they had no answer for Thompson. I'm sure fatigue was also a factor for Louisiana, which had to play a grueling 18 straight innings in the heat on Saturday and was playing again on Sunday about 12 hours later. Coach Glasco wouldn't use that as an excuse, however. 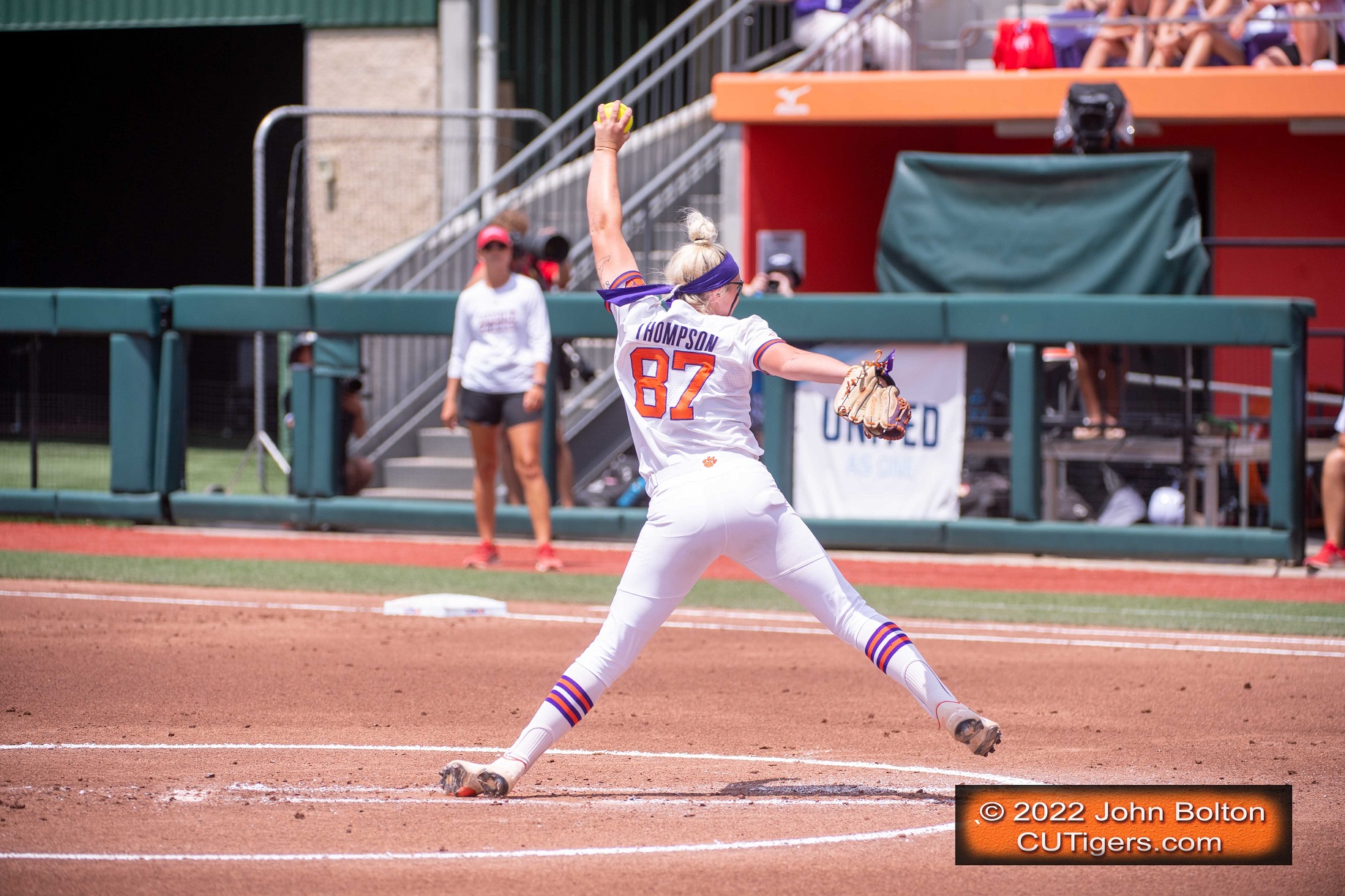 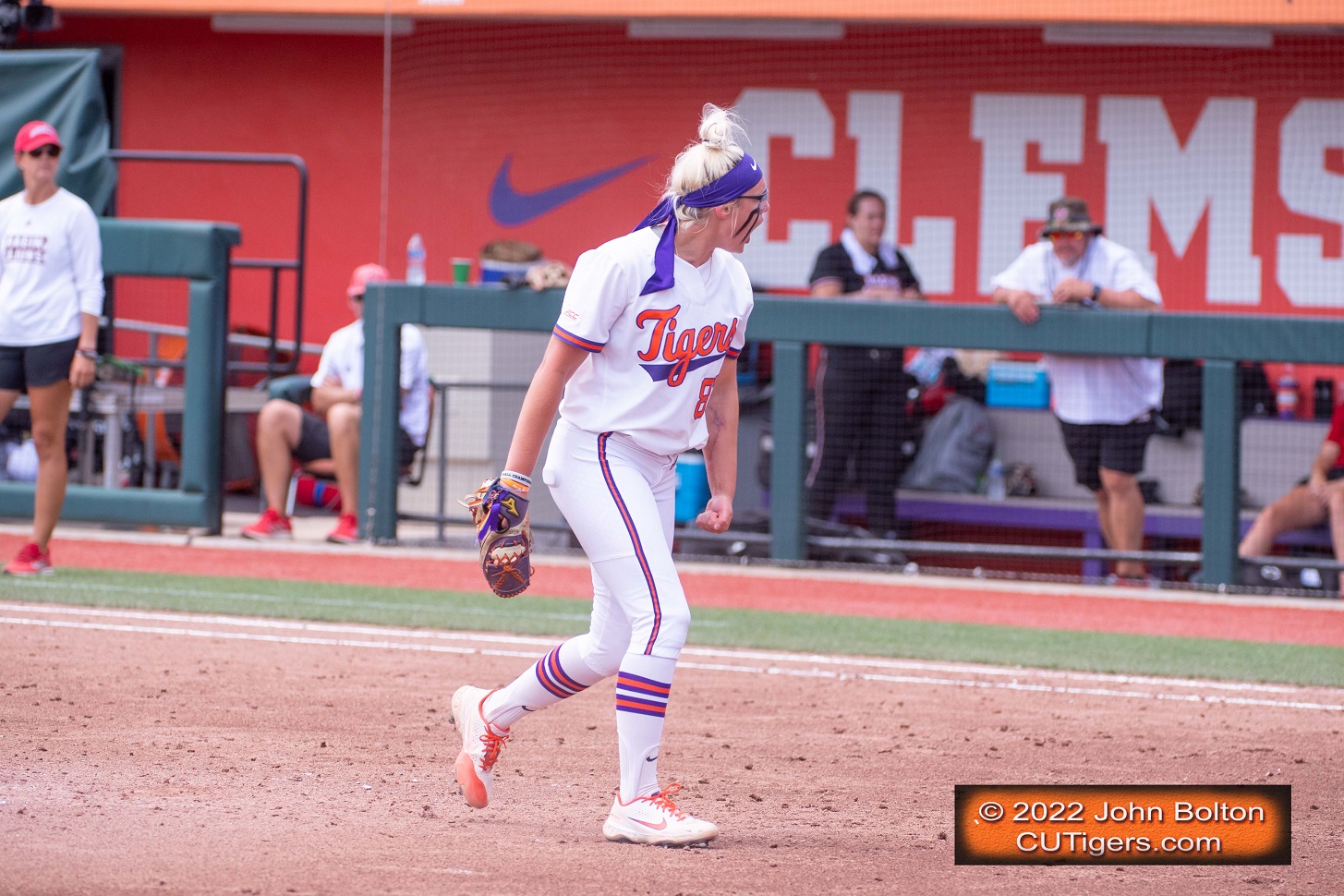 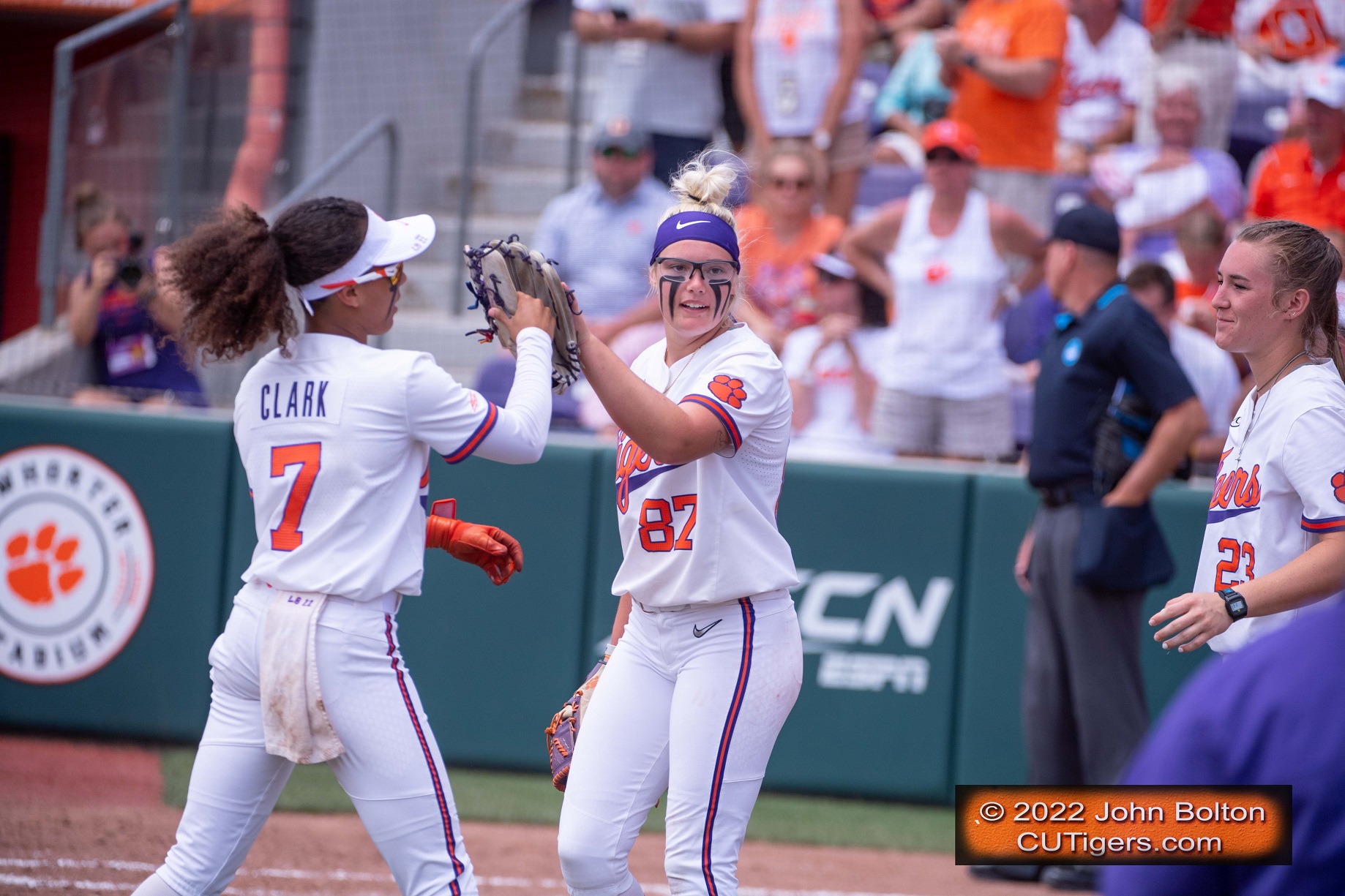 As for the Tigers' offense, they managed just 3 hits against Auburn on Saturday, but their bats didn't stay cold for long. Graduate Cammy Pereira led off the 1st with a single, and Cagle smashed a full-count single to drive her in from 2nd and give the Tigers an early 1-0 lead. It took a few innings, but the flood gates opened in the 4th. Freshman catcher Aby Vieira hit her 5th HR of the season to make it 2-0, Logoleo singled with one out, and then the Tigers went on a massive 2-out rally. Oda drew a walk to keep the inning alive, and 9-hitter Maddie Moore laced a 2-out double to make it 3-0. The freshman was the hero on Senior Day, hitting a walk-off single in the 8th to beat Georgia Tech 3-2 for the sweep. Leadoff batter Pereira followed with her 3rd single of the game to score 2 more. She was a perfect 3-3 in her last game, most likely, at McWhorter Stadium. Clark bunted for a single, and that set the stage for Valerie Cagle's 13th HR of the season, a 3-run bomb to make it 8-0! The Tigers scored 6 runs with 2 outs, and were headed for their 14th run-rule win of the season and 20th shutout. The Tigers shut out all 3 of their opponents in the regional sweep, including 2 ranked teams, and were the first in the nation to advance to a Super Regional. They outscored their opponents 18-0 over the weekend! 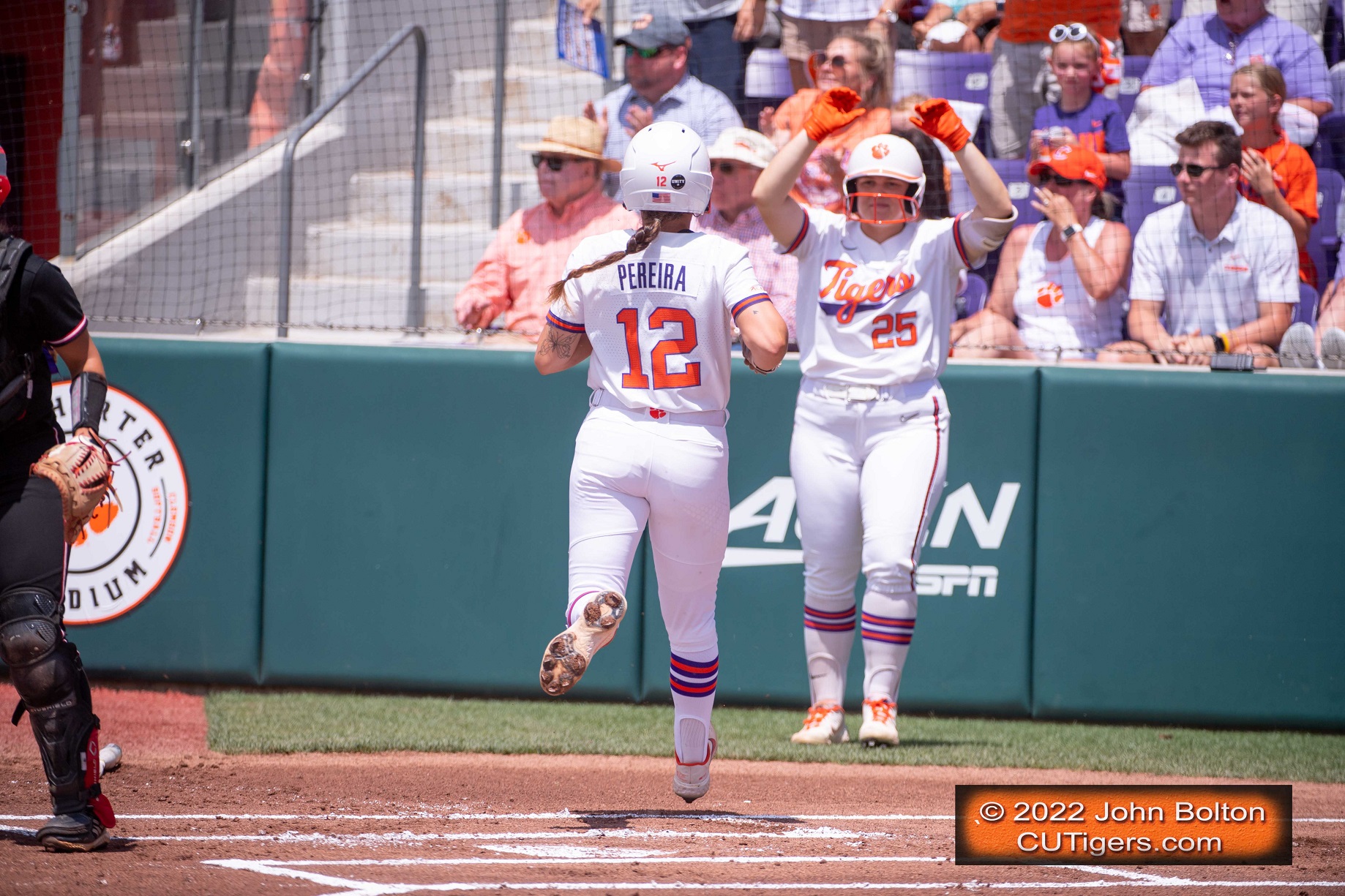 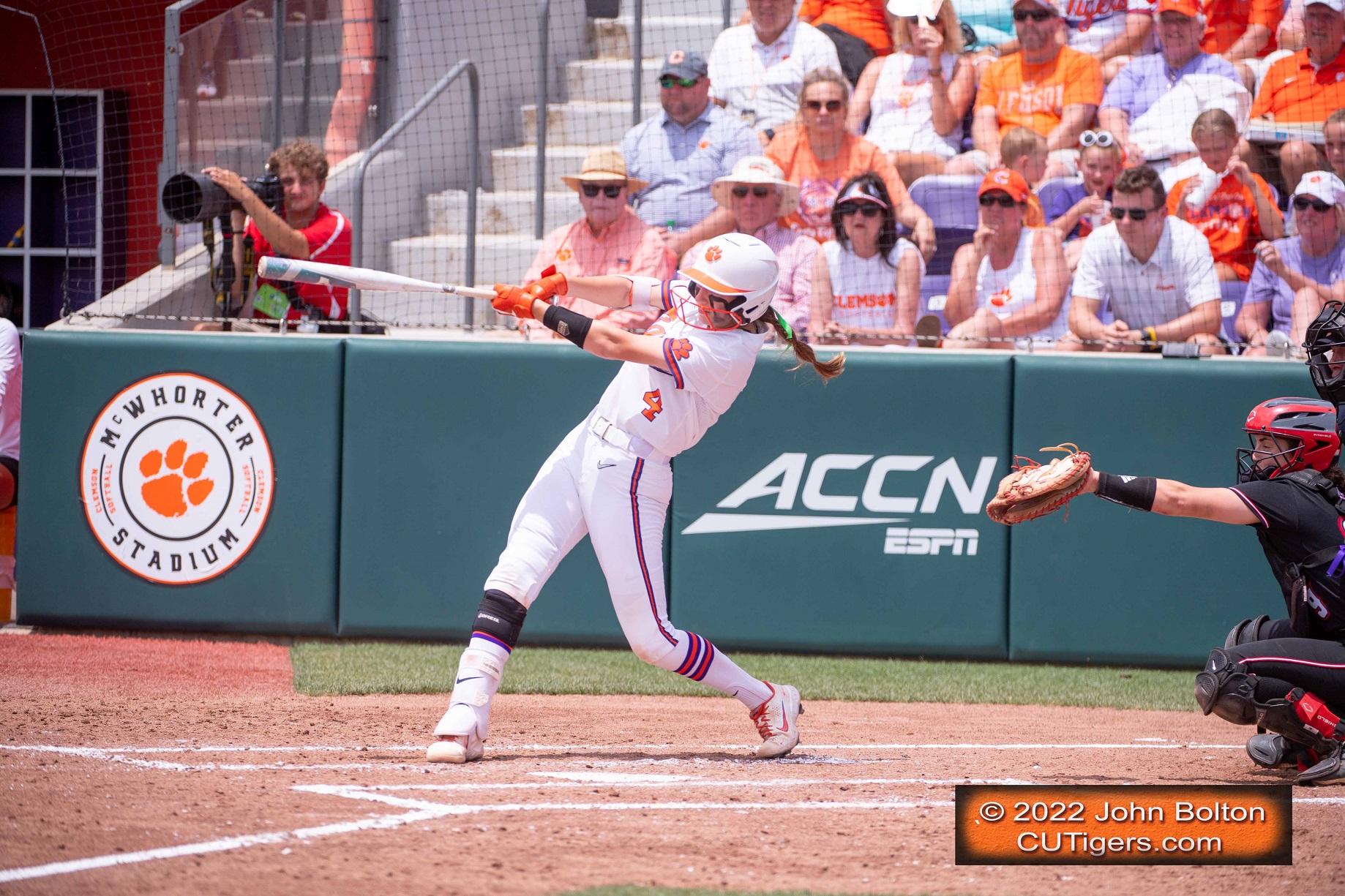 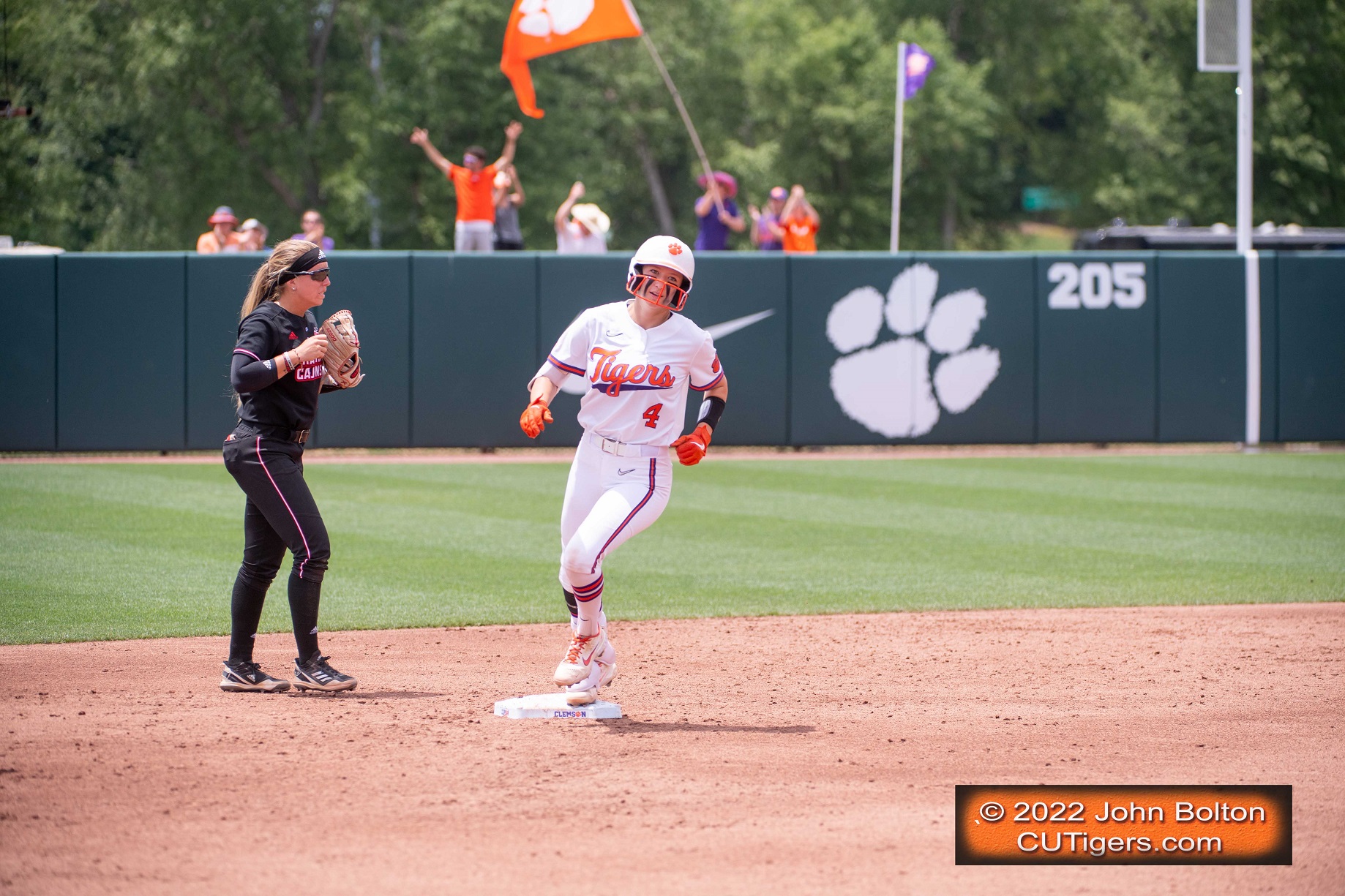 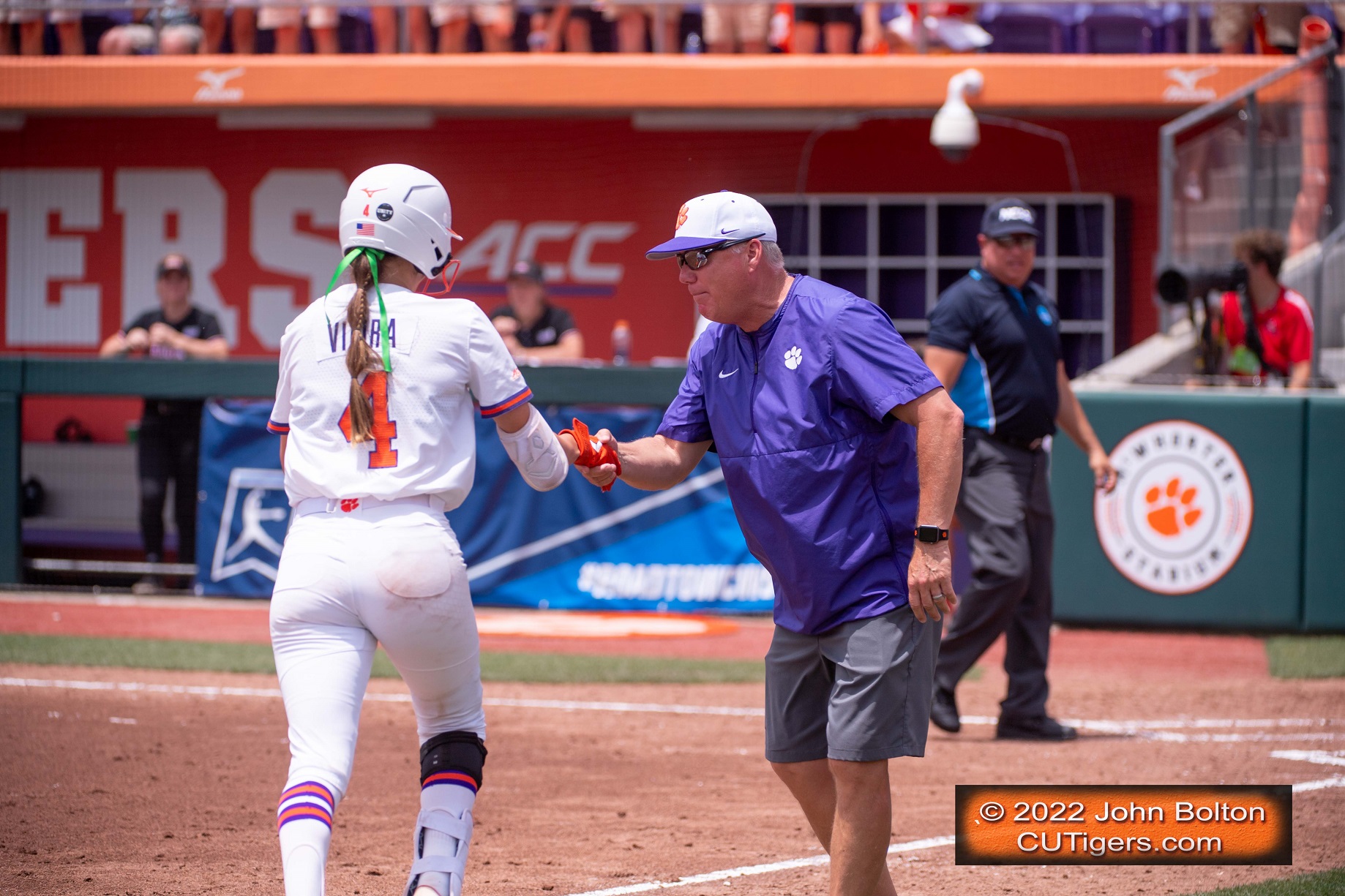 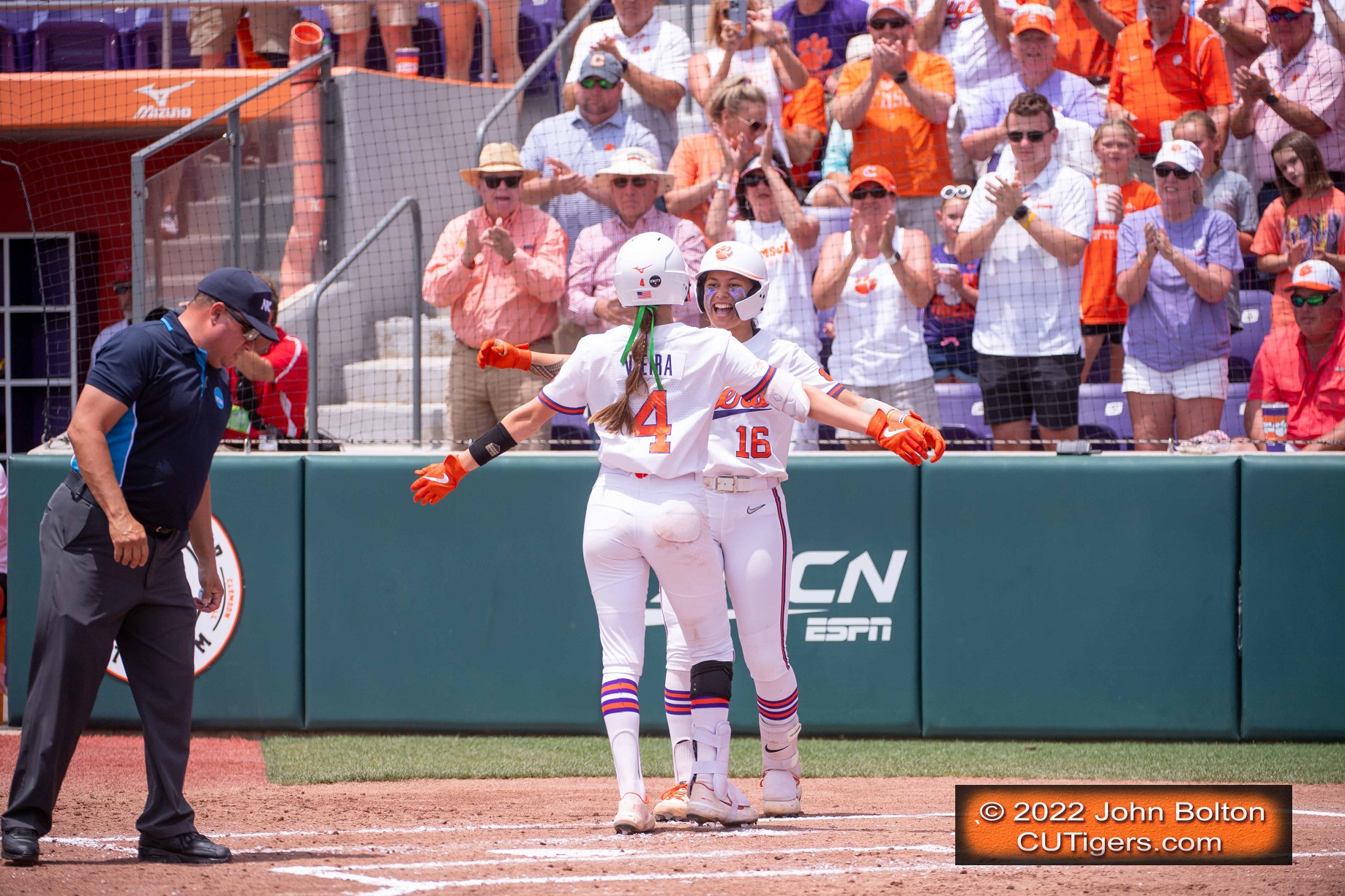 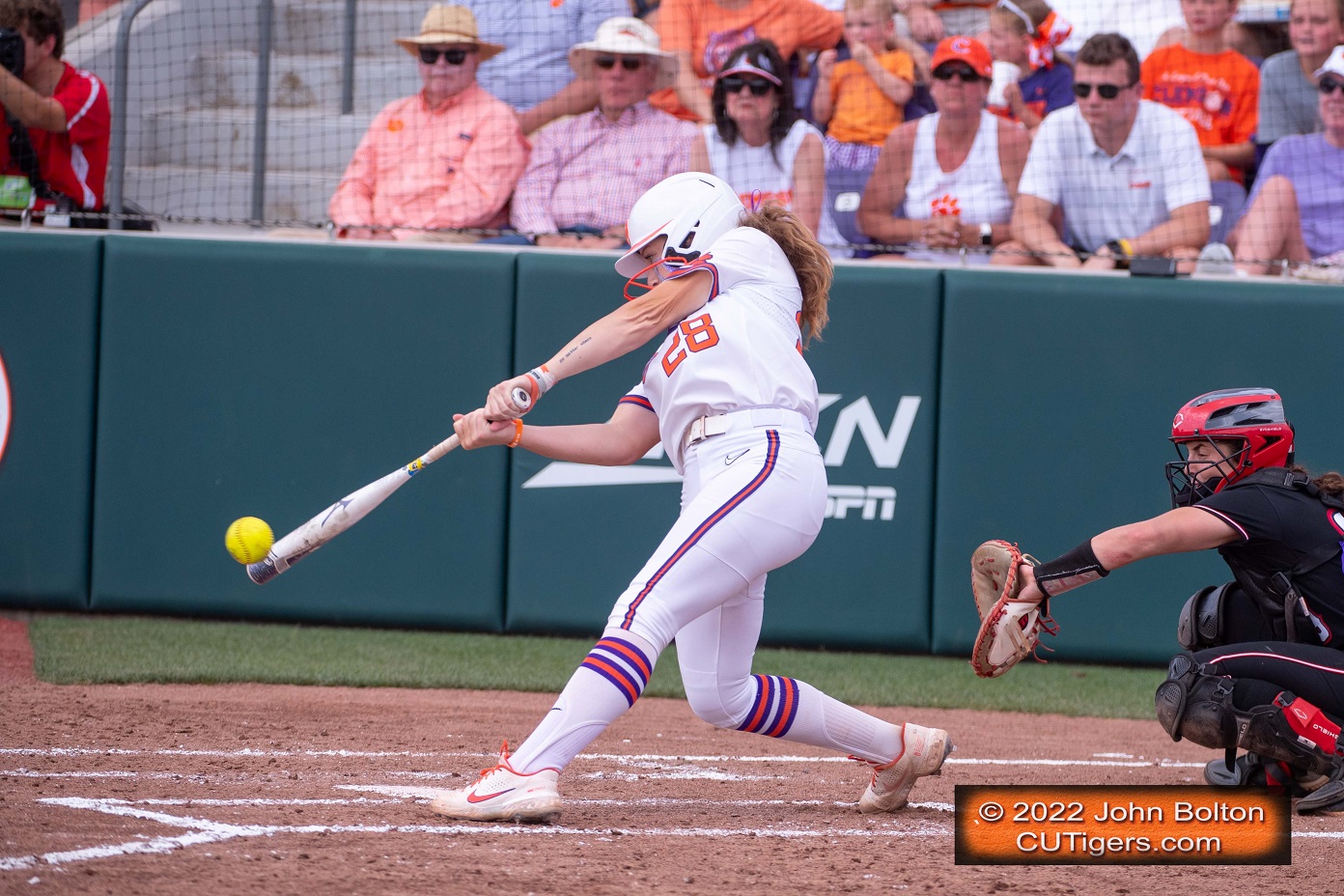 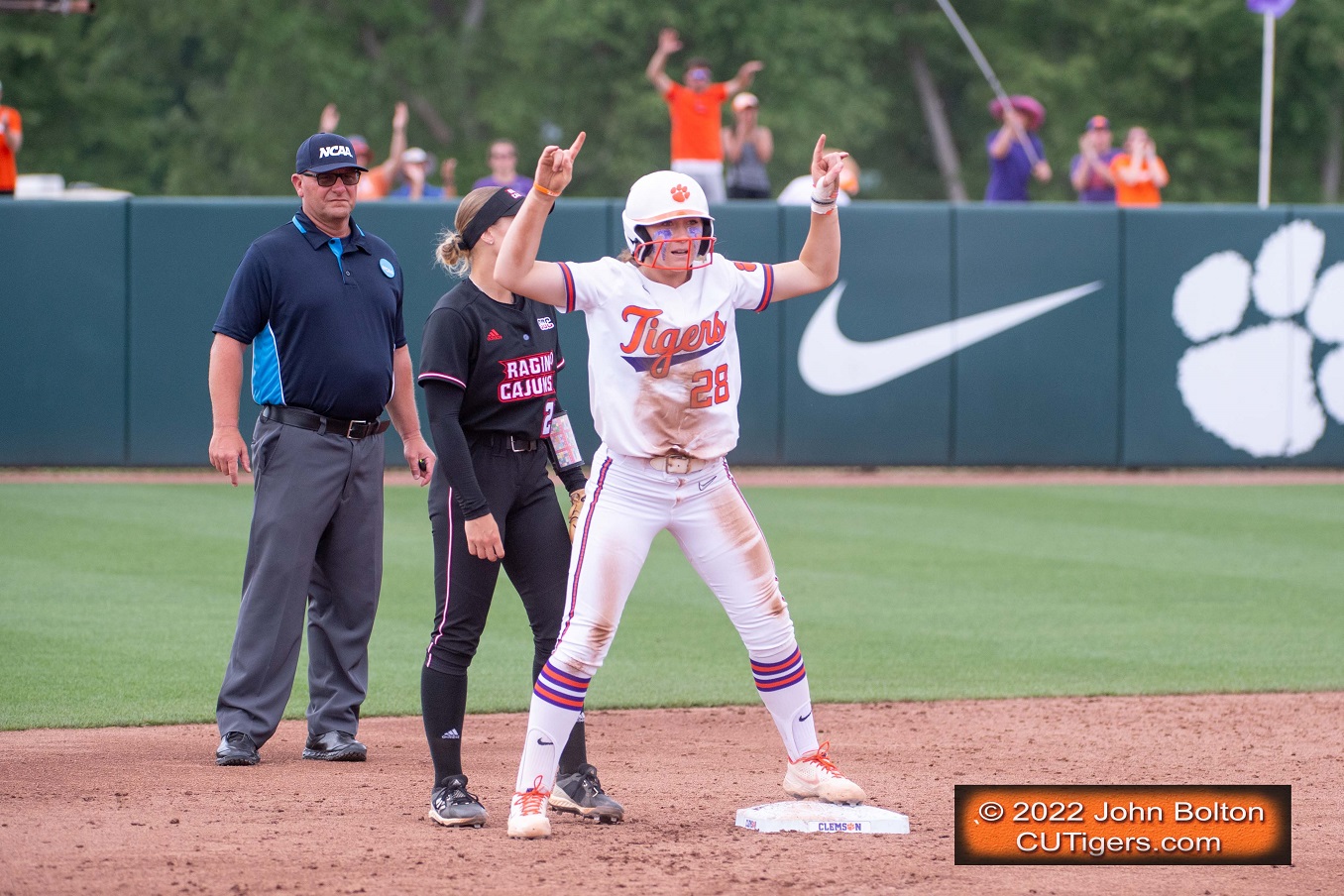 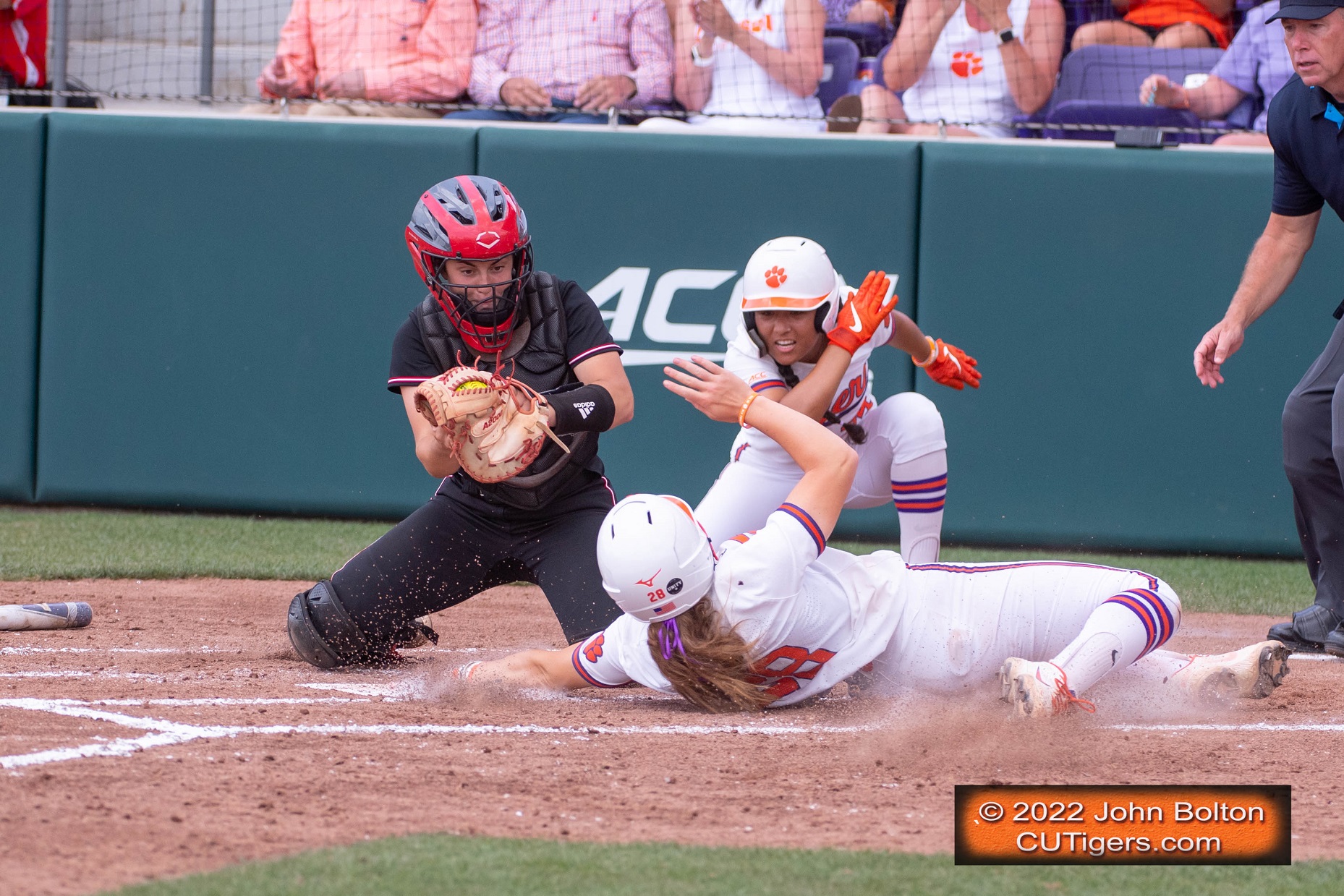 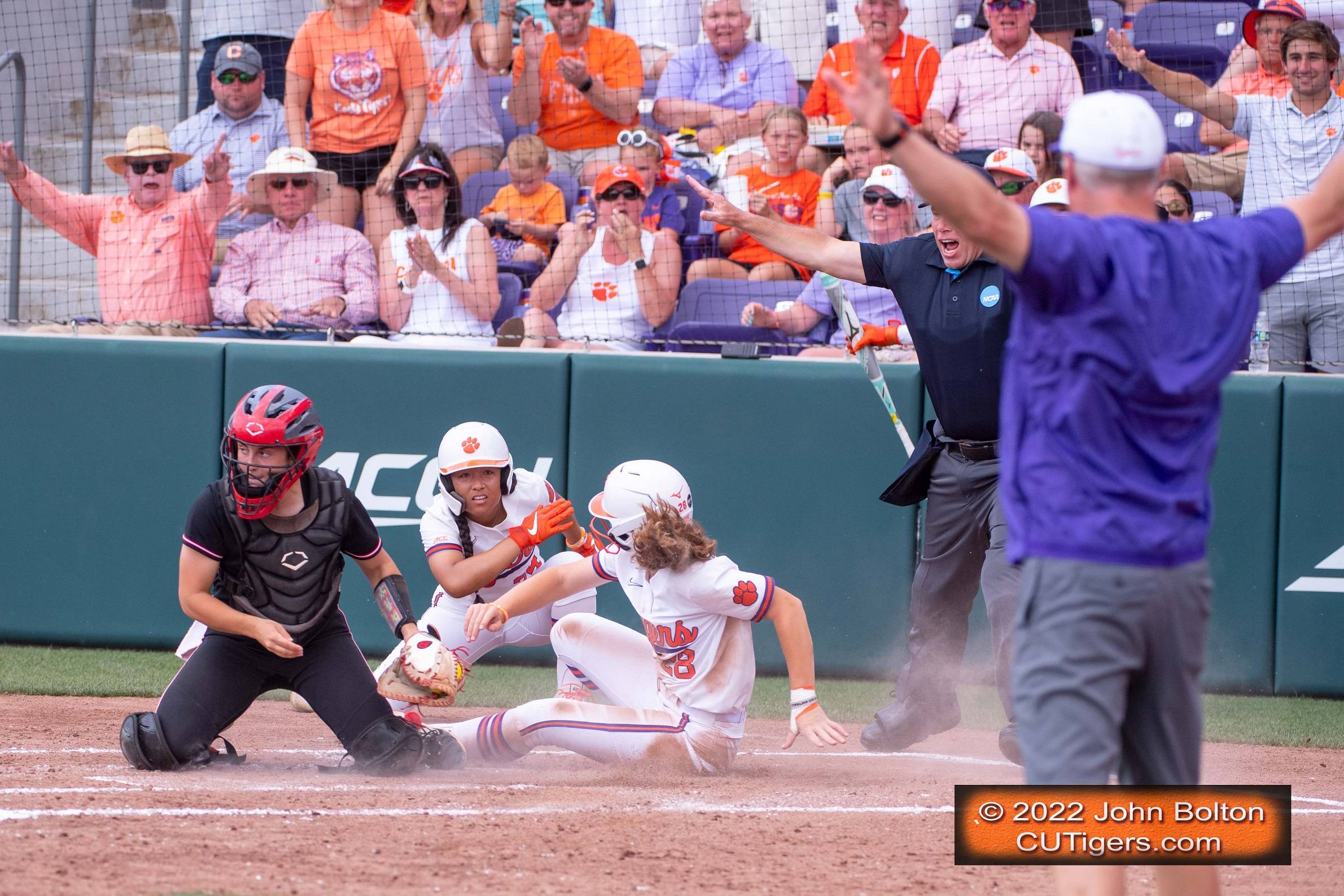 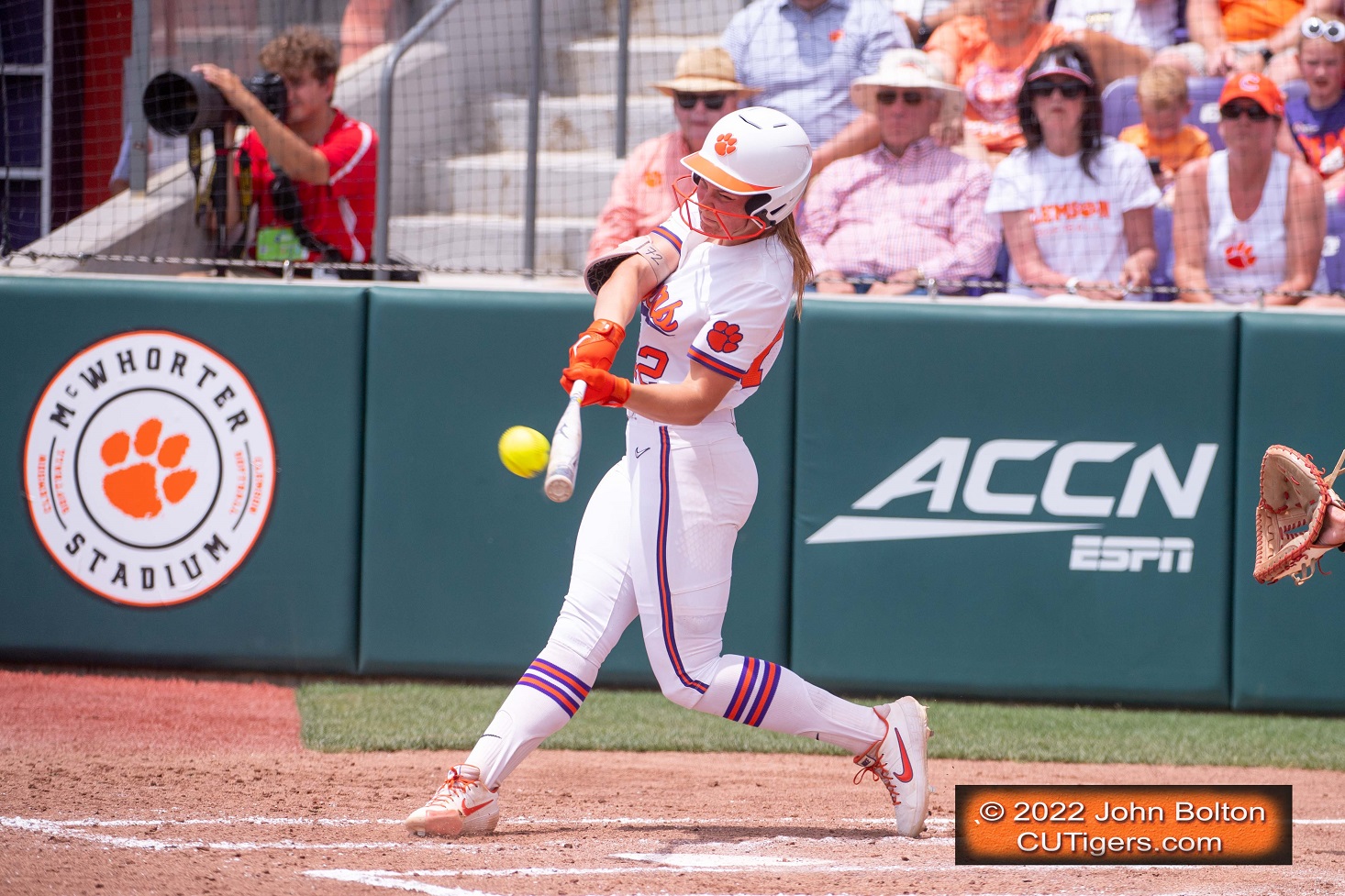 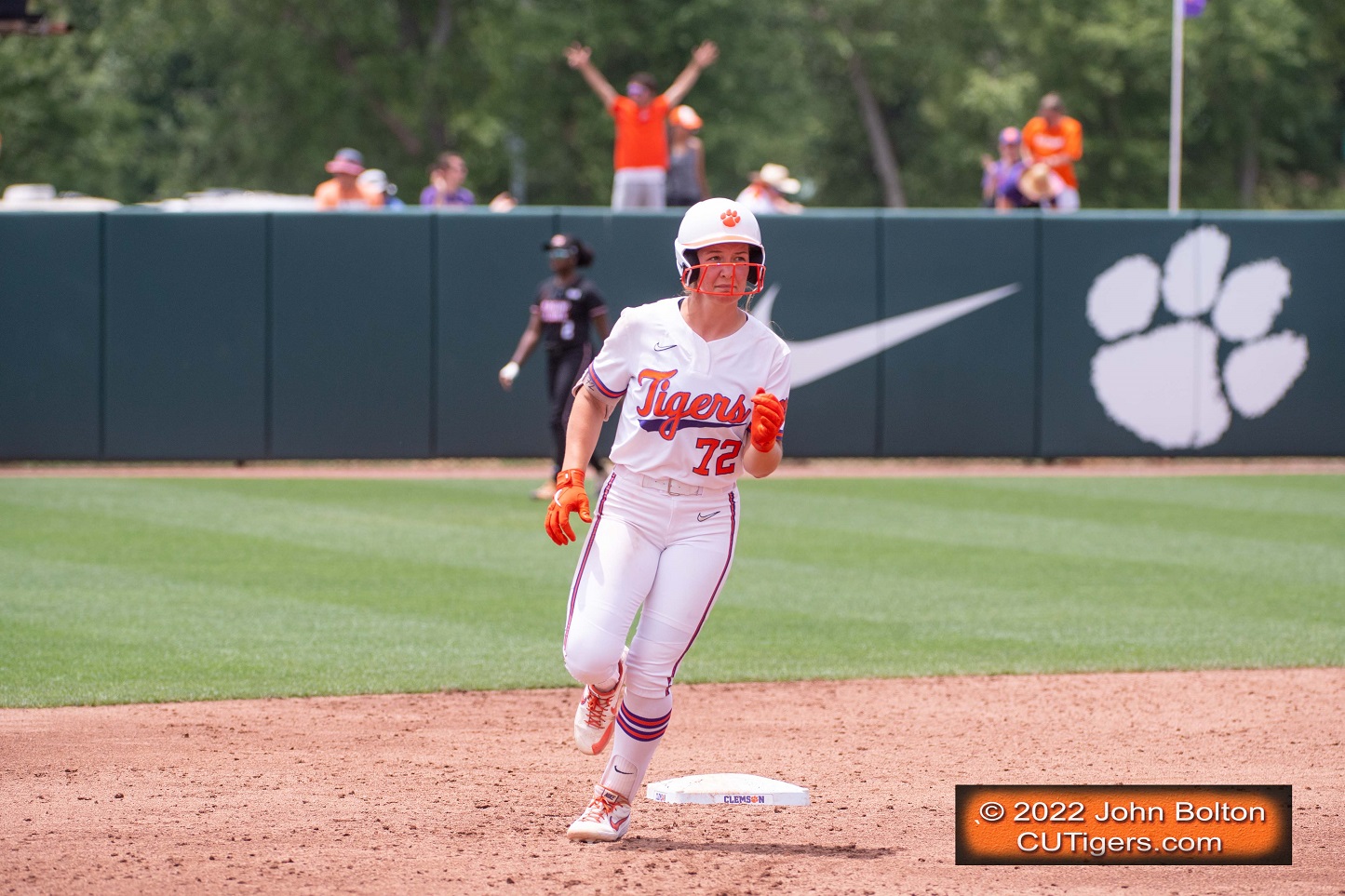 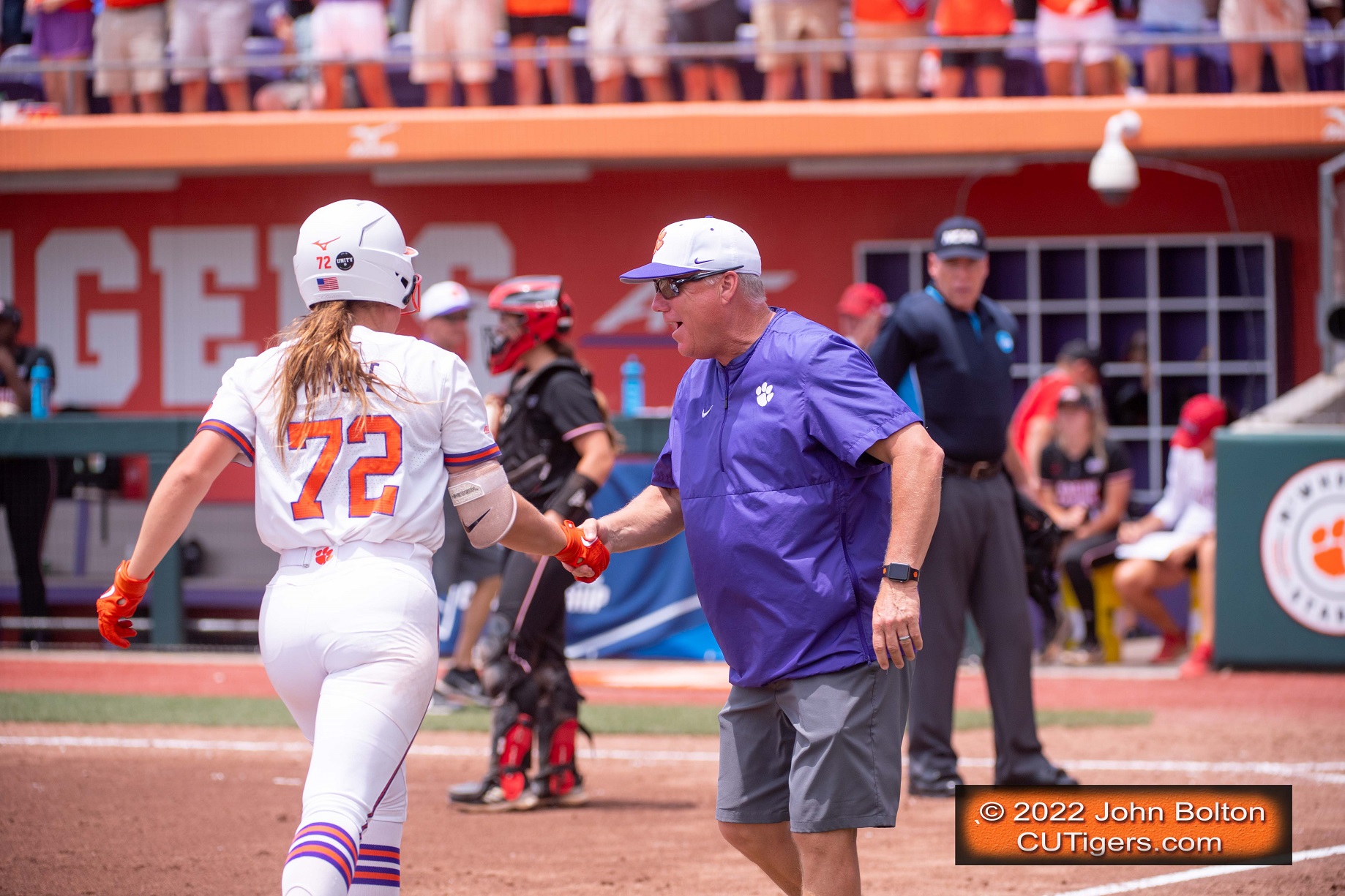 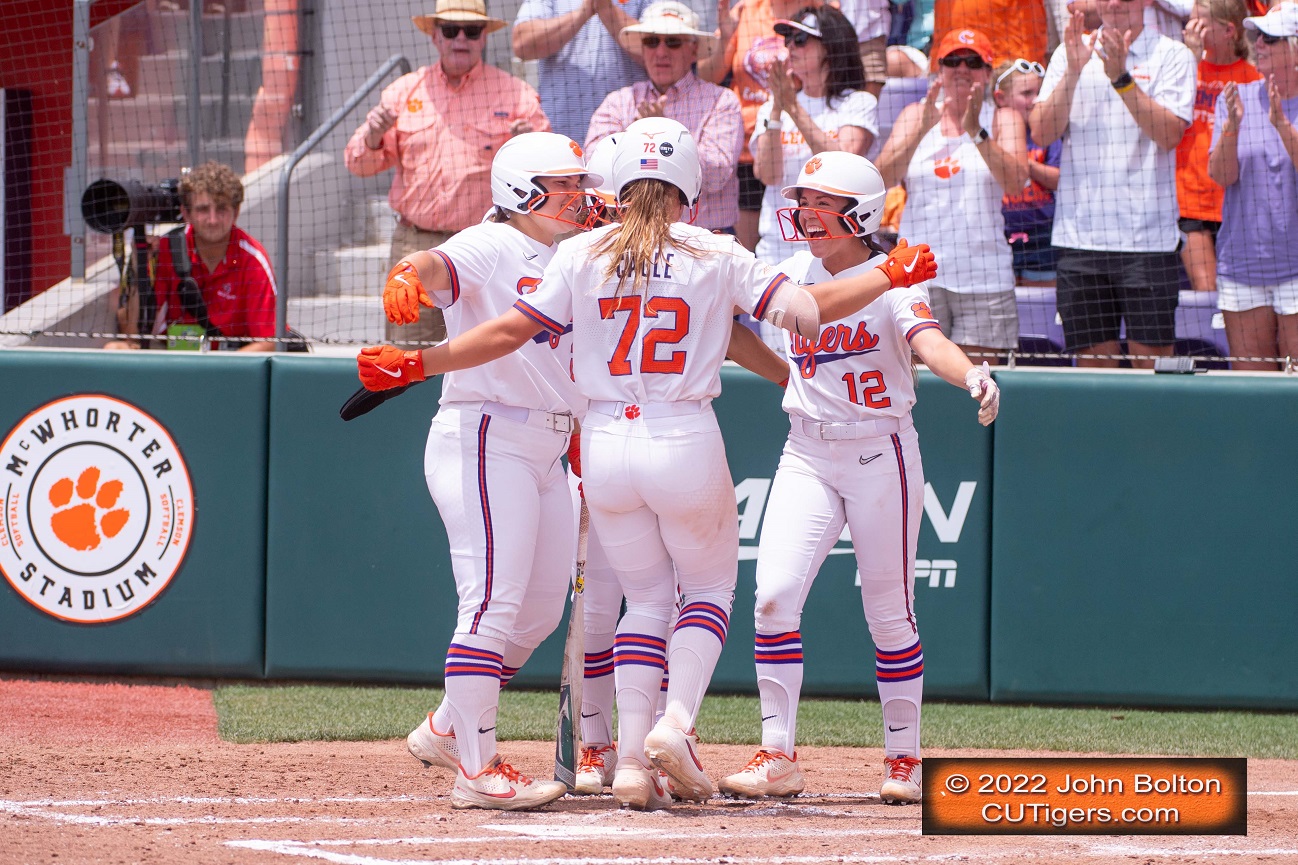 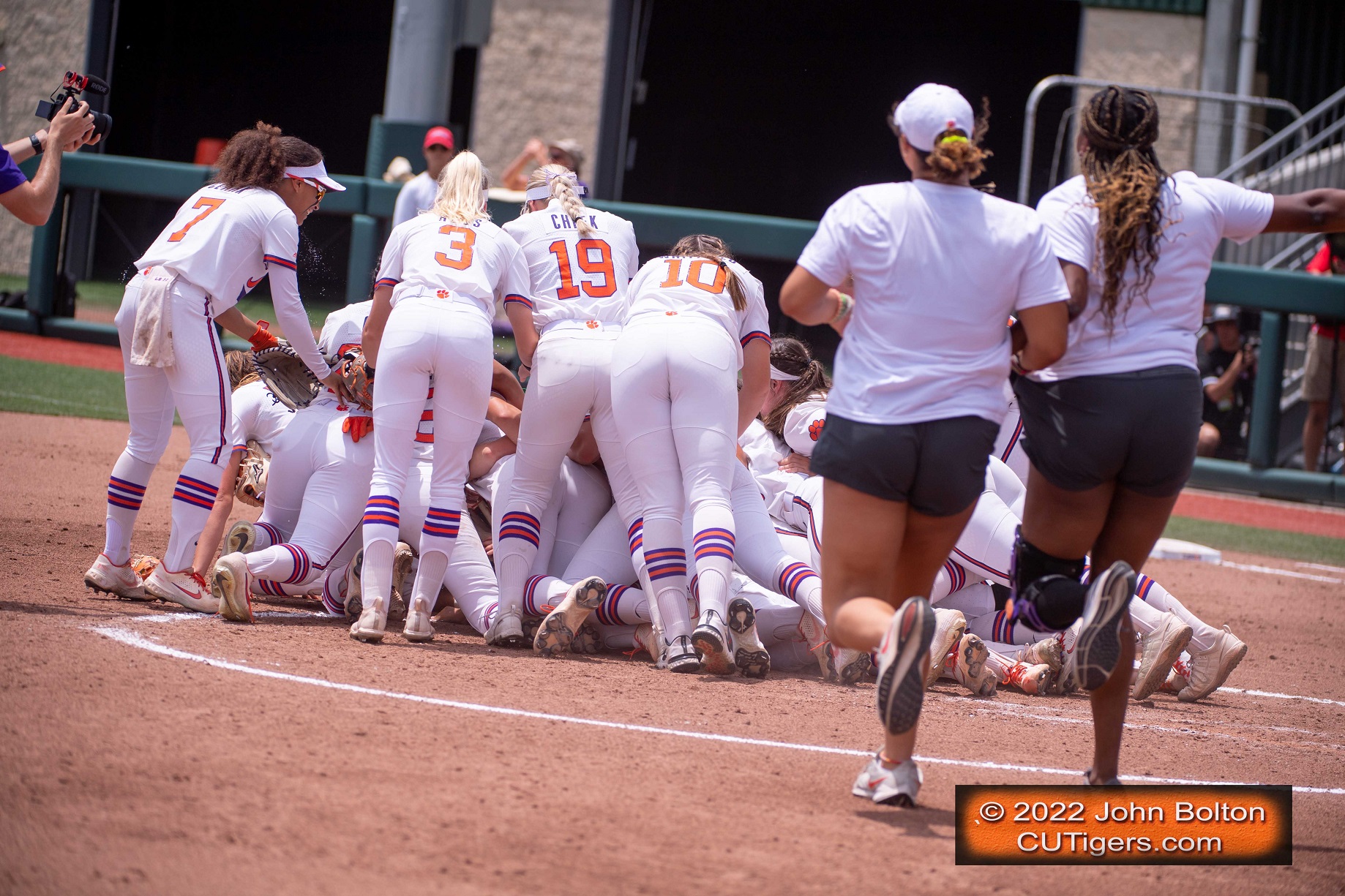 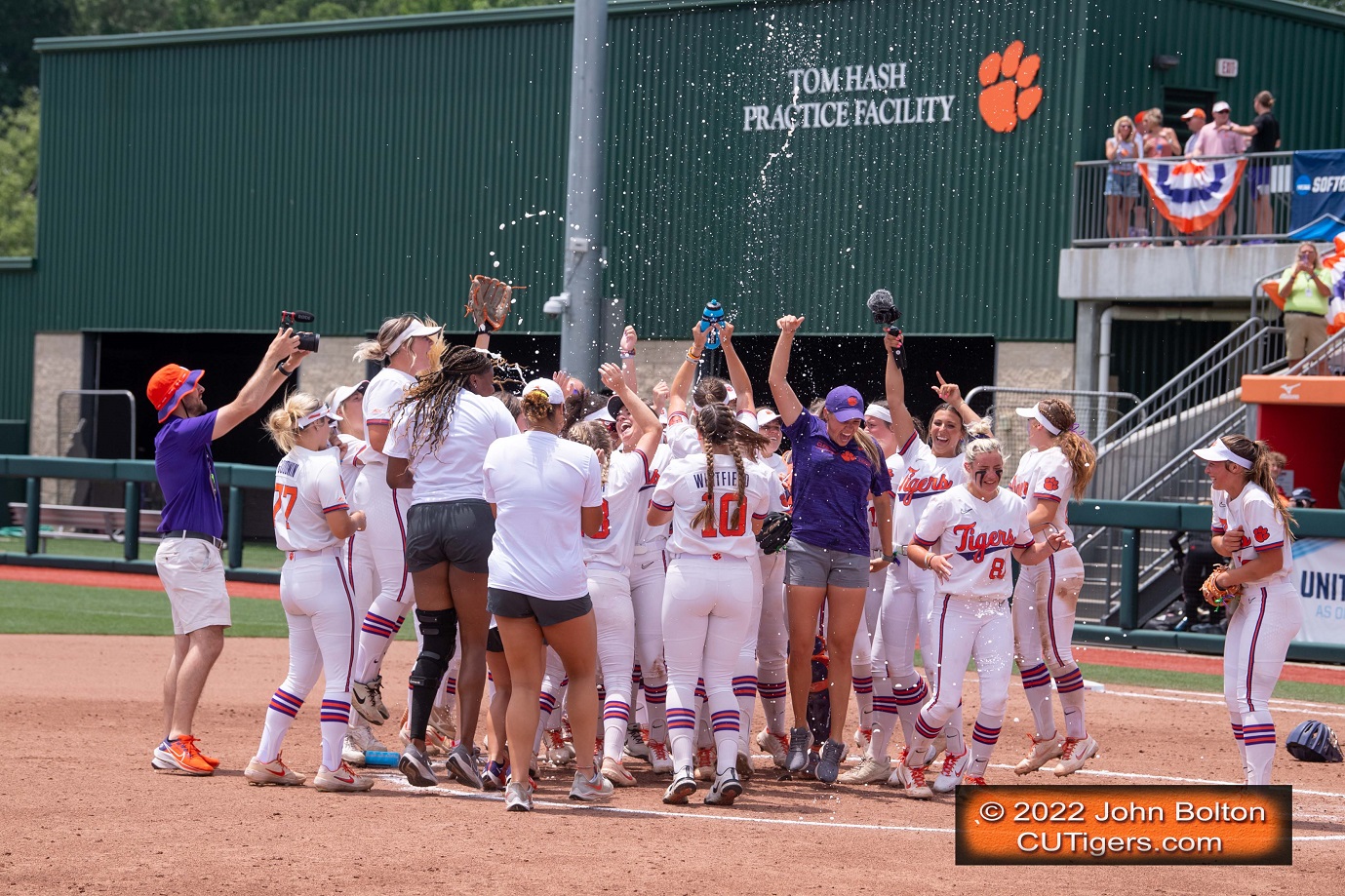 It was quite a celebration at McWhorter Stadium, and a great scene watching Rittman get his first Clemson Gatorade bath, the players dog piling on the infield and then joyously running through the sprinklers in the outfield. The emotions were exactly the opposite one year ago, when they were forced to watch Alabama celebrate as the Tigers' season came to an end. I'm sure the returning players held those emotions with them for the last year, and now their hard work and determination has been rewarded! 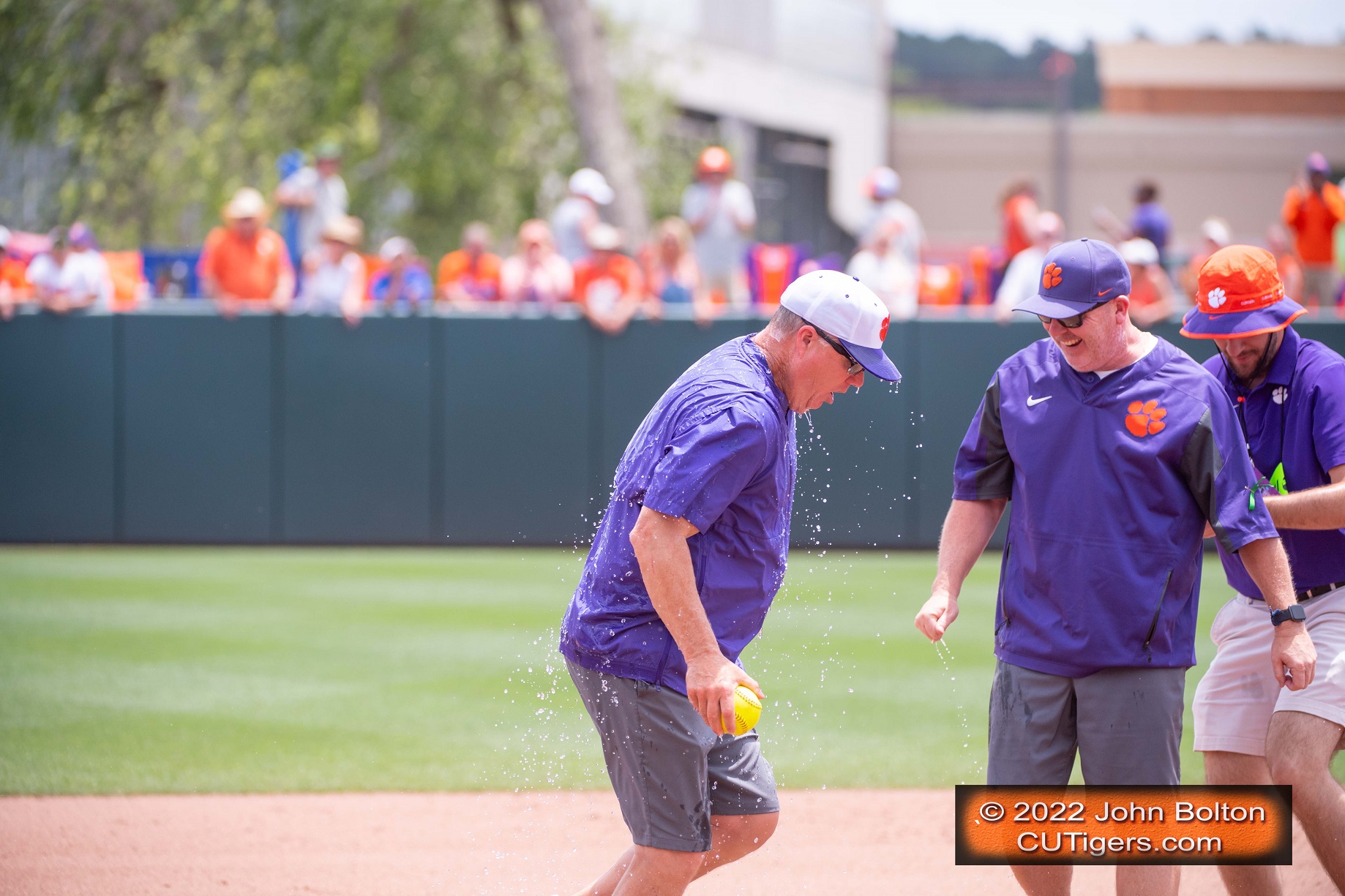 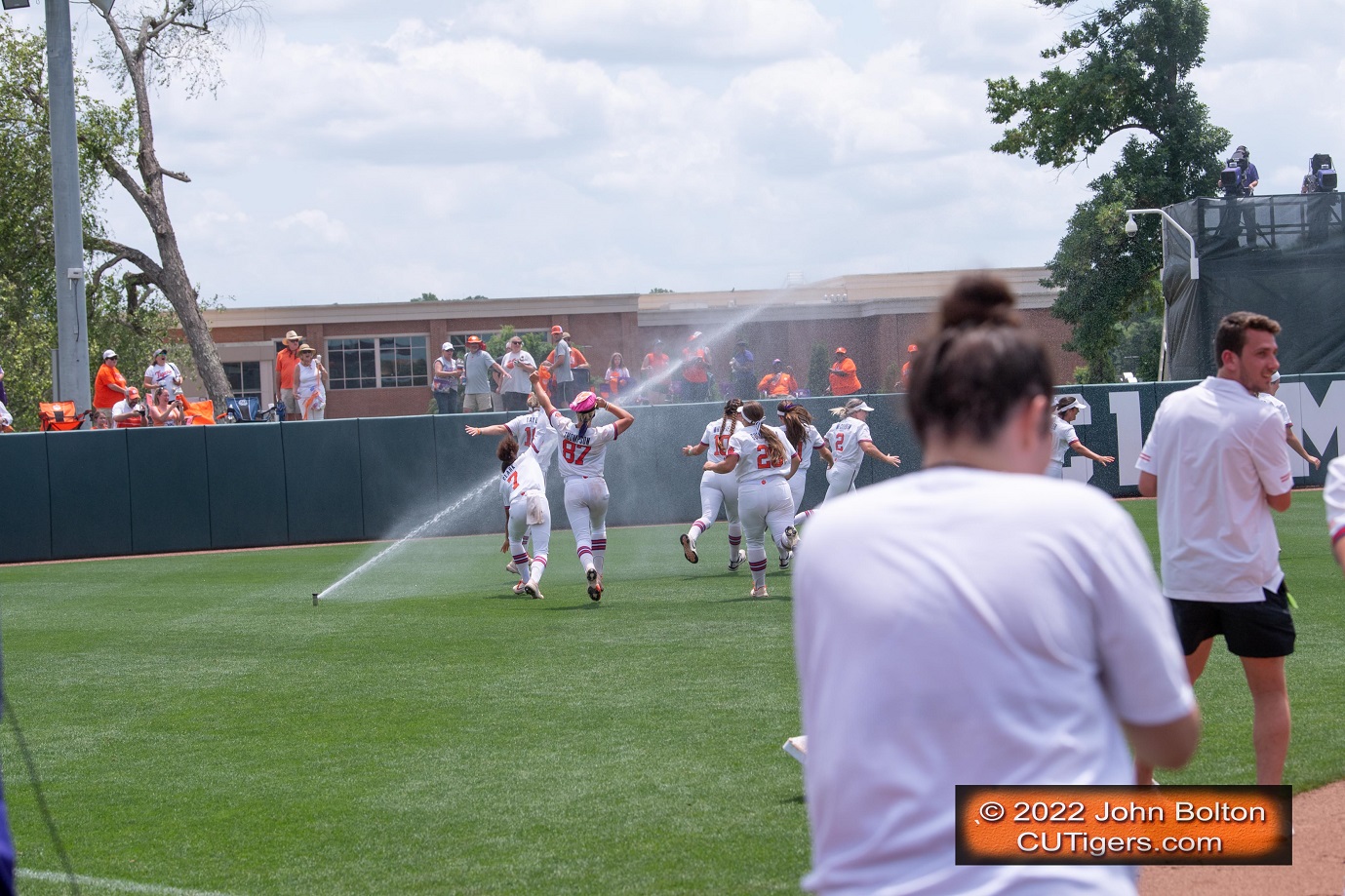 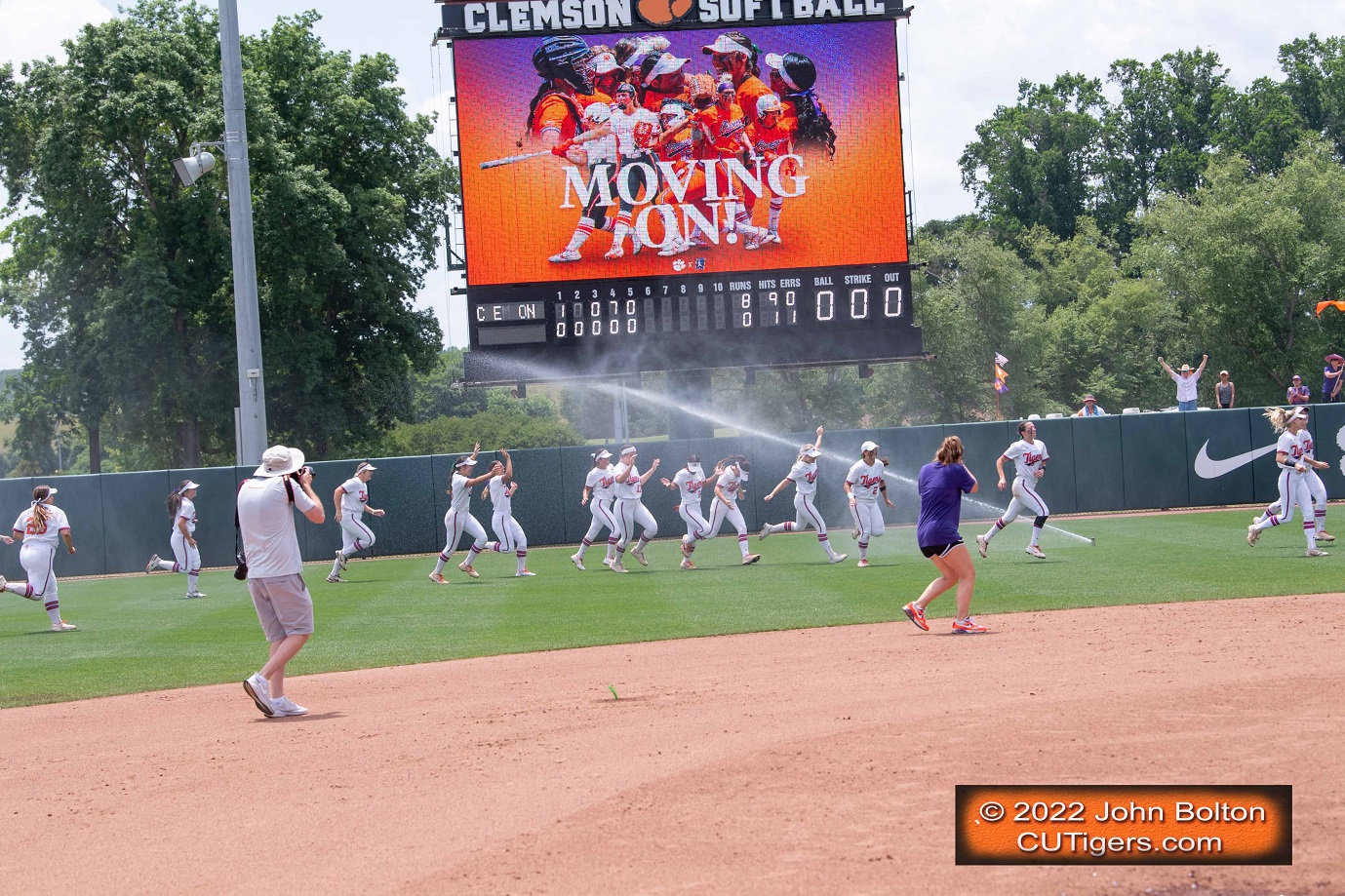 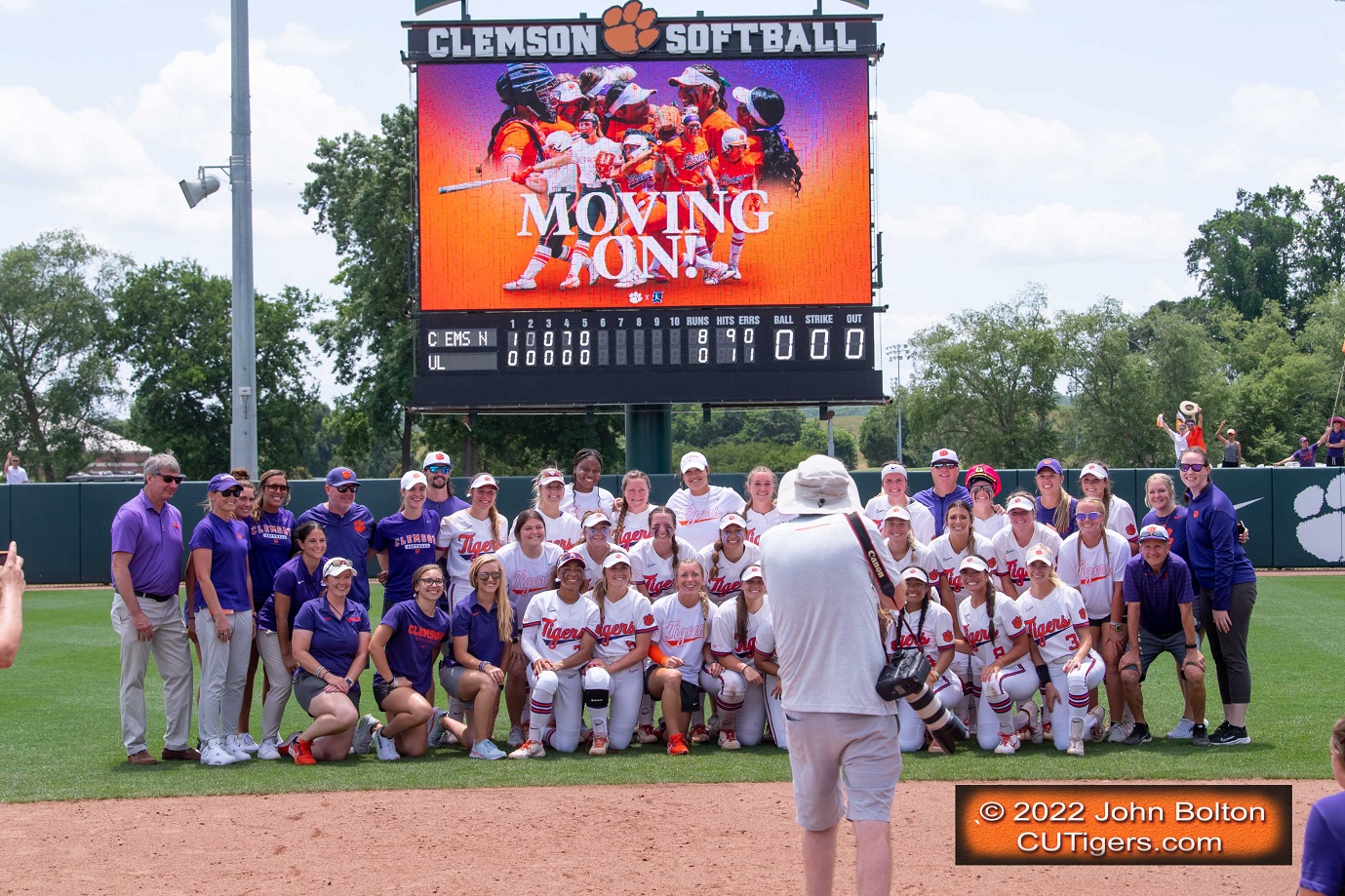 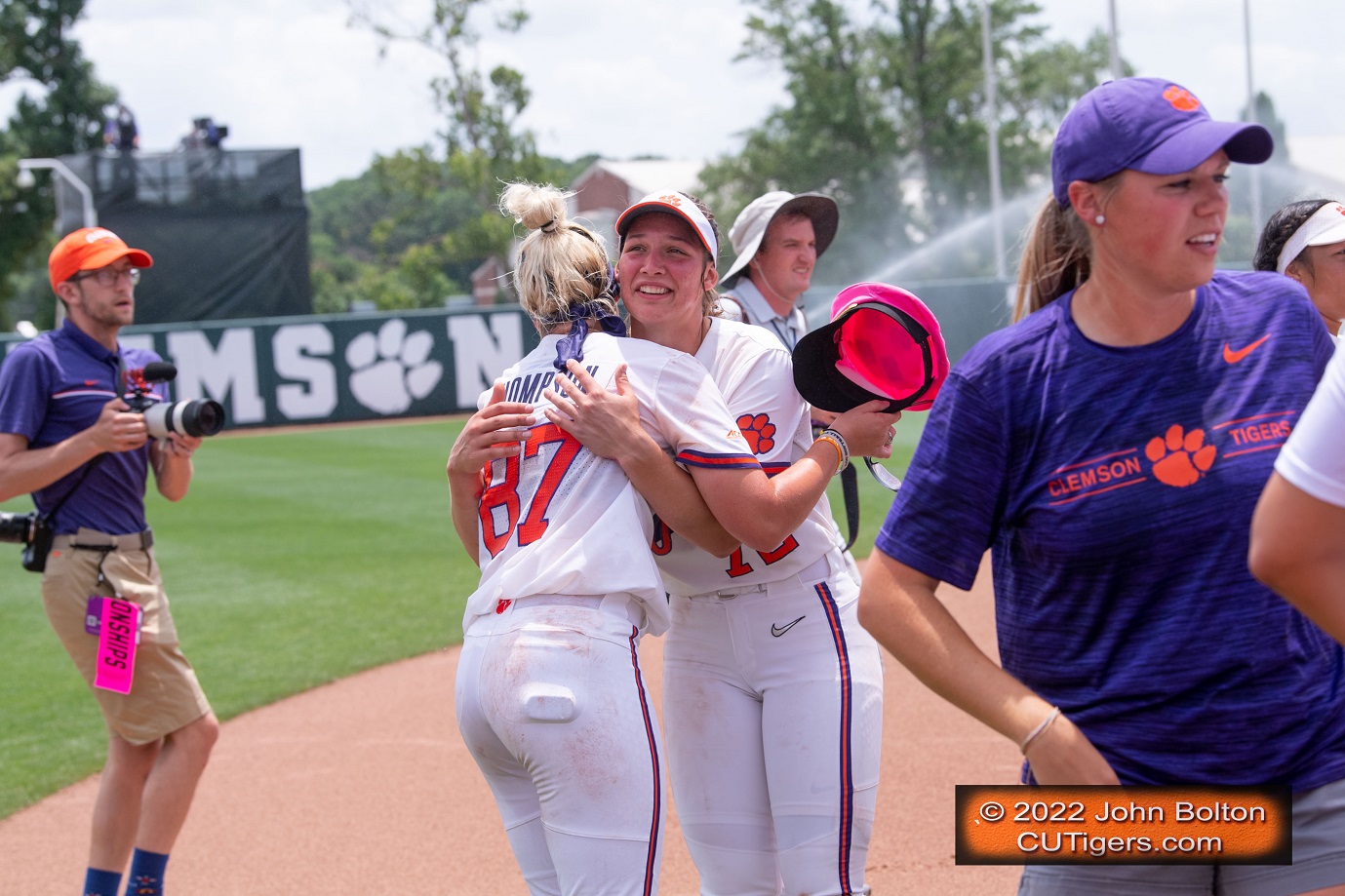 The Tigers will face the winner of the Stillwater Regional. If host No.7 Oklahoma State wins, the Tigers will travel to Stillwater next weekend. If North Texas upsets OSU, the Tigers will get to stay right here and host their first Super! Either way, this Clemson team is as hot as can be and clicking on all cylinders. The Tigers can win with offense, or they can win with pitching and defense. They knocked off No.2 VA Tech away from home last week and nearly beat No.3 FSU, so they have all the confidence in the world that they can beat anyone and go all the way.
Post-game interviews are below!
MORE CLEMSON SOFTBALL, BASEBALL AND FOOTBALL COVERAGE HERE