CLEMSON LOSES TO UNC 9-2 IN ACC TOURNAMENT OPENER, WILL NOT ADVANCE TO SEMIFINAL 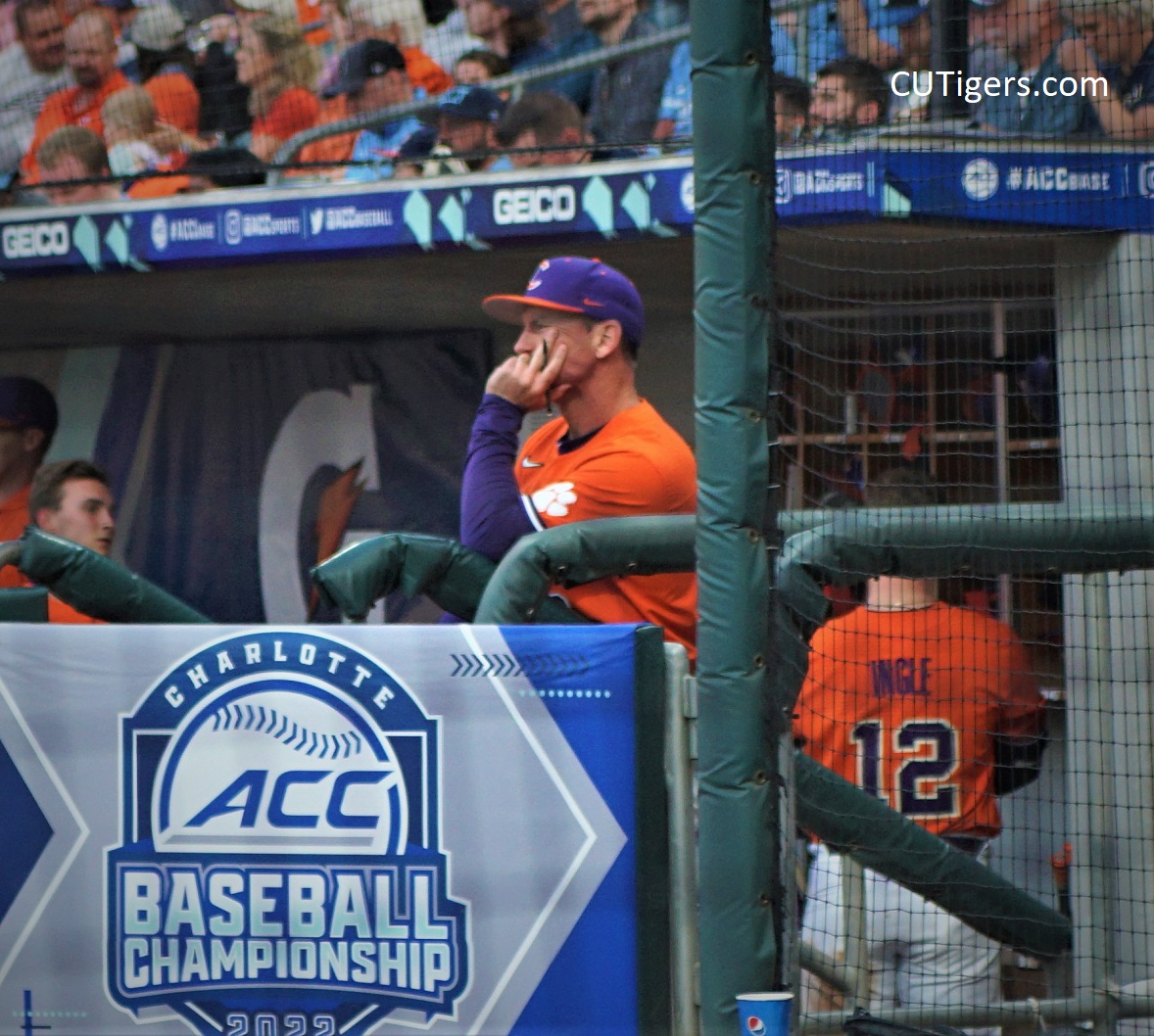 CHARLOTTE, NC - This is why I don't like the pool play format adopted by the ACC a few years ago, and I know Monte Lee hates it as well. Lose the opener, and you're automatically out if you are not the high seed in your pool. I prefer a double-elimination format because, as we all know, any team can beat any team on a given night in baseball. That being said, the Tigers went into the ACC Tourney with their eyes open, knowing they could punch their ticket to the NCAA Tournament with a couple wins over UNC and VA Tech--two teams that the Tigers had not faced this season--and that anything short would significantly hurt their chances.
Friday night starter Mack Anglin had been solid most of the season and was outstanding at home against Boston College last weekend, but on short rest, he looked more like the Anglin that gave up 7 runs in 3.2 innings at UVA a couple weeks ago. He lasted just one more out in this one, again allowing 7 runs on 7 hits, 4 walks and one HR. I'm not sure why Monte waited as long as he did to pull Anglin, other than the fact that he has no confidence in his bullpen. When he finally did replace Anglin, the relievers did a pretty good job. Dill, Olenchuk, Lindley, Gordon and Ammons combined to allow just 2 runs and 4 hits with no walks.
Unfortunately, the Tigers' bats were ice cold. Either that or Max Carlson is a much better pitcher than his season stats would indicate. Perhaps there is an ACC Player of the Year curse similar to the Heisman curse because Max Wagner had his worst game of the season the day after he received the award. He was 0-4 with 4 K's and a walk, including a strikeout to end the game with 2 runners on base. Carlson only had 4 K's in 6 innings, but 3 of them were at the other Max's expense. In many games this season, the Tigers' offense has looked to be unstoppable, but we have also seen them struggle at times, like the midweek game at Coastal last Tuesday, and it seems like more often that not, the pitching lets them down when runs are hard to come by.
The Tigers were in this same situation last year, losing their first game of the ACC Tournament, and they bounced back to beat Georgia Tech. Unlike last year, though, the Tigers have more incentive than just ending the season on a positive note. A win over No.2 VA Tech will certainly give them a chance for an at-large NCAA bid. In my opinion, they would deserve an NCAA bid if they upset the Hokies. It would be their 6th win over a top-10 team this season and 14th win over a ranked team. And their RPI is already No.30! Unfortunately, the Selection Committee will probably not see it that way. They will just decide that they can't give 11 bids to the same conference, no matter how deserving those teams might be.
It's a moot point if the Tigers lose on Thursday night, so hopefully their bats will wake up! It will also be worth watching just to see if Wagner can tie or break National Player of the Year Khalil Greene's Clemson single-season HR record. Wagner has 26 HR's, just 2 short of the nation's leader, Ivan Melendez of Texas. I expect to see Geoffrey Gilbert on the mound for the Tigers.
My post-game interviews with Monte and Blake Wright are below!
MORE CLEMSON BASEBALL, SOFTBALL AND FOOTBALL COVERAGE HERE