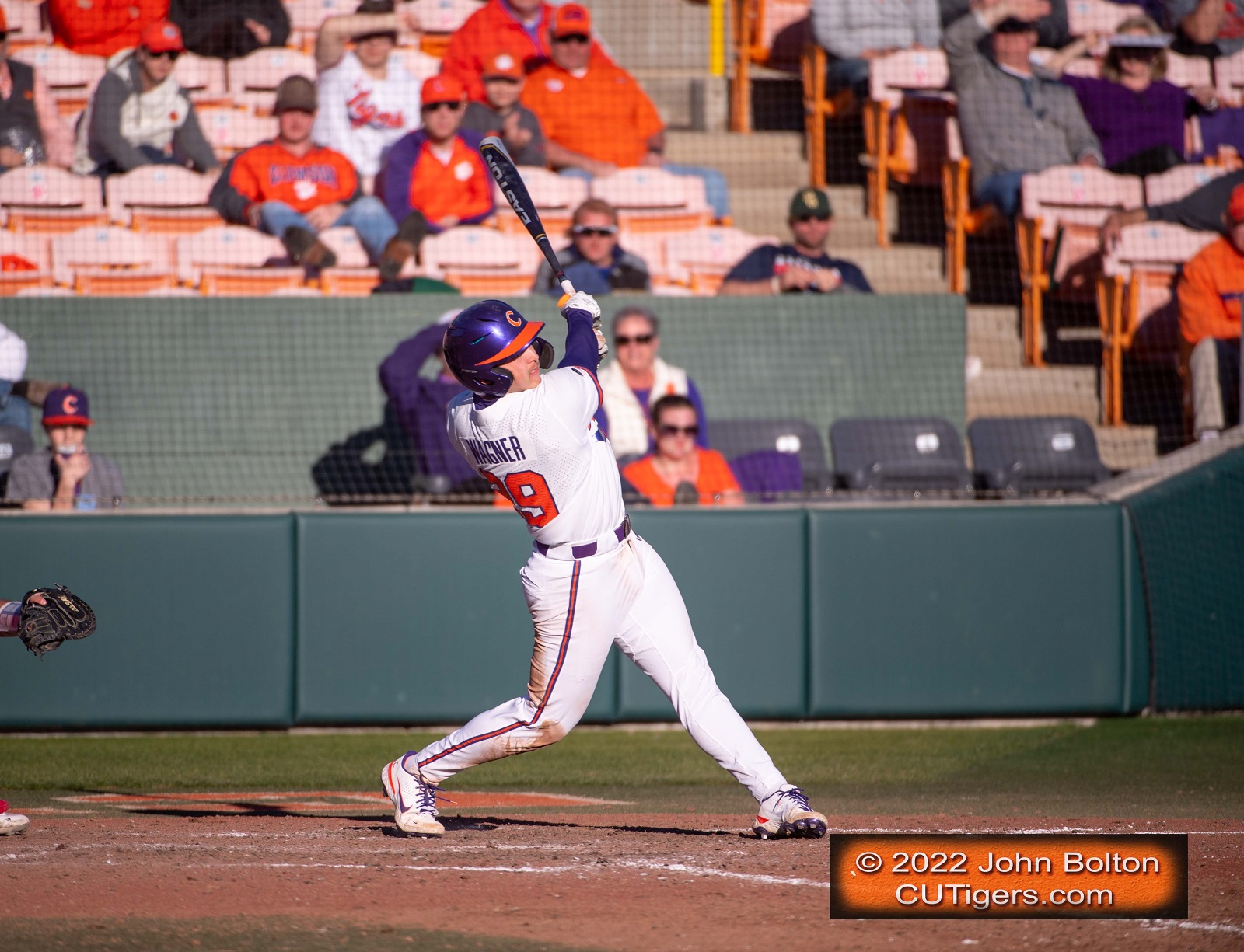 CHARLOTTE, NC - ACC Player of the Year Max Wagner bounced back from his 4-strikeout game against UNC on Tuesday night and made history with his third-inning 2-run HR, but he and the Tigers would have much rather finished the ACC Tournament (and perhaps their season) with a win over No.2 Virginia Tech. Wagner's 27th HR of the season tied National Player of the Year Khalil Greene's Clemson single-season record, but with the 18-6 loss, the Tigers have likely played their way out of an NCAA bid. They were ranked No.30 according to RPI heading into the ACC Tournament and could have secured an NCAA at-large bid by beating UNC and VA Tech--or perhaps just the Hokies--but losing both games by wide margins has likely sealed their fate despite 13 wins over ranked teams this season, including 5 over top-10 teams.
The Tigers were undone again by their pitching, which has been their downfall in most of their losses over the course of the season. I thought Monte would start Gilbert, who had won his last 2 starts, including at No.9 UVA, but he instead went with freshman Billy Barlow, who has been the Sunday starter over the last month or so. Like Anglin on Tuesday, Barlow got off to a dreadful start, walking the leadoff man in each of the first two innings and giving up 5 runs in 2.2 innings before leaving the game in the 3rd. I thought Monte might bring Gilbert in from the pen to relieve Barlow, but instead Gordon came in and gave up a walk, a single and 3 straight homers to make it 10-2. Wagner's 2-run HR in the 3rd made it 10-4, and freshman Camden Troyer hit his 2nd career HR to make it 10-6 in the 4th, but that's as close as the Tigers would get.
After Lindley gave up a run and loaded the bases with one out in the 5th, Gilbert finally came in and walked in a run but did a good job to get them out of the inning, and he struck out the side in the next inning. However, he would give up 2 more runs in the 7th, and closer Ryan Ammons gave up 4 runs in the 9th. The Hokies scored 8 unanswered runs after the Tigers cut the deficit to 4.
It will likely be the second straight year that the Tigers will miss the NCAA Tournament, and Monte Lee's job is in serious jeopardy. It was a strange season because the Tigers did some historically great things, such as starting 14-0 and sweeping both UGA and South Carolina for the first time in 50 years. But the ACC was the toughest it's been in history, with 12 of the 14 teams ranked during the season, and the Tigers arguably had the most difficult schedule in the nation.
The interesting thing is that Graham Neff just took over as Athletic Director a little over 3 months ago, and Monte Lee was the biggest hire with which Neff was involved as Deputy AD. Dabo, Brownell and Soccer Coach Mike Noonan were all hired by Terry Don Phillips, but Neff's predecessor, Dan Radakovich, hired Monte Lee prior to the 2016 season. I have to wonder if the 38-year-old Neff is ready to make such a big fire and hire so early in his tenure as AD. If Monte does retain his job for another season, we might see him let go of Pitching Coach Andrew See, who has held the position since Monte's first season at Clemson.
I'll keep you posted on everything I'm hearing and what transpires, so click on the link below for all the latest developments!
MORE CLEMSON BASEBALL, SOFTBALL AND FOOTBALL COVERAGE HERE