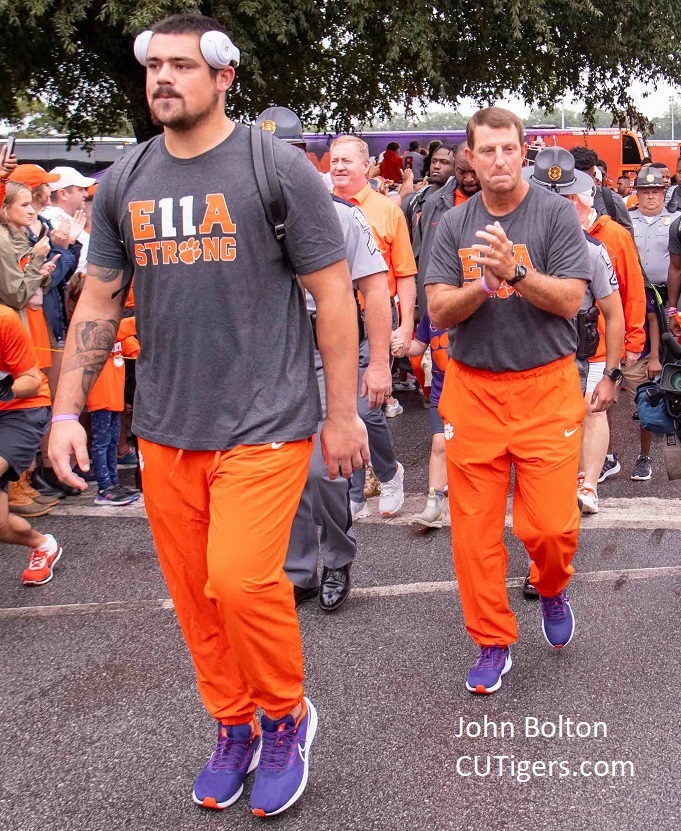 
AN EARLY LOOK AT NO.4 CLEMSON vs. LOUISIANA TECH

The first time Clemson and Louisiana Tech faced each other, it was cold, wet, snowy and roughly 2,300 miles from each school's campus.  That meeting took place on New Year’s Eve 2001 at the Humanitarian Bowl in Boise, Idaho on the blue "Smurf Turf" of the Boise State Broncos. Woody Dantzler and the Tigers won that meeting 49-24, and the two teams have met twice since, in 2002 and 2006. It has been 16 years, and a lot has changed for both programs. The Bulldogs have managed to stay off the Tigers’ radar, but that changes this weekend when the two teams meet at Memorial Stadium for just the fourth time in history.
Clemson has won all three meetings by a combined score of 133-37. If the Tigers hadn't exploded for 28 unanswered points in the 3rd quarter of the bowl game, we could easily be talking about a 2-1 series, as LA Tech outscored the Tigers 24-21 in the other 3 quarters. Look for the Tigers to continue this small streak against the Bulldogs, but don't expect it to be a cake walk in the meantime.
New Head Coach Sonny Cumbie is a disciple of Mike Leach’s Air Raid offense, so the Tigers’ defense will see receivers spread all over the field and plenty of passing. Cumbie played quarterback for Leach at Texas Tech before a brief career in the NFL, and he got his coaching start for Leach as a GA at his alma mater. He was the offensive coordinator for a prolific TCU offense before returning to Texas Tech, where he was the interim head coach last season.
The defense for LA Tech is still a work in progress, giving up 558 total yards against Missouri and 52 points. Defensive Coordinator David Blackwell loves to be aggressive, especially up front, but it’s a gamble that didn’t pay off against Mizzou. If you recognize the name, by the way, that’s because Blackwell, a native of Greenville, was the Tigers’ LB Coach from 2003 to 2008 under Tommy Bowden.
For the Tigers, there are still some uncertainties on both sides of the ball. Offensively, it has been hit and miss. It took almost 3 quarters before the offense got rolling against Georgia Tech. In the Furman game, the offense was rolling in the first half, scoring on its first 5 possessions, but the offense disappeared in the 2nd half.
On the defensive side of the ball, the Tigers have allowed just 11 points per game so far, but it's the damage in between the 20’s last week against Furman that is a concern. The Tigers gave up 3.6 yards per play against Georgia Tech and dominated on 3rd down, allowing just 2 conversions in 16 attempts. However, they gave up 384 yards of total offense last week, and Furman had the ball almost 10 minutes more than the Tigers. The Paladins were also 10-18 on 3rd down, which is unusually successful against a Clemson defense.
What can we expect Saturday night? With the Tigers’ defensive performance last week, one might think Cumbie is salivating to test that defense with his Air Raid offense. They will stretch the field, and the Tigers defense will have plenty of opportunities to snatch the ball and head the other way. The Tigers already have two interceptions this season and nearly had a few more, including a pick-six that Wiggins dropped against Tech.
For the Tigers, it has already been a roller coaster of a week. With the passing of Brian Bresee’s sister on Thursday morning, the Tigers will be playing with heavy hearts but perhaps an edge as well. Include the anticipation of the LED light show and new DaboTron being unveiled at night for the first time, and that emotional roller coaster just got even more ramped up. Assuming Bryan Bresee will not play due to his sister's passing, the Tigers could be missing as many as three starters on the defensive line, as DT Tyler Davis and DE Xavier Thomas will be a game-time decision.
Don't expect too much from the Tigers this week, in my opinion. They should easily move to 3-0 on the season before heading to Wake Forest. With everything surrounding this game, look for the Tigers to play through the emotions, but the game itself might be closer than the experts think, like 10-14 points.
I will give the Tigers a free pass this week, and that's alright. After all, and Dabo said it best, there are just some things that are more important than football. In the meantime, we will just have to wait another week to get more clarity from this Clemson team when they go on the road to play No.18 Wake Forest.
Don’t forget to check back on Friday for Trevor’s more comprehensive preview and prediction of the game, in his weekly What We Are Hearing!
MORE CLEMSON FOOTBALL COVERAGE HERE