DJ PLAYS GAME FOR THE AGES AS NO.5 CLEMSON WINS DOUBLE-OVERTIME THRILLER 51-45 AT NO.16 WAKE FOREST 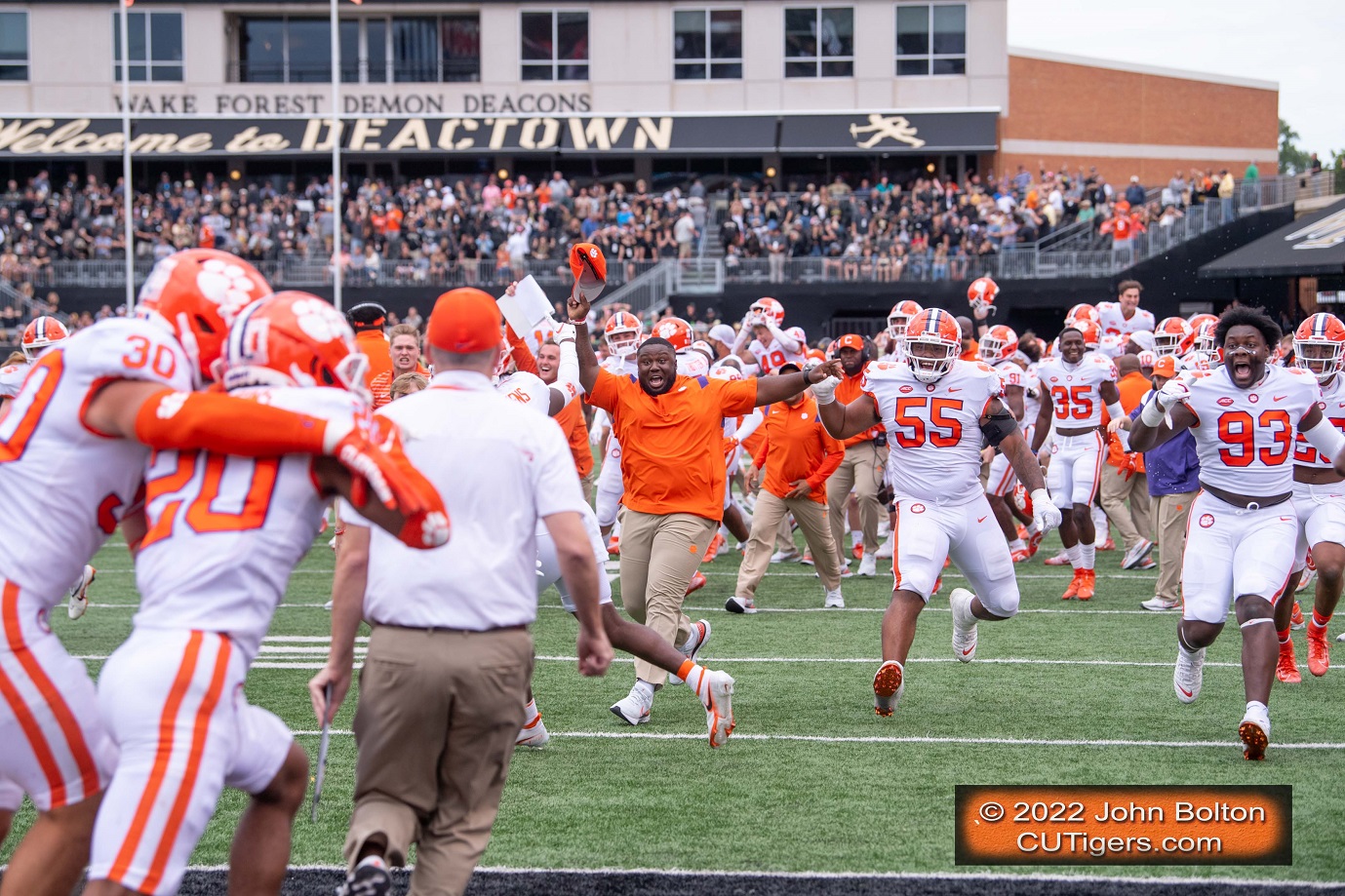 WINSTON-SALEM, NC - What a game! An instant classic to be sure. I was standing about 15 feet away from Nate Wiggins when he knocked down Sam Hartman's pass to win the game in double-overtime, and the emotion from the players and the large contingent of Clemson fans located in that corner of the end zone was palpable. Wiggins had the worst game of his career, as did the entire secondary, so it was fitting that he should get some redemption with the game-winning play. As soon as I saw Hartman release the pass, I thought to myself, "Uh-oh, hear comes a pass interference call." However, Wiggins and Mickens were in good coverage, bracketing Wake's star receiver Perry in the end zone, and Wiggins came up with the PBU. He laid face down after the play, either upset that he didn't hold on for the interception or emotionally spent and relieved that they had won, but his teammate picked him up, and the celebration was on! 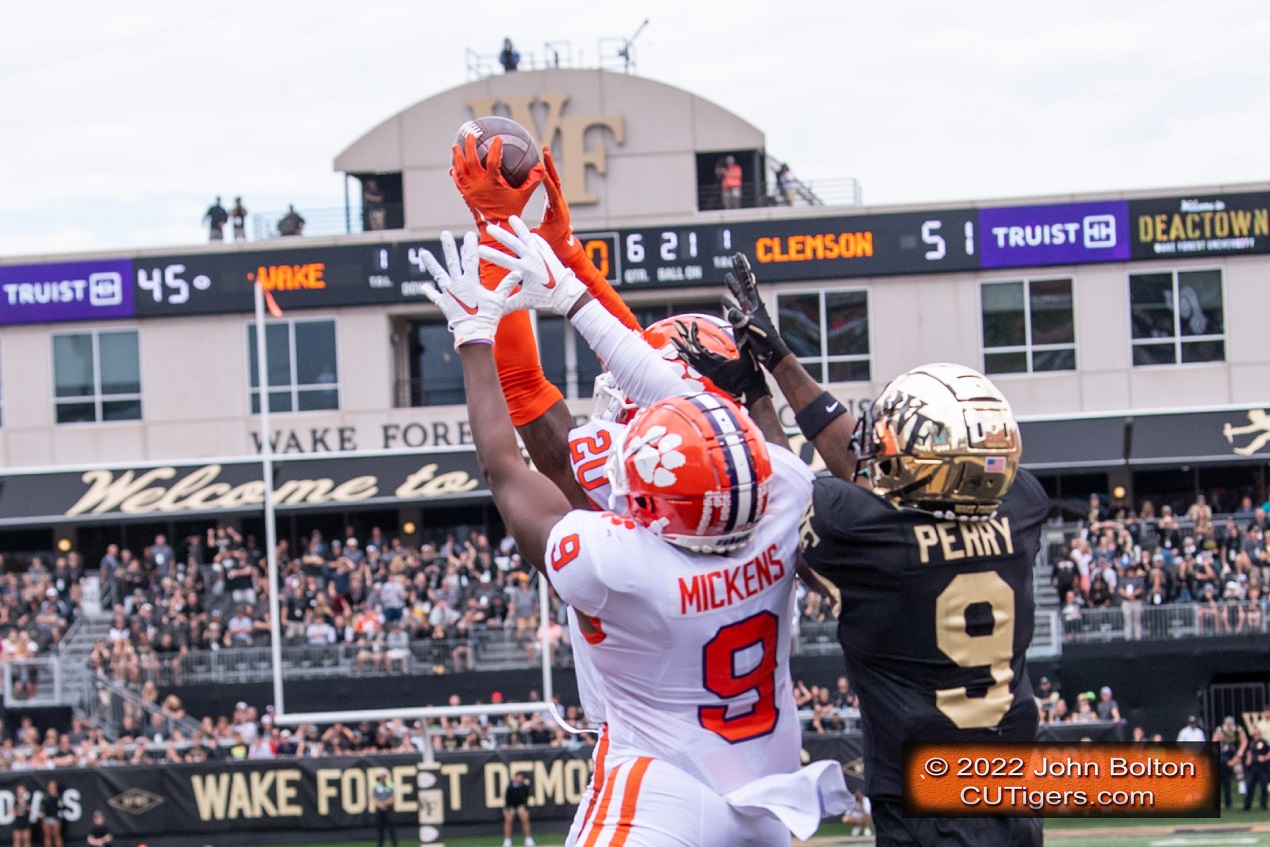 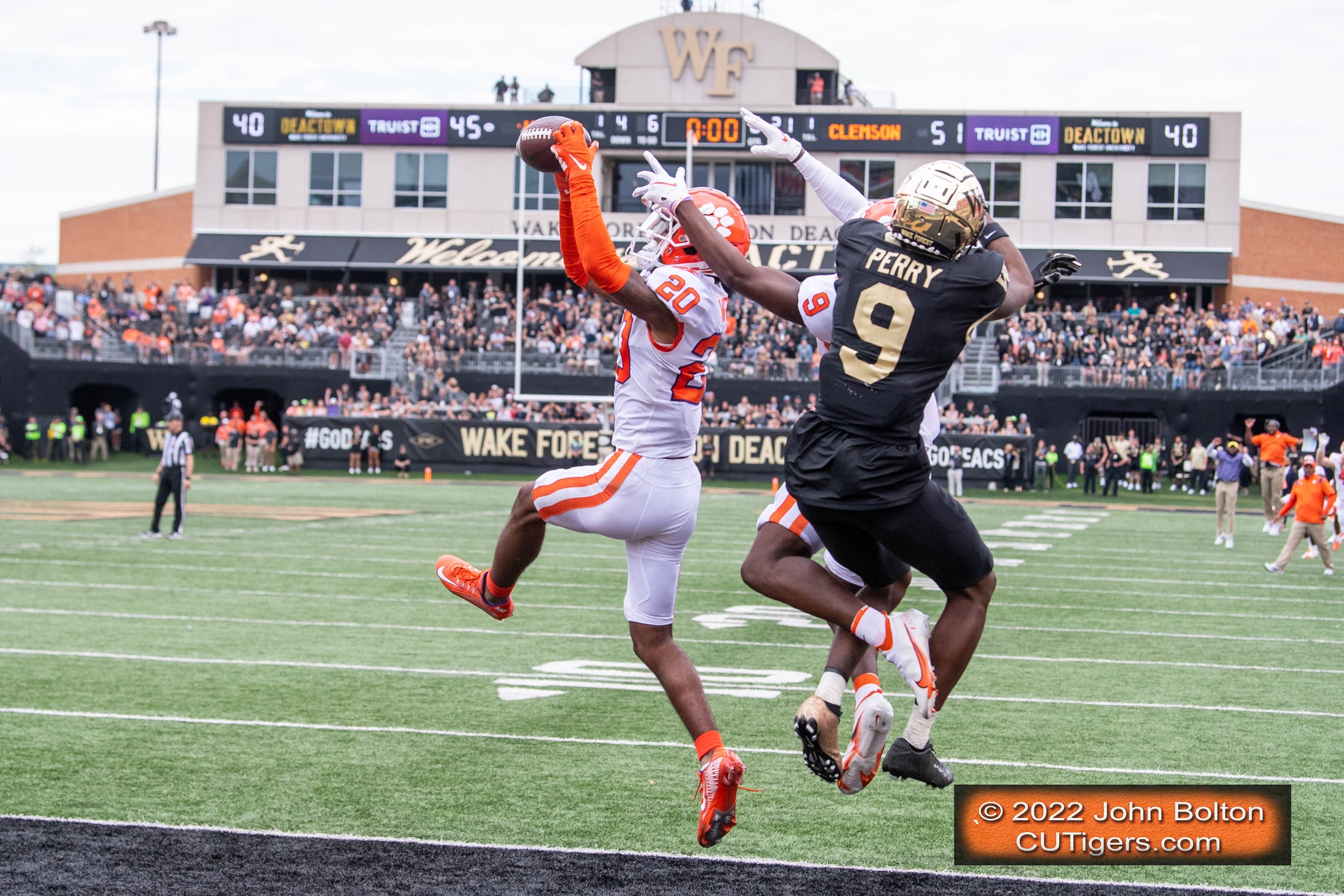 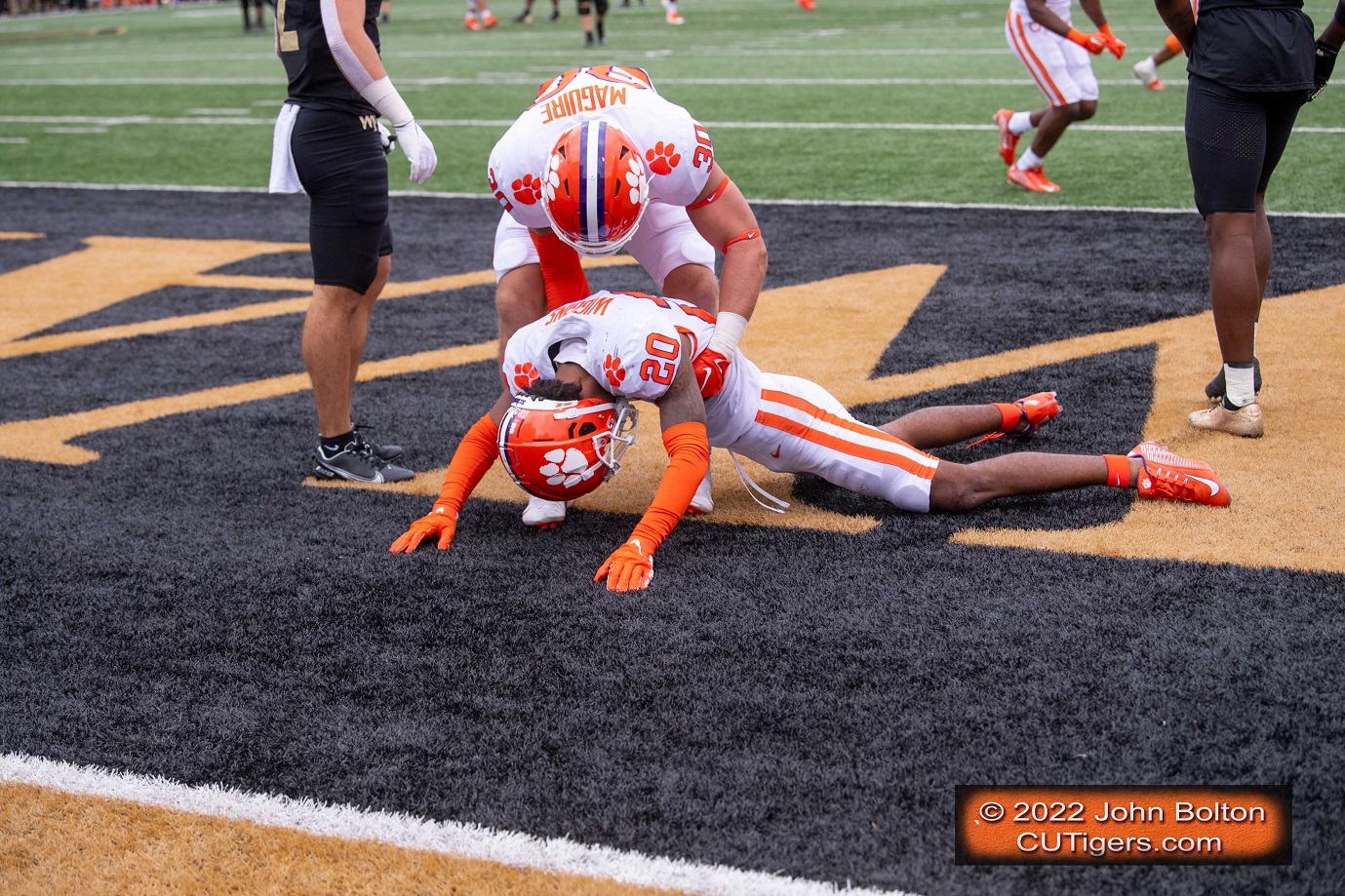 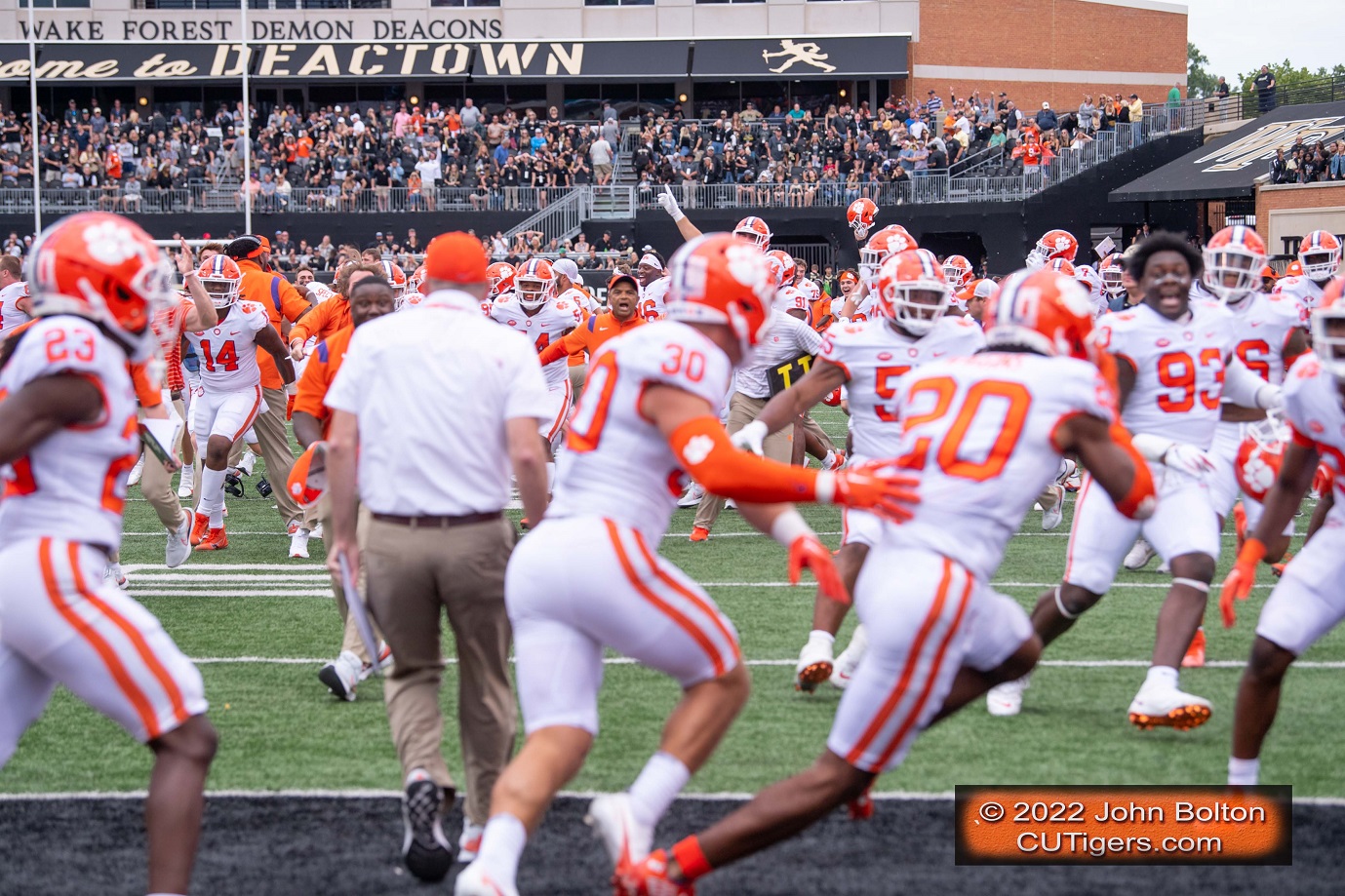 The story of the game for me was not how badly the corners played but that DJ--whose consistent progress and improvement I've documented over the first 3 games--played one of the best games you'll ever see by any quarterback! Ironically, so did his counterpart, Sam Hartman. They combined for 11 touchdown passes and 708 yards with no interceptions! And the Tigers had recorded 3 interceptions in their previous game. It was an amazing back-and-forth shootout between dueling quarterbacks to see which one would flinch first. But everyone expected as much from Hartman. He is a fifth-year starter and was one of the best quarterbacks in the nation last year. For DJ to have all that pressure on him--knowing that the defense was struggling and he was going to have to answer Hartman blow for blow--and totally answering the bell with one phenomenal, clutch pass after another? Wow! This was an even more impressive performance than the record-setting one he had in South Bend as a freshman, setting the all-time passing record for Notre Dame Stadium. This was the DJ I've been waiting over a year to see and that many Clemson fans did not believe existed. I'm sorry to say that even members of my own family suffer from "DJ bias." The DJ haters are so traumatized from the "horrible" 10-3 season last year and want Cade to be the starter so badly that they are completely blind to all the great plays DJ has made this season and that he is a thousand percent better than he was this time last year. And the worst part is that if anyone should have the fans pulling for him, it's DJ. He's been nothing but a class act since he was a freshman. When everyone in the world was on his back all last season, he never hung his head, pouted or lashed back at all the critics. And he never once blamed a single teammate even though there were plenty others to blame, including his receivers who dropped a record number of perfectly thrown passes. DJ just humbly kept his head down and kept working to get better. He made more than a half-dozen throws today that would make Tom Brady envious, and several of them on 3rd and long and in overtime. He also had some great runs, including a handful of 3rd down conversions. The Tigers were an incredible 16-23 on 3rd down, and just about all of those conversions were either great passes or runs by DJ. He was 26-41 for 371 yards and 5 touchdowns with no interceptions! He has thrown just one interception in 4 games, and that wasn't his fault because it was a deflected pass. And for those DJ haters who will say, "He only completed 63 percent," let me point out to you that Tom Brady's NFL career completion percentage is 64 percent! That game-tying 2-point conversion pass DJ made to Beaux Collins while a defender was holding his left leg in the air? That was one of the most remarkable plays I've ever seen. If this were 2021, when DJ was given the third-best preseason odds to win the Heisman, we'd be talking about that play as a possible "Heisman moment!" Who knows, if this performance acts as a springboard for him and he puts up a few more games like this, he could play his way into the Heisman discussion. It's been a heck of a comeback for him so far, and Heisman voters love a good comeback story! 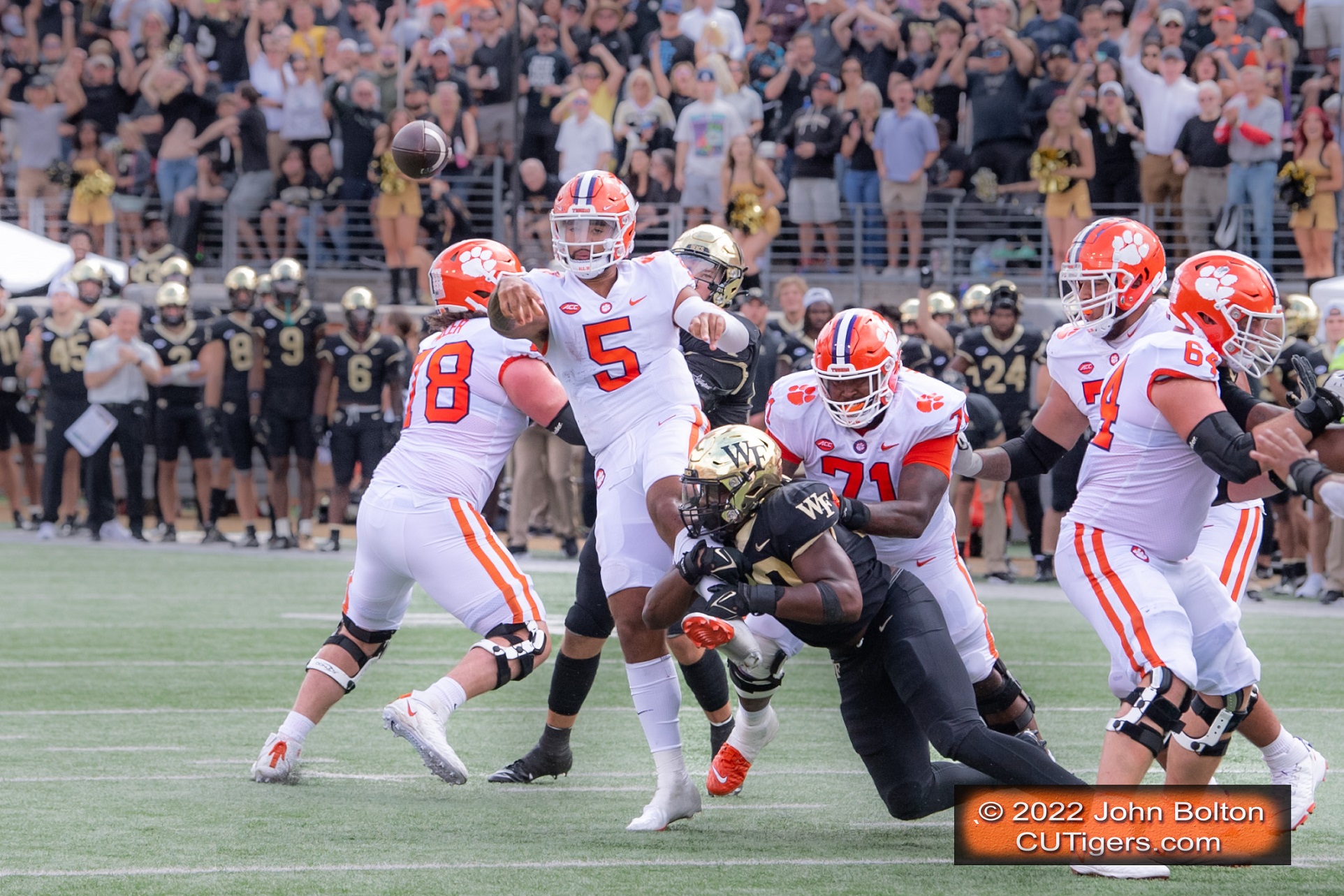 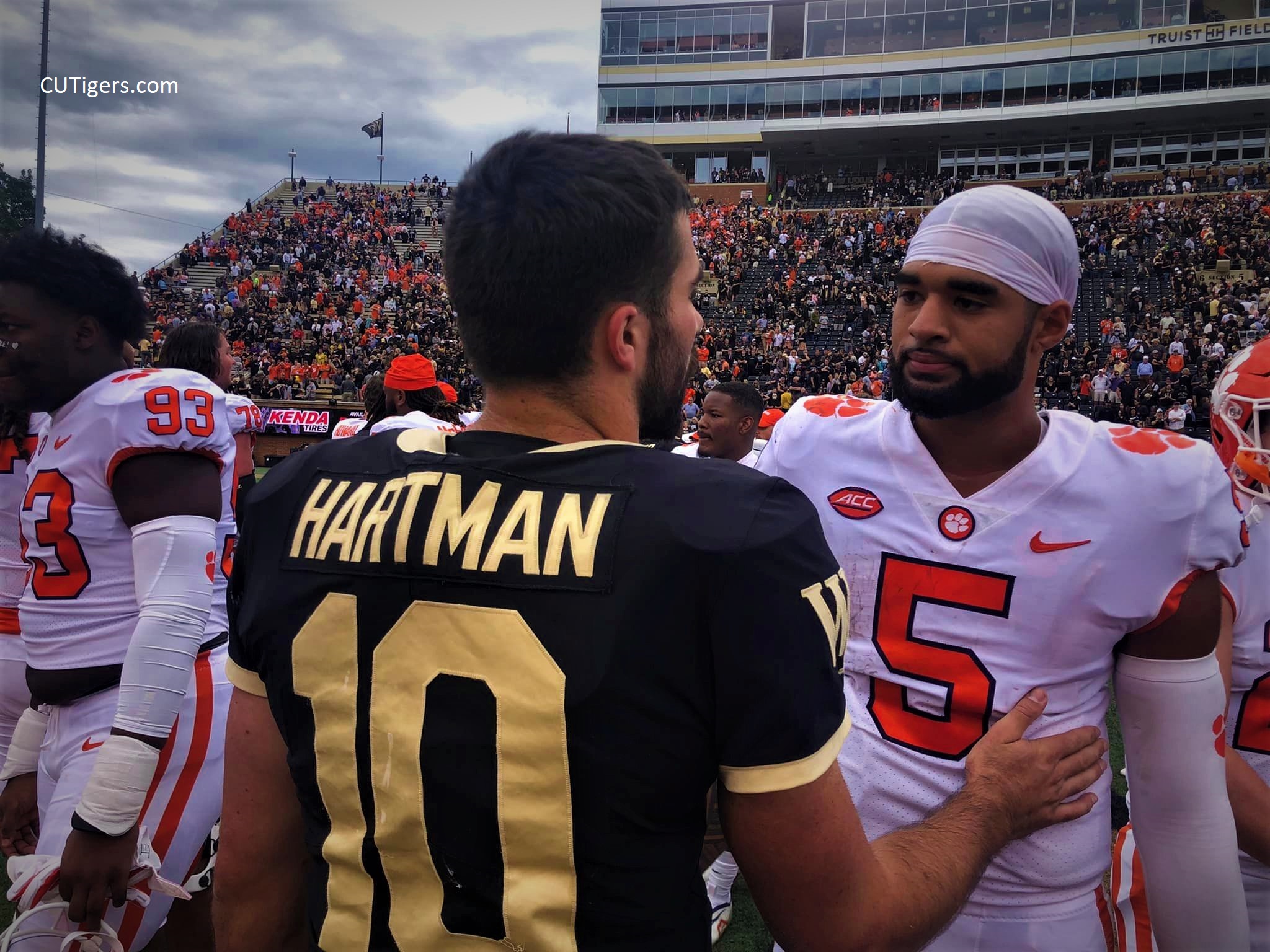 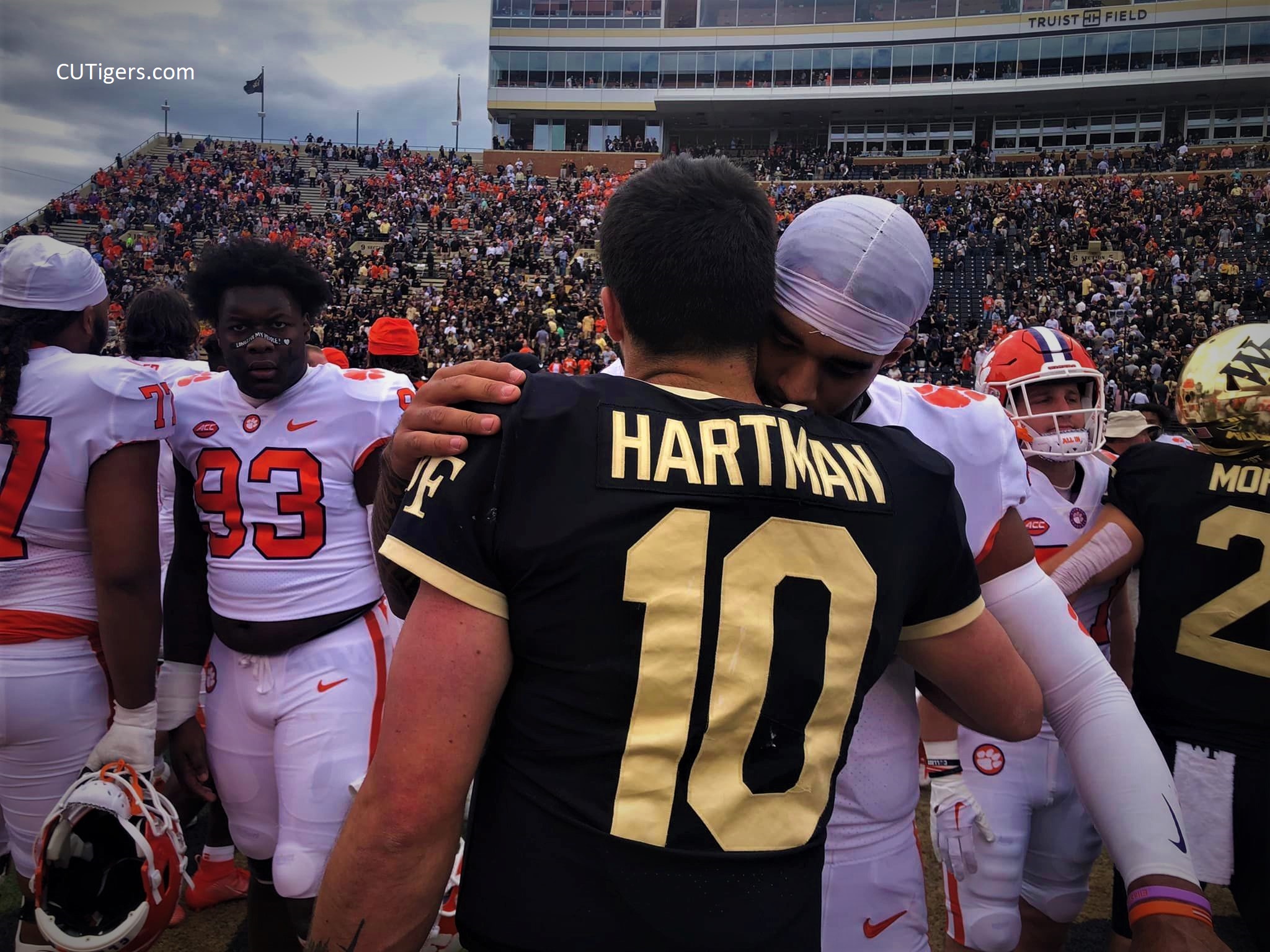 Was the Tigers' defense disappointing? Of course it was. Let me remind you that the Tigers were missing three starters from the secondary in Mukuba, Malcolm Greene and Sheridan Jones. Also, Xavier Thomas and Tre Williams were held out, and they would have made a big difference in pressuring Hartman. Had those players played, Wake would have probably scored 20-28 points like I predicted in my preview. Hartman picked on the Tigers' freshman corners, Pride and Lukus, over and over again. When they didn't complete a long pass on one of the freshmen, it was a pass interference call for 15 yards and a first down. It wasn't just the freshmen, however. Starters Nate Wiggins and Fred Davis also had a miserable game, giving up several big pass plays and pass interference penalties. It's pretty easy to score when you can throw it up for a catch or a PI every time on 3rd and long. Wake has very good, very big, very physical wide receivers, but it was still getting ridiculous. Dabo even said after the game that he was about to go out there and play corner himself. The Tigers gave up 120 yards in penalties (most of it pass interference), and that's the most a Dabo team has allowed in a win other than the Orange Bowl win over Urban Meyer and Ohio State. The good news is that Pride and Lukus are very talented freshmen, and Mike Reed and the staff will coach them up. They'll coach up the rest of the secondary as well, and this will make the team better. They don't have to be ready to beat Alabama, Georgia and Ohio State now. They just have to be ready 3 months from now, and this game will help them get there! When you can remain undefeated with a narrow road win over a top-20 team and still have plenty of mistakes to learn from, it's a double bonus. Getting Tyler Davis and Bryan Bresee back was a big shot in the arm for the defense. Tyler Davis had 1.5 sacks, another TFL and was big in Wake's last possession in overtime. He and Bresee were both instrumental in holding Wake to just 2.8 yards per rush.
The receivers were outstanding and finally living up to what we're used to seeing from "WRU." I think there was one drop, but Beaux, Antonio, Ngata, Allen and Briningstool made big catch after big catch. EJ Williams had a big 3rd down conversion catch as well on a perfectly thrown back-shoulder pass by DJ. The diving and contested catches were few and far between last season, and all of the receivers dropped many passes that hit them right in the hands to kill drives and prevent scores. It was a big reason for low scoring and DJ's horrible numbers for the first 7 games. Now that they are catching the balls they're supposed to and making the tough ones as well, we see 51 points on the scoreboard and 43.8 points per game through the first third of the season. That's No.13 nationally! In fact, only one Clemson team has scored more points through the first 4 games, and it wasn't a Trevor Lawrence, Deshaun Watson or even Tajh Boyd team. It was in 2000 with Woody Dantzler and Rich Rodriguez.
And how about that run by Shipley to tie the game in the 4th? That run pretty much encapsulated the type of running back he is: relentless. It took a second and third effort for him to muscle and stretch his way across the goal line, but he did it! Nobody has a stronger will to win than that guy, pardon the pun. I caught Will signing autographs after the Alma Mater (see the video above). He's scored 7 TD's in the first 4 games. 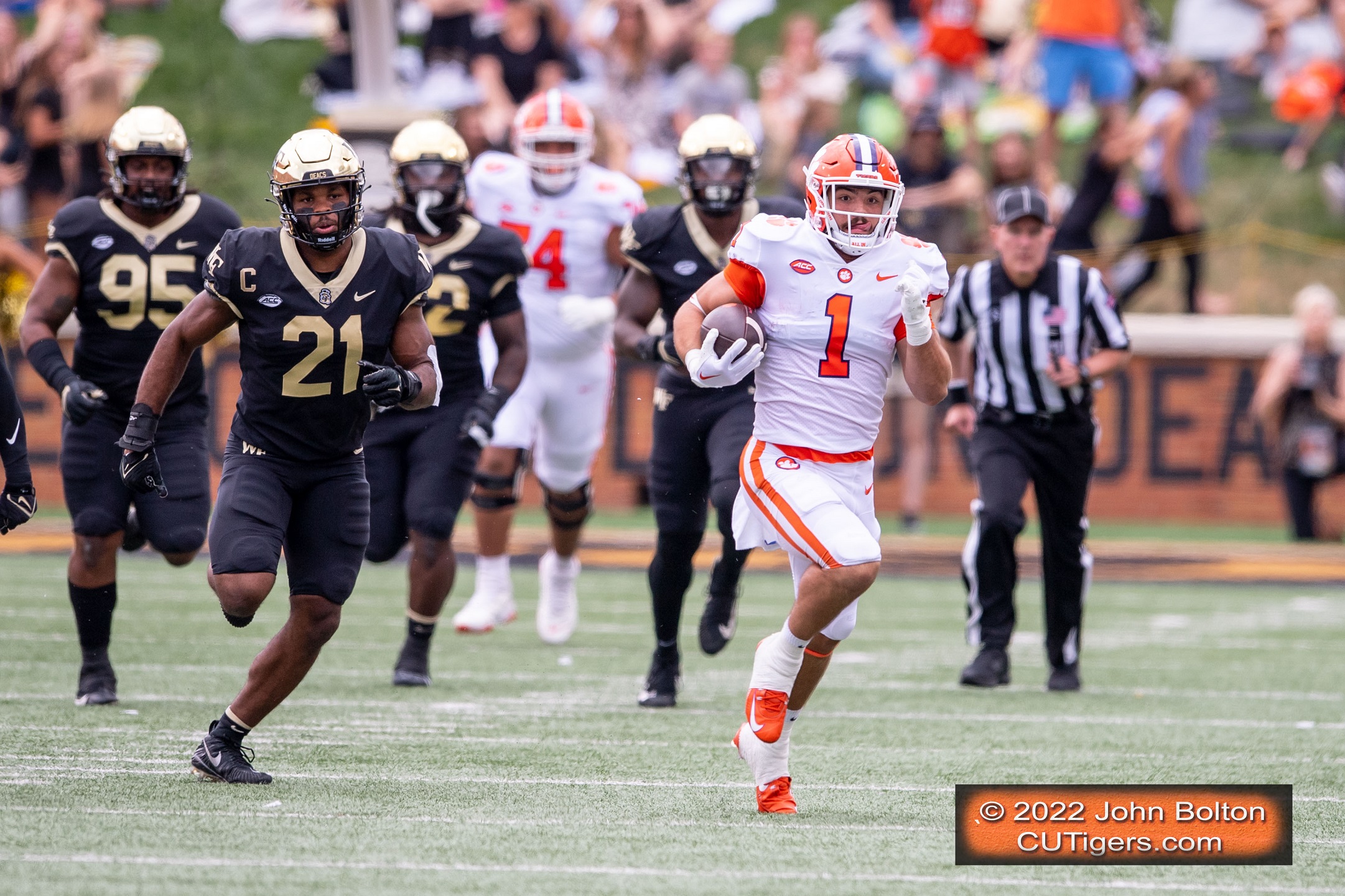 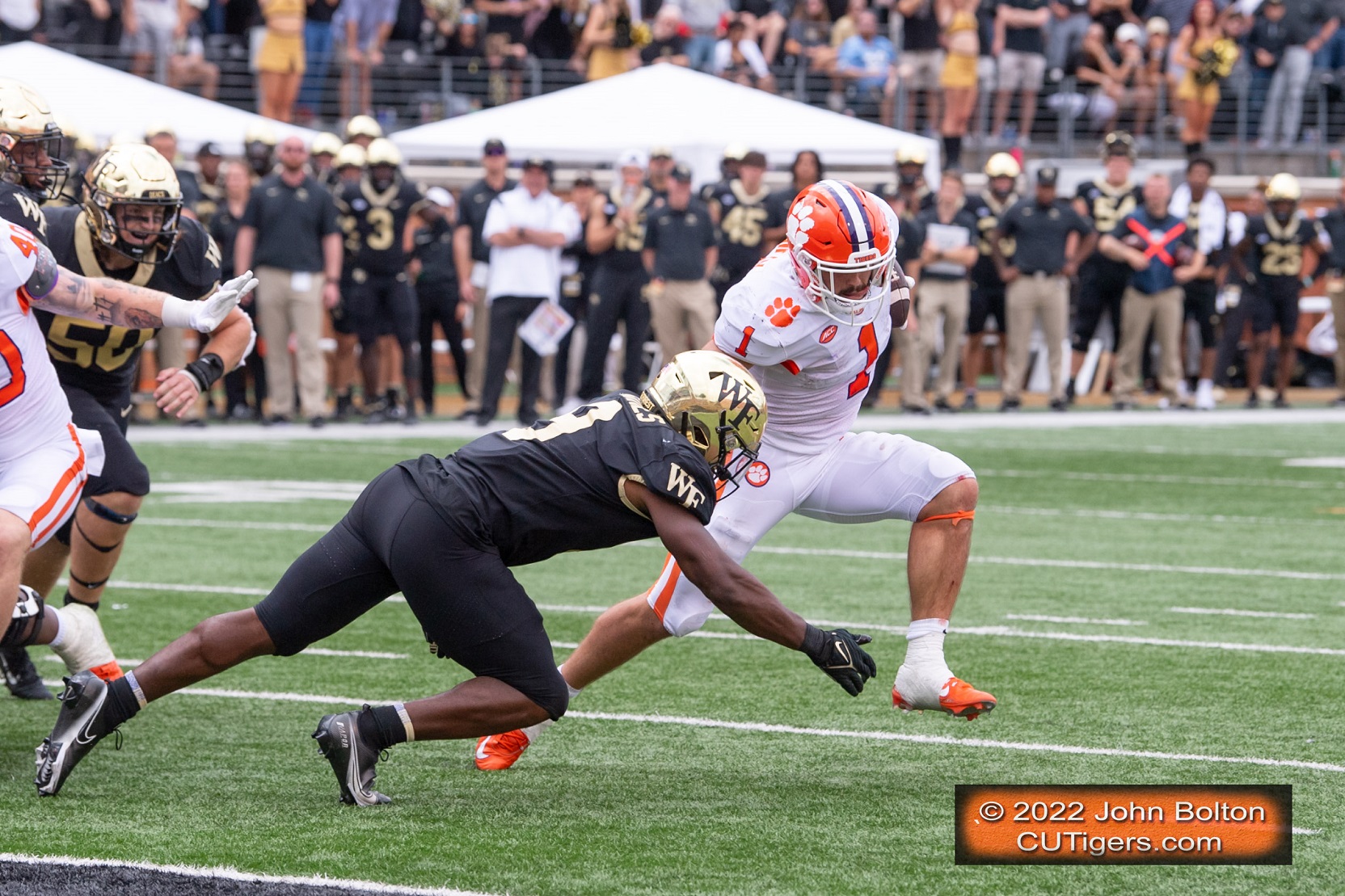 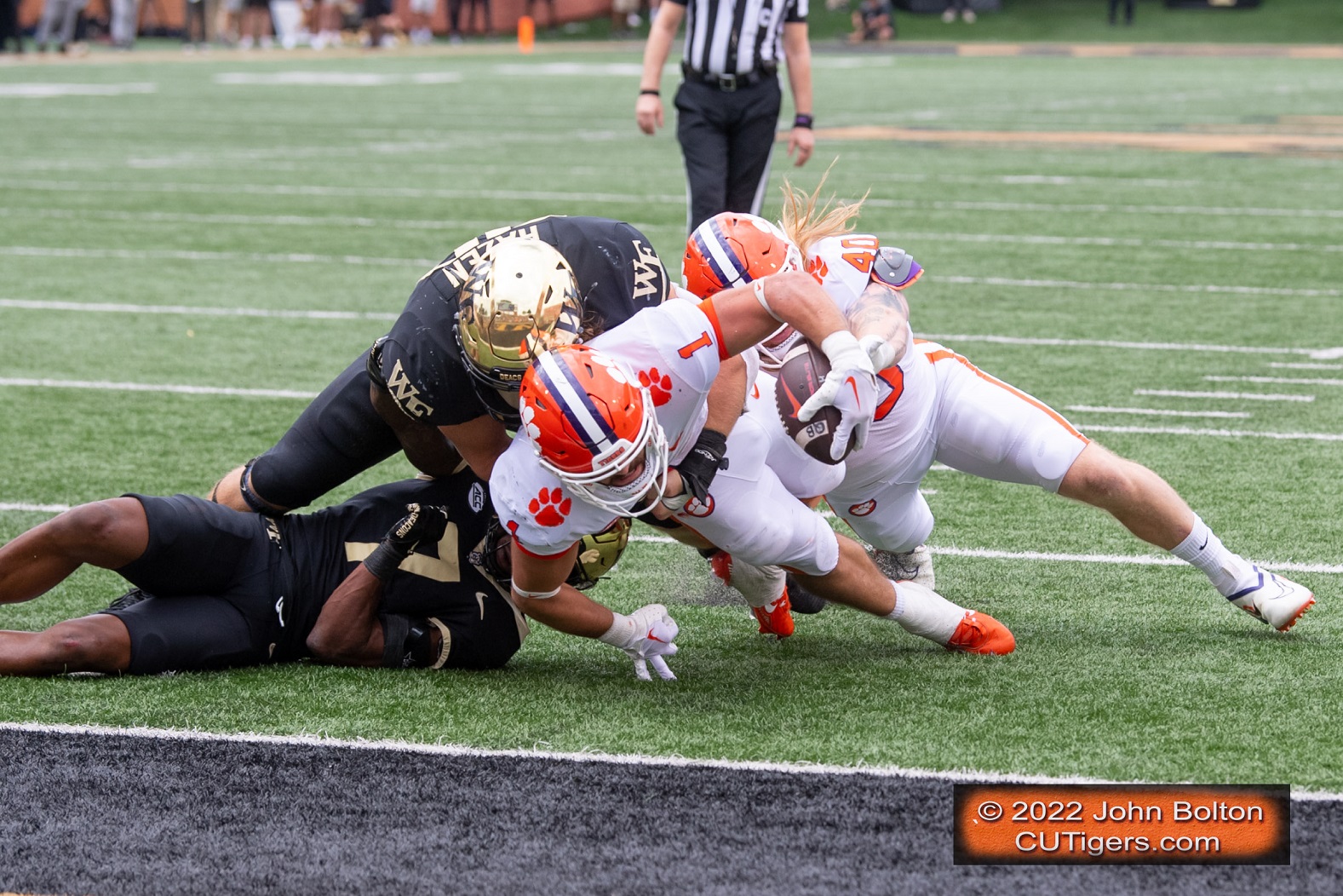 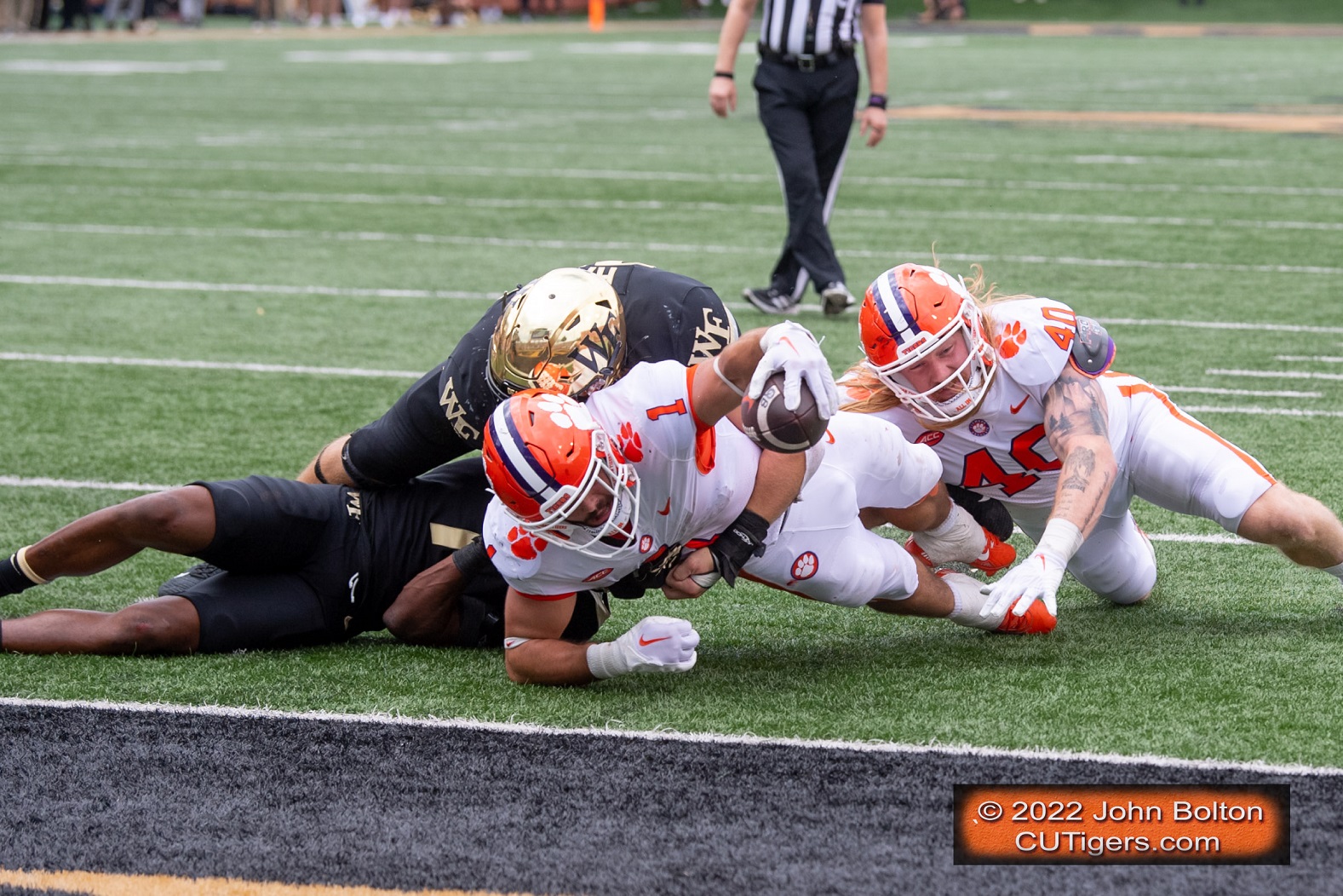 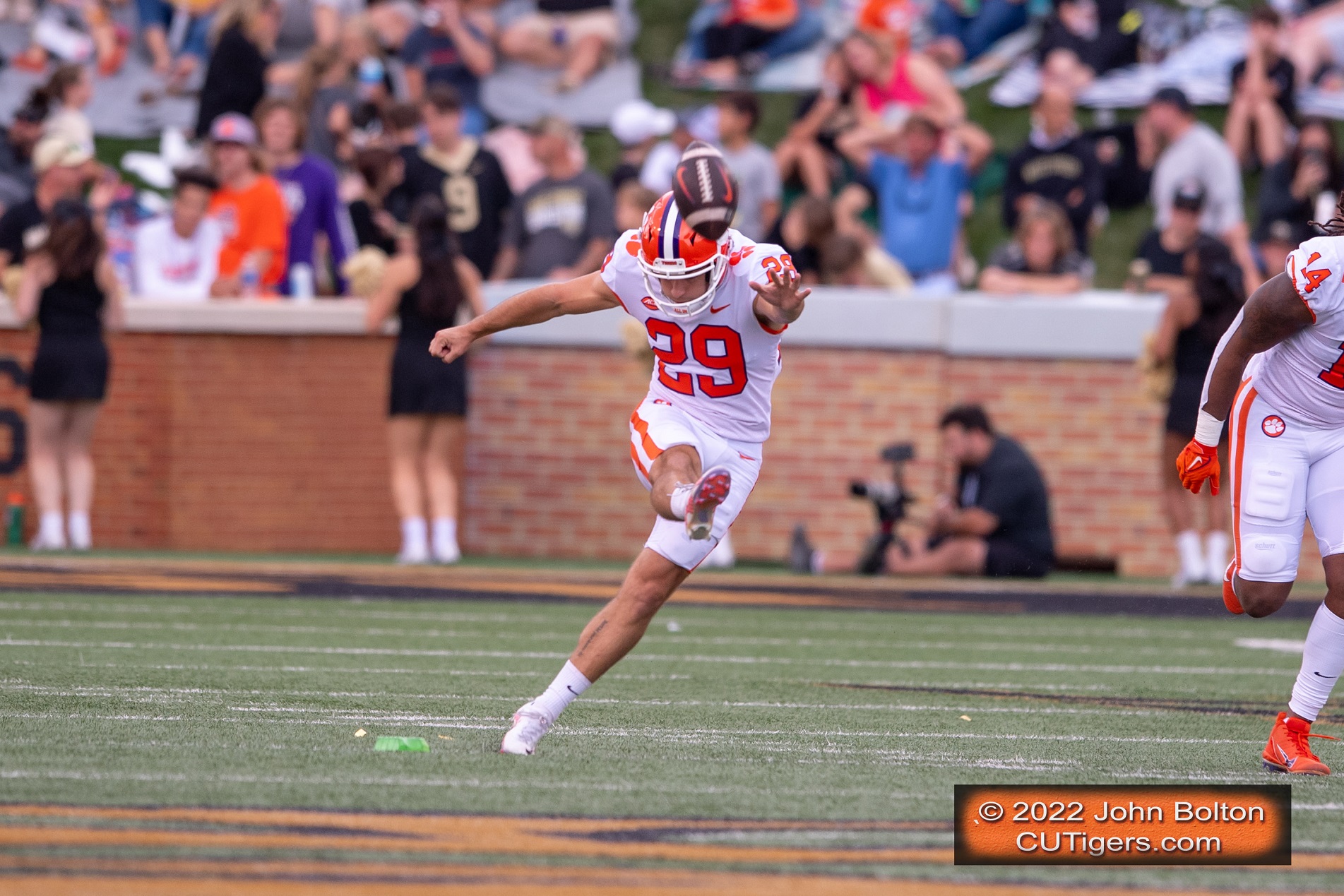 I would be remiss if I didn't throw some praise to BT Potter. What a weapon! We often get upset when the offense has to "settle" for field goals, but look around college football, folks. There is an epidemic of college kickers missing easy kicks and costing their teams games all over the place. It cost Texas a win over No.1 Alabama a couple weeks ago. It cost No.10 Arkansas and Mizzou at Auburn yesterday. Meanwhile, Potter just goes about his business, making kick after kick. And when the pressure is on, and the Tigers need him to make a clutch 52-yarder to tie the game with 4 minutes left? No problem. I'm sure there were many second-guessing Dabo's decision to attempt a 52-yard field goal with the game on the line instead of going for it on 4th and 4, but Dabo knew he could trust Potter. He was 3-3 against Wake when they needed every single point, and he's now a perfect 7-7 for the season.
Speaking of Arkansas blowing its game against the Aggies, the Hogs did Clemson a big favor because the Tigers will get to host ESPN College GameDay next week for the first time since the Miami game in 2020! They would have been at Arkansas for its game against Alabama next week if the Hogs hadn't lost. The Tigers host NC State for a rare ACC top-10 matchup and critical Atlantic Division showdown. Last year's meeting was a double-overtime thriller that ended the Tigers' long win streak over State and cost the Tigers their 7th straight division title. The Tigers are 6-1 all-time when hosting GameDay, by the way, losing to eventual national champion FSU in 2013. 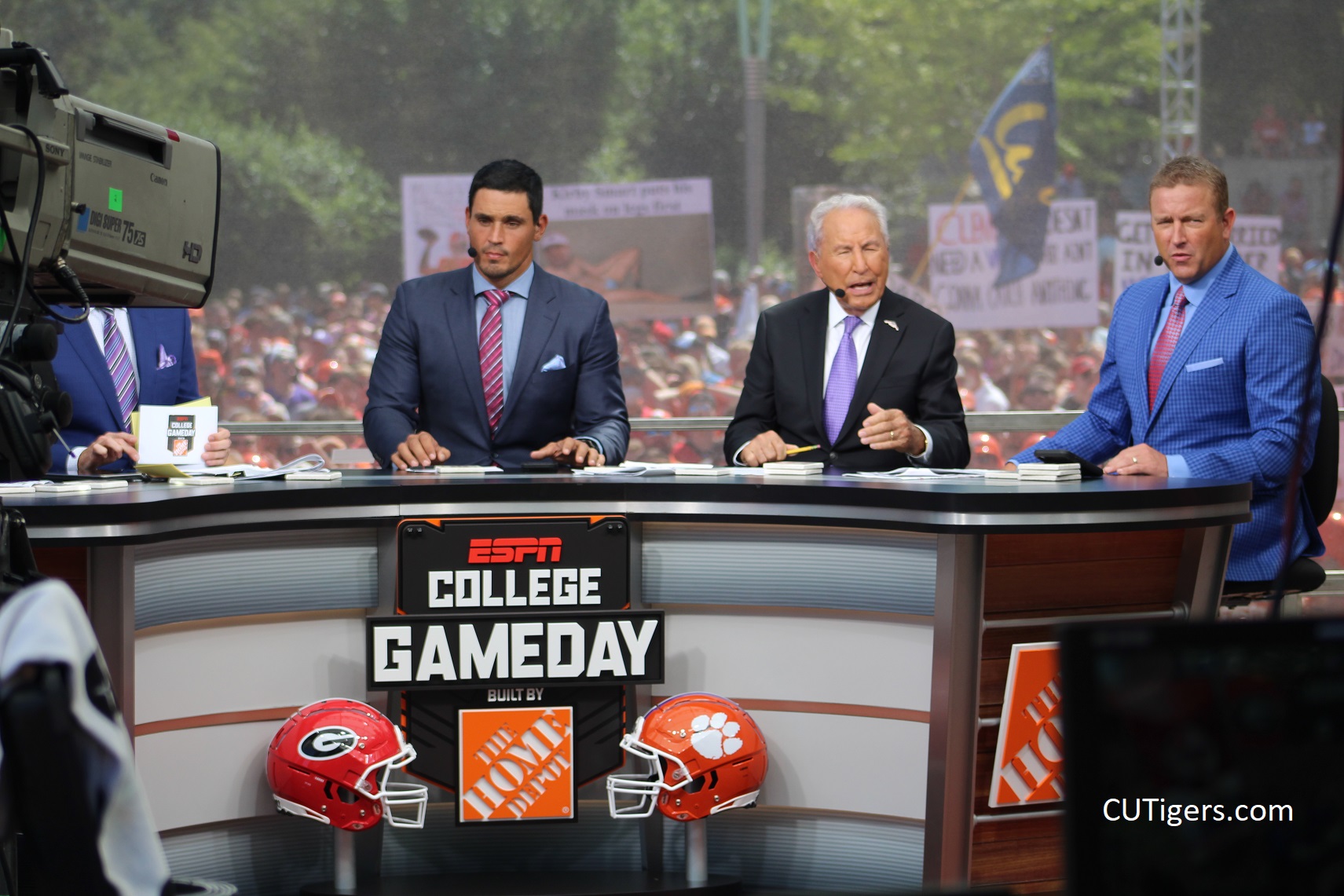 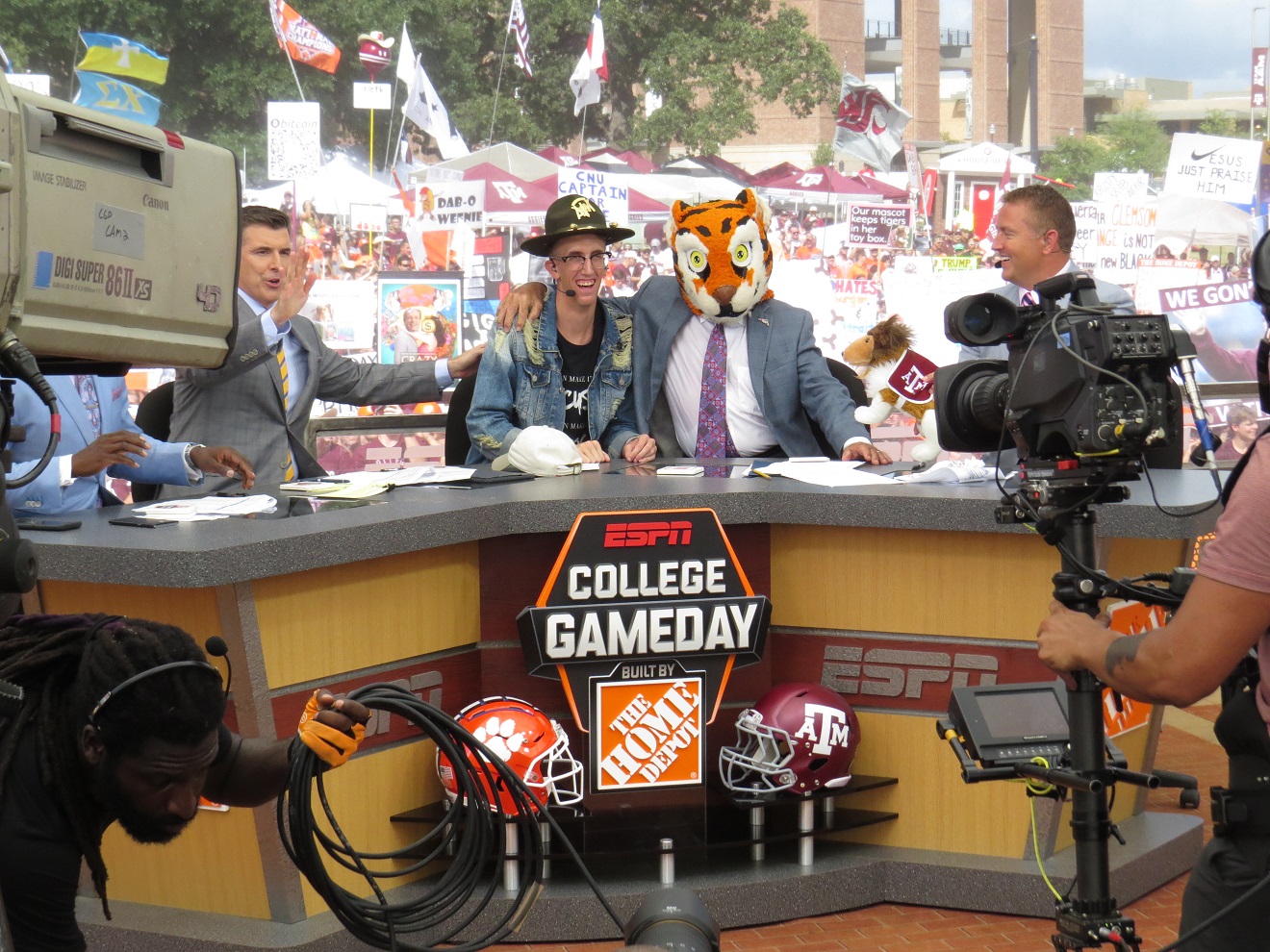 The Tigers have extended the nation's longest win streak to 10, and Dabo is now 14-0 against the program that ended Tommy Bowden's career and made Dabo Head Coach. Also, another tombstone will be planted in Clemson for beating a ranked team on the road! The Tigers have won 63 straight games when leading at the half, and they are an astonishing 33-7 in one-score games since 2011. That's why I sit up in the press box during these 4th quarter nail-biters and have little doubt that Clemson will find a way to win.
I'll have more in-depth analysis after I watch the broadcast. In the meantime, our post-game interviews, highlights, notes and more photos are below! Shout-out to my fantastic photographers, John and Katy Bolton, for the incredible shots they got from the sidelines, including the game-winning play.