TALLAHASSEE, FL – WHEW! The game got a little dicey at the end, but the Tigers hung on. In the interest of full disclosure, I probably jinxed the Tigers late in the 4th quarter when I was bragging about my 34-20 score prediction being one point off. Right after that, the Noles drove 94 yards for a touchdown with 2 minutes left! As Dabo says, though, the fun’s in the winning, and a win is a win. Let the pollsters punish the Tigers all they want because their votes don’t matter in November and December. As long as the Tigers win every game by at least a point, they’ll be in the playoff. That being said, I know Dabo wasn’t happy about the way they finished, and the team will get better from it. In retrospect, how huge was that goal line stand by the Tigers in the 4th quarter when they were up 20 points?! Of course, I’m sure they would have played the last couple of FSU possessions with much more urgency if they had allowed the Noles to score on that possession. But to me, that goal line stand says all you need to know about the heart and character of this team. How many teams would have rolled over and allowed the easy score when they are up 20 points in the 4th quarter, and it’s first and goal at the 4-yard line? The answer is most of them. The bright side of the final score is that it counts as another one-score win, so the Tigers are now 34-7 in one-score games since 2011!

I wrote in my preview that the Tigers would get the Noles’ best shot and that they would play a much cleaner game than they did last week at NC State. Sure enough, the game couldn’t have started any better for the Noles. They ran the ball right down the Tigers’ throat with a nicely scripted opening drive, striking first to make it 7-0. That sent the crowd into a frenzy, and to make matters worse, the Tigers went 3 and out, thanks in part to a personal foul on freshman OT Blake Miller, losing his cool after a play. Fortunately, the Tigers’ defense rose up with a 3 and out on the following possession, and the offense was able to tie the game. On 3rd and one, Shipley ran for a first down, and then DJ avoided a sack and made a perfect pass to Antonio Williams, who was streaking down the sideline, for a touchdown. The true freshman has really emerged as one of DJ’s go-to weapons. 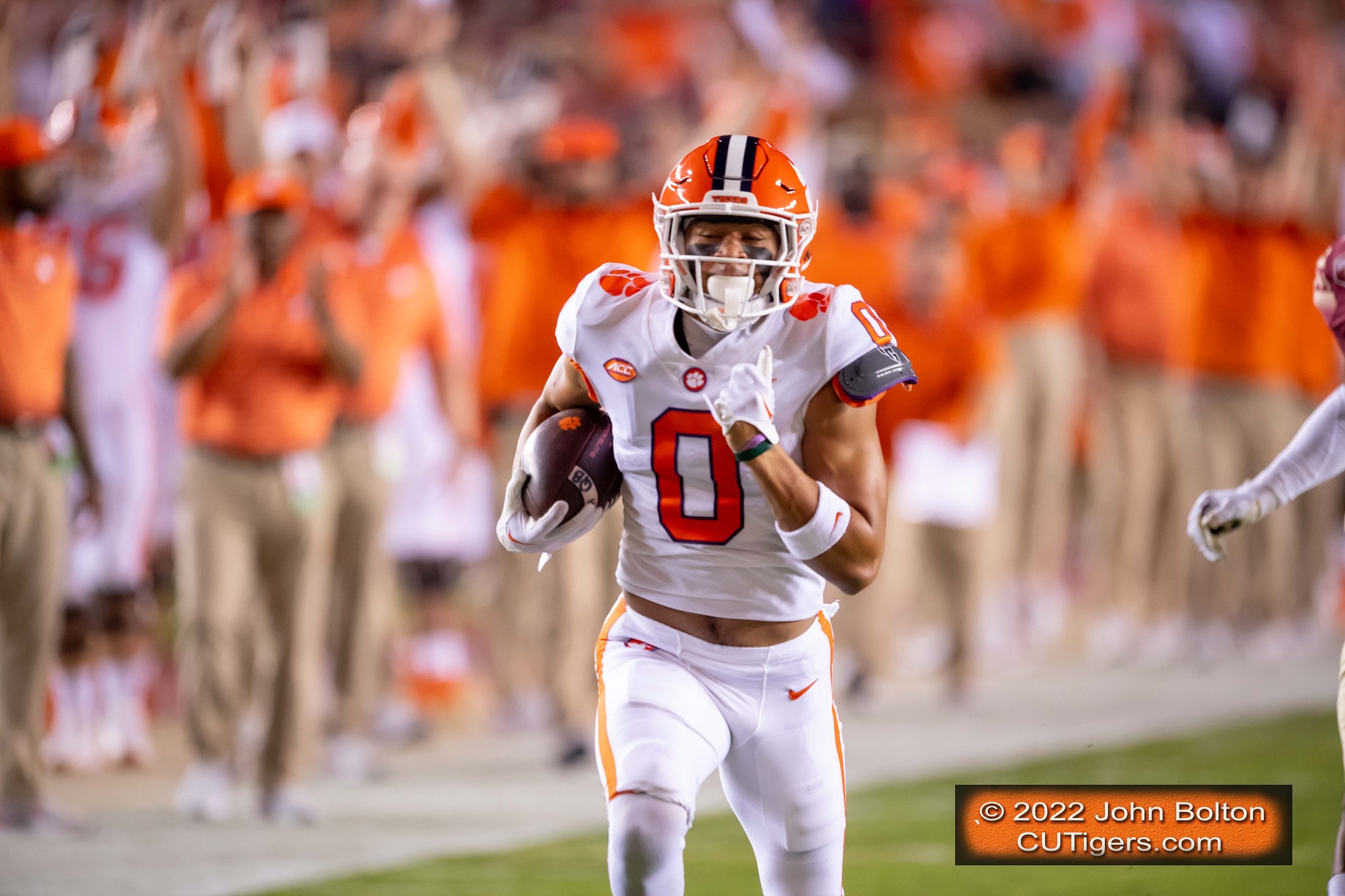 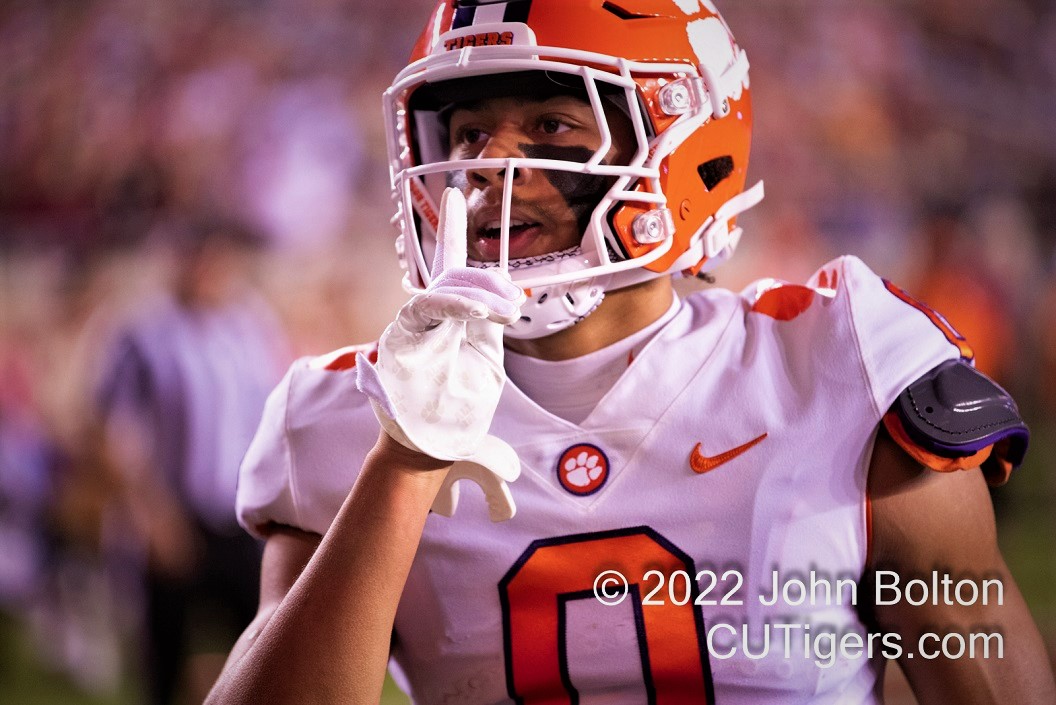 The Noles answered with another touchdown to retake the lead 14-7, just barely converting on a 4th and goal play from the one-yard line to open the 2nd quarter. On 3rd and 7, DJ made another great throw on an outside-shoulder pass to Ngata on the sideline for 19 yards DJ took a bad sack on the next play, but Mafah ran for 14 yards to make 3rd and 2. It took DJ a couple of efforts, but he was able to rush for first down on 4th and one. He followed that with a completion to Shipley for 11 yards and a big 3rd and 4 pass to Antonio Williams for 17 more. That set the Tigers up with first and goal at the FSU 8-yard line, and DJ found Jake Briningstool at the pylon to tie the game. It was the 4th TD of the season for the sophomore tight end and his 3rd in the last 4 games! It was an impressive answer after the Noles and their crowd gained momentum and confidence from retaking the lead. The Tigers went on to score 27 unanswered points, once again dominating the “middle 8,” or the last 4 minutes of the first half and first 4 minutes of the second. It’s the 3rd straight game in which they’ve done that, and it not only deflated the Noles but took the crowd completely out of the game. After BT Potter hit a 47-yard field goal to give the Tigers their first lead of the game, Myles Murphy forced a fumble recovered by Tyler Davis, and that gave them the ball at the Noles’ 47-yard line with 42 seconds left in the half. That was all DJ and the offense would need to get into the end zone because Shipley ran for 36 yards to the 6-yard line on the very next play, and DJ took a bootleg in for his 4th rush TD of the season to give the Tigers a 24-10 lead going into the locker room. 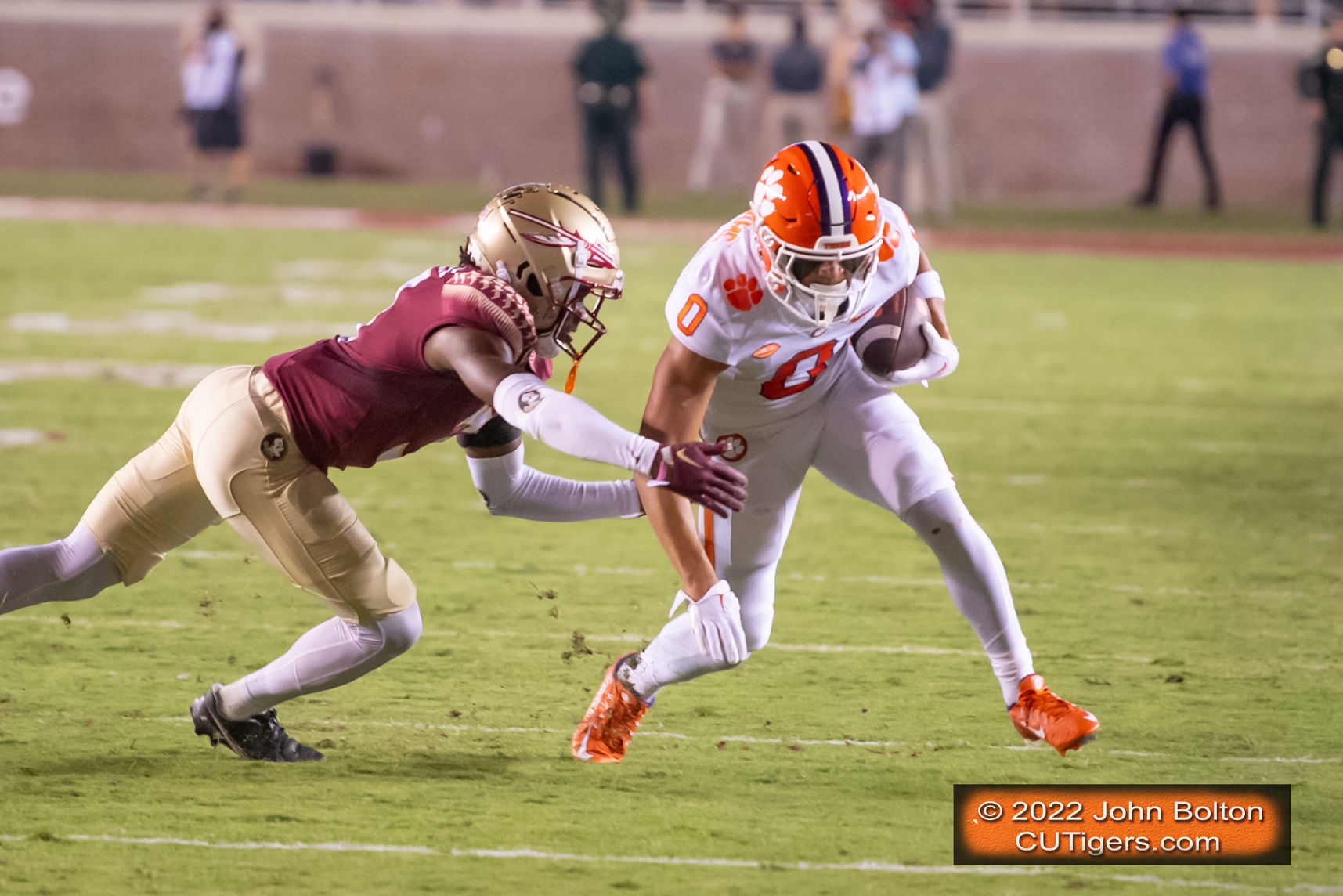 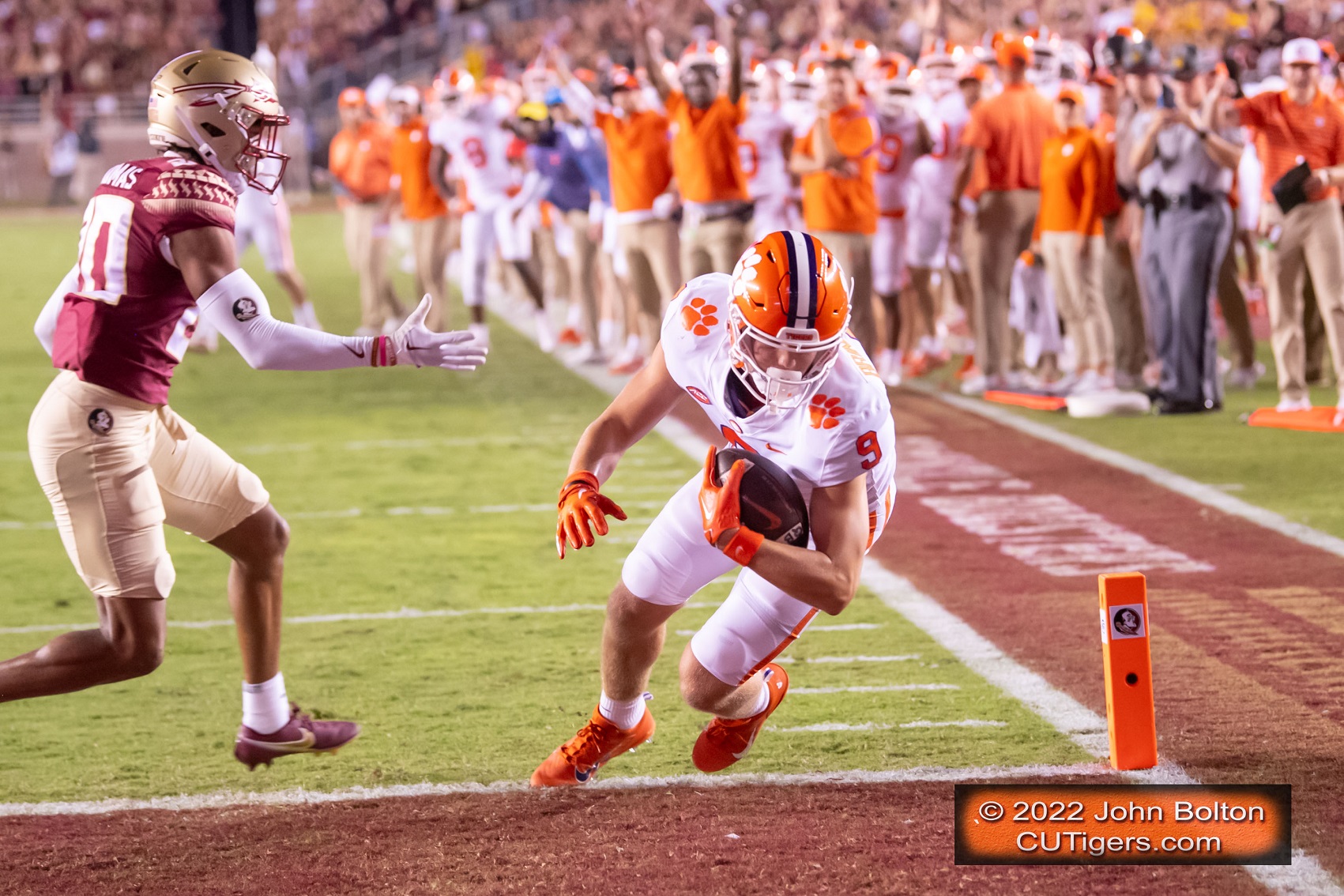 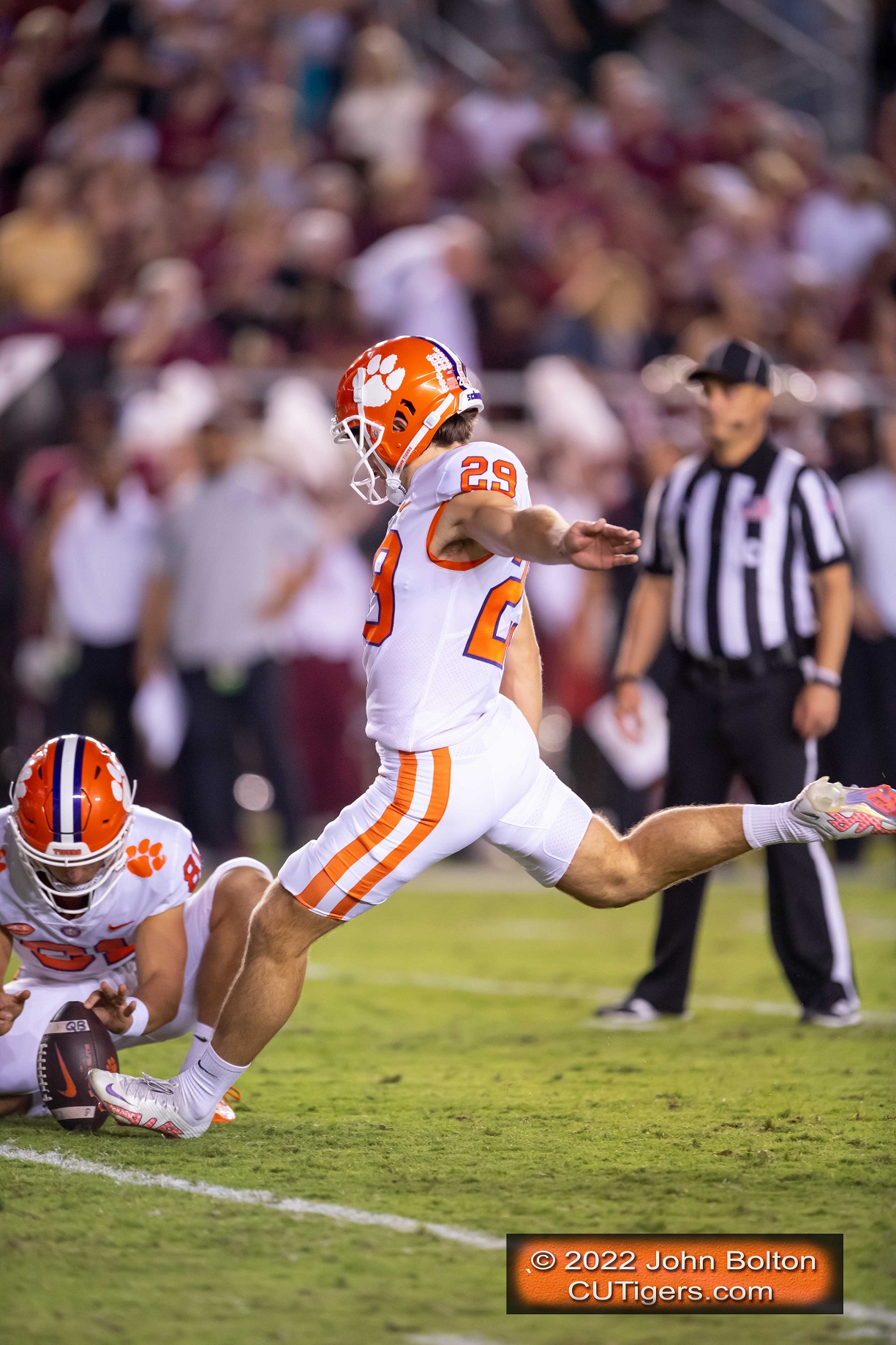 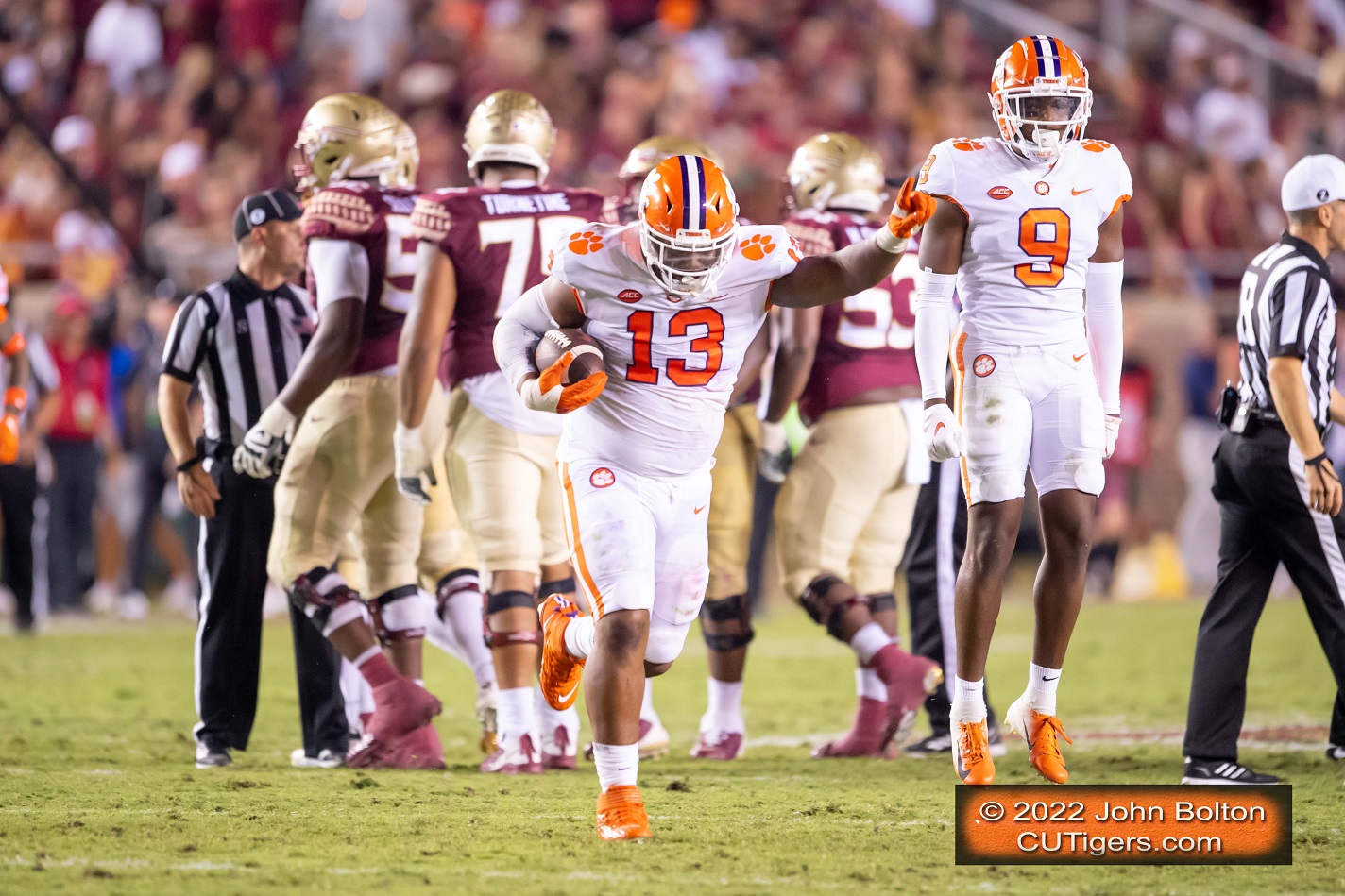 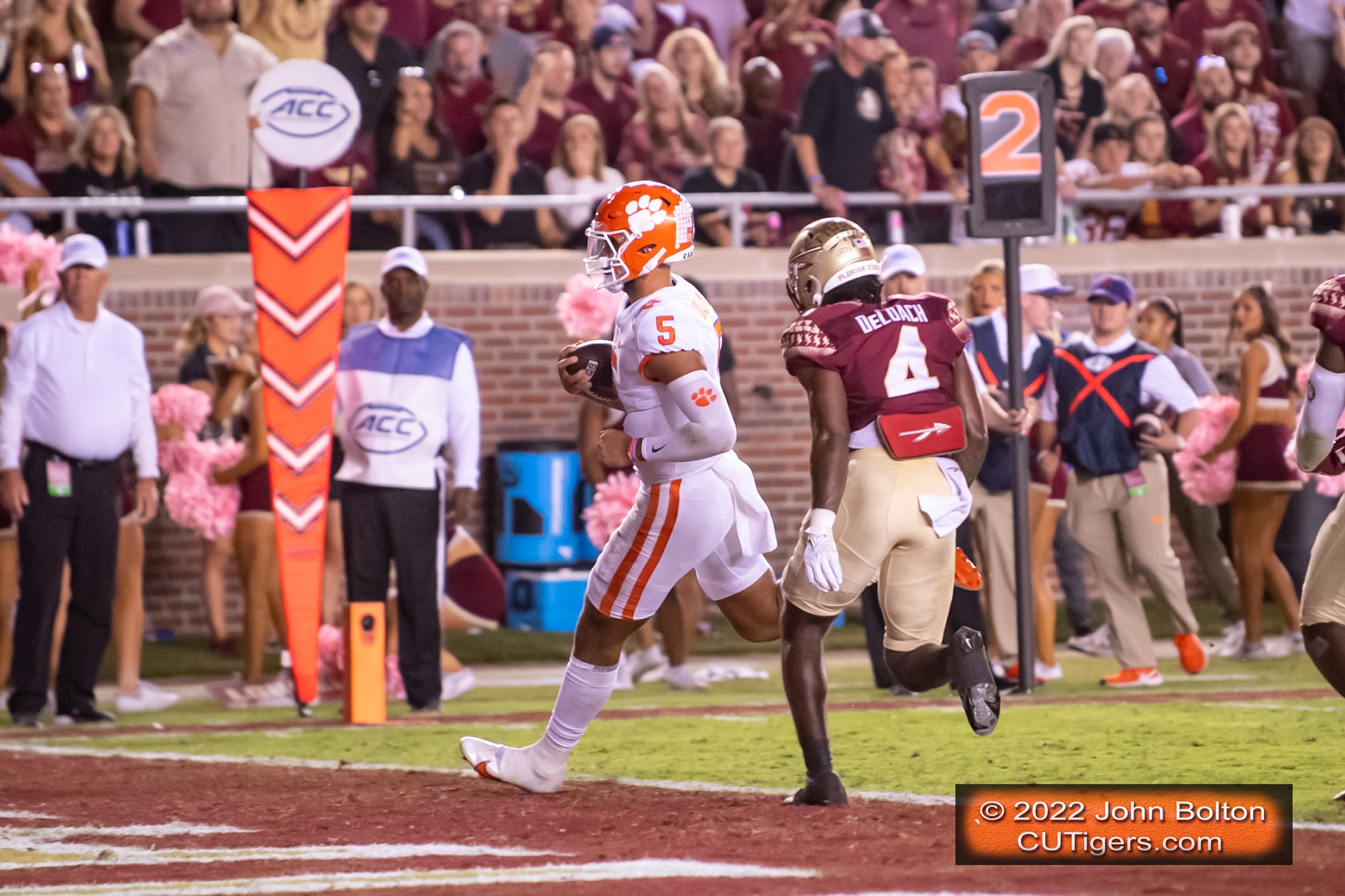 Whatever Dabo has been telling the team at halftime, it’s been working! For the 3rd straight week, they roared out of the locker room. Shipley picked up right where he left off, bursting a 65-yard kickoff return from the goal line to open the half. Dabo decided it was the perfect time to go for the jugular. With the ball on the right hash at the Noles’ 31-yard line, the Tigers ran a reverse flea-flicker and executed it to absolute perfection! DJ’s pass was right on the money to tight end Davis Allen, who snuck out of the backfield and was streaking down the sideline. DJ hit him in stride to put the Tigers up 31-14, and the crowd was completely out of the game at that point. 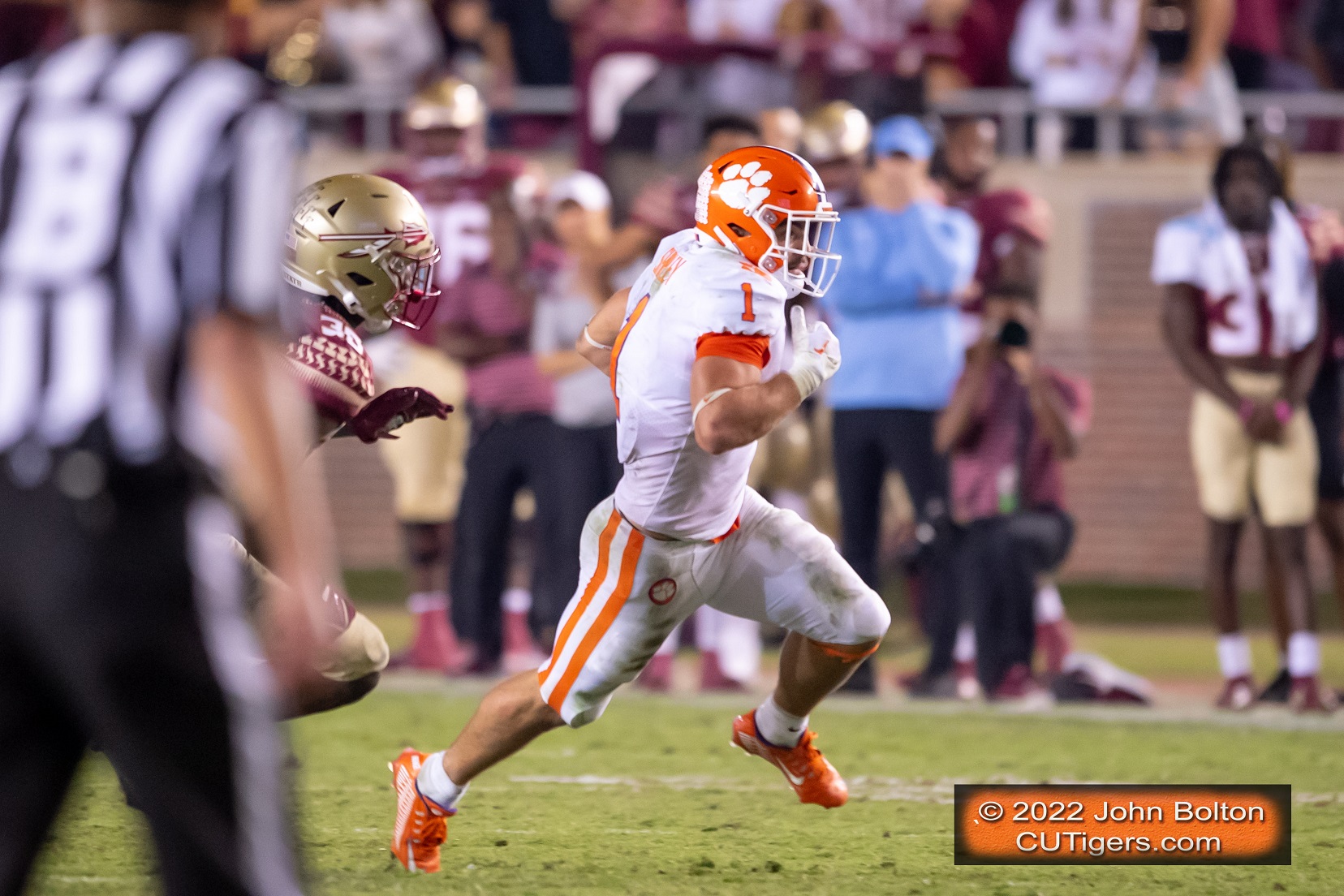 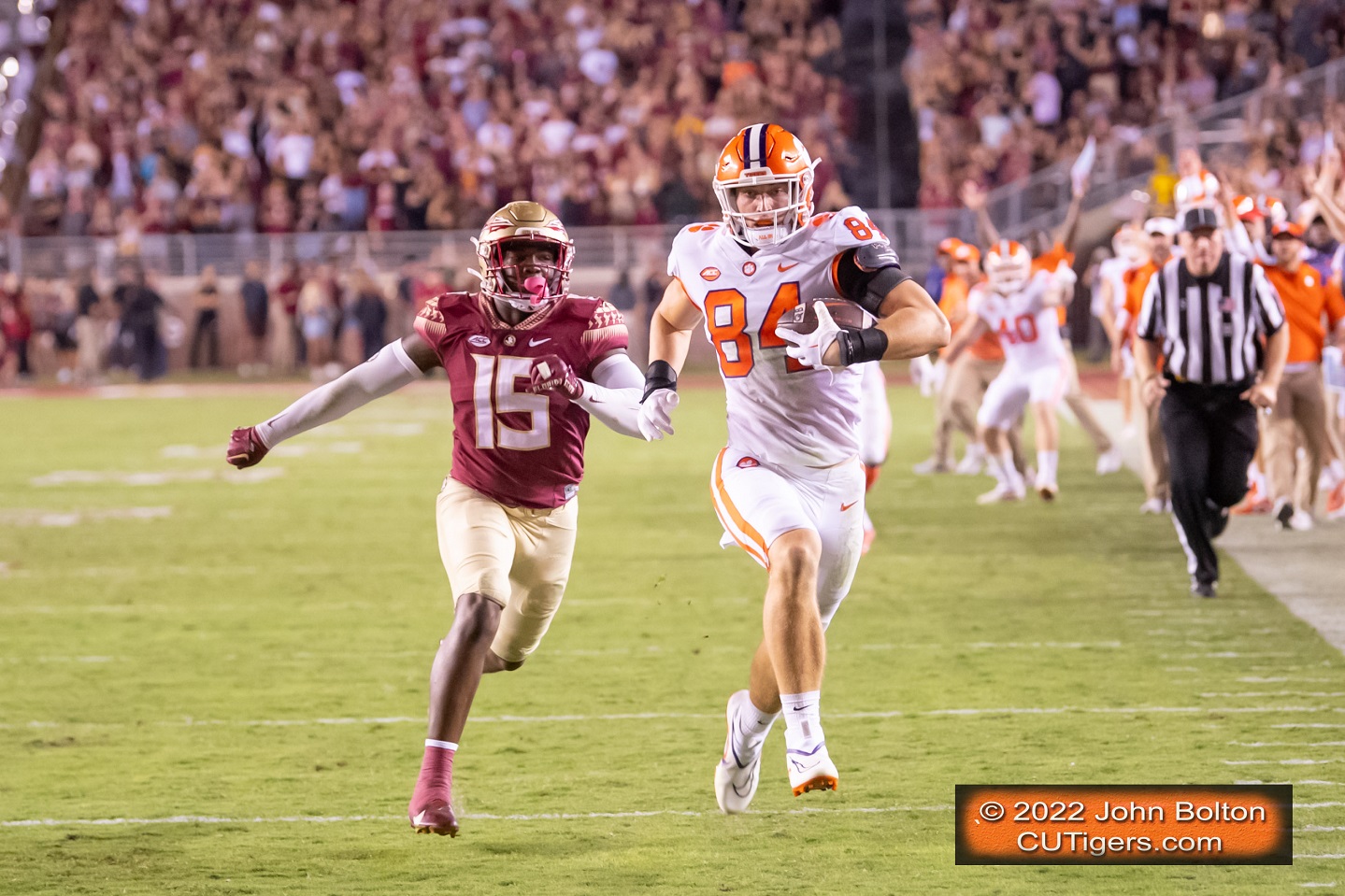 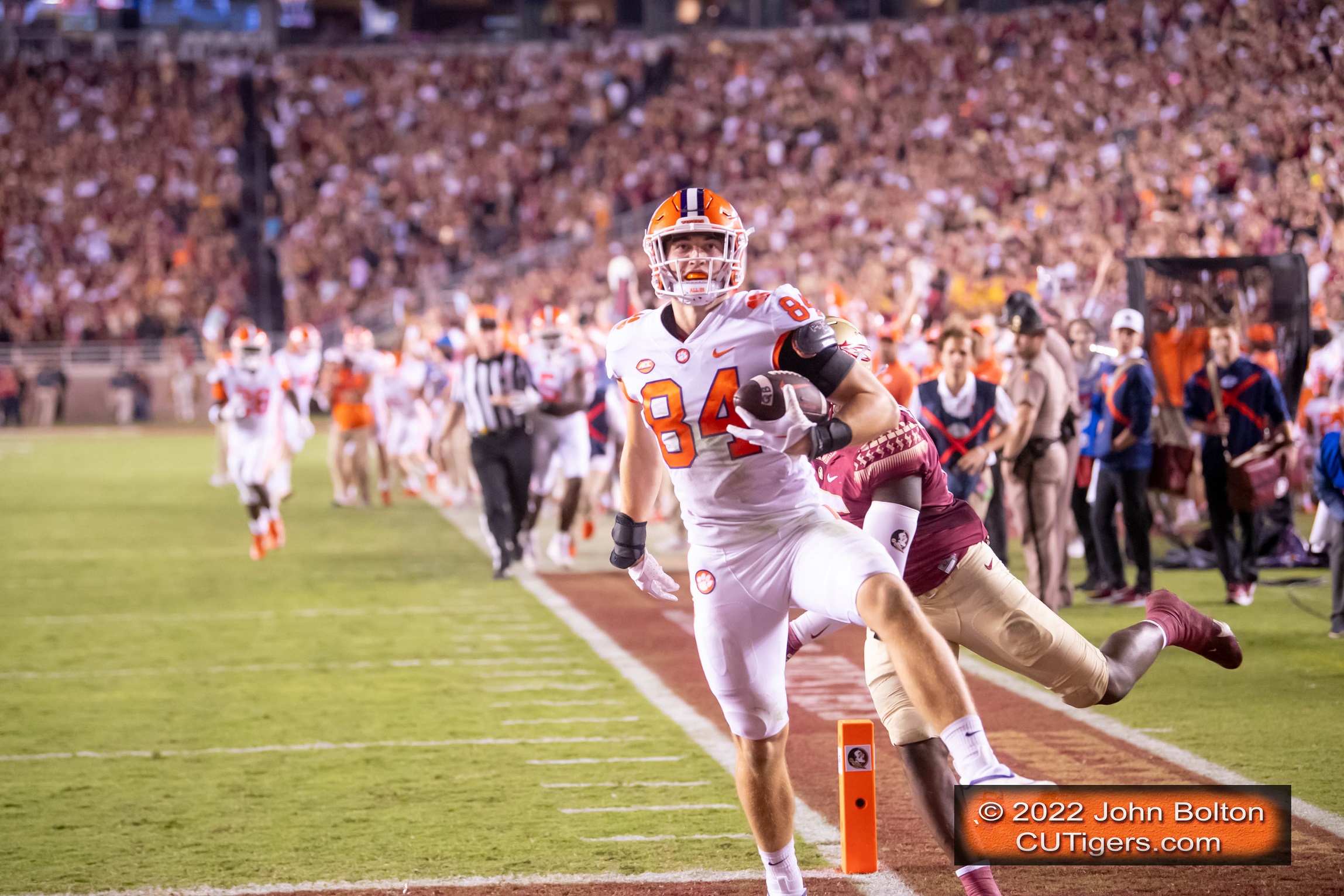 How about the game Myles Murphy had? The No.1 NFL prospect at DE started the season a little slow, but he's really come on over the last few games. He had 6 tackles, 2 sacks, 1.5 tackles-for-loss and a forced fumble against the Noles. Bryan Bresee was back in the lineup but doesn't quite appear to be 100 percent yet after missing the last couple games with a kidney infection, and he had missed 3 of the last 4 games. He missed a couple tackles, including a sack or two, and that's rare for him! 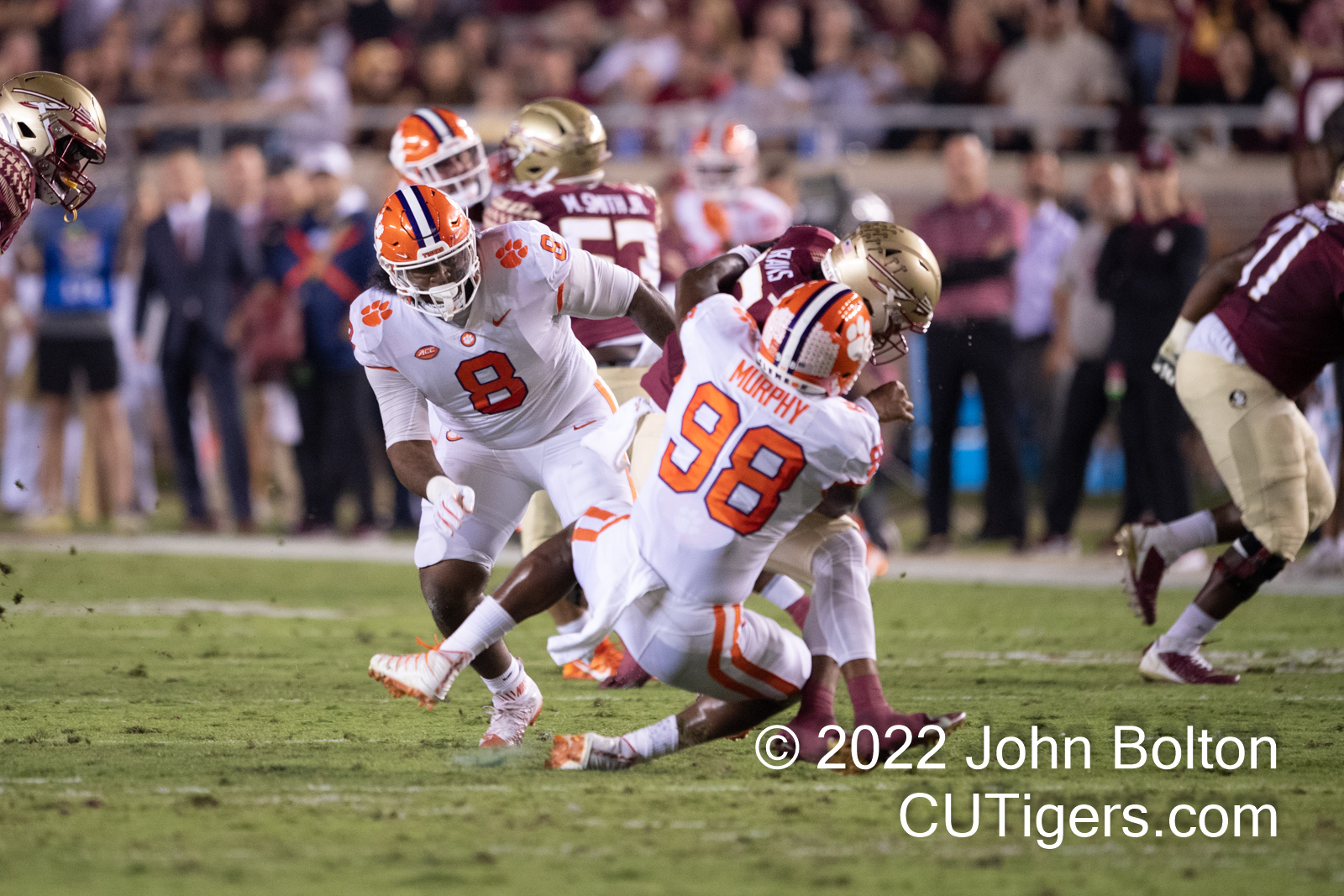 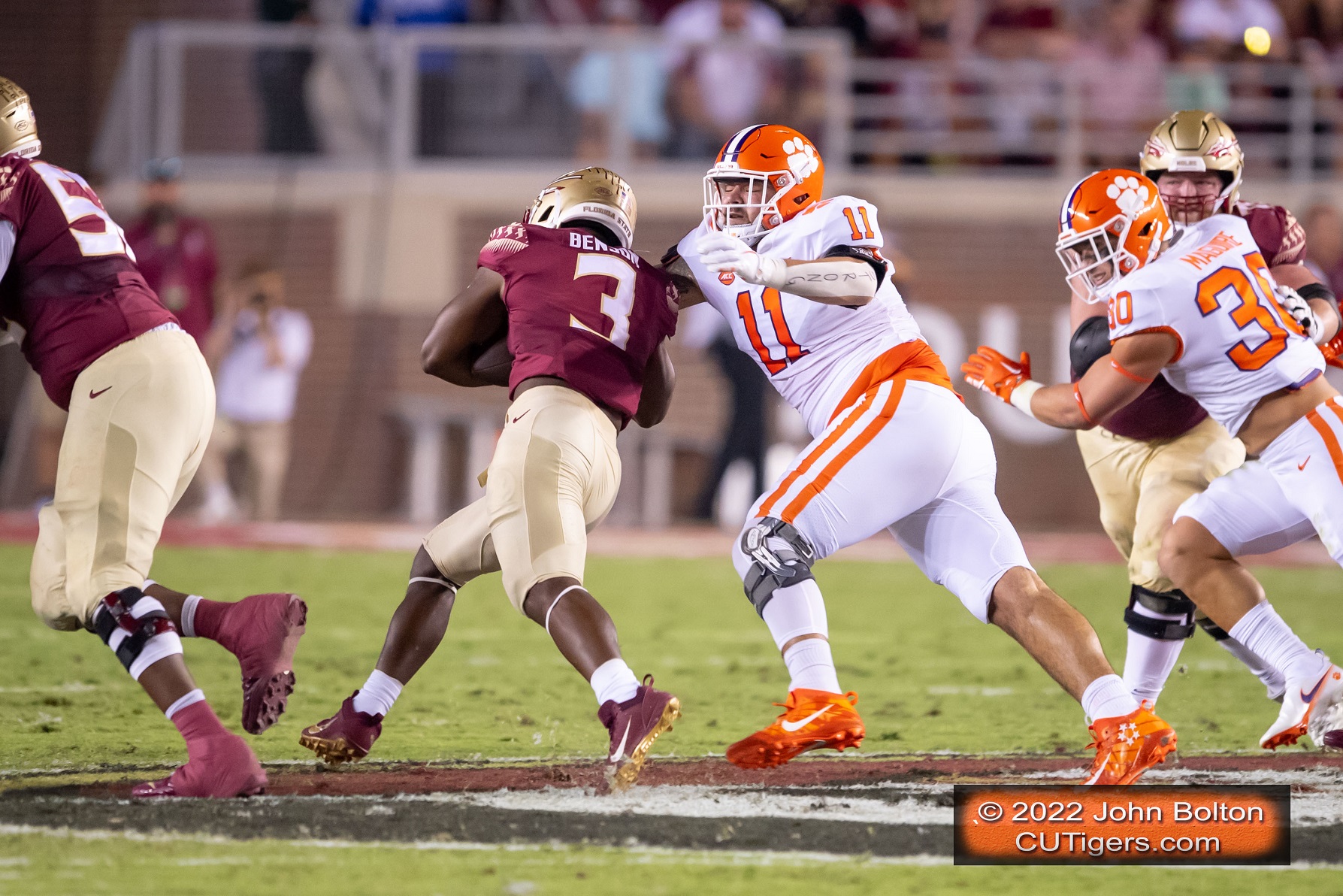 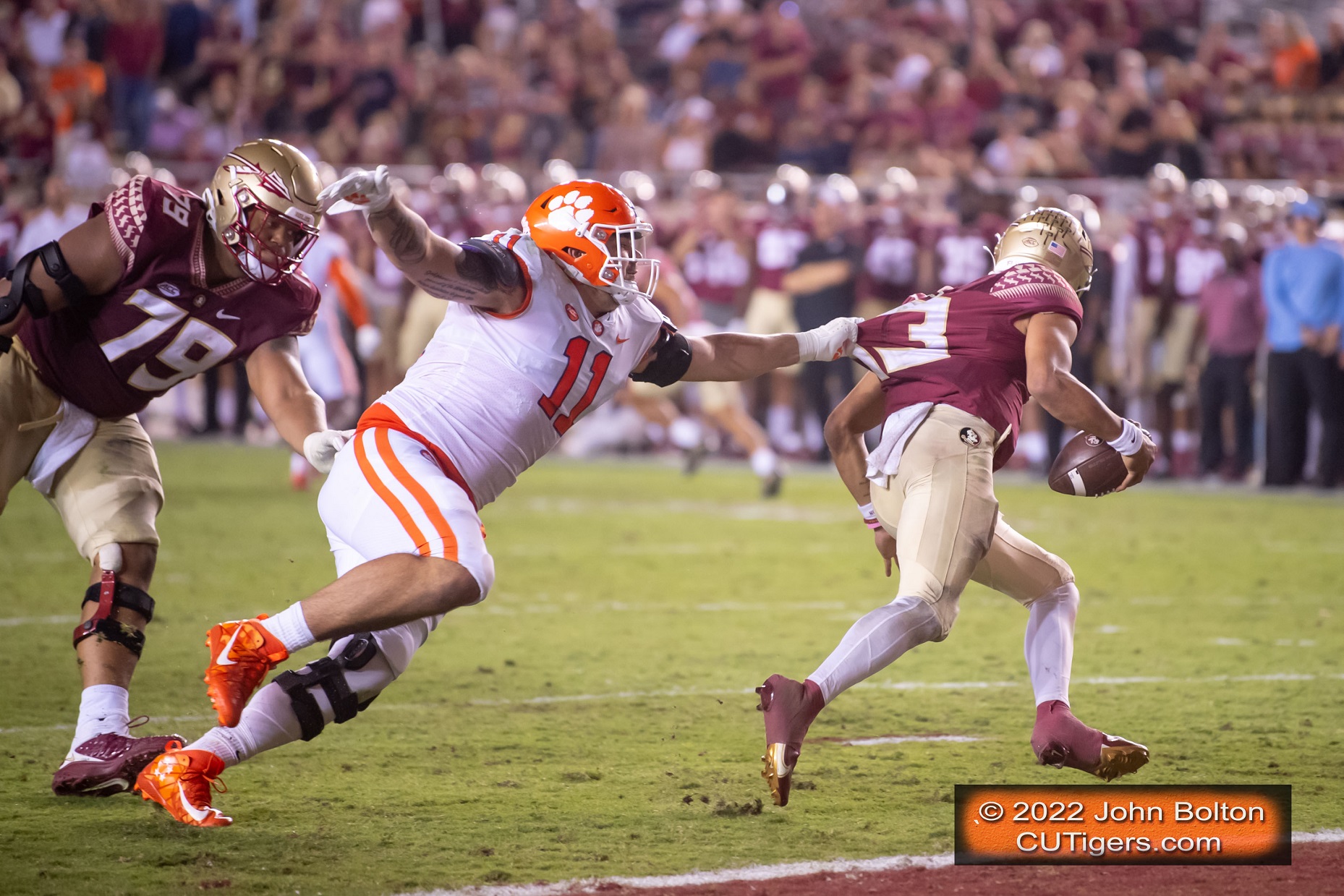 The Tigers’ defense continued to dominate in the 3rd quarter, and Potter tacked on another field goal to give the Tigers the 20-point lead in the 4th quarter, which would be enough to win. Sure, it would have been nice for the Tigers to have kept the pedal to the metal and win by 4 touchdowns, but give credit to Jordan Travis and FSU for not giving up and continuing to fight. They showed a lot of fight and heart on both sides of the ball. Any of the other FSU teams over the last 5 years would have rolled over, and it would have been another Clemson blowout in Tallahassee. We’ll have to wait another week for the Tigers to put together their first complete four-quarter performance of the season. Next week would be a good time for it against a top-15, undefeated Syracuse team! 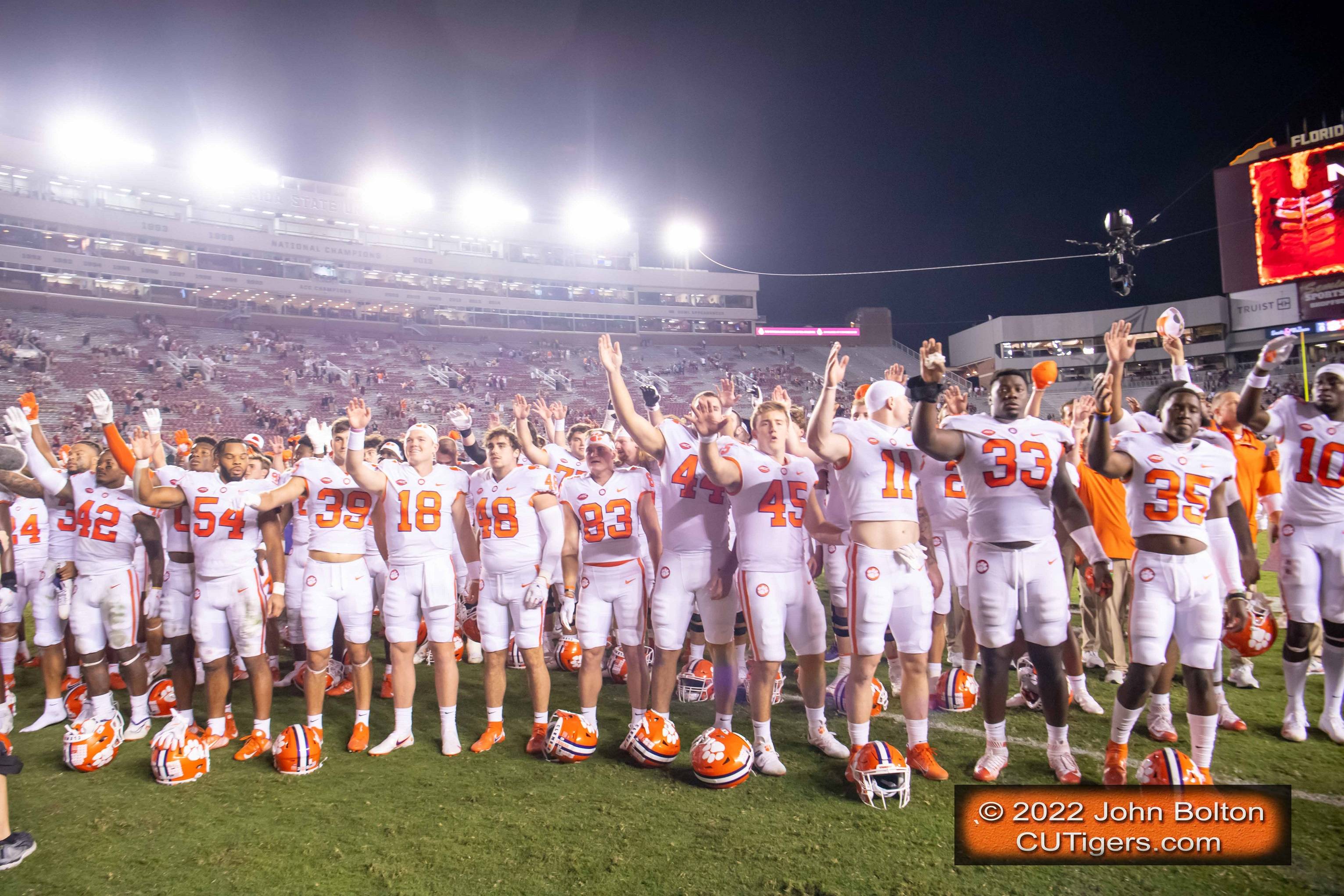 The Tigers seemed to come out of the game in pretty good shape. They had the entire defensive line for the first time all season and almost everyone back in the secondary. CB's Malcolm Greene and Sheridan Jones were back for the first time in weeks, along with safeties Mickens and Venables. Unfortunately, safety Jalyn Phillips took a bad hit in the second half from Trenton Simpson on the sideline. His arm was hanging as he jogged off the field, but he came back, so hopefully he's ok. They don't need to lose him now that they've finally gotten all the safties and corners back! I noticed Xavier Thomas limping with his shoe off right after the game, but his foot is probably just sore. He said that it was sore last week after playing just 6 snaps at BC, and he played a lot more tonight. I’m sure he’ll be dealing with post-game soreness for a while.

It was another great game for DJ, He was 15-23 for 229 total yards with 3 TD's through the air and one on the ground with no interceptions. And how about the game by Shipley! He didn't score, which is rare, but he had 238 all-purpose yards, including the first down run at the end, allowing the Tigers to run out the clock. He had too many first down conversions to count! Mafah also had another good game with Pace out. He's had several big plays over the last few games. 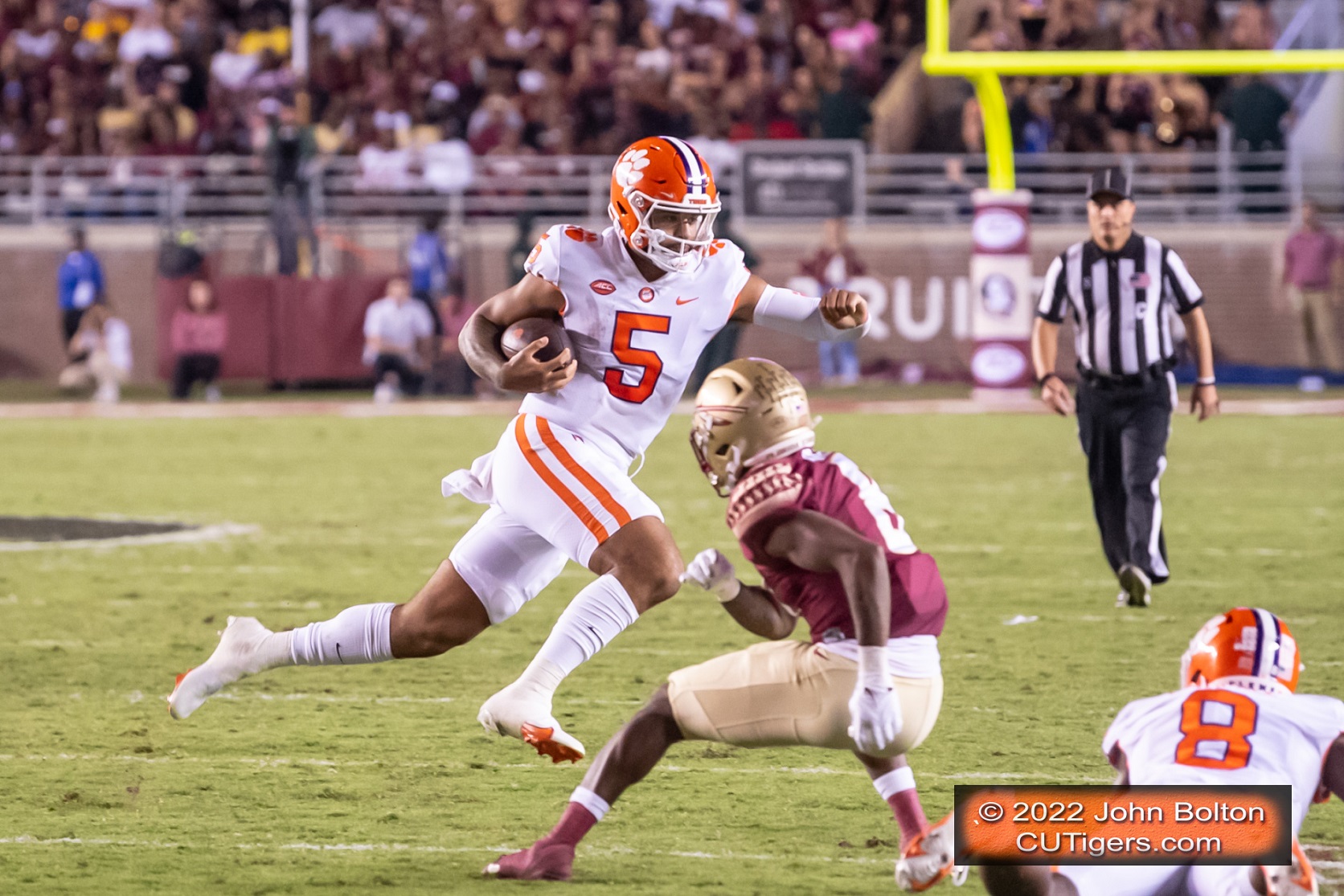 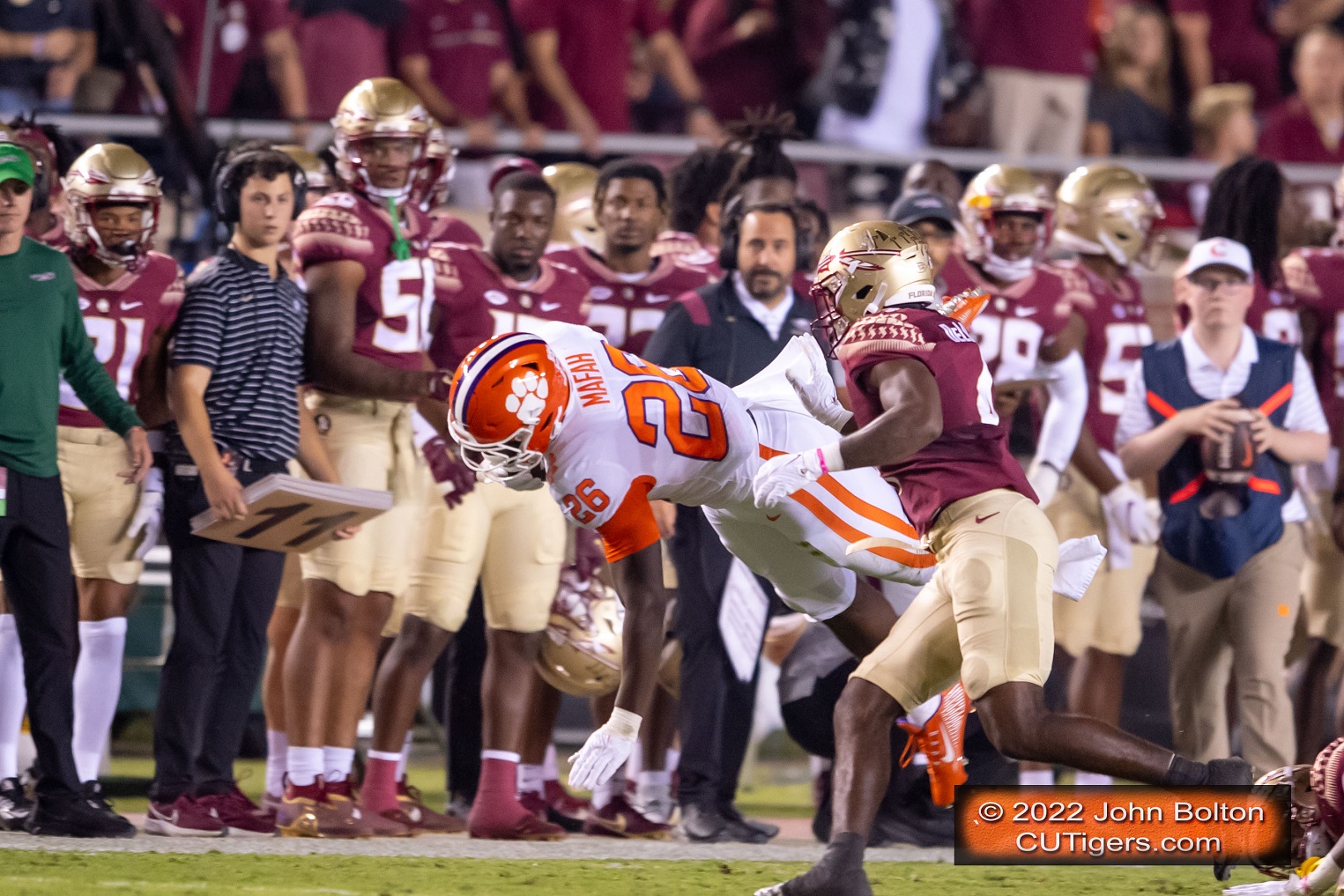 The Tigers extended the nation's longest win streak to 13 and, with no more ACC road games, have all but sealed the division title, which they can officially clinch by beating Syracuse and Louisville in Death Valley. They are now 34-7 in one-score games since 2011 and have won 65 straight when leading at the half! Both of those are best in the nation.

Finally, what a classy and moving gesture by FSU, painting a tribute to the Bresee family just outside the Tigers' tunnel! See our photo below. I asked Dabo about it after the game, and he was very moved by it. He said that when he first noticed it, he ran into the locker room and grabbed Bryan to show him. It just shows that some things transcend sports rivalries!

I’ll have more in a bit. In the meantime, post-game interviews, highlighting and notes are below! 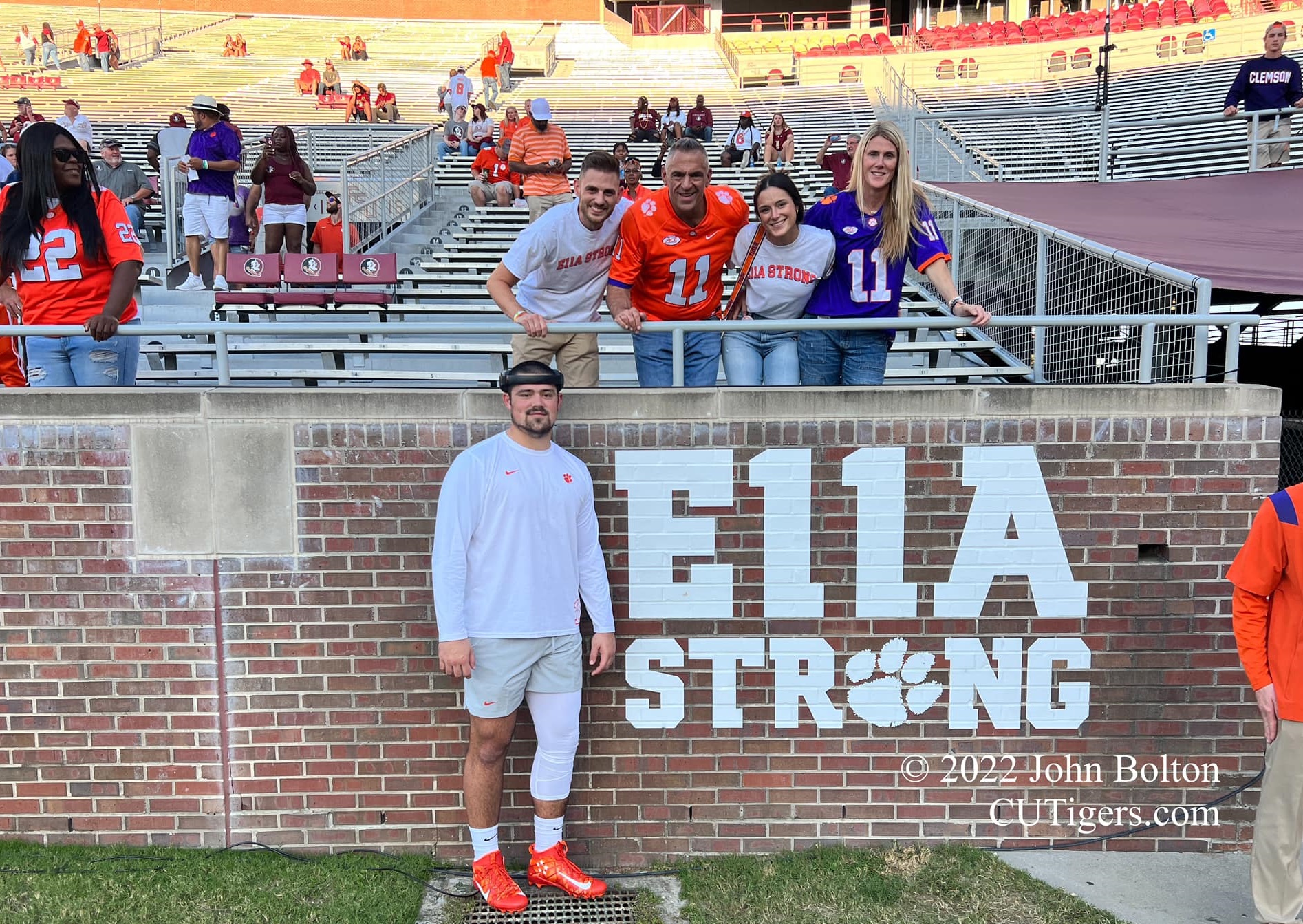