HIGHLIGHTS:
BOX SCORE
CLEMSON, S.C. — It took a season-high 45 minutes, but Clemson University men’s basketball prevailed over Louisville 74-69 in overtime to improve to 3-0 in ACC play for the first time since the 2006-07 season and just the fifth time in program history. 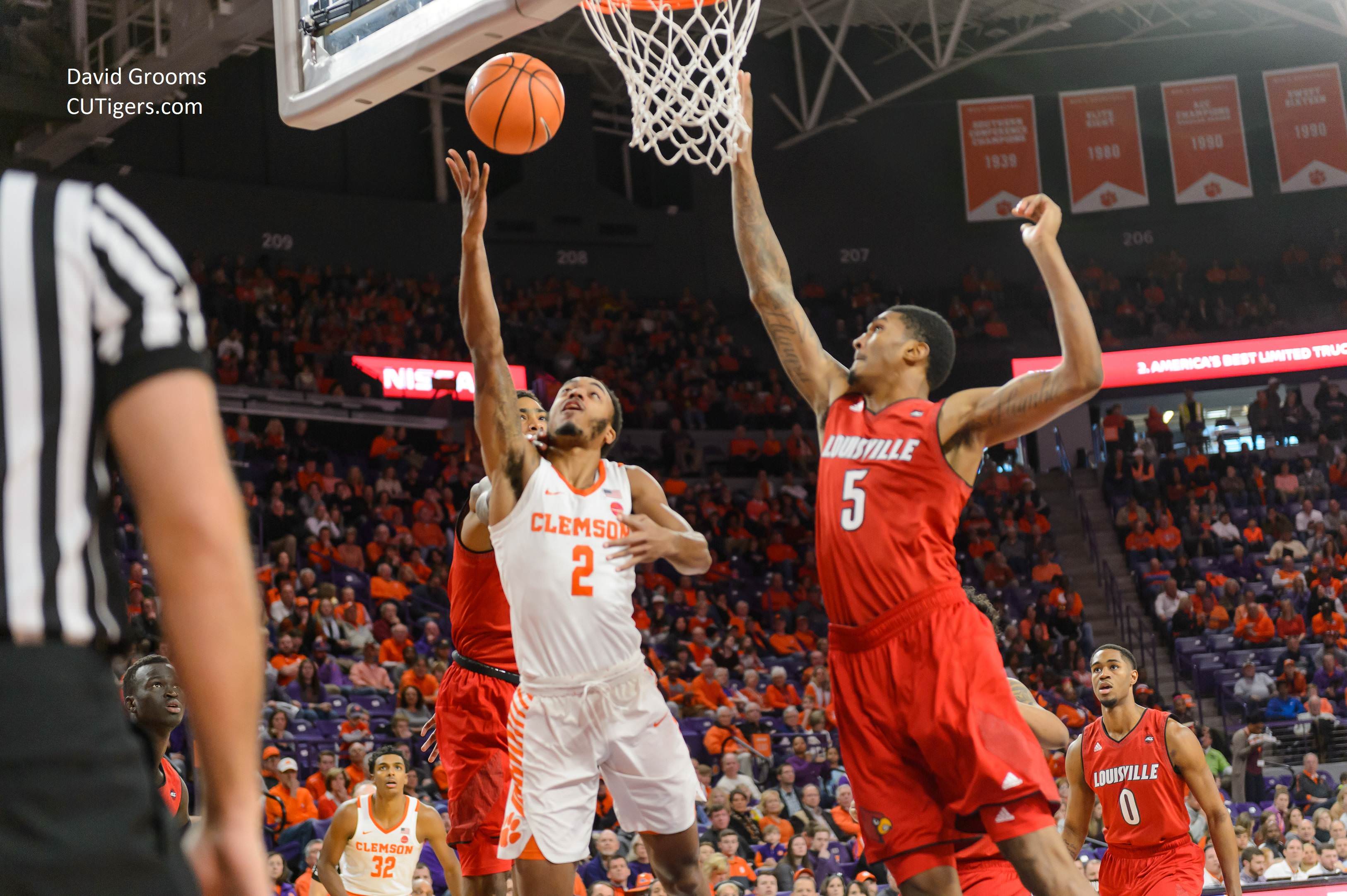 Marcquise Reed led the way for the Tigers (14-1, 3-0 ACC) again with a game-high 24 points and a career-high five steals. Reed and Gabe DeVoe combined for 29 points in the second half to help push the Tigers past Louisville. DeVoe finished with 13 in the contest. 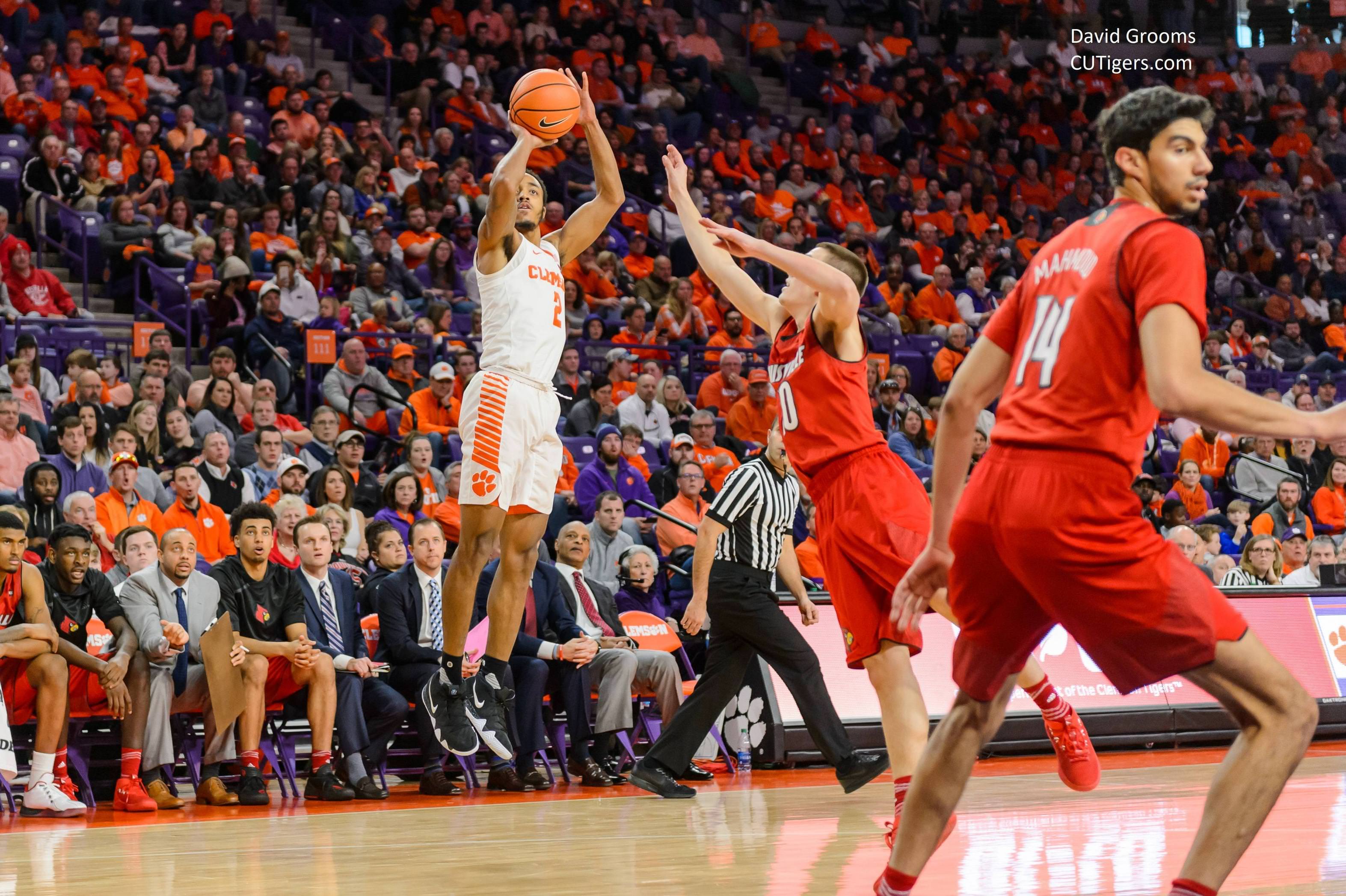 A low-scoring, high-paced affair ended tied 23-23 after the first stanza.
With the Cardinals (11-4, 1-1 ACC) holding a 30-25 advantage at the 16:13 mark of the second half, Clemson engineered a 17-4 run, which featured a Reed three, a thunderous throwdown from Donte Grantham and multiple free throws culminating in a 42-34 lead.
The last nine minutes of regulation would be a grind and the Cardinals pushed a 21-13 run to knot the game at 55-55. The Cards had a chance, but a Quentin Snider three fell off line as the buzzer sounded.
In overtime, the Tigers hit 11-of-14 free throws and got back-to-back dagger threes from DeVoe to seal the five-point victory.
Shelton Mitchell (13 points) and Elijah Thomas (12 points) rounded out the Tigers’ double-digit scorers. Thomas also grabbed 10 rebounds for his fifth double-double of the season.
Grantham led the Tigers with 11 rebounds and chipped in six points in the effort.
The Tigers will return to the court on Thursday, Jan. 11 at NC State with a 9 p.m. tipoff from PNC Arena. The game will be nationally broadcast on ESPN.
Notes: Clemson improves to 14-1 on the season (best start since 2008-09) … the Tigers earned just their second win in seven tries against Louisville and its second in the last three contests … it marked the Tigers’ first home win as a nationally ranked team since a Jan. 13, 2010 win over No. 12 North Carolina (83-64) … with the win Brad Brownell tied Oliver Purnell for third on the all-time list of victories at Clemson (137) … also with the win the Tigers extended its win streak to 10 games … the Tigers have now started 3-0 for the fifth time in program history (1979-80; 1986-87; 1996-97; 2006-07; 2017-18) … of those previous seasons, the Tigers averaged  24 wins per year … Marcquise Reed finished with a career-high five steals … it was Reed’s fourth 20-point game of the season … Elijah Thomas collected his fifth double-double of the season … Donte Grantham grabbed double-digit rebounds for the fifth time this season.