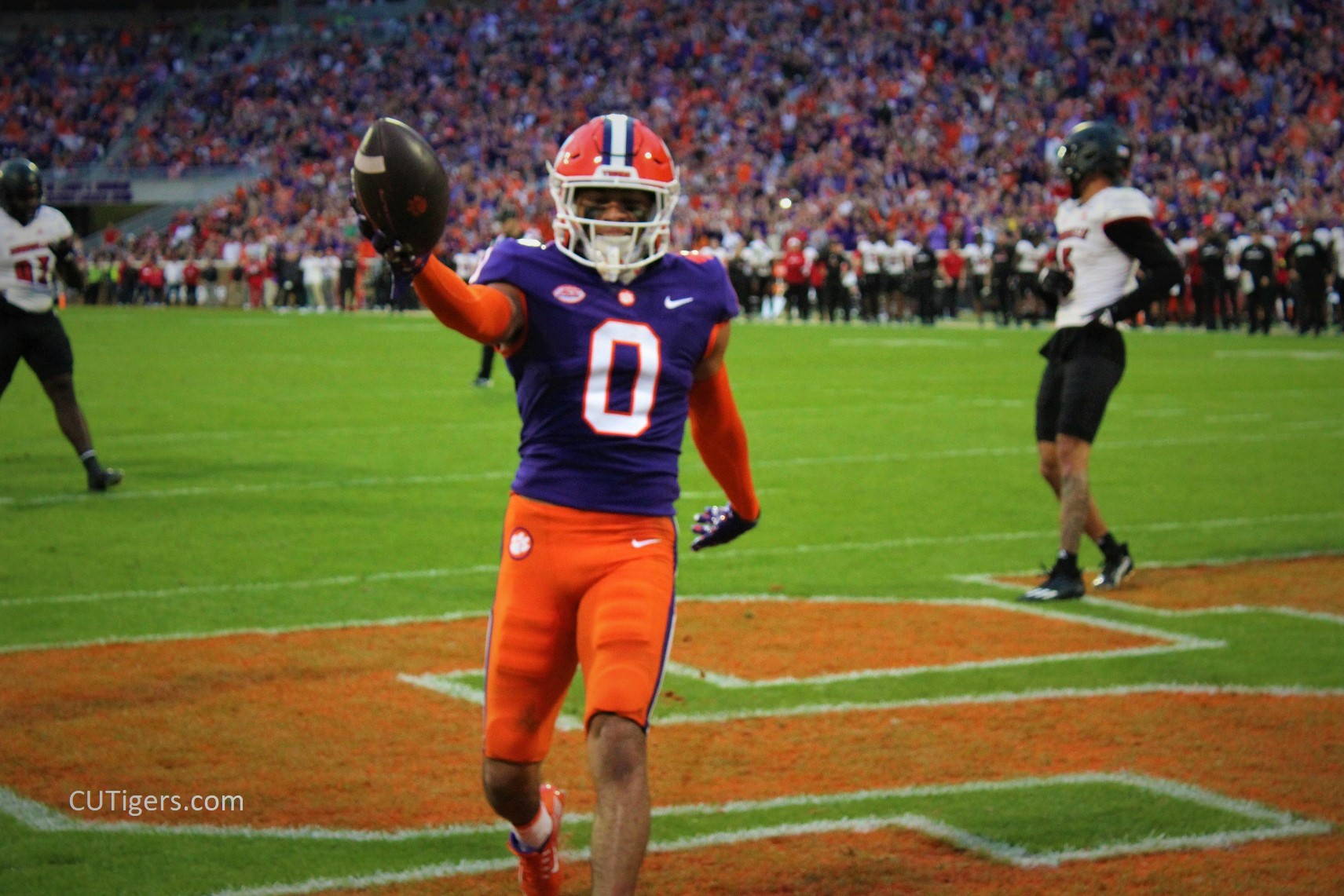 Photo by Trevor Groves
CLEMSON, SC - The Tigers bounced back from their embarrassing loss at Notre Dame last week, dominating Louisville from start to finish on Military Appreciation Day in Death Valley Saturday. They already had secured a spot in the ACC Championship but clinched the outright Atlantic Division title with the 31-16 win over a red-hot Louisville team that came in with 4 straight wins. It's Dabo's 9th division title, counting the shared title in 2012 and not counting the division-free 2020 season, and he came full circle with the uniforms on Saturday. Traditionally under Dabo, the Tigers have worn all purple on Military Appreciation Day to represent the Purple Heart medal. However, in his first full season of 2009, Dabo broke out the Orange Britches because the Tigers had the opportunity to clinch their first division title, which CJ Spiller and company did. I asked Dabo on Wednesday if he planned to wear the same purple and orange combo, and he kind of ducked the question. I think he wanted it to be a surprise. It's interesting, though, because this is the last year of divisions for the ACC, so the Tigers clinched their first and last division titles in the purple and orange. 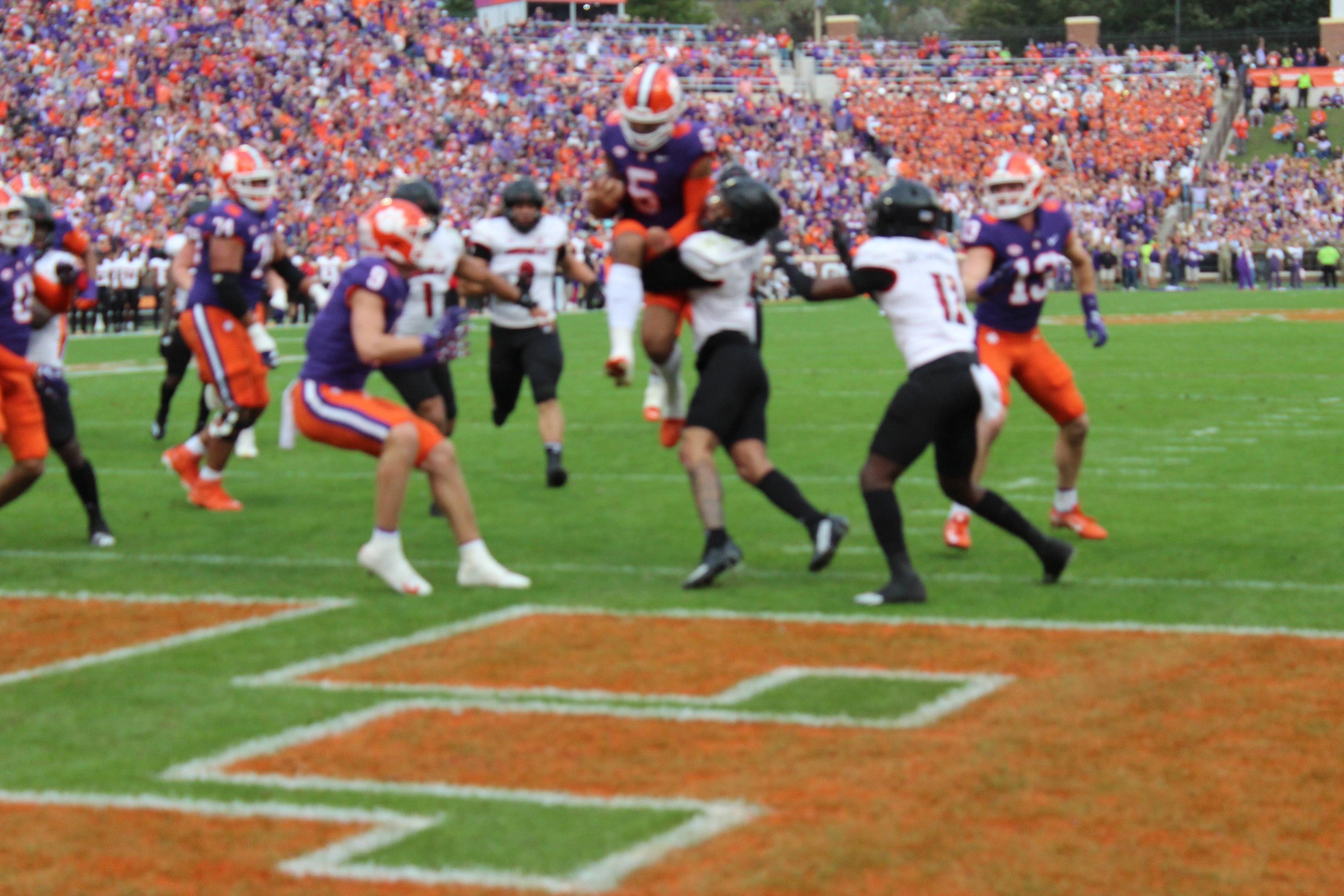 The Tigers received the ball first and scored on their opening possession for the 7th time in 10 games. It was looking like the Tigers would have to punt after 5 plays, but Ngata came up with a huge 24-yard catch on 3rd and 15 to keep the drive alive and, most importantly, give DJ some early confidence. It was do or die for him, as Dabo would indicate after the game, so if DJ performed like he did against Syracuse or the first 3 quarters at Notre Dame, Dabo would have given the next start to freshman Cade Klubnik. The completion to Ngata seemed to ignite the DJ we saw in the first 7 games. After a 17-yard run by Shipley to the 12, DJ ran 11 yards for the touchdown. I thought Shipley was going to score because he faked the defender out of his shoes, but he employed one juke too many and ended up tripping himself up. He was headed straight for me in the back of the end zone, as I was shooting photos on the field for this game. My two photographers were at a family wedding, so I was down on the field instead of the press box as usual. I apologize for the shots below being out of focus! It's been a while since I had to shoot myself, and I need a new camera. I did manage to get some good shots of Antonio's touchdown. He walked right to me and got in my face in the back of the other end zone! I also was able to get some good video from the field, including the halftime tribute to the fallen. See below! It's the only time you can hear a pin drop in Death Valley. I'll add some more video footage along with the highlights and post-game interviews!
The Tigers' defense forced 3 straight 3-and-outs, aided by a Bryan Bresee sack. They took a 10-0 lead on a field goal by Potter after driving all the way to the Cardinals' 2-yard line. I was a little surprised that Dabo opted for the easy field goal rather than going for it on 4th down, but that's probably a result of how much the offense has struggled in the last couple games, and Louisville has one of the best red zone defenses in the nation. Freshman Antonio Williams had a big 36-yard catch during the drive that started with an 8-yard catch by Drew Swinney! Mafah had an 11-yard run as well.
The Cardinals' offense finally woke up with a 44-yard run by Jordan and a 19-yard completion to Hudson to end the quarter. Evans ran right through the Tigers for a 16-yard touchdown, similar to what we saw at Notre Dame last week. The Tigers went 3 and out, coming up just short of a first down when Antonio slipped and fell just short of the line to gain. However, the Tigers' defense forced a 3 and out as well. The Tigers were poised to add to their 3-point lead, driving to the Cardinals' 36, but DJ was sacked and fumbled for the first turnover of the game. Louisville leads the nation in takeaways, and I was concerned about that coming into the game with the Tigers' recent turnover proclivities. As they have done so often, however, the Tigers' defense got a stop after a turnover. 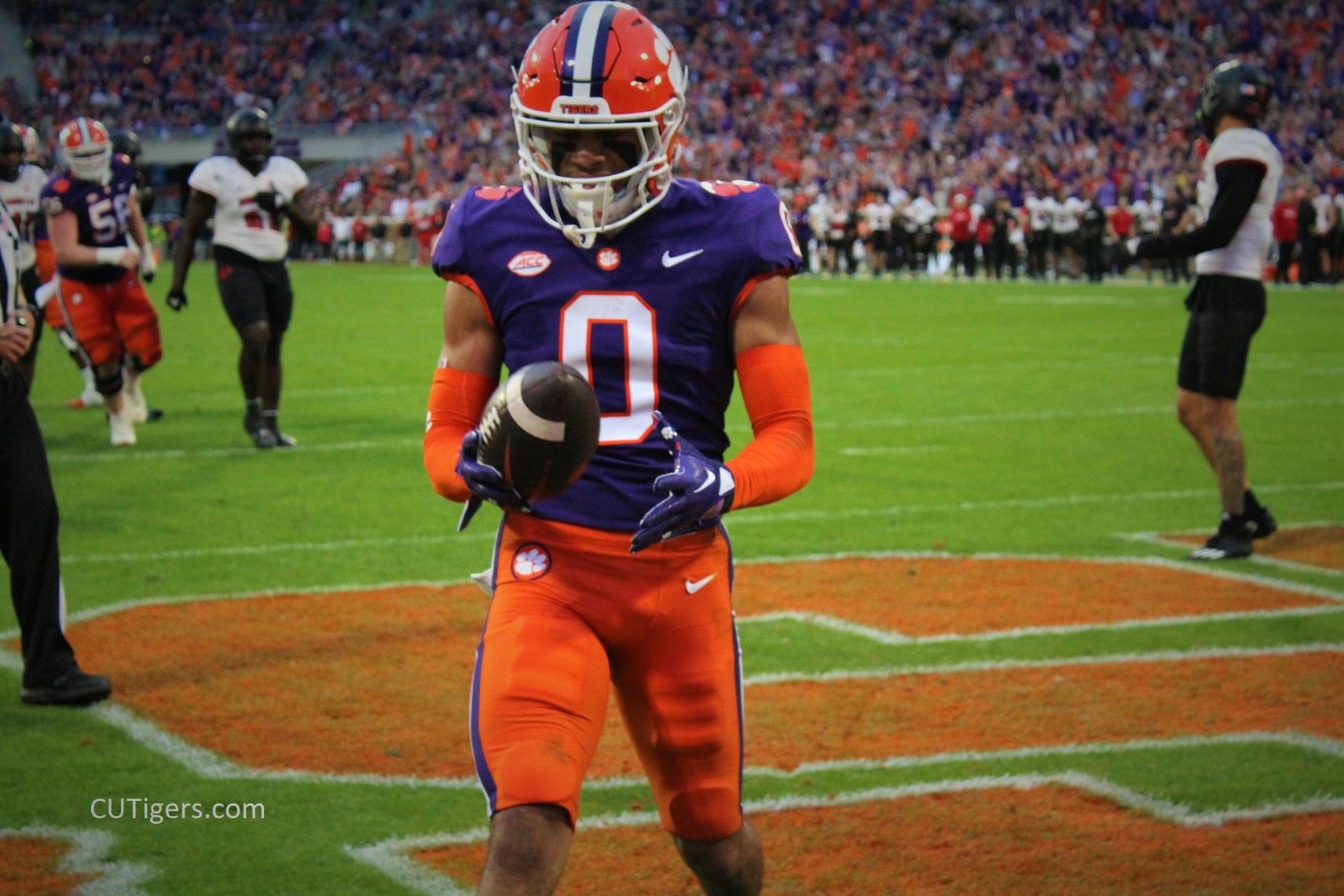 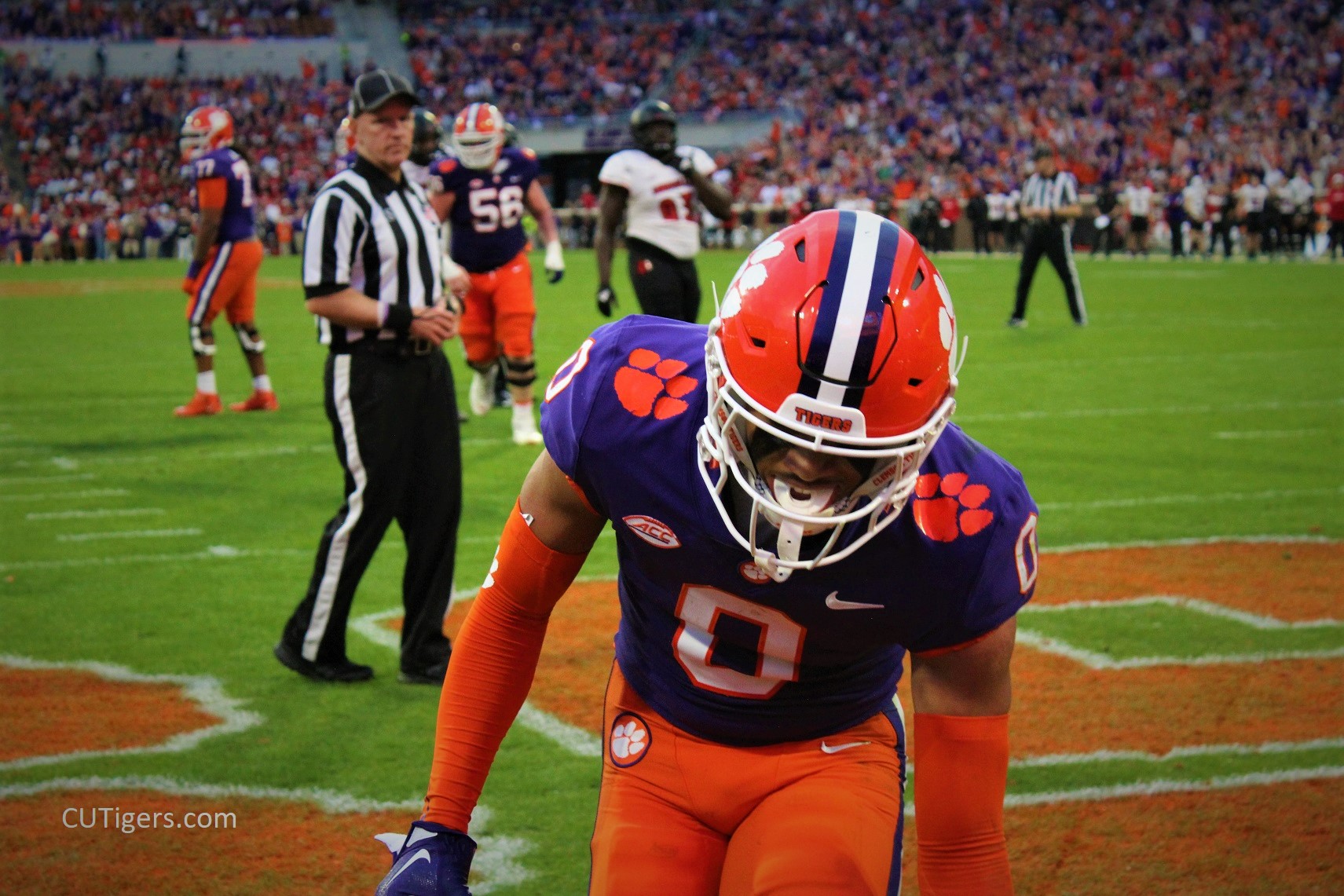 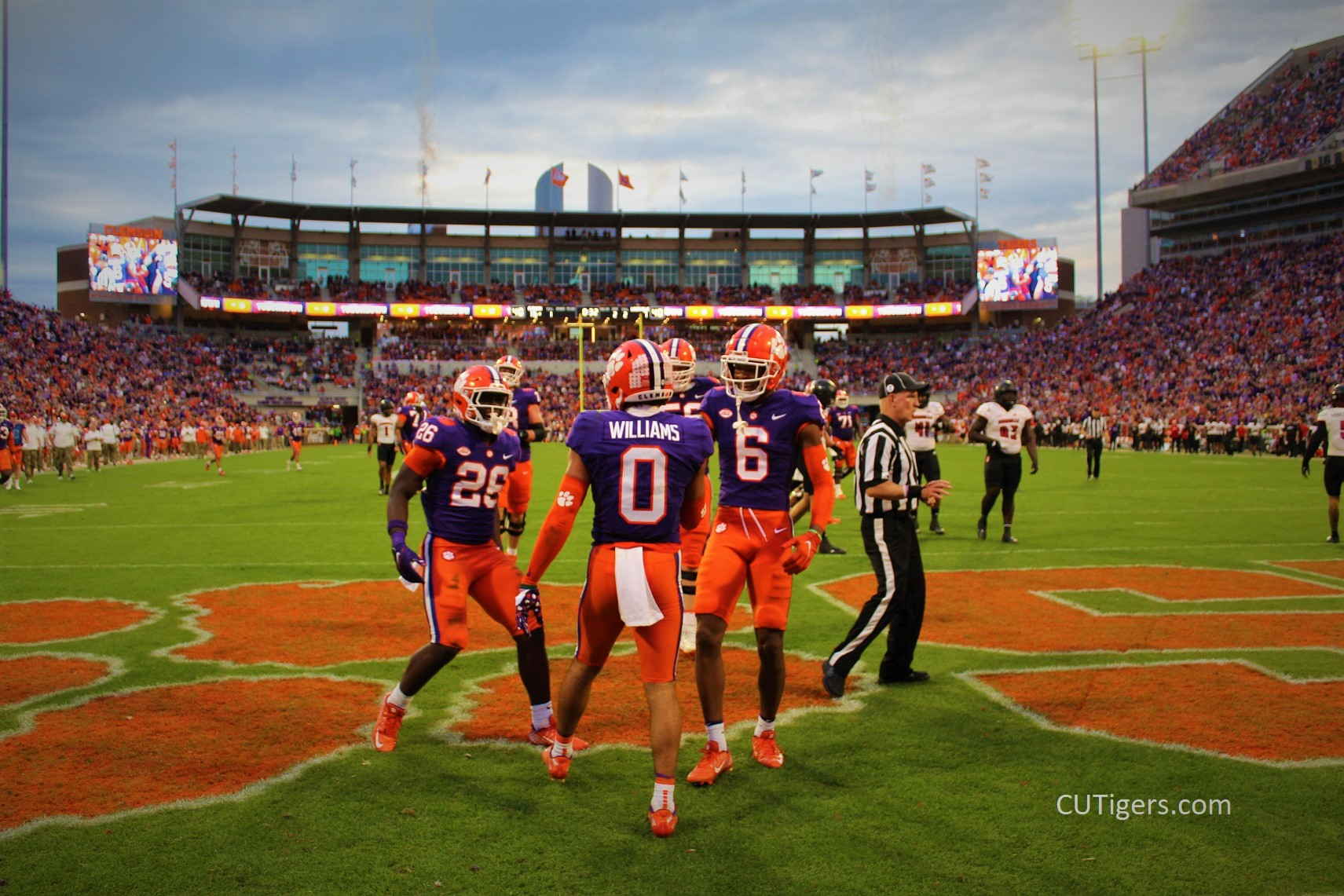 Will Shipley got the drive started with a couple runs for a first down, and the Tigers marched methodically down the field with completions to Allen, Spector, EJ Williams and Antonio Williams for a touchdown, the 3rd of his career. The Tigers benefitted by a big pass interference call on a 3rd and 8 wheel route to Shipley. Honestly, I've seen a lot worse than that not called the Tigers' way this season, so I guess they were due for a break. The TD gave the Tigers a 17-7 lead, and they wouldn't look back. With 2 seconds left in the half, the Cardinals had a Hail Mary opportunity from the Tigers' 40, but Goodwin wasn't going to give them that chance. He brought the pressure and forced Cunningham to take off and run. he put a scare into the crowd with his elusiveness, scrambling for 26 yards before Wiggins finally brought him down at the 14. It would be all Tigers in the second half!
QB Malik Cunningham never came back onto the field for the Cardinals after halftime. He had surgery on his non-throwing hand during the week and was wearing a cast, but it was apparently another injury that sidelined him. The Tigers forced a 3 and out to start the second half and proceeded to put the game out of reach. After a face mask call gave the Tigers good field position, Mafah ran for 25 yards. DJ found Antonio Williams for 12 more yards. He made another catch for a first down at the Louisville 21. Dabo pulled out the trickery with a pass from Antonio to DJ, but the play was negated by a hold on McFadden. On the very next play, however, Will Shipley exploded down the middle and hurdled a defender on his way to the end zone, putting the Tigers up 24-7!
Louisville would make a field goal to make it 24-10 going into the 4th quarter, but after the Tigers forced a turnover on downs, Mafah put the game away with a 39-yard touchdown run for a 31-10 lead. He posted his first career 100-yard game with 106 yards on just 10 carries! He has really emerged over the last 4 games with the absence of Kobe Pace, who probably could have played today and will likely be back next week. Unfortunately, the Cardinals' backup quarterback completed a 31-yard touchdown pass as time ran out to make the final score 31-16.
It was a great bounce-back performance by the Tigers, and suddenly all is right again in Clemson Nation. Just a week ago, it seemed like the sky was falling. Perhaps the loss was what this team needed to wake up. The only real negative from this game is the Tigers' troubling turnover trend, to use a lot of alliteration. They fumbled the ball 4 times against Louisville, losing 3 of them. Shipley went a season and a half without losing a fumble and has now lost 2 in the last 3 games. The good news is that DJ didn't throw an interception, and Louisville does lead the nation in takeaways. They had 8 against Wake alone a couple weeks ago! Still, that's 9 turnovers in the last 3 games for the Tigers after they had just 3 in the first 7 games. They need to get back to their old ways of protecting the football before the ACC Championship! The defense forced 3 fumbles and recovered one, and they also came up with an interception on a great play by Barrett Carter. With Trenton Simpson out due to a concussion, Carter had a tremendous game with the INT and 2 sacks. They could have used him at Notre Dame last week! The Tigers also forced a couple turnovers on downs. Louisville led the nation in sacks but only got the Tigers twice, while the Tigers' defense recorded 4 sacks.
Walker Parks, the Tigers' only Kentucky native, and Will Taylor were also out due to minor injuries. Cade came in for a series in the 4th quarter and did not attempt a pass. He did have a 13-yard run for a first down, though. Center Will Putnam, who's father is a retired colonel, had the honor of carrying the flag down The Hill before the game. Enjoy the videos below!
The Tigers have played 150 games since their last back-to-back losses in 2011! That is the longest streak in the nation, and it speaks to what this program is made of. The Tigers extended the nation's longest home win streak to 39, and they've won 67 straight games when leading at the half. They'll go for a 10th win for the 12th straight season against Miami next week at 3:30 on Senior Day!
Post-game interviews, highlights, notes and more are below!