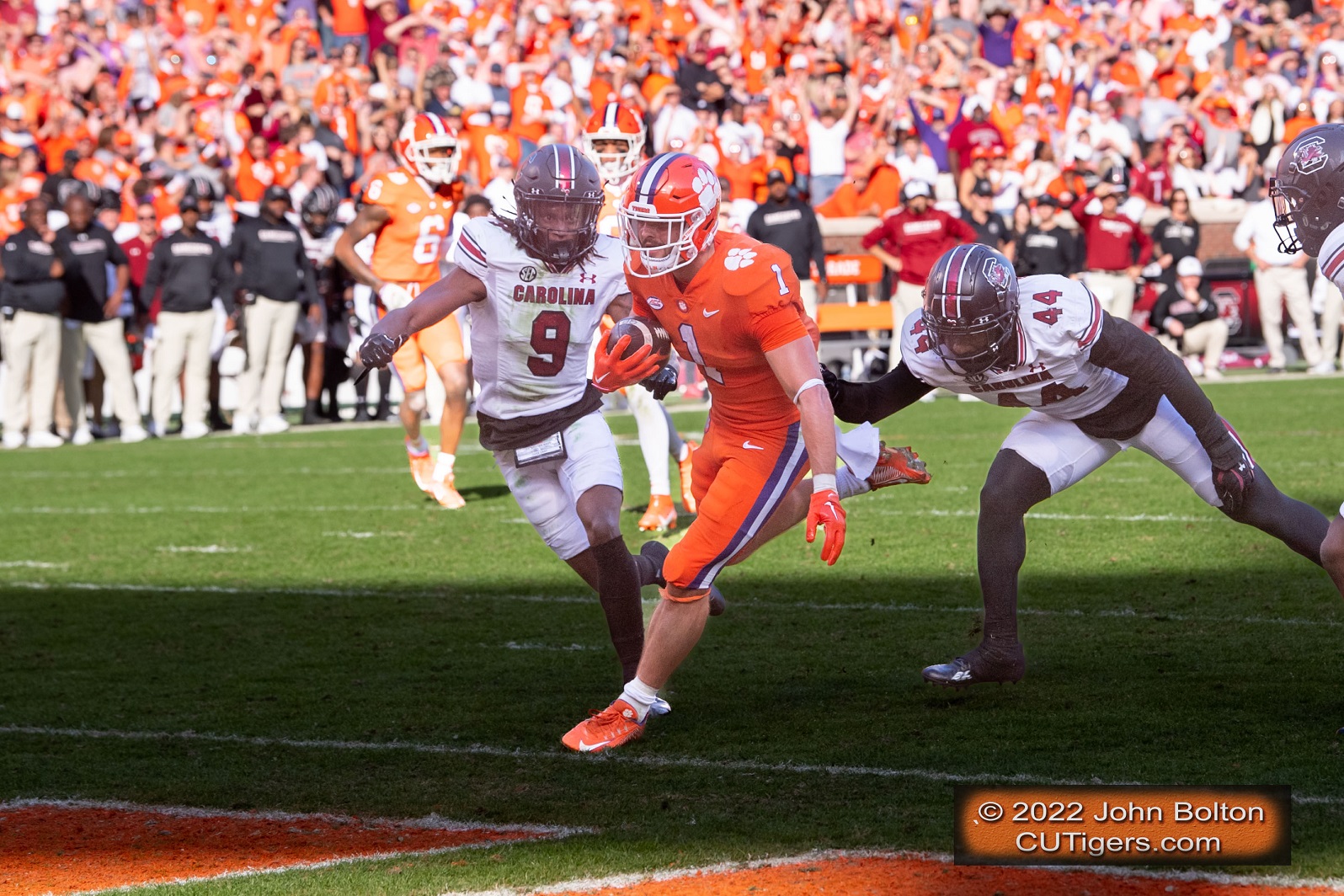 Photo by John Bolton
CLEMSON, SC - Turnovers have plagued the Tigers for 5 straight games now, and they cost them a second loss and an appearance in the College Football Playoff, while snapping a historic 40-game home win streak in Death Valley, giving the Gamecocks their first win in the rivalry in 9 years. I thought that the Gamecocks' 25-point win over No.5 Tennessee last week was a one-time anomaly, but Spencer Rattler and the Gamecocks proved me wrong. They followed it up with another great performance, and you could say that the Tigers were outcoached to an extent. For example, the excellent 4th and one play call in the 2nd quarter caught the Tigers completely off guard. Mukuba ran the player down and prevented a touchdown, and Mickens came up with an interception, but the Tigers gave up big play after big play in the game, and the offense could not overcome terrible field position all day long. I can't remember a game in which the punter should be named MVP, but the Gamecocks' Kroeger, who I mentioned in my preview, would be worthy of such. I can't remember seeing a punter pin a team inside the 5 yard line 3 times in a game, and that was a huge reason for the Tigers' loss. But in the end, the 3 turnovers, including fumbles by Mafah and Antonio Williams, cost the Tigers the game more than anything else. Also, the Gamecocks' tight end Adkins (#44) had the game of his life, and they don't win the game otherwise. He had just 4 catches all season and doubled that on Saturday, including a one-handed catch for 30 yards that set up a touchdown.
DJ did not have a good game either, but he is far from the reason the Tigers lost, despite what most Clemson fans will want to say. In addition to the two fumbles that weren't his fault, receivers dropped passes that hit them in the hands, the offensive line did a poor job giving DJ time, the receivers couldn't get separation, and the defense gave up too many big plays. DJ made some bad throws too, but none of the rest is his fault, and the Tigers still would have won if not for the late fumble by Antonio Williams, the Columbia native who has been one of the Tigers' best players all season. And I'm very incredulous that putting Cade in would have made a difference. He has done very little with his opportunities this season, and when Dabo put him in at Notre Dame, he immediately threw a bad interception to set up a touchdown.
The Tigers did a lot of good things in the game, although it won't take the sting out of this loss. Shipley rushed for 132 yards and a touchdown on 8.8 yards per carry, and Dabo said after the game that he regretted not feeding him the ball more. Trotter had a big pick-six, and Mickens had the score-saving interception as well and Ruke had a sack in the end zone for a safety. The defense had 3 sacks and 11 tackles-for-loss but just gave up too many big plays, including a couple coverage busts by Mukuba, who had one last week against Miami as well.
Before Saturday, the Tigers were 76-1 under Dabo when rushing for 200 yards or more with the only loss in the 2009 ACC Championship when neither team punted the entire game, and it came down to the final possession. They were 126-2 when leading after 3 quarters. The only losses were the 2015 national championship against Alabama and the 2014 overtime loss at defending champ FSU when the Tigers fumbled with the game-winning field goal in their pocket!
It's a tough day for Clemson fans, but try to put things into perspective. This is how Gamecock fans have felt for 9 long years. Clemson fans will undoubtedly go off the deep end and want all kinds of changes to be made, but the biggest change that needs to be made, in my opinion, is bringing Jeff Scott back to coach the receivers. They haven't been the same since he left. The Tigers have continued to bring in 4-star recruits, but they haven't developed and performed the way they did under Scott. There were never chronic issues with dropped passes or receivers not getting open on their routes like we've seen over the past two seasons. Speaking of the receivers, Dabo told me after the game that Beaux Collins left the game because his separated shoulder that caused him to miss the previous two games popped back out. It was right after Collins made a 59-yard catch. So they will be without him in Charlotte and likely the bowl game as well.
There will be no playoff again for the Tigers, but they still have an opportunity to win a 21st ACC Championship and 7th in the last 8 years, as well as an Orange Bowl, possibly against Ohio State, and finish 12-2 if they can stop turning the ball over! I'll have more analysis after I watch the tape. In the meantime, post-game interviews, highlights and notes are below.