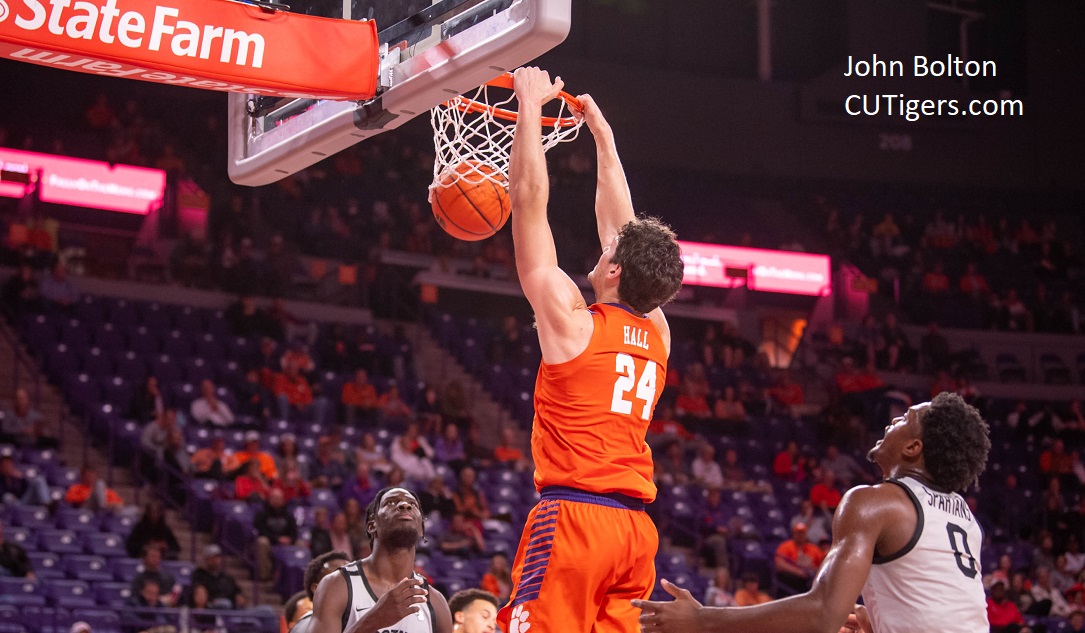 ATLANTA, GA - The Tigers were coming off their most impressive 40-minute performance of the season, leading Richmond by as many as 35 on Saturday in Greenville. The big question was whether they could put two performances like that together away from home? They have been inconsistent away from home this season, playing a lousy first half at South Carolina and playing their worst game of the season against Loyola Chicago in Atlanta a couple weeks ago. They returned to Atlanta on Wednesday to resume ACC play against the Yellow Jackets, and the answer to that question was a resounding yes.
The Jackets simply had no answer for PJ Hall. He got off to a fast start with 8 of the Tigers' first 10 points and dominated for the rest of the game on both ends in the paint. Tech started out in a zone defense, but the Tigers went on an 18-1 run in the first half, so the Jackets switched to man. Their 3-point defense was top-10 nationally coming into the game, and the Tigers, ranked No.15 nationally in 3-point shooting, shot well below their season average (5-18). However, it didn't matter because of the Tigers' superb passing and the combination of Hall, Tyson and Hunter in the paint. They also took care of the basketball, which is key. In their last two wins, the Tigers have averaged 20 assists and 7 turnovers per game. Hall finished with 25 points, 10 rebounds and 3 assists in just 28 minutes. He is about 75 percent from a conditioning and stamina standpoint but getting closer by the week. Hall would be leading the ACC in scoring if he had been playing full games since the start of the season! And what's crazy is that he's this good at 75 percent despite missing the entire offseason. When everyone else was working on improving their game, Hall was having surgeries and rehabbing.
Tyson also had a double-double with 14 and 13, and Hunter scored 14 as well. The Tigers were without starter Alex Hemenway, their best 3-point shooter, due to a plantar fascia (heel) injury that he'd been playing with for a couple weeks, and that accounted for the below average 3-point shooting. But Brevin Galloway stepped up, going 3-6 from 3 for 14 points with 5 assists. Sophomore Ian Schieffelen got the start in Hemenway's absence.
Tech is not the greatest team, but they were 7-4 and Pastner is a good coach. Plus, it's tough to win any ACC game on the road! Just look at Duke losing by 9 at Wake, who the Tigers beat by 20. Or No.6 UVA losing at Miami! The Tigers led by as many as 22 with 5 minutes left in the game without a key starter on the road. That's impressive in my book, and a great way to go into Christmas! The Tigers are now 10-3 overall and 2-0 in ACC play.
Post-game interviews and highlights are below!
MORE CLEMSON BASKETBALL AND FOOTBALL COVERAGE HERE