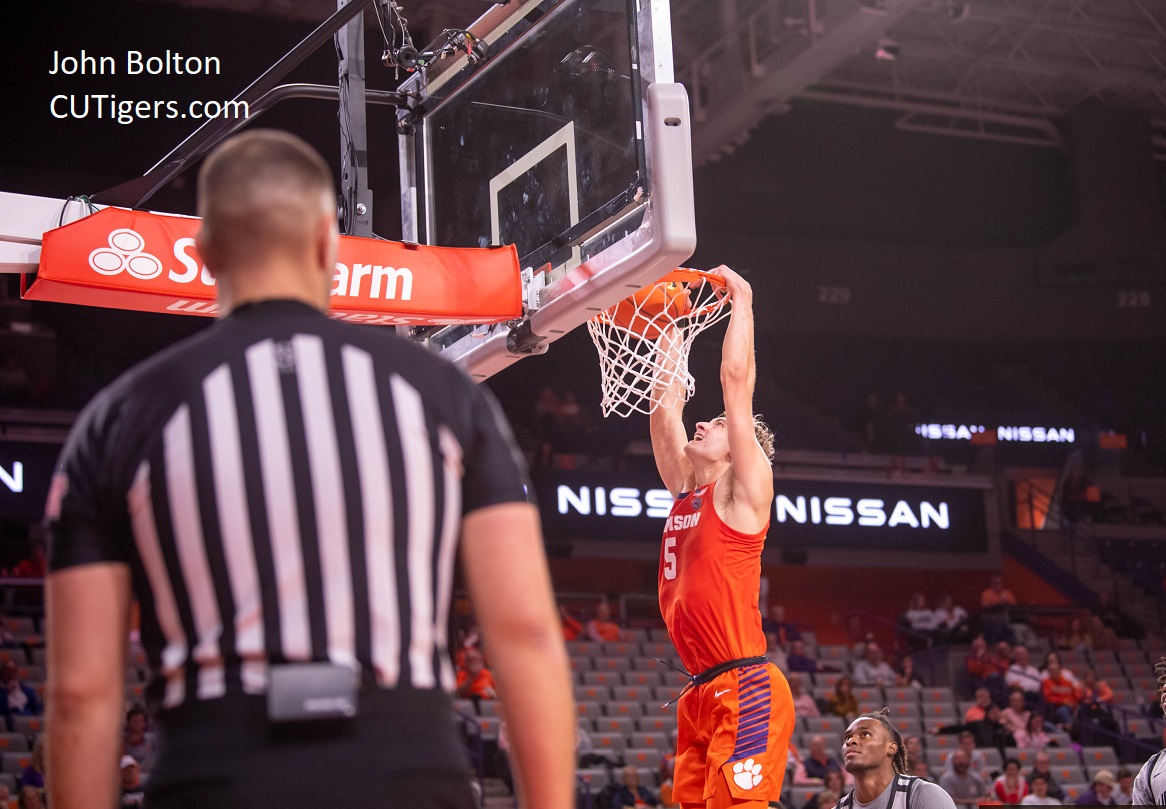 The Tigers were coming off a 14-point win over a hot NC State team that blew out No.16 Duke on Wednesday night, and Hunter Tyson was coming off a career-high in points and rebounds with 31 and 15 against NC State. He is the first Tiger to post 30 and 15 since Horace Grant in 1986-87! Going into Blacksburg, he was the Tigers' leading scorer at 15.6 points per game and averages 9.7 rebounds per game with 7 double-doubles this season. Middlebrooks also scored a career-high 10 points last week.
The Tigers lost to the Hokies on a last-second 3 in overtime in the ACC Tournament, and the Hokies went on to win the tourney. Clemson and Pitt are the only two teams still undefeated in ACC play, and the Tigers have won each game by at least 13 points.
They knew they were in for a test on Wednesday, though. Blacksburg is always a tough place to play, and Mike Young has a really good team this season. Mutts is a handful in the paint, and Pedulla is a force in the back court. Fortunately for the Tigers, their best 3-point shooter, Hunter Cattoor, missed a second straight game due to a recent injury. Junior Lynn Kidd, who was at Clemson as a freshman two years ago, started for the Hokies.
It was a close game throughout. The Tigers led for most of the first half and by as many as 8 points, but the Hokies took a one-point lead into halftime and continued to lead for the first 7 minutes of the second half. The Tigers regained the lead and stretched it to 8 points, but the Hokies went on a 9-0 run to retake the lead. Hall was in foul trouble for much of the game, and with 5:44 left, he came off the bench with 4 fouls after Godfrey fouled out. A couple minutes later, Hall hit a clutch turnaround jumper to end the Hokies' run and give the Tigers a one-point lead. The Tigers made some clutch free throws down the stretch and played great defense. They had a chance to put the game away in the final seconds, but redshirt freshman made just one of two at the free throw line with 7 seconds left. That left the door open for the Hokies, trailing by 3 points, to tie the game. It was the exact same situation against Penn State at the end of regulation. Brownell opted not to foul, and the Lions made a 3-pointer with 5 seconds left to send it to overtime. Once again, Brownell elected not to foul, but this time, the Tigers got lucky and Pedulla air-balled the would-be tying 3-pointer.
It was a huge Quad one road win for the Tigers against an upper-tier ACC team! The Tigers are now 4-0 in ACC play for the first time since I was an undergrad in 1996-97! Rick Barnes took them to the Sweet 16 that year. Tyson and Hall each scored 13. All 4 regular starters scored in double digits. Alex Hemenway has missed the last 3 games with plantar fascia in his heel, and Brownell said he will probably miss the next game. True freshman RJ Godfrey had a big game, scoring a career-high 10 points with a pair of 3's. Beadle did a nice job defensively, and Middlebrooks has been playing well lately. Clemson and Pitt are the only two teams still undefeated teams in ACC play, and they will collide on Saturday in Pittsburgh! The Panthers just upset UVA at home and also knocked off UNC, so the Tigers will have another tough road test on short rest and heavy travel.
Post-game interviews and highlights are below!
MORE CLEMSON BASKETBALL AND FOOTBALL COVERAGE HERE