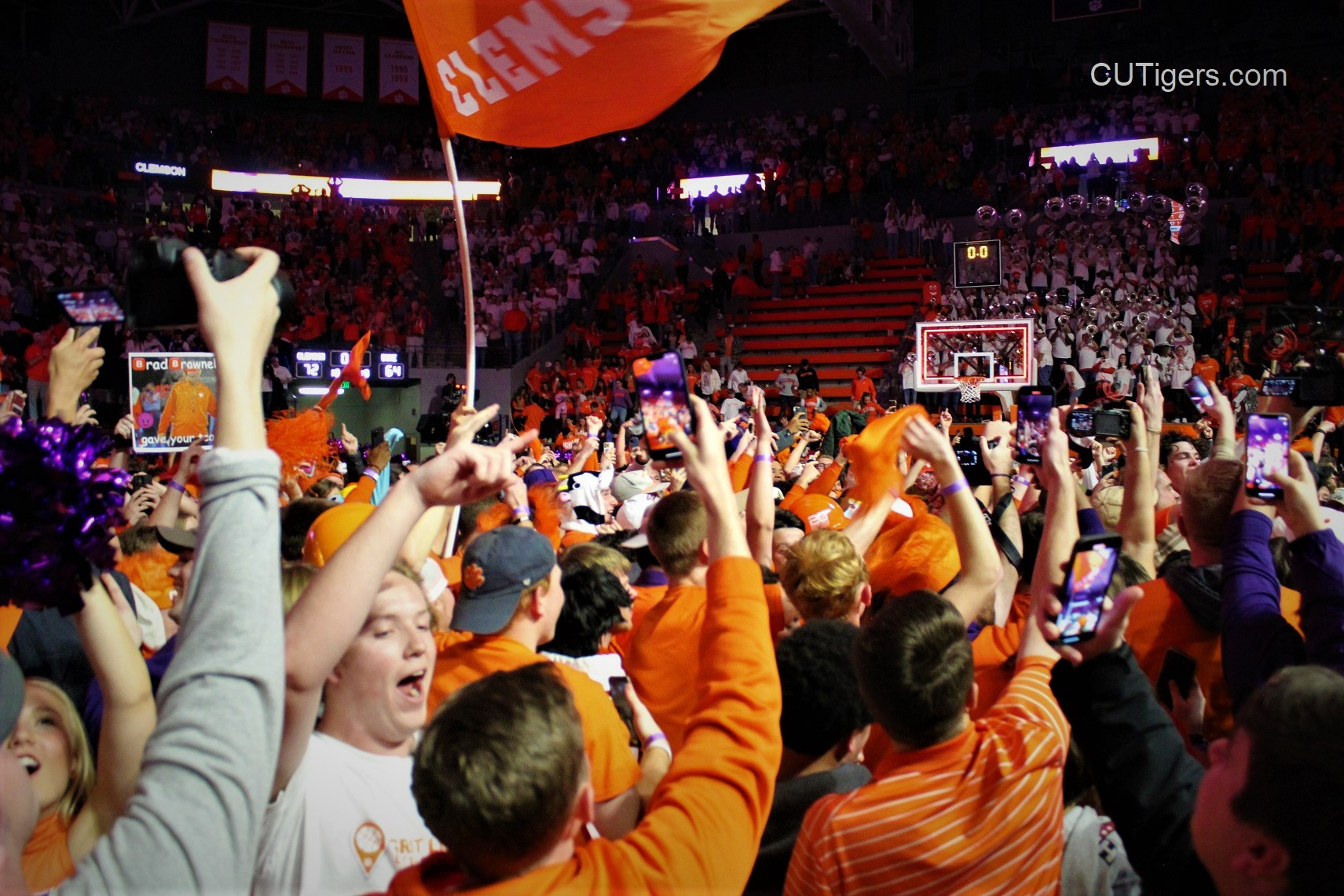 
CLEMSON CONTINUES HISTORIC SEASON WITH 72-64 WIN OVER NO.24 DUKE

Photo by Trevor Groves
CLEMSON, SC - What a basketball game! It was an intense, back-and-forth slug fest as the Tigers looked to beat their first ranked team of the season and remain undefeated atop the ACC standings in front of a sold out Littlejohn. It was the best crowd I've seen in years and an electric environment from start to finish, with the crowd storming the court after the Tigers' 72-64 win. Brownell said after the game that he'd like to see the fans storm the court after a bigger accomplishment than simply beating a ranked Duke team, but I think it probably had more to do with the historic 7-0 start to ACC play than the opponent they beat.
Head Coach Jon Scheyer told me after the game that their strategy was to lock down Hunter Tyson offensively, and they did just that. The Tigers' leading scorer was scoreless at halftime and finished with just 7 points after a 28-point game on Wednesday. However, PJ Hall was sensational, scoring 18 of the Tigers' 30 first-half points and finishing with 26. Chase Hunter did not play to his standard either, but Brevin Galloway picked up the slack with 17 points, including two of the Tigers' three 3-pointers and a couple huge buckets down the stretch. And that's what has made this Clemson team so good. On any given night, Hall, Hunter or Tyson can carry this team offensively, and the bench has been outstanding. Today, sophomore Ian Schieffelin probably had the best game of his career defending Duke's 7-foot freshman star Kyle Filipowski. While Filipowski posted a double-double with 18 points, Ian made it hard for him and had several big plays on both ends of the floor, especially in the final 3 minutes of the game. Middlebrooks and Beadle were also great off the bench today. 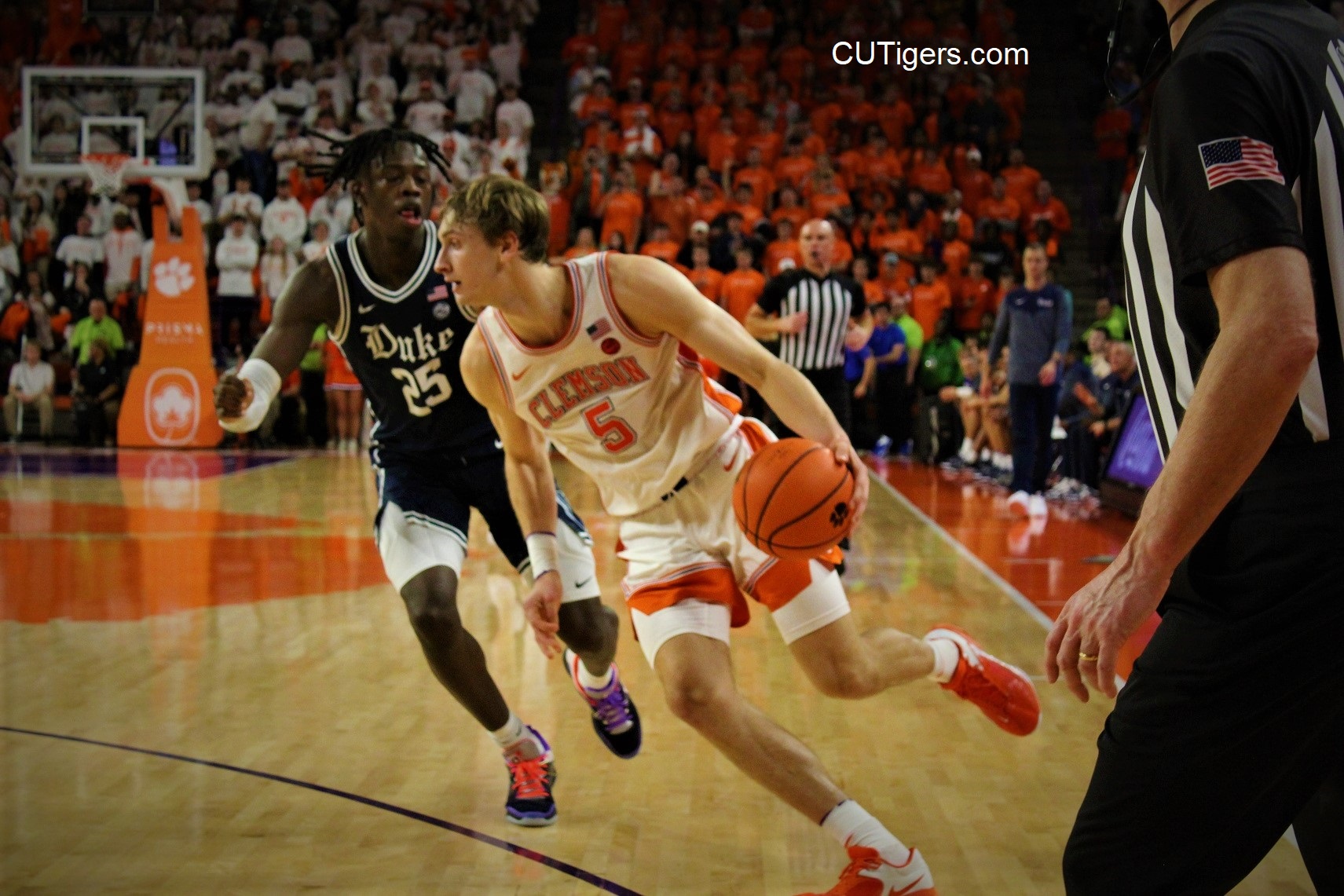 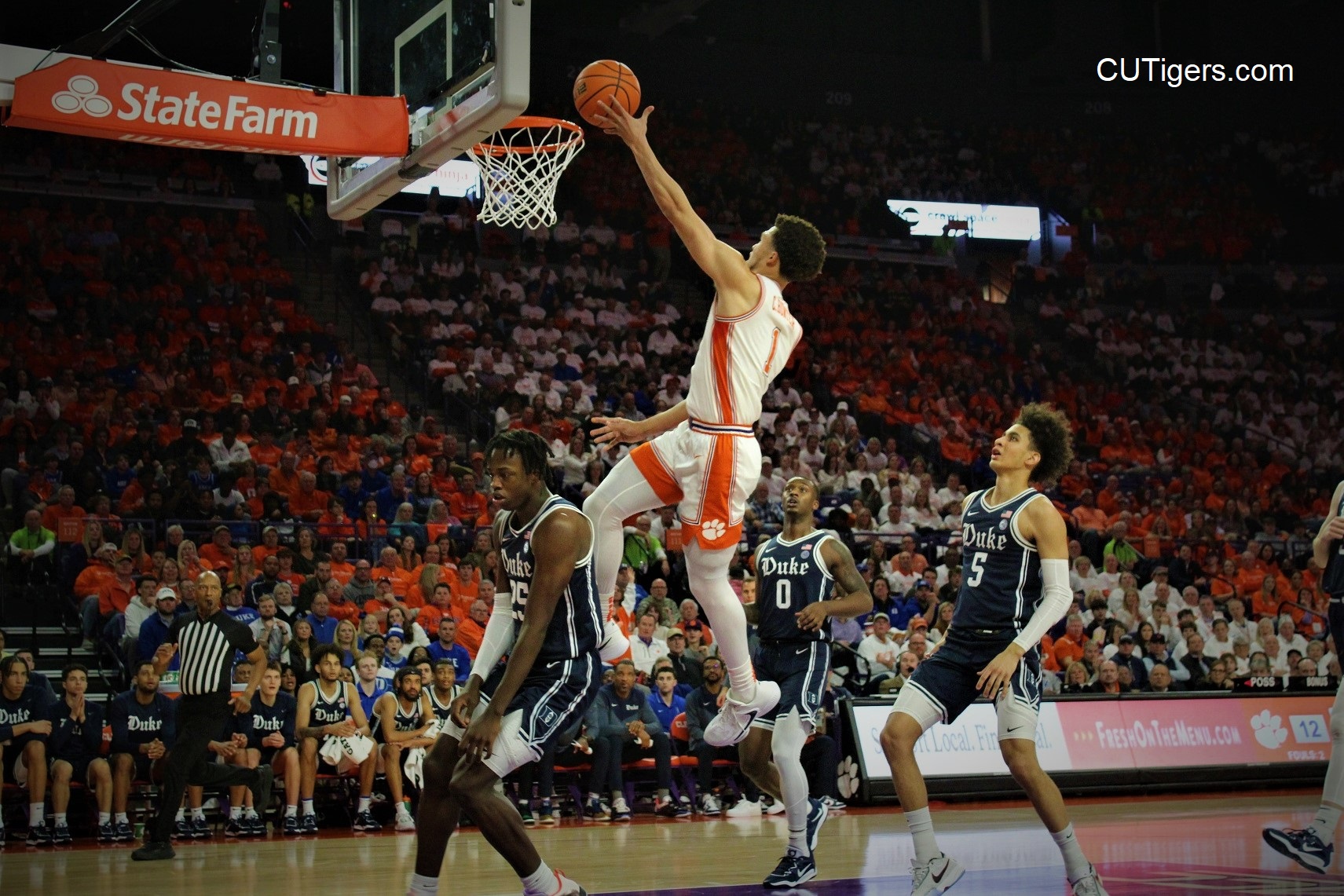 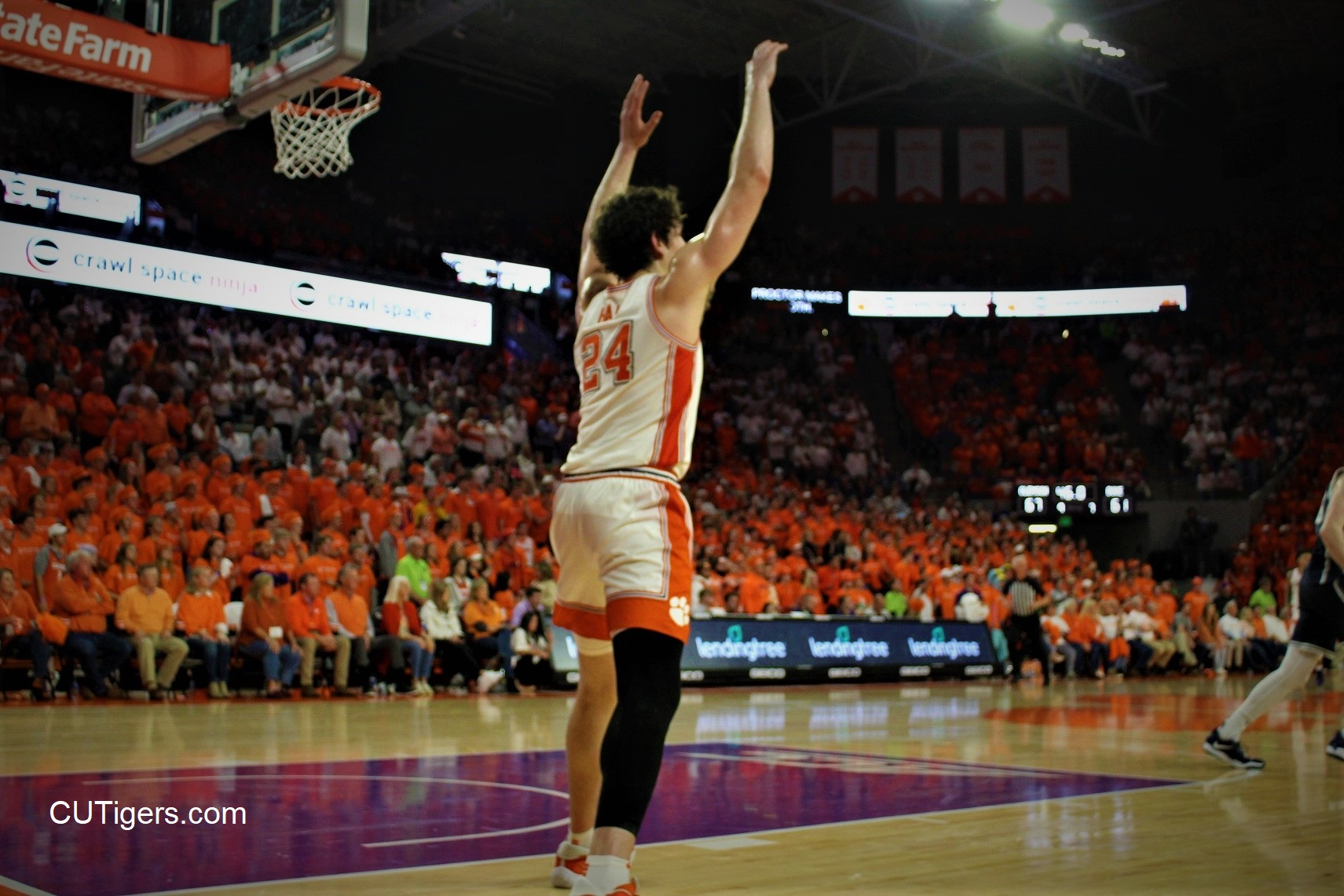 The Tigers have been the best 3-point shooting team in the ACC but were just 3-17 from the arc today. They have proven that they can win in different ways, and today it was in the paint with Hall and company. A big part of their 7-0 start in ACC play, which hasn't been discussed at all, has been their superb free throw shooting, and the Tigers were 15-18 from the line today. I would have brought it up a few games ago but didn't want to jinx it! The Tigers have also protected the basketball in the 7-game win streak, and they had just 9 turnovers today. Many may have still wondered if this Clemson team was for real, and I think they proved it today. The Tigers were down by as many as 8 points at a couple different points in the game but battled back, and the moment was never too big for them.
I said last Saturday that the Tigers should be ranked this week. The AP voters had them two spots outside the top 25, but this will wake them up, and the Tigers will surely be ranked next week for the first time in a couple years. They are 7-0 for the first time ever in 70 years of ACC basketball and have won 11 straight regular season ACC games for the first time ever! It was also their 13th straight home win and Brad Brownell's 400th career win as a head coach. At 15-3 overall and a 2-game lead on the rest of the ACC, the sky is the limit for this team if they can stay healthy. Their best 3-point shooter and starter, Alex Hemenway, missed a 6th straight game with plantar fascitis in his foot, and when they eventually get him back, they will be even tougher to beat. Could this be the team that gives Clemson its second regular season ACC title? Time will tell, but it's been a magical ride so far! The Tigers are at Wake next on Tuesday before another Saturday home game against VA Tech. The Tigers blew out Wake at home a few weeks ago, but it will be a tough game on the road, and everyone in the ACC will be gunning for the Tigers now.
Post-game interviews and highlights are below! 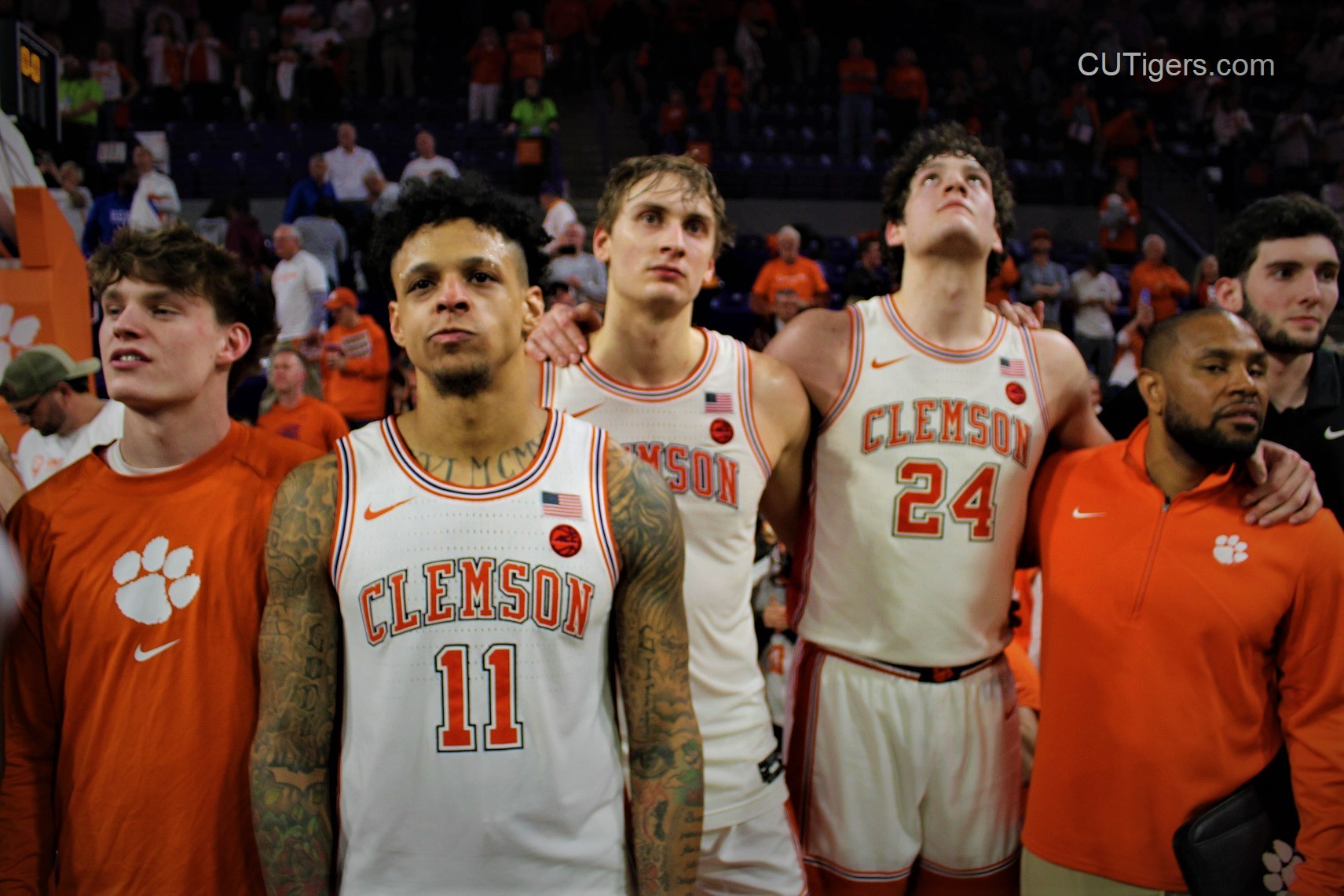