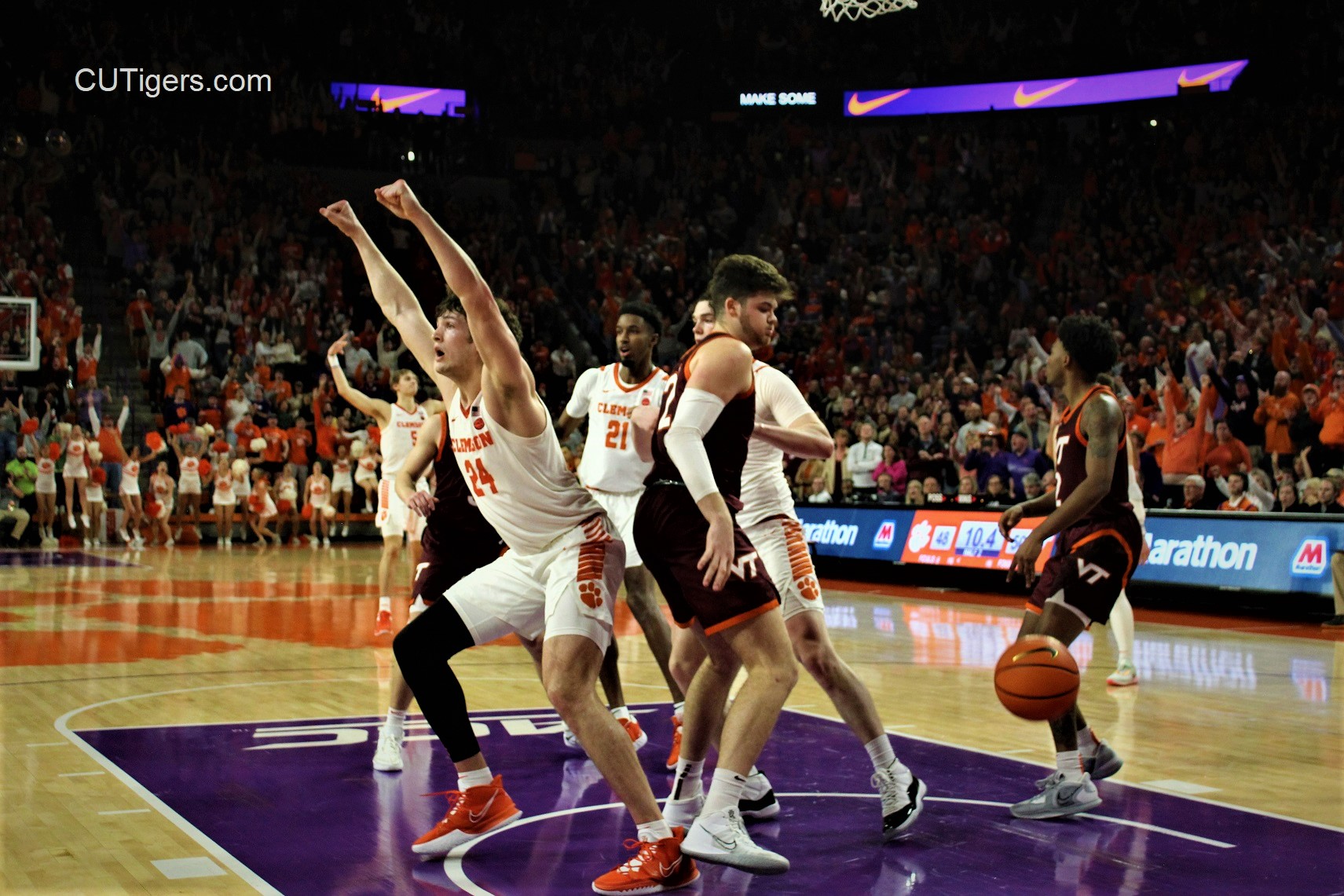 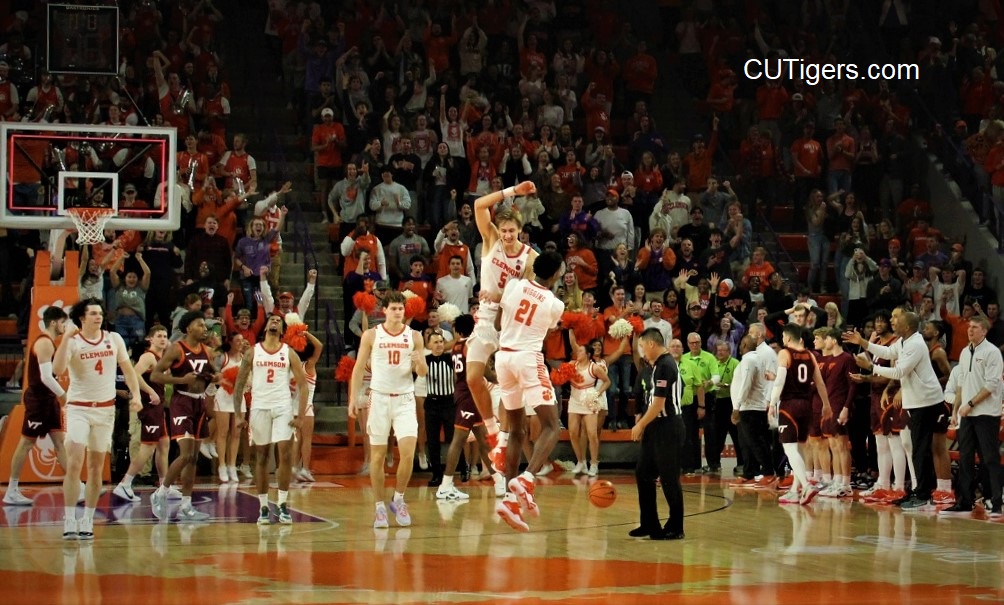 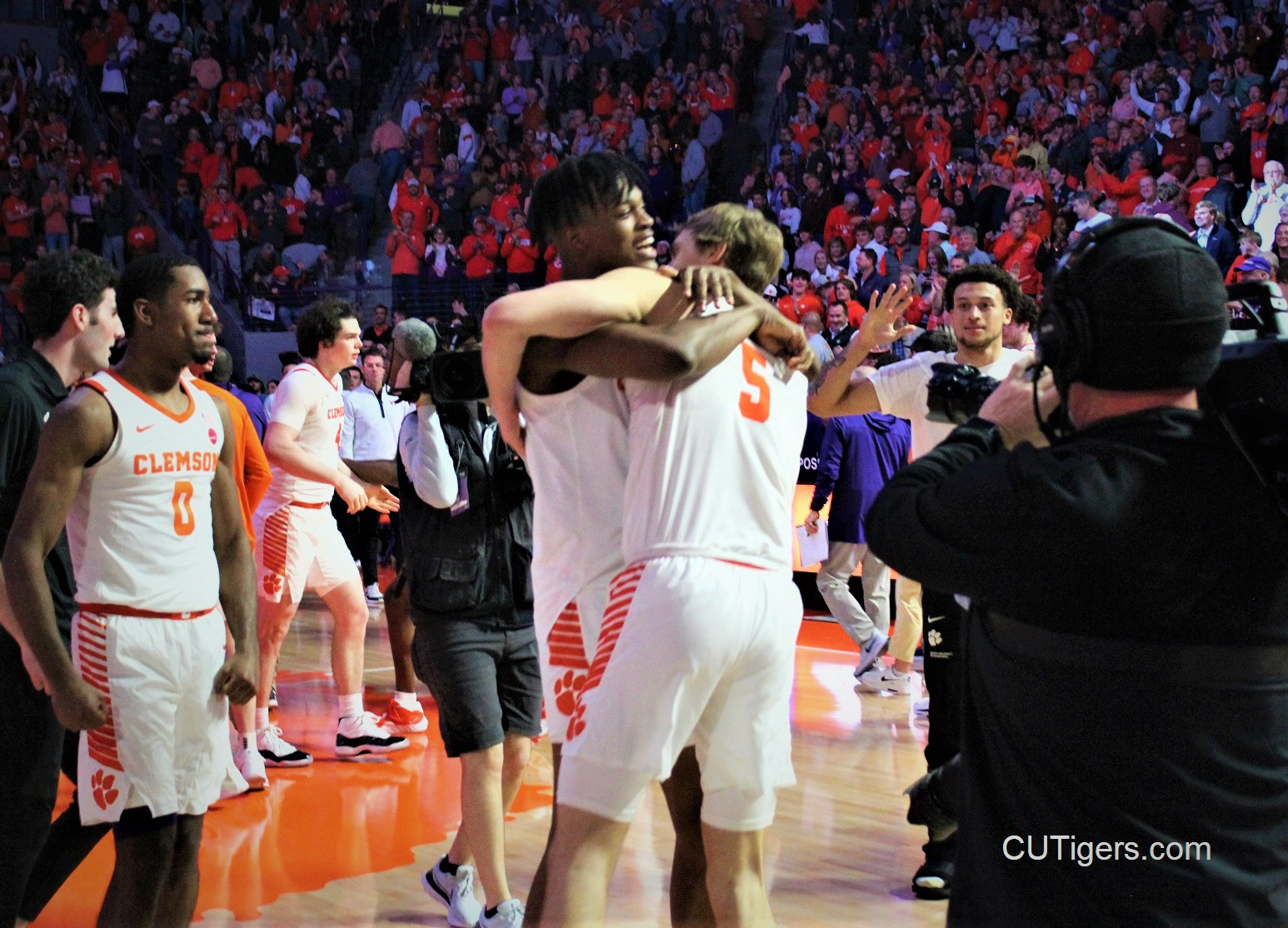 CLEMSON, SC - What a game! For the second Saturday in a row, it was an electric crowd in Littlejohn for another barn-burner. Down 50-48 with 14 seconds left, Brad Brownell called a timeout to draw up a game-winning play. The television broadcasters were convinced that he would force the ball to Hall in the paint to go for the tie, especially the way Hunter Tyson and the Tigers had struggled from the arc. In fact, they were 0-8 from the 3-point line in the 2nd half and just 2-17 in the game! But it must have been a Jimmy Chitwood moment in the huddle from the movie Hoosiers, with Tyson playing the part of Chitwood and telling his coach, "I'll make it." Brownell drew up a great play to get Tyson the ball at the top of the key, and after a great shot fake and dribble to the right, he drilled the game-winning 3-pointer for a perfect swish, just like in the movie! You have to trust your best players in those moments, and Brownell did just that, even though Tyson was just 1-5 from the arc before that fateful shot. There was enough time left on the clock for the Hokies to get a good 3-point attempt for their best shooter, Hunter Cattoor, but he missed and the Tigers held on for the thrilling 51-50 win. You may recall that the Hokies hit a buzzer-beater 3-pointer to beat the Tigers by one in overtime at the ACC Tournament last season and went on to win the tourney, but this time, the Tigers had the last laugh. 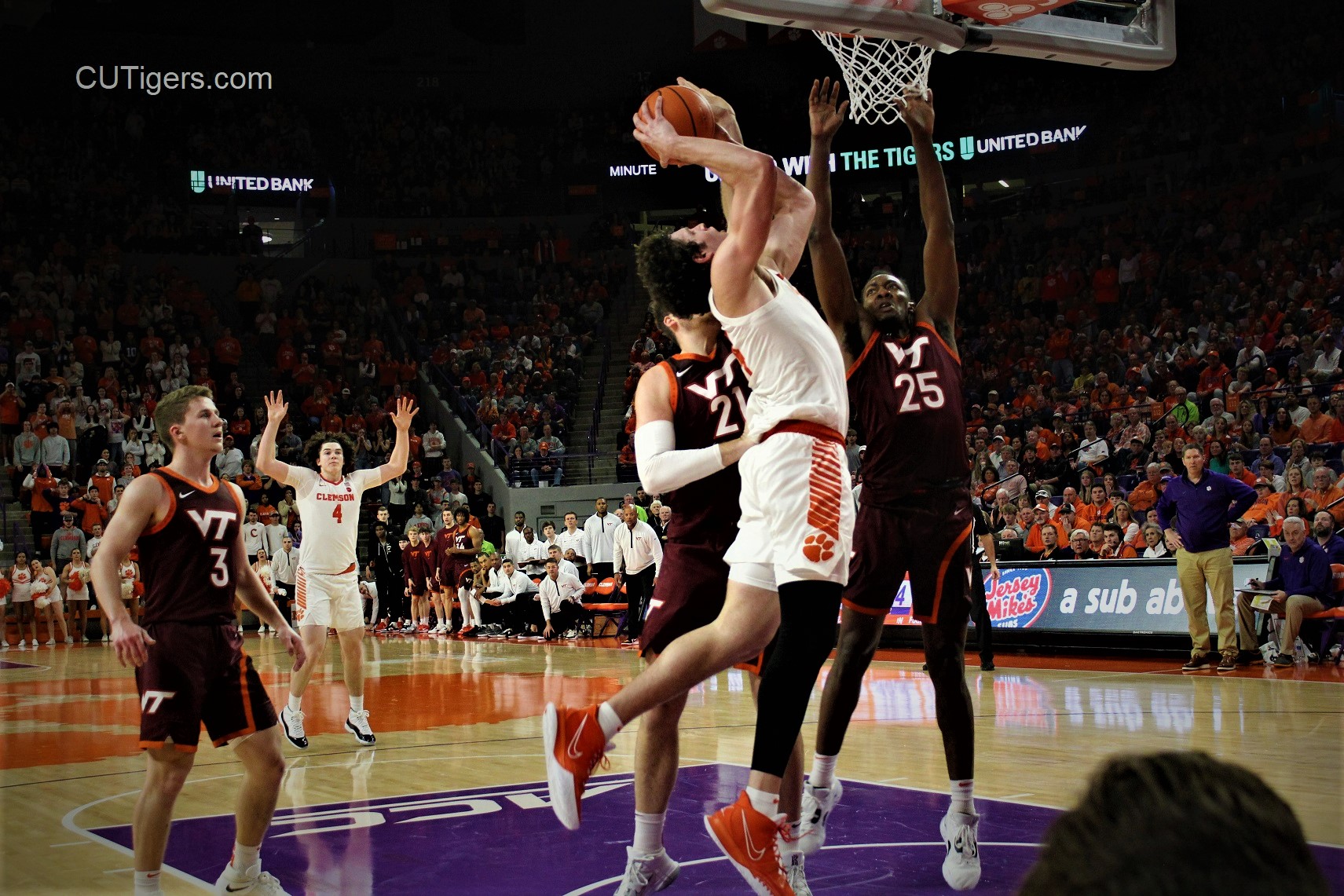 With Chase Hunter out of the lineup for the second straight game, redshirt freshman Josh Beadle made his second start at point guard, and the Tigers were never able to get into any kind of offensive rhythm. It was a defensive struggle throughout, and the Tigers had 17 turnovers while struggling from the arc, as mentioned. They managed to beat Duke last week despite shooting just 3-17 from the arc, and they were just 3-18 tonight, but Tyson made the big one at the end. Hall was sensational once again, scoring 20 points to give him 68 points in the last 3 games. True freshman Dillon Hunter provided a huge spark for the Tigers in the 2nd half with big brother Chase on the bench. Dillon played a career-high 23 minutes and made some big plays down the stretch, including a layup with 2:20 left to get the Tigers within one. 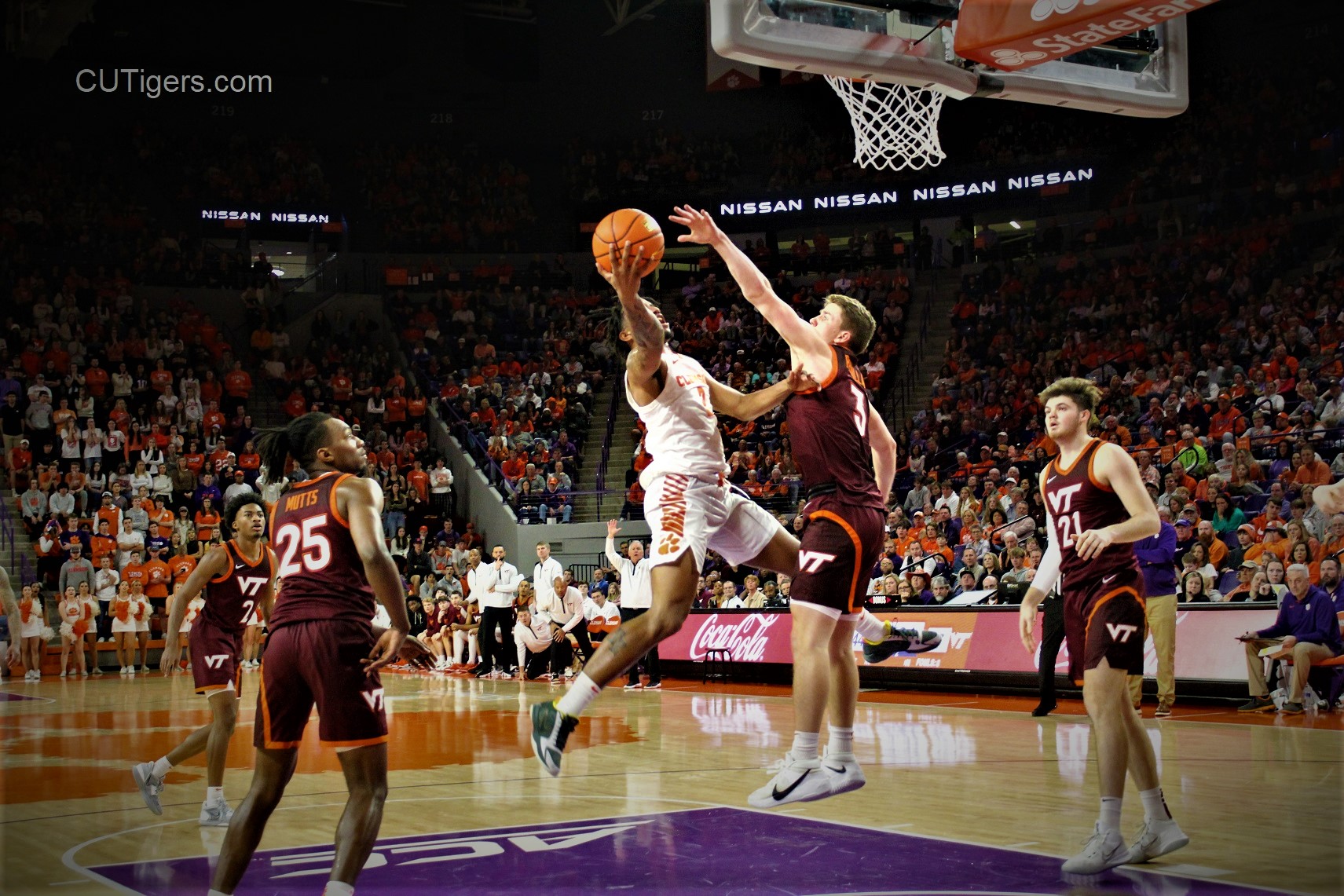 The Tigers led most of the first half but went on an 8-minute drought without a field goal, giving the Hokies a 15-4 run to end the second half and a 5-point lead at the break. The Tigers lead the ACC in free-throw shooting, and that has been a big part of their success. That continued to be the case tonight, as they went 12-15 at the line and needed every one of them.
The Tigers have won 14 straight home games! Don't let the Hokies' record fool you. They were 11-1 before Hunter Cattoor was injured, and they had him back in the lineup tonight, so this was an impressive win, especially without two starters including point guard Chase Hunter. He was wearing a walking boot, incidentally, and Brownell didn't sound too optimistic about his prognosis after the game, saying he was day-to-day. I expect him to miss at least a couple more games, which will make them much tougher to win than they otherwise would be. The Tigers probably would have started 13-0 in the ACC if not for Hunter's injury, but now they will have to fight to hold onto 1st place atop the standings. They have a huge home game against No.17 Miami 2 weeks from today, so hopefully he will be back in the lineup for that one! In the meantime, they host Georgia Tech on Tuesday night.
Post-game interviews and highlights are below! 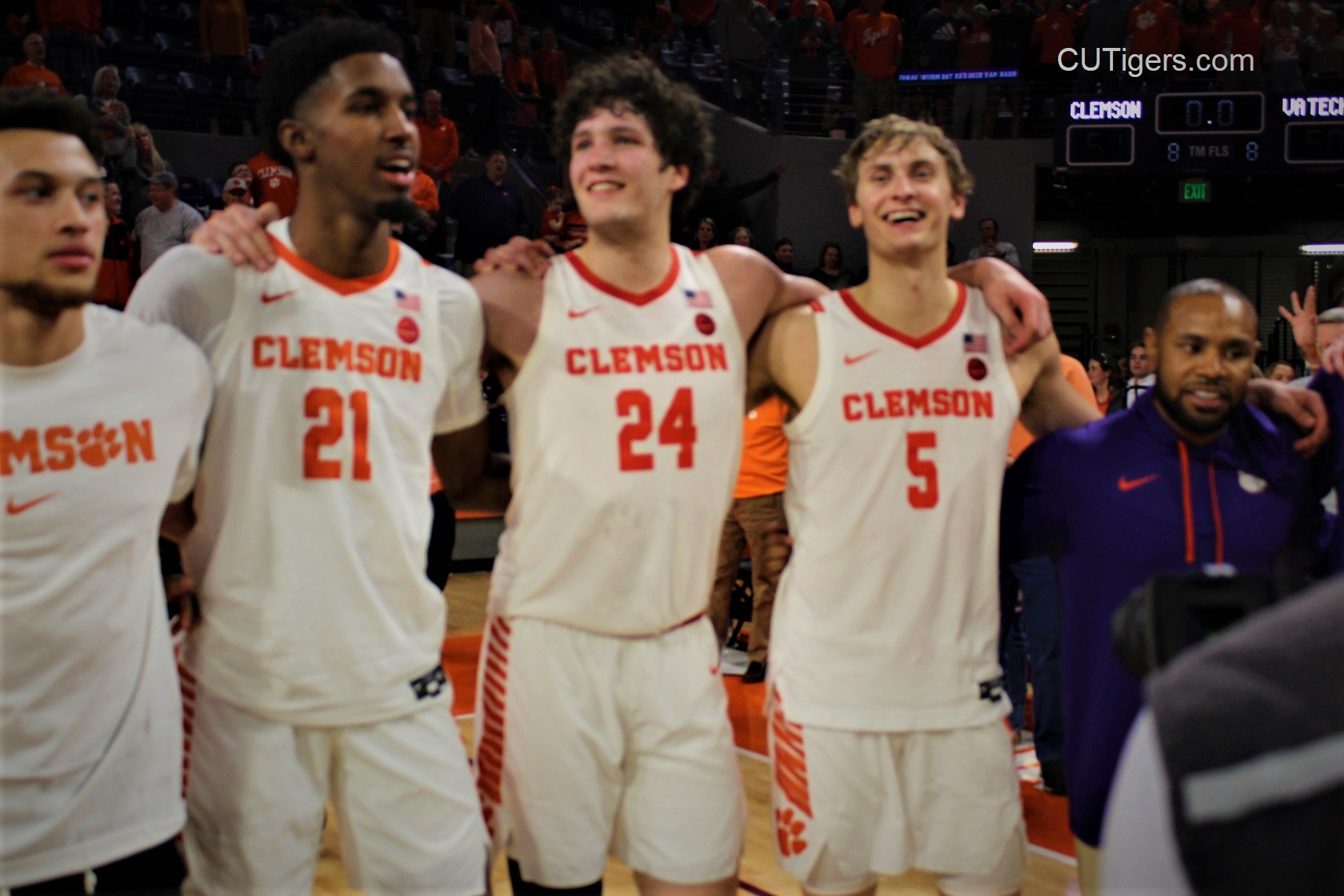