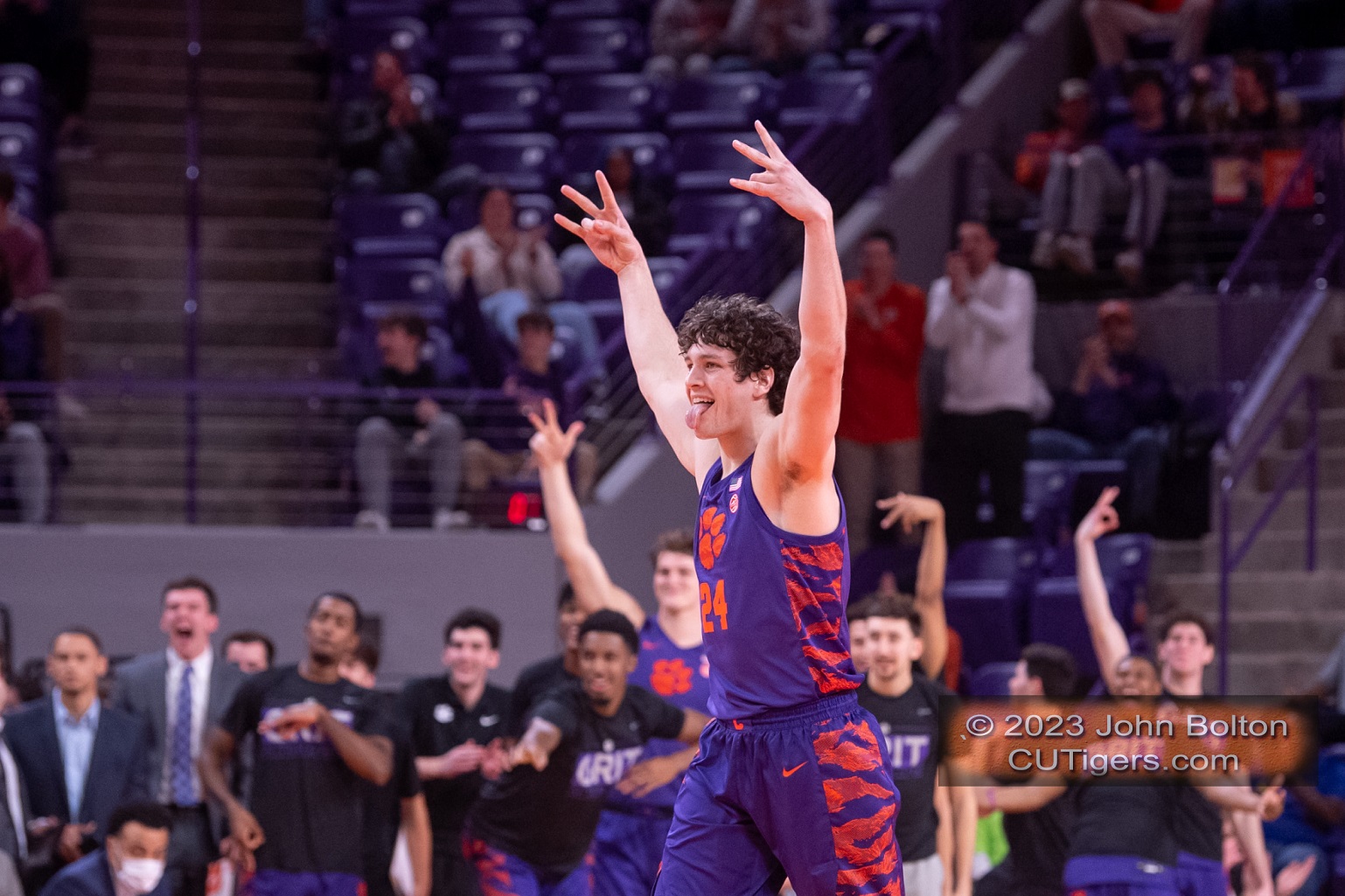 Photo by John Bolton
CLEMSON, SC - After losing starting point guard Chase Hunter to a foot injury and splitting their games with Wake and VA Tech last week, the Tigers dropped 5 spots from No.19 to No.24 in the AP Poll. Probably because most of the voters are completely oblivious that the Tigers were minus two starters in those games. Regardless of the silly AP Poll and NET rankings, which make zero sense, the Tigers entered the week 8-1 in the ACC and alone in 1st place at the midpoint of the ACC schedule. 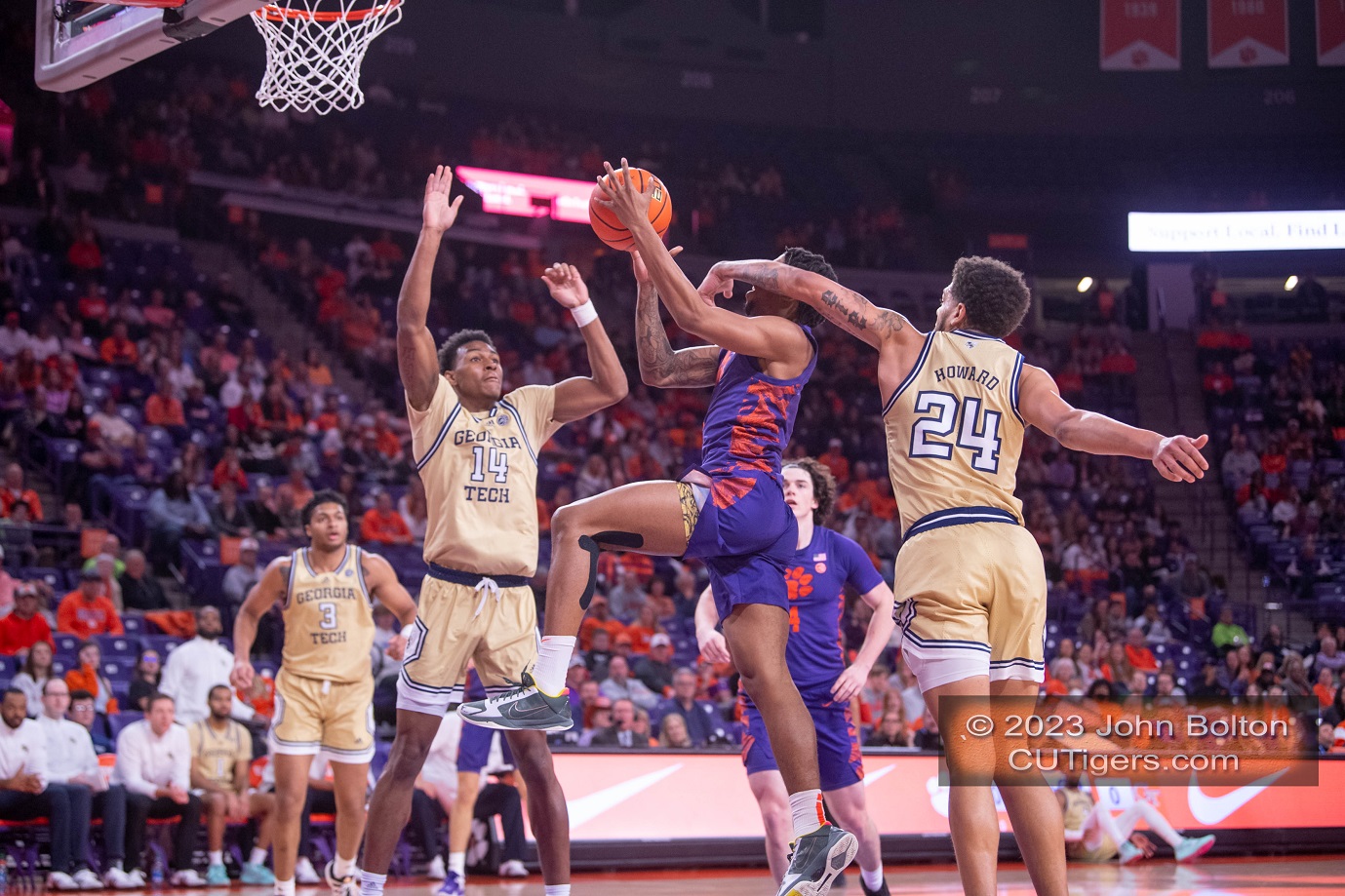 Chase Hunter missed his third straight game, and his freshman brother, Dillon, made his first career start after a great 2nd half against the Hokies on Saturday. It was yet another late 9:00 week night tip for the Tigers, who have already had more than their share this season, but the crowd was still relatively good considering the terrible tip time. The Tigers wore their Regalia uniforms for the first time ever at home, Brevin Galloway told me after the game that he was extra excited to see the purple uniforms in the locker room before the game, and he showed it on the court from the opening tip! After Tyson made a 3-pointer on the opening possession, Galloway made two in a row, including a 4-point play, and went on to score 12 points in the half, shooting 3-5 from the arc. It was a nice bounce back after a sub par game on Saturday for him. 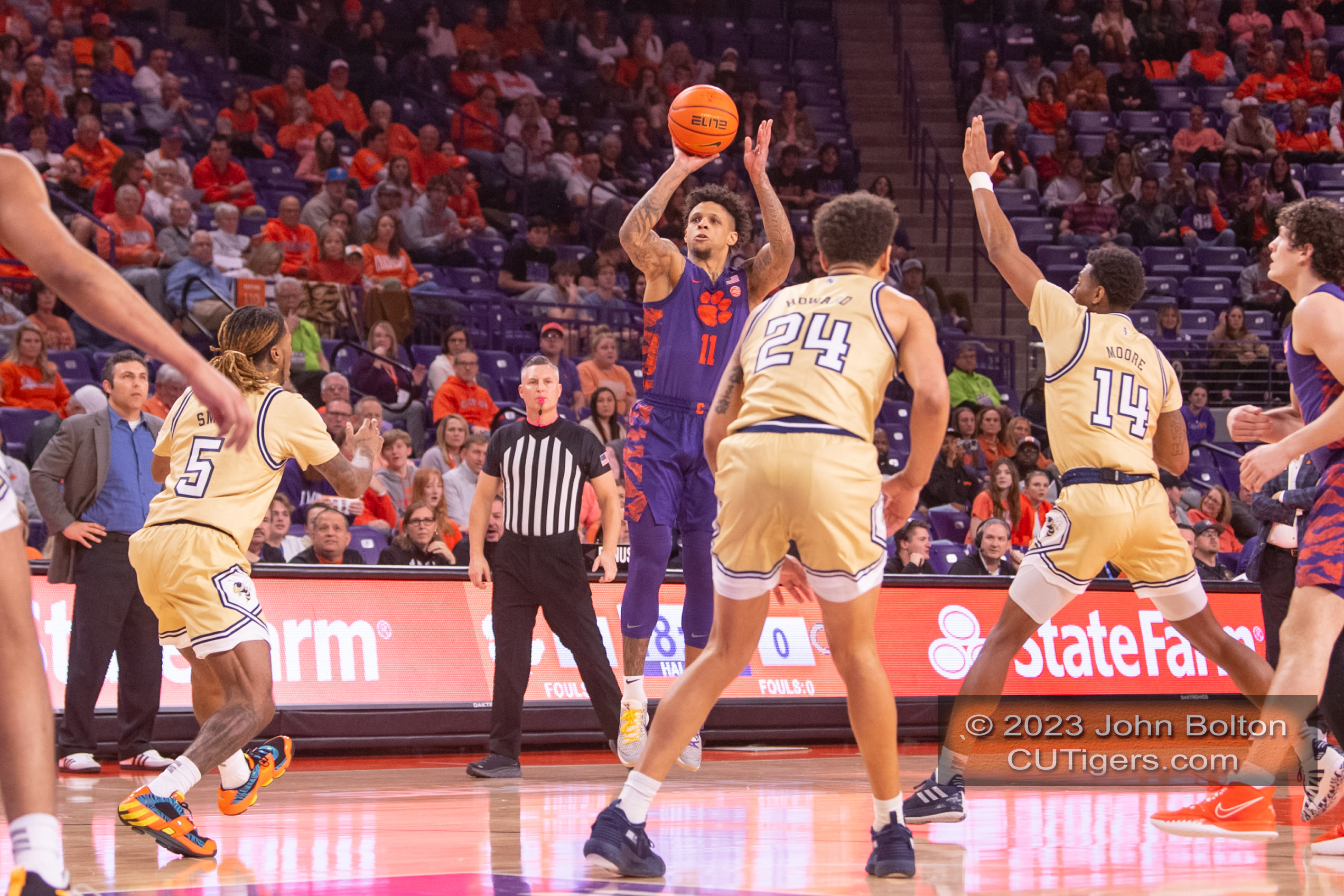 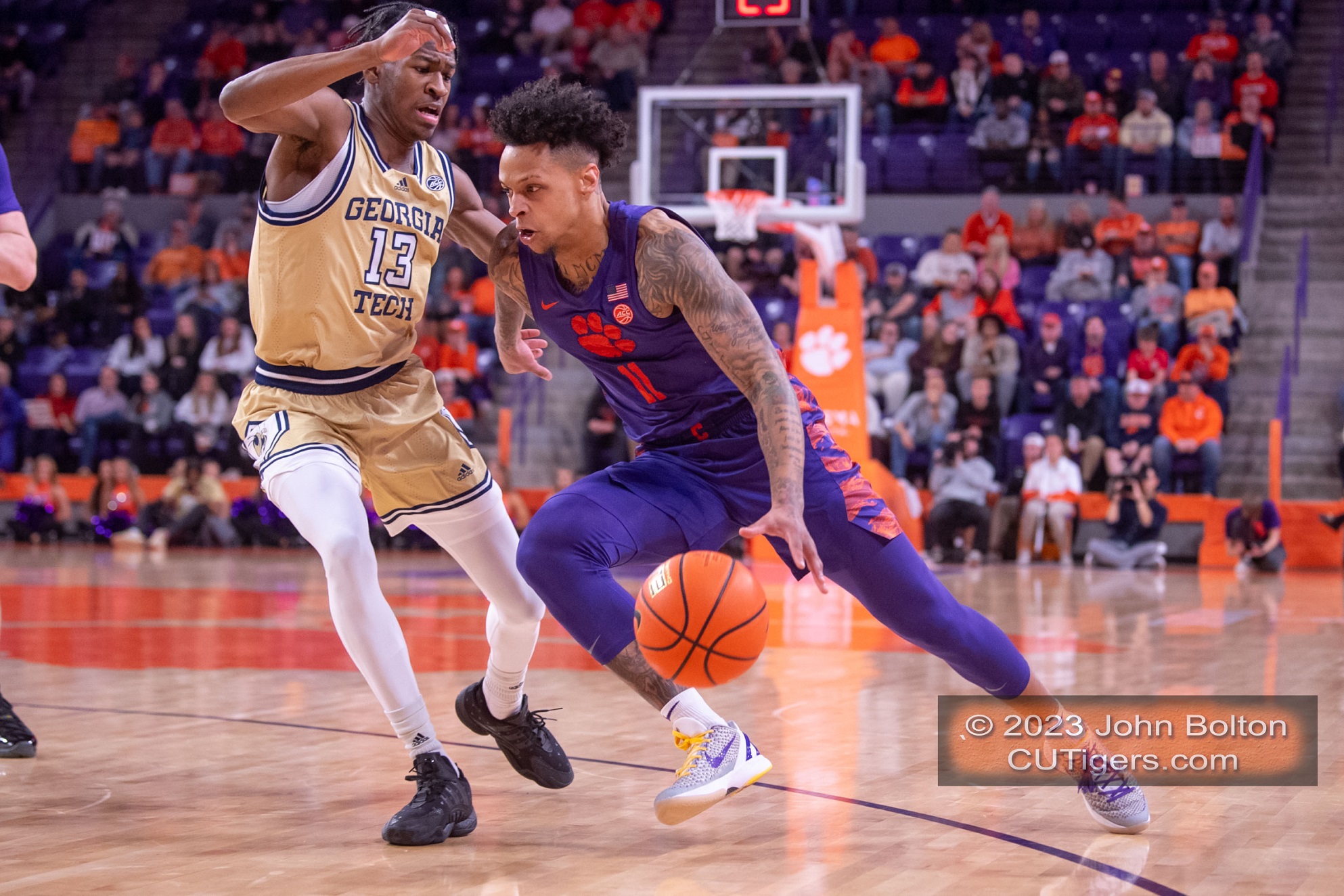 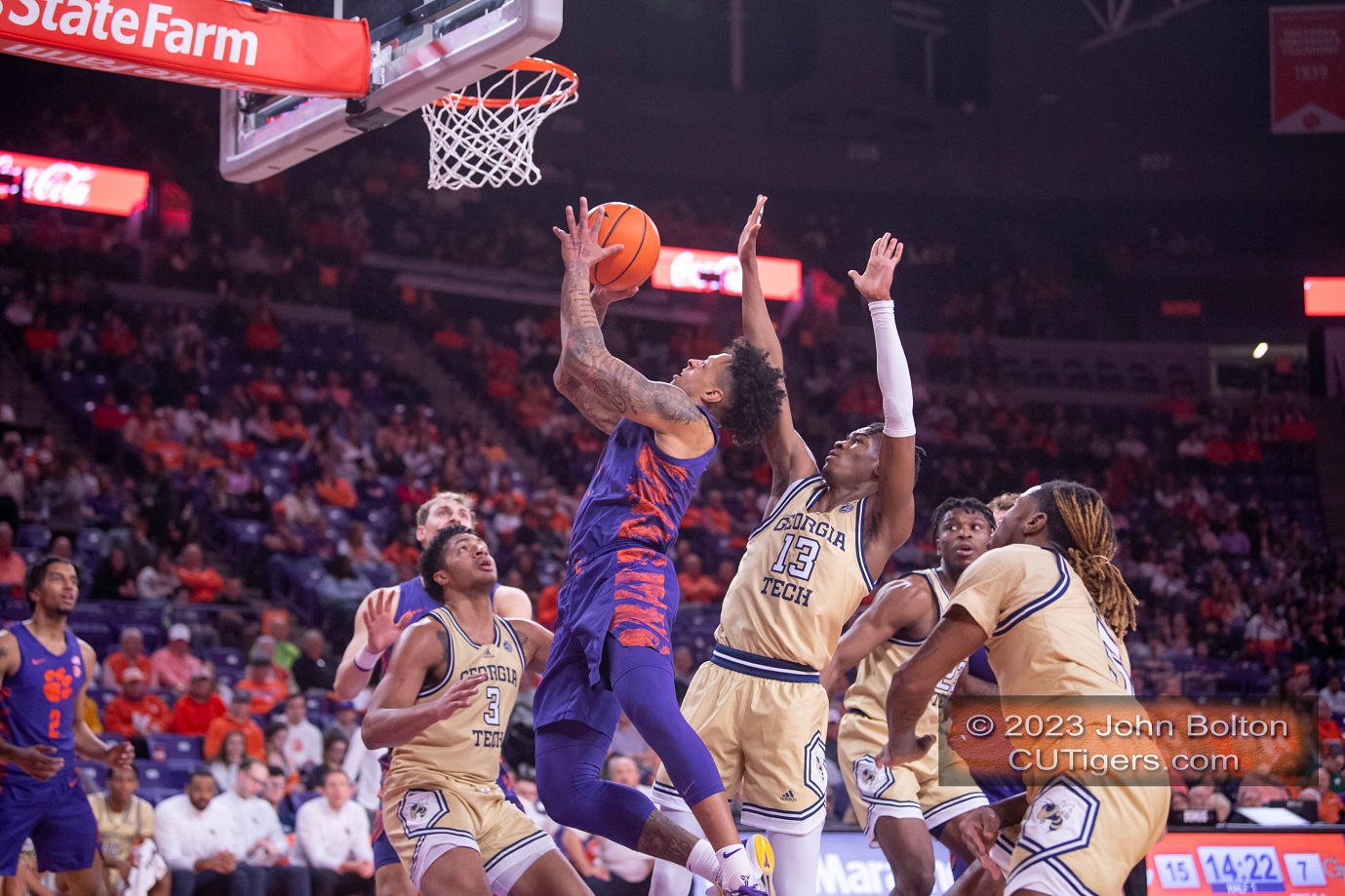 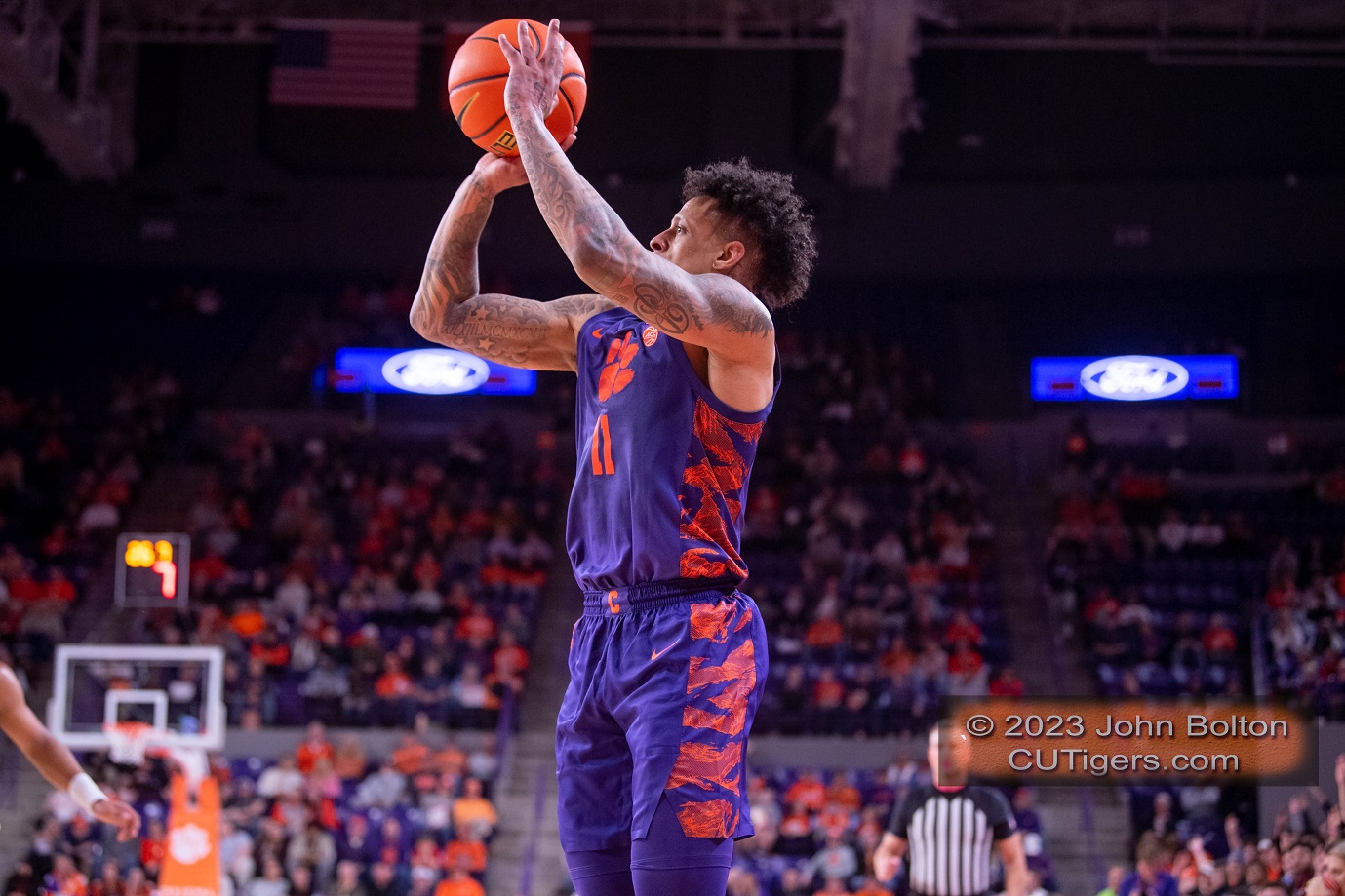 Freshman Chauncey Wiggins continued to show how much his confidence has grown, scoring 9 points off the bench in the first half. He made a big late bucket in the close road win at Pitt, and last week he broke out with his first three 3-pointers, including a 4-point play, for a career-high 10 points. He used that great length of his tonight and was 2-3 from the arc and 5-7 from the field to pass last week's career-high with 12 points. Fellow freshman Dillon Hunter also played well in his first start, playing 36 minutes with 9 points and his first career 3-pointer. At one point, he scored 7 straight points for the Tigers. RJ Godfrey also continued to provide productive minutes off the bench as well. At one point in the 2nd half, I looked up and saw the freshman trio of Hunter, Wiggins and Godfrey on the floor at the same time with Galloway. That's 4 players that weren't here last season, including 3 true freshman! I doubt Brownell would have imagined before the season that he would have that lineup on the court in the 2nd half against Tech. 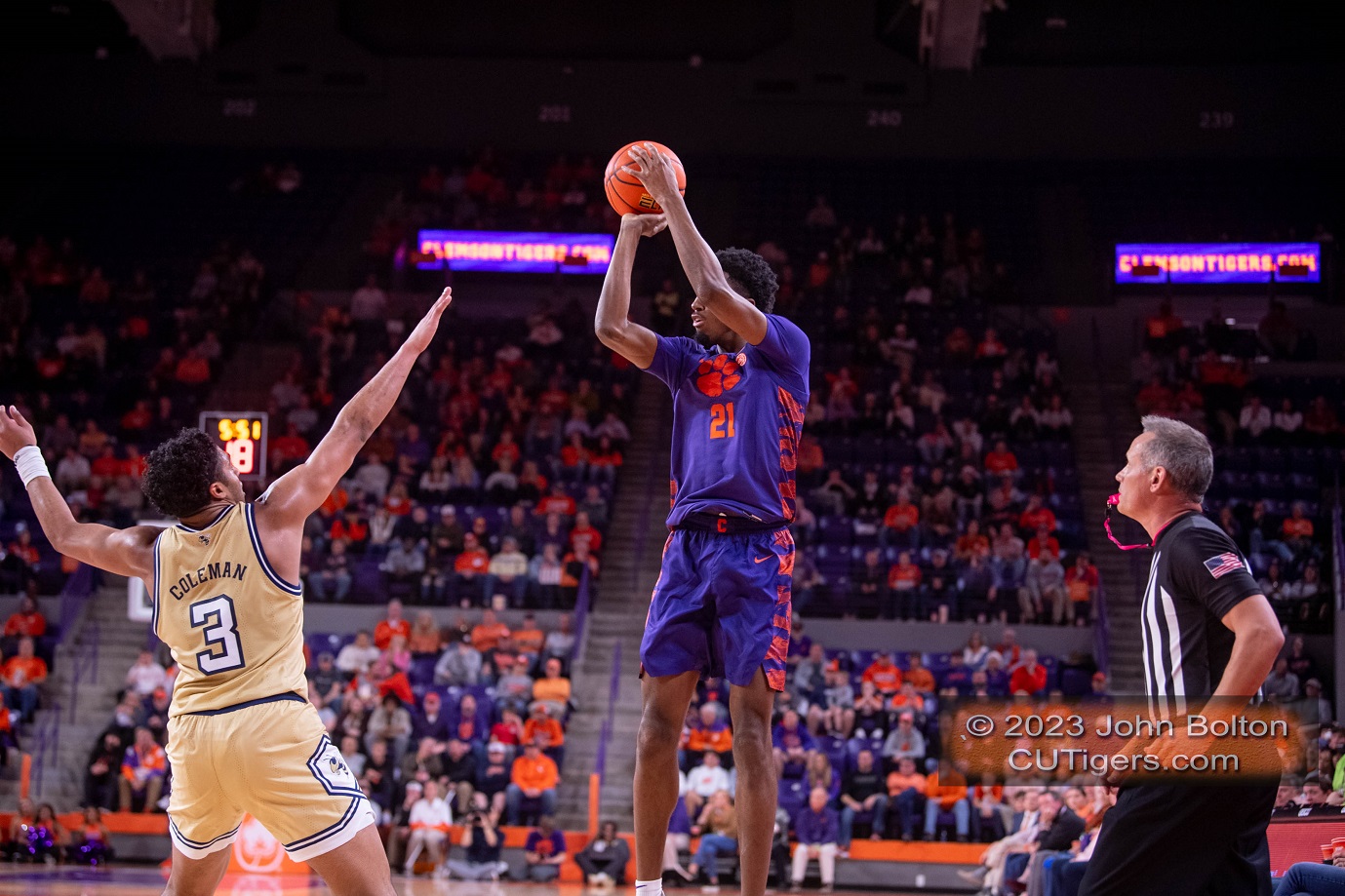 Mr. Steady PJ Hall was outstanding, as usual, making big buckets, 3-pointers and 3-point plays just when the team needed them. He finished with a team-high 17 points and 7 rebounds. Tyson was quiet most of the night with early foul trouble but made some shots down the stretch and finished with 12 points and 8 rebounds. He was 2-5 from the arc. The one deficiency for the Tigers was rebounding. Tech had 10 offensive rebounds, but the Tigers neutralized them with excellent defense. Tech is a good rebounding team, too, at 5th in the ACC. The Tigers were 9-20 from the arc--which was nice to see after going 3-17 and 3-18 in their last two home games--and Tech was just 4-23. The Tigers continued their sublime free throw shooting in league play, going for 9-11. They lead the ACC in free throw percentage. Knock on wood! 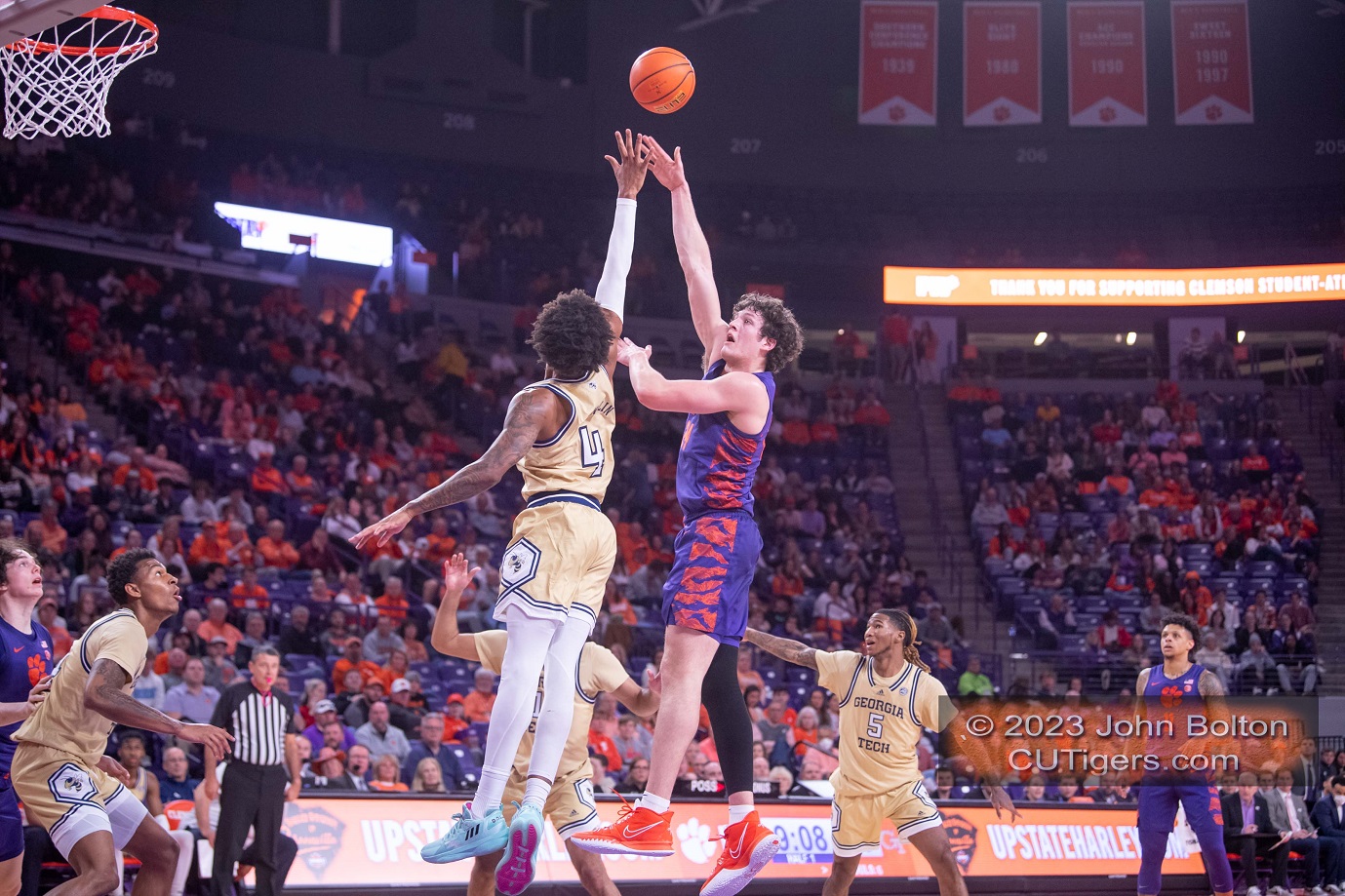 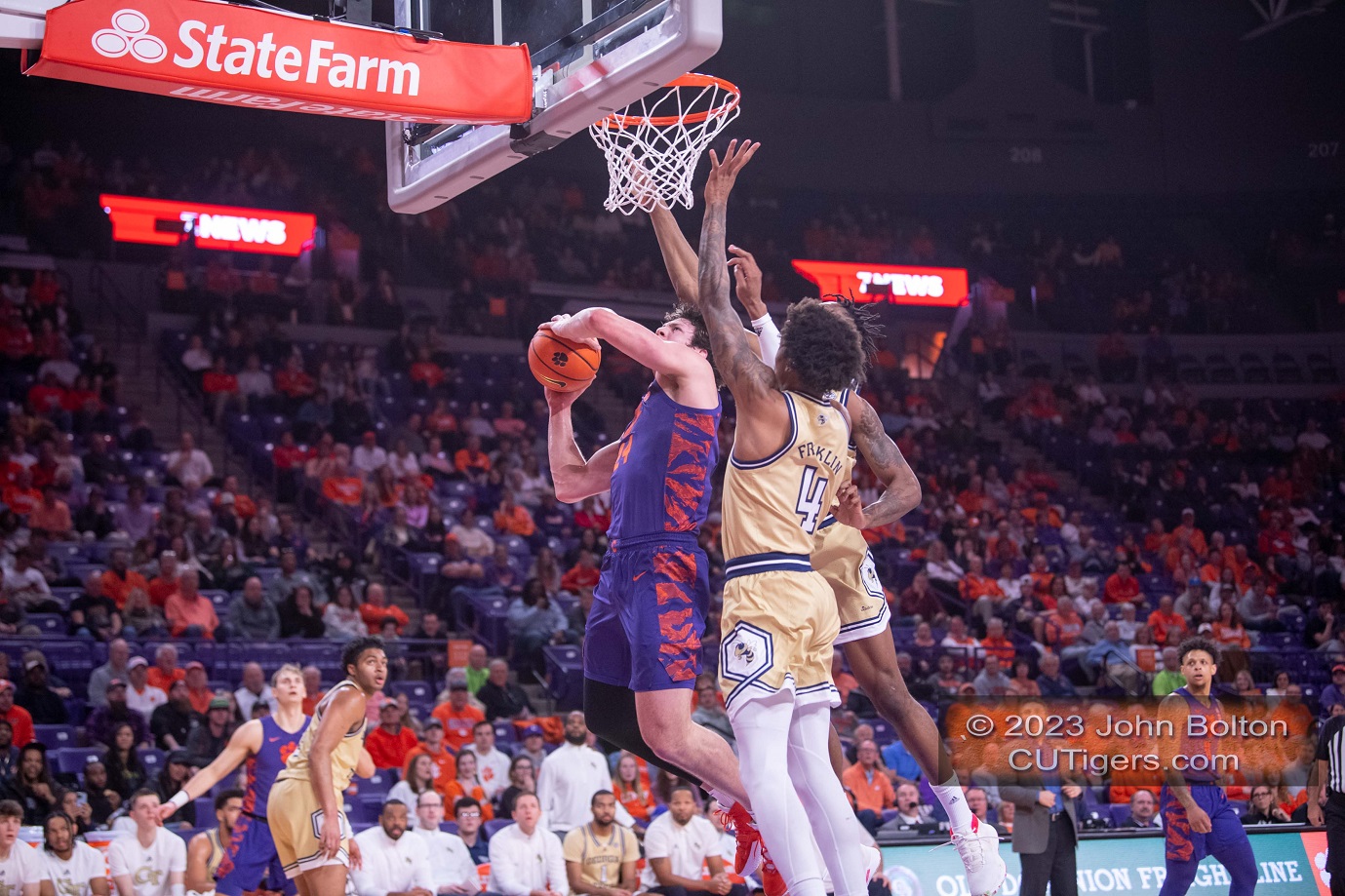 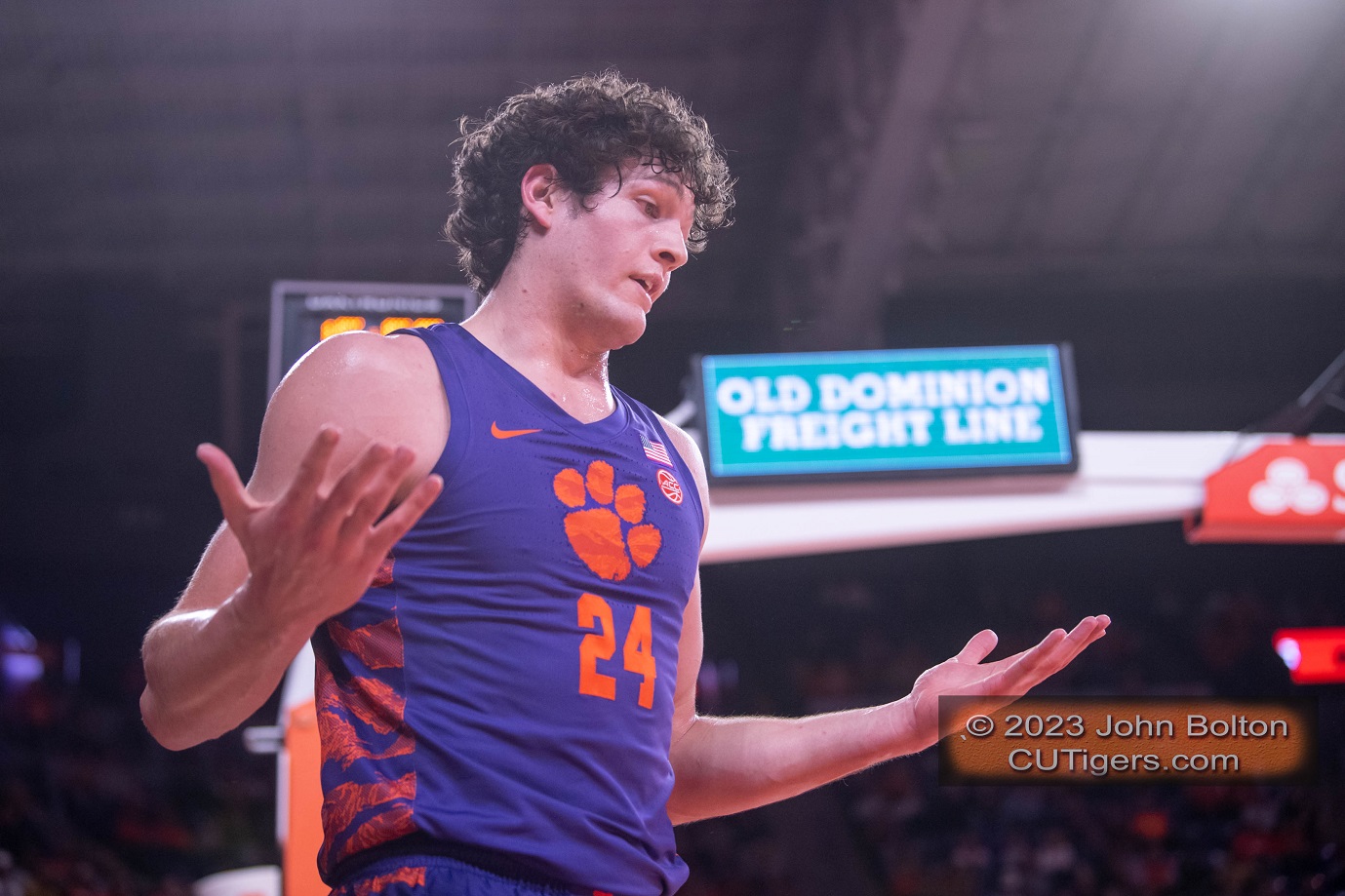 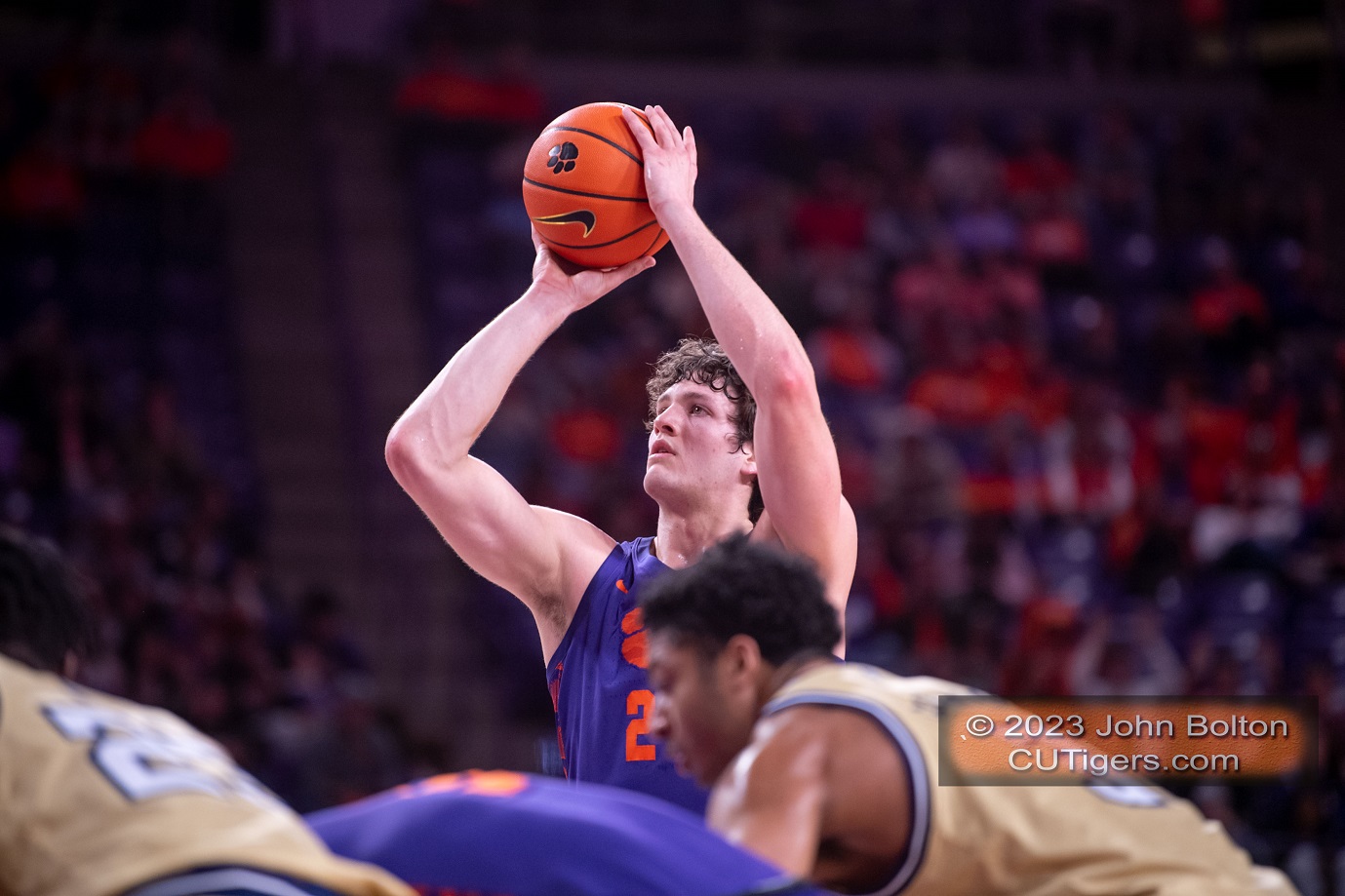 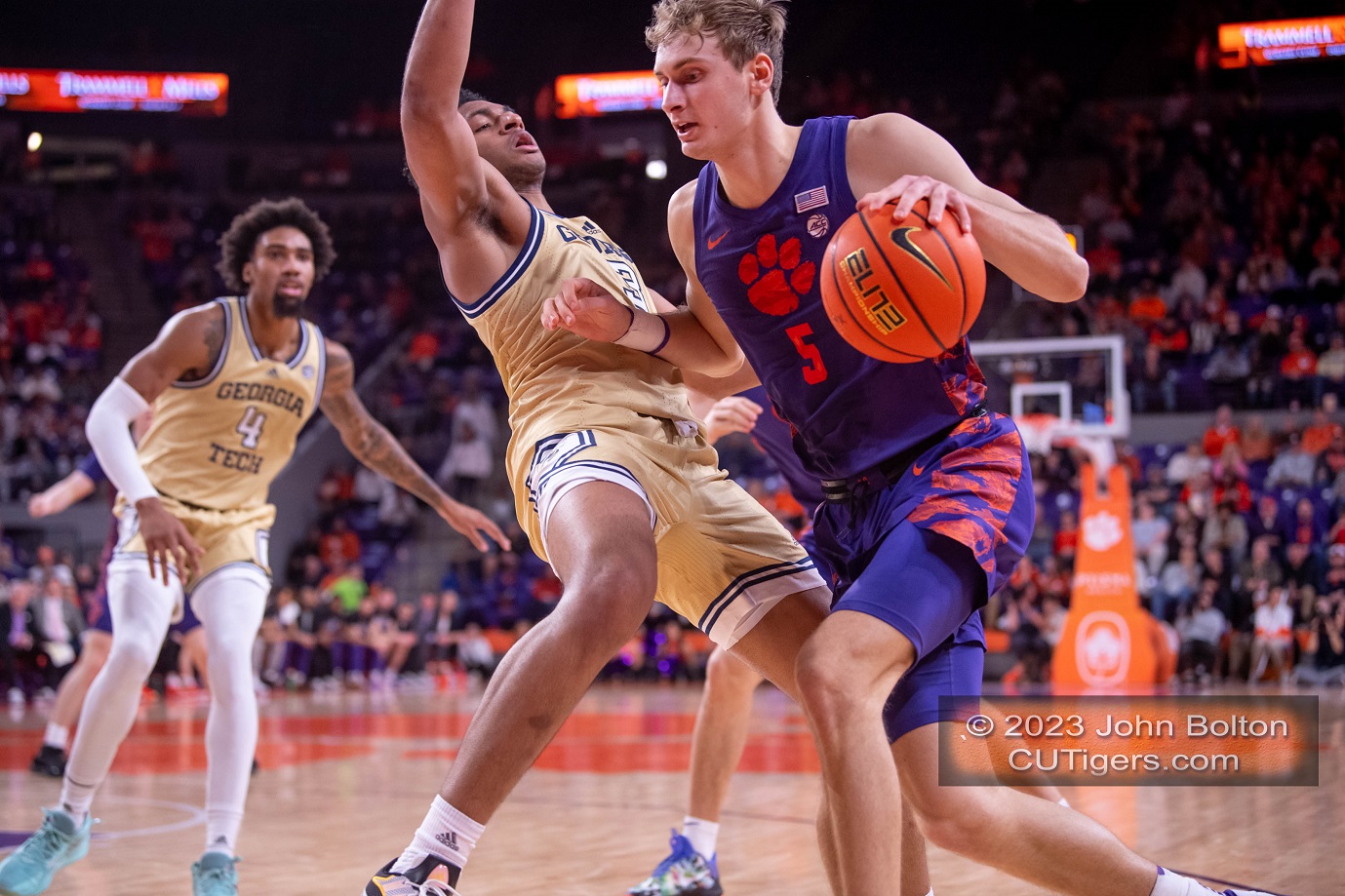 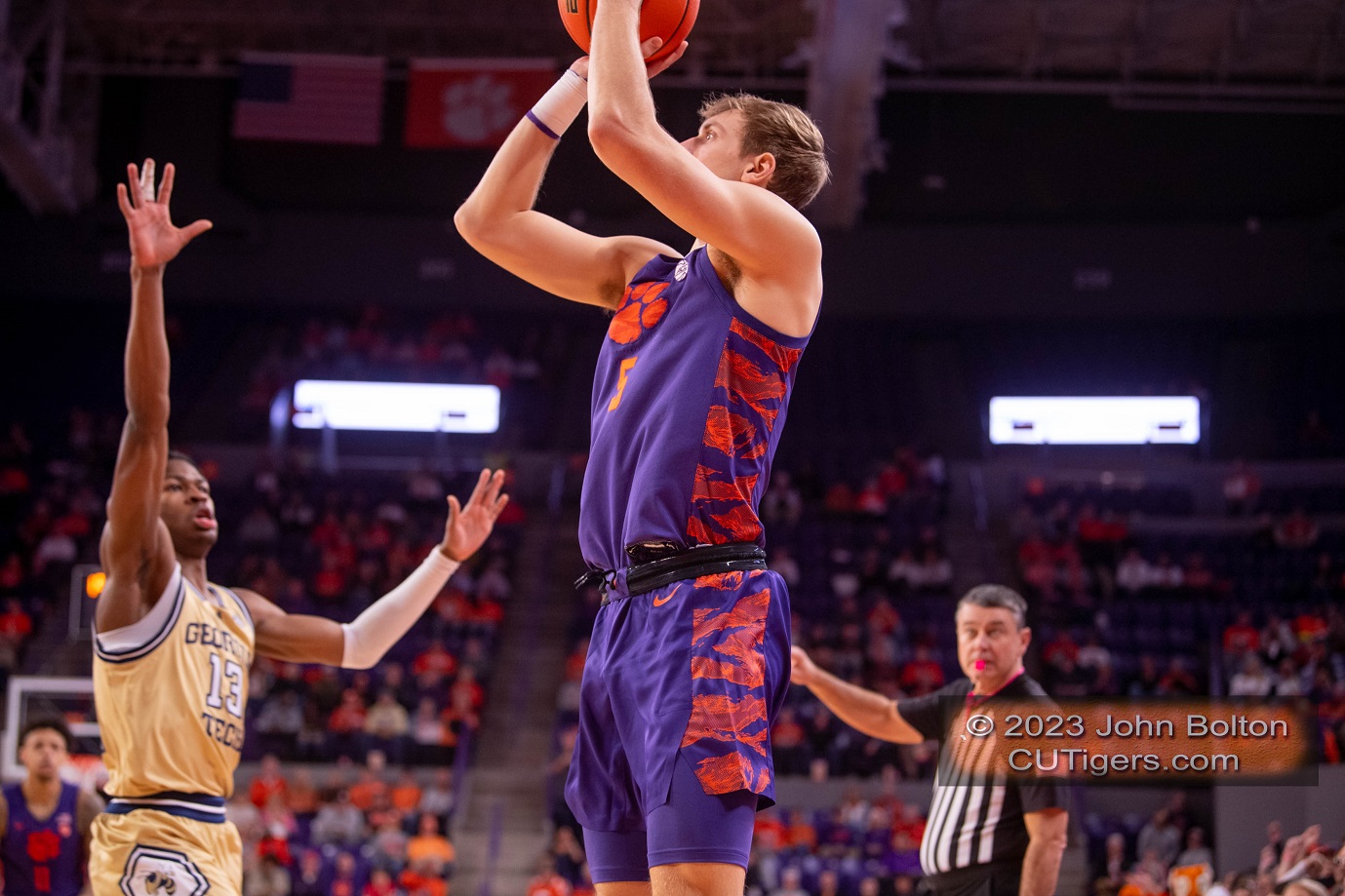 Brownell called it a "workmanlike" win after the game, and it felt like just that. I could not be more impressed with this team, though. For them to have all the hype of a historic season, sitting in 1st place atop the ACC with a ranking for the first time in 2 years, suffer the loss of two starters and still go out in a 9:00 game and run Tech off the court? That is really something, folks. Say what you want about Tech's poor record, it is still impressive to be down two starters, give a true freshman his first start at point guard and sill go out and dominate the way they did, never trailing in the game. And by the way, Tyson was in foul trouble and didn't even have one of his better games! I can't say enough how impressed I am with the way the bench has performed to this point. Schieffelin, Middlebrooks, Godfrey, Wiggins, Hunter and Beadle have all been outstanding and play within their roles. With that much youth and inexperience, you'd think they might get caught up in the hype or have the moment too big for them, but they haven't. Brownell has done a great job keeping them grounded, and the veterans have been a calming presence. 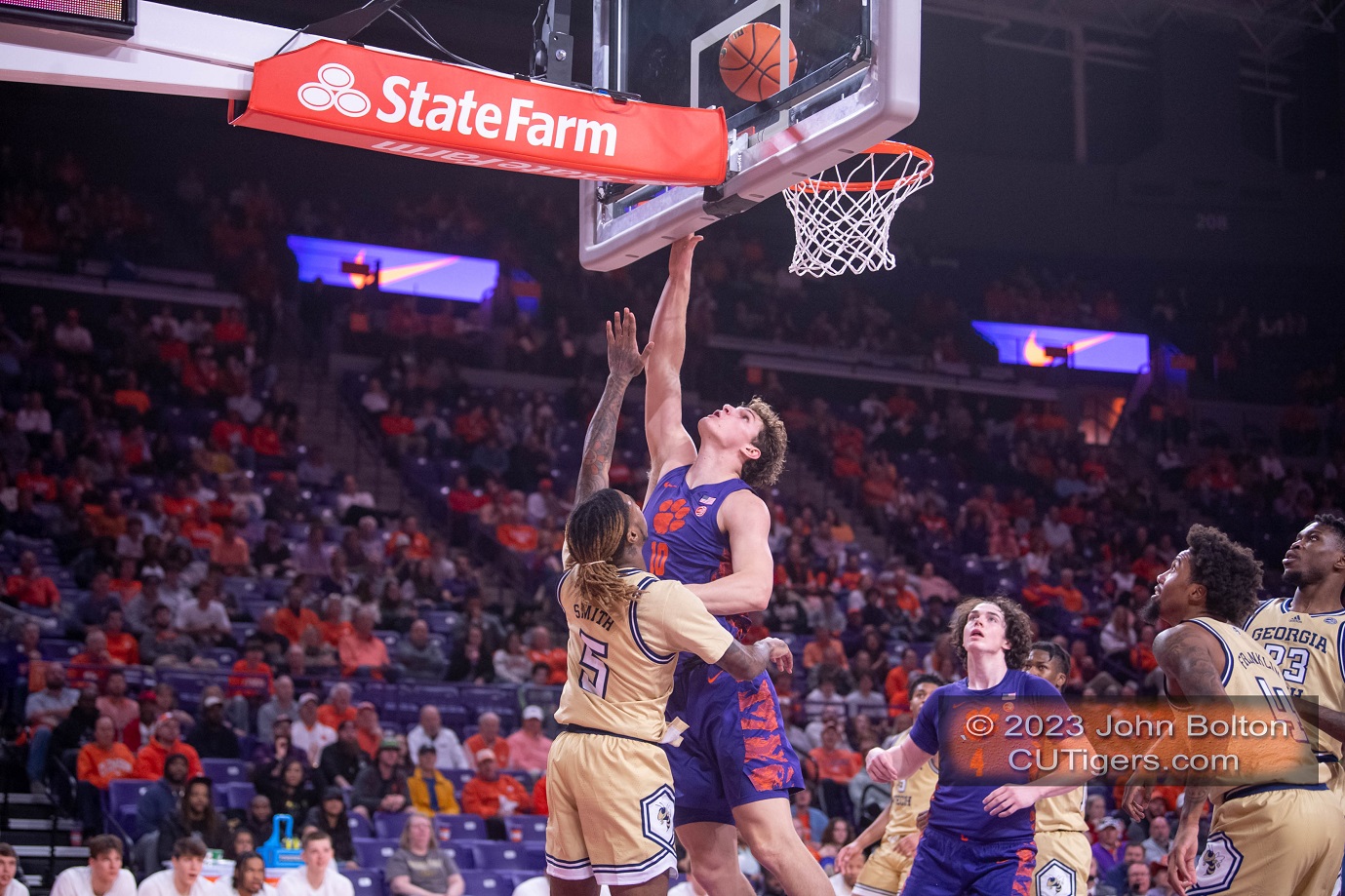 The Tigers have won 15 straight at home and are now 17-4 overall, 9-1 in the ACC. They are 8-1 since losing Hemenway and 2-1 with both Hunter and Hemenway out. Both players have begun doing light drills and will hopefully be back for a huge showdown with No.17 Miami on Saturday the 4th in Littlejohn. Assuming Hunter does not play in Tallahassee on Saturday, I will be very pleasantly surprised if the Tigers beat FSU. The Noles had a dreadful start to the season, in part due to injuries, but they have played better since beginning ACC play with a 5-5 record. Furthermore, they did not show up at all against rival Miami tonight and were blown out from start to finish. That tells me they will play out of their minds against the Tigers on Saturday. It happens every time in college basketball. A team gets its doors blown off and then looks like a world beater in the following game at home. Also, it's been a long time since the Tigers have won in Tally. I hope I'm wrong, but I see another loss coming. After that, however, the Tigers should win at Boston College before the big one against the Canes.
Post-game interviews and highlights are below!
MORE CLEMSON BASKETBALL AND FOOTBALL COVERAGE HERE