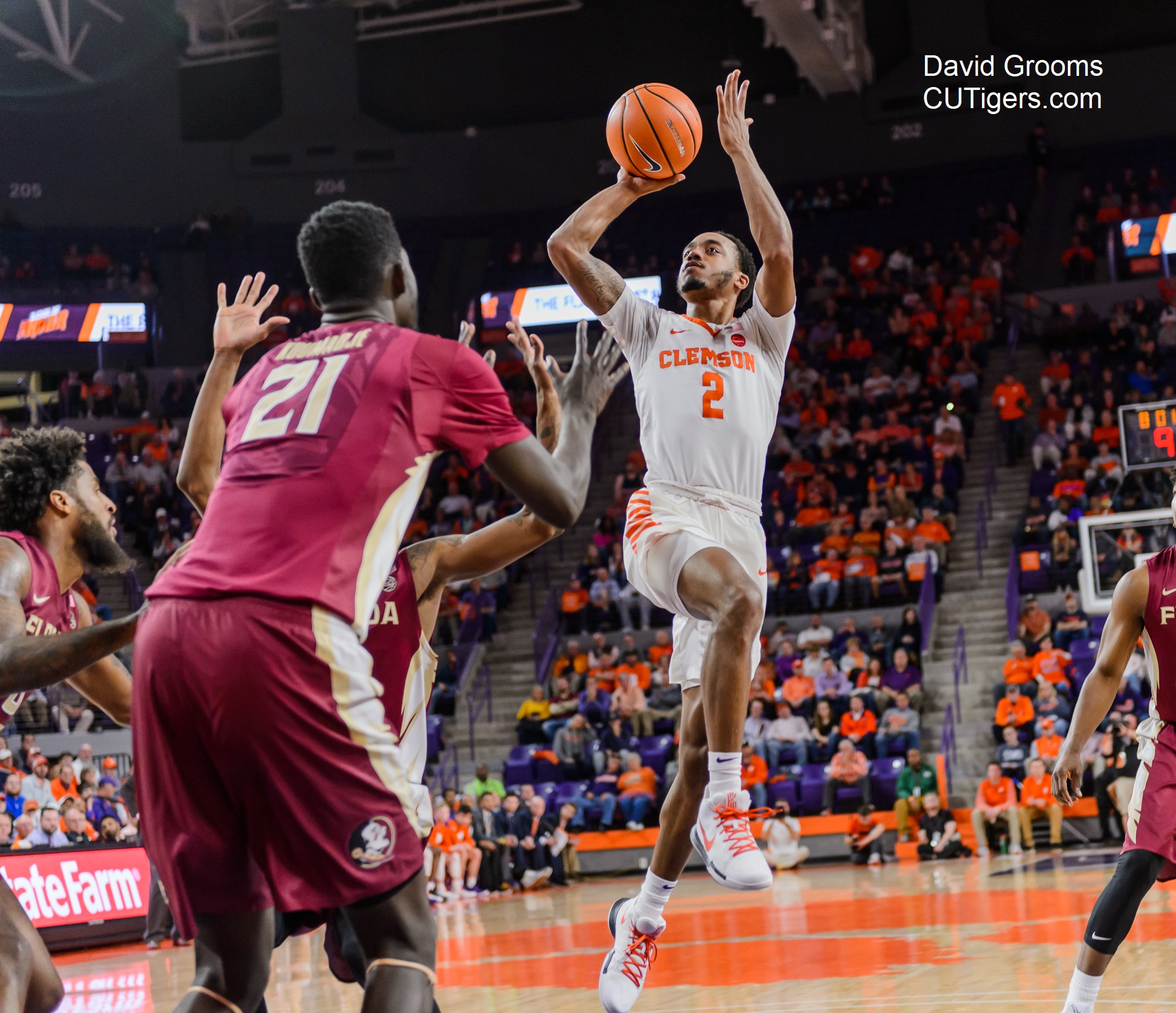 Photo by Trevor Groves CUTigers.com
HIGHLIGHTS:
BOX SCORE
CLEMSON, S.C. — Clemson University men’s basketball made history with its 76-63 win over Florida State on Wednesday night. Clemson won its program record 11th game in ACC play and also tied a program record with its 15th home victory of the 2017-18 campaign.
Marcquise Reed turned in his 10th 20-point outing of the season with a 22-point effort on 7-of-11 shooting from the floor. He also finished 7-for-9 at the charity stripe. Three other Tigers scored in double-figures: Gabe DeVoe (13), while Shelton Mitchell and Elijah Thomas each poured in 11 points each. Thomas grabbed a team-high eight rebounds.
The Tigers (22-7, 11-6 ACC) found themselves down 24-16 with 5:51 left in the opening stanza, but were able to orchestrate a 16-5 run to take a 32-29 lead with a 1:19 to play. After a Phil Cofer 3-pointer tied the game at 32-32, Shelton Mitchell drilled a bomb with two seconds left on the clock to give Clemson a 35-32 lead heading into the locker room.
In the second half, another run by the Tigers would give them the lead for good. Down 47-45 a Mark Donnal 3-pointer keyed a 7-0 run that was capped by a DeVoe layup to give Clemson a 52-47 advantage.  Clemson would never look back and end with its largest lead of the game – a 13-point victory.
Last time out against the Seminoles (19-10, 8-9 ACC), the Tigers committed 21 turnovers that turned into 29 Florida State points. Clemson committed just nine on Wednesday.
Clemson returns to action on Saturday when it finishes off the regular at Syracuse. Tip time is set for 2 p.m.
Notes: Clemson earned its 22nd victory of the season, the most since 2013-14 (23) … the 11th ACC victory set a new program record for ACC wins during a regular season … the Tigers improved to 15-1 – tying a program record for the most home wins during a regular season … Marcquise Reed tallied his 10th 20-point outing of the year.