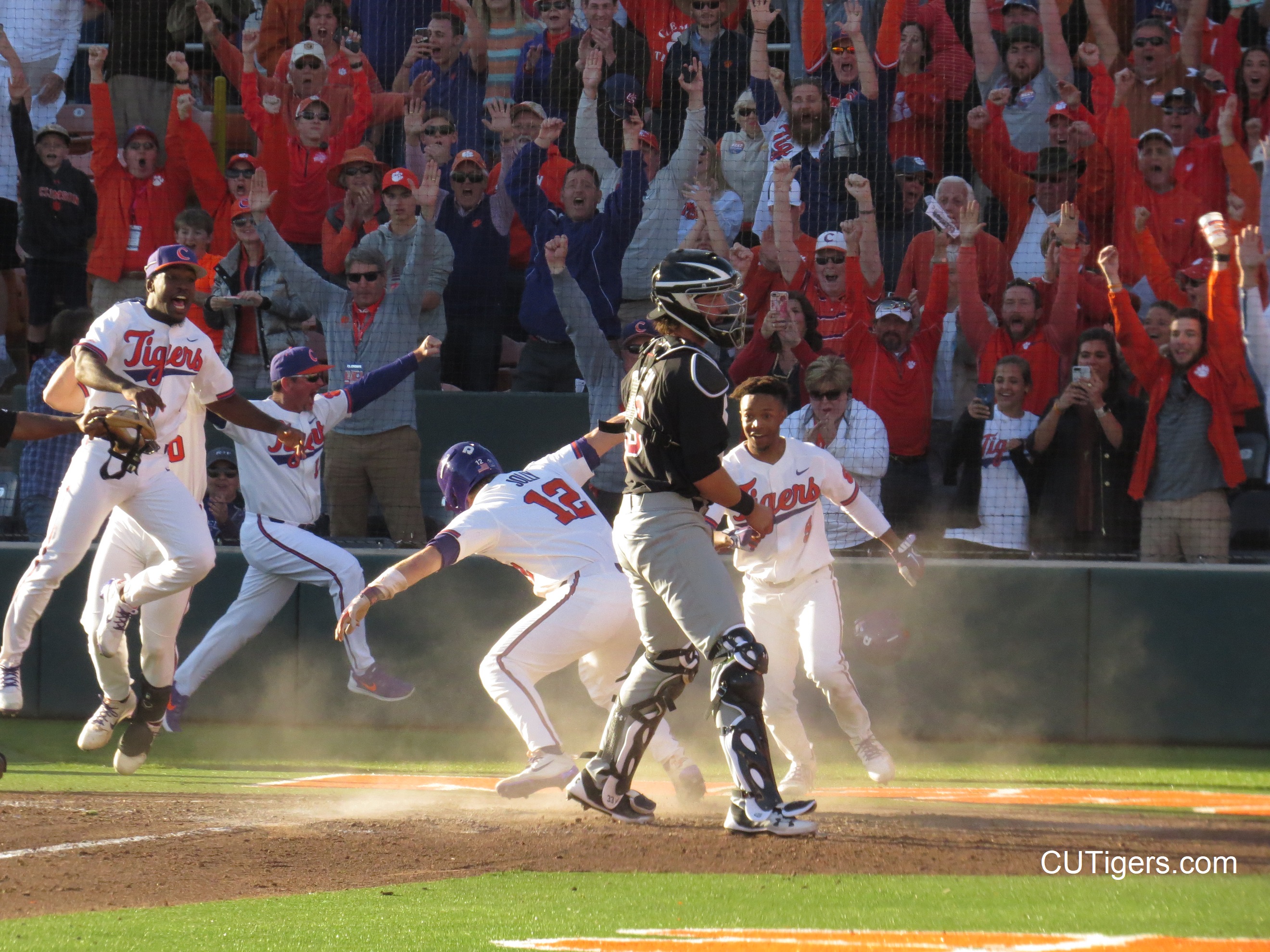 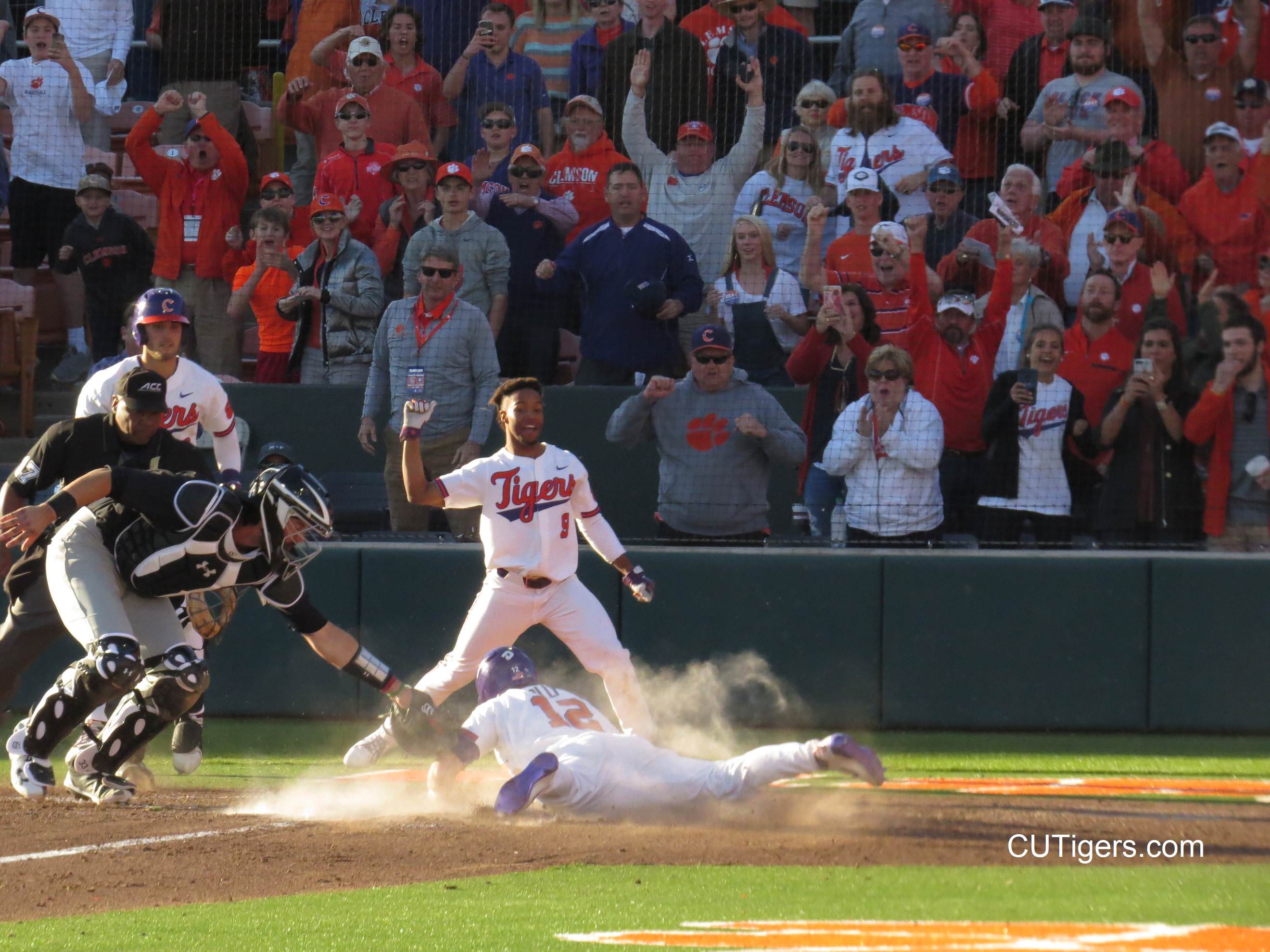 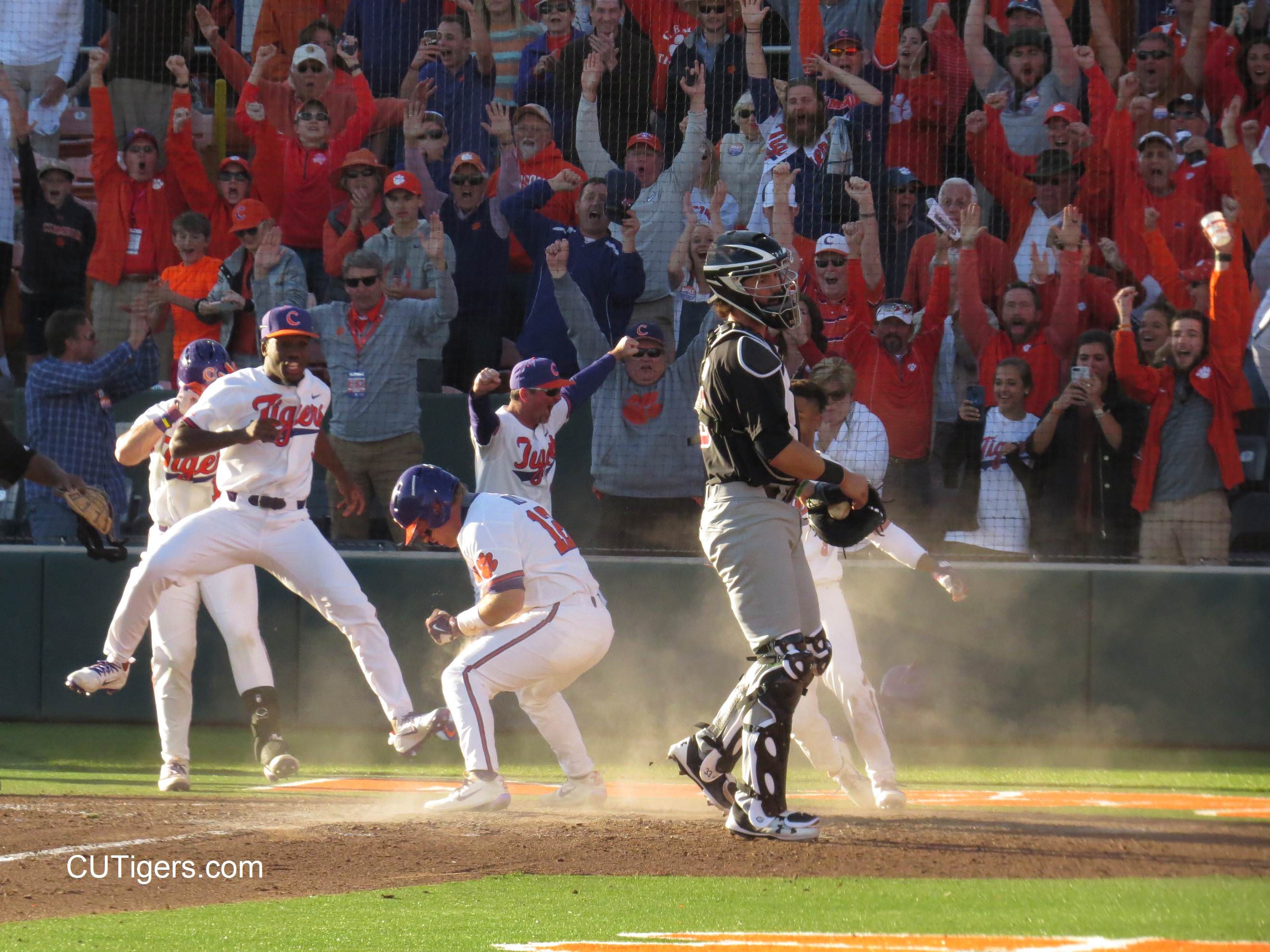 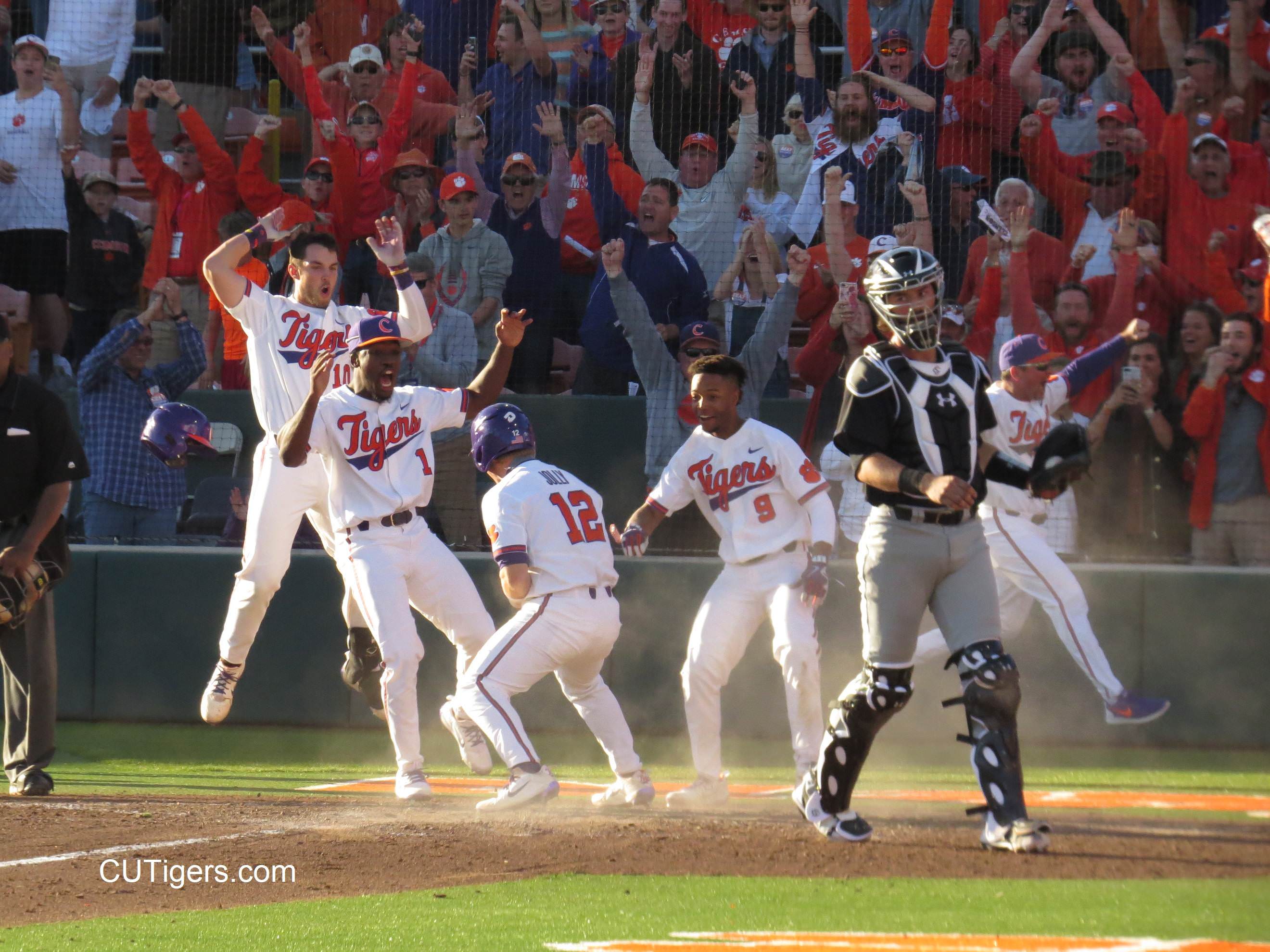 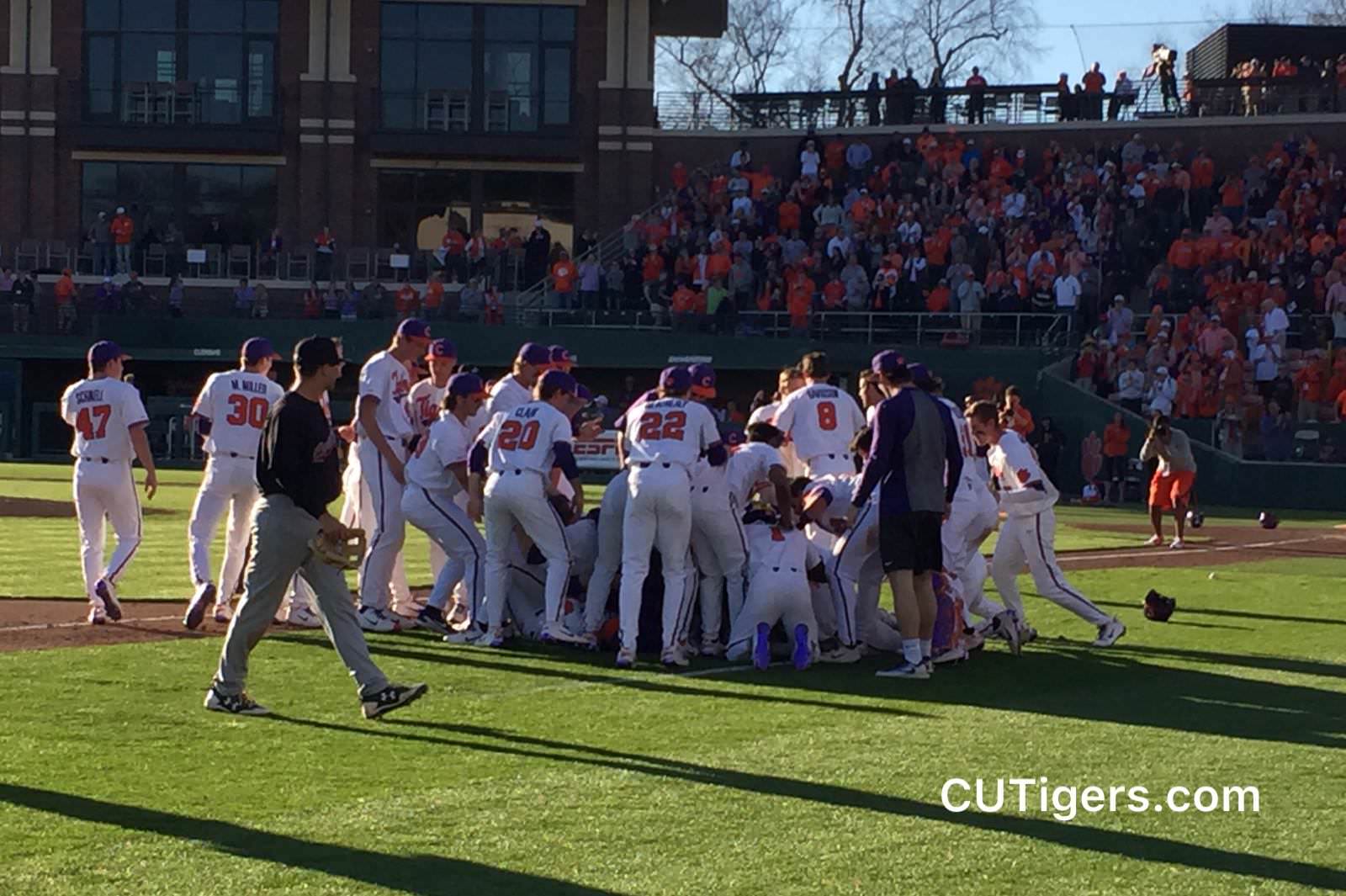 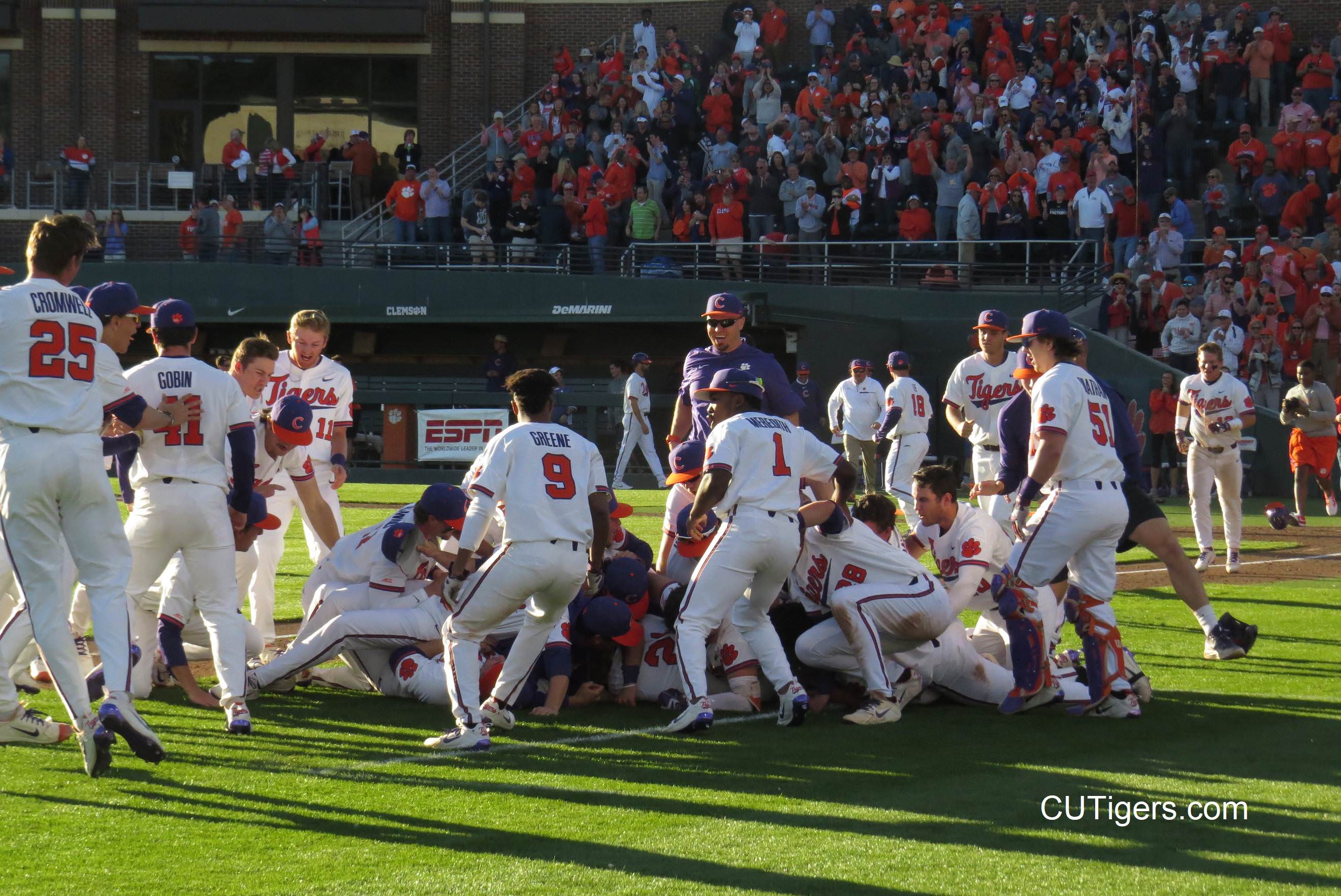 BOX SCORE
CLEMSON, S.C. - Drew Wharton hit a one-out triple that scored Robert Jolly in the ninth inning to lift No. 7 Clemson to an 8-7 walkoff victory over No. 23 South Carolina at Doug Kingsmore Stadium on Sunday afternoon. The Tigers, who won the series 2-1, improved to 10-1, while the Gamecocks dropped to 7-5. It marked the fourth series win in a row for Clemson over South Carolina.
Patrick Cromwell gave Clemson a 1-0 lead in the first inning with his second homer of the year, then the Tigers scored two runs in the third inning, highlighted by Chris Williams' run-scoring single. In the fourth inning, Logan Davidson hit a run-scoring double and Cromwell added a two-run single. TJ Hopkins cut Clemson's lead in half in the fifth inning with a three-run homer, then South Carolina scored a run in the top sixth inning. Davidson belted a solo homer, his first of the year, in the bottom of the sixth inning, then the Gamecocks manufactured another run in the eighth inning.
The Gamecocks took advantage of a costly Tiger error with no outs in the top of the ninth inning to score two unearned runs and tie the score 7-7. With one out in the bottom of the ninth inning, Jolly drew a walk, then Wharton belted a triple off the wall in right field. Jolly scored from first base to give Clemson its 10th win of the season.
Ryley Gilliam (2-1) did not allow an earned run in the final 1.2 innings pitched to earn the win, while Carman Mlodzinski (0-2) suffered the loss.
Davidson won the Bob Bradley Award as Clemson's series MVP. He was 3-for-6 with a homer, double, two RBIs, five runs, eight walks and two steals in three games. Righthander Adam Hill, who totaled 14 strikeouts on Friday, won the Tom Price Award as South Carolina's series MVP.
The Tigers host Wofford on Tuesday at 6:30 p.m., on ACC Network Extra. Tickets are only $2.