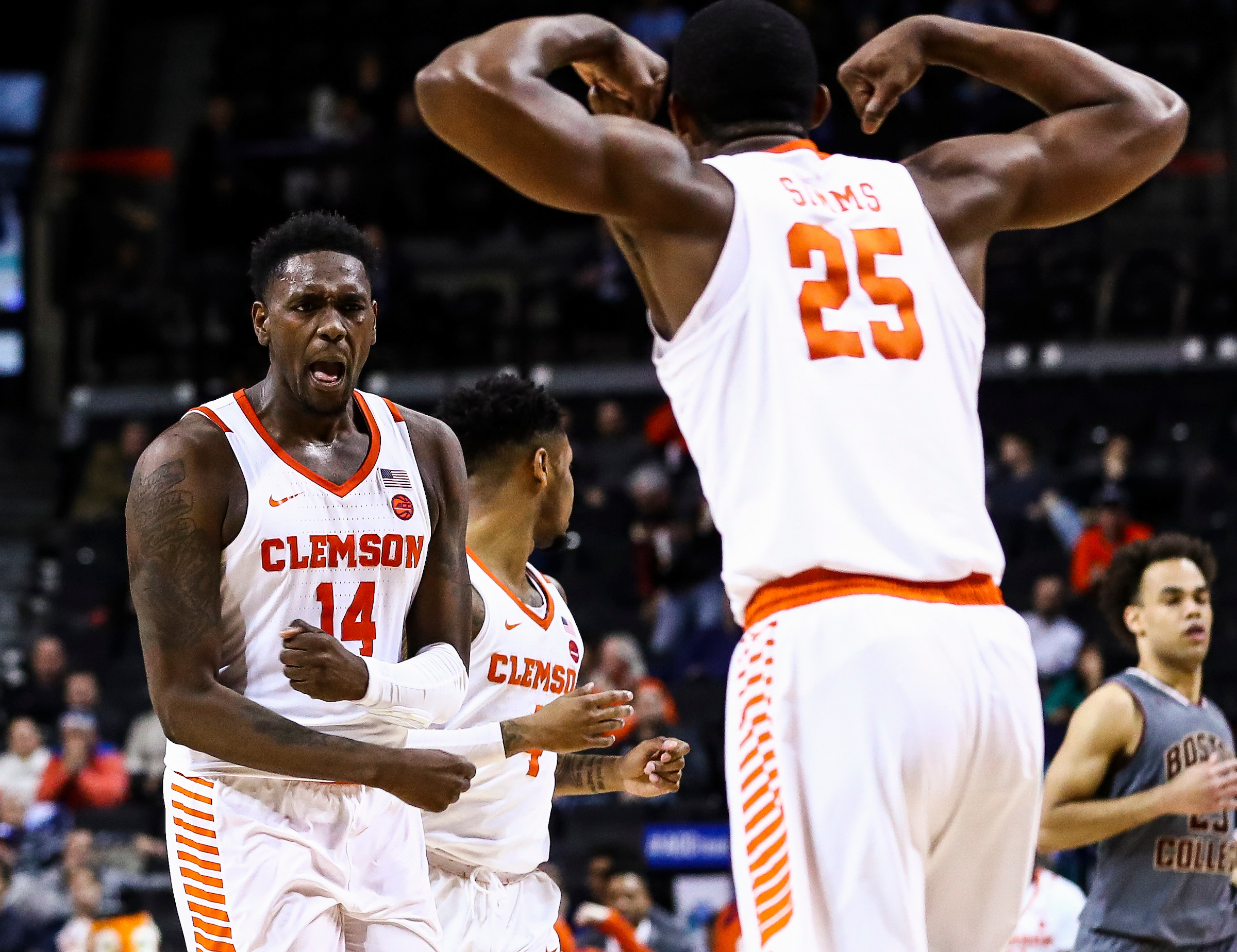 BOX SCORE
BROOKLYN — Behind two 20-point scorers, Clemson University men’s basketball was triumphant in the ACC Tournament quarterfinals with a season-high 90 points en route to an eight-point victory over Boston College, 90-82, on Thursday afternoon inside the Barclays Center.
The Tigers (23-8) were led by Gabe DeVoe who posted his fourth 25-point outing of the season and of his career – tying his career-high – and making 8-of-18 shots from the floor and drilling three 3-pointers in the effort. DeVoe was a perfect 6-for-6 from the charity stripe. Joining DeVoe with a 20-point outing was Shelton Mitchell who posted a season-high 21 points on 6-of-12 shooting, including 7-for-8 at the foul line. Marcquise Reed and Aamir Simms also reached double-figures for the Tigers with 12 points and 10 points, respectively.
Clemson tied an ACC Tournament program record with 12 made 3-pointers in the game. Both DeVoe and Anthony Oliver II made three each. Oliver II scored a career-high nine points off the bench.
Elijah Thomas narrowly missed his ninth double-double of the season with eight points and a team-high 12 rebounds. His 10th double-digit rebounding game of the season.
Clemson got down 7-0 in the opening 2:26 of the game and trailed 12-3 at the 15:17 mark of the opening stanza. Over the next 3:08, the Tigers went on a 15-4 run to gain its first lead of the game at 18-16. The run eventually became a 23-5 advantage. The Tigers pushed their lead to as many as 13 in the first half, but would take a seven-point lead into the break. Its 43 first half points was tied for the second most scored by Clemson this season.
With 13:45 left in regulation, Clemson held its largest lead of the game at 16 points with a 55-39 lead over the Eagles (19-15). Boston College slowly but surely clawed its way back into the game and trailed by just two at 63-61 with 5:49 to go. After going just 2-for-2 at the foul line in the first half, the Tigers finished the last five minutes of regulation 16-of-18 from the charity stripe to help seal the win.
Clemson advances to Friday’s ACC Tournament semifinals against No. 1-seeded Virginia. Tip time is 7 p.m.
Notes: Clemson earns its 23rd win of the season – tying for the most wins under head coach Brad Brownell while at Clemson (2013-14) … with the win, Clemson moved to 2-0 against Boston College this season and 3-0 all-time in the ACC Tournament … Gabe DeVoe notched his fourth 25-point game of the season … the Tigers are 4-0 in all of those games … Shelton Mitchell notched his second 20-point game of the season with a season-high 21 points … Elijah Thomas grabbed 10+ rebounds for the 10th time this season … Anthony Oliver II scored a career-high nine points – all on threes … Clemson tied a program record with 12 made threes in an ACC Tournament game … Clemson’s 90 points were a program record for an ACC Tournament game … the Tigers’ seven turnovers were the lowest total since a 72-70 win at Georgia Tech … Aamir Simms tied his career-high with 10 points.