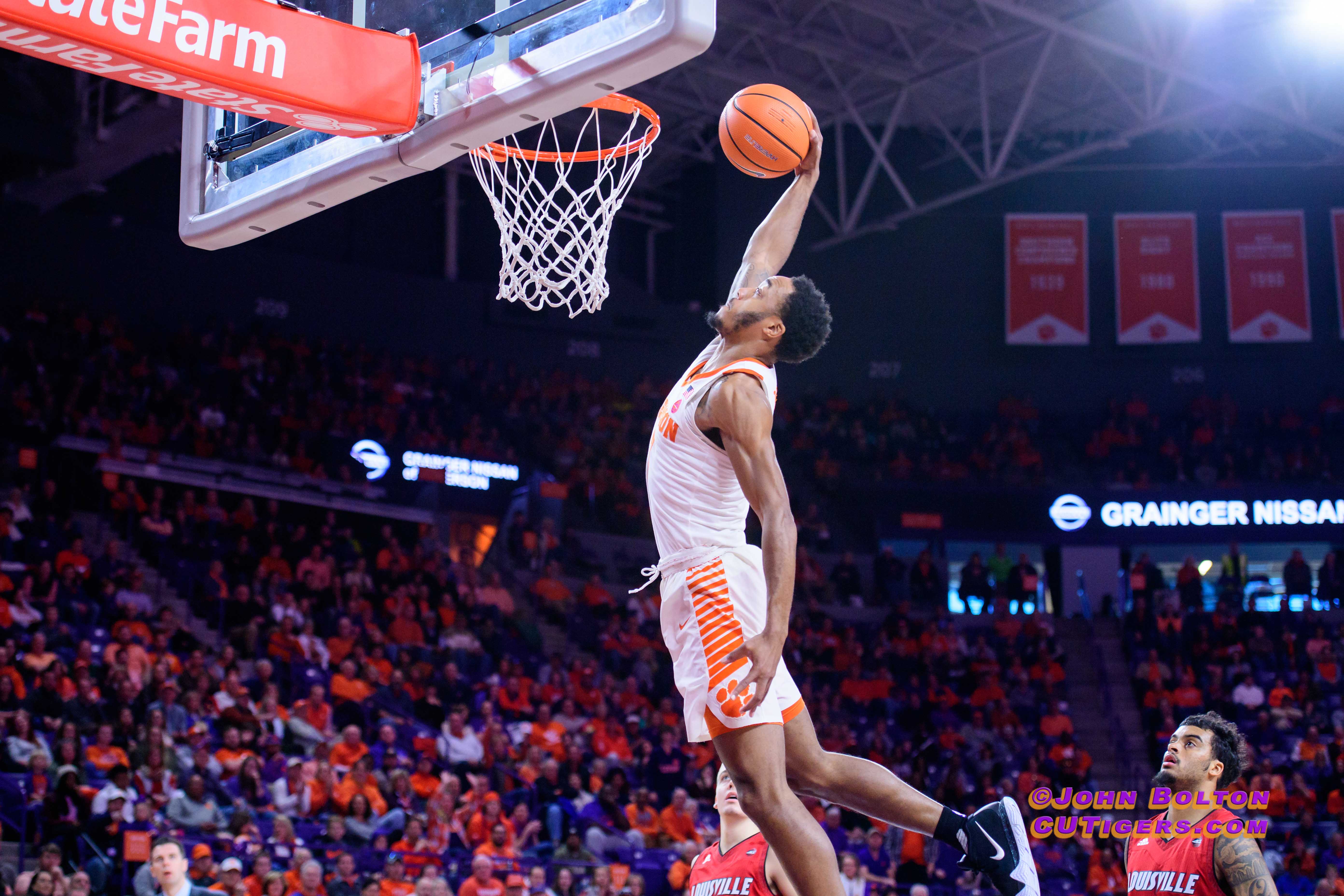 Photo by John Bolton CUTigers.com
CLEMSON, S.C. — Clemson University men’s basketball earned an at-large bid into the 2018 NCAA Tournament as a No. 5 seed and will face the No. 12 seed New Mexico State in San Diego, Calif. on Friday, March 16 at in the first round.
This marks the first time since head coach Brad Brownell’s inaugural season at Clemson that the Tigers have advanced to the NCAA Tournament. The Tigers will be making their 12th tournament appearance overall. All have taken place since 1980.
Clemson enters the game with a 23-9 record, including an 11-7 mark in regular season ACC games. The 11 victories in conference play proved to be the most in Clemson history – tying the all-time record for wins in any conference. They also won 11 games in the Southern Conference during the 1951-52 season.
A trio of Tigers earned All-ACC postseason accolades when the regular season concluded. Marcquise Reed was named to the All-ACC second-team, Gabe DeVoe earned All-ACC honorable mention, while Elijah Thomas was named to the All-ACC Defensive team.
The Tigers are led in scoring by Reed with a 15.9 average. Reed has posted eleven 20-point games this season, including a career-best 28 points in a loss at Virginia Tech (Feb. 21).  Reed leads the team with 1.7 steals per game, which ranks second in the ACC. He is one of just 14 players in the country that is currently averaging at least 15.5 points, 4.5 rebounds, 3.0 assists and 1.5 steals per game.
Five Tigers are averaging double-figures, including senior Donte Grantham who has been out for the season following a knee injury which he suffered in the Tigers’ Jan. 20 win against Notre Dame. This marks the third season in which Clemson has had that many averaging double-figures (2006-07; 2007-08).
Senior Gabe DeVoe is third in scoring this season with a 13.2 average. DeVoe leads Clemson in 3-pointers with 75 this season – just five away from tying for 10th all-time for a single season in Clemson history. His 158 career threes places him into the top 10 in Clemson history.
The first Clemson Tiger from the state of Texas, junior Elijah Thomas, is nearly averaging a double-double with 10.8 points and 7.9 rebounds per game. He leads the team in blocks with 71 (2.2 per game). He ranks fourth in total blocks in the ACC and fifth in blocks per game, while he is 27th in the country in both categories.
The Tigers have been very good from the free throw line this season. As a team, Clemson is second-best in the league and 40th in the country. Both Reed (fourth) and Shelton Mitchell (fifth) rank in the top five of free throw shooters in the ACC.
Clemson’s most successful NCAA run came in 1980, the first year Clemson was selected. The Tigers won three tournament games under head coach Bill Foster and reached the Elite Eight of the tournament before losing to UCLA. Clemson also made the Sweet 16 in 1990 under Cliff Ellis and 1997 under Rick Barnes.
Coach Brownell has taken three different programs to the NCAA Tournament. He previously took UNC Wilmington in 2003 and 2006, Wright State in 2007 and Clemson in 2011. He took each school to the tournament in his first year with the program.
The Tigers will play the 12th seeded New Mexico State Aggies on Friday, March 16 in San Diego, Calif. The Aggies finished 28-5 overall this season, including 12-2 in the Western Athletic Conference.
Zach Lofton leads the Aggies in scoring with 19.8 points per game, while Jemerrio Jones joins him in double-figures with 11.1 per contest. Jones leads the team with 13.1 rebounds per game.
Both the Aggies and Tigers had one common opponent during the season as New Mexico State defeated the Miami Hurricanes in a tournament in Hawaii 63-54.
This will serve as the first matchup between Clemson and New Mexico State in program history.