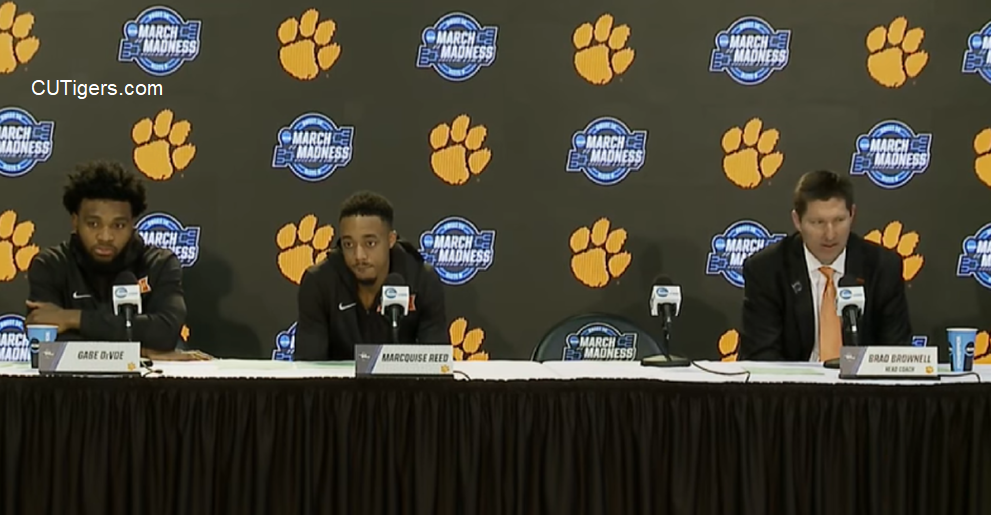 OMAHA — Gabe DeVoe, aka Bobby Buckets, held court on Friday night in what proved to be his final game in a Clemson University men’s basketball uniform. The senior guard scored a career-high 31 points in a four-point loss to Kansas in the 2018 NCAA Tournament Sweet 16.
DeVoe’s performance puts him into the upper echelon of Clemson basketball greats. DeVoe’s 31 points is the most scored by a Tiger in the NCAA Tournament (previous best was Dale Davis with 26 vs. LaSalle in 1990).
It marked another first on Friday with DeVoe becoming the first Clemson player to scored 20+ points in three consecutive NCAA Tournament games.
DeVoe’s performance wasn’t done in the scoring column, he became just the 27th member in Clemson history to achieve a “Triple Leadership”, leading the Tigers in points (31), rebounds (nine) and assists (three).
Clemson battled back and forth in the early going with Kansas, but towards the end of the first half, the Tigers (25-10) let the Jayhawks (30-7) finish the opening stanza on a 15-5 run to lead by 13 at the break. The Tigers’ second-largest halftime deficit of the season.
The Tigers found themselves down by as many as 20 points on a few occasions in the second half, but wouldn’t ultimately give in to the Jayhawks. Down 62-42, Clemson engineered a 26-12 run to pull to within just six after Shelton Mitchell’s second dunk of the season.
Clemson would pull to within four twice, but would fall 80-76.
Both Marcquise Reed and Mitchell also finished in double figures with 13 and 12 points, respectively. Elijah Thomas grabbed eight boards in the contest.
The Tigers finish the season tying the program record for wins with 25. Clemson finished tied for third in the ACC after being picked 13th in the preseason – the largest placement differential between preseason prediction and postseason finish in ACC history.
Notes: Clemson tied a program record for wins in a season (25) … they also broke a program record for ACC wins in a regular season with 11 … Clemson reached the Sweet 16 of the NCAA Tournament for the first time since 1997 … Gabe DeVoe is third all-time in scoring in the NCAA Tournament (75 points) … his average is first all-time with 25.0 points per game in three contests, third in points (75), fourth in field goals (28) and second in threes made (12) …  he posted the 27th “Triple Leadership” in program history against Kansas – leading the team in points, rebounds and assists … DeVoe finishes his career 64 points shy of 1,000 (936) … his 31 points are the most by a Tiger in his final game since Larry Nance had 34 vs. Temple in a NIT game on March 12, 1981 … DeVoe is the first Clemson guard with at least 30 points and nine rebounds in the same game since Will Solomon had 43 and nine vs. Virginia on Jan. 15, 2000 … Donte Grantham’s 1,100 career points ranks 33rd all-time in Clemson history.