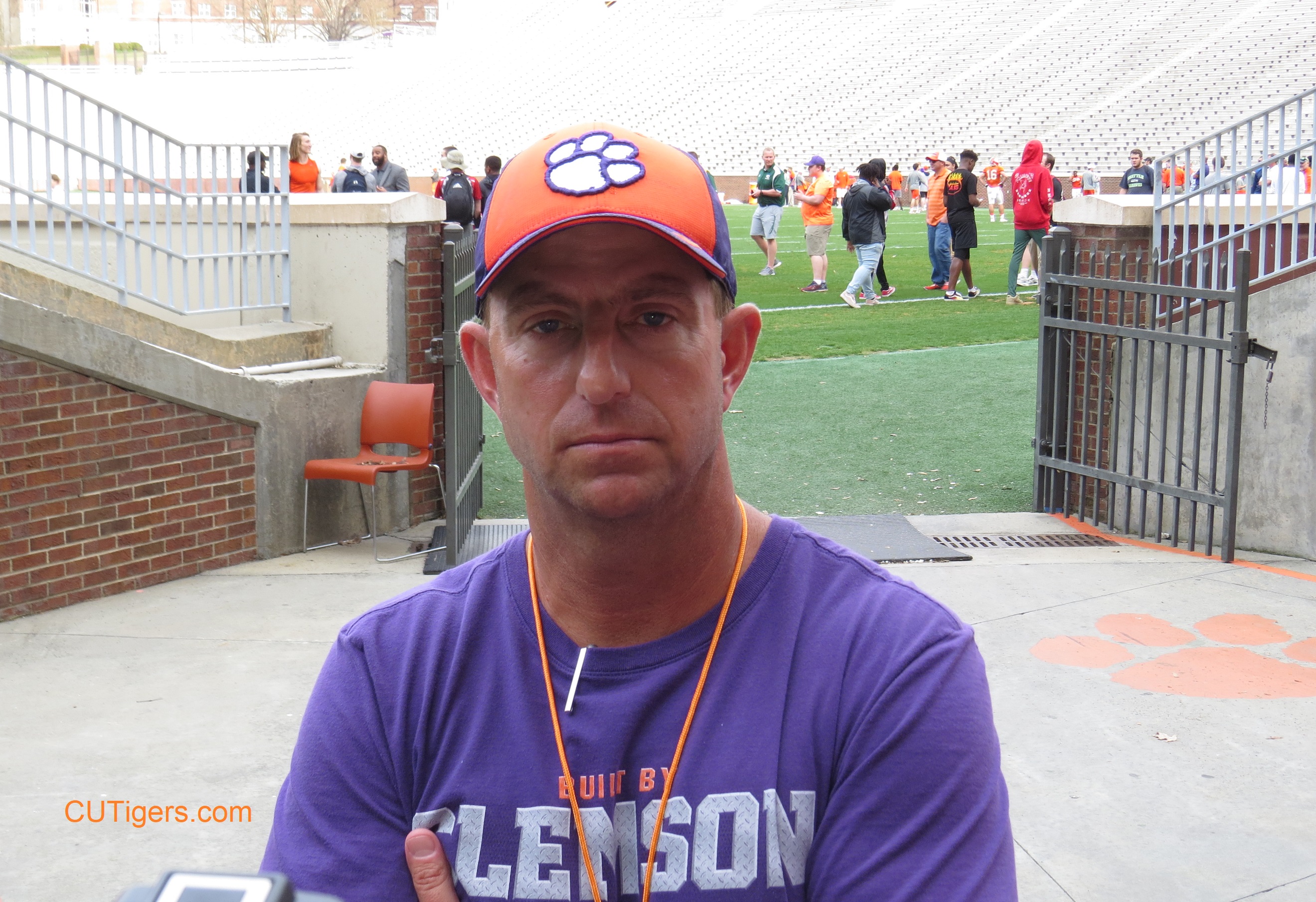 Clemson, S.C.—All four Clemson quarterbacks threw at least one touchdown pass in a 90-minute scrimmage at Memorial Stadium on Wednesday.  It was the second scrimmage and 10th practice of the spring for Dabo Swinney’s Tigers.  The team will take a week off for Easter and return to practice April 4.
The offense had the upper hand from the beginning of the workout.    Kelly Bryant threw a 65-yard touchdown pass to Amari Rodgers on the third play of the scrimmage. It was the first of eight plays of 20 yards or more for the Clemson offense.
Bryant threw four touchdown passes, including two in a goal line drill, while Chase Brice, Hunter Johnson and Trevor Lawrence all had one touchdown pass apiece of at least 20 yards.  Travis Etienne was the top rusher with 81 yards and a touchdown.  Cornell Powell was the top receiver with 81 yards, while Tee Higgins had a pair of touchdown receptions. Tavien Feaster scored three total touchdowns.
“The offense got off to a fast start,” said Swinney.  “The offense made a lot of big plays, including on that first drive.  But the offense could have been more consistent.   It seemed like it was a big play or a sack or a short gain.
“The defense just didn’t have the right body language today.  Perhaps it was a carryover from having nine days off for spring break.
“There is a lot of film to evaluate.  Like any time you have  a team scrimmage there is  a lot of good and a lot that wasn’t so good.    If I had to pick a standout today it would be the kicking of Alex Spence.  He was three-for-three on field goals and continues to hit the ball well.  I thought Cornell Powell stood out as well.  I thought Trayvon Mullen and A.J. Terrell played well on defense."
“The quarterbacks all made some big plays, but we took too many sacks.  We have to get rid of the ball in some of those situations.   Overall I was please with all four quarterbacks."
The defense did have seven sacks by seven different players (Austin Bryant, Tanner Muse, Denzel Johnson, J.D. Davis, Christian Wilkins, Tre Lamar and Clelin Ferrell).  Redshirt freshman  LeAnthony Williams had a 30-yard interception return, two passes broken up and three tackles.
Clemson has five spring practices remaining, including the Spring Game on April 14 at 2:30 p.m. at Memorial Stadium.   Admission is free.