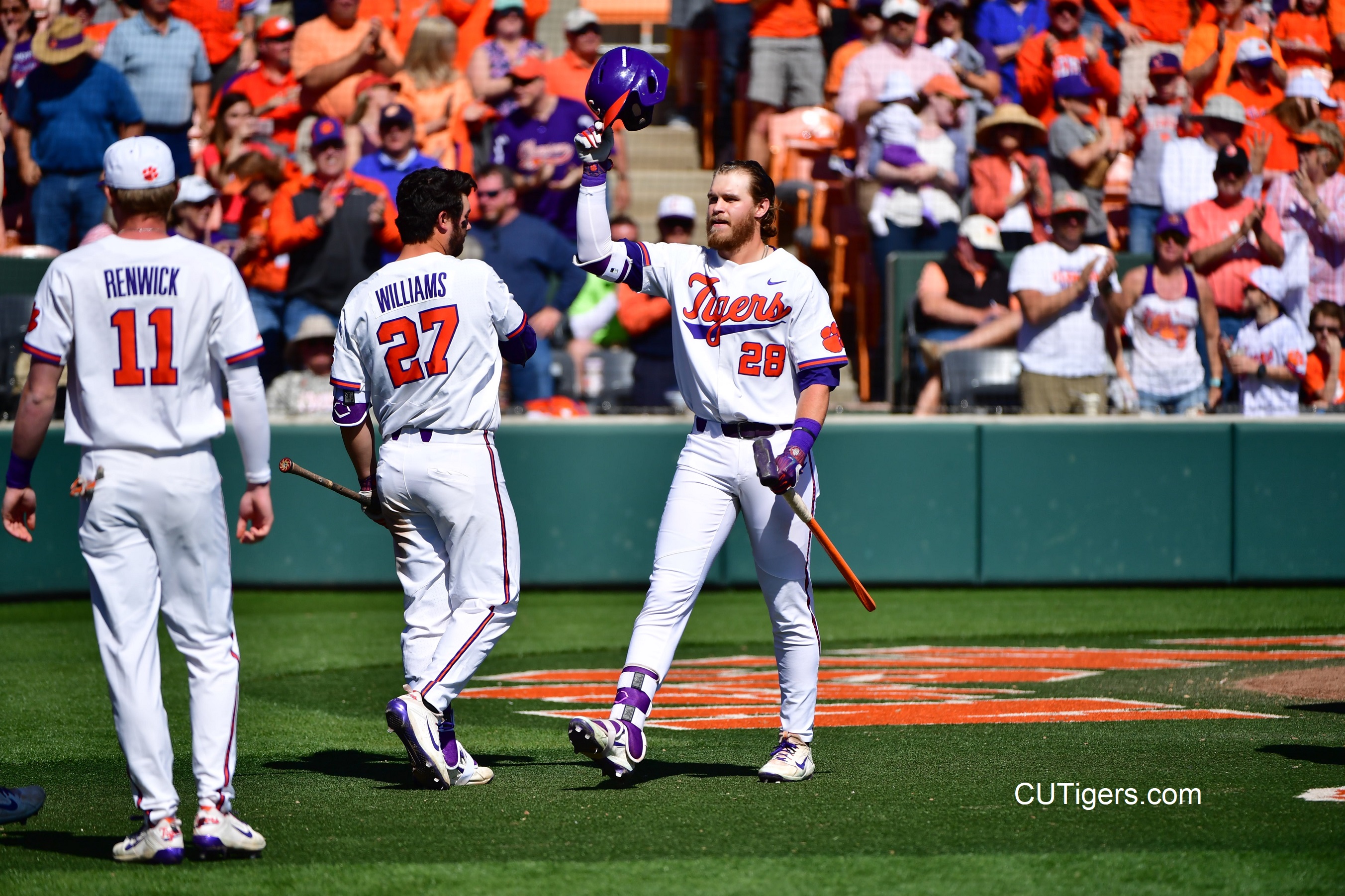 PITTSBURGH - No. 4 Clemson completed the sweep of Pittsburgh with a 5-0 victory at Charles L. Cost Field on Saturday afternoon. The Tigers (43-13, 22-8 ACC), who secured at least a share of the ACC regular-season championship, recorded their 11th ACC road win in a row to set a school record and won their sixth game in a row overall. The Panthers fell to 27-25 overall and 11-19 in ACC play.
Ryan Miller (5-1) earned the win in relief, as he gave up one hit and no runs in 1.2 innings pitched. Pittsburgh starter Chris Gomez (2-1) suffered the loss.
Seth Beer lined a two-out single in the third inning to score the game's first run, then an alert Kyle Wilkie, who extended his hitting streak to 22 games with a single, scored on the play. Beer led off the sixth inning with his 19th home run of the season. In the seventh inning, Chris Williams lined a two-run single.
Clemson is either the No. 1 or 2 seed in the ACC Tournament, which will be played at Durham (N.C.) Bulls Athletic Park from Tuesday to Sunday. The Tigers’ first game is Wednesday or Thursday on RSN and ACC Network Extra. Clemson's opponents, game dates and game times will be announced by the ACC on Sunday.
GAME 2:

PITTSBURGH - No. 4 Clemson scored three runs in the first inning and held on for a 4-1 victory over Pittsburgh at Charles L. Cost Field on Friday afternoon to claim the ACC Atlantic Division title, its first since 2010 and its first outright since 2006. The Tigers also took a 2-0 lead in the series, securing their fifth ACC road series win for the first time in school history, and won their 10th ACC road game in a row.
Clemson (42-13, 21-8 ACC) jumped out to a 3-0 lead in the first inning on Patrick Cromwell's bases-loaded walk and Drew Wharton's two-run single. Nick Banman grounded a two-out, run-scoring single in the fourth inning for Pittsburgh (27-24, 11-18 ACC). Seth Beer led off the eighth inning with his 18th home run of the season. Kyle Wilkie extended his hitting streak to 21 games, but Logan Davidson's 15-game hitting streak came to an end.
Tiger starter Brooks Crawford (8-2) earned the win by allowing just five hits, one run and one walk with six strikeouts in 5.1 innings pitched. Ryley Gilliam pitched the ninth inning to record his 11th save of the season. Panther starter Dan Hammer (2-5) suffered the loss, as he yielded two hits, three runs and four walks with four strikeouts in 5.0 innings pitched.
GAME 1:

PITTSBURGH - Logan Davidson became the first Tiger in history to hit a home run from both sides of the plate and Patrick Cromwell added two home runs in No. 4 Clemson's 16-6 victory over Pittsburgh at Charles L. Cost Field on Thursday night. The Tigers, who took a 1-0 lead in the series, improved to 41-13 overall and 20-8 in the ACC, while the Panthers fell to 27-23 overall and 11-17 in ACC play.
Pittsburgh grabbed the lead with a run in the first inning, then Clemson erupted for six runs in the third inning. A one-out walk by Jordan Greene followed by four singles in a row and Cromwell's two-run homer highlighted the uprising. Kyle Wilkie, who extended his hitting streak to 20 games, Seth Beer and Chris Williams all had run-scoring singles in the frame. Beer lined a run-scoring double in the fourth inning, then Davidson, who earlier extended his hitting streak to 15 games, blasted a long solo homer as a righthanded batter in the top of the sixth inning.
Pittsburgh answered with four runs in the bottom of the sixth inning, then Davidson crushed a two-run home run as a lefthanded batter in the seventh inning, his second of the game and 13th of the season. Cromwell added his second homer, a solo shot and his seventh of the year, in the eighth inning. Sam Hall led off the ninth inning with his second homer of the year, then Beer hit a two-run homer, his 17th of the season and Clemson's season-high sixth of the game, and Cromwell lined a run-scoring double.
In his first career ACC start, freshman righthander Spencer Strider (5-1) earned the win. He allowed only three hits, two runs and two walks with a career-high-tying seven strikeouts in 5.0 innings pitched. Panther starter Matt Pidich (5-2) suffered the loss, as he gave up five hits, five runs and two walks with three strikeouts in 2.1 innings pitched.