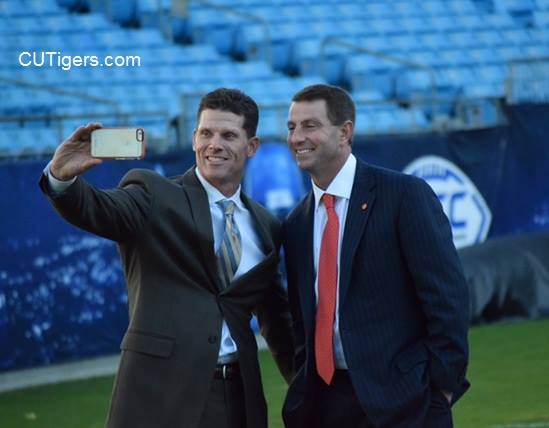 Photo by Trevor Groves CUTigers.com
Defensive Coordinator and Broyles Award winner Brent Venables signed his extension with Clemson on Thursday morning, a deal that had been in the works for quite some time according to Dabo Swinney. Venables will receive $11.6 million in base salary over 5 years, or 2.3 million per year. The annual amount is second only to LSU Defensive Coordinator Dave Aranda, who recently surpassed Venables just a few months ago as the highest annually paid coordinator in the nation, but Aranda's entire contract is only worth $10 million. Therefore, in overall contractual terms, Clemson has made Venables the highest-paid coordinator in the nation.
I've said for quite some time that despite all the speculation on Venables leaving Clemson for a head coaching job, I did not foresee it in the next several years. Although there is no buyout for this contract, it seems to indicate that he is perfectly happy where he is for the next 5 years, and, of course, Venables will be coaching his son, Jake, at LB during that time as well. The dominance of the Clemson defense will remain an annual theme for at least 5 more years.