WHO WILL START AT QB FOR CLEMSON?

Well here we are, at the precipice of the 2018 season opener, and the uncertainty surrounding the quarterback competition is as thick as it was in July. On Monday, Dabo will establish a depth chart for the Furman game. So how will it all unfold at the most important position in all of sports on the second-ranked team in all the land? 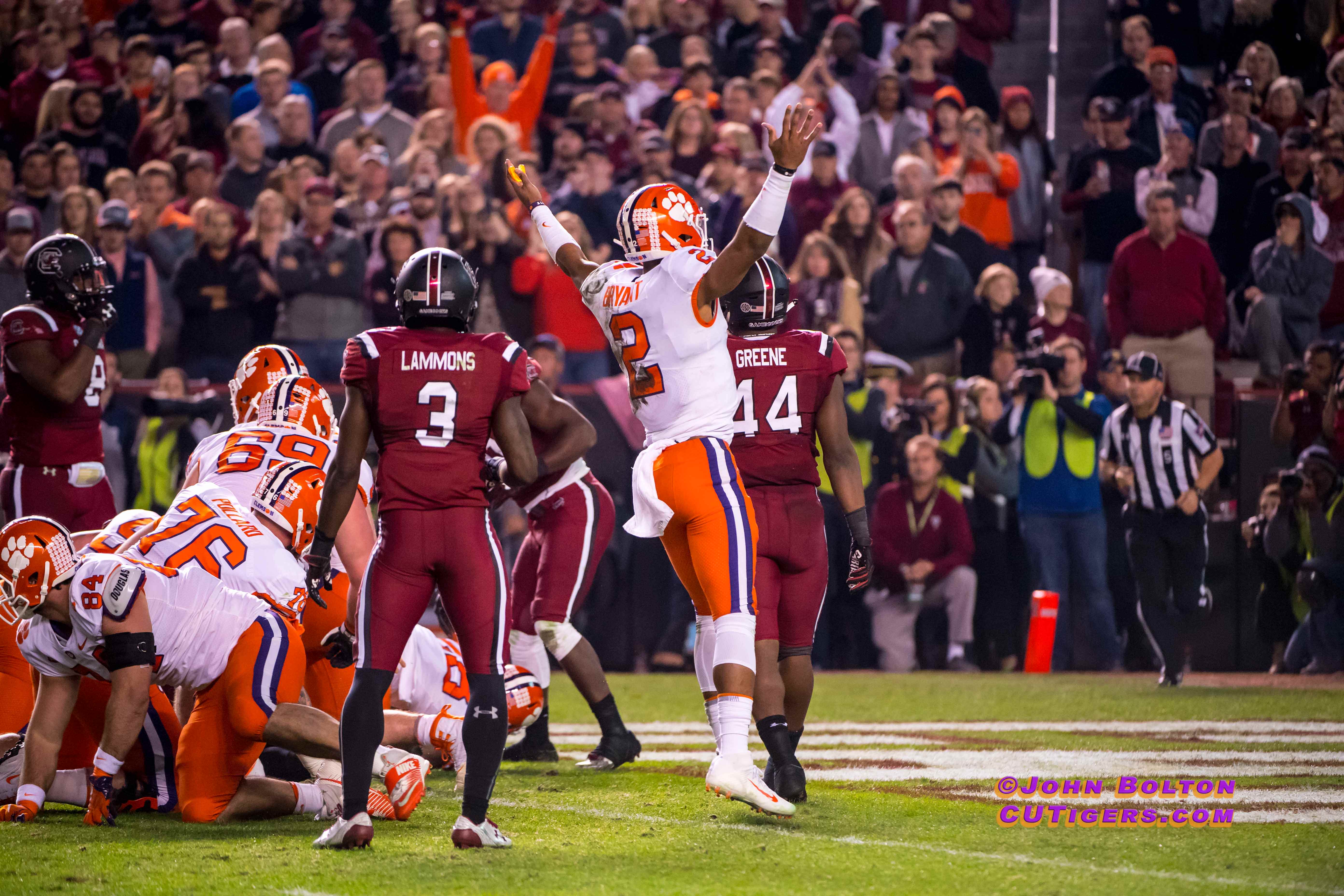 Many of you will recall that following the Orange and White Game, I predicted—based purely on intuition—that despite Trevor Lawrence’s brilliant showing in the O&W Game, I thought ultimately Kelly Bryant would start the opener against Furman but that Trevor Lawrence would make an appearance in the first half and potentially start the Texas A&M game, depending on how the two performed. I prognosticated that the Tigers could even utilize a dual quarterback system for the first time—something akin to what Urban Meyer and Florida did with Tim Tebow his freshman year en route to a national championship in 2006. I have asked both Dabo and Brandon Streeter if that is something they could envision themselves doing, and they both said unequivocally that if two players deserved to play, then they would both play. Given that Kelly Bryant and Trevor Lawrence each excels in an area in which the other wanes, I still see this as a real possibility well into the season. Kelly Bryant, though competent, will never be deep ball threat that Trevor Lawrence is. And conversely, Lawrence, though a competent runner, will never be the play-maker with his legs that Bryant is. Forcing teams to prepare for both threats would be a major advantage for the Tigers, and it could be one of the rare cases in which a two-quarterback system actually works. Dabo has always scoffed at the old axiom that “if you have two quarterbacks, you don’t have one.” And he is right to reject that premise in his situation—the Tigers have three quarterbacks that could legitimately win an ACC Championship as starter. 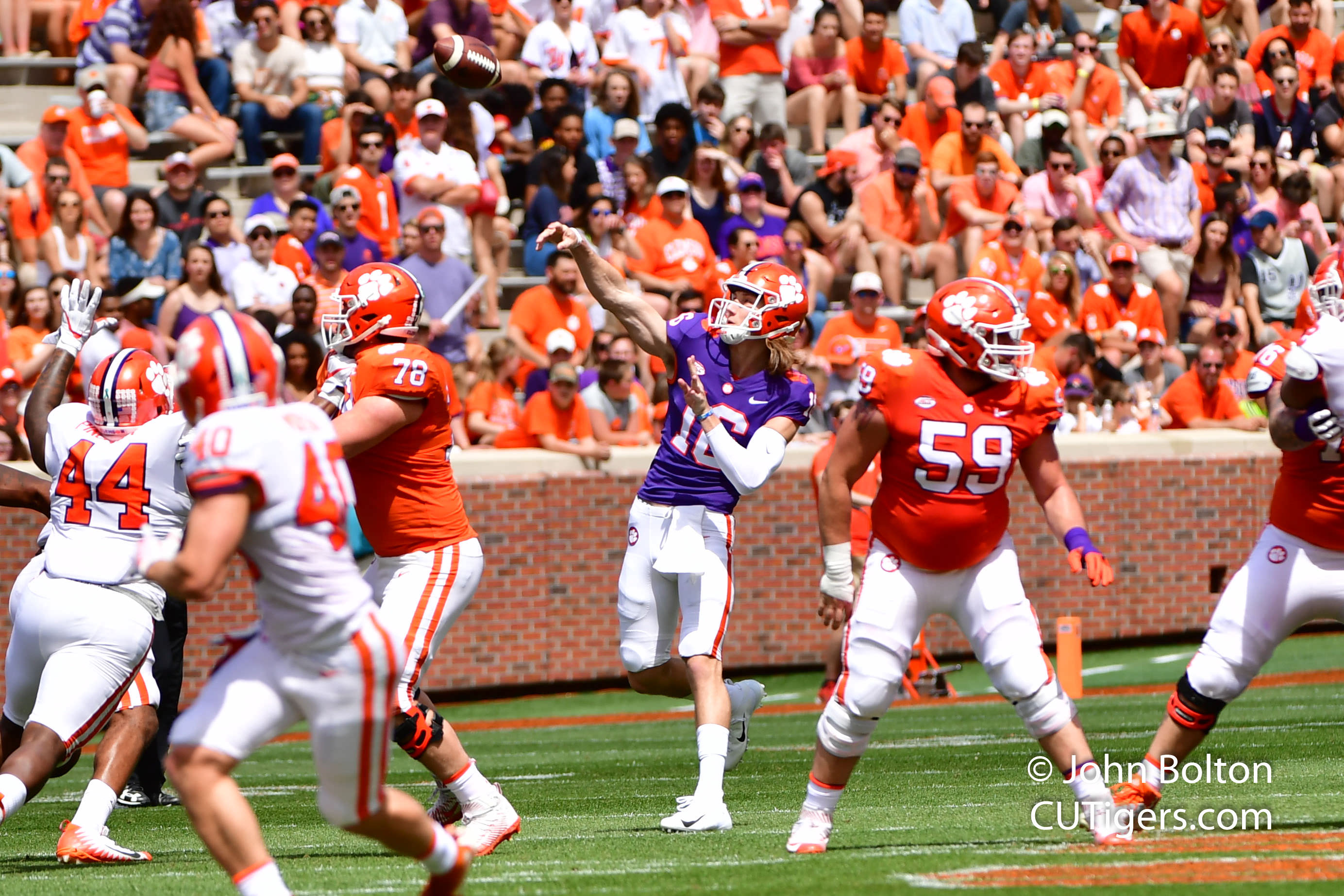 Dabo has always said that the best player will start, and that is the case at every position. Not even three-year starter Christian Wilkins is anointed the starter for 2018. He has to earn the starting spot in camp and at every practice. Dabo has also said, however, that the tie will go to the incumbent, and he has maintained that it has been a very even competition throughout August. Beyond that, Dabo has a track record of loyalty to the veteran. He was faced with a similar decision in 2014 when he had a returning senior in Cole Stoudt and a talented true freshman in Deshaun Watson. We all remember what happened: Dabo started Stoudt for the first 3 games, including road games at Georgia and Florida State. Watson played some in Athens and played well. He took over in the first half of the FSU game, and the Tigers lost in overtime. Had Watson started the game, they might easily have won the game and consequently the Atlantic Division. Now, this situation is similar but obviously not identical. Cole Stoudt had never started before and certainly never led the team to an ACC title and the College Football Playoff like Kelly Bryant did last year. On the other hand, Deshaun Watson did not have an entire spring under his belt like Trevor Lawrence does—Watson was recovering from ACL surgery and was also not as muscular as Lawrence is now. But I believe that example does give credence to the idea that Dabo has a predilection for playing the elder statesman before the talented newcomer. I wonder, though, will the decisions he made early in 2014 creep into the back of his mind in the next few weeks when he will be faced with an even tougher decision?

Based on what we’ve learned about Dabo and his loyalty to players that have paid their dues, I still believe, as I did last spring, that Kelly Bryant will start the season opener against Furman. I think in order for Lawrence to supplant him, he will have to be much better—not just a little—than Bryant, and from what I have gathered in our talks with Dabo, that has not transpired. Also, the fact that the Tigers arguably have the nation’s best defense makes it that much easier for Dabo to stay in his comfort zone with Bryant. He knows Bryant won’t make many mistakes and that he can win every game on the schedule with Bryant.

This whole situation is eerily similar to the one Alabama was in last season. After Alabama’s spring game in 2017, before many at ESPN had even heard the name Tua Tagovailoa, I said that I thought he might possibly win the starting job over Hurts. Tua looked that good in the spring game. It’s the same thought many Clemson fans had after getting their first glimpse of Trevor Lawrence in Death Valley. What happened? Hurts kept his job and led Alabama to the CFP for a second time. However, as good and reliable as Hurts was, Alabama would not have won the national title if the talented freshman had not come into the game. Dabo might be faced with the exact same scenario this season. Kelly Bryant can win every game on the schedule and might even get the Tigers back to the National Championship Game, but is his down-field passing game good enough to win it all? Perhaps it is. Perhaps it has improved since last season—Dabo said recently that Bryant is playing at a whole other level. Perhaps with the defense and bevy of offensive weapons at his disposal, Bryant doesn’t have to be the passer Lawrence is to win a national title. Alabama certainly won titles without the likes of a Trevor Lawrence.

And let’s also remember this: Kelly Bryant should not be underestimated. In November of 2016, I was outside the indoor practice facility, waiting for our weekly Wednesday interview with Dabo along with the other three or four members of the media who regularly attend. I found myself the lone dissenter in a debate with the three senior writers for two of the leading Clemson websites, who all said that Kelly Bryant would NEVER play quarterback for the Tigers. They all said with absolute certainty that Bryant would either change positions or transfer and that Hunter Johnson would be the starter in 2017. That seems so comical now. In the interest of full disclosure, I did not predict Kelly Bryant would definitely be the starter, but I said that I thought he would be in the thick of the quarterback competition in August. They mocked me for taking that position and said that he wouldn’t even be playing quarterback in August. Fast forward a year and a half, and Kelly Bryant has an ACC title and College Football Playoff to his credit. He has been bucking the odds and so-called “experts” since he arrived at Clemson, so I’ll tell you this: I wouldn’t lay money against him. Keep in mind as well that Kelly Bryant—at this time, at least—owns the locker room. Clelin Ferrell made that unequivocally clear at ACC Media Day in Charlotte last month. That is a factor that is critical—especially with performance on the field being relatively equal.

Don’t get me wrong. Trevor Lawrence is a tremendous talent, and if it were my decision, I would play him in meaningful series—not just mop-up duty—throughout the season. Trevor Lawrence is the future. The only question is how near that future is. Make no mistake, it’s a good problem to have, and it’s going to be both exciting and fascinating to watch it all play out!