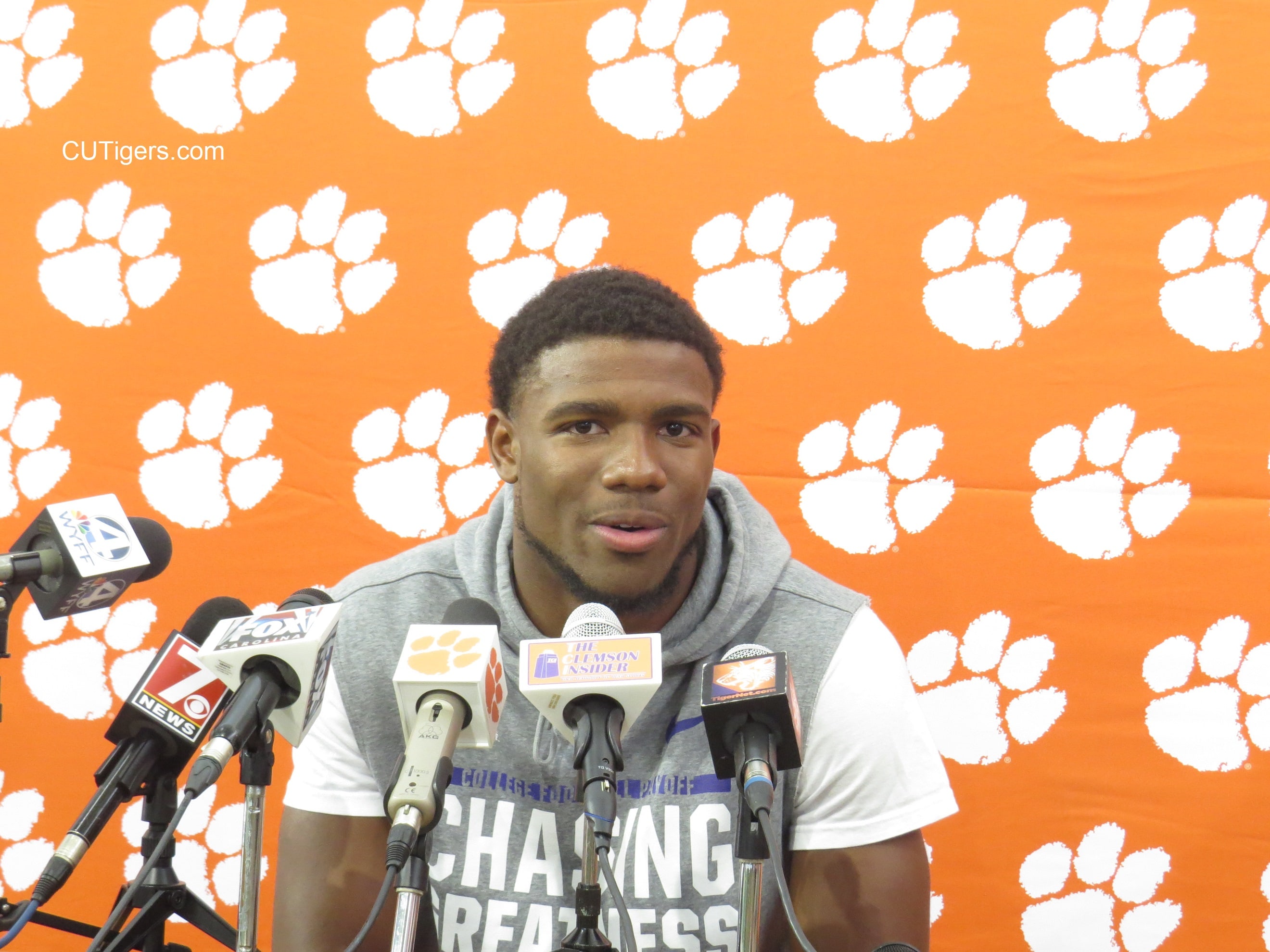 Photo by Trevor Groves CUTigers.com
The biggest news of the day was obviously the long-awaited announcement of the Tigers' starting quarterback for the season opener against Furman on Saturday. As I predicted yesterday (READ HERE) and as far back as last spring, senior incumbent Kelly Bryant retained his starting job with freshman phenom Trevor Lawrence nipping at his heels. Dabo said after one of the scrimmages that Bryant has elevated his game to a whole new level, but based on what Dabo told us on Thursday, Bryant does not have a significant lead on Lawrence as was the case last year, and this competition could go well into the regular season and beyond. So expect to see a heavy dose of Trevor Lawrence on Saturday and Chase Brice as well, for that matter. I would not be surprised to see Lawrence take the field in the first half or even start the second half against the Paladins. It will get very interesting if the two quarterbacks perform like they did in the Orange and White Game last April--Trevor Lawrence was clearly the better player that day. I do not anticipate that will be the case. Against a Furman defense that will pale in comparison to what they've seen every day throughout the spring and August, I expect both Bryant and Lawrence to shine in Death Valley on Saturday, and Bryant will likely be the starter again in College Station the following week. As I wrote yesterday, Bryant is good enough to win every game on the schedule and could very well be good enough to win another national title for the Tigers. But if Bryant continues to win while exhibiting less than impressive accuracy in the downfield passing game, will Dabo be faced with a similar decision forced on Alabama last season? That is to be determined.
I asked Tony Elliott about the tempo we can expect to see from the offense this season. The Tigers ran more total plays than any team in the nation last season, so they were already fast, but there has been a heavy emphasis on tempo all spring and throughout August camp. Tony said their target number of plays will still be 80 per game, as it has been in the past, but they will look faster than last season at times. Kelly Bryant reiterated that point.
Other than the quarterbacks, the most interesting thing about today's depth chart was probably the fact that Adam Choice was listed second, ahead of Tavien Feaster. I don't think that's as much of an indictment on Feaster as it is a sign that Choice had a very good camp. He has really carved out a niche for himself physically, and I think he could be somewhat of a short yardage and goal line specialist this season. I still expect Feaster to get plenty of touches and am excited to see what Dixon does in the second half! Garrett Williams was elevated to co-starter with Milan Richard at tight end, and Elliott said Williams had one of the best camps of anyone on the offense.
Venables talked a number of his players on defense, including Richard Yeargin's recent decision to retire from football (he will stay with the team as a student coach). I asked him about Mario Goodrich and Kyler McMichael--a couple of true freshmen in the secondary who the Tigers will likely need down the stretch. It seems Venables has been pleased with their progression over the last month. From a health standpoint, the Tigers are in pretty good shape. Mark Fields has been battling a knee but should be ready to go on Saturday. Venables said LB Jamie Skalski is "close," but that is the standard line we've been hearing from Dabo all August. It wouldn't surprise me if he ends up redshirting this season, and that would be somewhat of a disappointment--I was expecting Skalski to have a big year at linebacker, and he was also a special teams warrior. On the other hand, if they can get by without him until the post-season, it would be great for him to save a year of eligibility. Remember, he can play four games at the end of the season without using any eligibility, thanks to the new redshirt rule.
Finally, Kelly Bryant admitted that he was a little relieved to hear the official announcement today, but he has always been a pretty even-keeled guy when it comes to his demeanor, and all the competition talk didn't seem to phase him one bit since last April. He said that he knows Trevor will play but that he wouldn't be "looking over his shoulder" or trying to force plays.
We had good talks with Clelin Ferrrell, Amari Rodgers and Sean Pollard as well, and all the interviews are below. And remember, Dabo's weekly press conference is Tuesday at 11:00, so be sure to check back for that and more player interviews tomorrow!