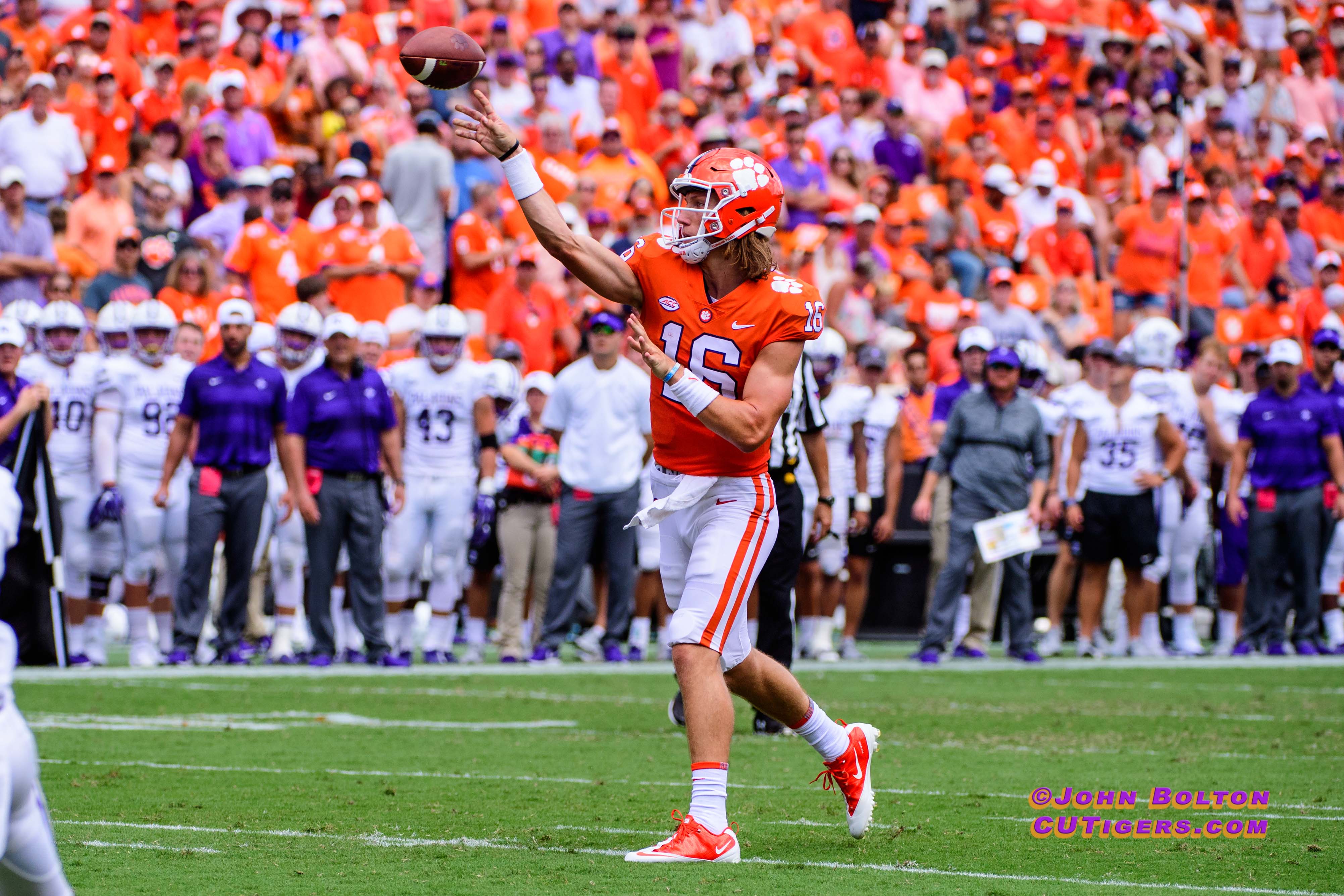 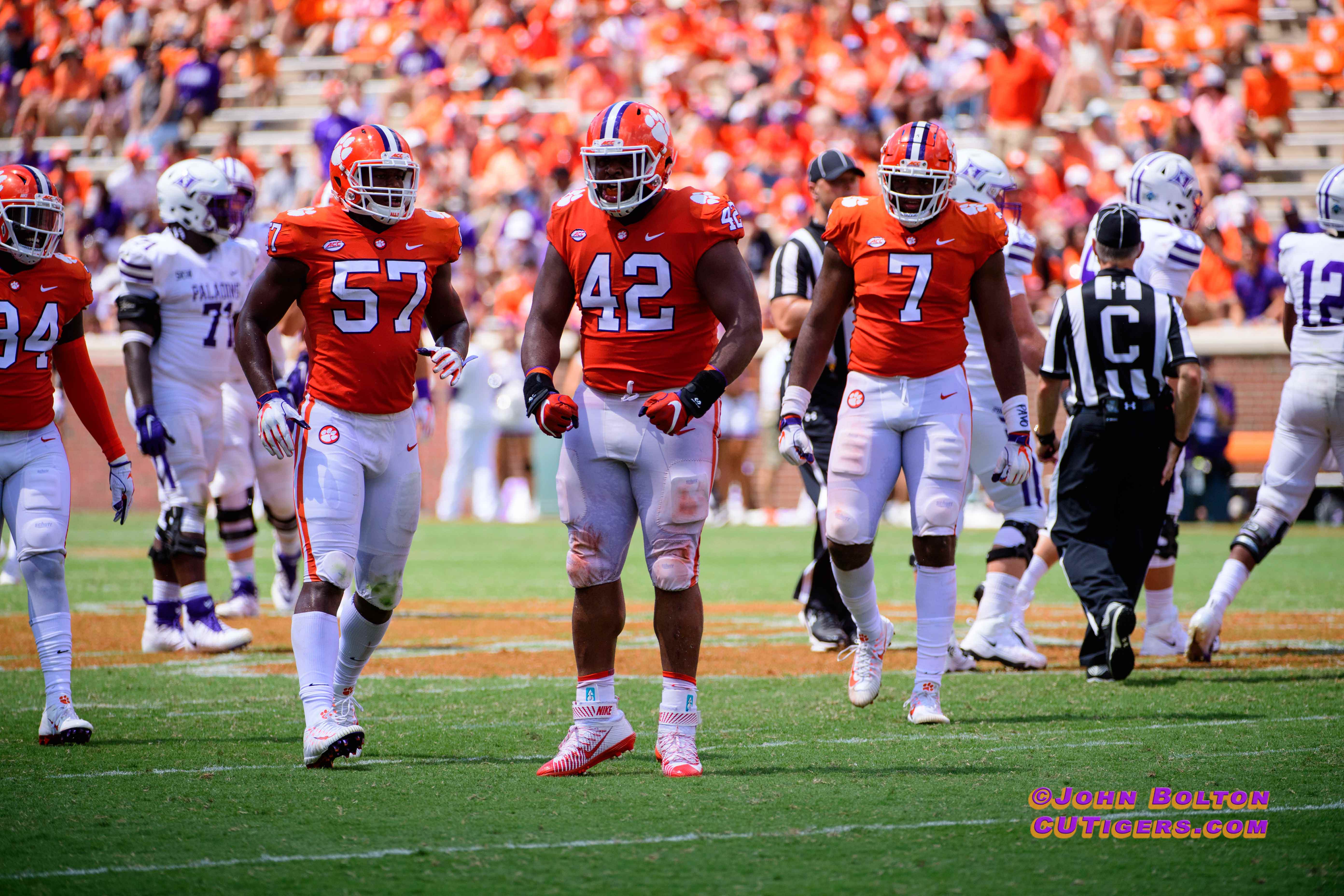 CLEMSON, SC – The second-ranked Tigers flexed their muscles and exerted their will on Saturday in Death Valley with a resounding 48-7 win over Furman, missing a shutout by just over a minute. The long-speculated quarterback situation played itself out in front of over 80,000 fans in the season opener. As Dabo announced on Monday, incumbent Kelly Bryant was the first QB on the field to lead the offense, but as I predicted (READ HERE), Trevor Lawrence came into the game before halftime, indicating this is a close, ongoing competition—Lawrence was not just coming into a blowout situation for mop-up duty. 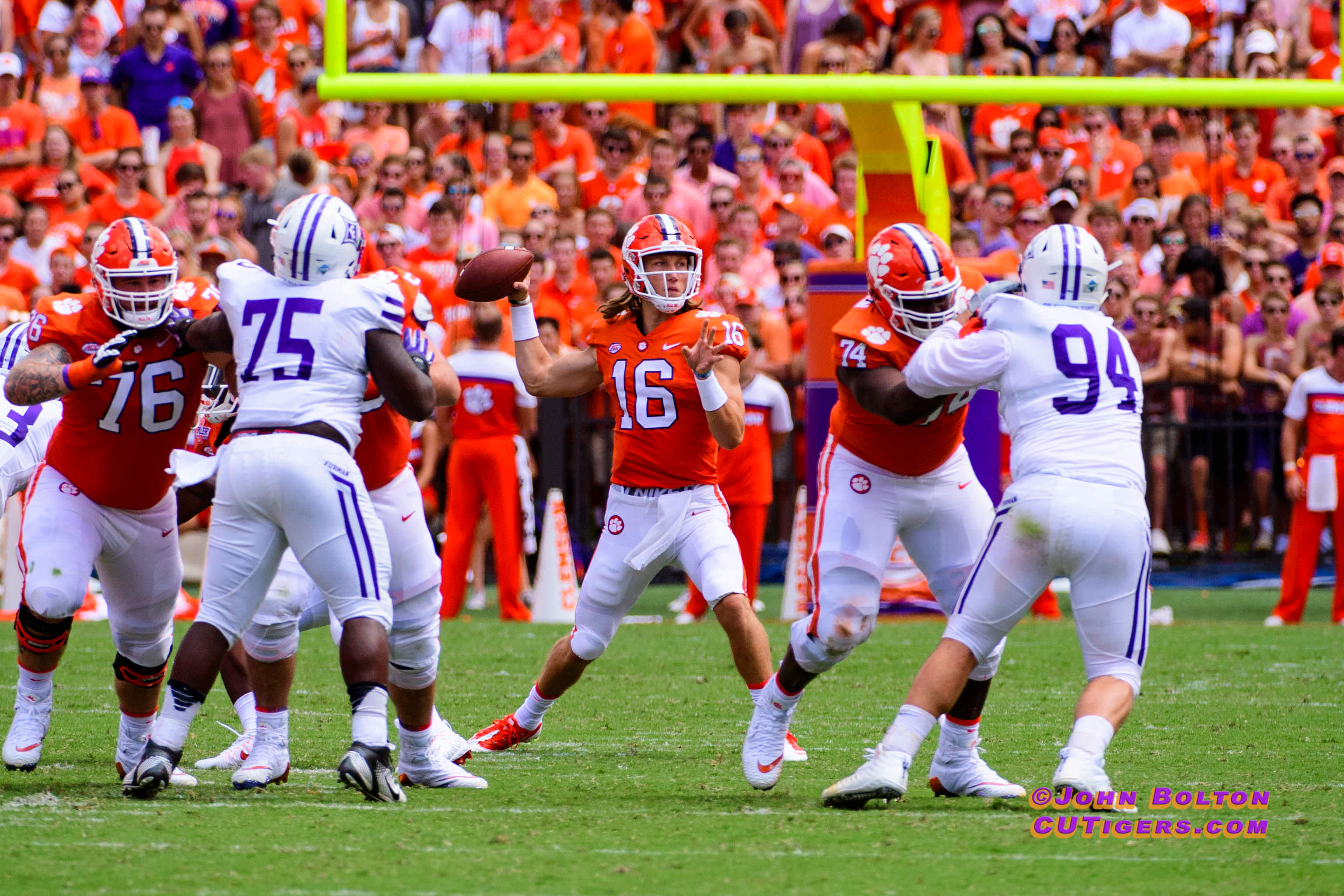 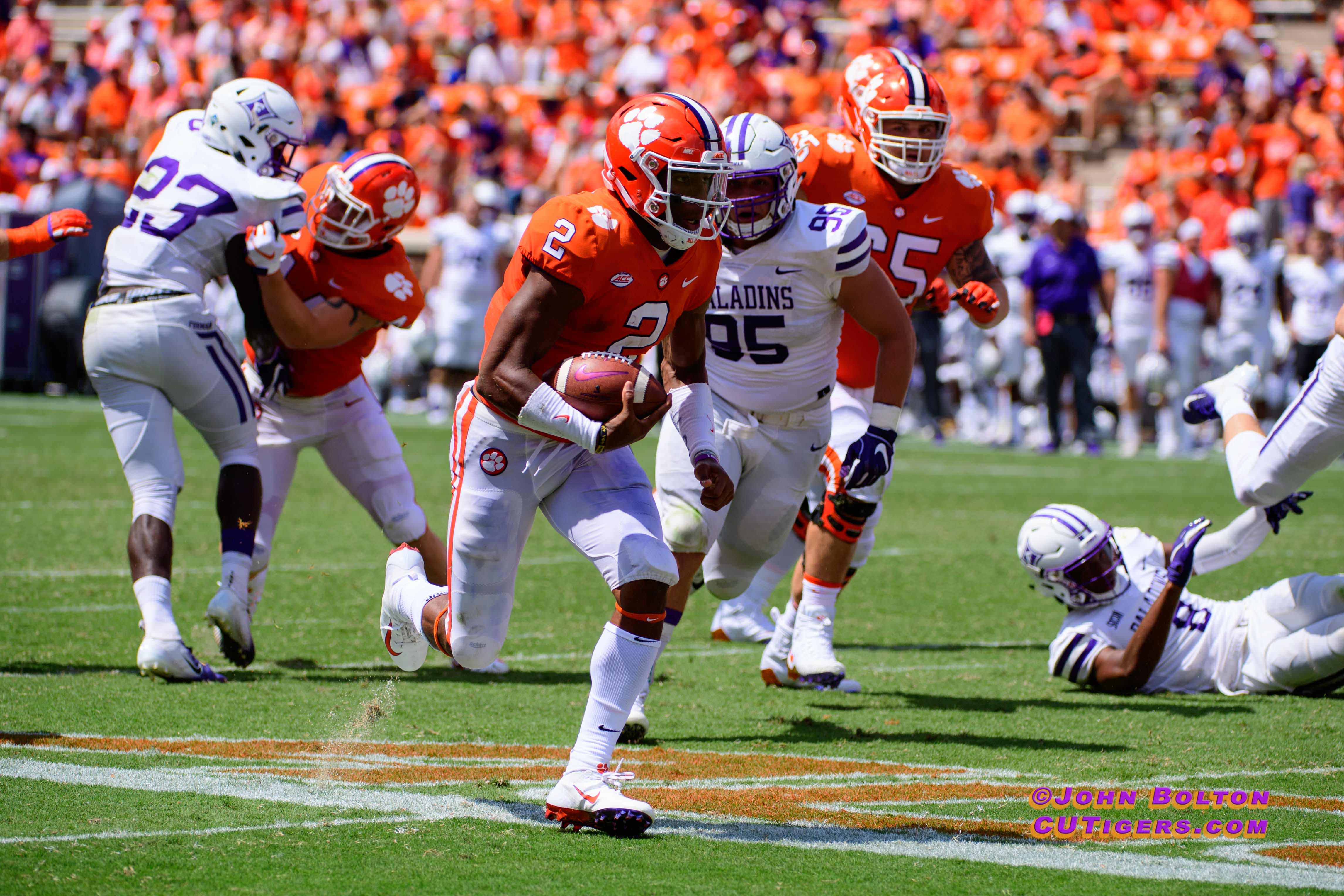 Both quarterbacks played well, but Lawrence was superb. He led the Tigers to points on all 5 of his drives, including 4 touchdowns. 2 of his touchdown drives went over 90 yards! In all, he was 9-15 for 137 yards, 3 touchdowns and no interceptions. Incidentally, Lawrence showed as much poise in our first interview with him (WATCH HERE) as he exhibited on the field. Kelly Bryant looked a little rusty on his opening drive, fumbling a snap and making 3 low throws. However, he soon settled in and made a perfect throw to Amari Rodgers for 40 yards and the Tigers’ first touchdown of the season. Bryant also ran for a 35-yard touchdown, his 15th career rushing TD. He was 10-16 for 127 yards on the day with one TD through the air and one on the ground. Each QB was sacked once. More on the quarterbacks in a bit, but the offense looked sensational on all fronts. Not perfect, but they demonstrated how loaded and explosive this offense will be. In fact, the Tigers did not punt until less than 10 minutes left in the game! They were only 4-12 on 3rd down but went for it on 4th down 4 times, converting twice. 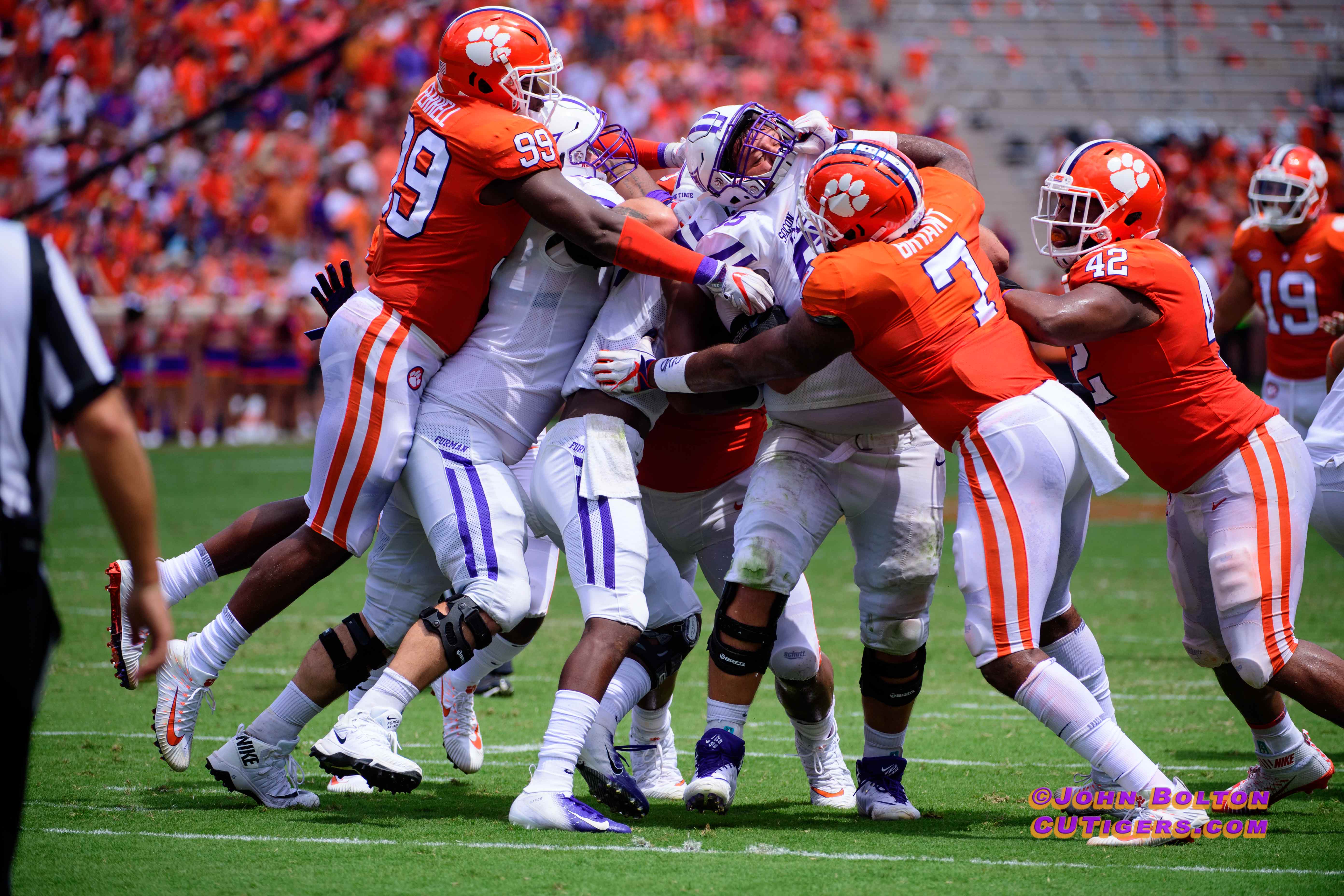 Defensively, the Tigers were as dominant as expected. In my game preview (READ HERE), I predicted the Tigers would allow 6 points. They gave up 7 on a late touchdown but were just over a minute away from the coveted shutout. It was, of course, the reserves that allowed the score. The Tigers allowed just 163 total yards and recorded 3 sacks against a team that allowed just 7 all of last season! They also had 10 tackles-for-loss and created 2 turnovers. 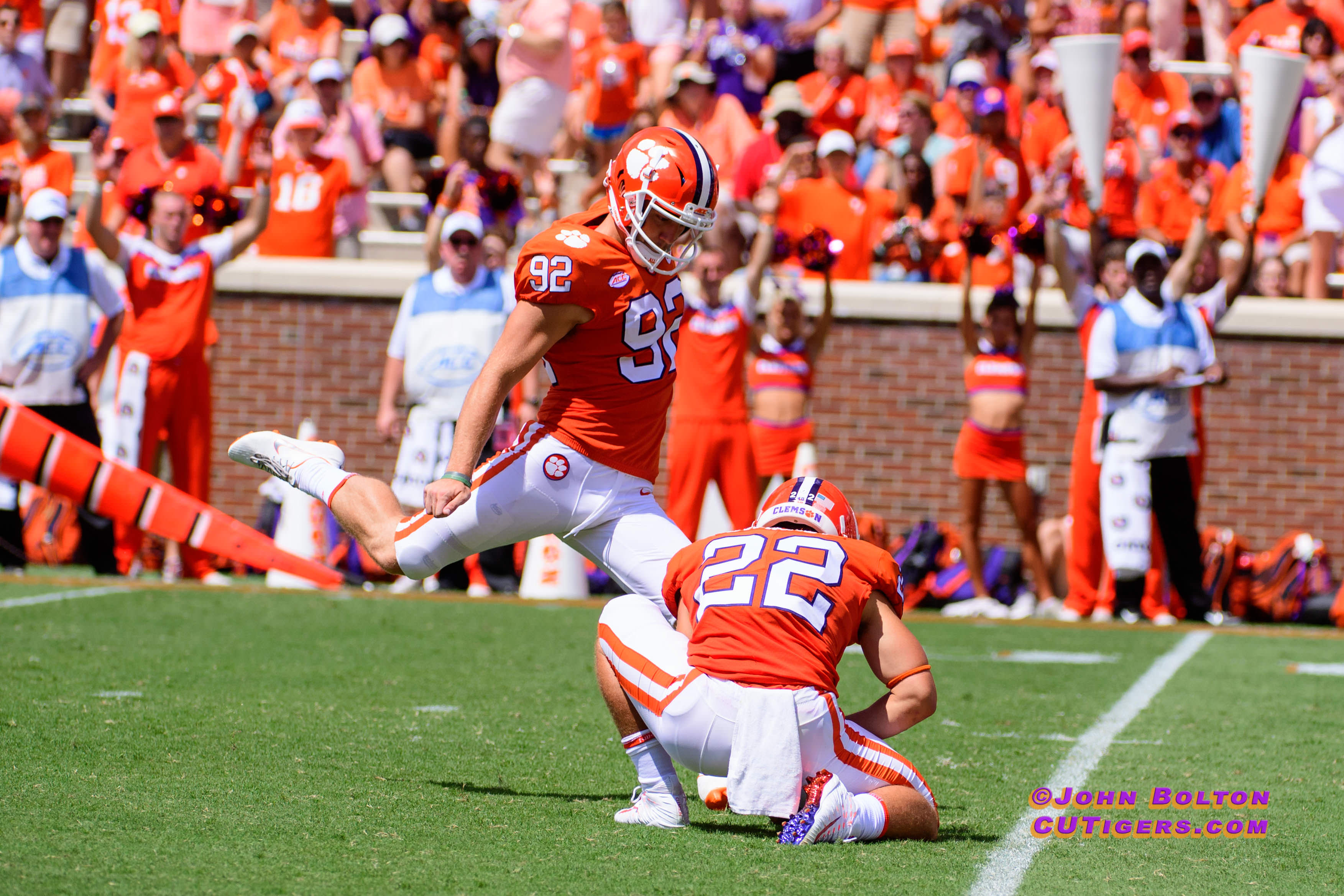 And not to be outdone, special teams were also outstanding! In his first game back since tearing the ACL in his kicking leg, Greg Huegel was 2-2 on field goals, including a career-long 49-yarder. His previous long was 47 yards at Louisville early last season. Meanwhile, true freshman BT Potter put on a show on kickoffs, booting all 6 of his kickoffs into or out of the end zone for touch backs. Steven Sawicki was also 2-2 on touchbacks! Not many people get excited about kickoffs or special teams, but it cannot be overstated how often they determine the outcome of games and championships. To wit, imagine if Potter had been on the 2015 Clemson team. Instead of giving up a touchdown on a kickoff return, the Tigers would have won back-to-back national championships! And the Tigers didn’t just excel in the kicking game on Saturday. They also saw a 62-yard punt return by Amari Rodgers and a 43-kyard kickoff return by Cornell Powell. The only hiccup on special teams was a Will Spiers punt that was allowed to bounce into the end zone. Tanner Muse was in position to catch or down the punt inside the 5, but he was unable to find the football. 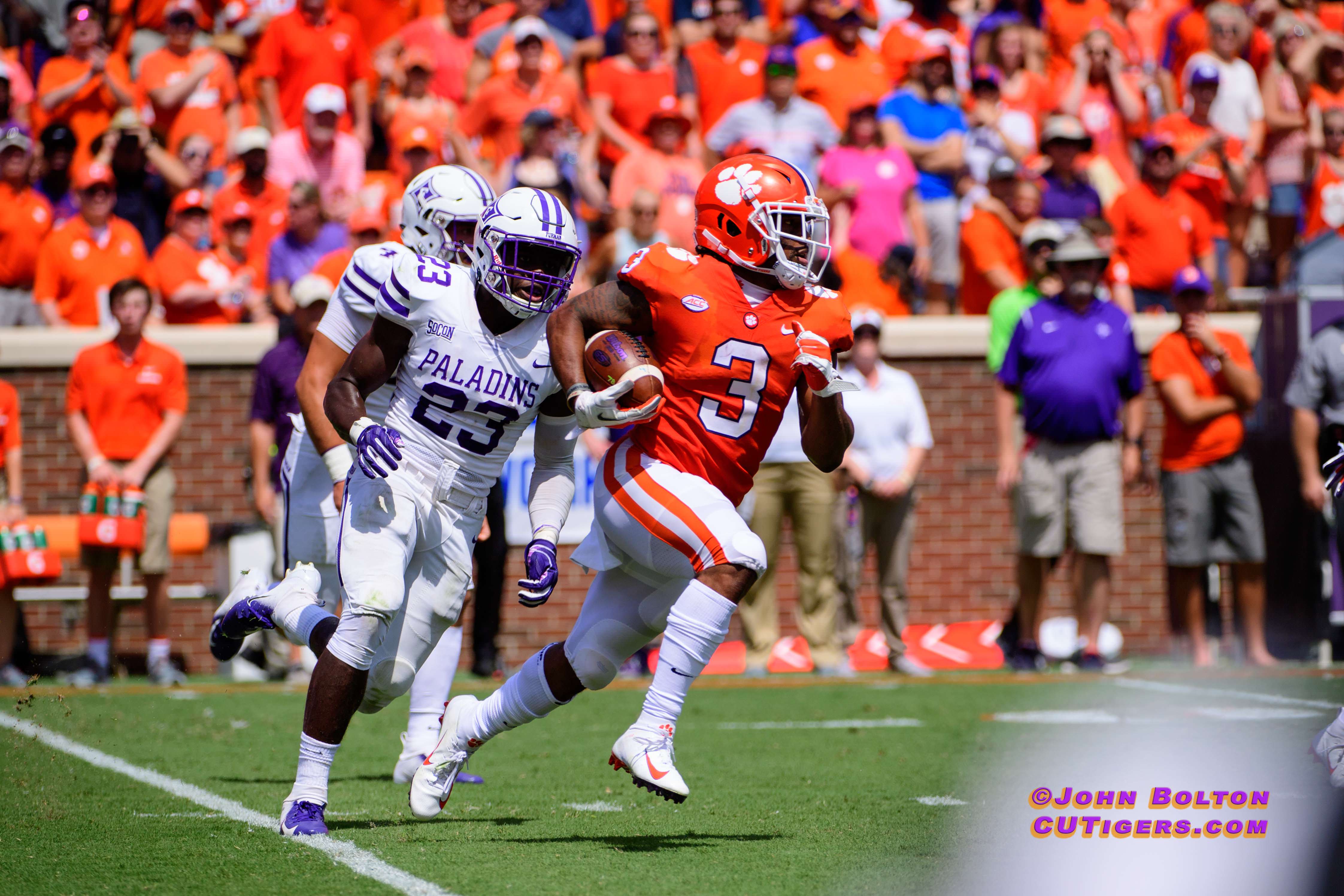 The story of the game had to be the freshmen and redshirt freshmen that made big plays, which includes Trevor Lawrence. Ballyhooed true freshman WR Justyn Ross—the #1 player in the state of Alabama last year—scored a touchdown on his very first catch. True freshman Braden Galloway, a basketball player converted to tight end, also scored a touchdown in his debut. True freshman WR Derion Kendrick also got into the act, making a 38-yard catch. Meanwhile, Lyn-J Dixon stormed out of the gates, showing us why the coaches were raving about him all August. He ran for 12 yards on his first carry and then broke a 60-yard run on the next play, nearly taking it all the way for a touchdown before he was caught from behind by a cornerback. Dabo told us weeks ago that Dixon is ahead of where Etienne was as a true freshman last year—which was very high praise and surprising to most—and it didn’t take Dixon long to prove his coach accurate. There were also freshmen making plays on the defensive side. Redshirt freshman Baylon Spector forced and recovered a fumble, and true freshman KJ Henry also recovered a fumble. Several other freshmen like Jordan Williams, Xavier Thomas, Jackson Carman and Kyler McMichael also saw significant playing time. And I’ve already covered BT Potter’s contribution in the kicking game. 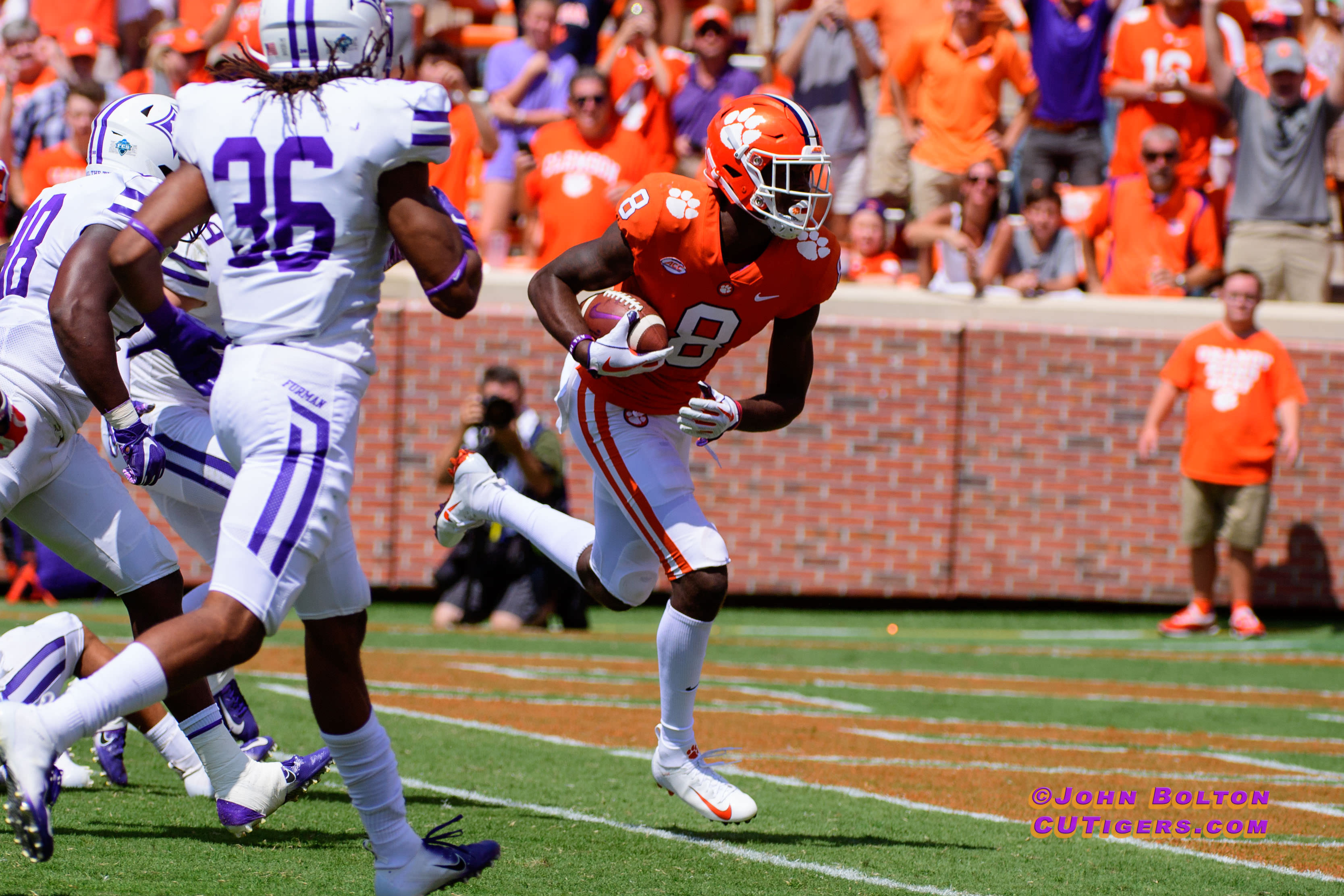 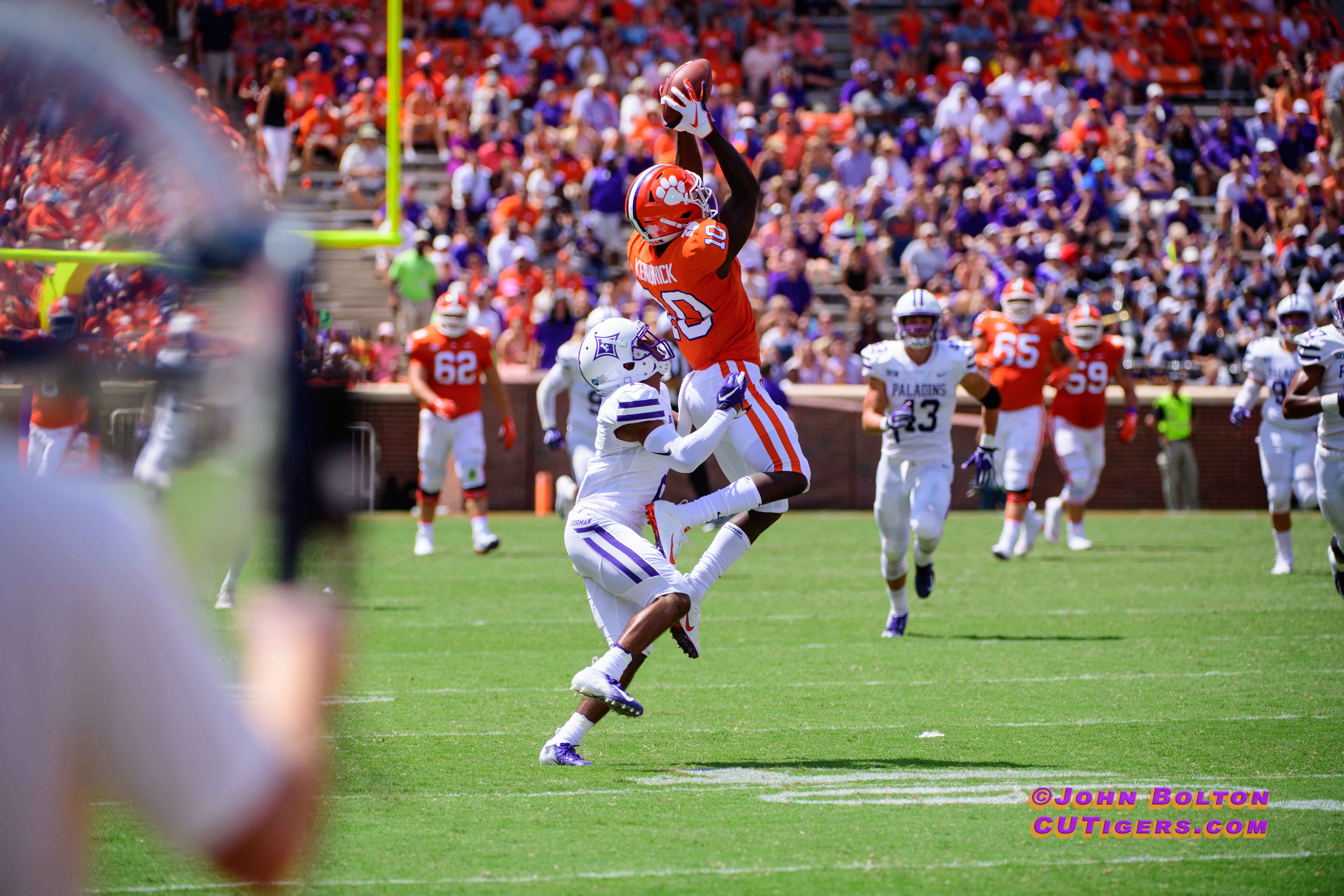 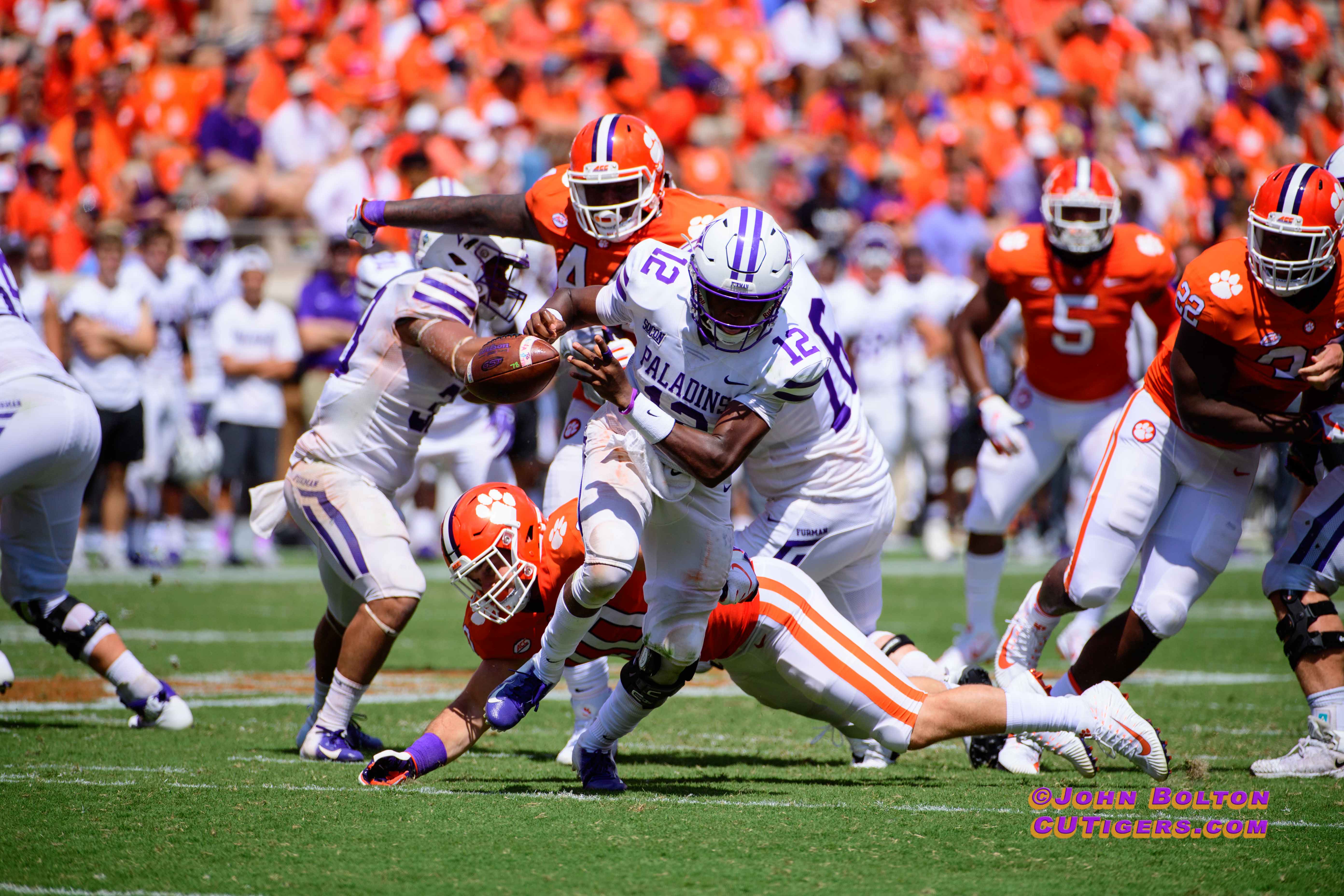 The takeaway from the season opener is that Clemson is the most complete team in the nation, which means you are going to see a lot of lopsided sores like this one. The Tigers simply do not have a weakness in my opinion. Consequently, the quarterback question will continue to be unclear for quite some time. As Trevor Lawrence continues to get better and improves his understanding of the offense, will Dabo make him the starter, even if Kelly Bryant continues to play well and lead the Tigers to blowout wins? My guess will be no. I believe we will continue to see what we saw on Saturday—the two quarterbacks flip-flopping every 2 or 3 series. That type of practice shouldn’t be a problem when the Tigers are putting teams away early, but what will happen if they find themselves in a dog fight on the road—something that could very well happen next week at Texas A&M? Will the time-sharing be a detriment? Will it prevent either of the quarterbacks from finding a rhythm? That remains to be seen. It’s a good problem to have, but it’s a dilemma nonetheless. As I wrote last week, the Tigers find themselves in the exact same situation Alabama was in last year: a returning starter and proven winner versus a talented freshman who makes the offense better and is clearly the future. Will Dabo’s hand be forced at any point during the season, the way Saban’s was in the second half of the National Championship Game? That will be something to keep an eye on all season long!

INJURY REPORT:  Jordan Williams (knee) and Chad Smith (shoulder) left the game shaken up, but Dabo told us after the game that he had not received any injury news from team physician Danny Poole. We will have an update when we talk to Dabo on Sunday evening.